How did people in the USSR poke fun at the Revolution leaders? 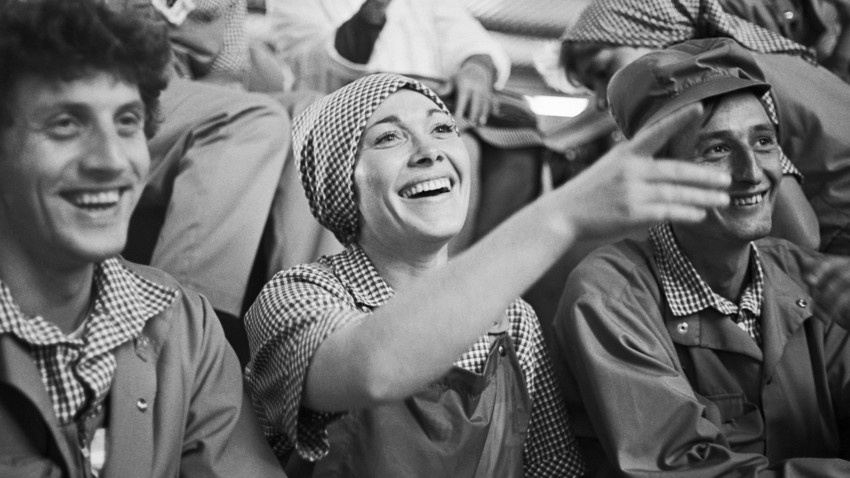 Boris Klipinitser/TASS
The jokes that made the Russian sense of humor braver than any other.

The years that followed the October Revolution of 1917 were not a natural time for jokes – however, it didn’t stop Russians from telling them. In spite of the Civil War, repressions and a paranoid atmosphere that could bring fatal consequences to anyone who told the wrong joke, Russian political satire persevered. A hundred years on, Russia Beyond commemorates the best and bravest jokes told by Russians about their (usually) sacrosanct revolutionary leaders.

As a passionate communist intellectual, the Revolution’s great hero Vladimir Lenin was typically portrayed in jokes as deeply serious and blinkered by his ideological fervor. To capture this, many Revolution jokes involved fictional conversations between Lenin and the fanatical Cheka (secret police) leader “Iron” Felix Dzerzhinsky. The fact Dzerzhinsky, the “professional revolutionary,” always came out on the wrong side of Lenin’s ideological zeal mocks Lenin’s cutthroat approach to communism and inability to be satisfied:

“Felix, for the sake of the Revolution, would you jump out that window?

“Of course,” replies Dzerzhinsky, and jumps out the window.

Lenin goes down the stairs, goes out into the street, and looks at Dzerzhinsky lying on the ground, unimpressed.

As the Revolution’s key figurehead, Lenin also took the rap for any ideological shortcomings of Soviet communism. For example:

“Well, Felix Edmundovich, tell me please, do you have hairy legs?”

“Good. Well, then you won’t be needing a winter coat.”

Drawing from the theme of scarcity, it was also popular in Soviet times to take a satirical angle on the ever-growing list of ideological mantras that often pervaded regular conversation. This joke, for example, suggests the revolutionary slogans got as far as the Chukchi communities in the far northeast of Siberia, who continued to suffer in severe conditions after the Revolution, just as they had done before:

A Chukchi representative stands before Congress.

“Comrades! Before the great October Socialist Revolution, we, the Chukchi, had experienced two feelings: hunger and coldness. Now we experience three feelings: hunger, coldness and a sense of deep satisfaction!”

Although the creation of the “cult of personality” is usually attributed to Stalin, revolutionary symbolism always remained a key feature in the Soviet aesthetic, with Lenin receiving worship in equal proportion. Even though Soviet citizens could get in trouble for telling jokes, many were brave enough to make fun of the Supreme Chairman himself and his omnipresence in Soviet society, even long after his death. This joke, for example, gives a double meaning to Tolstoy’s play ‘The Living Corpse’:

Today we’re going to the theater to see “The Living Corpse!"

I’m sick of it, everything’s always about Lenin!

This joke also hinted at the severe consequences of merely making fun of Lenin, despite him being dead a long time...

At the contest for the best political joke in honor of Lenin’s birthday:

1st prize — a meeting with the man himself

…While other jokes were quick to point out how Stalin took inspiration from Lenin’s ferocity:

A dying Lenin calls Stalin over to him.

“I’m very worried,” he says, “will the people follow you?”

“They will,” responds Stalin, “they surely will.”

However, as Soviet censorship became less strict toward the end of the country’s lifespan, and forms of minor dissidence such as Brezhnev jokes became commonplace, the prospect of the revolutionary cult became less threatening in the eyes of the average Russian. In turn, jokes about Revolution leaders became much sillier. For example, this one took a satirical angle on the growing popularity of contraband Western music in Soviet music, daring to suggest that it had even become more popular than the Revolution itself:

“The Revolution has been accomplished! I now give you Comrade Lenin!”

Lenin: “Well, to hell with it, here's "Yesterday!”