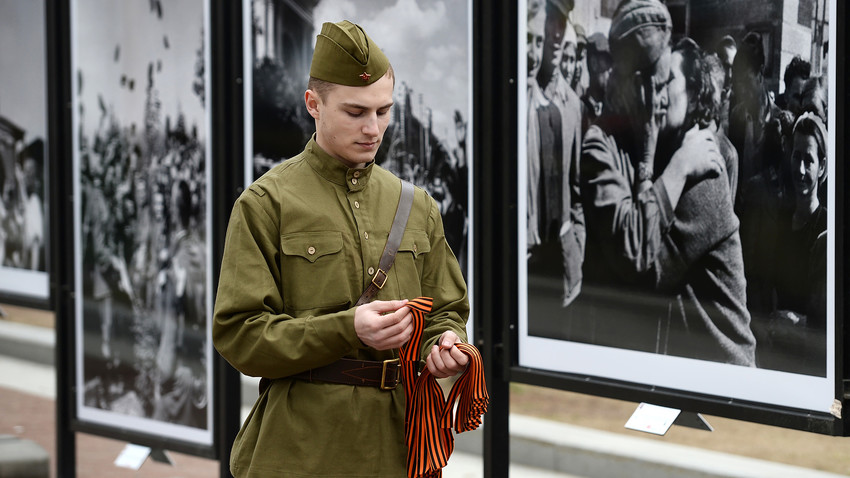 Every year on the eve of the Victory Day, May 9, millions of St. George’s ribbons are distributed in Russia and also in other countries

Maksim Blinov/Sputnik
St. George’s ribbon in Russia has become a universal symbol of remembrance of those who fell in WWII just like the poppy in the UK in the case of WWI victims. Several years ago, it all started as a local initiative. How has it turned into a nationwide symbol?

“St. George’s Ribbon was invented by journalists. Perhaps, it is not accidental – we feel with our finger-pads the contemporary history and the state of society,” journalist Natalya Loseva who came up with the idea of the ribbon in 2005, said in an interview. This was how she tried to explain the huge popularity of orange-black ribbons that became the symbol of Russia’s efforts in the war.

The orange-black ribbon has become immensely popular. Every year on the eve of the Victory Day, May 9, millions of St. George’s ribbons are distributed in Russia and also in other countries. Russia’s highest officials wear the ribbons, including President Putin.

However, 13 years ago it all started as a local, grassroots initiative by a group of journalists at state news agency RIA who made an Internet-project Our Victory with personal stories of people touched by the war. Only , when the action was gaining momentum did authorities take notice, Loseva claims.

She explained later what the journalists felt “with their finger-pads” before launching the initiative. According to her, the popularity of the ribbon became a reaction to the nihilism of the previous epoch that followed the dissolution of the Soviet Union. 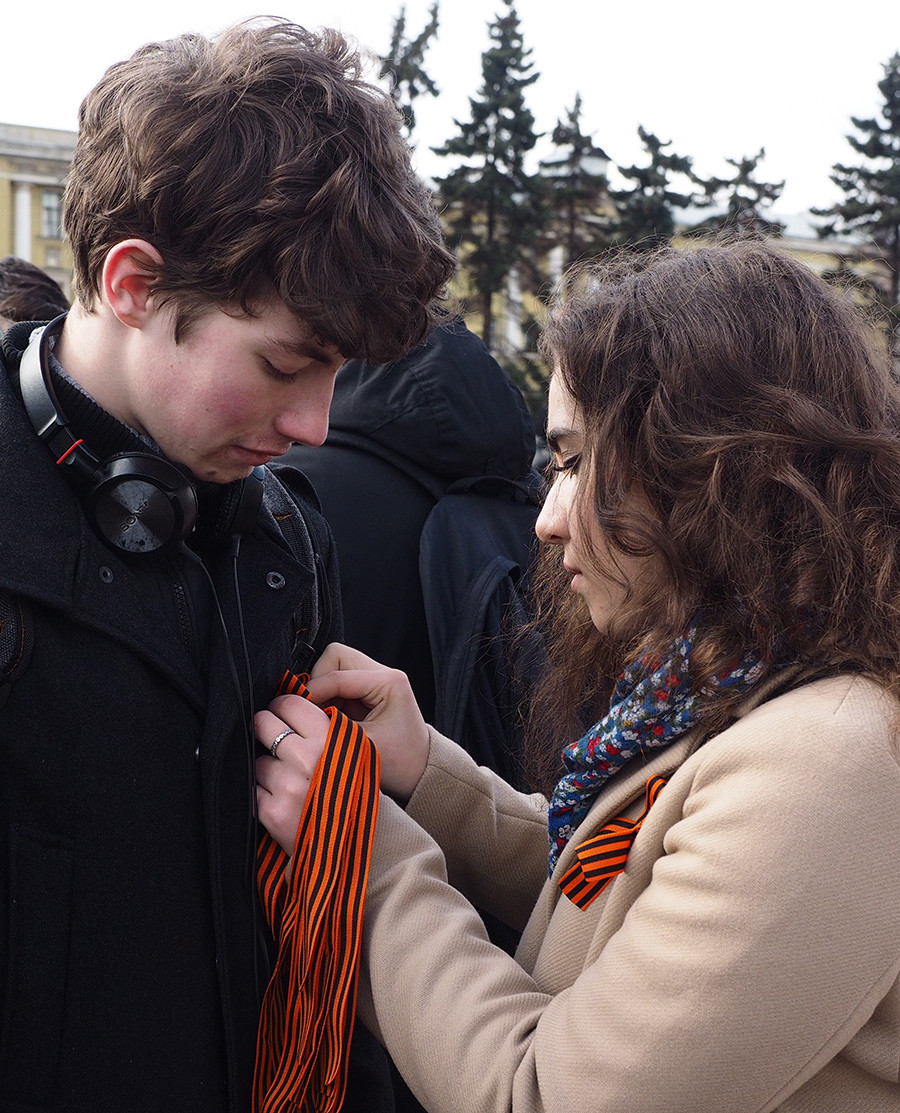 St. George’s ribbon in Russia has become a universal symbol of remembrance of those fallen in WWII

“For some time we experienced a period of rejection, resentment [towards the Soviet past]. Society wanted to write off the outcome of the Great Patriotic War and WWII together with the burden of the Soviet past, together with the stagnation, iron curtain, and poverty. … But, you know, it is difficult for a society to be healthy without emotional and historic pillars to lean on. The deficit of self-respect makes people miserable and immature. In general, it seems the ribbon filled the niche of healthy pride” (in Russians). Ribbons have been distributed under the slogan “I remember. I am proud.”

No Oder of St. George during WWII

The popularity of the symbol did not help the ribbon to avoid bitter criticism from some who saw a political agenda behind the initiative. Some members of the Communist Party (still popular in Russia) started to rebuke the project for an alleged wish to get rid of victory symbols that are connected with communism, like the red banner under which the war was won. It was claimed that “St. George’s ribbon does not have anything to do neither with the Great Patriotic War [as WWII is often called in Russia] nor with the Soviet period at all” (in Russian). And as such the initiative was allegedly aimed at the Communists.

Indeed, St. George’s ribbon was a part of the Order of St. George (the colors represented gunpowder and fire), the highest military award introduced in the time of Empress Catherine the Great in the 18th century and abolished after the Revolution in 1917. From a strictly formal point of view, St. George’s ribbon did not exist during WWII and was revived only in 2000, when the order itself was re-introduced in Russia.

However, not everything here is that simple. During the war, from 1942, there existed a ribbon of the same colors that was named the Guards ribbon. The same colors were used for the Order of Glory that was established in 1943 and with which more than a million rank-and-file soldiers were awarded. They say that this Soviet order and its colors were in direct reference to the Imperial Order of St. George. It is true that during the course of the war Soviet authorities started bringing back some symbolic elements from the Russian Imperial army.

The medal that almost all the soldiers received – “For the Victory over Germany” – had the stripes of St. George’s colors too. After the war, the ribbon and its colors were popular elements on Soviet posters and postcards as one can see here. So, one might say that it is only by its name that the ribbon differs now compared to the war years. 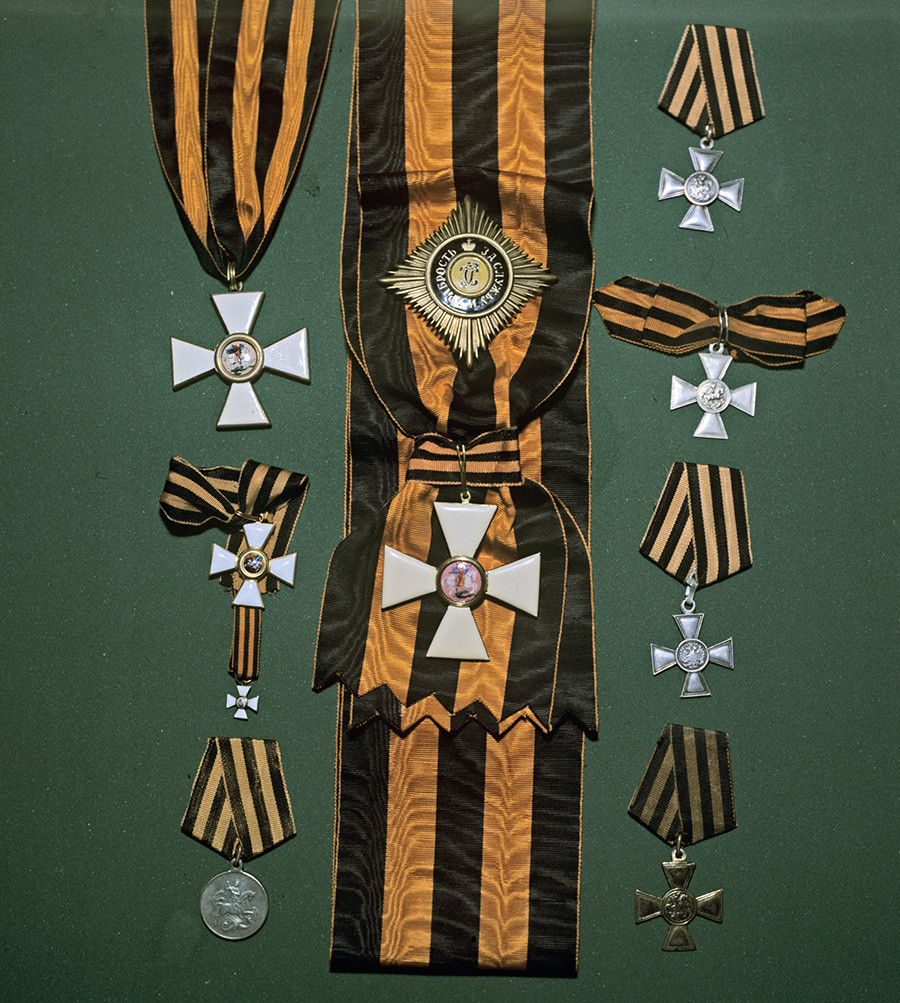 St. George’s ribbon was a part of the Order of St. George, the highest military award introduced in the time of Empress Catherine the Great

There have also been suspicions that the ribbon was established by Russian authorities in a response to the Orange Revolution of 2004 in Ukraine, whose supporters had ribbons of their own. “The Orange revolution had an orange ribbon, and St. George’s one – black and orange. We are clearly dealing with PR plagiarism here,” one columnist wrote (in Russian). At the same time even for The Washington Post, a newspaper that is hard to blame for its excessive loyalty towards the Kremlin, it “seemed untrue.” Later, in the course of the Ukrainian the ribbon was chosen by those who opposed the new government in Kiev and St. George’s ribbon was officially banned in Ukraine.

At the same time, the ribbon’s inventor says that the “project is apolitical and is directed towards historical memory.  ...If a local action has become a popular tradition it would be desirable that its initial purpose is not lost - experiencing personal family history in the context of WWII” (in Russian). In the end, even the Pope put the ribbon on himself once, although as the Vatican later explained, Francis did not know what it was (in Russian).