Before and after: How Moscow looked in the 19th century and today (PHOTOS) 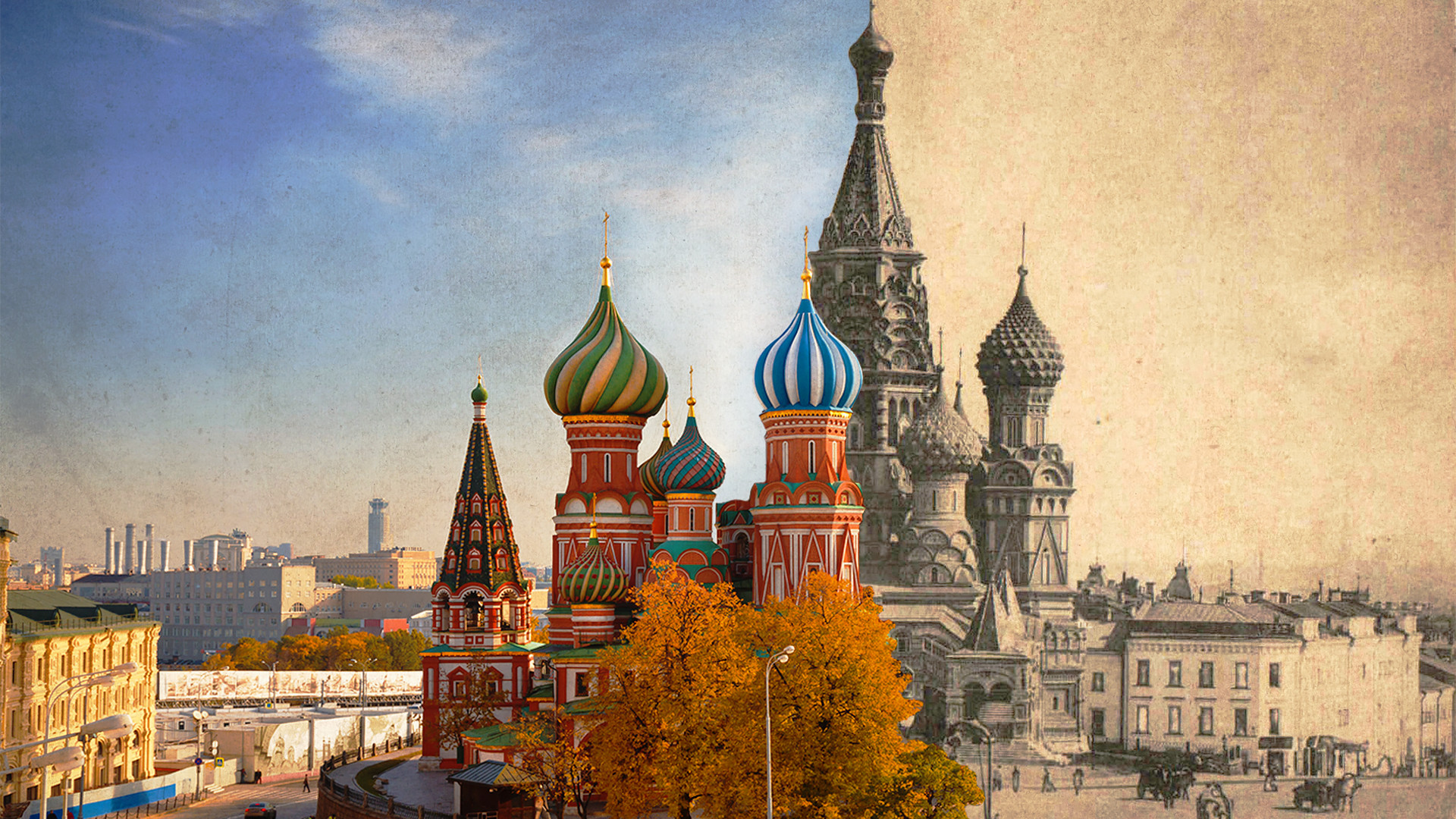 pixabay; Archive Photo
Where today is a modern bridge once stood an old wooden one; and a Soviet-era square was once full of Orthodox churches. Russia’s capital changes with each passing decade. Let’s compare photos from the 1860s-1900s with contemporary views of the same places.

1. The Kremlin as seen from across the Moskva River, 1866 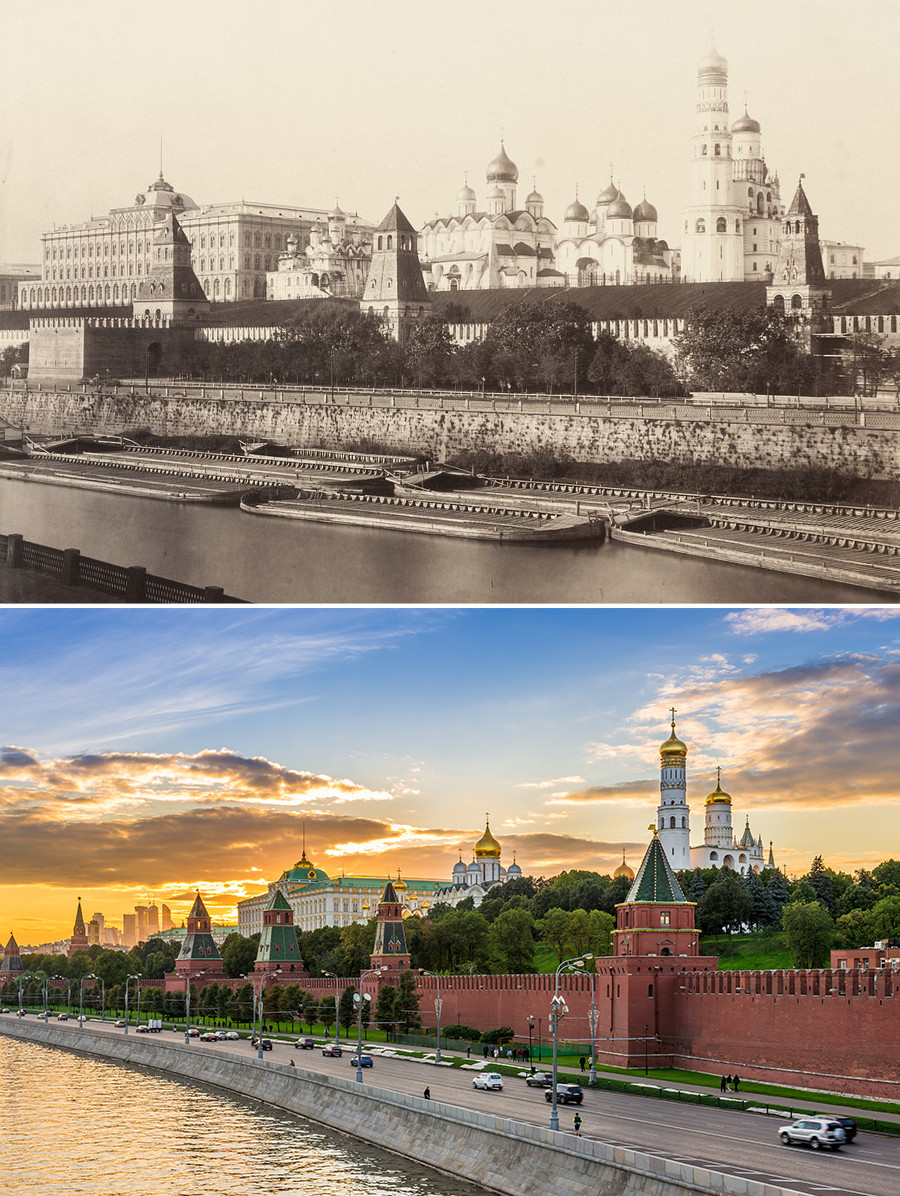 This image was a gift album to Maria Feodorovna (Dagmar of Denmark), wife of Alexander III and mother of Nicholas II.

Though the Kremlin's buildings, especially Orthodox churches, suffered much at the hands of the Bolsheviks, this area has changed little since that time.

2. Voskresenskaya Square and Chapel of Iverskaya Icon of The Mother of God, 1900s 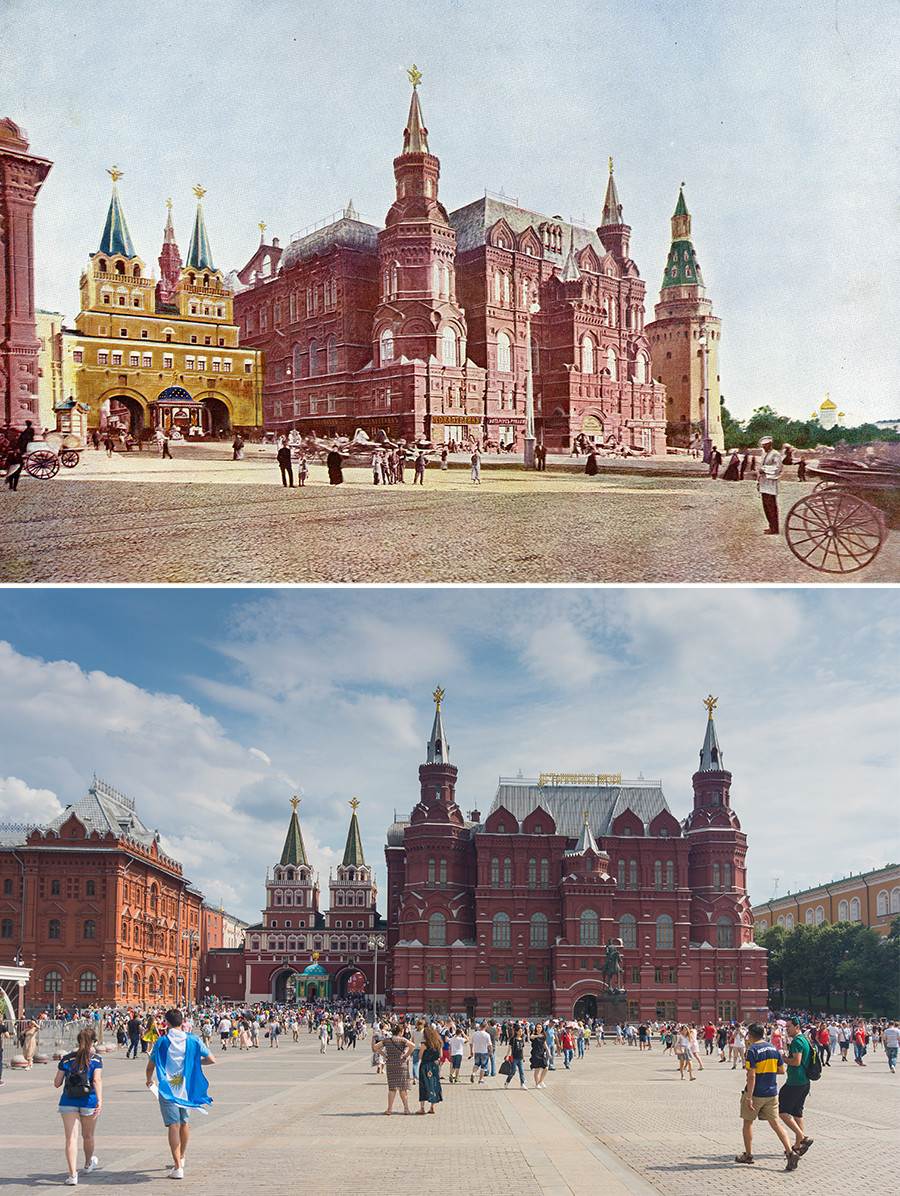 This place is now called the Square of the Revolution, and the red building is the State Historical Museum.

This is Moscow's zero mile marker. Throw a coin in for good luck. In 1995, an equestrian statue to World War II hero Marshal Zhukov was erected here. 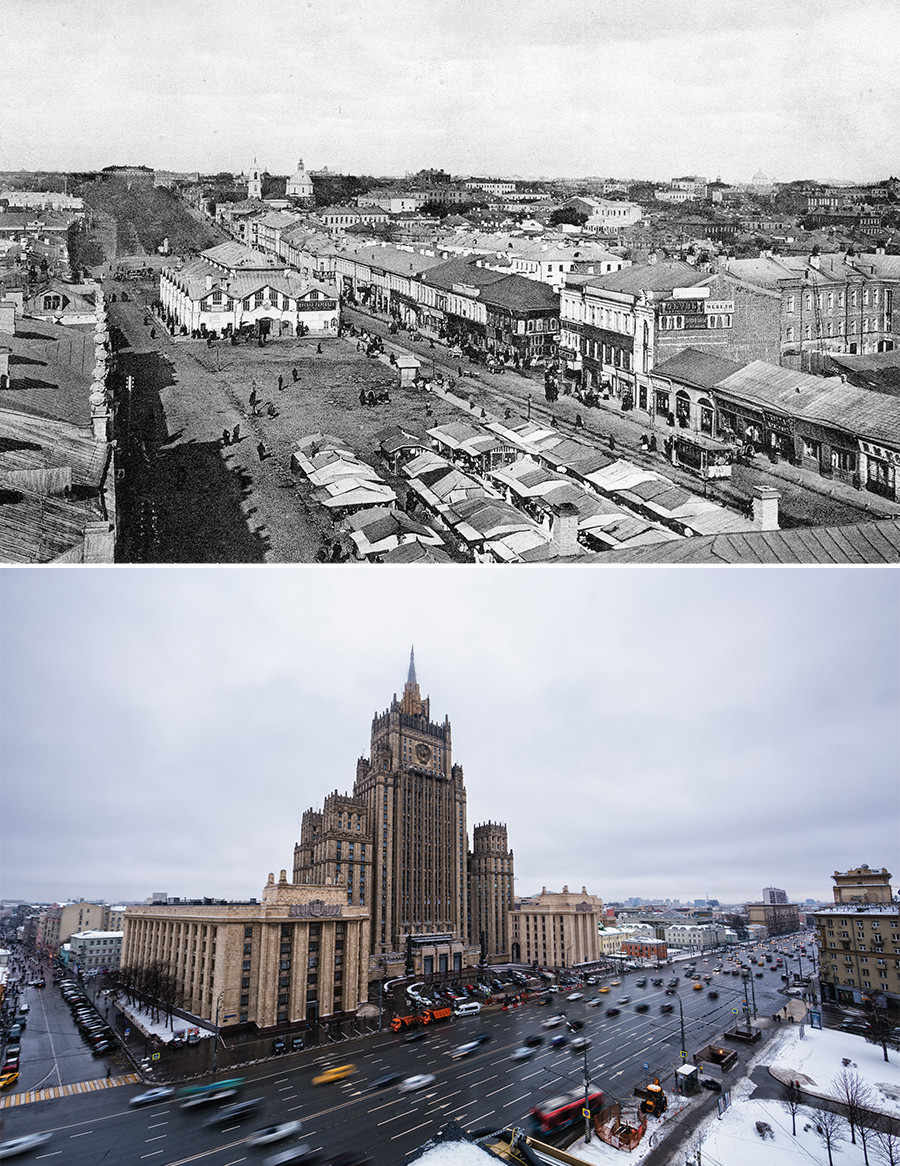 This was a spontaneous market on the crossroads of Arbat Street and Old Smolensky Tract, which led to the city of Smolensk.

Now, a Stalin-era skyscraper (Ministry of Foreign Affairs) stands here, as well as the wide avenue of the Garden Ring. Commerce is still conducted here, and there are many business offices nearby. 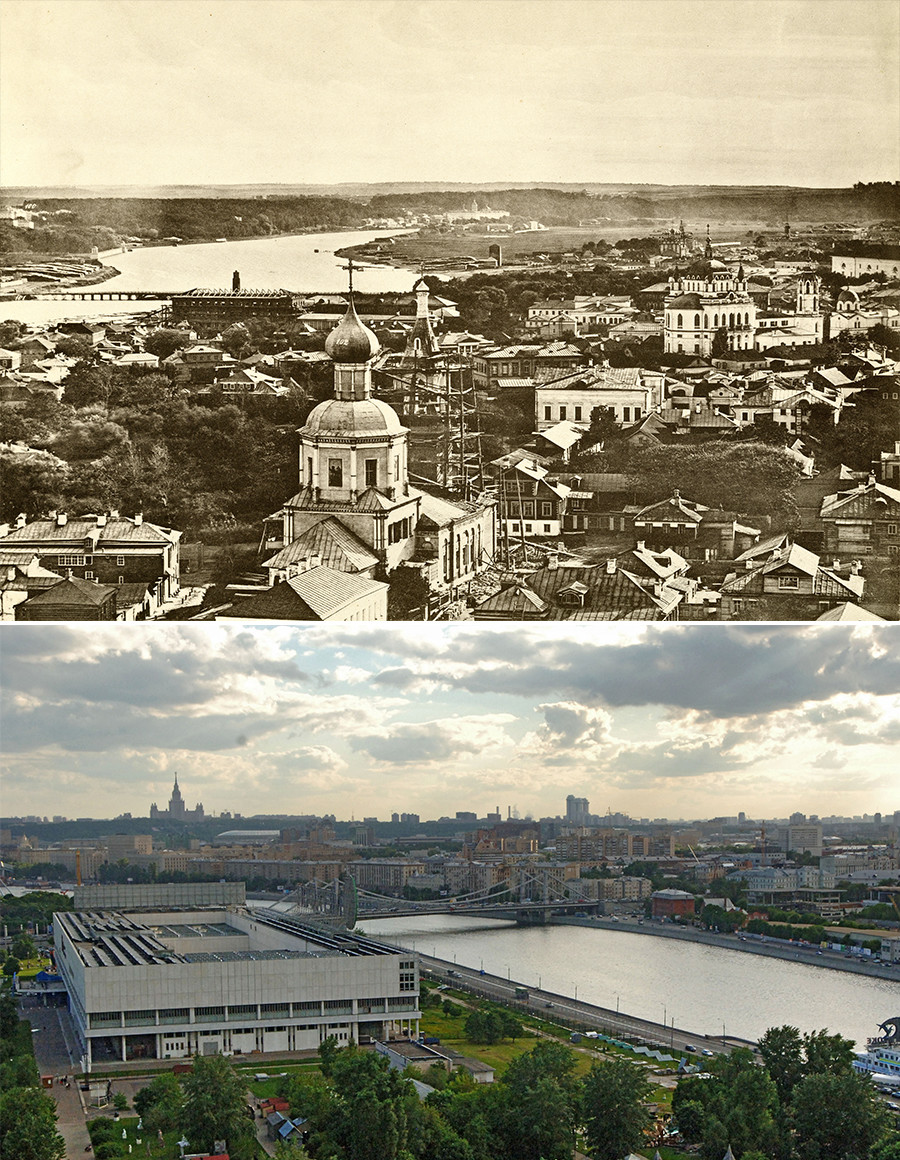 This photo was made 50 years ago, and today’s popular Gorky Park was opened on the forested side of the Moskva River. Also, notice that Krymsky Bridge is missing.

Zachatyevsky Monastery is now scrunched between office and residential buildings.

On the other side of the river is the New Tretyakov Gallery. 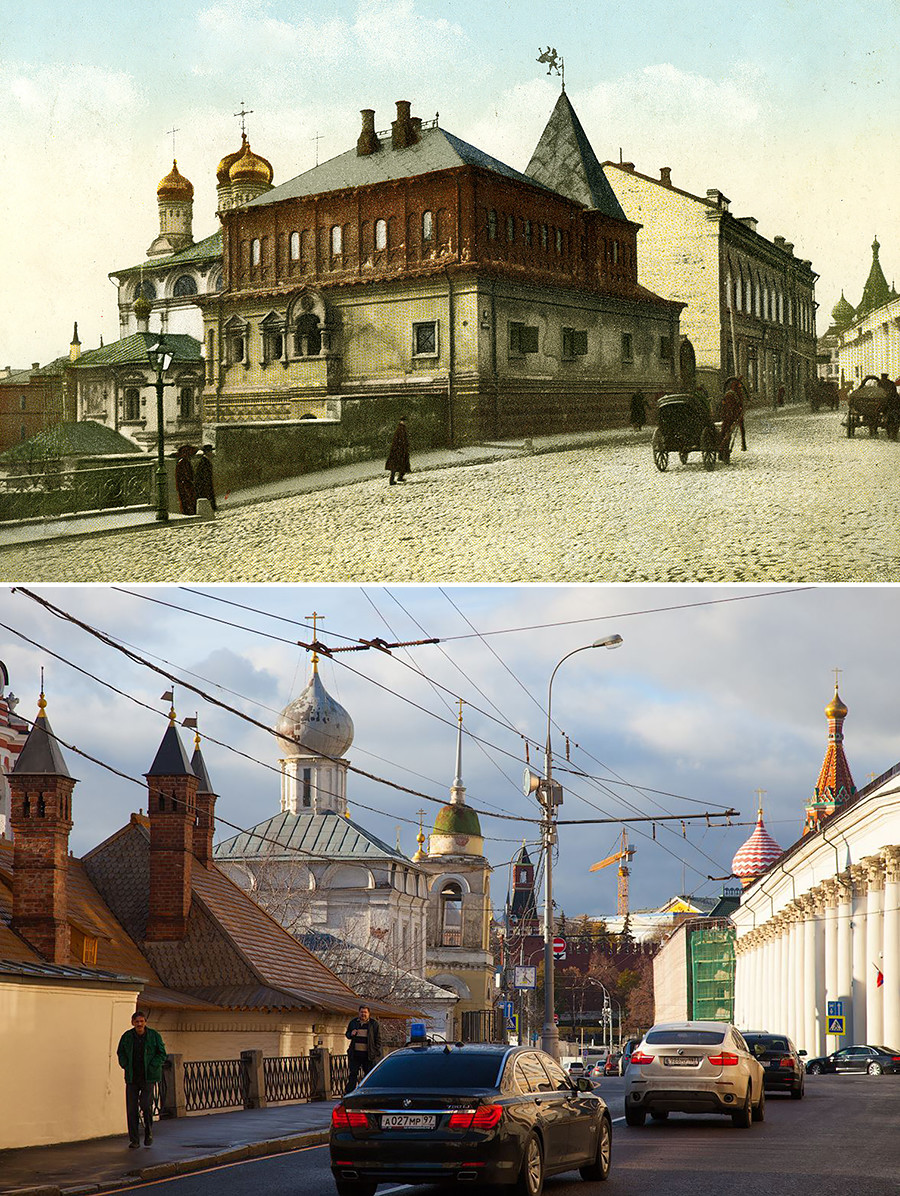 this medieval house on Varvarka Street, close to the Kremlin, the first tsar of the Romanov dynasty - Mikhail - was born in 1596.

Today, this ‘palace’ still stands, surrounded by medieval churches and the Old English Court that was built in the early 16th century. The street and the museums are next to the new Zaryadye Park. 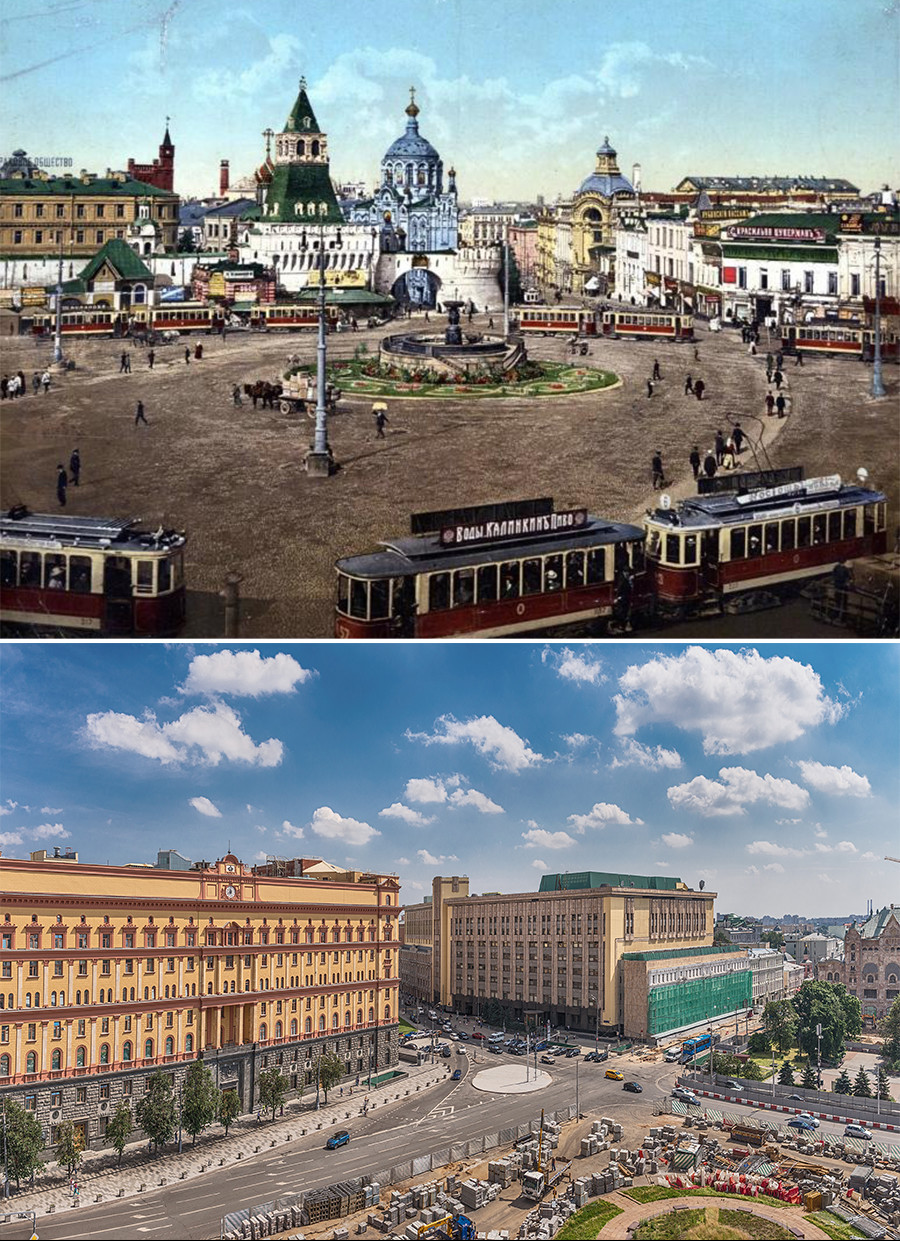 The medieval gates of Kitai-Gorod stood here long before Muscovites saw the appearance of the KGB building, which of course is a symbol of Stalinist repression and torture. Different stores occupied this area, and in the center of the square was a beautiful fountain made by a sculptor with Italian roots, Ivan Vitali.

In Soviet times, the fountain was moved to Neskuchny Garden, and a monument to the bloody KGB leader, Felix Dzerzhinsky, was erected instead. It was demolished in 1991, however, and now the spot is vacant. 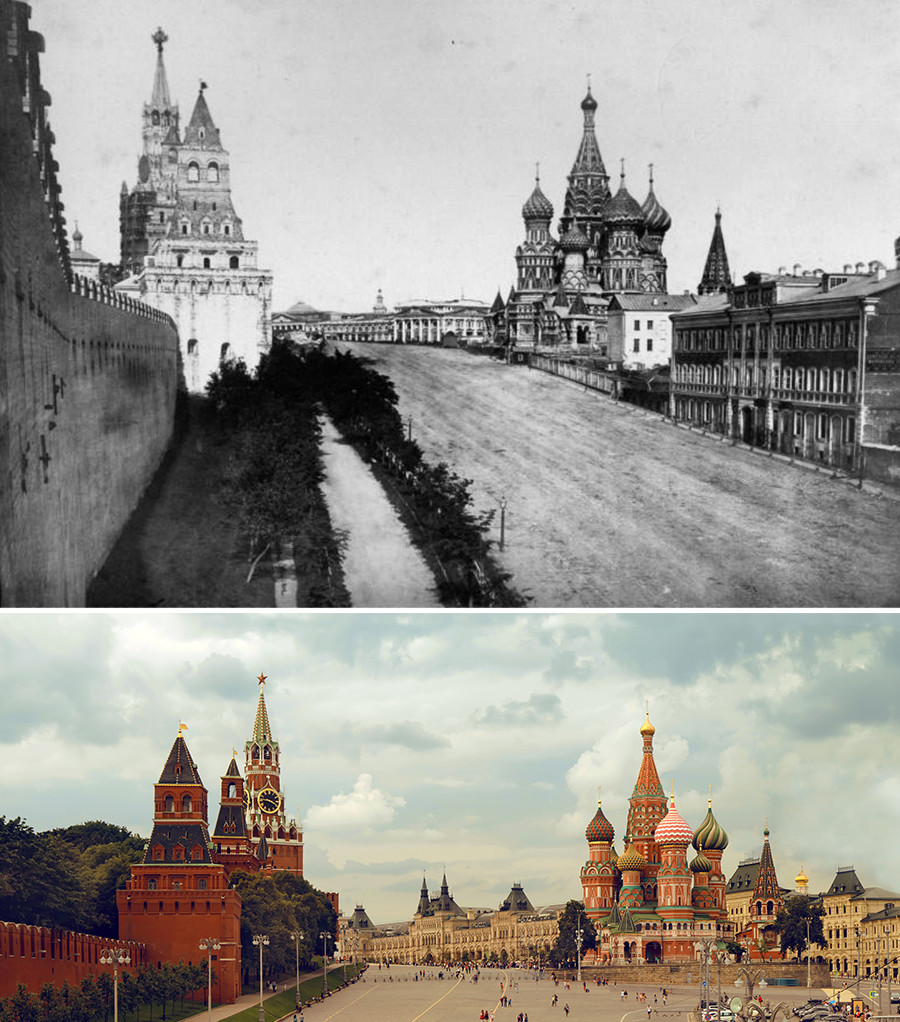 Erected by Ivan the Terrible in the mid-16th century in honor of the conquest of Kazan, it’s now one of the most recognizable symbols of Russia, not to mention Red Square’s pearl.

While the country’s main cathedral, Christ the Savior, was demolished by the Bolsheviks, this cathedral was spared. The street leading to Red Square is called Vasilevsky Descent and is now covered with cobblestones. Large outdoor concerts are held here from time. 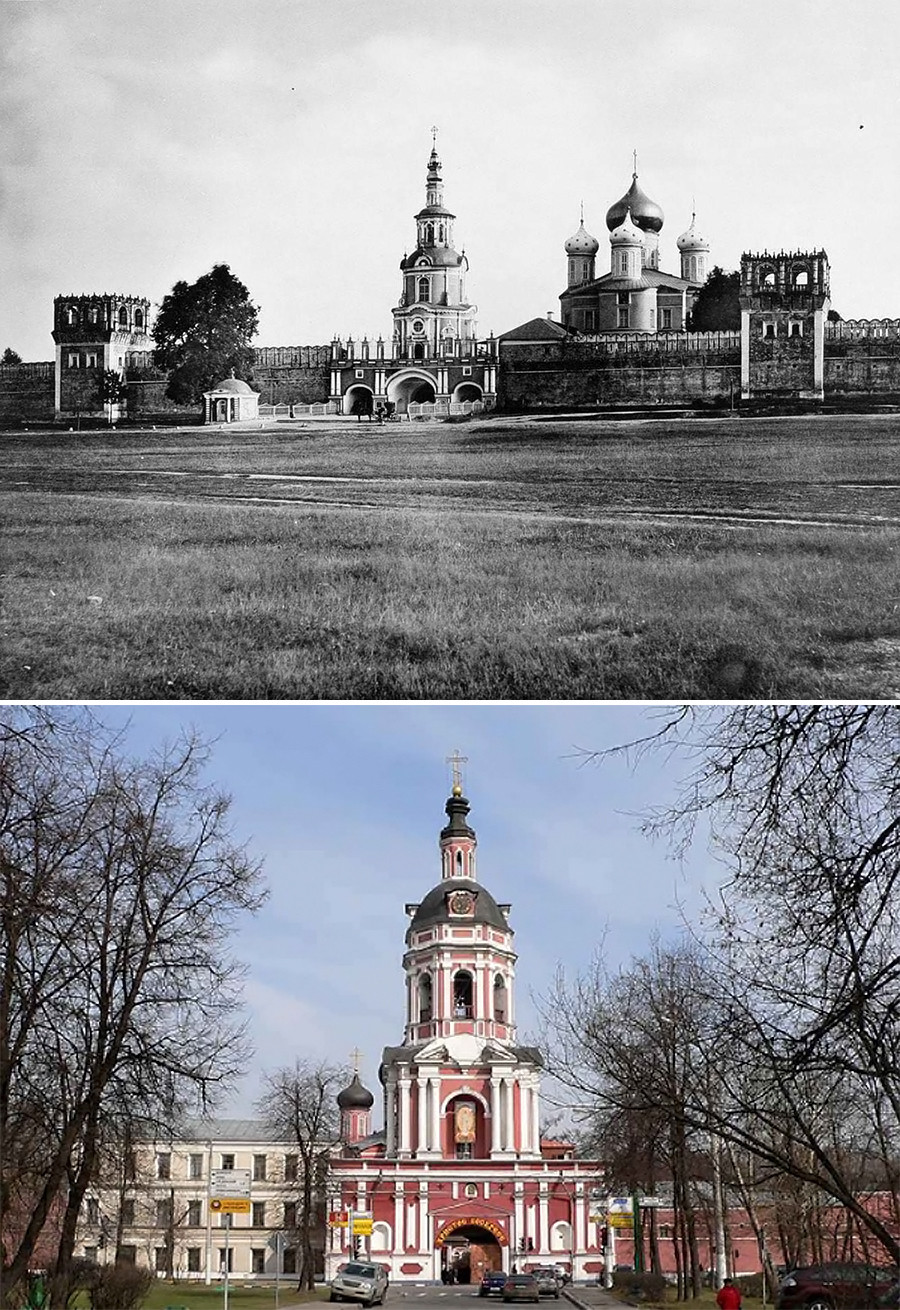 It was seen as a miracle when in the 16th century the Crimean khan with his formidable army retreated from the walls of Moscow. Donskoy Monastery was erected on the battlefield south of Moscow’s city limits at that time, but which is an area that’s now part of the city center.

In Soviet times, anti-religious art exhibitions were displayed instead of church services, which started again here only after Perestroika. 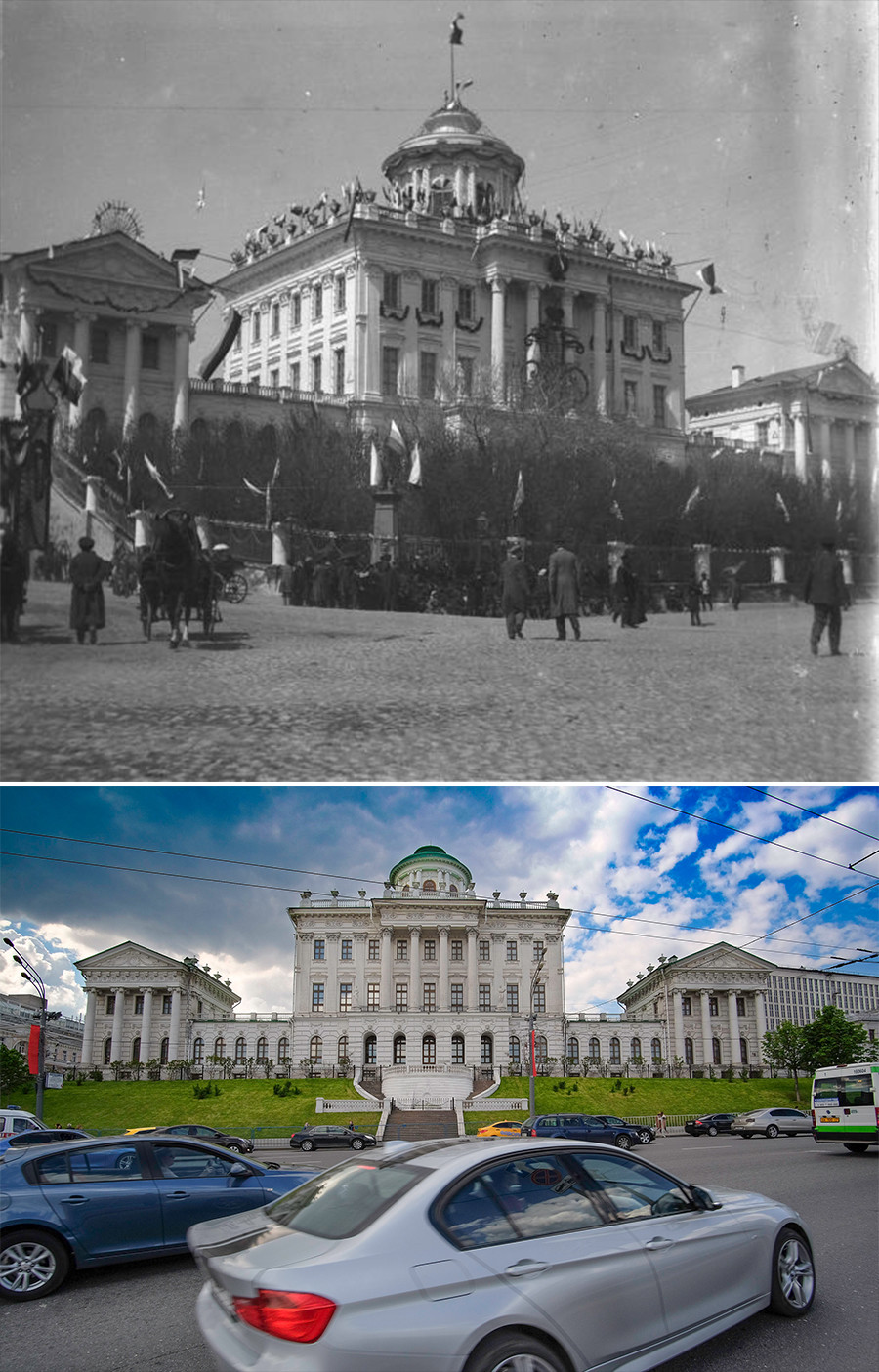 This photo was made during the coronation of Russia’s last tsar, Nicholas II. There was a big feast for the imperial court, and the city center was sumptuously decorated.

This is one of Moscow’s most gorgeous buildings, and it was the first site of the Russian State Library, the largest public library in the country. Rare manuscripts, sheet music maps are still stored here. 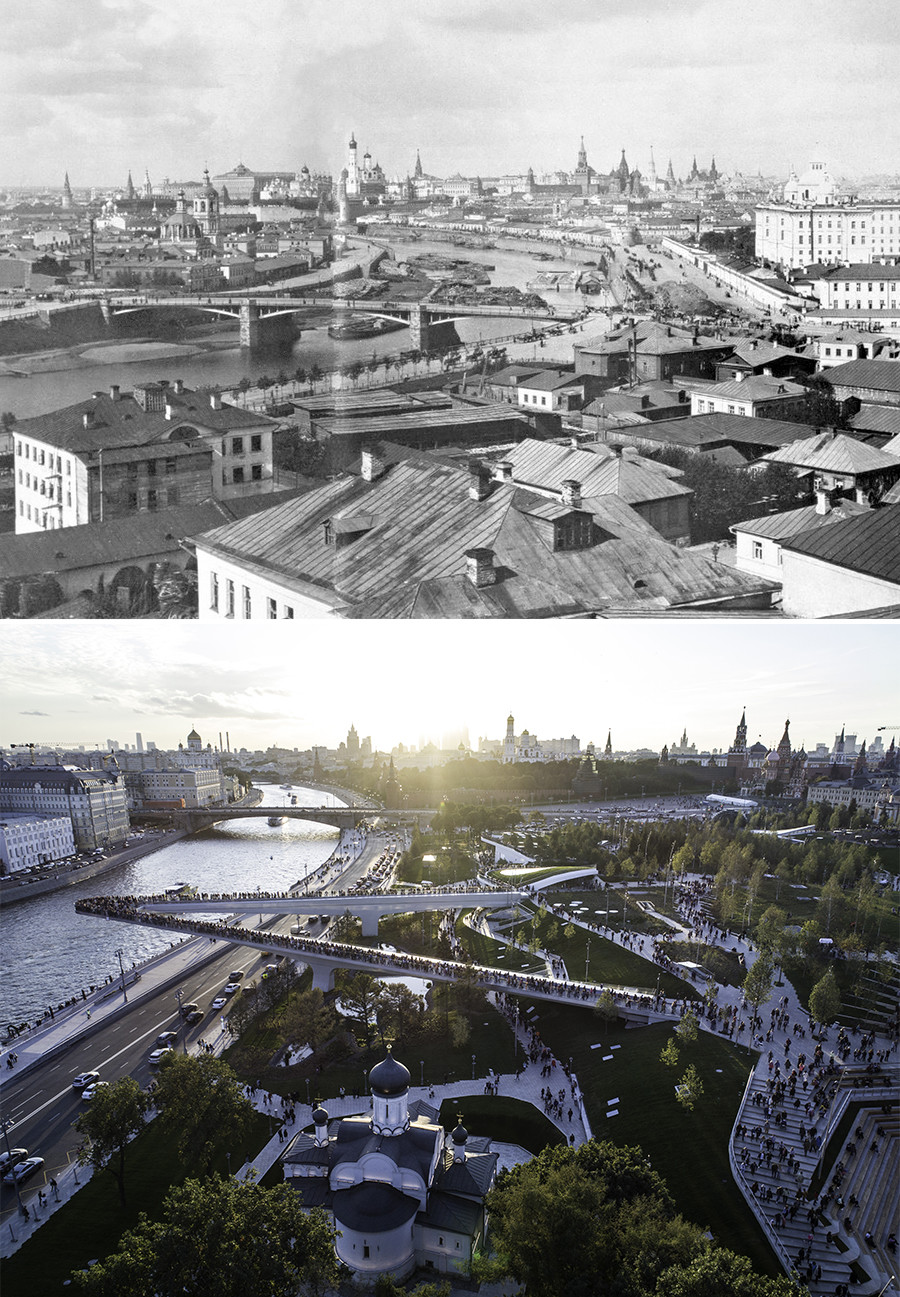 In the 20th century, the area around the Kremlin was built up. Inside, the communists built a new State Kremlin Palace, which is the only modern structure in the Kremlin, built for Party meetings.

From the 1960s and until 2006, in front of Red Square stood the massive Hotel Rossiya, which was demolished that year. For more than a decade , the area was a fenced-off construction site. In 2017, however, Zaryadye Park opened with its stunning floating bridge over the Moskva River.

From July 4 to August 13, 2018, the exhibition, “Moscow in Photographs from the 1860s to the early 1900s,” is on display at the State Russian Museum in St. Petersburg as part of the series, “Traveling around the Russian Empire.”