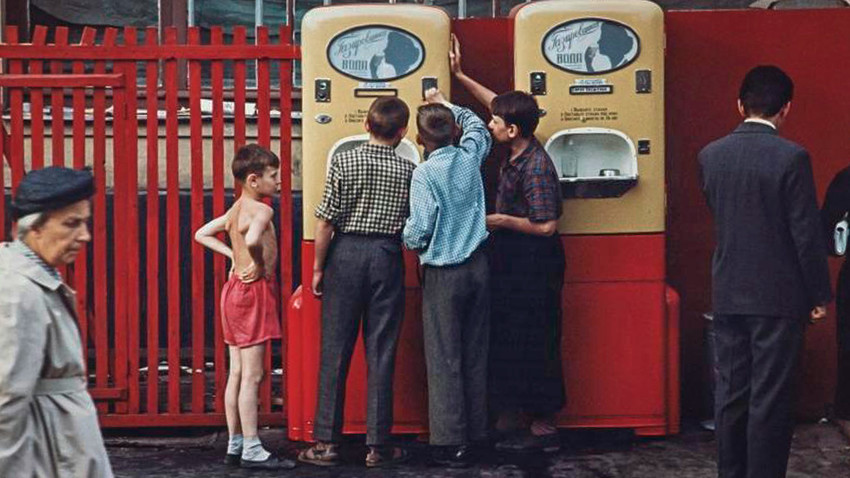 Dmitry Baltermants / MAMM / MDF / russiainphoto.ru
Iconic Soviet soda pop machines used to gather massive lines, but only offered one or two drinking glasses. However, that didn’t seem to discourage anyone.

Vending machines will always remain one of the symbols of the Soviet era. They could be found in airports, train stations, hotels, movie theaters, shopping malls and often in the street. Many, to this day, remember the price, as well as the taste. Their popularity was phenomenal. But they had something that would look completely out of place today: they offered only one or two drinking glasses. 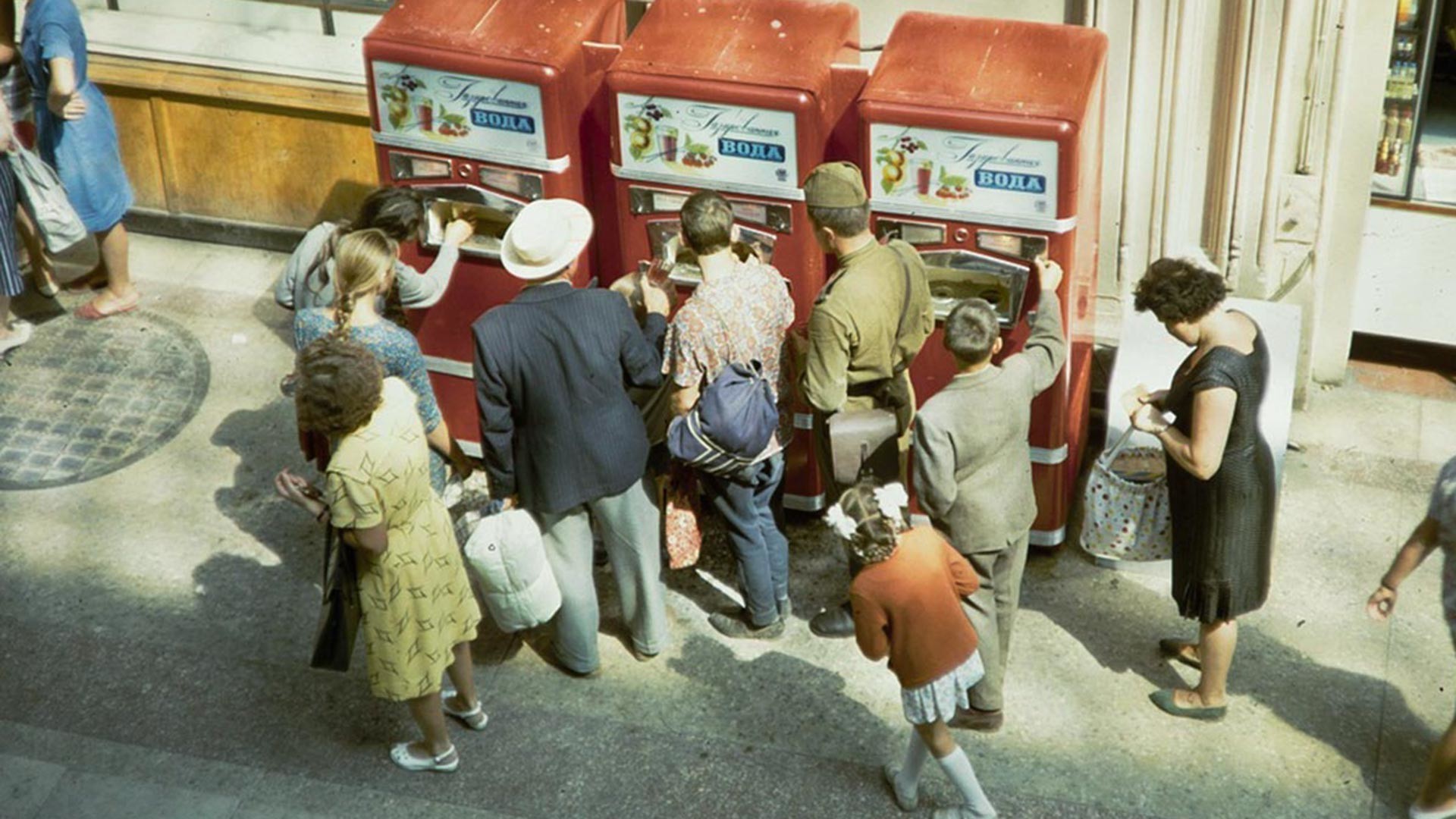 It’s believed that the first ‘vending machine’ in the Soviet Union was used in 1932: “A Leningrad-based ‘Vena’ factory worker, Agroshkin, has invented an interesting machine. Using it, every store can now carry out its own production of carbonated water,” read a story from ‘Vechernyaya Moskva’ (“Evening Moscow”). By the start of the 1960s, more than 10,000 of these had machines sprouted up all over Moscow.

The first machines gave out soda pop with syrup for 3 kopecks, or without for 1 kopeck. Your choice of syrup was ‘pear’, ‘barberry’, ‘tarkhun’ (tarragon), ‘cream-soda’, ‘kolokolchik’ (“bellflower”) and other flavors that either pointed to the original ingredient, or hid it behind a pretty name. In later years, Pepsi and Fanta joined the party, but were several times the price. 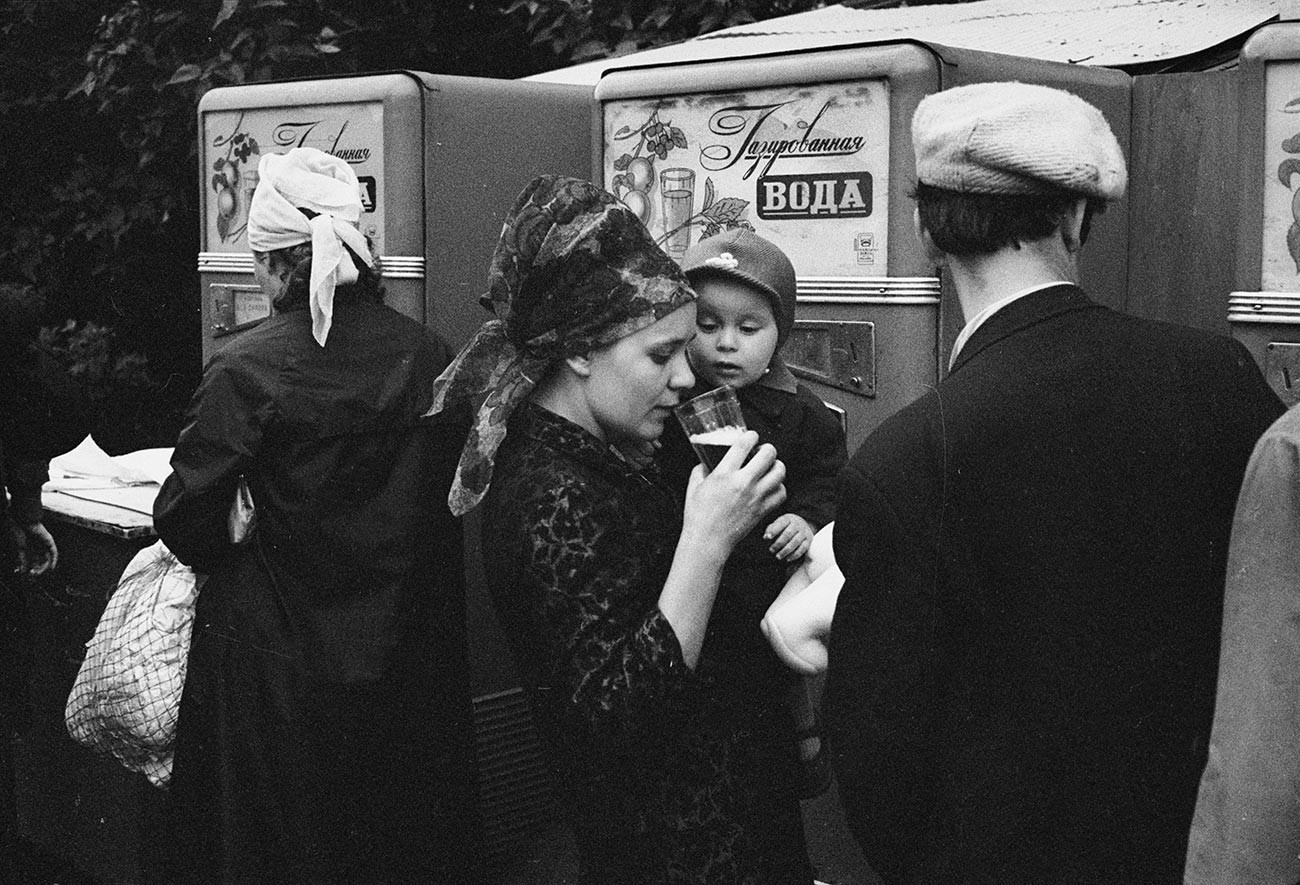 The vending machines functioned from May to September, and in winter, they would be locked in special metal cases. In the summer, lines were massive.

The following would usually happen: once it was your turn, you inserted the coin, selected the flavor, put the glass under the dispenser, got your drink, drank it right there in front of the entire line, and put the glass back. There was a special cradle with a grill underneath, allowing for the glass to be washed. You would have to turn it upside down, press down hard, and a modest water jet would spray it on the inside. (So modest you sometimes still saw lipstick stains!) 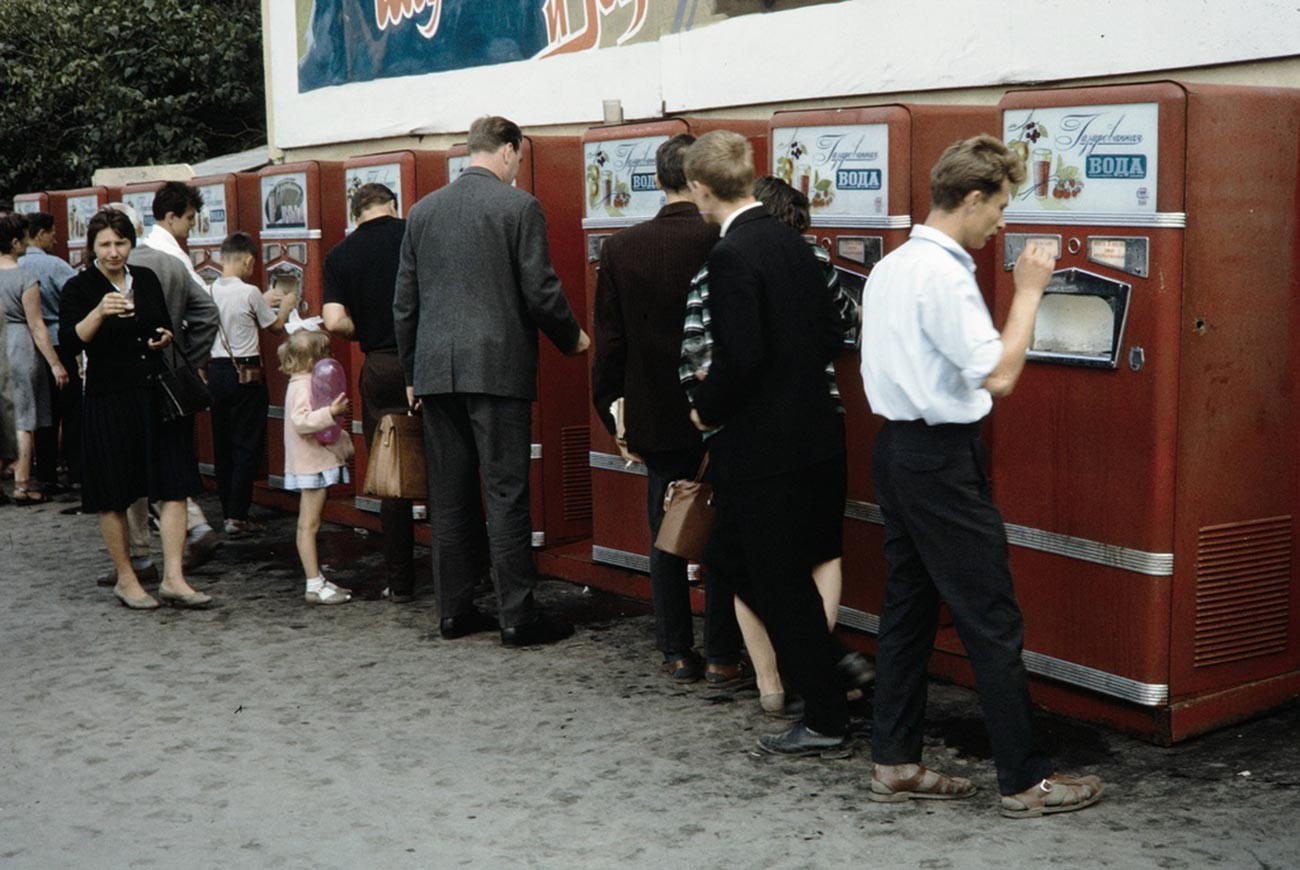 The machines would undergo periodic maintenance, which included washing the glasses out with hot water and a soda-based solution. But that didn’t happen daily.

How dangerous was the glass really? 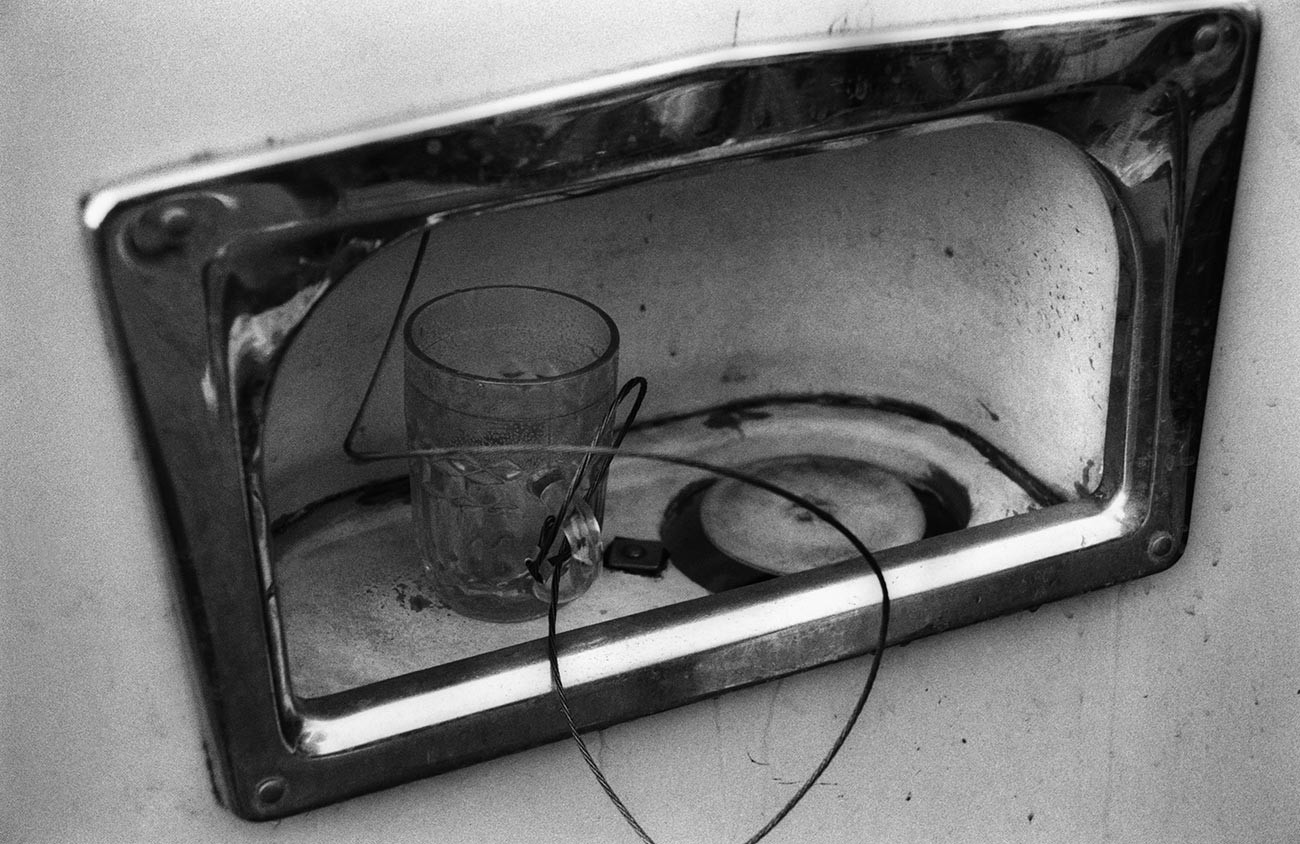 The truth is, the Soviet Union was not a place that often disclosed public health statistics to its own public. There had been epidemics in the past that there still isn’t data for. Such was the case with H1N1, dubbed the “Russian flu”: it traveled from South-East Asia to the Soviet Union in 1977, targeting predominantly young people, aged 20-25.

Glasses could easily have carried a virus. According to Elena Utenkova, Professor at Kirov State University’s Department of Infectious Diseases, “For example, there’s a risk of accurate respiratory infections - ARV, the flu. If the individual also has herpes that is currently inflamed, their saliva can carry the virus, which ends up on badly cleaned kitchenware.” 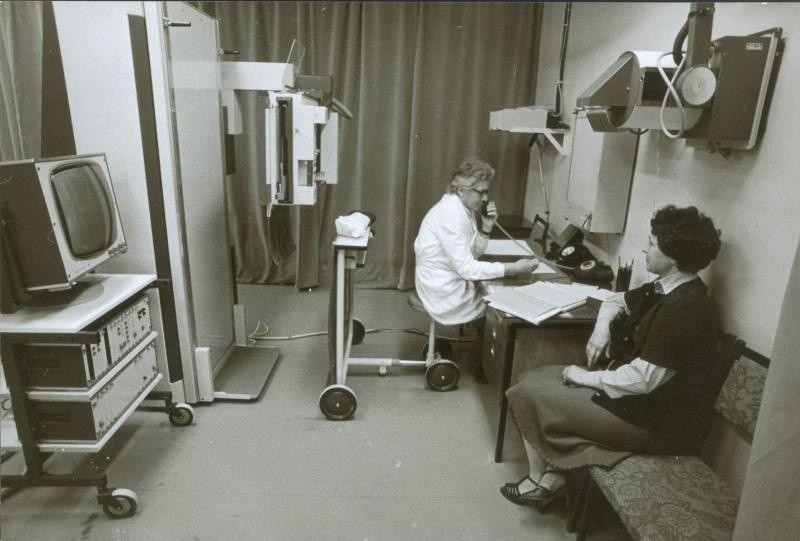 Unfortunately, in cases involving “ordinary” infections - such as the above ARV or the flu - no one would ever ask where the patient contracted them - be it just a shabbily cleaned glass, dirty hands, a contagious person nearby and so on. Meanwhile, the Soviet healthcare system never experienced anything that could be called an epidemiological crisis. In fact, it was considered by many to be the best in the world.

So, were the Soviet people even aware of the dangers? Some of them, yes. You could always see one or two people in the lines that always had their own glass ready. Others flat-out forbid their kids from ever going near a vending machine. 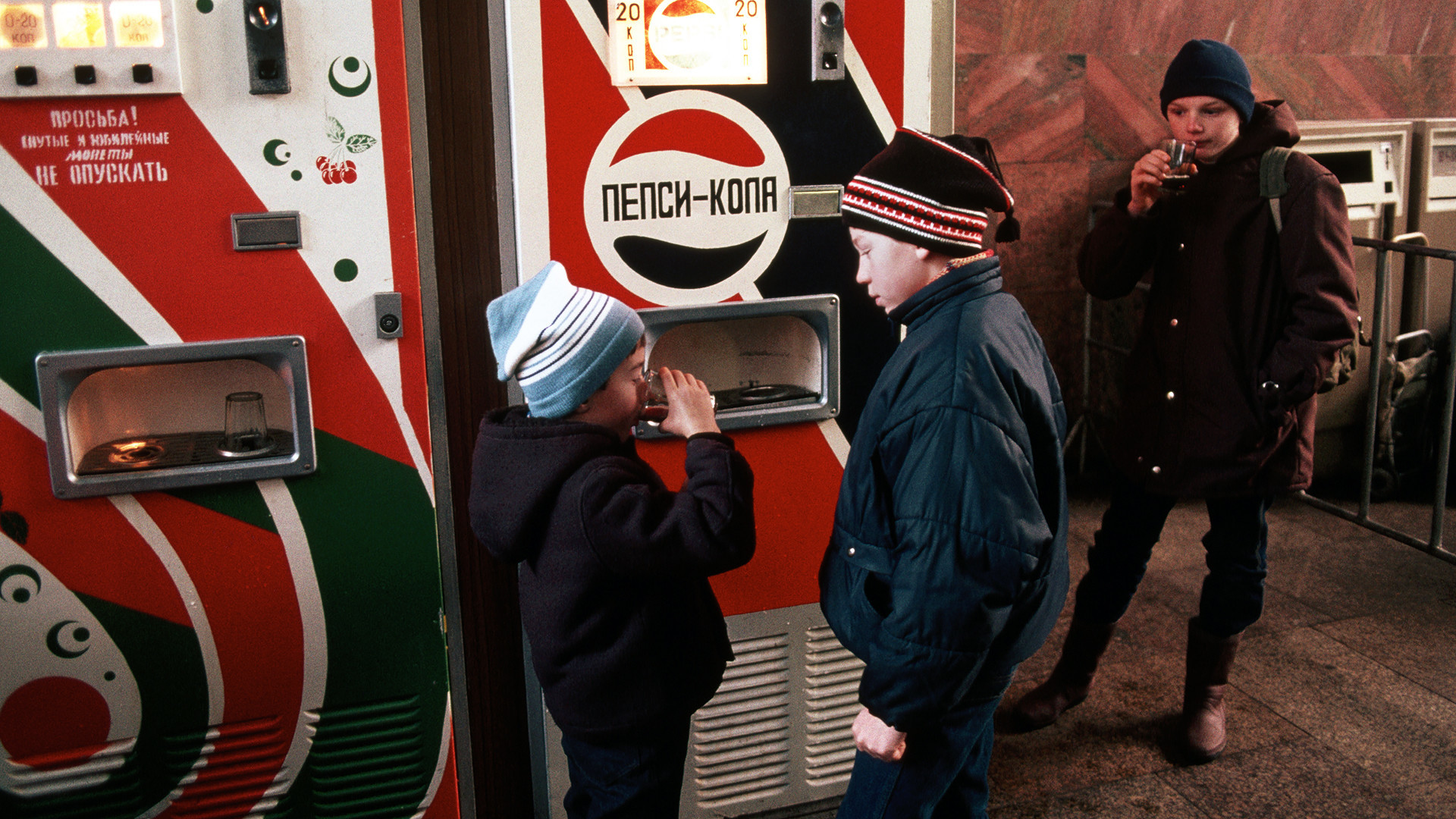 There were even silly urban legends, claiming that the glasses could give you syphilis. One of them had appeared during the 1980 Olympic Games in Moscow, when the country was flooded with foreign tourists. Someone spread the story that African-Americans, “who had syphilis”, would wash their genitals in the glasses at night. This tale - while absurd - was testament to health-related fears present in Soviet society, believes Aleksandra Arkhipova, head of the ‘Modern Folklore Monitoring’ research group at The Russian Presidential Academy of National Economy and Public Administration under the President of the Russian Federation (RANEPA).

Soviet fears of “aliens” made it easy to pin the blame on the spread of any illnesses on foreigners, while syphilis was always considered the most “inappropriate” of diseases. In this way, the vending machines had become known as ‘syphilizers’ - the perfect urban legend. This is interesting, given that hepatitis would have been far better fodder for the myth: unlike syphilis, you can actually contract it from a common drinking glass.

The end of an era 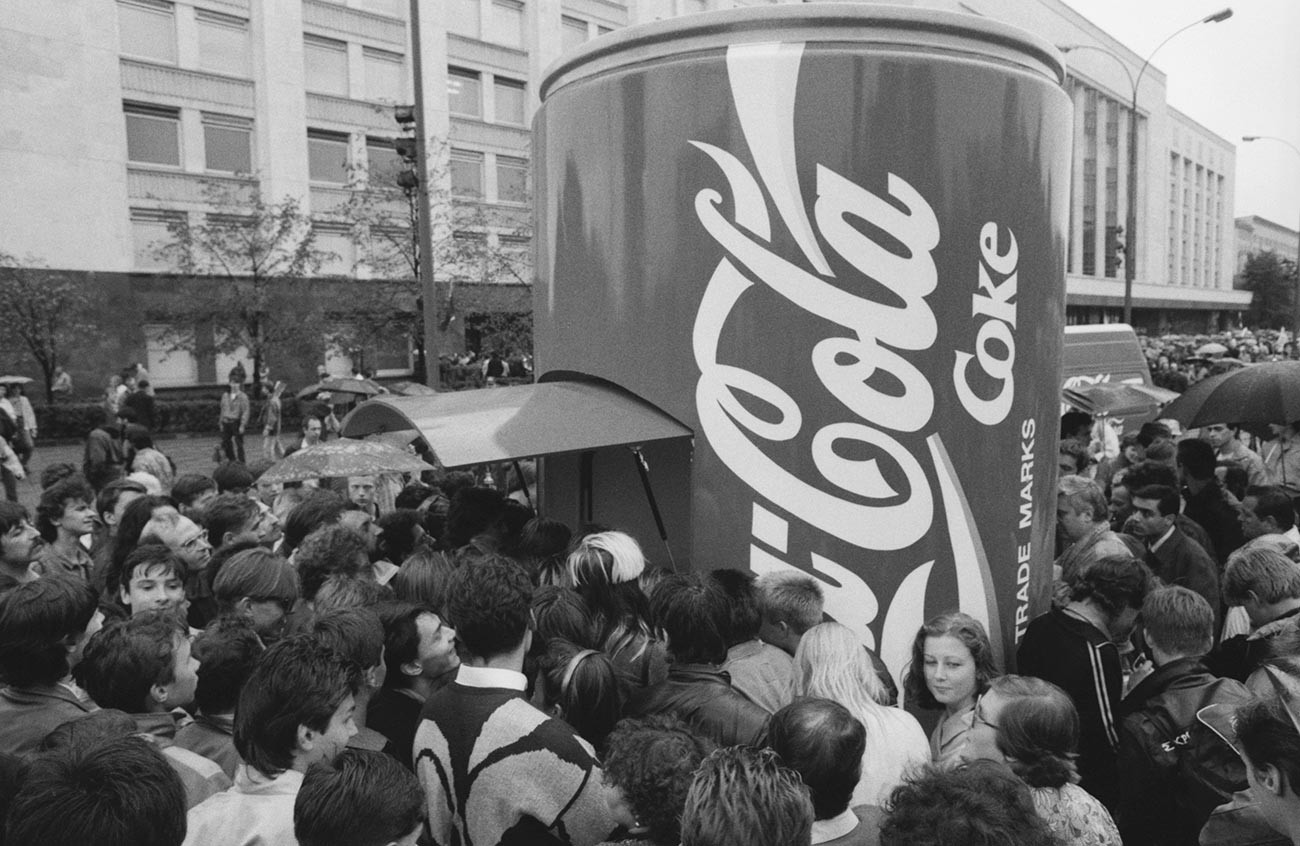 Nevertheless, it wasn’t epidemics, but the breakup of the USSR, that finally ended the epoch of the glass-based vending machines.

“In the 90s, the company ‘Torgmontazh’, that oversaw the installation and maintenance of the machines, simply abandoned them. The service system collapsed, and with it, the functioning of the machines themselves. Soon, they became obsolete, and you could buy carbonated drinks in every kiosk,” remembers David Gershzon, senior research fellow at the All-Russian Scientific Research Institute of Refrigeration Industry - which was behind the development of the first machines. 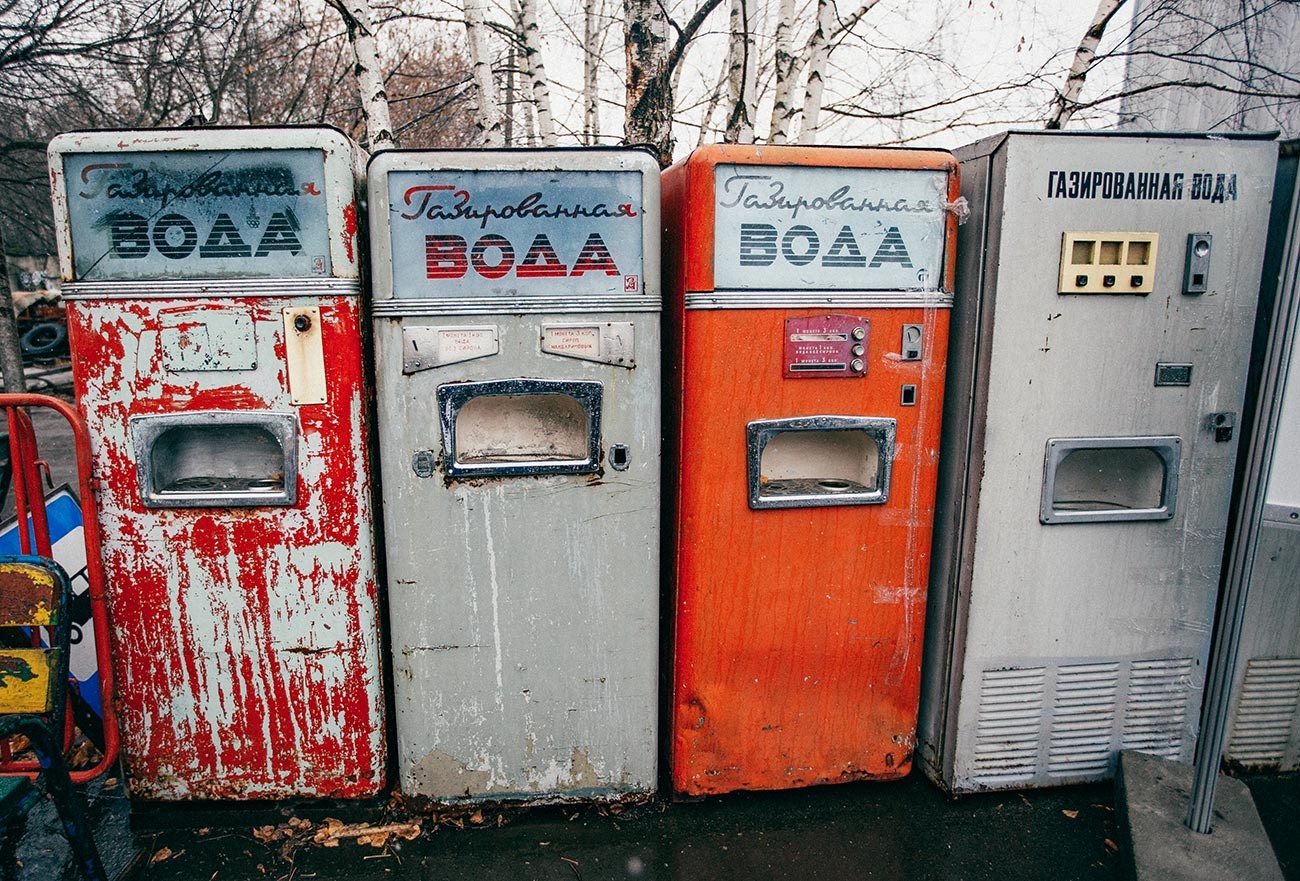 Aleksandr Barannik, then deputy director of ‘Avtomattorg No. 3’, said back then that one of the main reasons for the disappearance of the machines was inflation: “The coin-processing mechanism is quite complex, and refurbishing it several times a year amid such rapid inflation would have been simply unfeasible.”