Did you know Germans brought the May Day celebration to Russia? 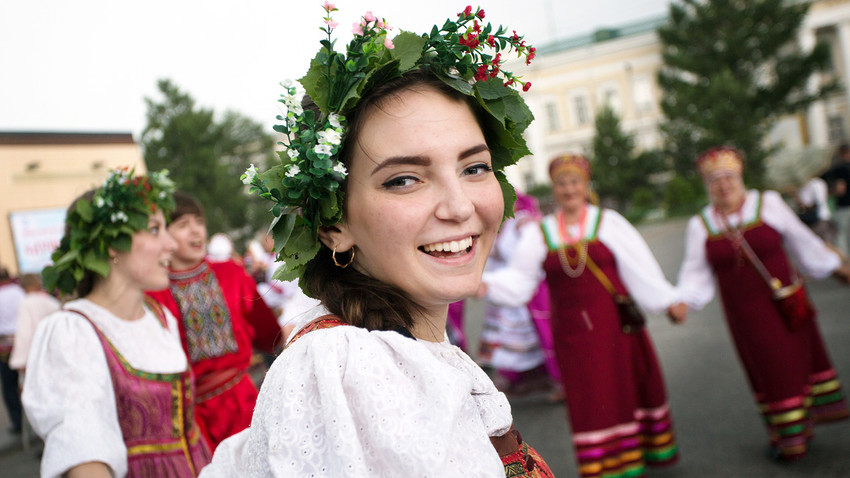 Dmitry Feoktistov/TASS
Even most Russians think the May 1st holiday was installed by the Bolsheviks as the celebration of “peace and labor”. However, even Peter the Great celebrated this holiday that actually originated in Germany.

The evil spirits can mess with your money – to put it very simply, that’s one of the beliefs that made Germans celebrate the first day of May – traditionally, the celebration came from tribal, maybe even ancient times. It was the first month of their financial year, and, as historian Tatyana Biryukova writes, Germans celebrated the ‘May Tree’ holiday (also known as Maypole) to ward off evil spirits and to summon luck.

Was the May holiday the same in Europe and Russia? 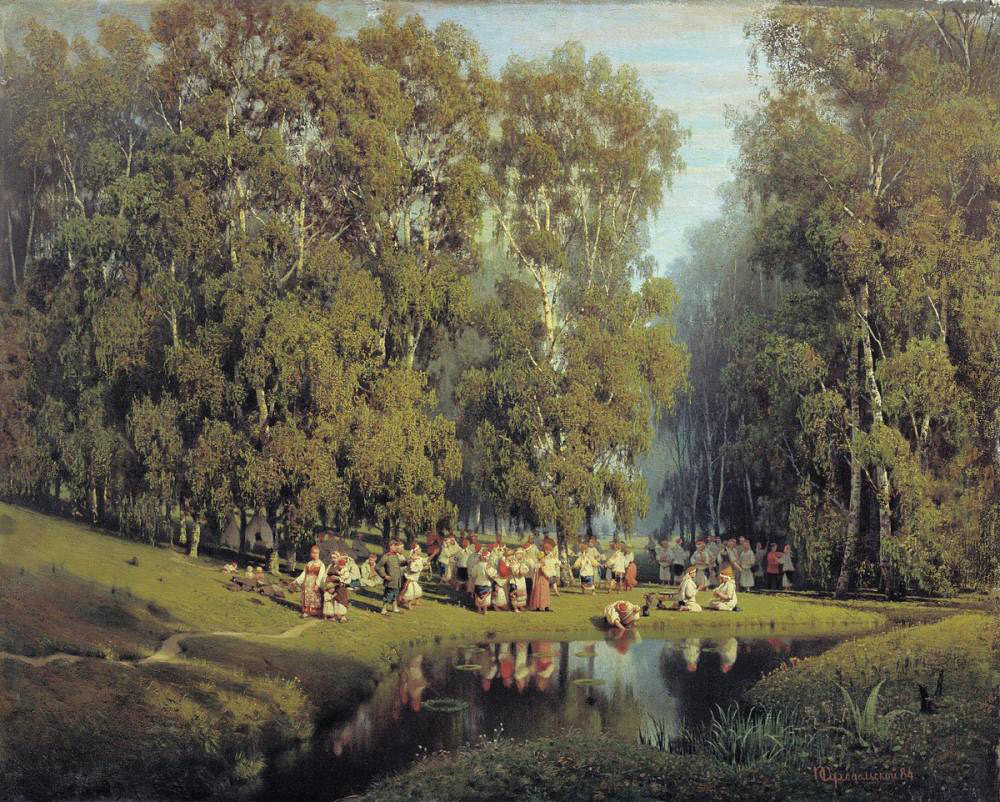 Russians had their own kind of May Tree celebration – a pagan rite that was celebrated on Trinity Day in early June. The birch tree was the central symbol of this day – wreaths were made from its leaves, birch trees were decorated and people danced in circles around them. A rite of passage of spring, marking the beginning of the next agricultural season, it was also a traditional holiday for young women, with girls making friendship vows with each other by walking under an arch made of young birch. And it was quite different from how this holiday was celebrated in Europe. 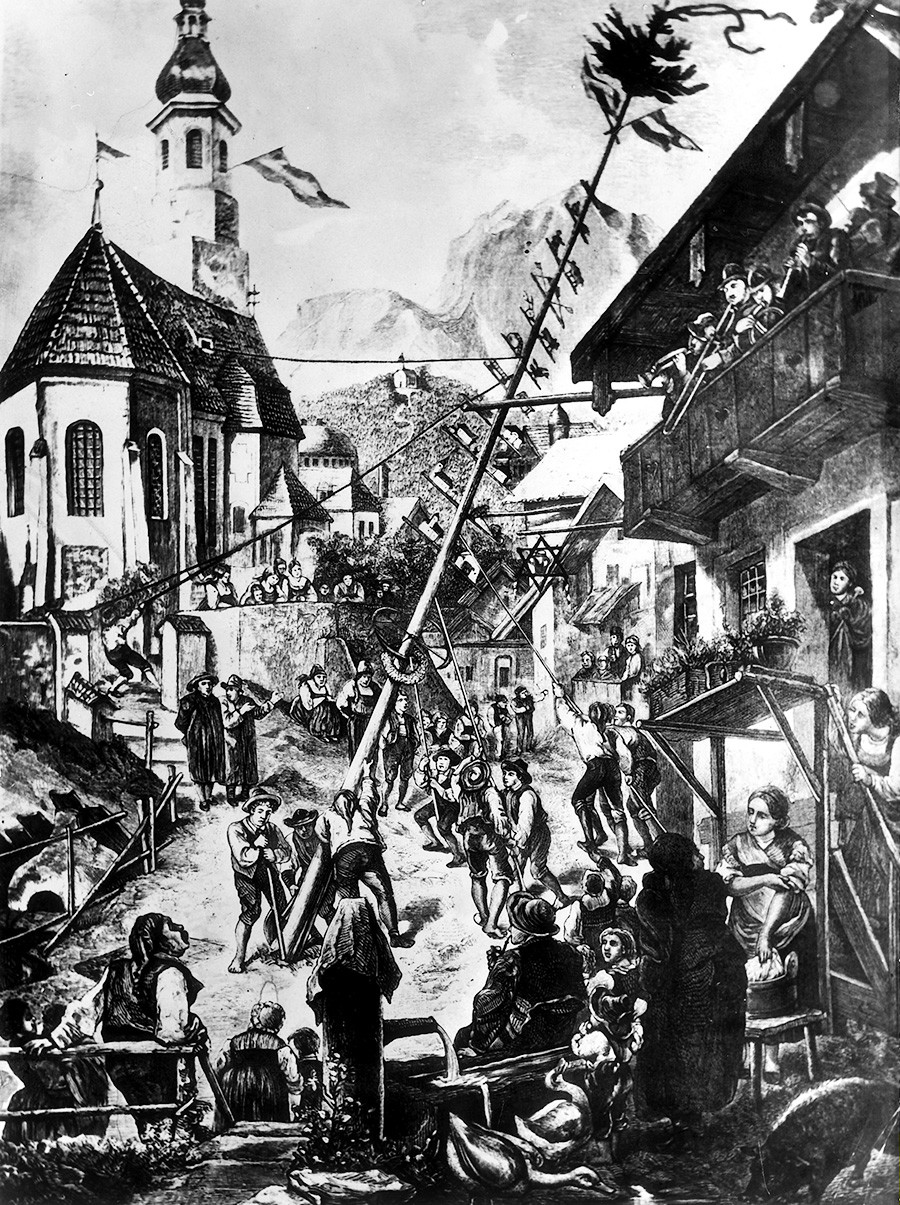 Putting up the Maibaum (Maypole) in a German town

In different forms, the May holiday existed in all European societies, and the tree, too, was its main symbol. The May Tree (in Central and Eastern Europe it was also the birch tree) symbolized the axis of the world and also alluded to phallic symbolism (a notion supported by Sigmund Freud) and fertility. The May celebration in its European form came to Russia relatively late and was actually foreign – Germans brought it.

Why did Germans travel to Russia? 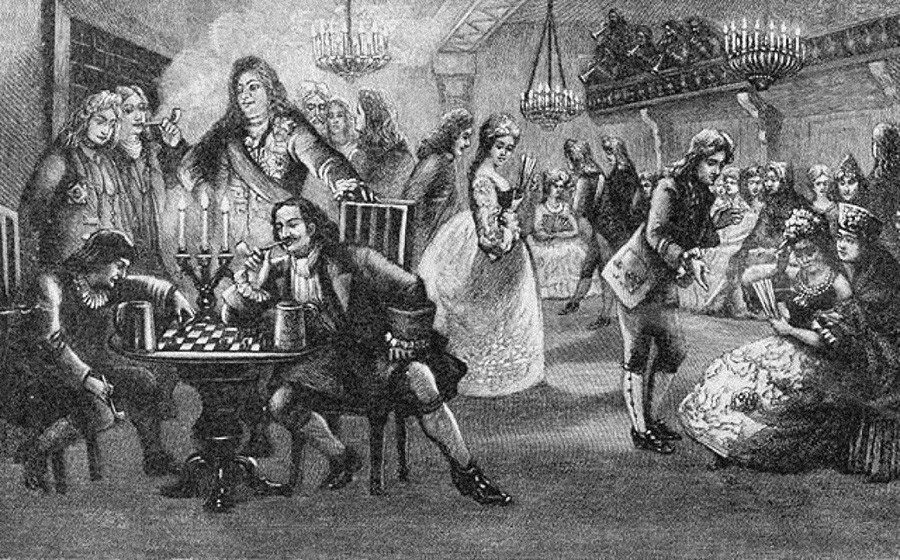 Peter the Great playing chess at an 'assemblée', social evenings he introduced in 1718

In the 15th-16th centuries, German military men, scientists, miners etc. started massively arriving at the Muscovy Tsardom to gain employment. There were so many of them that in the 16th century, under Ivan the Terrible, a special German Quarter was organized in Moscow.

READ MORE: Why were there so many Germans in the Russian Empire?

For decades, Germans, Brits, Danes, and the Dutch in Moscow were eyed warily, but at the end of the 17th century, the new young tsar Peter somehow took a special liking to the Germans. It happened because his mother was raised in a European way, and his father, Tsar Alexey Mikhailovich, had many interests in European sciences and technology of the era. Peter frequented the German Quarter, where he had friends like Patrick Gordon, the first foreigner in Russian history to whom the Russian tsar would pay a private visit to (in 1690).

Gordon, a man 37 years his senior, became Peter’s principal military advisor and a coach for soldiers and guards. Since then, Germans slowly started gaining new status within the Russian society – after all, whomever the Tsar liked, everybody had to like, as well.

The jolly nature of the Maibaum 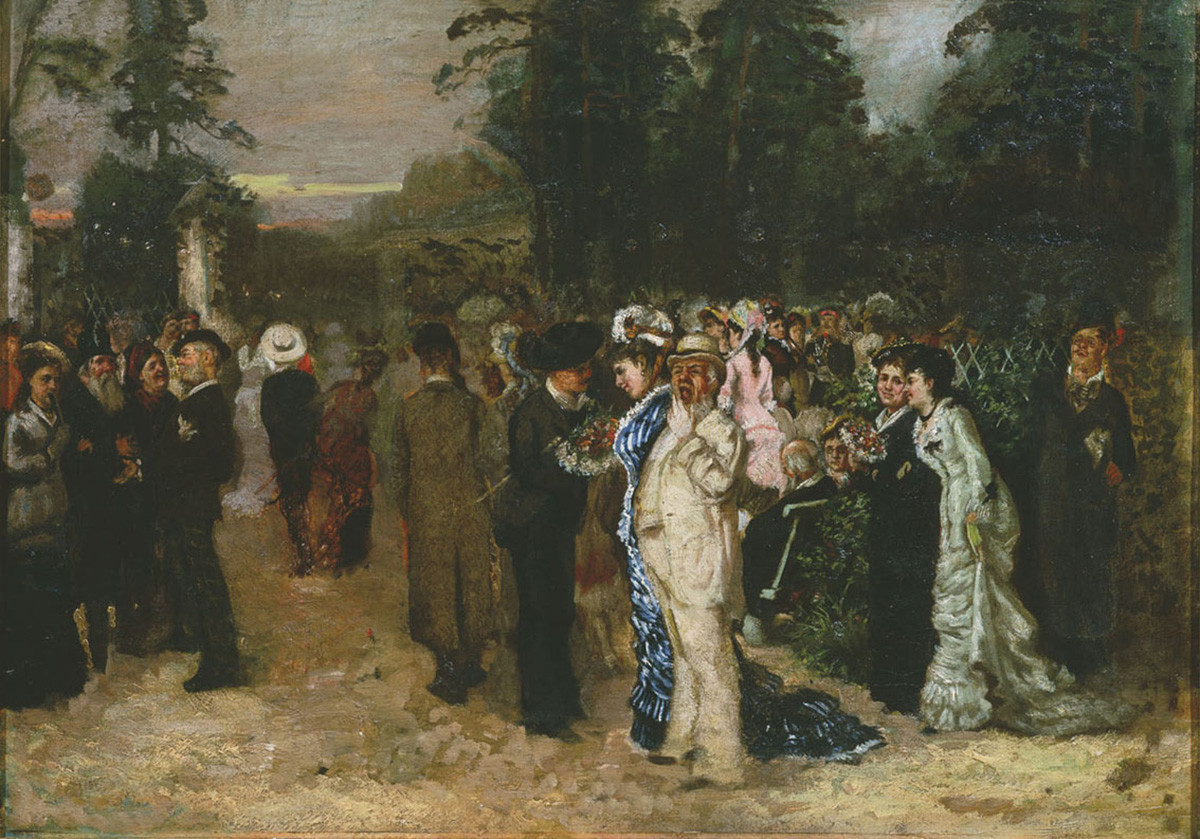 As more and more Germans inundated Russia, there was a moment of overflow, when the German Quarter couldn’t accommodate all the newcomers at once, so they built a temporary base in Sokolniki district – then, the outskirts of Moscow, where tsars used to do falcon hunts in the forests, giving birth to the name of the place (sokol, сокол – Eng. “falcon”). For a short time, there was a place called the ‘German Camps’ in Sokolniki, and even after all the guests had moved to the German Quarter, they kept returning to Sokolniki every May to celebrate Maibaum.

Their celebration was in no way as gentle as the Russian one. “In Germany, on Walpurgis Night, people believed witches, evil spirits, and all other evil things gathered for a sabbath. They transformed into animals, rode shovels and brooms, danced the unclean altar,” Biryukova writes. To scare the witches and imps away, “people ran around their villages holding burning hayricks on long poles, some were shooting their guns into the sky”.

A lot of noise! And a lot of drinking – and Russians love that when they’re celebrating. So in the 18th century, more and more Muscovites began to celebrate the May holiday the German way, with drinking and dancing, and climbing up the Maypole – a tall pole with a wreath on the top of it. By the late 18th century, this was happening not only in Moscow – as Germans now lived in all parts of the country. But how did it go down, for example, in the heart of the tradition, in Sokolniki? 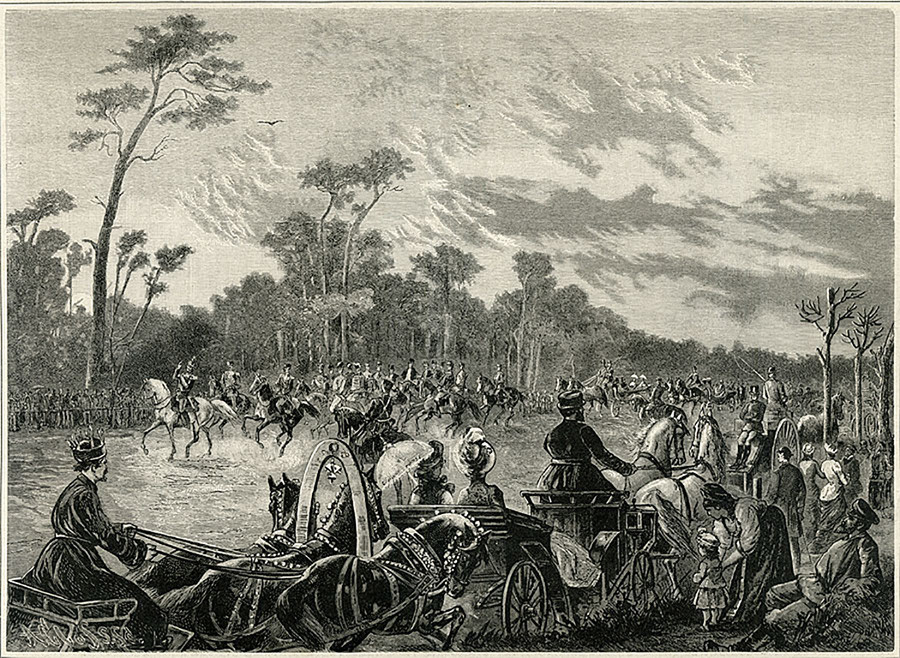 'Holiday in Sokolniki' by Nikolay Chekhov

‘German Camps’ began to be called ‘German Tables’ in the early 18th century, because Peter the Great regularly organized a free feast in Sokolniki for the Germans and Swedes in the Russian service. And this escalated quickly. In 1756, Moscow newspapers reported: “In Sokolniki, because of the fair weather, such a swarm of people had gathered, that about 1,000 carriages were spotted. The celebration continued into the late night.”

By the beginning of the 19th century, the Sokolniki promenade had lost its German origins and been transformed into an all-Moscow social parade. Everybody, from the lowest to the highest, appeared here – the luxurious elite to show off their enormous wealth, and the citizens – to stare at it in amazement. 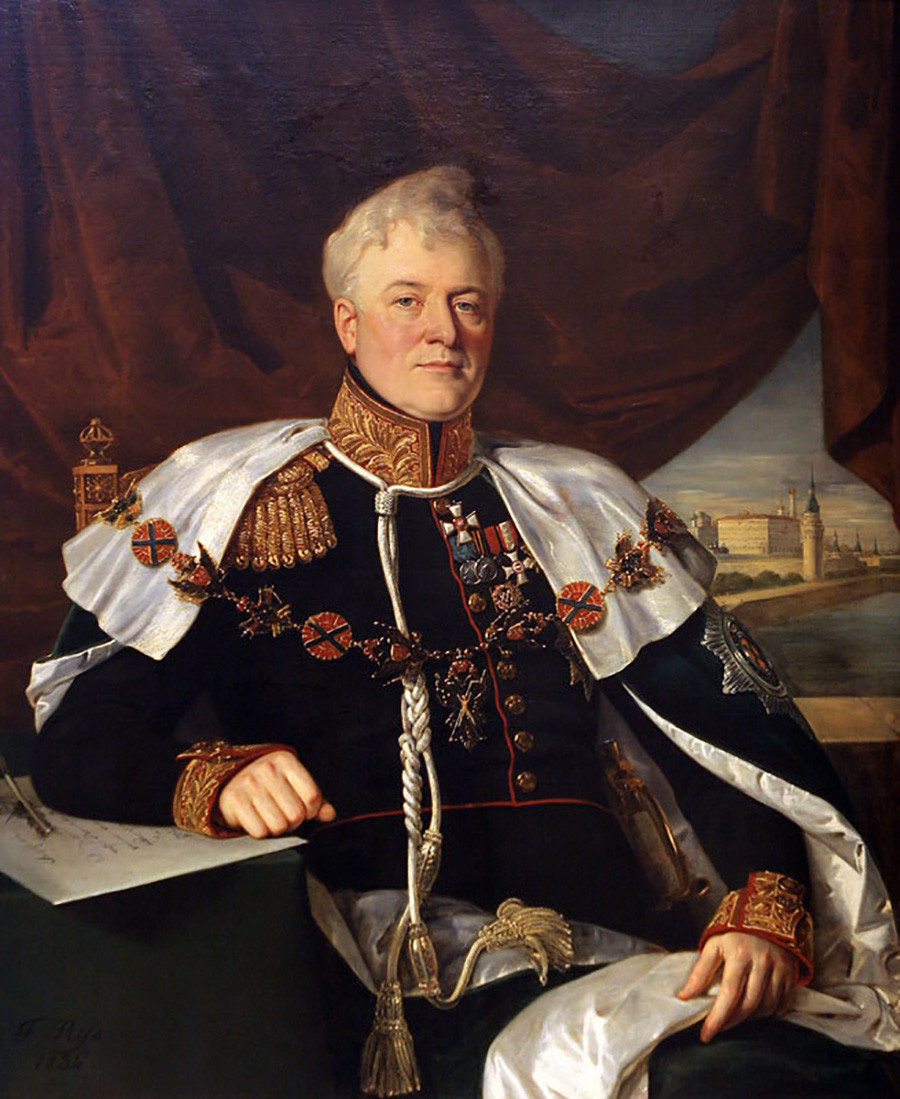 Officially, the Sokolniki promenade was ‘rediscovered’ by the Moscow Governor General, the lustrous Prince Dmitry Golitsyn (1771-1844). He was very foreign, himself – brought up partly in Europe, he had real troubles with Russian and spoke with a thick French accent. Every May 1, Golitsyn would organize a posh procession of luxurious carriages that stretched onward to Sokolniki.

There, the guests rode around the circle in their carriages. As historian Vera Bokova writes, there were up to 3,000 carriages and thousands of people! Moscow’s 19th-century opera singer, Pavel Bogatyrev, wrote that “these festivities were held amidst a column of dust standing in the air, among the noise of the drunken crowd, and people left there dazed from wine, jostling, and shouting”.

But the 1st of May as International Labor Day was, indeed, an ideological holiday celebrated USSR-wide and has little relation to the May celebration we described.