5 prolific women politicians in the USSR 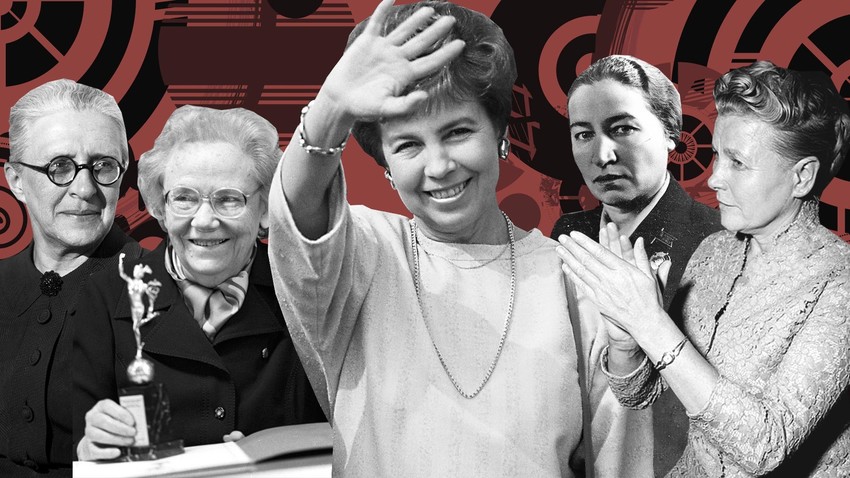 Getty Images; Mikhail Gershman, Rykov/Sputnik; Archive photo; Giorgio Lotti
At different times, there were women at the head of the Soviet perfume industry, culture, and health, but none of them were really close to power.

Catherine the Great was the last woman to rule the Russian Empire, and there were virtually no women in the politics under the tsars. Even in the State Duma (the Russian parliament) before 1917, there were no women because they had not yet won the right to vote. 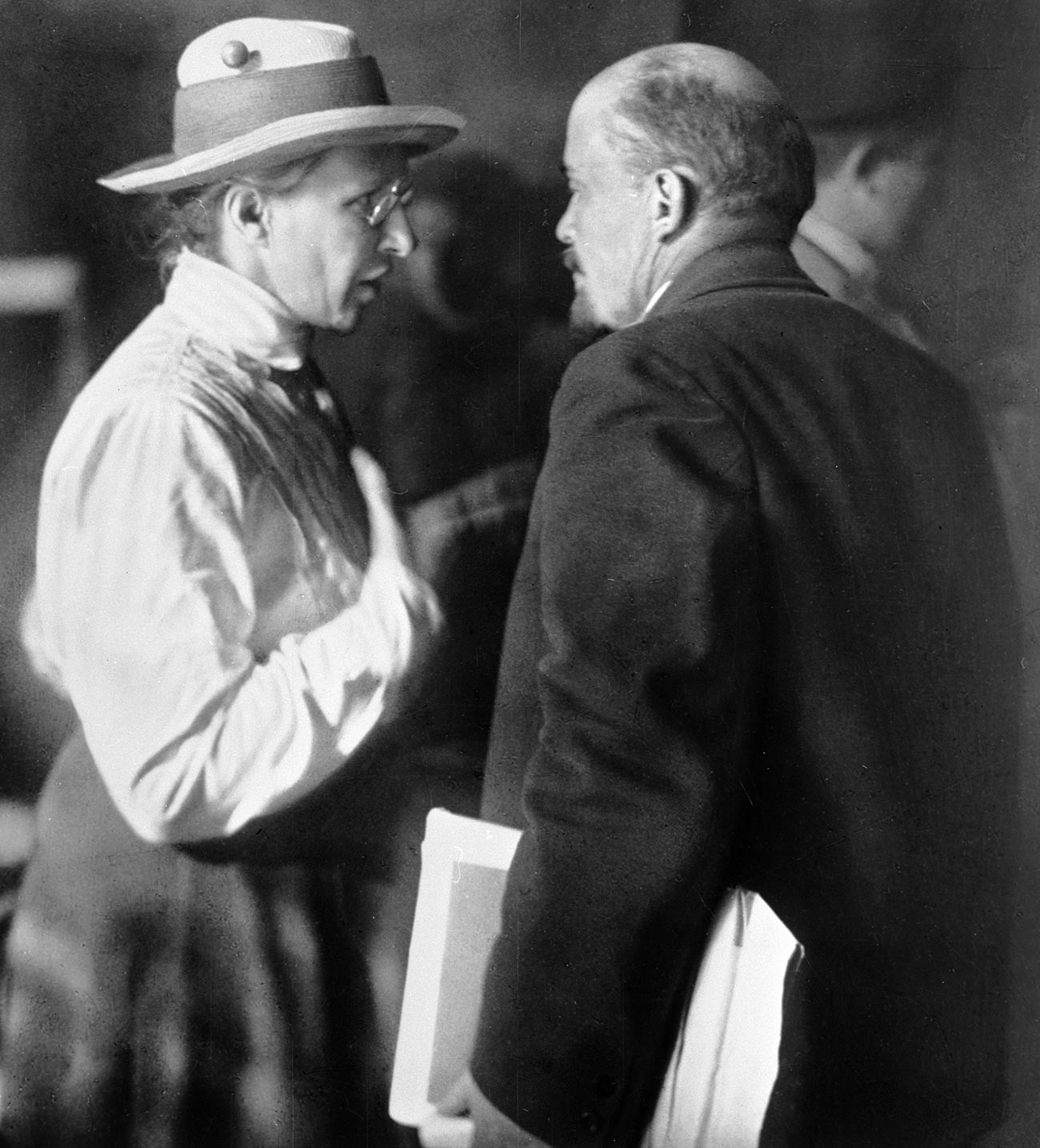 Elena Stasova (1873-1966) came from a noble family, was brilliantly educated and thought that it was possible because of the hard work of the masses: “My sense of duty to the people, to the workers and peasants who gave us - the intelligentsia - the opportunity to live as we did, became stronger and stronger,” Stasova wrote.

Stasova was a propagandist and organizer who worked in Switzerland (side by side with Lenin), Finland, the Caucasus, and all over Russia. Between 1913-1916 she lived in exile, using the underground nickname “Absolut”. An uncompromising figure, she was dedicated to building a Communist future. 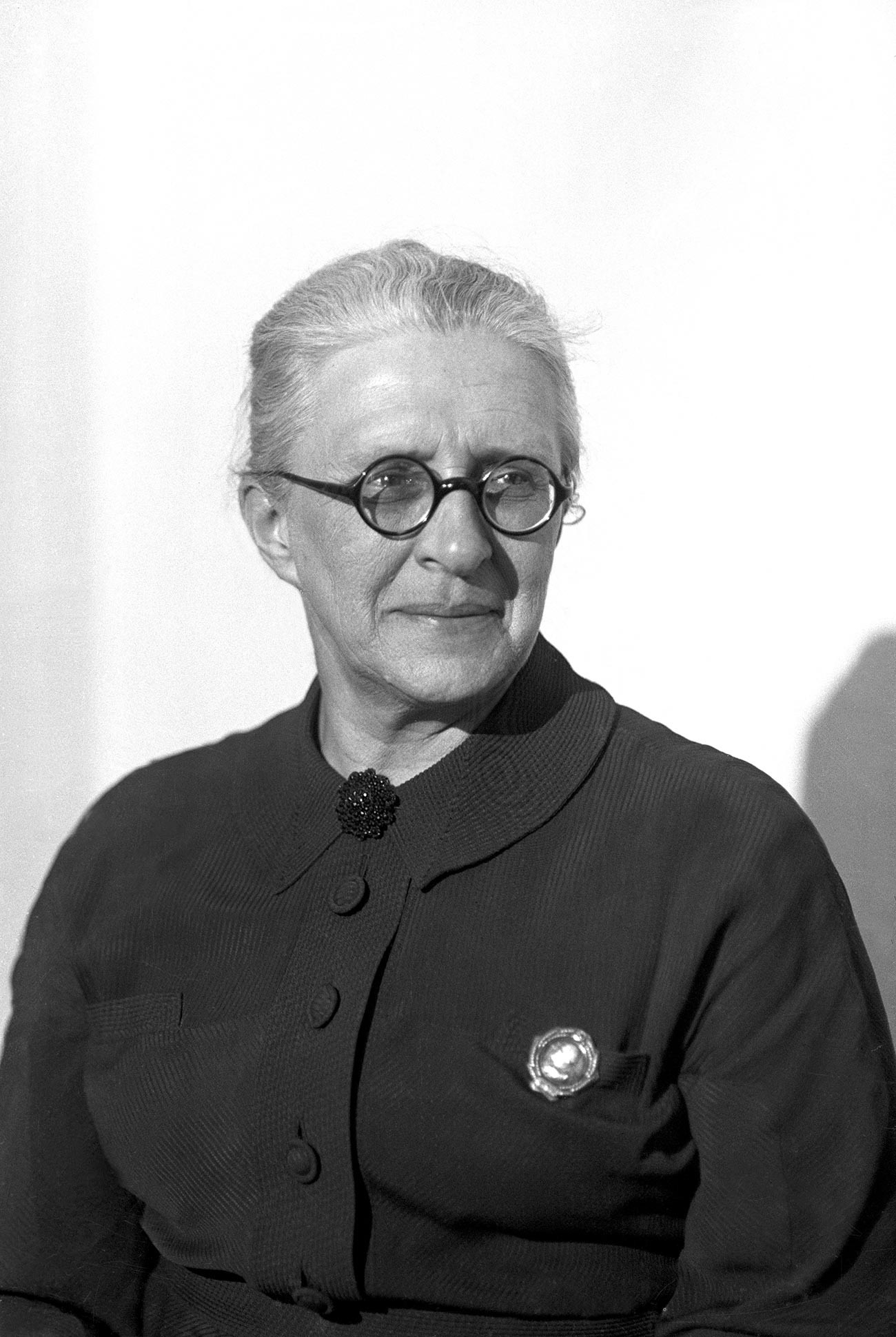 In the first formations of the Communist Party of the new state, Stasova was the Central Committee’s secretary (1919-1920) – the highest rank a woman ever achieved in the Soviet state. After 1920, Stasova occupied different state positions and was actively involved in society until her formal retirement in 1946. Elena Stasova lived to be 93 and died in Moscow in 1966. 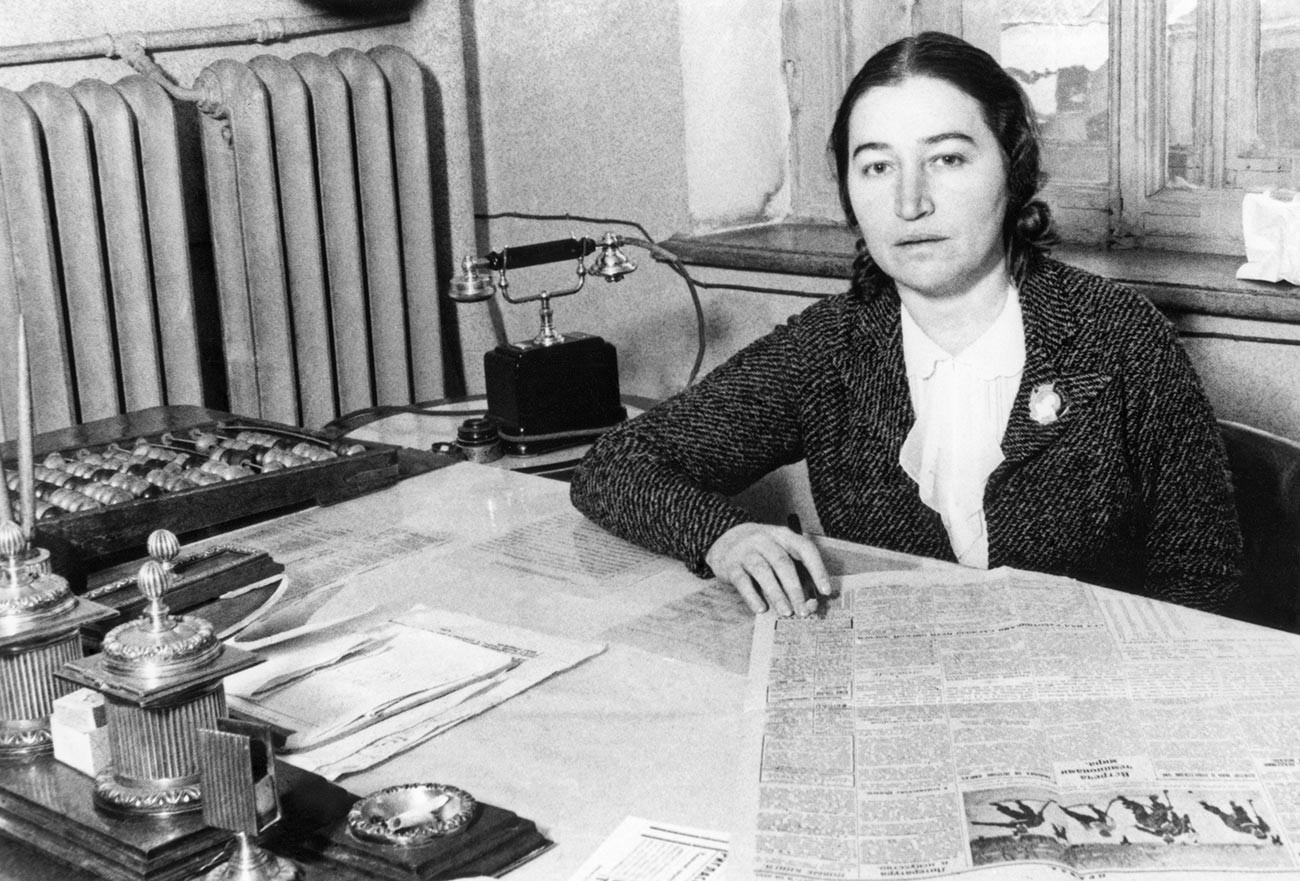 From the late 1920s, Zhemchuzhina’s career rocketed, and apparently, while her husband Molotov became the USSR’s “Prime Minister” – the Head of the Council of People's Commissars, she chose to be the head of the USSR’s perfume industry. In 1930-1932, Zhemchuzhina headed the famous “Novaya Zarya” perfume plant, from 1936 she headed the Department of perfume and cosmetics, synthetic and soap industry at the People's Commissariat of food industry of the USSR, and from 1939 she became a People’s Commissar for the Fish Industry. However, Zhemchuzhina only lasted 10 months there, soon downgraded to lower-ranking posts. 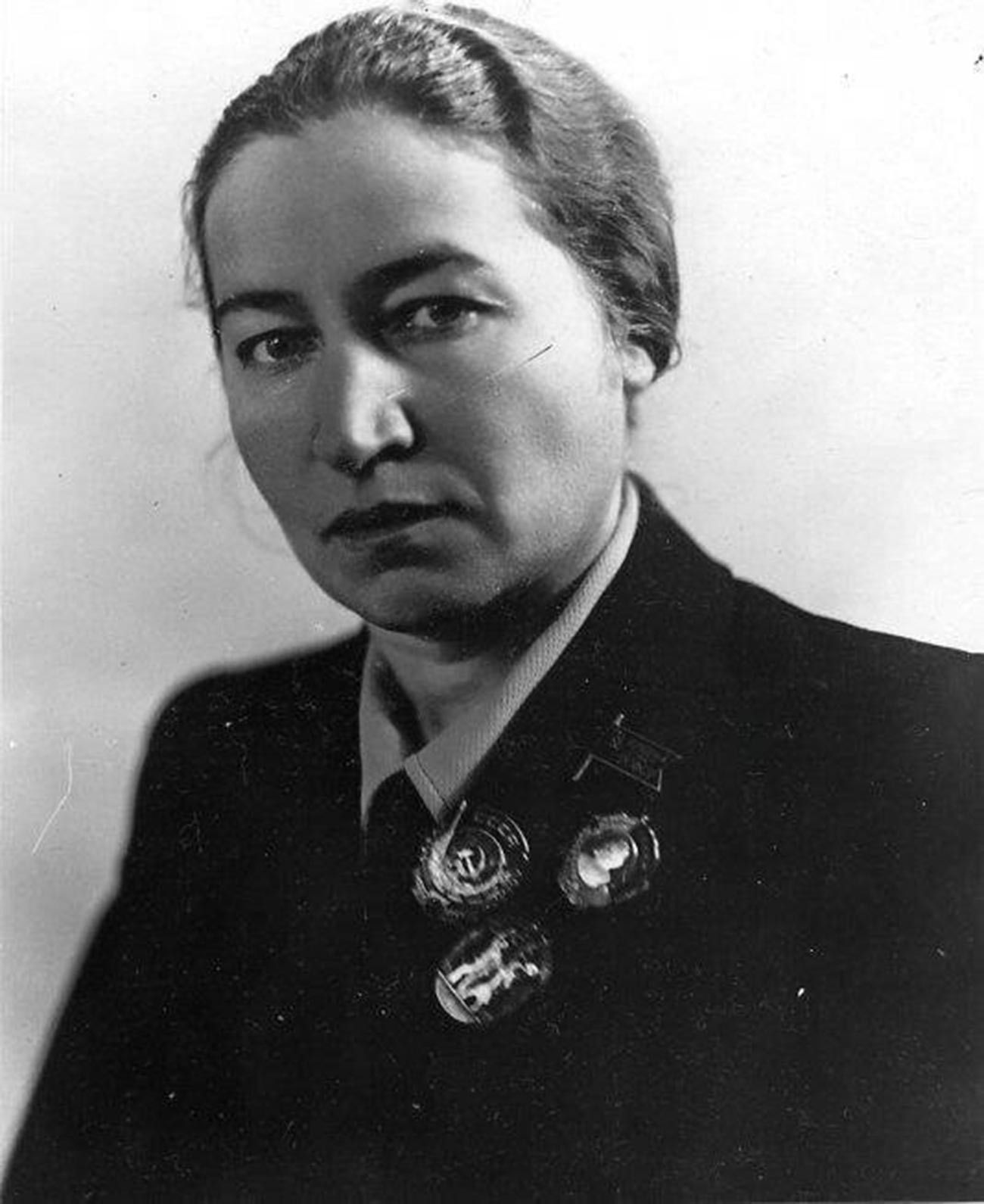 In 1949, Zhemchuzhina was expelled from the Communist Party – apparently, for openly expressing support for the Jewish people and the newly-founded state of Israel (Zhemchuzhina was ethnically Jewish by birth). Molotov couldn’t save his wife from the repressions – Zhemchuzhina’s brother and sister were apprehended and later died in prison, and in late 1949, Polina Zhemchuzhina was condemned to 5 years in exile. She was released and rehabilitated politically in 1953, after Stalin’s death, and lived in Moscow until her death in 1970.

3. Mariya Kovrigina, Minister of Health of the Soviet Union 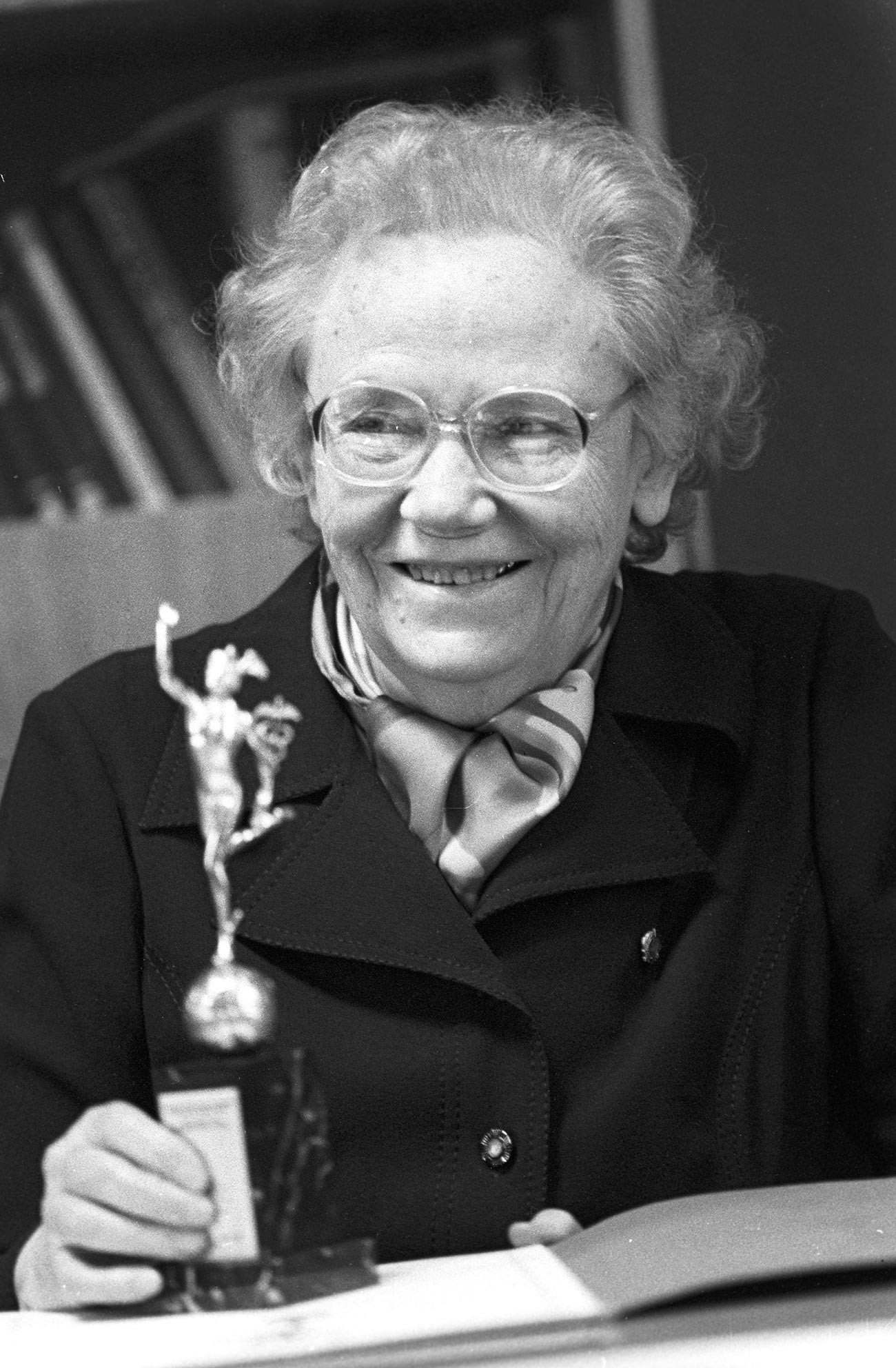 Mariya Kovrigina (1910-1995) came from a simple peasant Russian family - and the success in her career can be attributed to her skills at self-promotion. At the age of 14 in 1924, she became a member of the Komsomol (the All-Union Leninist Young Communist League – Communist Party’s youth organization), and by 17, was a secretary of the local Komsomol branch in her village.

Kovrigina went on to receive a medical education and worked in Chelyabinsk, Russia, reaching the rank of the Chief of Staff of the Chelyabinsk regional Department of Health and Education. During WWII, she was responsible for accommodating and treating evacuees (including children evacuated from Leningrad during its siege). Although based in Chelyabinsk, she received a medal “For the Defence of Leningrad.” In 1942, Kovrigina was appointed Deputy Minister of Health, and in 1950, became the Minister of Health of the Soviet Union, a post she occupied until 1959.

During her years as a minister, her most important contribution was the 1955 Order of the Supreme Soviet of the USSR to decriminalize abortions in the USSR (abortions were banned in 1936). Aside from that, Kovrigina introduced financial help to mothers of 3 and more children, increased official maternity leave to 112 days – definitely, Kovrigina did much to help young mothers in the USSR. After she left the minister’s post in 1959, Kovrigina worked as the Director of the Central Institute of Advanced Medical Training. She lived to be 84 and died in Moscow. 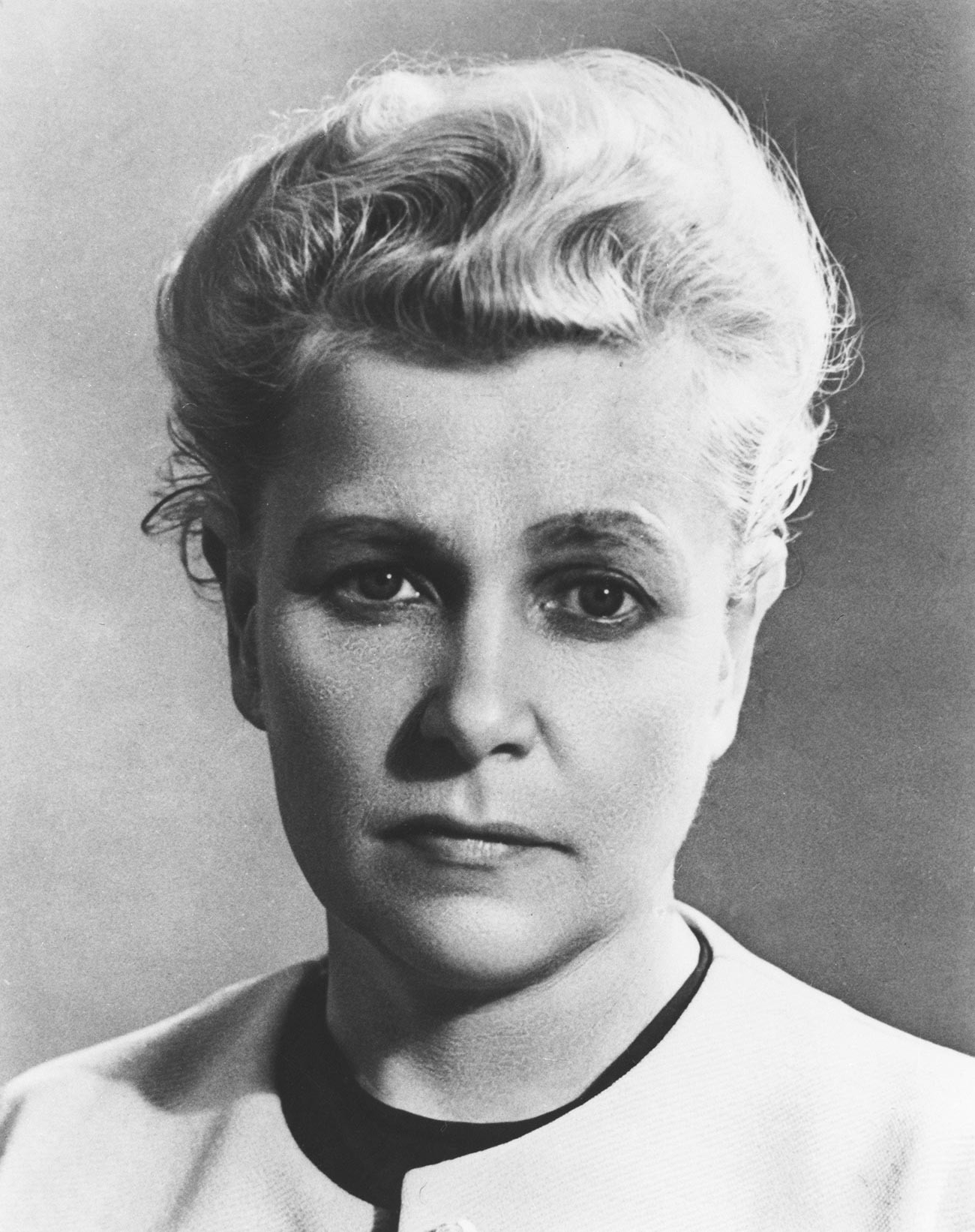 Minister of Culture of the USSR Ekaterina Furtseva

In the USSR, Yekaterina Furtseva was famous as the Minister of Culture – but she was downgraded to this position and considered it akin to internal exile.

The early biography of Yekaterina Furtseva (1910-1974) is much like that of Mariya Kovrigina – Furtseva, too, was raised in a simple working family. Her mother Matryona Furtseva was illiterate. Also at 14, Yekaterina entered Komsomol, but already by 20, had become a member of the Communist Party and soon rose to be secretary of the Komsomol City Committee in Feodosia, Crimea.

Furtseva ascended the ladder of party service with tremendous speed, becoming a member of the Komsomol Central Committee by 1935. But her private life was in turmoil. In 1942 her first husband, military pilot Pyotr Bitkov, left Yekaterina and their baby daughter for another woman – meanwhile, Furtseva was overwhelmed with work. As a Party official, she took part in organizing the wartime evacuation of Moscow. 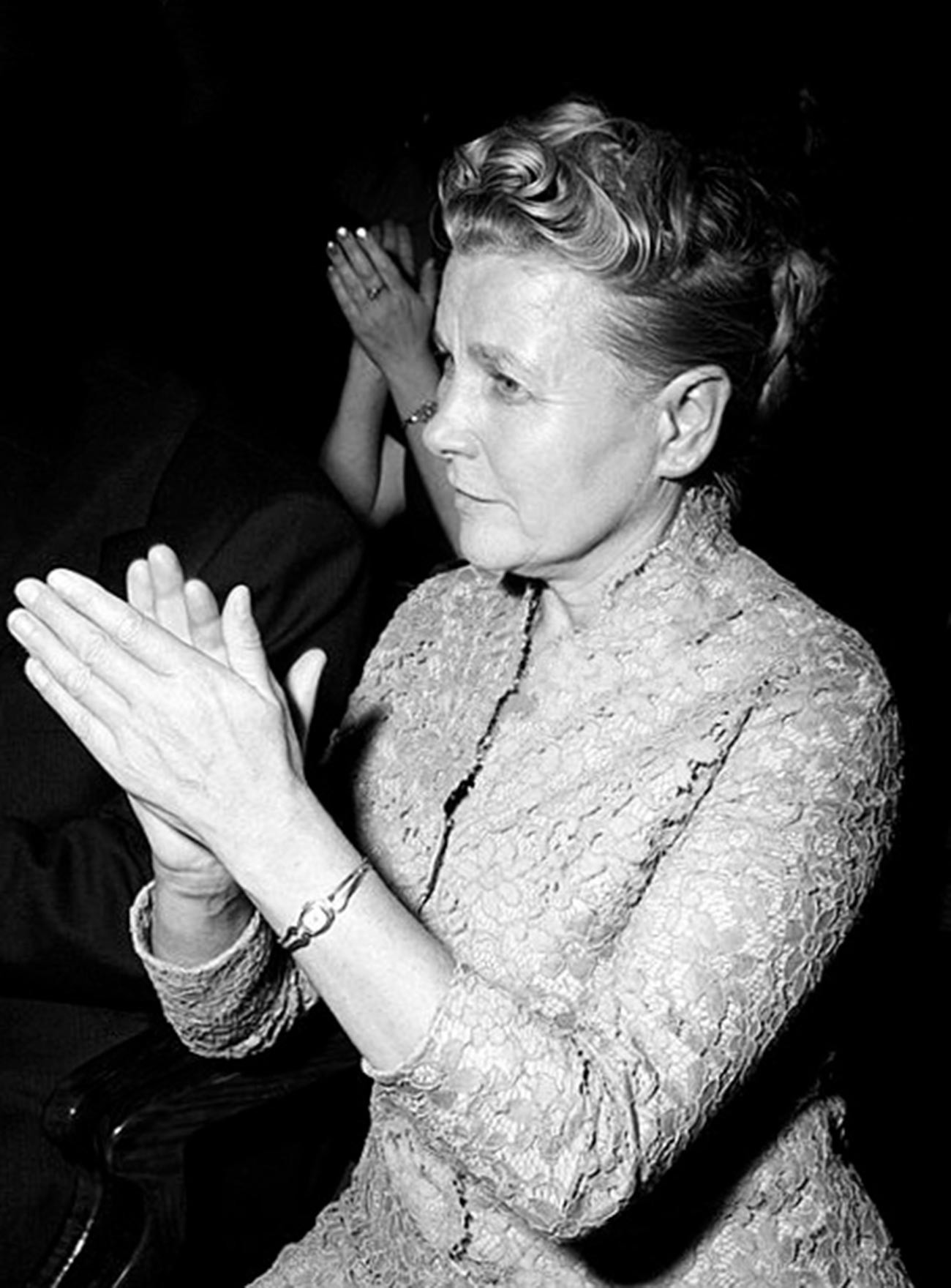 Ekaterina Furtseva in her later years

The hard work paid off eventually – in the 1940s, Furtseva became a friend of Nikita Khrushchev, the secretary of the Moscow Communist Party’s Central Committee. When in 1953, Khrushchev became the nation’s leader, Furtseva at first took his former position, and then became one of the Secretaries of the Central Committee of the Communist Party of the USSR – that’s where all the state decisions were approved. This means Furtseva occupied a position as high as Elena Stasova once did.

In the late 1950s, Party intrigues resulted in Furtseva being expelled from the Central Committee and, in 1960, downgraded to Minister of Culture. Allegedly, after learning about this, Furtseva tried to kill herself by slashing her wrists, but recovered. As the Minister of Culture, she was a controversial figure – while banning the records of foreign rock bands from being sold in the USSR, she helped organize numerous art exhibitions, encouraged construction of countless theater buildings, and promoted Russian ballet. Yekaterina Furtseva headed the Ministry of Culture until her death in 1974. 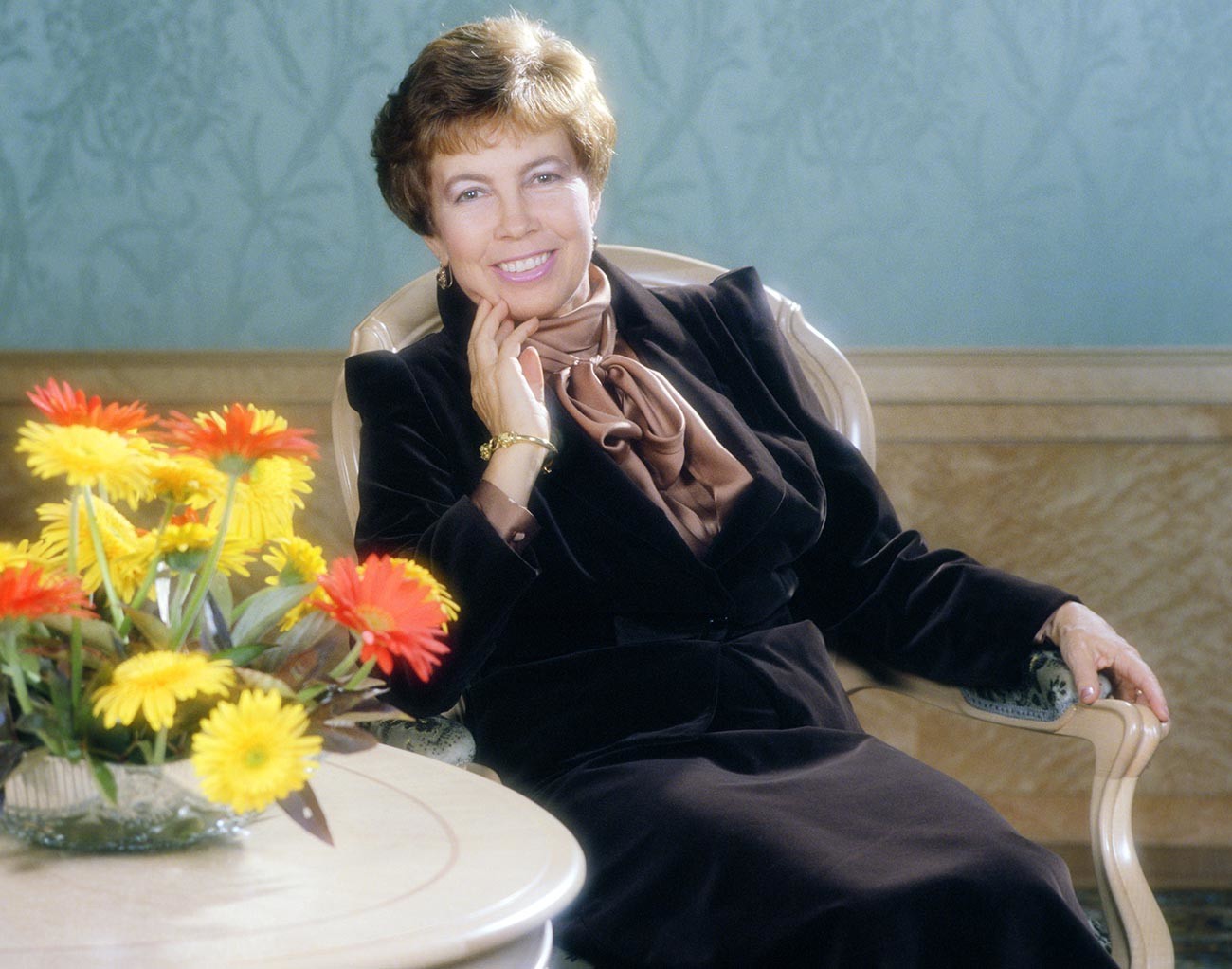 Although not a state servant, Raisa Gorbacheva (1932-1999), the wife of the last Soviet General Secretary Mikhail Gorbachev (b. 1931), greatly influenced Soviet political life. She became the country’s first ‘First Lady.’

The wives of Soviet leaders – Stalin, Khrushchev, Brezhnev – were almost never seen near their husbands in public – as if they were tsarinas in Muscovy Tsardom. (Valentina Tereshkova - the first female cosmonaut - usually accompanied the wives of high-ranking officials who came to the USSR.) Raisa Gorbacheva was a stark contrast. Before the elevation of her husband to the highest post, she was a philosophy teacher – but as the General Secretary’s wife, she accompanied her husband during all his official trips, including, of course, foreign ones.

In 1984, Raisa accompanied Gorbachev on his visit to Great Britain, where he had a meeting with Prime Minister Margaret Thatcher. Raisa, unlike Mikhail, was a fluent English speaker, which of course helped her communicate with Thatcher, or Nancy Reagan during the 1987 Gorbachev’s visit to the USA. Raisa was also always there during foreign officials’ visits to the USSR. 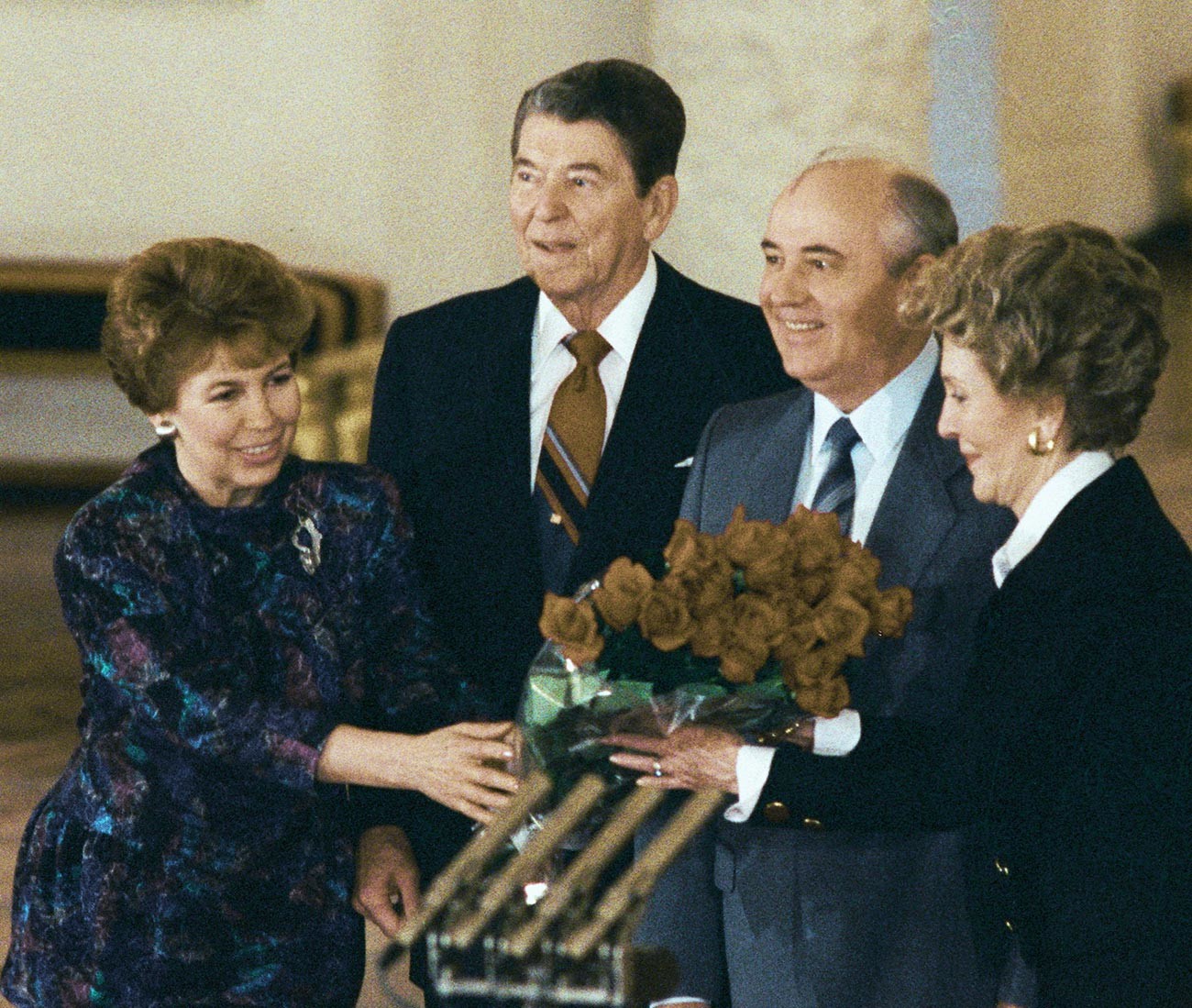 General Secretary of the Central Committee of the CPSU Mikhail Gorbachev (second from right) and the US President Ronald Reagan (center) with their spouses at a meeting in the Kremlin during the visit of R. Reagan in the USSR in 1988

Raisa was always with Mikhail – even on TV. Her dresses, coats, make-up were envied by all Soviet womnen – and not always in a good way, because in the 1980s, the country was going through an economic crisis. However, Gorbacheva denied that she ever bought any expensive clothes: “There are a lot of myths about some of my extraordinary passion for villas, dachas, luxury dresses, jewelry,” – Raisa Gorbacheva said. “I did not order dresses at Yves Saint Laurent's, as journalists claimed... I was dressed by craftswomen from a studio on Kuznetsky Most.”

Raisa Gorbacheva was also doing a lot of charity work, and supporting the preservation of Russian heritage. She encouraged the creation of the Soviet Culture fund that supported museums and libraries, and financed restoration projects. Gorbacheva also was a presiding member in the “Children of Chernobyl” charity fund. Gorbacheva stayed close to her husband after the fall of the USSR, continuing her public work and charity activities. She died of leukemia in 1999, aged 67.