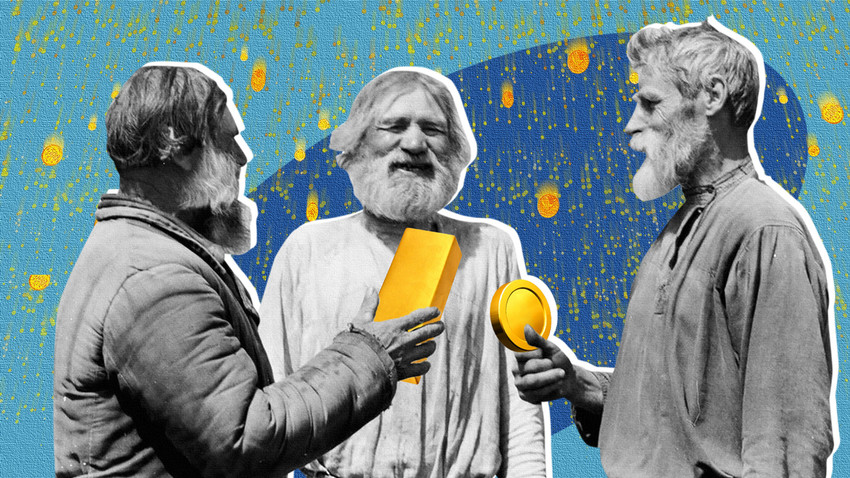 Fortepan (CC BY-SA 3.0); Russia Beyond
From serfs to nationwide tycoons – such lengths could only be covered by sturdy Russian peasants.

Even after former serf turned railroad tycoon Pyotr Gubonin became rich, he still dressed like a simple Moscow merchant. The famous spirits businessman Pyotr Smirnov only hired people who kept their word, while Yakov Shchukin fearlessly changed his line of business until he got what he wanted – the occupation of a famous entrepreneur. Russian peasantry has sometimes given birth to some incredible business talents. 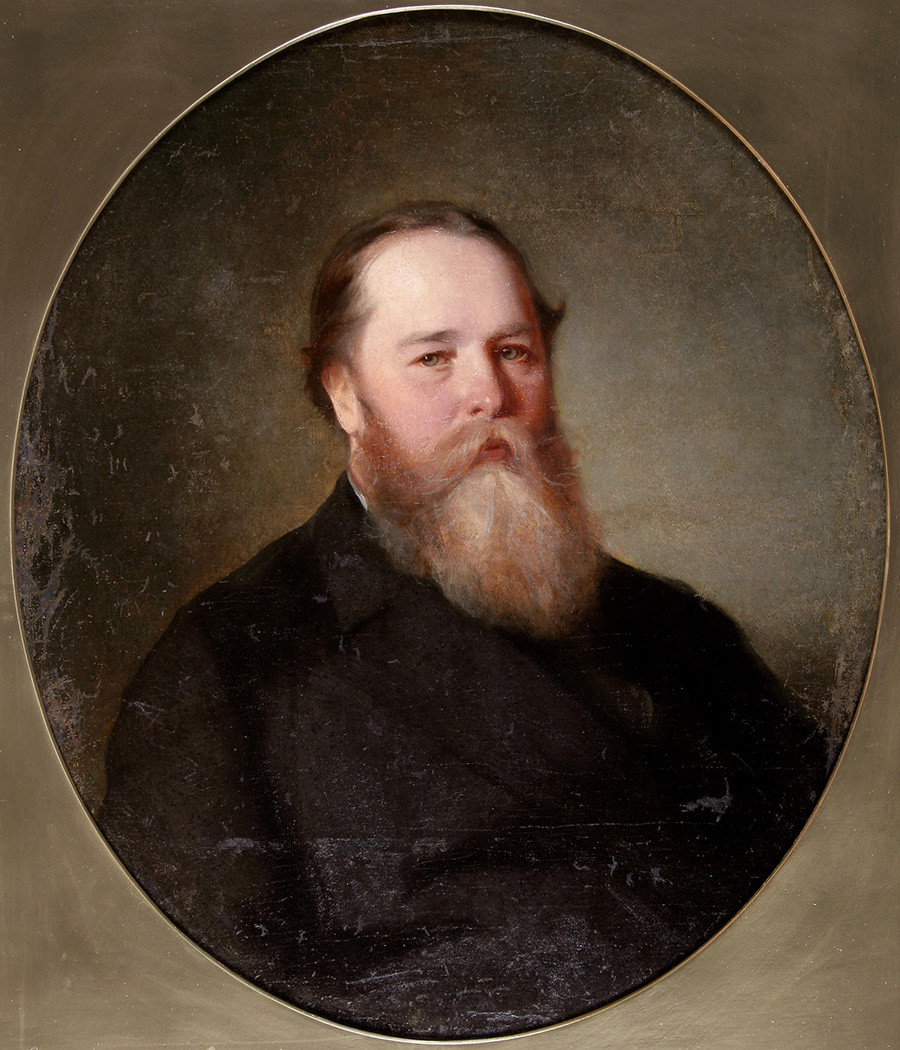 The Russian ‘Railroad King’, Pyotr Gubonin (1825-1894) was born into a serf family in Kolomna Region. From an early age, he surprised everyone with his abilities – he learned the hard craft of producing millstones in just 5 years. The 17-year-old prodigy was sent to Moscow to work under Vasiliy Yakovlev, an important person in the Moscow stonemill business. As Yakovlev got old, Gubonin inherited his connections and contracts. In 1848, when the construction of a road from Moscow to the city of Brest began, Gubonin gained the right to construct all stone buildings along this road.

By 1858, Gubonin had bought himself and his family out of serfdom and bought a stone mill near Moscow. Gubonin’s men were behind the stone finishing of the embankments along the Moscow River, as well as the bridges and some city buildings. But Gubonin made the most of his fortune when he entered into the railroad business. The Moscow-Kursk railroad, the Oryol-Vitebsk, Lozovo-Sevastopol, Ural, Gornozavodsk, Baltic and other railroads – all were built with his participation and funds. 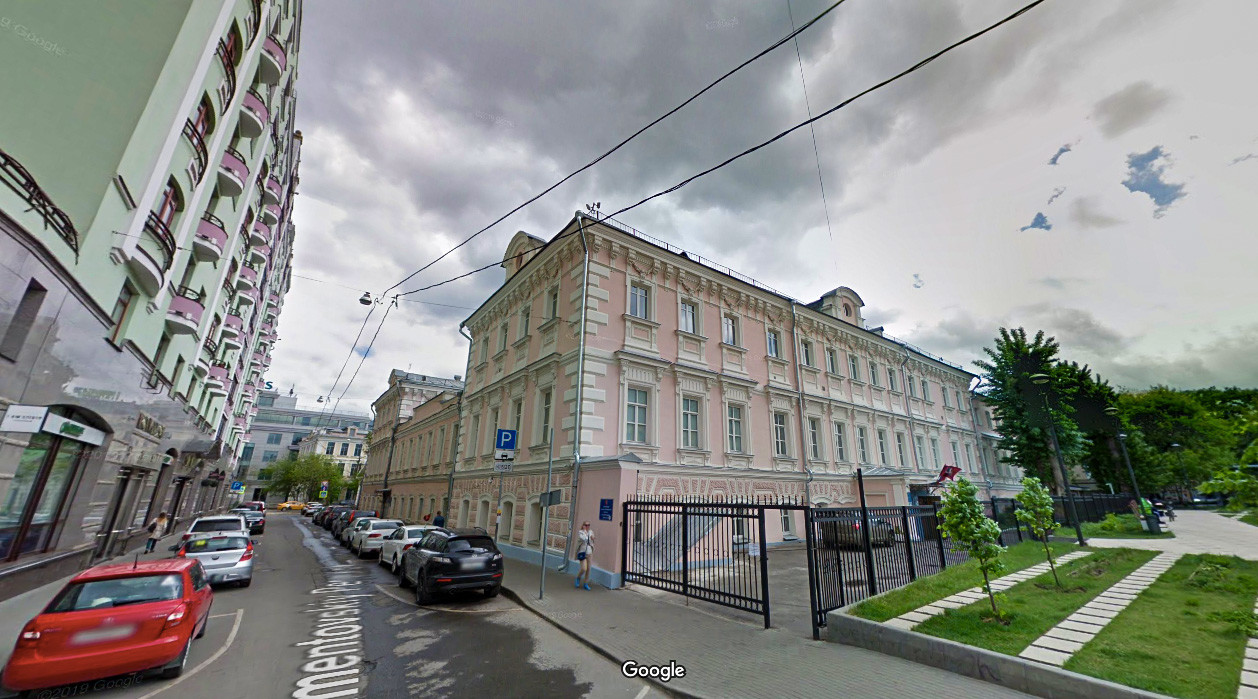 “No one could understand why people like Gubonin, who did not have a penny of money and no engineering knowledge, in two or three years became millionaires,” wrote Prince Vladimir Meshchersky, a 19th-century publicist. Here’s why: People like Gubonin made money immediately when they saw an opportunity. For example, once near Tsaritsyn (now, Volgograd), Gubonin saw a rock salt mill. A few years later, he had organized a salt-trading concession and with his capital, began controlling a good share of the salt production in Russia. Later, Gubonin would also make money on oil, coal, tram cars and even built a popular European-style resort in Gurzuf, Crimea.

In 1872, Gubonin was granted hereditary nobility and, in 1875, the rank of Active State Councillor. To express his gratitude to Emperor Alexander II, Gubonin presented him an expensive inkwell with the following inscription: “From a former peasant, now by Your grace, the Active State Councillor Pyotr Gubonin.” Apparently, the Emperor liked the gift, since he always kept this inkwell on his table. Gubonin himself, however, didn’t like to show off too much – even after he became one of the richest people in Russia, he still dressed like a Moscow merchant – in a long-skirted frock coat, jackboots and a simple hat. 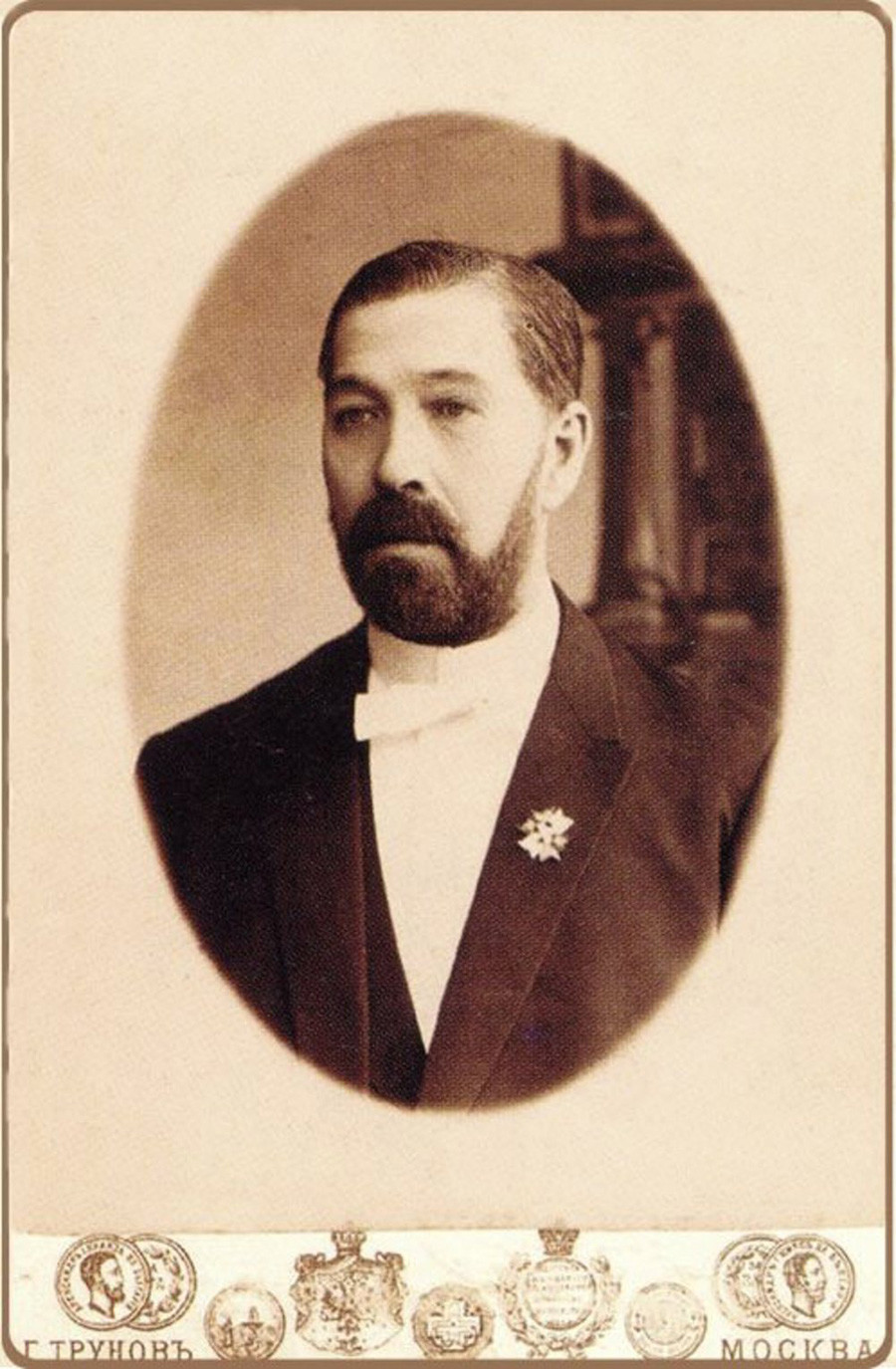 Pyotr Smirnov didn’t invent anything specific, nor was he the one who started the family business, but it was he who immortalized his name in the vodka industry – because he was an astonishing promoter. Pyotr was born in 1831 in a serf peasant family from Yaroslavl Region. His father and older brothers already had a business producing spirits and while Pyotr was still young, had bought themselves out of serfdom.

When Pyotr, who started as a salesman in his brother’s store, opened his own small alcohol factory, he relied on unpopular principles. In 1863, he started with just 10-20 men, but they produced a top-notch product. “Produce the best products from the first-class Russian material and not spare money for the most advanced production devices,” was Smirnov’s principle. 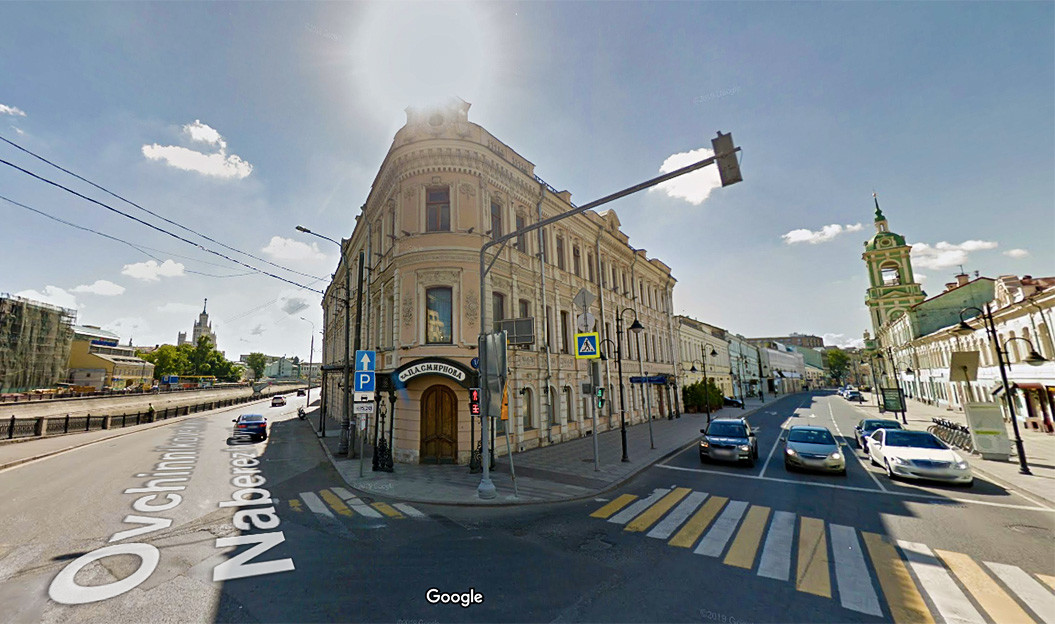 Smirnov also was cunning when it came to hiring workers. When he hired, the first thing he offered the applicants was to taste his vodka – right on the spot. At first, almost all of them refused – but after the interview was finished, some of the applicants dared to taste a shot or two – but were not hired, no matter how good they were, because Smirnov only wanted people who were willing to keep their word firmly to work for him!

Smirnov based his production and storage facilities on Pyatnitskaya Street in Moscow, where he himself also lived – in an imposing house on a corner. Smirnov used this house on the labels of his vodkas – so that even non-literate drinking folks (and there were a lot of them) would know they’re buying Smirnov’s vodka just by the image. Smirnov also hired “fake buyers” – men who walked around drinking establishments of Moscow and asked for Smirnov vodkas – bartenders eventually had to order from Smirnov, because they thought there was a strong demand for his product. 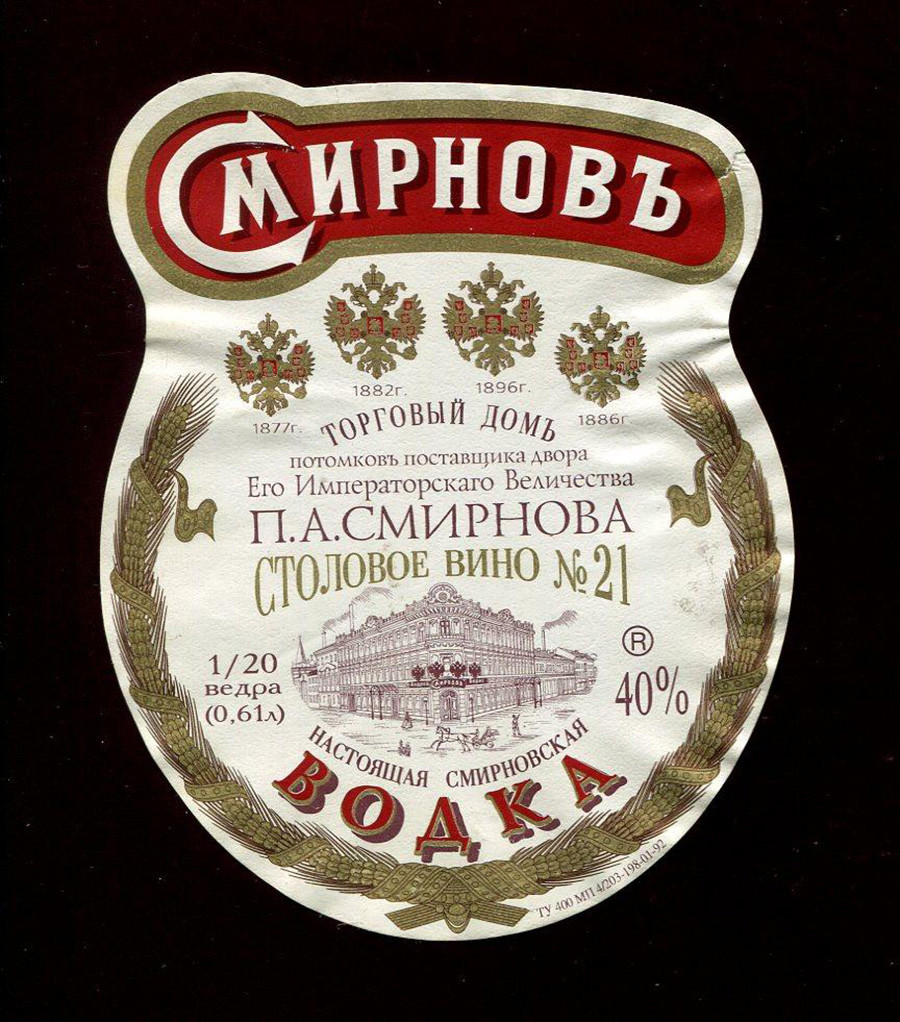 An etiquette of Pyotr Smirnov's vodka

In 1886, when Smirnov’s vodka was undeniably the most known in Russia, with over 250 men working at Smirnov’s factory and his annual turnover millions of rubles, Alexander III personally tasted Smirnov’s vodka and found it exceptional. Smirnov was then made the sole vodka supplier of the Imperial Court. By the mid-1890s, Smirnov controlled over 60 percent of the spirits market in the country. His vodka was served at the coronation ceremony of Nicholas II. Smirnov died in 1898, having left over 15 million rubles of inheritance (a large sum – at the time, a minister’s salary was about 1,500 rubles a month) to his children who continued father’s business. 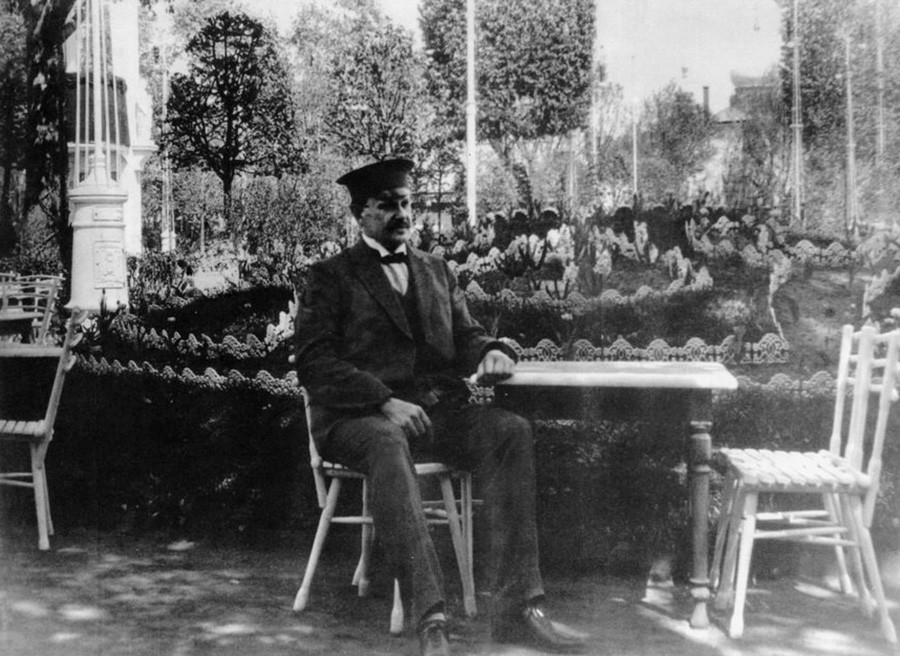 Russians were first introduced to cinema thanks to another former peasant. Yakov Shchukin was born in 1859 into a poor peasant family in Yaroslavl Region – they were so poor that at age 14, Yakov had to leave his home and went to live and study by the Nikolo-Ugreshsky Monastery near Moscow, after which he became a medical assistant. However, this didn’t fascinate Yakov much, so he became a simple salesman in one of Moscow’s public gardens.

As his business got better, Shchukin moved to become the owner of a snack bar in one of Moscow’s popular theaters called ‘Paradis’ (still active today as the Mayakovsky Theater). The second half of the 19th century was the time when the theater industry boomed in Russia. By the age of 30, Yakov was rich enough to rent the whole theater – and he suddenly switched from selling beverages to being an full-fledged entrepreneur, inviting European musicians and opera singers to perform in Moscow. But his most known accomplishment was the ‘Hermitage’ public garden. 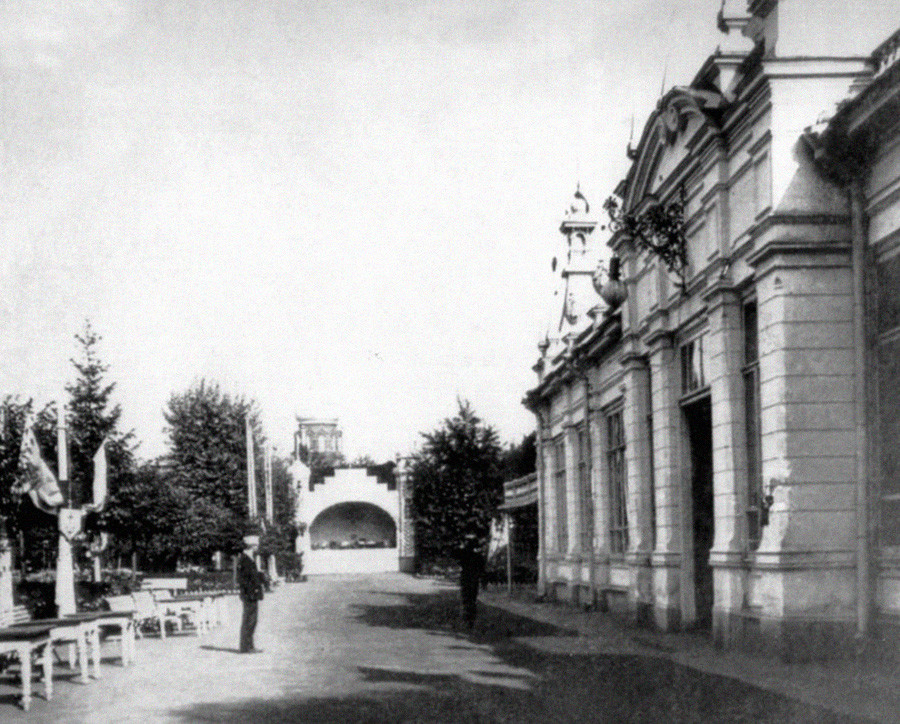 Shchukin opened the ‘Hermitage’ in 1894 on a vacant lot in the center of Moscow, near Karetny Ryad Street, where carriages were sold. The territory was littered with derelict carriages and their parts – allegedly, Shchukin required 50 thousand carriages to remove all the trash. But what he made after was astonishing.

The ‘Hermitage’ garden was the first in many ways – the first to have an irrigation system and the first to have its own diesel power plant to provide lighting at night. Shchukin was so sure of the success that he spent all his money organizing the garden and, in order to print the first theater posters, he even pawned a fur coat.

The programme of the theater, the garden’s main attraction, was eclectic: operettas, vaudevilles, drama performances, clown shows and even some lewd material: a 1908 poster said: “A farce from the intimate lives of current political figures of the Middle East and Paris”. While waiting for the performance, the garden’s guests could have fun on the park’s rides, sit in a restaurant or drink tea in the buffet – and in winter, go ice skating.

Shchukin’s ‘Hermitage’ became undeniably the best place in Moscow to hang out. In 1903, Shchukin even invited legendary magician Harry Houdini to perform. “He would be locked in a cage and escape from it in public; then he would be put in a straitjacket, placed in a box, nailed shut — and in a few moments, the conjurer would be free!” advertising for Houdini’s Moscow performance proudly boasted.

However, the political climate in Russia and Europe worsened at the start of the 20th century. But the clever Shchukin foresaw what was happening and, in 1917, sold his garden (which was still profitable) and left with his family for Crimea and then, Constantinople, where he died in 1926, having escaped all the horrors of the Russian Revolution. To this day, Shchukin’s garden is still a popular place among Muscovites and his monogram can still be found on the garden’s buildings and vintage lamp posts.