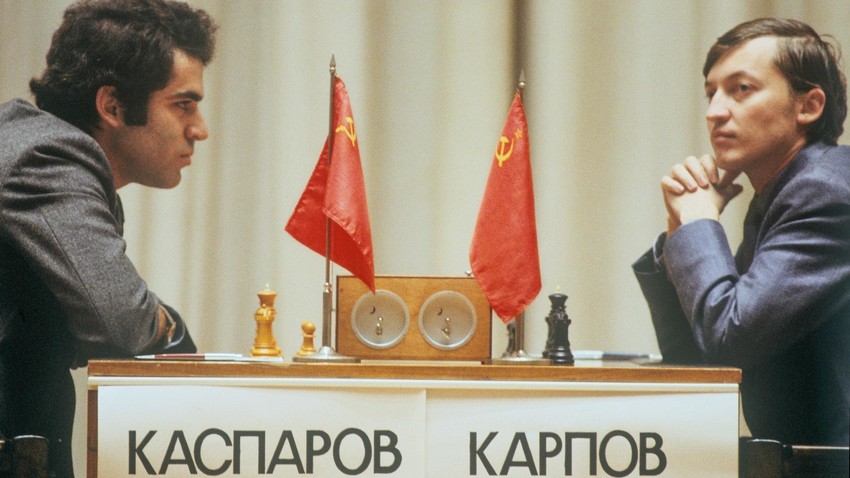 Boris Kaufman/Sputnik
The world is enjoying a boom in chess playing following ‘The Queen’s Gambit’ TV series’ sweeping success. We’ve boiled down a list of Soviet chess legends who proved that chess is mental “body-building on steroids”.

Kasparov is known as one of the greatest chess players of all time. He was born in the former Soviet republic of Azerbaijan to a Jewish father and an Armenian mother. 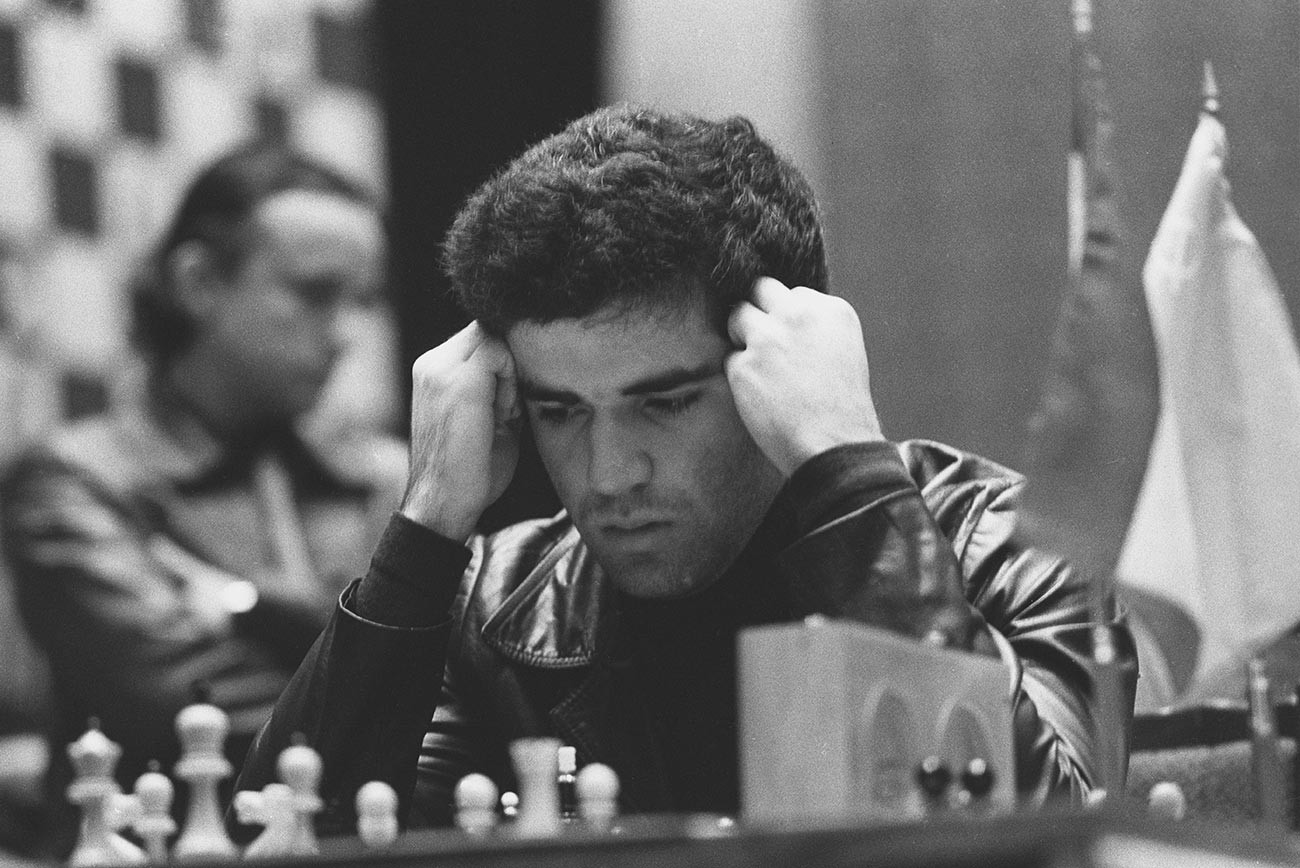 Garry Kasparov at the 12th Moscow Chess Tournament in 1982.

Garry began playing chess when his peers were still attending nursery. At 12, Kasparov proved he was for real and became a Soviet youth champion. Then, he made international headlines in 1985 as the youngest world chess champion in history.

The Soviet chess genius set record after record, defending his title five times, including a dramatic series of games against Anatoly Karpov, his staunchest rival. Their epic matches kept viewers on the edge of their seats, becoming one of the most spectacular events of the games in history.

Kasparov, known for his unmerciful style of play, remained unchallenged as World Champion from 1985 until 1993. He has won as many “Chess Oscars” as best player as James Cameron’s ‘Titanic’ – eleven. The chess grandmaster broke Bobby Fischer’s historical rating record in 1990, while his own remained unbroken until 2013. 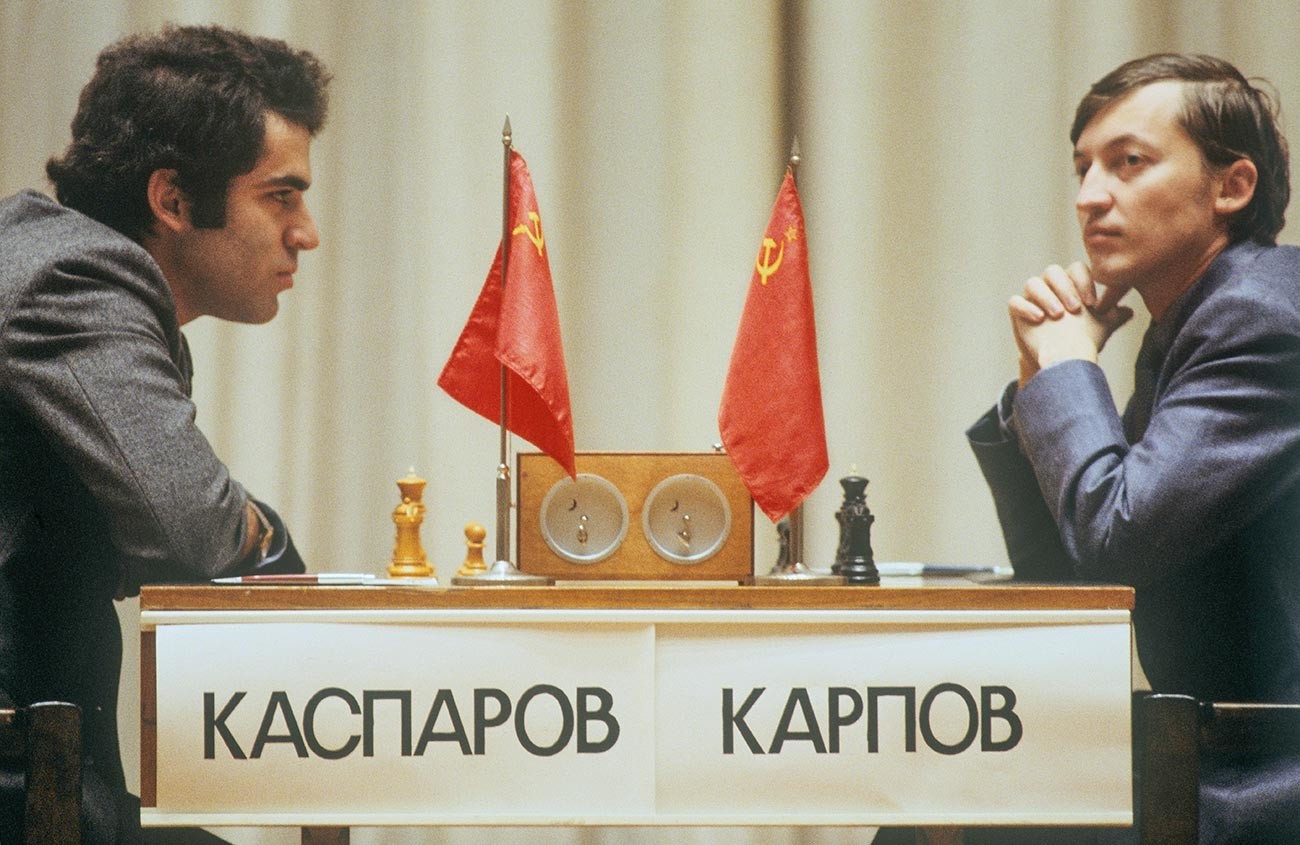 In 1996, Kasparov decided to challenge an IBM custom-built chess computer, known as ’Deep Blue’. Kasparov came out the winner in the first battle between humans and machines. During a rematch, after the machine’s intelligence was upgraded, Kasparov resigned in the last game of the six-game match, granting Deep Blue the win.

In 2000, he lost a 16-game championship match to Vladimir Kramnik.

Botvinnik is widely regarded as the father of the Soviet chess school. His famous students include world champs Anatoly Karpov, Garry Kasparov and Vladimir Kramnik, just to name a few. 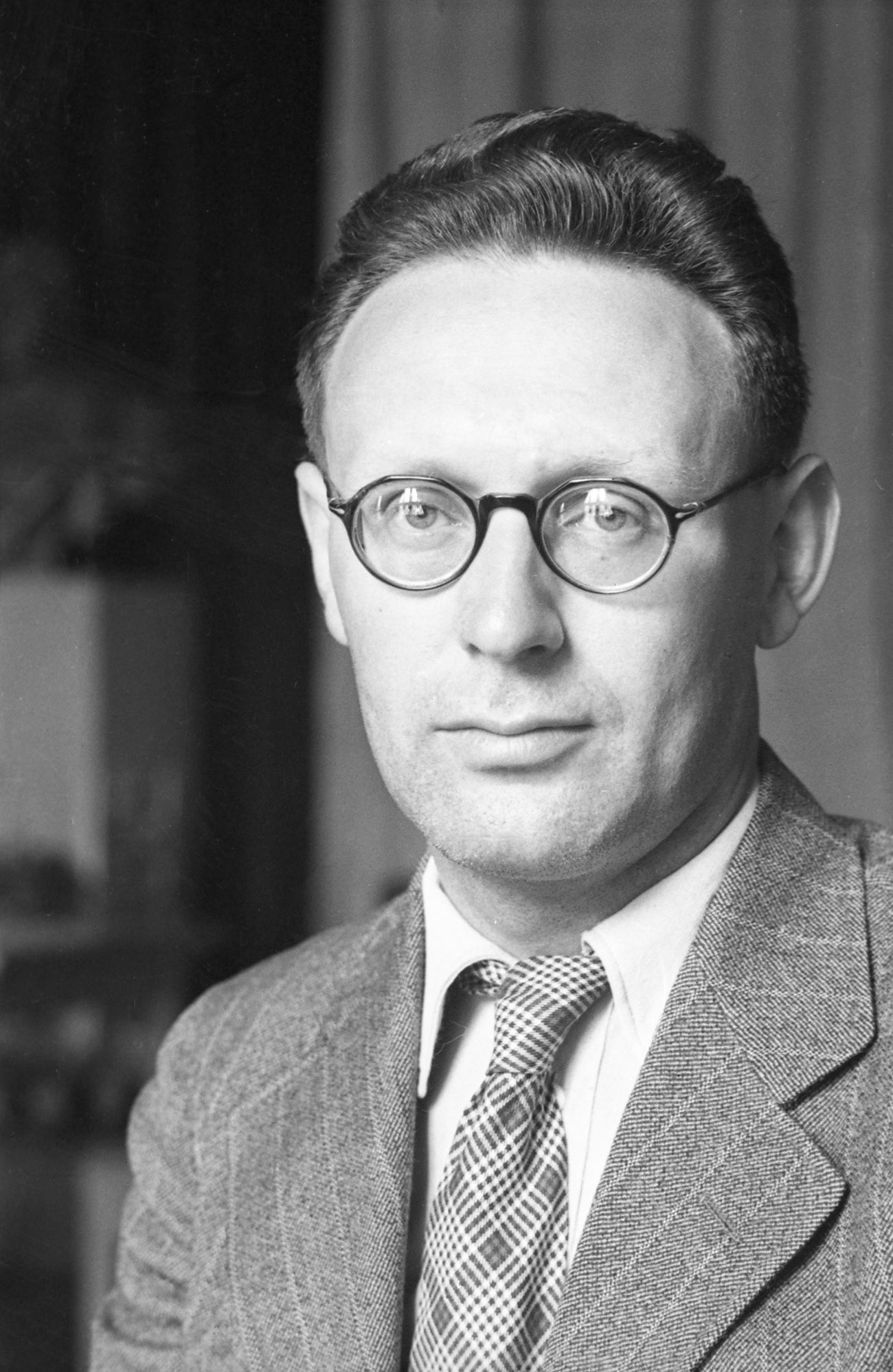 The father of the Soviet chess school, Mikhail Botvinnik.

Born into a family of a Jewish dental technician, Botvinnik spent his childhood in Leningrad (now St. Petersburg) and took an active interest in chess when he was already 12. Two years later, the young boy defeated the then world champion, José Raúl Capablanca, in a simultaneous exhibition game. After that, the wins kept coming, one after another.

In 1931, Botvinnik, praised for his endgame technique, won the USSR chess championship for the first of seven times. He was only 20 years old.

In 1932, the chess player graduated from the Leningrad Polytechnic Institute as an electrical engineer (throughout his career, Botvinnik combined chess competitions with scientific work in the field of electrical technology).

In 1948, he won the world championship (organized for the first time by FIDE). Botvinnik lost the title (to his counterpart Vasily Smyslov) in 1957, but regained it soon after. In 1960, he was defeated by Mikhail Tal, only to regain his title once more in 1961. Botvinnik was finally challenged by the Armenian Tigran Petrosyan, who became World Champion in 1963. Botvinnik abandoned competing for the world title, but continued to play chess at the level he aspired to be for more than three decades. 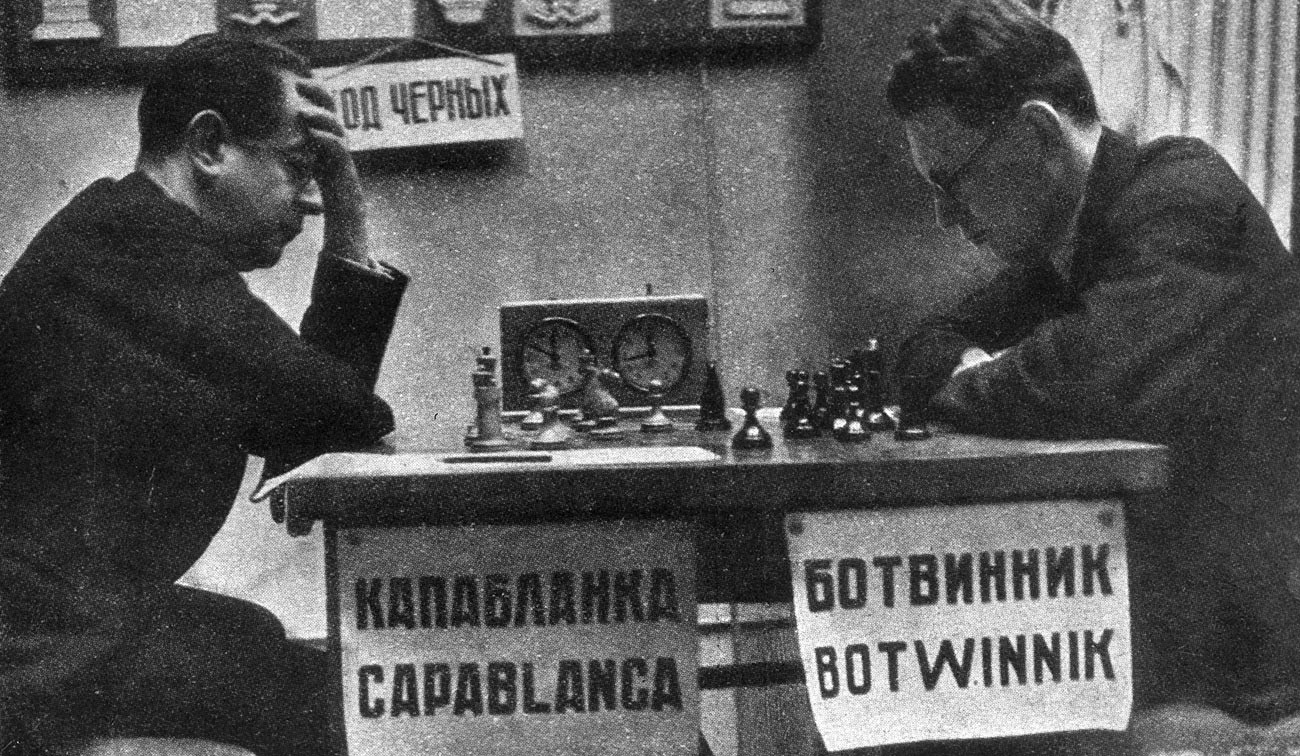 In 1969, there were talks of a match between him and Bobby Fischer. Sadly, it never took place, as the two chess legends failed to come to an agreement. “Chess is not only a game of figures, but also of people - psychology matters,” Botvinnik said. The sixth World Champion was a man with a big ego and high expectations.

READ MORE: Here’s why chess was so EXTREMELY popular in the USSR (PHOTOS)

Botvinnik changed the perception of the game, developed his own method of preparation for competitions, wrote numerous books on chess and never stopped growing professionally. His role in promoting chess in the Soviet Union is without parallel. His brainchild, the Botvinnik Chess School, helped raise a generation of chess players.

Born in the town of Zlatoust in the Urals, Anatoly learned chess at the age of four. At twelve, he enrolled in the prestigious Botvinnik Chess School. 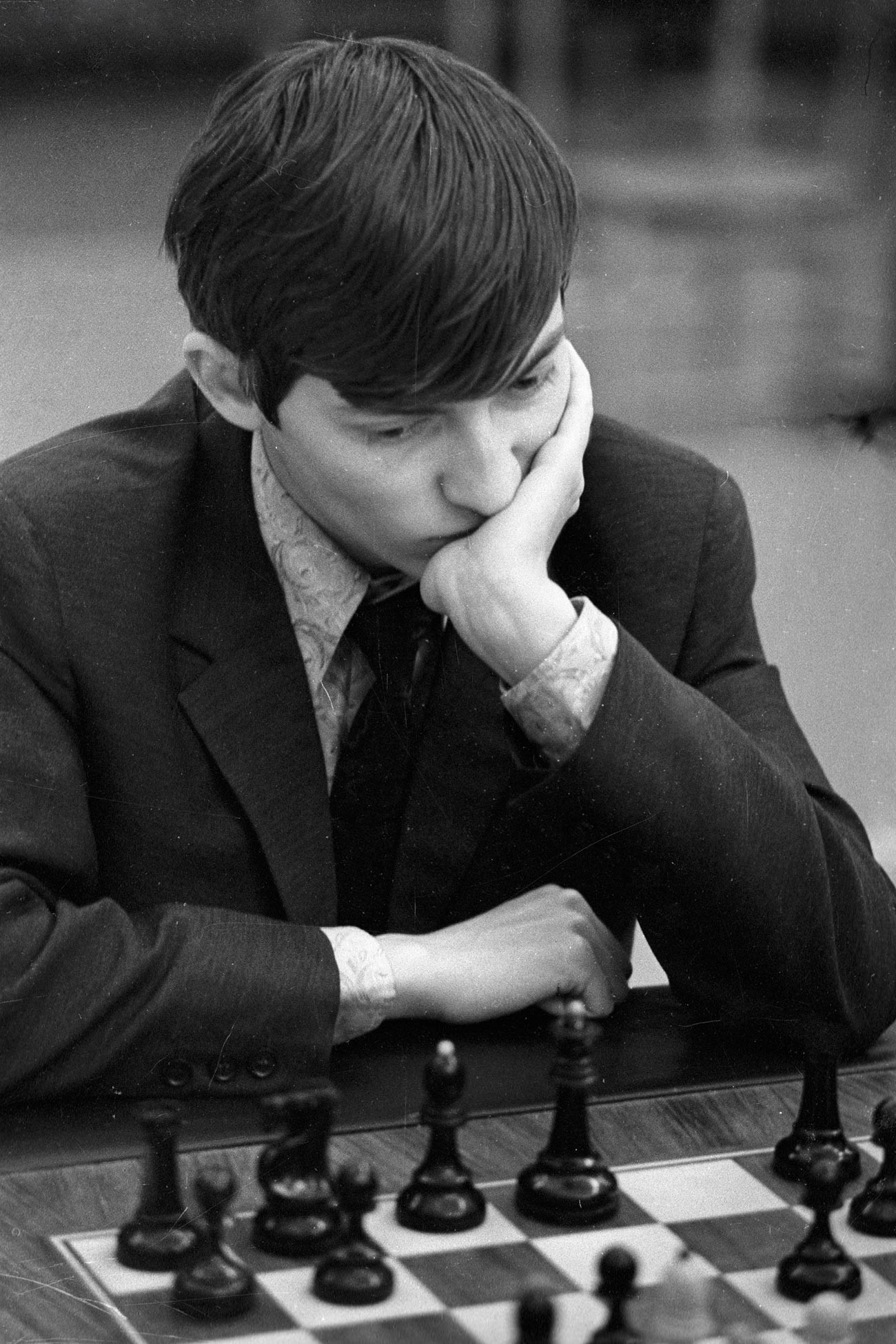 Karpov won the World Junior Championship in 1969. Shortly after, he became an International Grandmaster. As a world championship candidate he defeated Viktor Korchnoi in 1974 to earn the right to meet face to face with World Champion Robert Fischer. But the American refused to face the Soviet challenger and Karpov automatically became the 12th World Chess Champion. He then successfully defended his title against Korchnoy in 1978 and 1981.

The series of games of the two “heavyweights” Karpov and Kasparov had were among the most exciting chess events of the 1980s. The two chess wizards played a total of 144 games for the world championship (Kasparov had 21 wins, Karpov had 19 wins, 104 were draws). 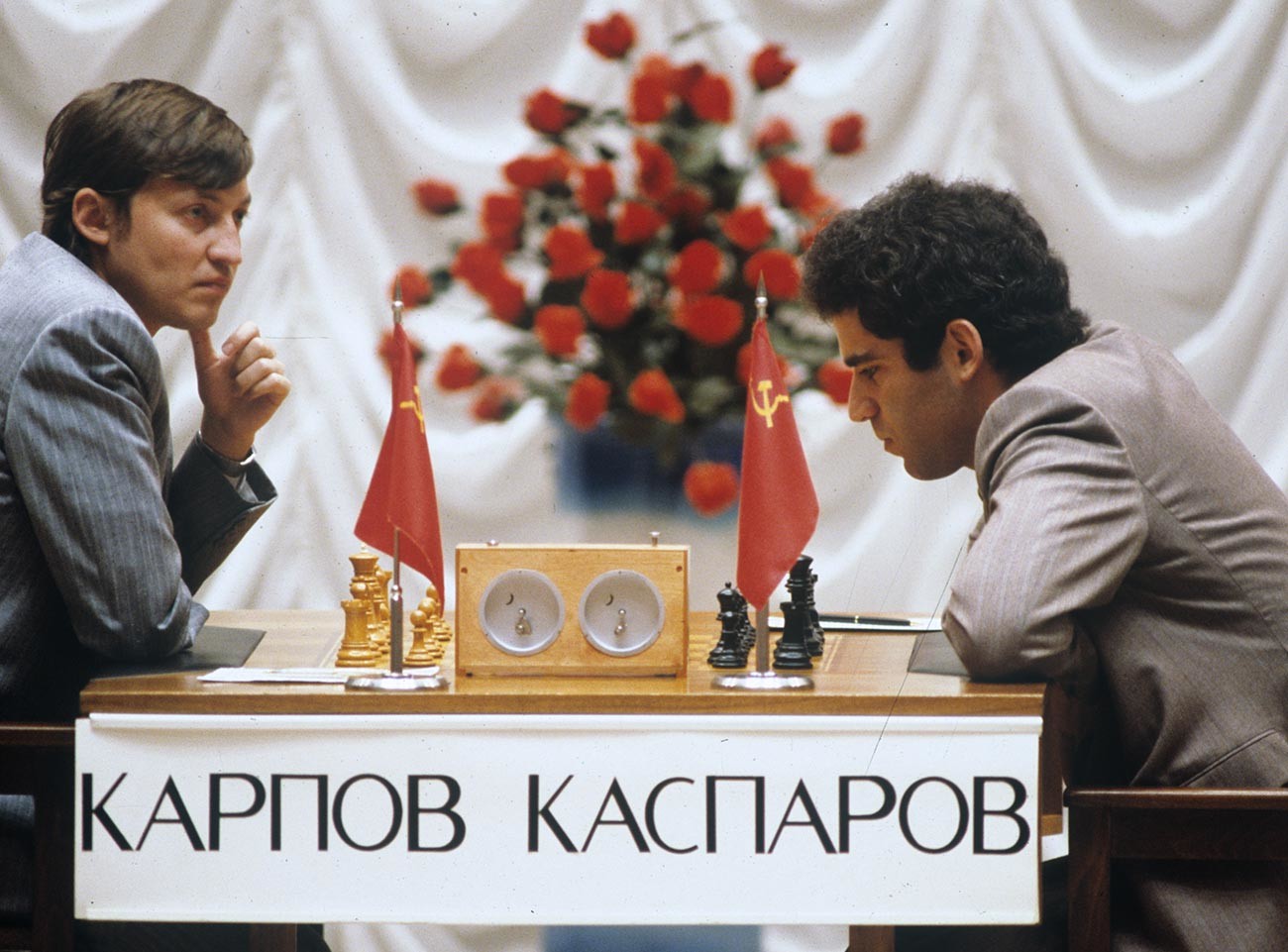 In 1985, Kasparov won and defended the coveted title in the two following matches. In 1993, Karpov had moved mountains to regain the World Champion title, which he held until 1999. In 2002, Karpov finally got his revenge and crushed Kasparov in a quick exhibition match.

From a starting point on a chessboard, nothing was truly impossible for Alekhine, known for his tactical brilliance and ability to break the deadlock in complex situations. He began playing chess when he was around seven (his elder brother being his fist teacher). 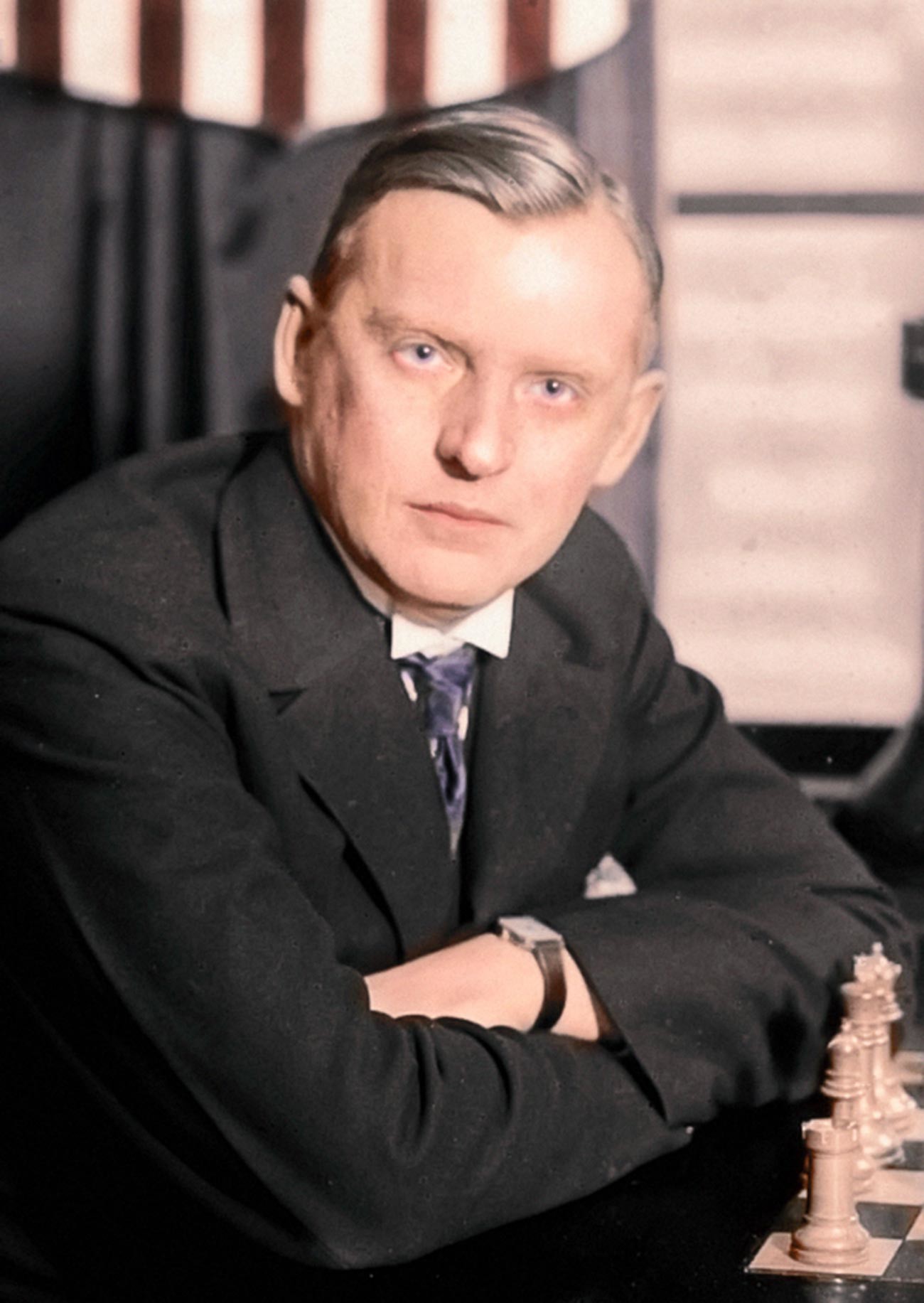 Alekhine left a huge legacy of 20 books about chess.

Alekhine’s adult life was full of tragic events. He witnessed two world wars, lost his brother and sister and, at some point, was marked for execution as a spy by Soviet secret police.

In the 1920s, Alekhine became one of the contenders for the chess crown. After emigrating to France in 1921 (he was fluent in six languages) Alexander began to win tournament after tournament. Alekhine made waves after he broke the world blindfold chess record three times, in 1924, 1925 and 1933. In 1927, after beating José Raúl Capablanca, Alekhine ascended the chess throne. 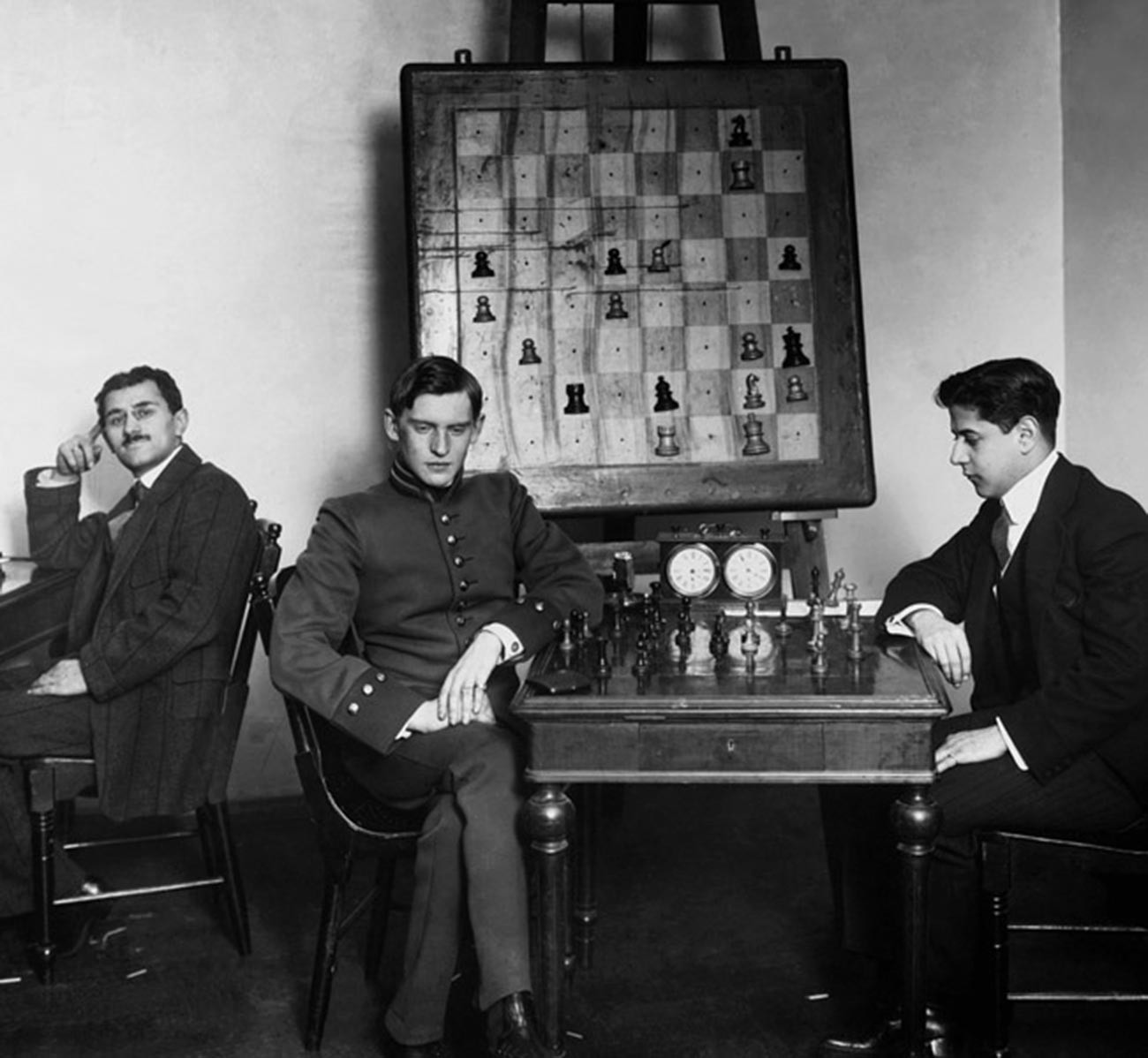 The fourth world champion held the title for 17 long years (becoming the only world champion to die with that distinction). In total, he played five matches for the world championship: after defeating Capablanca, he defeated Efim Bogoljubov twice; in 1935 he lost to Dutch chess grandmaster Max Euwe; but in 1937 took revenge. In total, Alekhine won 81 out of 112 competitions.

After WWII, Alekhine was supposed to cross swords with Mikhail Botvinnik, but that game had never happened. Alekhine’s life ended abruptly in Portugal, shortly after an agreement on the Alekhine-Botvinnik World Championship match had been reached.

Alekhine left a huge legacy of 20 books about chess. Several important opening variations bear his name, with the most remarkable known as ‘Alekhine’s Defense’. After all, “chess is a matter of vanity,” he believed.

He did what others could not do - defeated Garry Kasparov to win the Professional Chess Association world championship in 2000. Like Kasparov, Kramnik learned to play chess when he was only four years old. His rise to fame was meteoric, with the chess prodigy becoming champion of the small southern Soviet town of Tuapse at just seven. Four years later, he was invited to study at the Botvinnik school. 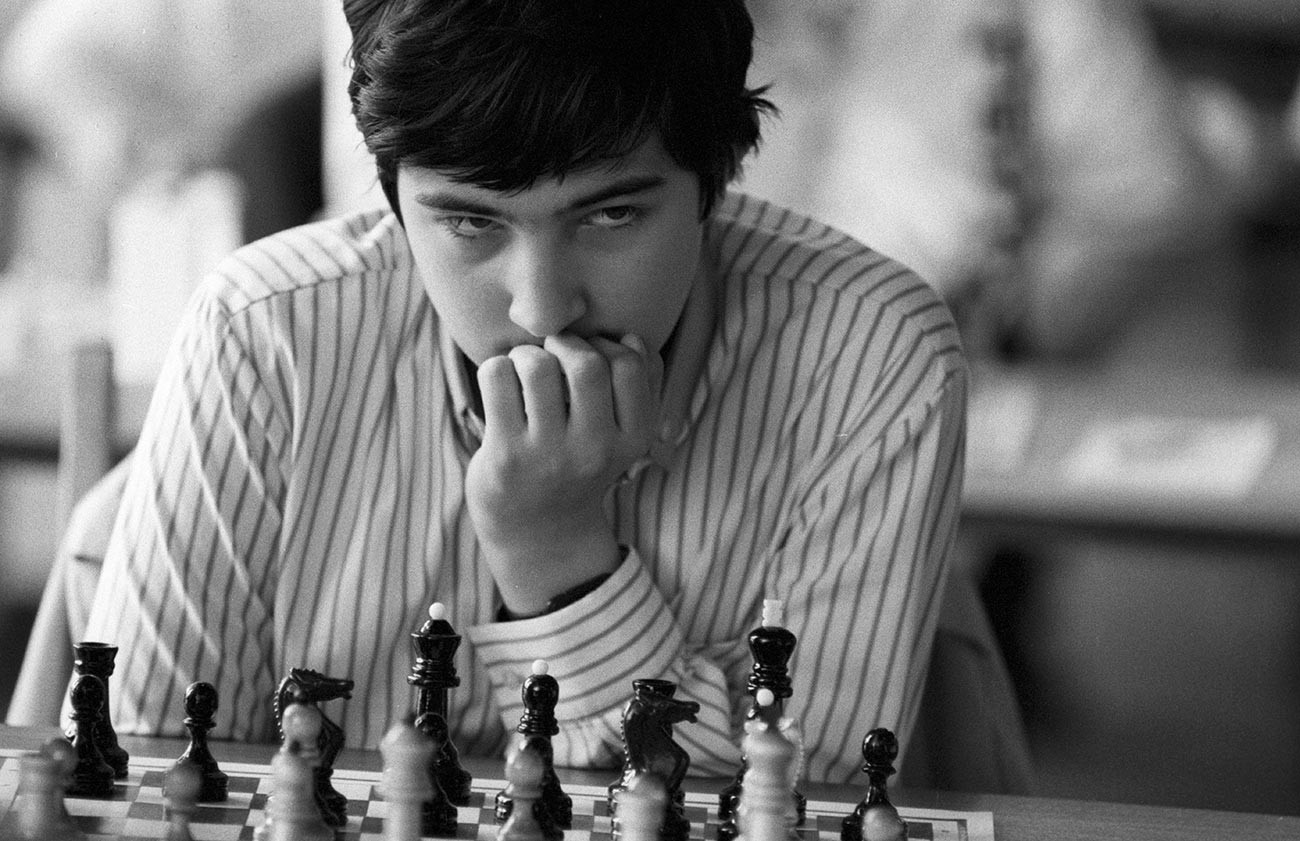 In 1996, Kramnik grew to become the world number-one rated player.

Kramnik was the talk of the town after his gold medal win for the Russian team in the 1992 Manila Olympiad. Back at the time, he was just a FIDE Master, but Kasparov strongly insisted on his participation. And he was right! Kramnik scored eight wins, one draw and no losses, with the Olympiad launching the southern boy to national fame.

In 1996, Kramnik grew to become the world number-one rated player (thus, he became the youngest ever to reach the highest level, breaking Kasparov’s previous record.) This record stood for 14 years until being broken by Norway’s Magnus Carlsen. Kramnik defended his crown in 2004 and defeated the then reigning FIDE World Champion Veselin Topalov in 2006. In 2007, however, Kramnik lost the title to India’s Viswanathan Anand. 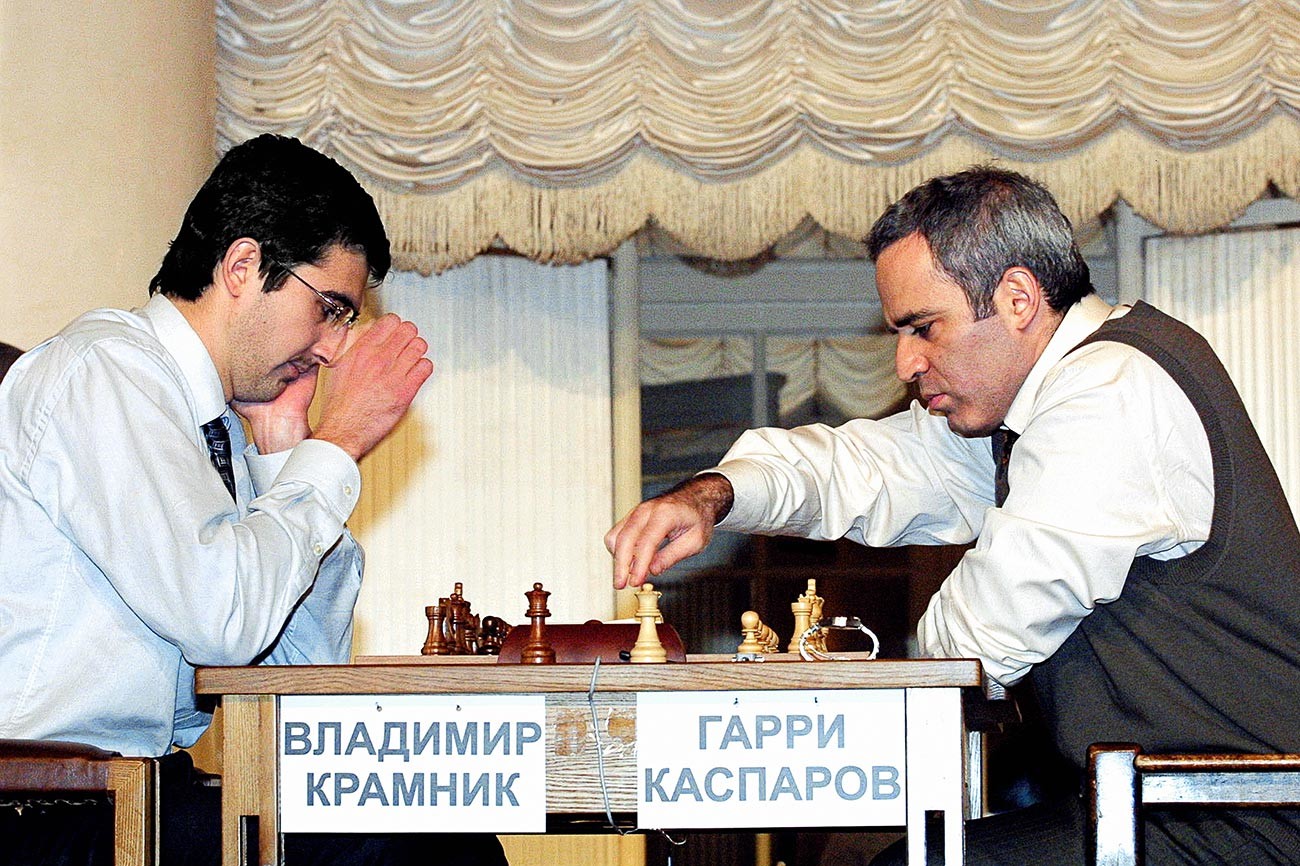 “Chess is like body-building. If you train every day, you stay in shape. The same with your brain – chess is a matter of daily mental training,” he told sportbox.ru. In 2019, Kramnik announced his retirement as a professional chess player. “I felt I could no longer give my best,” he admitted.

Mikhail, a Latvian-born Jewish boy, learned to read when he was just three. Three years later, out of curiosity, he learned chess fundamentals from his father. His efforts paid off and Tal won his first Latvian Championship in 1953, earning the title of Soviet Master the following year. In 1957, he became the youngest-ever Soviet Champion. 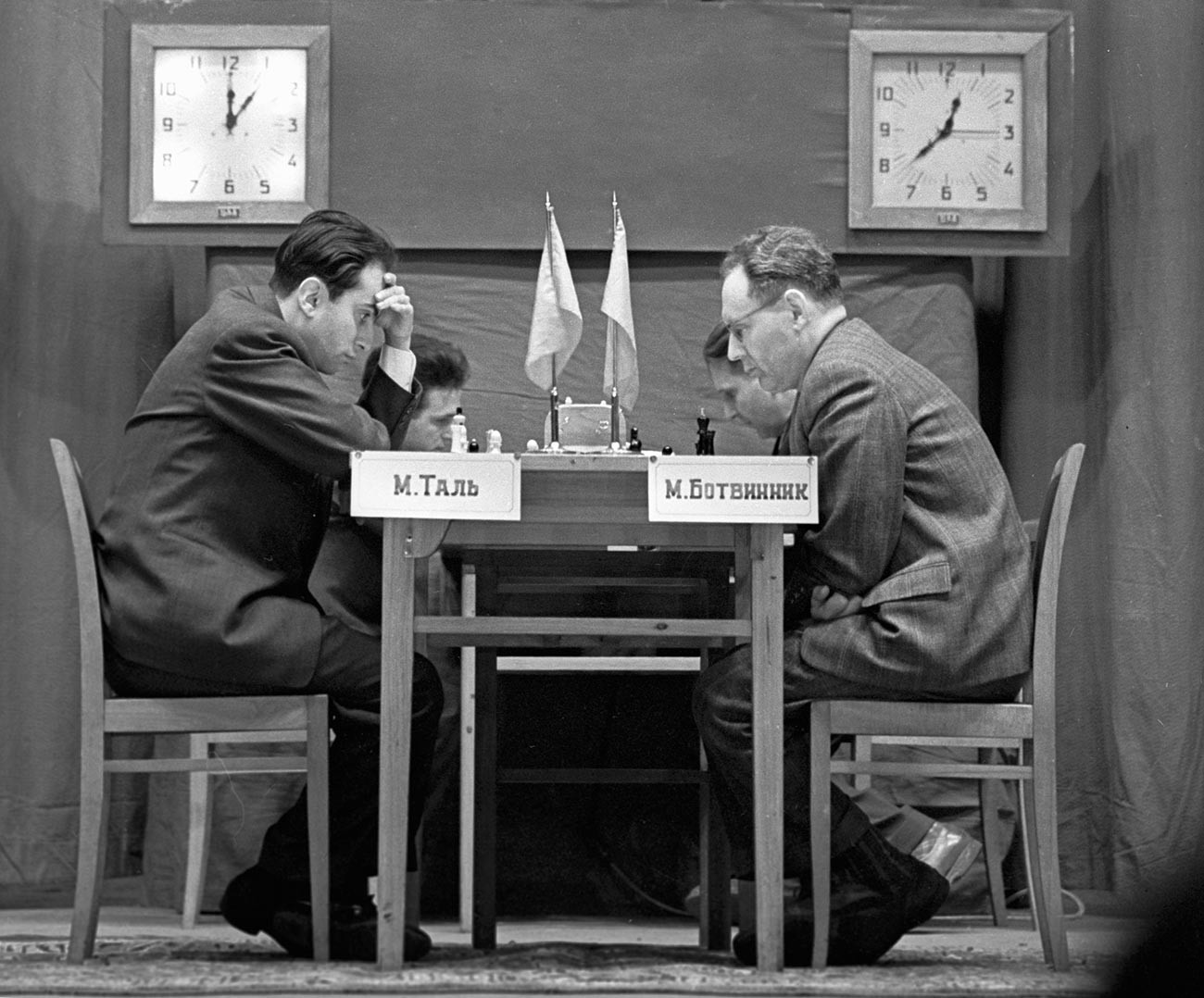 Tal played in 21 Soviet Championships, winning six times. He won several strong tournaments in Europe, but his big breakthrough occurred in 1960. Tal, known for his creative attacking style, defeated Mikhail Botvinnik to become the youngest World Chess Champion (his record was only broken by Kasparov 25 years later). Due to continuous health problems, 24-year-old Mikhail lost the rematch with Botvinnik in 1961. 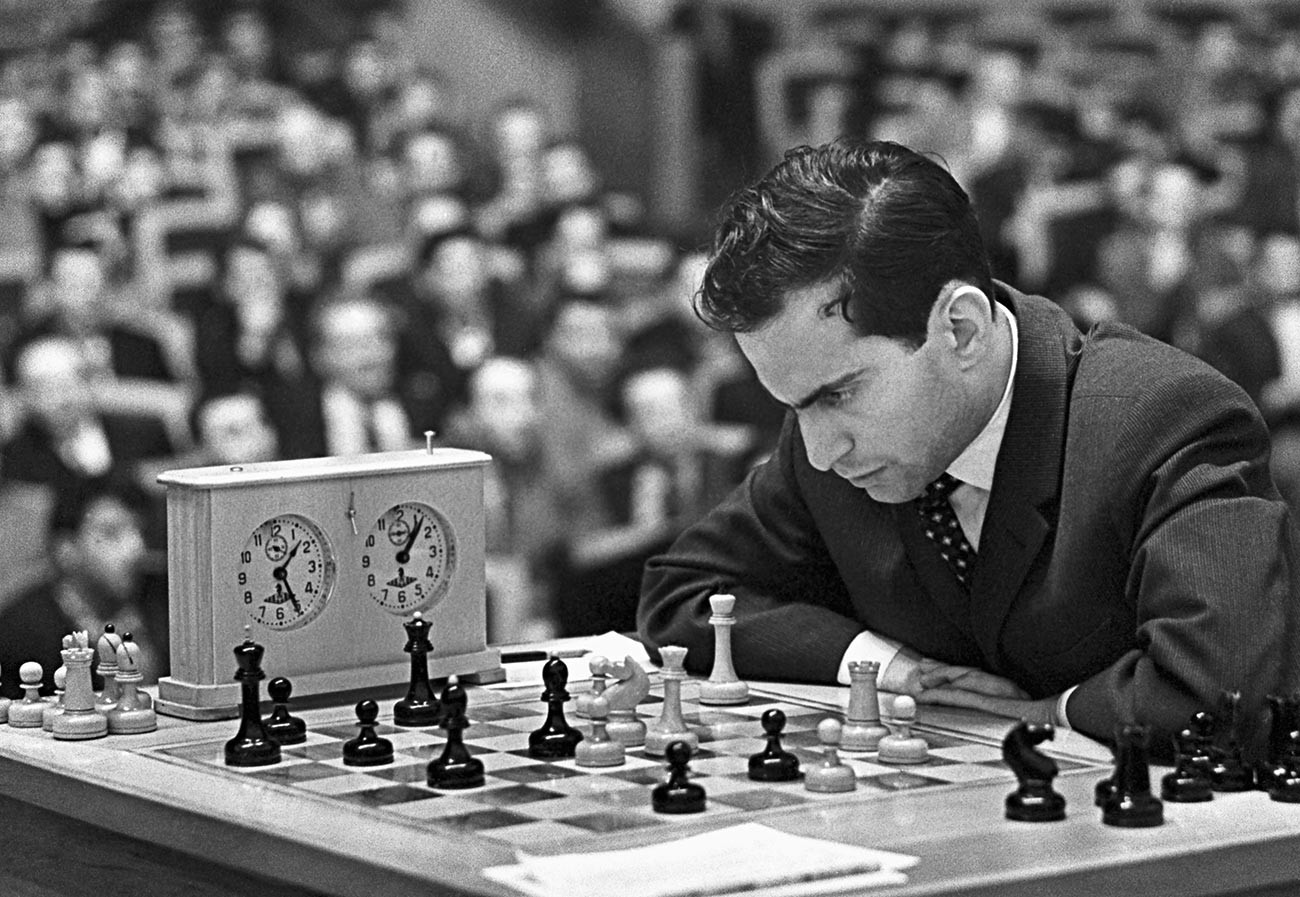 The eighth World Chess Champion never qualified for a title match again. He continued to play even after his kidney was removed, setting new records, playing nearly a hundred consecutive games without a loss. His indefatigable genius never retired and he never had a fear of being mated.

Tal played Anatoly Karpov 22 times, half of them when Karpov was reigning World Champion. In 1992, Tal left the hospital to take part at the Moscow blitz tournament, in which he defeated Garry Kasparov. The indefatigable chess player passed away one month later.

While other kids spent most of their time hanging out with friends playing video games, Sergei would sit down quietly at his chessboard in Crimea’s Simferopol, solving tactical puzzles. 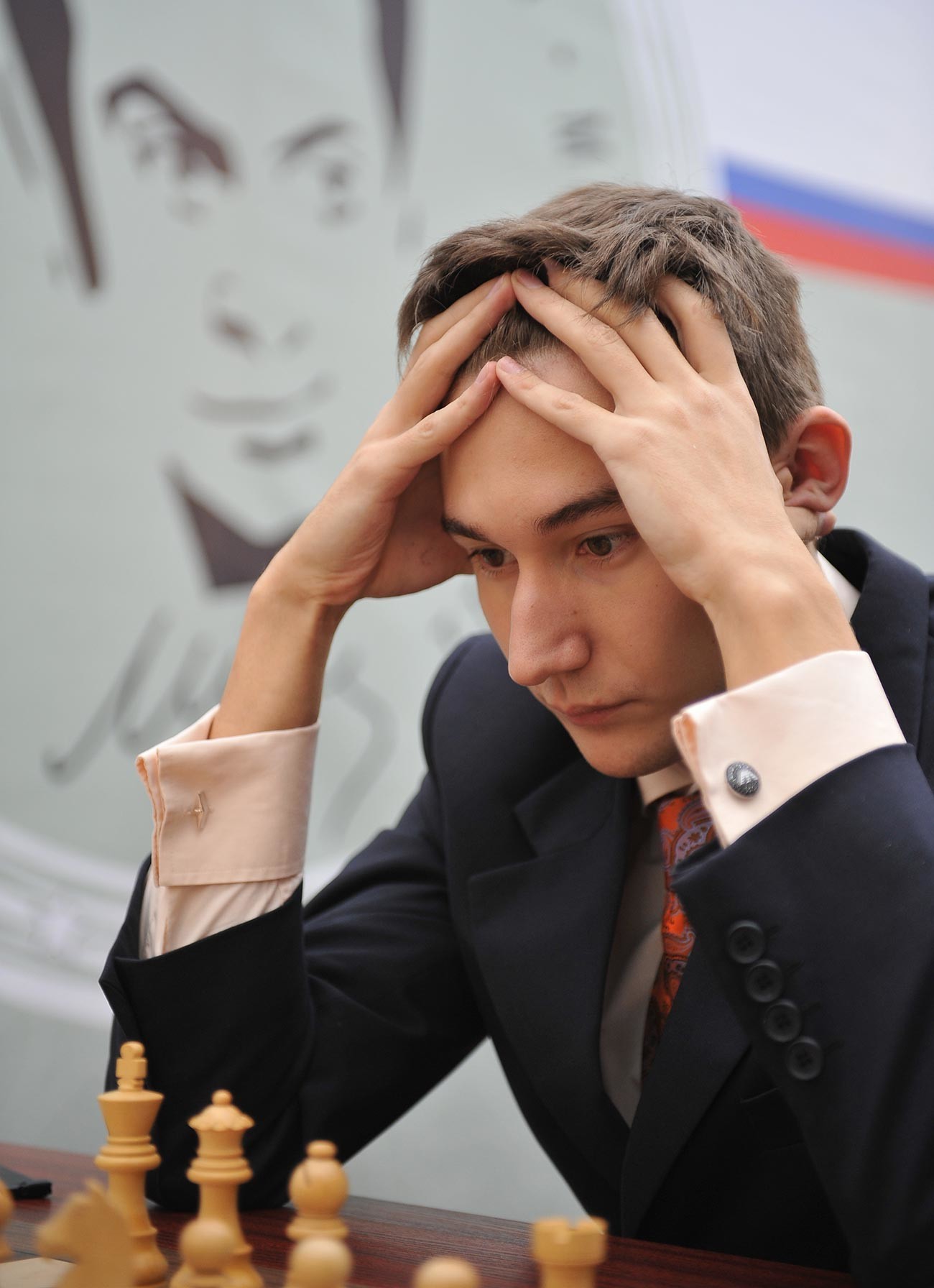 At 12, Karjakin entered the Guinness Book of World Record for becoming the youngest Grandmaster in history.

It wasn’t all for nothing. He learned to appreciate the intensity and complexity of chess positions and strategies. At 12, Karjakin entered the Guinness Book of World Record for becoming the youngest Grandmaster in history. Hungry for more success, he won a gold medal of the World Chess Olympiad at the age of fourteen, winning praise for his dynamic and defensive style of play.

READ MORE: Who is Borgov from the latest Netflix show The Queen’s Gambit?

The Russian chess prodigy, nicknamed the ‘Minister of Defense’, managed to push none other than the unbeatable Magnus Carlsen to tiebreakers in the 2016 World Chess Championship. Karjakin (who is the same age as Carsen) was just two steps away from winning the crown. He won the 8th game and lost the 11th, making it to a tie-break. Carsen (who became the world champion after beating Viswanathan Anand in 2013) reclaimed his title, however. 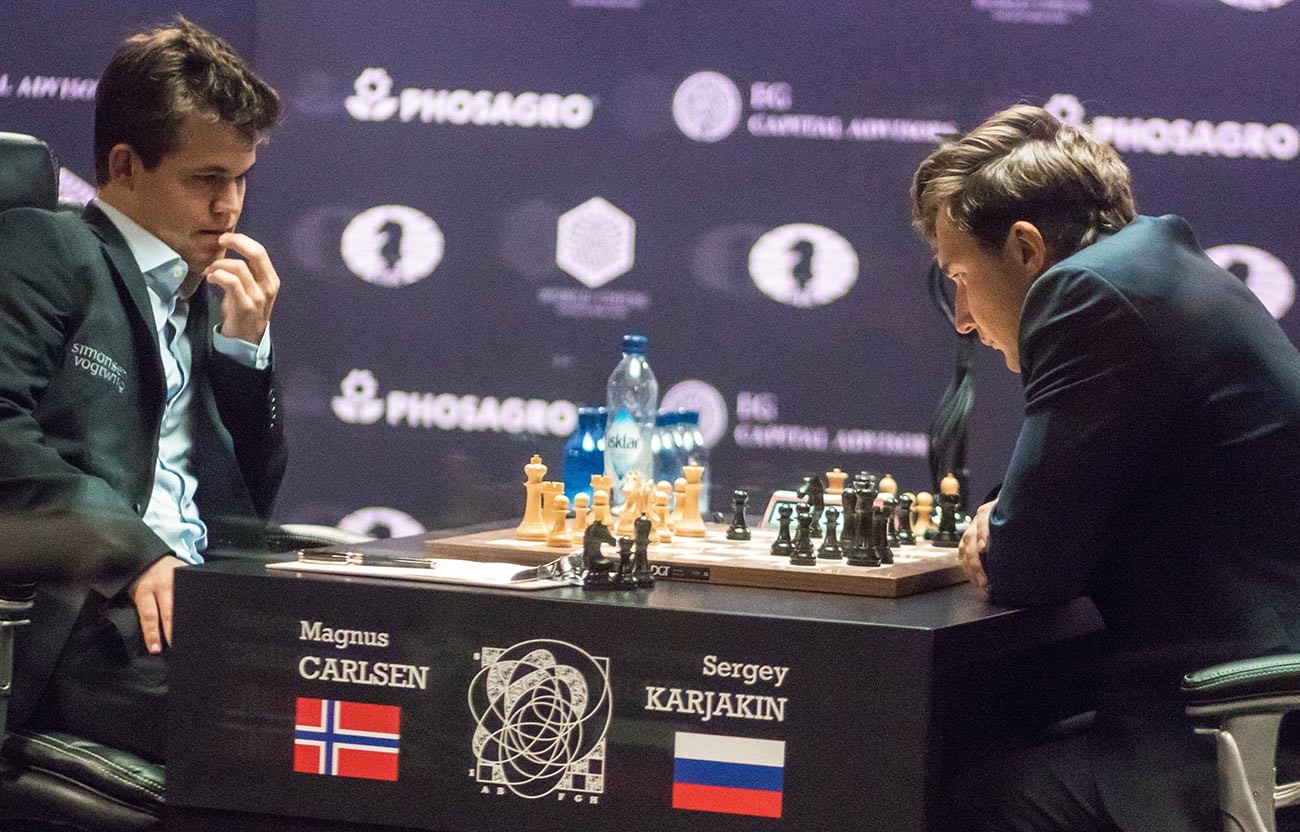 And yet, chess buffs believe that one of the strongest players of the 21st century has all the chances to rise to the occasion to become the best chess player in the world. Check!