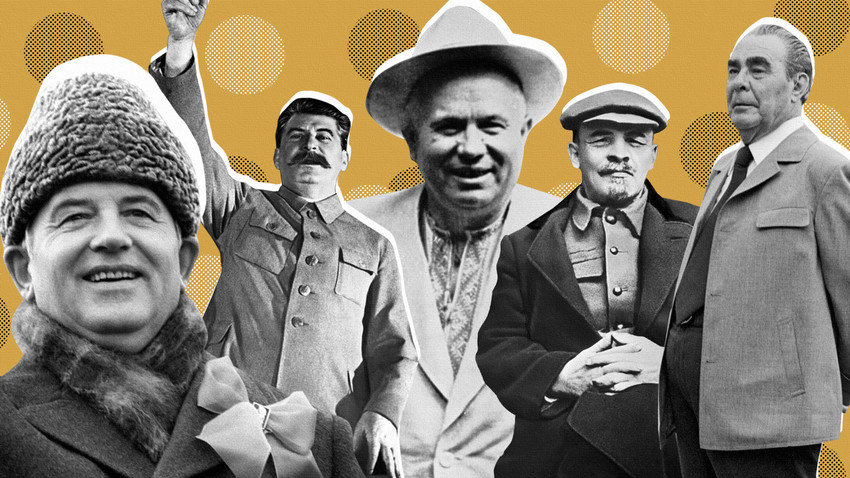 Alexander Chumichev and Yuri Lizunov, Valentin Sobolev/TASS; Sputnik; Petrov/Sputnik
What political leaders wear is how they present themselves to others. In the USSR, being well dressed had little to do with having a sense of style. At the end of the day, it was merely a question of power and possibilities.

Lenin remained true to his “less is better” credo when it came to personal accessories. As much as Sherlock Holmes’ signature deerstalker’s cap personified detective work, Vladimir Lenin’s unmistakable flat cap became synonymous with the Bolshevik victory. The founding father of the Soviet state, who always wore an impeccable 3-piece suit and spoke fluent English, never parted with it. 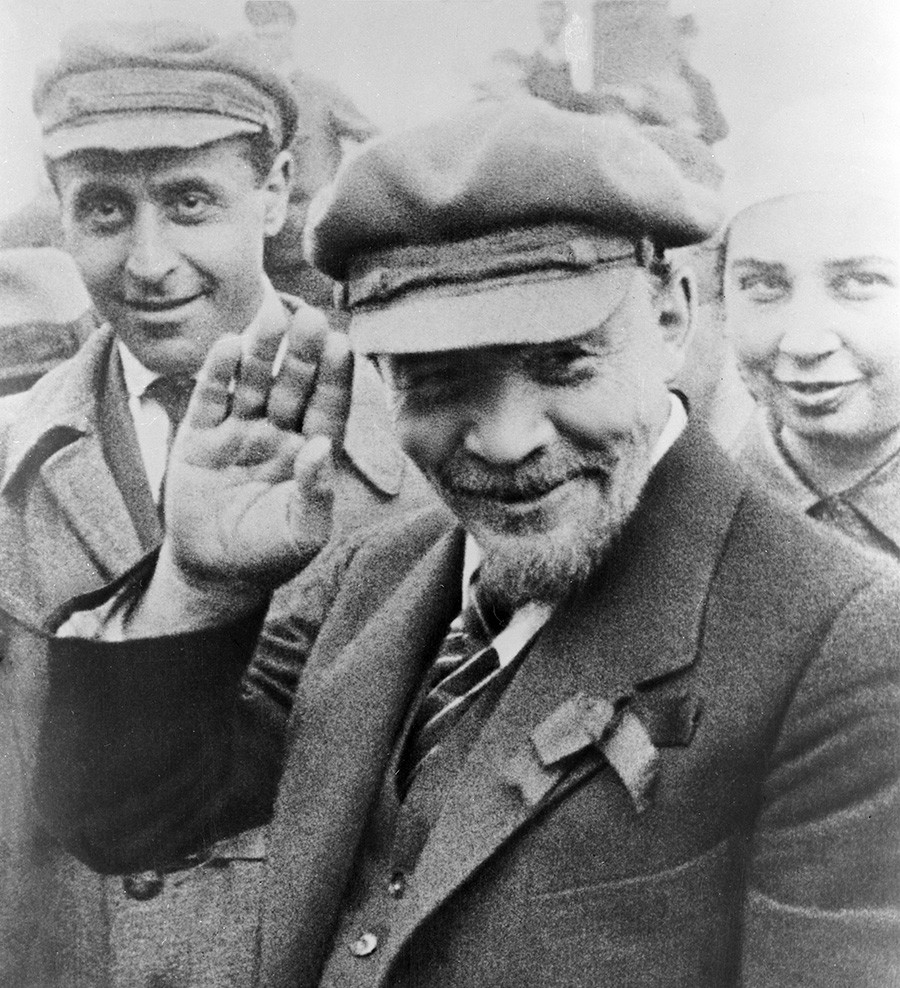 He probably first fell in love with the cap during his voluntary exile in London (where he edited 17 issues of his famous newspaper ‘Iskra’ in 1902) or borrowed the trend from Maxim Gorky, the author of ‘The Lower Depths’, who lived in Capri at a time when mafiosi from the southern Italian cities wore stylish caps on a daily basis. Lenin’s cap, in turn, put him on a par with the proletariat – soldiers, peasants and workers storming the barricades while trying to take power by force at any cost in 1917.

The charismatic mastermind of the Bolshevik Revolution, known for his gift of magnetizing huge crowds, knew how to capture the hearts and minds of the people with quick solutions and sound promises. At just 1.65 cm (5’5 ft), Lenin was a man of modest height. He made up for his small stature with intellectual strength, polka-dot ties and his flat cap. Those little accessories were whimsical enough to reveal Lenin’s personal sense of style. 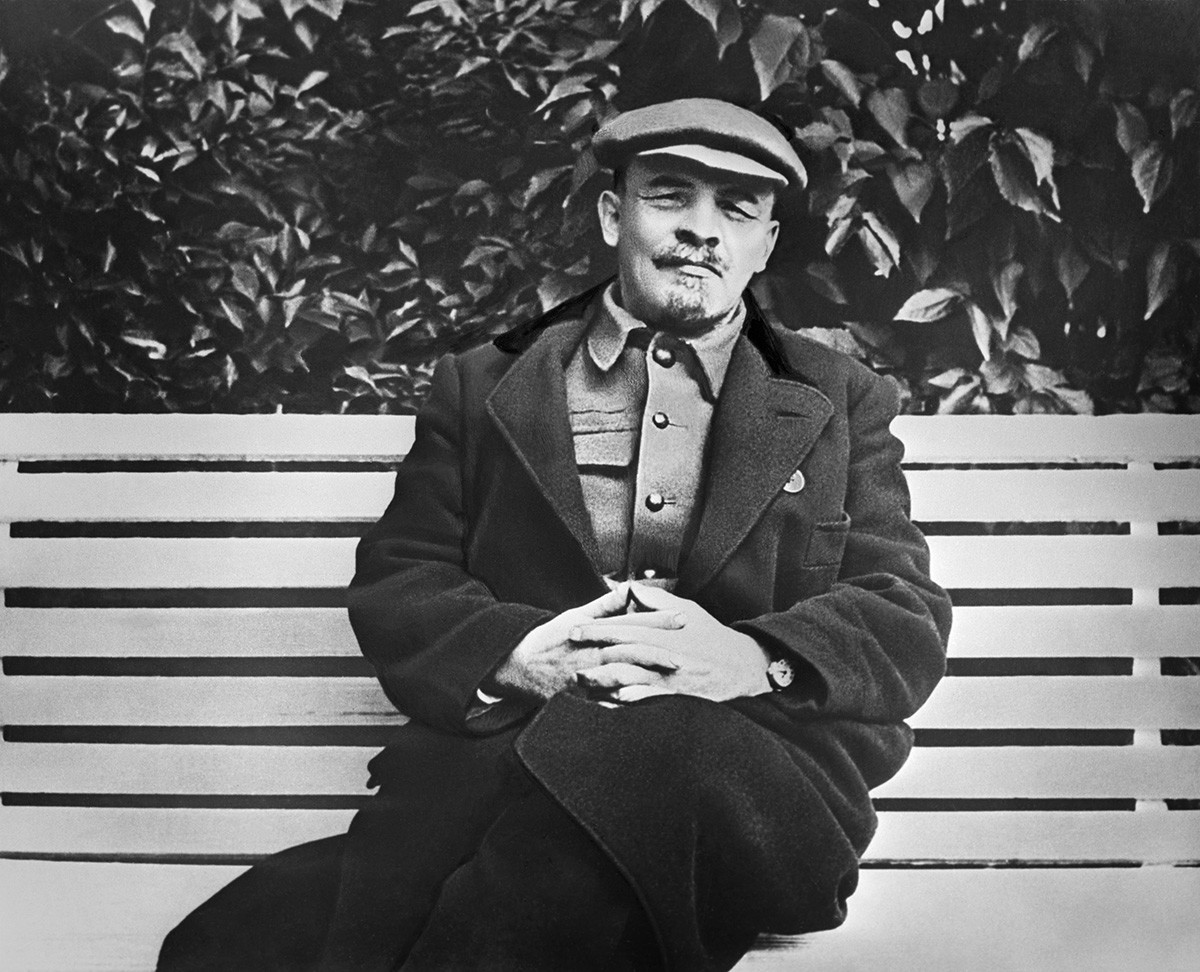 Lenin at Gorki Settlement in 1922.

Following in Lenin’s footsteps, the established political elite of the time also began to wear flat caps. Only Minister of Foreign Affairs Vyacheslav Molotov ignored that trend and continued to wear his favored classic hats.

Joseph Stalin’s inexorable rise to power brought dramatic change to all sections of the society, with Lenin’s cap eventually sinking into oblivion. Stalin’s head was covered by a low-peaked cap that matched with the overall personality of the totalitarian leader. ‘The hero of the Soviet Union’ remained loyal to his fashion acumen for decades and changed his handmade caps like he did socks. 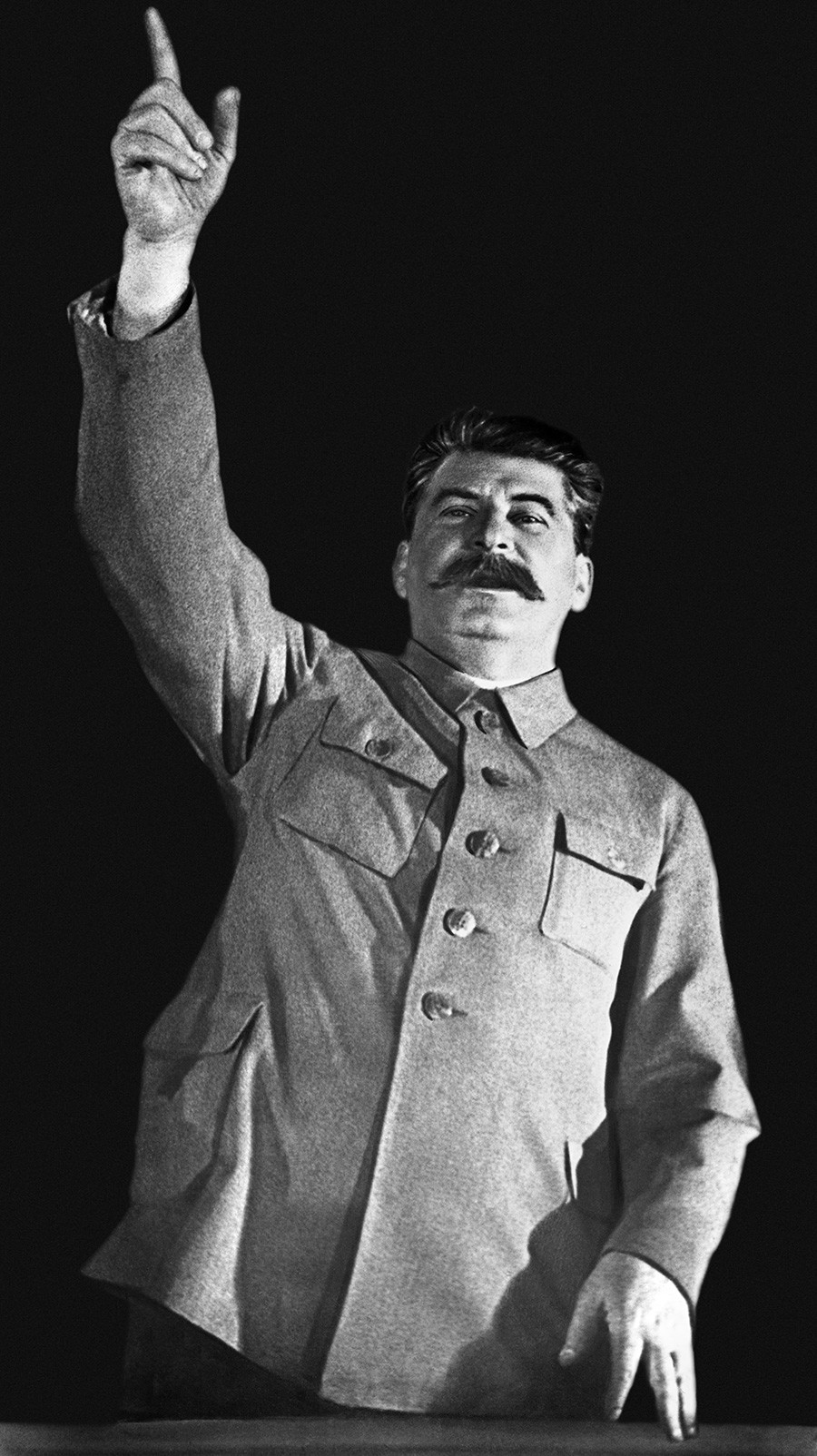 In the 1920s, Stalin was dressed in a quasi-military gray tunic with a stand-up collar and four pockets.

Unlike Lenin, who was a man of refined tastes, Stalin, who came from a poor family, refused to wear double-breasted suit jackets or ties. Accompanying him throughout his life was an unadorned military tunic. In fact, it was Alexander Kerensky (the leader of the Provisional Government in 1917) who was first spotted wearing the tunic. The garment initially came under the spotlight during the First World War, where it was worn by British and French officers.

In the 1920s, Stalin was dressed in a quasi-military gray tunic with a stand-up collar and four pockets. In the 1930s, a turndown collar took centerstage, as Stalin found the standup collar increasingly uncomfortable.

His signature outfit, known as the ‘stalinka’, blended the deceptively serene modesty of the supreme commander with his military ambitions. The man, who was responsible for murdering millions during his long reign, paired it with trousers tucked inside knee-high workman’s boots.

In 1943, when Stalin declared himself Marshal of the Soviet Union, he continued to wear his signature uniform. Exuding strength and confidence, Stalin had god-like status in the USSR and was a role model for everyone, from school-aged boys to government officials. A number of his ardent supporters, from Lazar Kaganovich (who took an active part in Stalin’s purges) to brief future successor Georgy Malenkov, were all wearing tailor-made stalinkas. 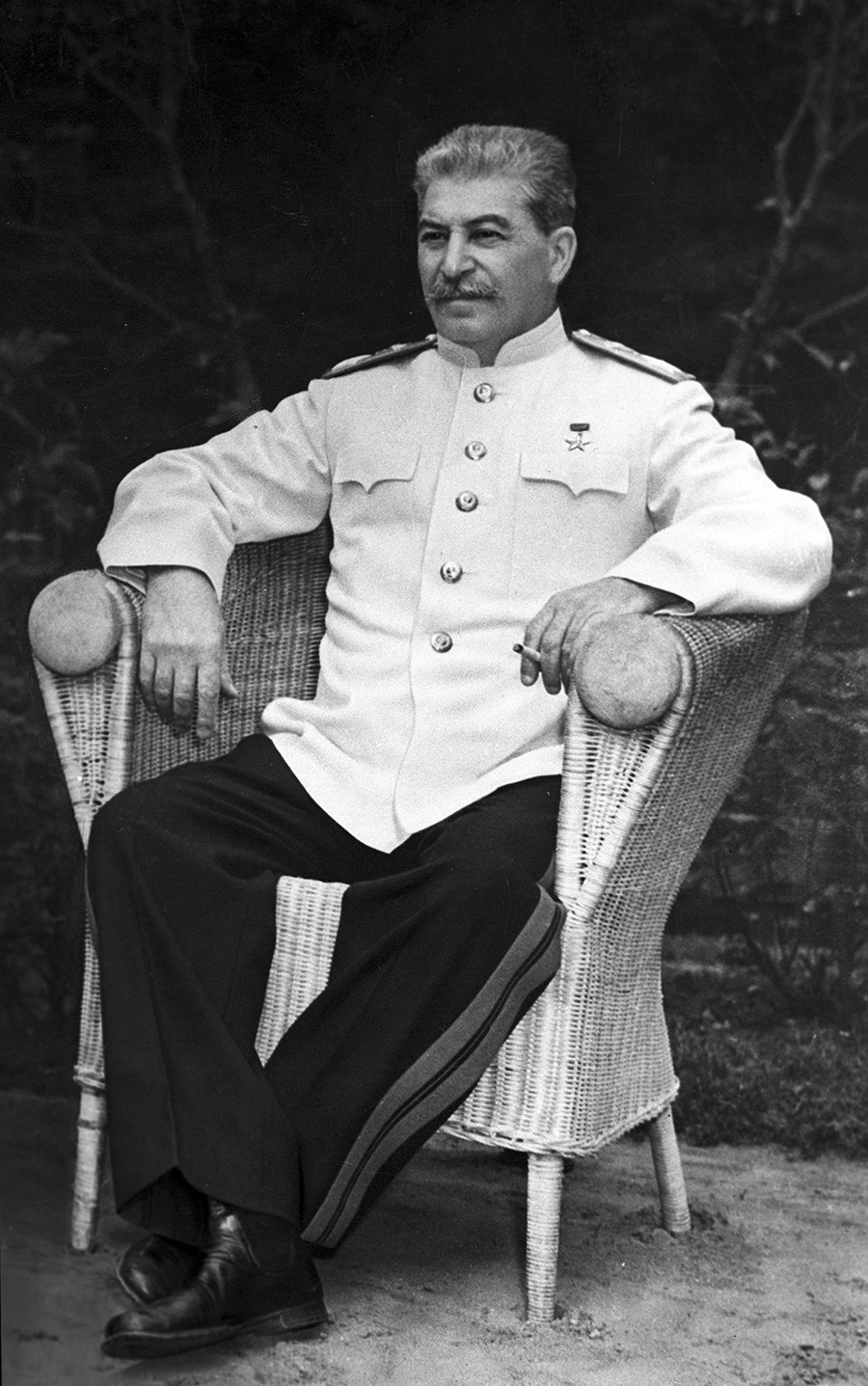 Joseph Stalin during the Potsdam Conference.

Stalin’s favorite outfit was also adopted by several generations of Chinese communists, from Mao Zedong (founder of the People’s Republic of China) and Zhoe Enlai (a key figure in the Communist Party) to Deng Xioping (former Chinese vice premier.) The founder of North Korea Kim II Sung would wear stalinka for decades, switching from tunics to suits only at the end of his life. His son, Kim Jong II would slightly revamp the stalinka by adding a zipper, but Kim II Sung’s grandson would go back to the original, old-school stalinka version.

Nikita Khrushchev dropped a political bombshell when he made a (secret) speech to the 20th Communist Party congress, where he slammed Stalin’s cult of personality. Khrushchev’s de-Stalinization of the Soviet Union also had a huge impact on culture, art and fashion. 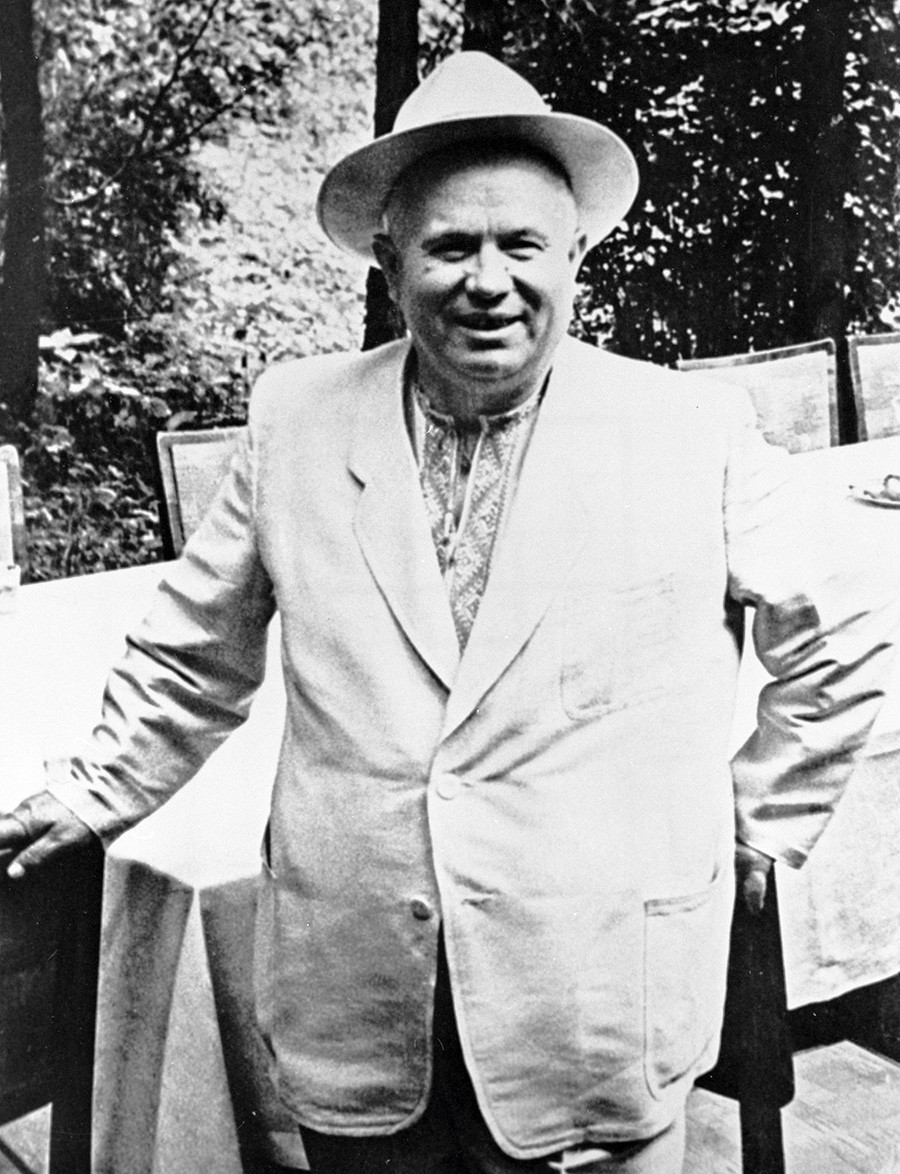 READ MORE: How Khrushchev bashed Stalin and his heritage

It was a battle of taste, really. The so-called “Khrushchev’s Thaw” set in. First off, Stalin’s favorite tunic was dumped in favor of ill-fitting suits. Khrushchev, who was the Soviet leader between 1953 and 1964, opted for broad-shouldered coats and suits of light shades that he wore at any time of the year. The son of a coal-miner never boasted an athletic figure, so his suits, shirts and shoes had to be tailor-made for him. He wanted his jackets to be comfortable and laid-back. 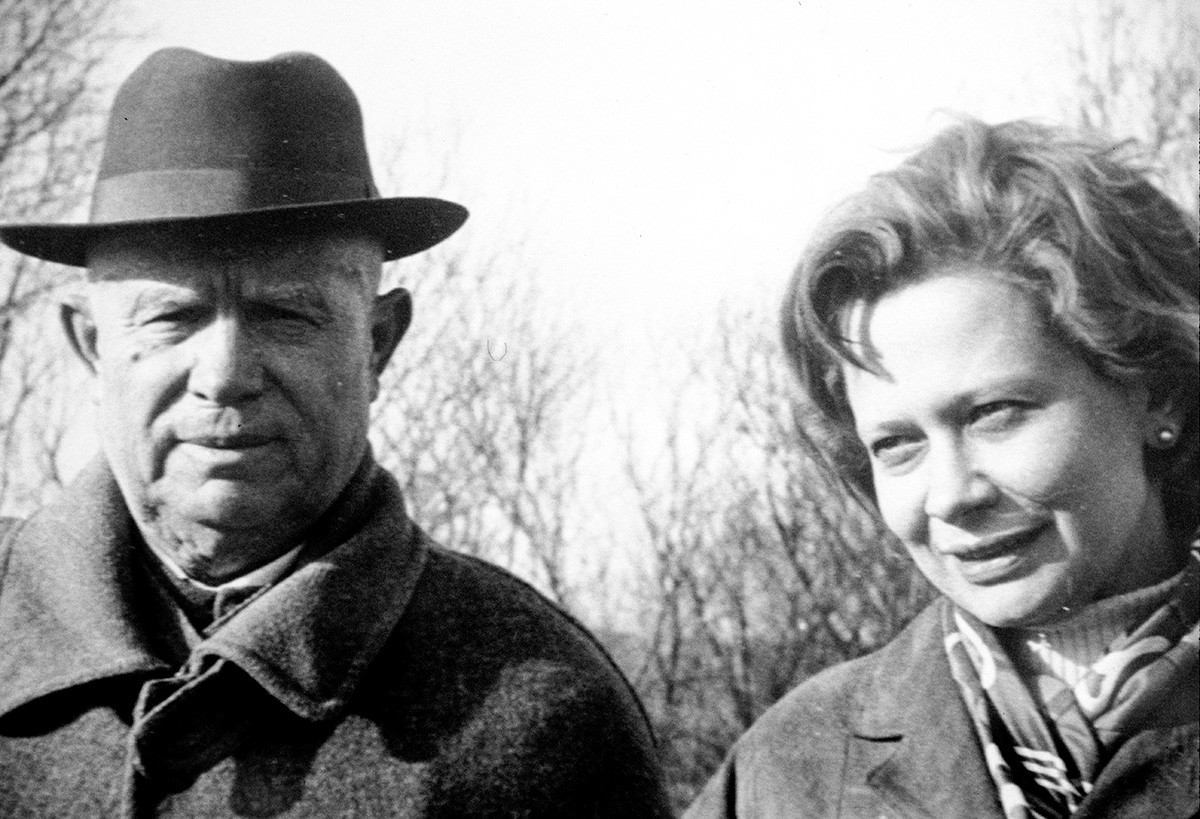 Nikita Khrushchev with his adopted daughter Julia in 1967.

In addition to the pseudo-casual style, Khrushchev promoted folk style that seemed more consistent with his peasant background. He often appeared in public in embroidered traditional Ukrainian shirts.

Khrushchev, who went from being a shepherd to the top of the pack, was also a well-known hat fan. He sparked the USSR’s men’s hats fad. The Soviet leader wore simple felt and straw hats in autumn and summer. Broad-brimmed and gallant, hats blended naturally with his large persona. Khrushchev was a trendsetter for ordinary people and party apparatchik copycats. 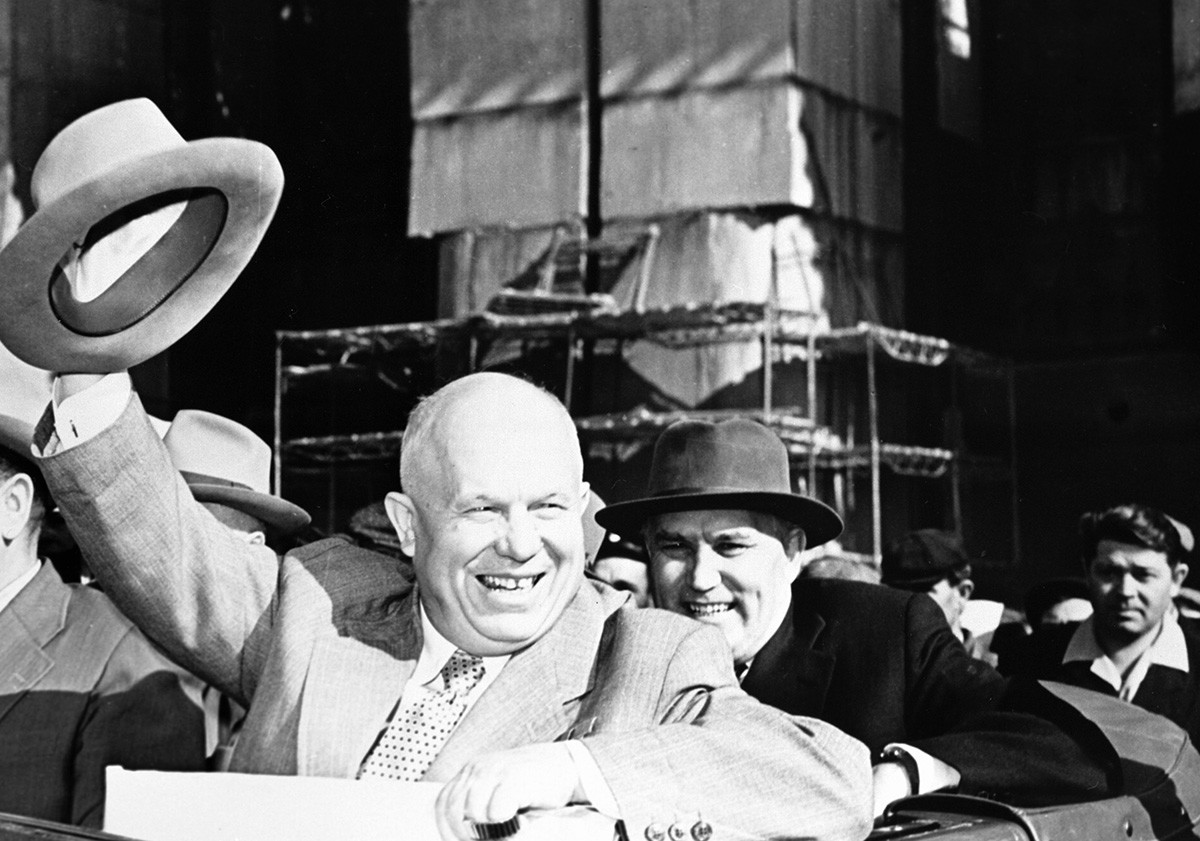 READ MORE: No, Khrushchev never banged his shoe at the UN

Leonid Brezhnev, who led the USSR from 1964 till 1982, liked to keep things simple. He was always dressed rather elegantly in tailored dark suits, designed by Aleksandr Igmand, the head of men’s fashion at the USSR’s main fashion hub of the time, the Moscow House of Models. Igmand was Brezhnev’s personal tailor for nearly a decade. 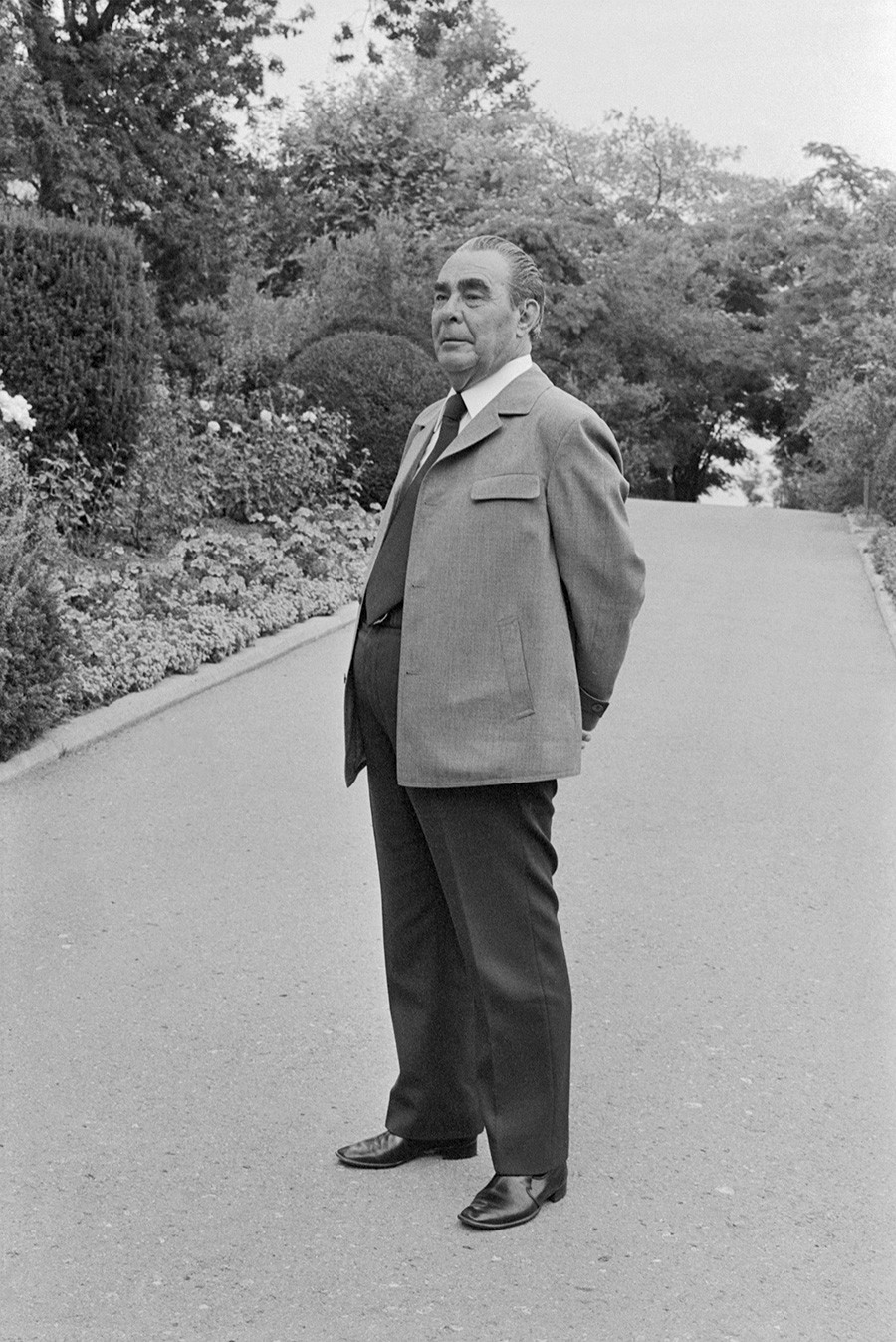 In the early 1970s, two-button suits with a plunging neckline were in vogue. Brezhnev liked both his suits and his politics conservative. One day, however, the Soviet leader ordered a different kind of suit. Igmand was asked to visit Brezhnev in his apartment. “Brezhnev often walked in front of me in his negligee, in foreign-made boxer briefs of excellent quality that were impossible to buy in the Soviet Union,” the designer recalled in a book that came out in 2008. Brezhnev then grabbed a jacket and pants made of heavy fabric like denim jeans from his closet.

American farmers clothes, Igmand thought. Brezhnev said it was a gift from Anatoly Dobrynin, the Soviet Ambassador to the US. “You see,” Brezhnev began, “Dobrynin sent me a suit, but it’s far too small. Can I have exactly the same one made to measure?" The problem was, there were no snap fasteners in the Soviet Union back in those days. And Brezhnev was the biggest fan of the tiny, rounded pieces of metal. 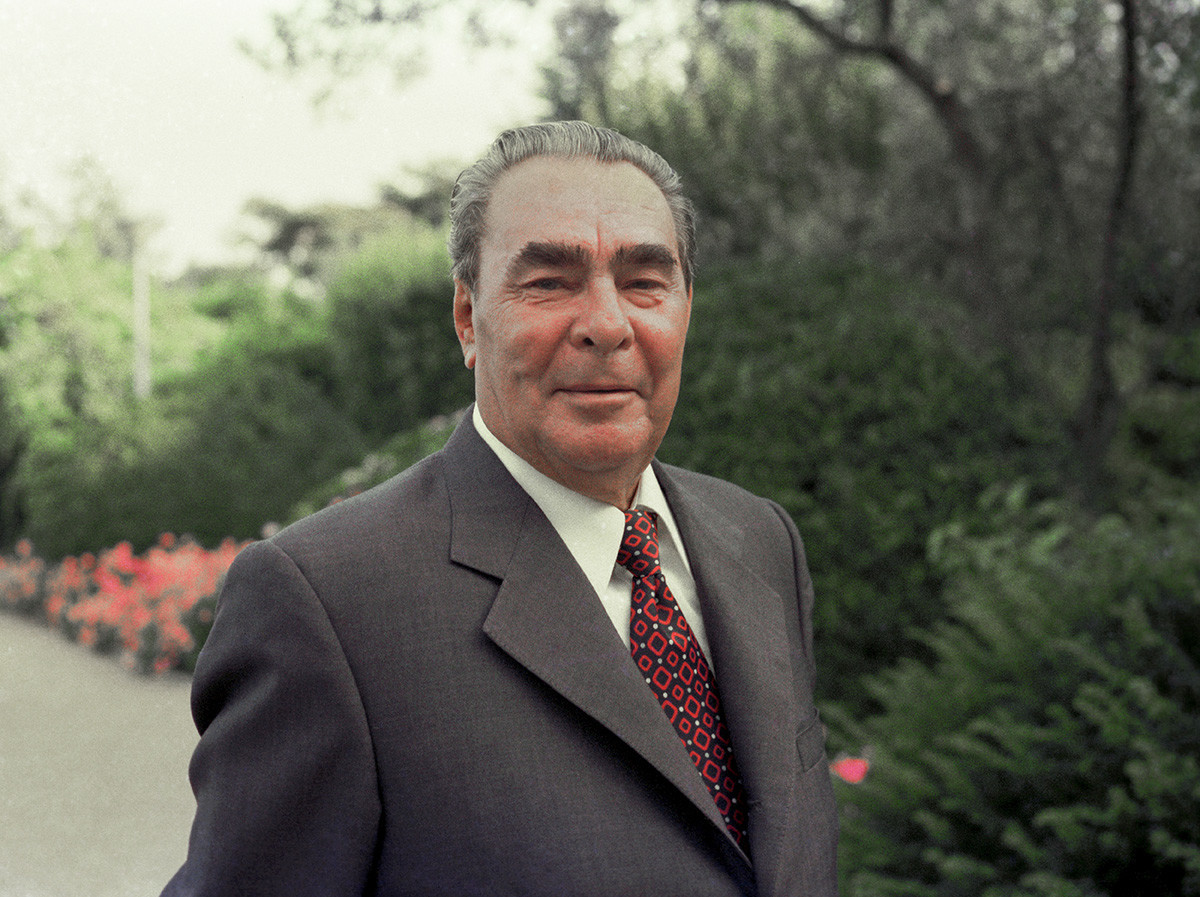 Brezhnev was always dressed rather elegantly in tailored dark suits.

Sometimes, when it was impossible to find something in the USSR, local ministers ordered “rare or deficit goods” from France or the UK. In the long run, snap fasteners were created specially for Brezhnev’s suit in the Soviet Union. Brezhnev was thrilled to bits when he received his tailor-made suit with snap-fasteners, telling Igmand he initially doubted that it would ever be possible to copy the design precisely.

Unlike his fashionista wife Raisa, who revolutionized Soviet women’s wear, Mikhail Gorbachev did not care about fashion at all. In the early 1980s, men in the USSR were relatively well-dressed. Gorbachev, the mastermind of Perestroika and Glasnost policies, favored tailor-made suits produced mainly in the USSR. 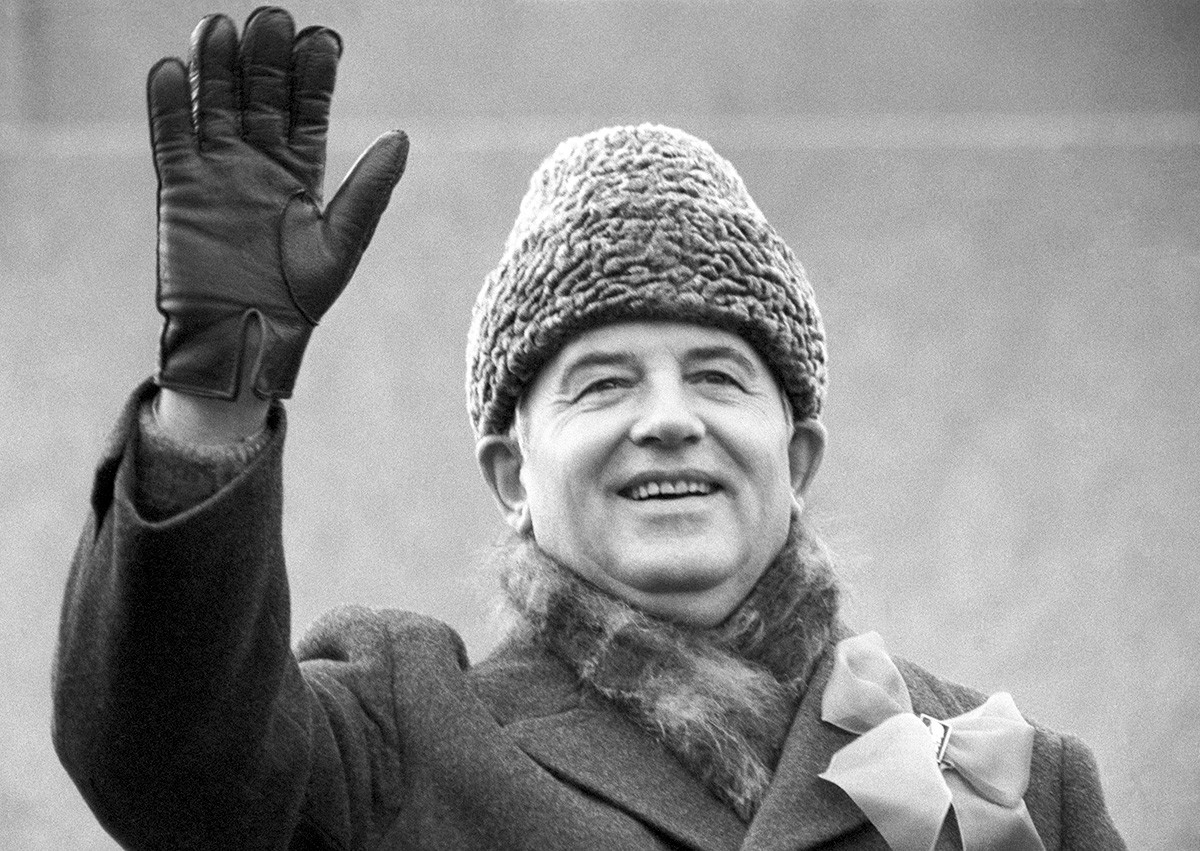 Mikhail Gorbachev did not care about fashion at all.

READ MORE: 6 iconic symbols of perestroika that are no longer with us

The man, whose policies turned Soviet society and economy upside down, was exceptional in his personal modesty. Gorbachev preferred to keep the volume low and cultivated a lack of pretension in those around him. He never wanted to stand out from the crowd. Maybe, for that reason, he refused to wear a tuxedo.

And yet, Gorbachev nailed it in his dark no-frills Soviet-made suit, hat and trench coat. He was surely more charismatic and sophisticated than previous Soviet leaders. In the 1980s, mink fur hats with ear flaps were all the rage in the USSR. 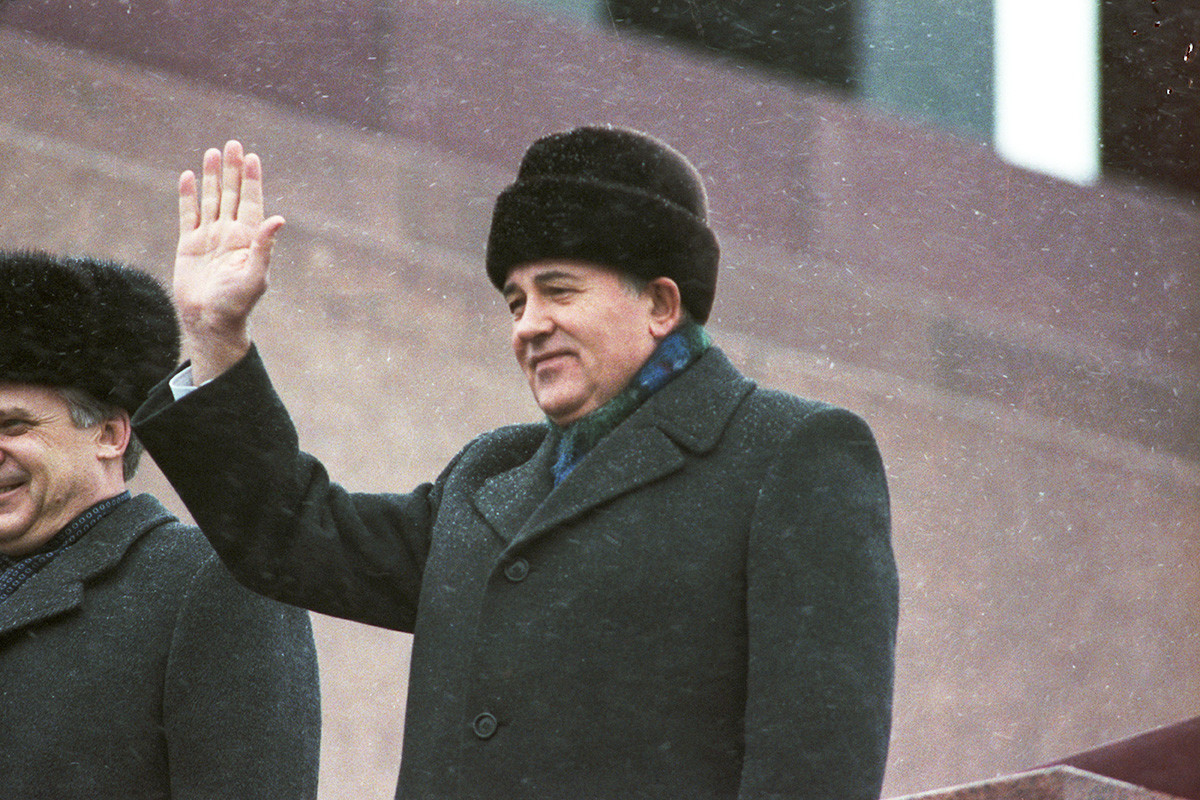 Gorbachev had an affinity for fur hats and was often seen in one in the bitterly cold winters.

Gorbachev, however, cut a distinguished figure wearing the so-called Russian Cossack seal fur hat. He had an affinity for fur hats and was often seen in one in the bitterly cold and snowy winters. The trend took off, and countless members of the Soviet politburo began to wear similar hats, too.