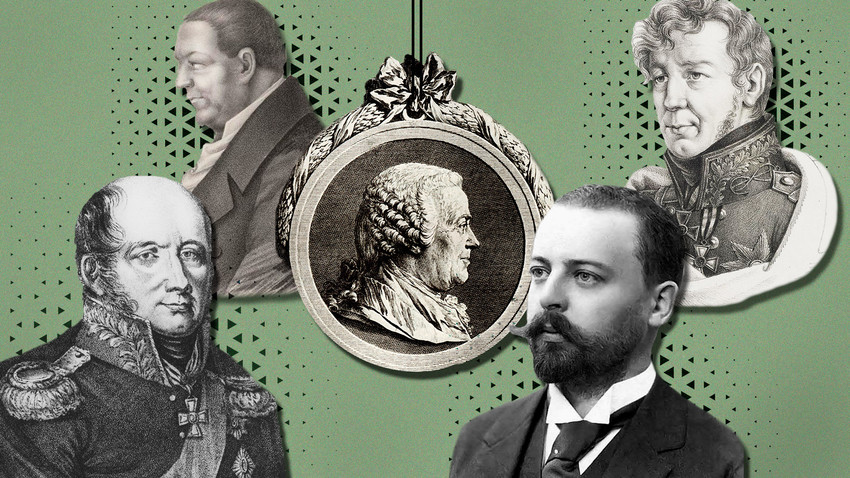 Getty Images; Public Domain
For more than 150 years, the Russian Empire was governed by ethnic Germans – including the Romanovs, starting from Peter III. Aside from them, there were a great lot of German people who contributed immensely to the culture and science of Russia. 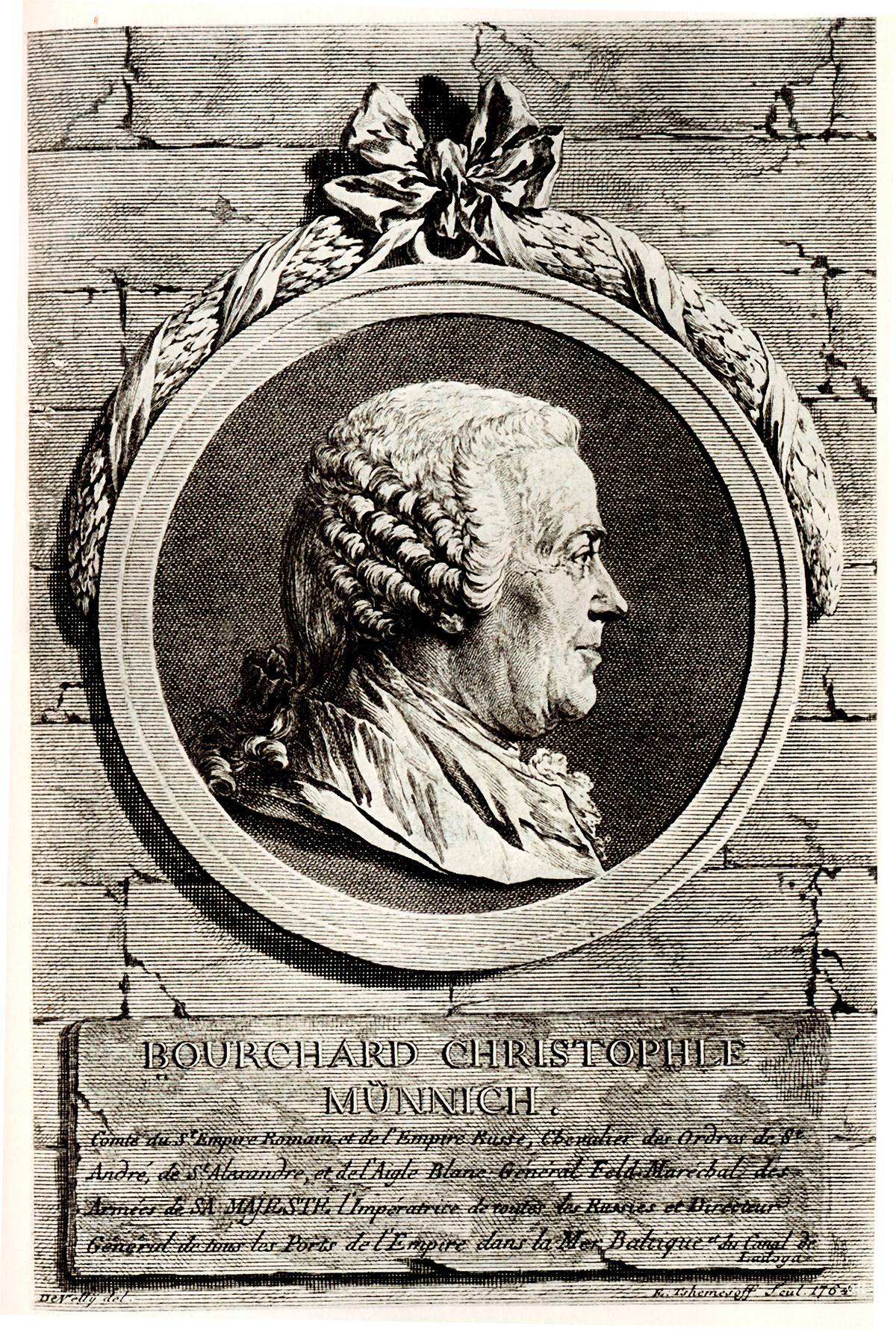 Born: In the Grand Duchy of Oldenburg, into a military noble family.

Started service/work in Russia: In 1721, Von Münnich was invited to Russia to serve as an engineer and general. Upon his arrival, Von Münnich managed to impress Peter the Great with his skills as a fortificational engineer and continued his service after Peter’s death.

Main accomplishments in the Russian service: Burkhard von Münnich is credited with a crucial reorganization of the Russian army in 1732-1741, when he was the president of Russian War Collegiate. He reorganized the army ranks and formations, established the First Cadet Corps for young noblemen and evened the salary of the Russian officers with that of the invited foreign military specialists. Munnich was also the first war commander in Russian history to defeat the Turkish army in a land battle during the Battle of Stavuchany on August 17, 1739. 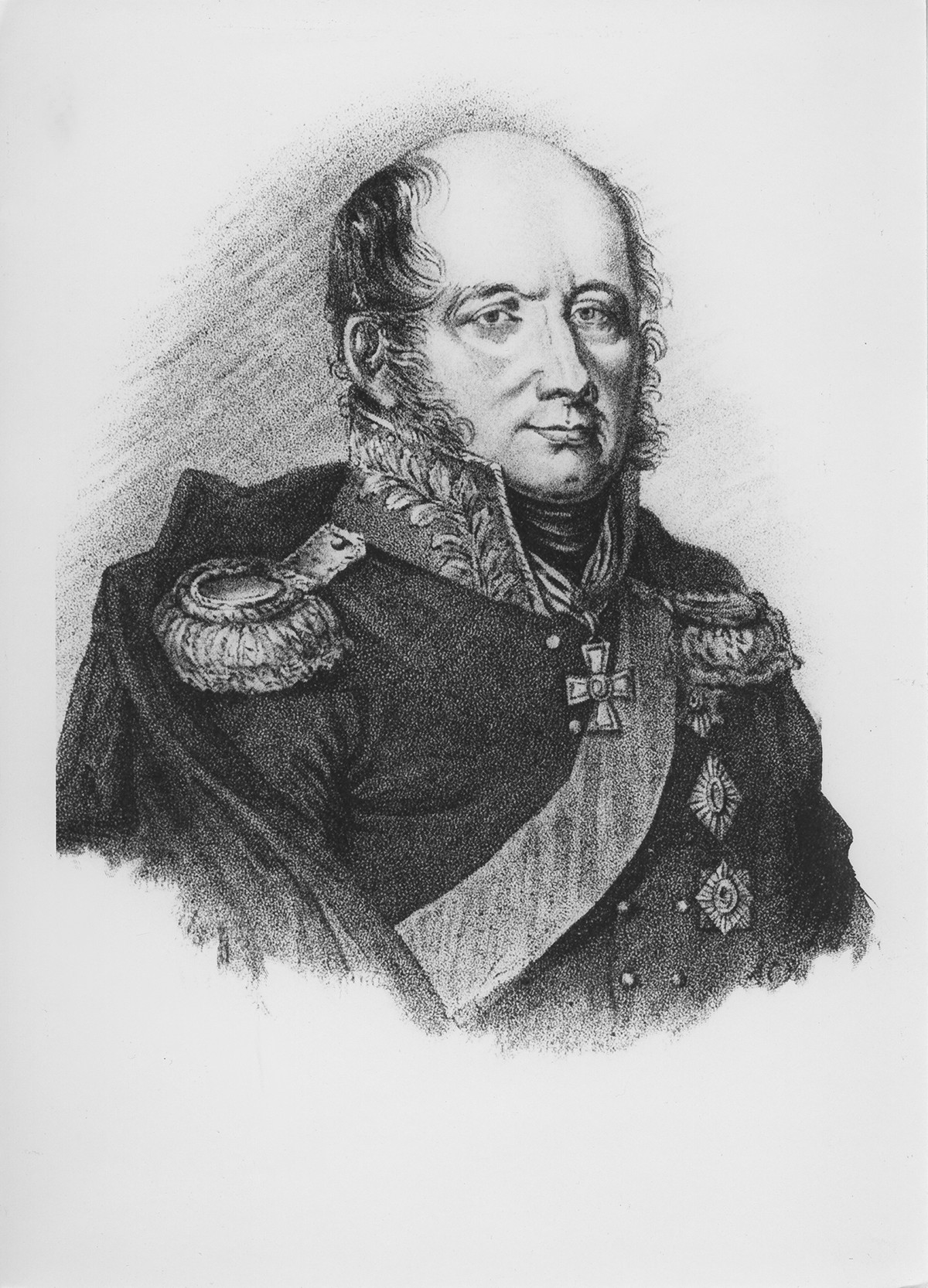 Born: In Riga, into a Baltic German-speaking noble family that belonged to the Scottish clan Barclay.

Main accomplishments in the Russian service: Barclay was distinguished as a war commander, but his greatest contribution was the plan that later helped defeat Napoleon. During the War of the Fourth Coalition against Napoleon (1806-1807) Barclay was wounded and while recuperating, devised a plan in case Napoleon invaded Russia. The plan had it to “lure the enemy into the country” and crush it, then chase the enemy back to Europe.

In 1812, Michael Barclay was the Minister of War of the Russian Empire and at the same time Acting Commander-in-Chief of the Imperial Army. He implemented his tactics, drawing the Great Army deeper into Russia, and became very unpopular among the officers and soldiers, who thought that Barclay was just cowardly evading the big battle and bringing the enemy closer to Moscow. In August 1812, Mikhail Kutuzov took the chief command of the Imperial Army – and actually continued what Barclay started, eventually emaciating Napoleon’s army to the point of utter defeat. Barclay continued to serve as a war commander until his death in 1818. His role in the defeat of Napoleon was later recognized by Emperor Alexander I – but only in private letters. 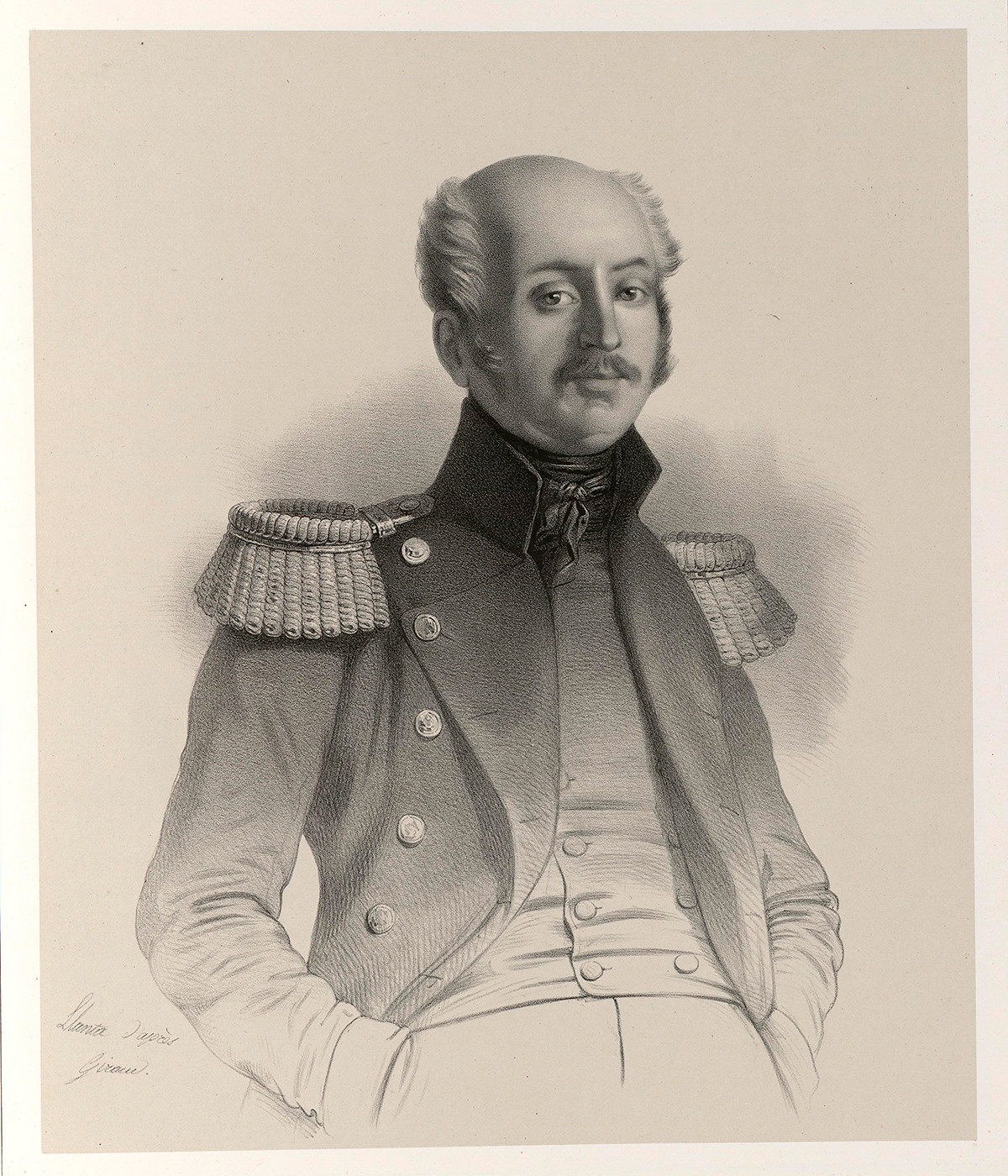 Born: In Pskov into the noble Baltic German Wrangel family. Young Ferdinand was a distant nephew to Friedrich Graf von Wrangel (1784-1877), a Generalfeldmarschall of the Prussian Army.

Started service/work in Russia: Born in Russia, von Wrangel entered the Naval Cadet Corps in 1807 and, after graduating in 1815, served in the fleet.

Main accomplishments in the Russian service: Wrangel became one of the most famous Russian explorers. He took part in three circumnavigations, went for research expeditions along the northern shores of Siberia and along the western coast of the Northern American continent. He was also the governor of Russian America in 1829-1835 and headed the Russian-American Company in 1840-1847. He also was one of the founding fathers of the Russian Geographical Society. His highest civil position was Naval Minister (1855-1857). 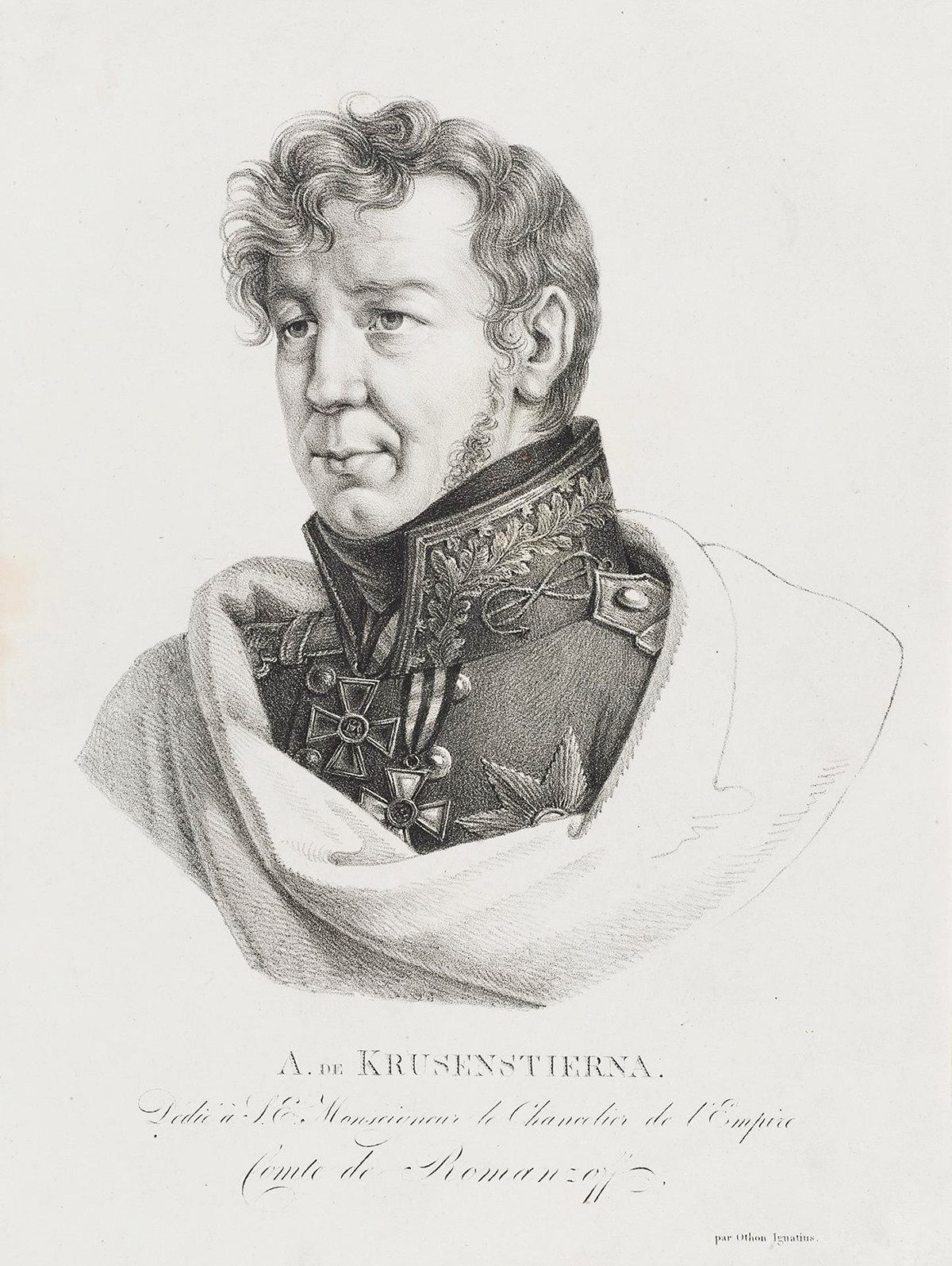 Born: In Hagudi, Harrien, Governorate of Estonia, Russian Empire, into a Baltic German family that descended from the Swedish aristocratic family von Krusenstjerna.

Started service/work in Russia: In 1788, Krusenstern graduated from the Naval Cadet Corps ahead of schedule because of the Russo-Swedish war and soon was thrown into battle. Before he was 20, he had already taken part in major naval clashes with the Swedes. 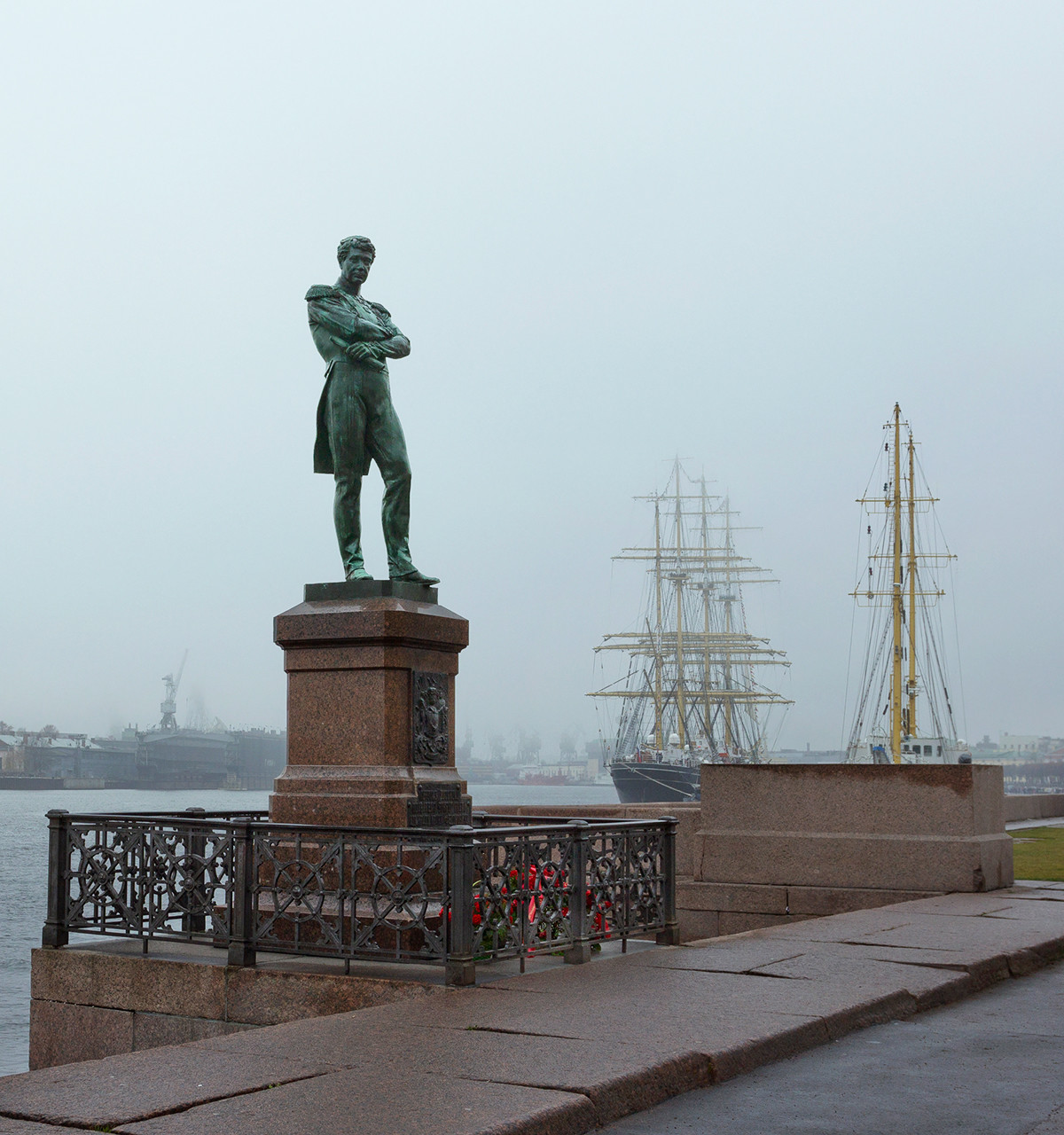 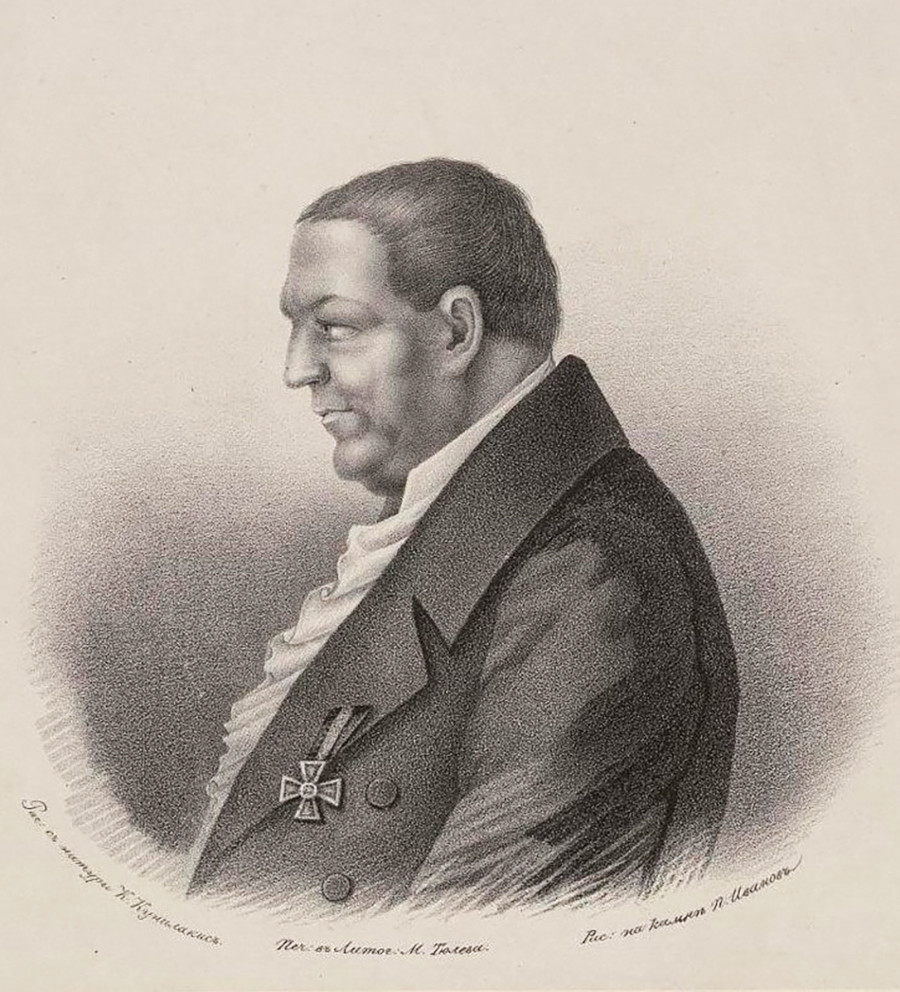 Born: In Bad Münstereifel, Euskirchen, Germany, into a family of medics.

Started service/work in Russia:Friedrich Haass started his practice as an ophthalmologist in Vienna and was recognized by a Russian Prince Nikolay Repnin, who invited him to Moscow in 1806 to become his family physician. But soon, Haass’ skills and knowledge made him one of the most prominent doctors in Russia.

Main accomplishments in the Russian service: After 1825, Haass (who by then had learned Russian and had changed his name to Fyodor) became Moscow’s chief physician. In 1826, he opened Russia’s first ophthalmological hospital in Moscow. However, he was most famous for his charity work and helping convicts. It was Haass who made the government abandon shaving half of prisoners’ heads or chaining up to 10 people to a giant heavy bar. He also insisted that the shackles worn by the prisoners while they traveled to Siberia must be three times lighter and provided them with leather lining for comfort. He is considered one of the people who contributed the most to humanizing the Russian penal system. 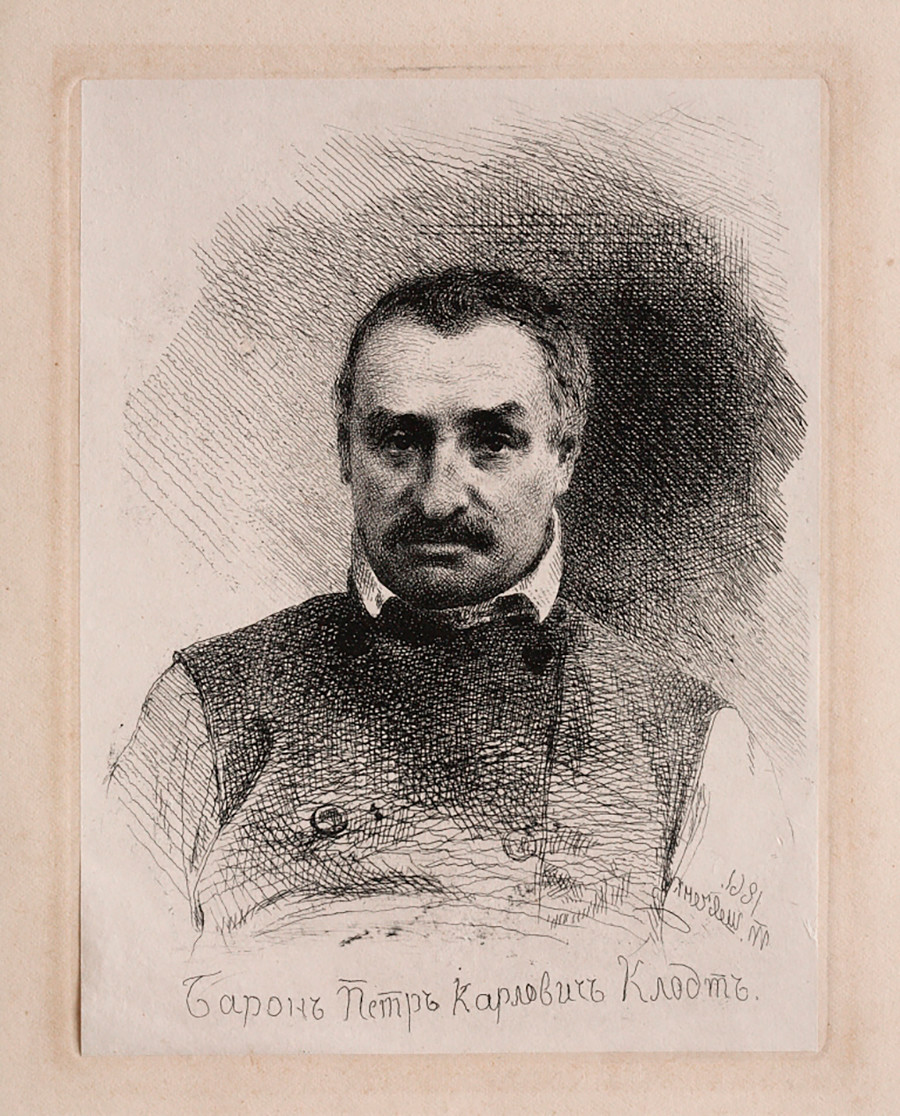 Born: In St. Petersburg into a Baltic German noble family, the Clodt von Jürgensburgs. However, Peter Clodt spent his childhood in a faraway Siberian town of Omsk, where his father was commanding a military corps.

Started service/work in Russia: As well as his ancestors, Peter was preparing for military service and entered an artillery school at the age of 17. However, Peter spent all his free time drawing horses, sculpting or carving horses from wood. 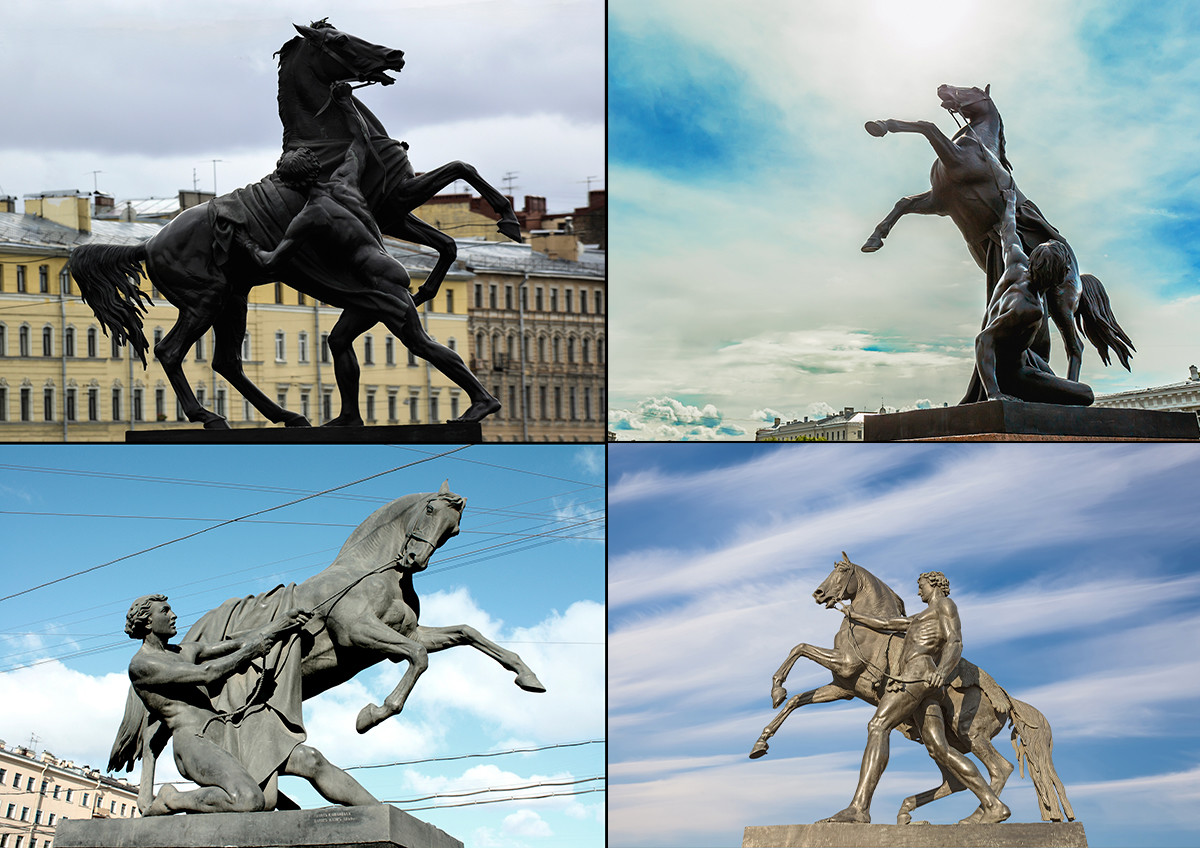 "The Horse Tamers" by Peter Clodt at the Anichkov bridge, St. Petersburg

Main accomplishments in the Russian service: Peter Clodt’s fame spread quickly. While he was still studying, some of the wooden horses he had carved got into the hands of Grand Dukes Mikhail and Nikolay, the sons of Emperor Nicholas I. The carvings were so immensely life-like, that Peter Clodt had a great lot of orders from noble families in the beginning of the 1830s – and he became famous even before receiving any formal art education! Clodt’s most famous masterpieces are a sculpture of a triumphal car drawn by six horses (1833) standing on the Narva Triumphal Arch – and The Horse Tamers, the four sculpture groups on Anichkov Bridge on Nevsky Prospect, one of St. Petersburg’s main tourist attractions. Clodt personally performed the casting of these bronze sculptures. 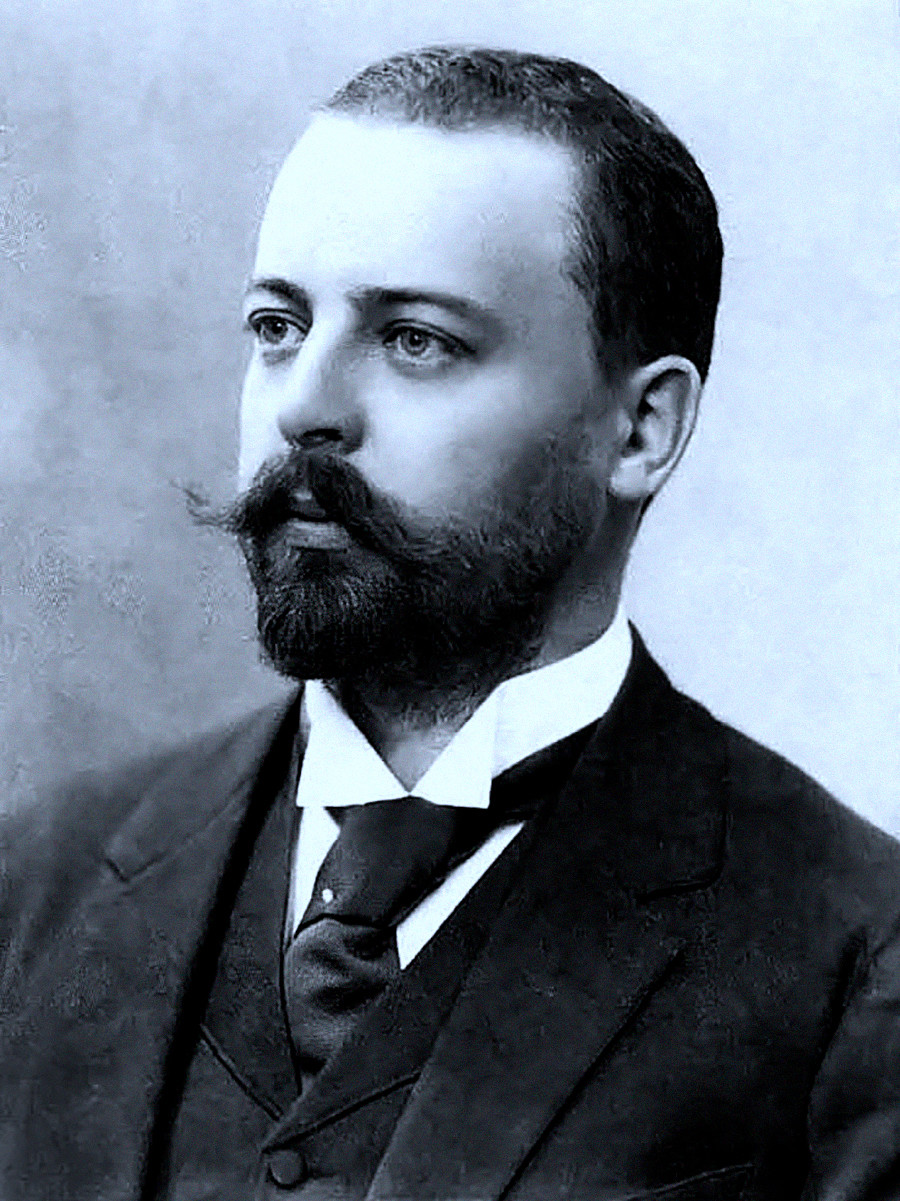 Born: In Saint Petersburg, into a family of ethnic German engineers, the Volga Germans of Saratov.

Started service/work in Russia: At 16, after studying in a gymnasium and a training school in Saratov, Schechtel came to Moscow and started an apprenticeship under the supervision of Alexander Kanisky (1829-1897), one of Moscow’s foremost architects. In 1875, he entered Moscow School of Painting, Sculpture and Architecture, but was expelled 2 years later, because of his failure to attend classes. He never finished formal education, but it didn’t hinder him from becoming one of the main architects of early 20th century Moscow. 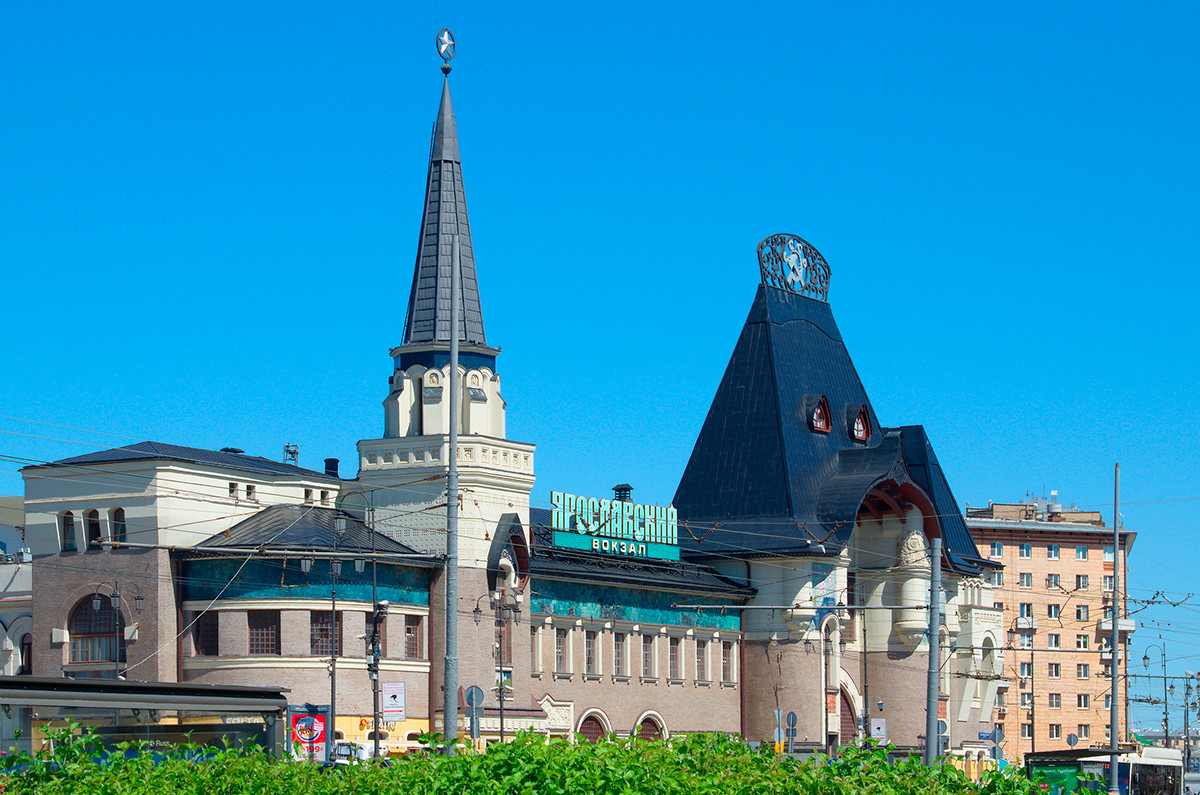 The Yaroslavsky Railway station in Moscow, redesigned in 1902-1904 after a project by Fyodor Schechtel

Main accomplishments in the Russian service: Schechtel obtained a construction management license in 1894, having already completed one of his most known projects – Zinaida Morozova House on Spiridonovka Street. Since then, he supervised and designed numerous private mansions and dachas, hotels, chapels, and theaters in the styles of Art Nouveau and Russian Revival. You can read more about Fyodor Schechtel’s 5 most known masterpieces here.