History of abortions – from Imperial Russia to the USSR 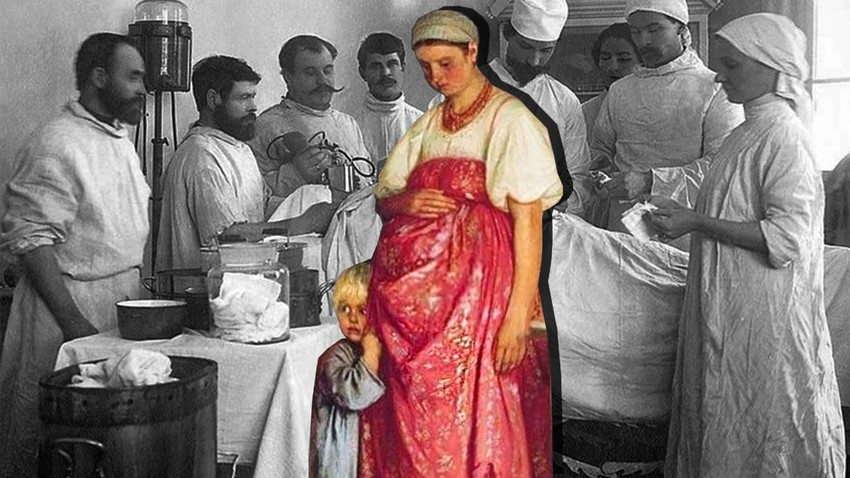 Russia beyond (Photo: Firs Zhuravlev; russiainphoto.ru)
Abortions were banned and legitimized several times through Russian history – and Russia was the first country in the world to fully legalize them in 1920.

“It was 1937, and mom became pregnant [with me],” movie director Alexey German once revealed an interview. “Everybody got jailed [because of Stalin’s Great Purge]. Well, a newborn kid was just what my parents needed. Mother tried to get rid of me – abortions were banned… She jumped from a tall wardrobe, lifted weights, carried buckets full of water, falled on her belly… But then dad called her and said: “You know, if we get rid of the baby, we just won’t make it further. Let’s keep it.”

That’s how people tried to get around when abortions were banned in the USSR. But in the USSR at least, one could talk about it. While in Tsarist Russia, the very topic of abortions was so taboo that it didn’t get a single mention in Russian classic literature. As well as means of birth control – because, apart from interrupted coitus, there were none. All because of the traditional social norms, maintained and employed by the Russian Orthodox church. 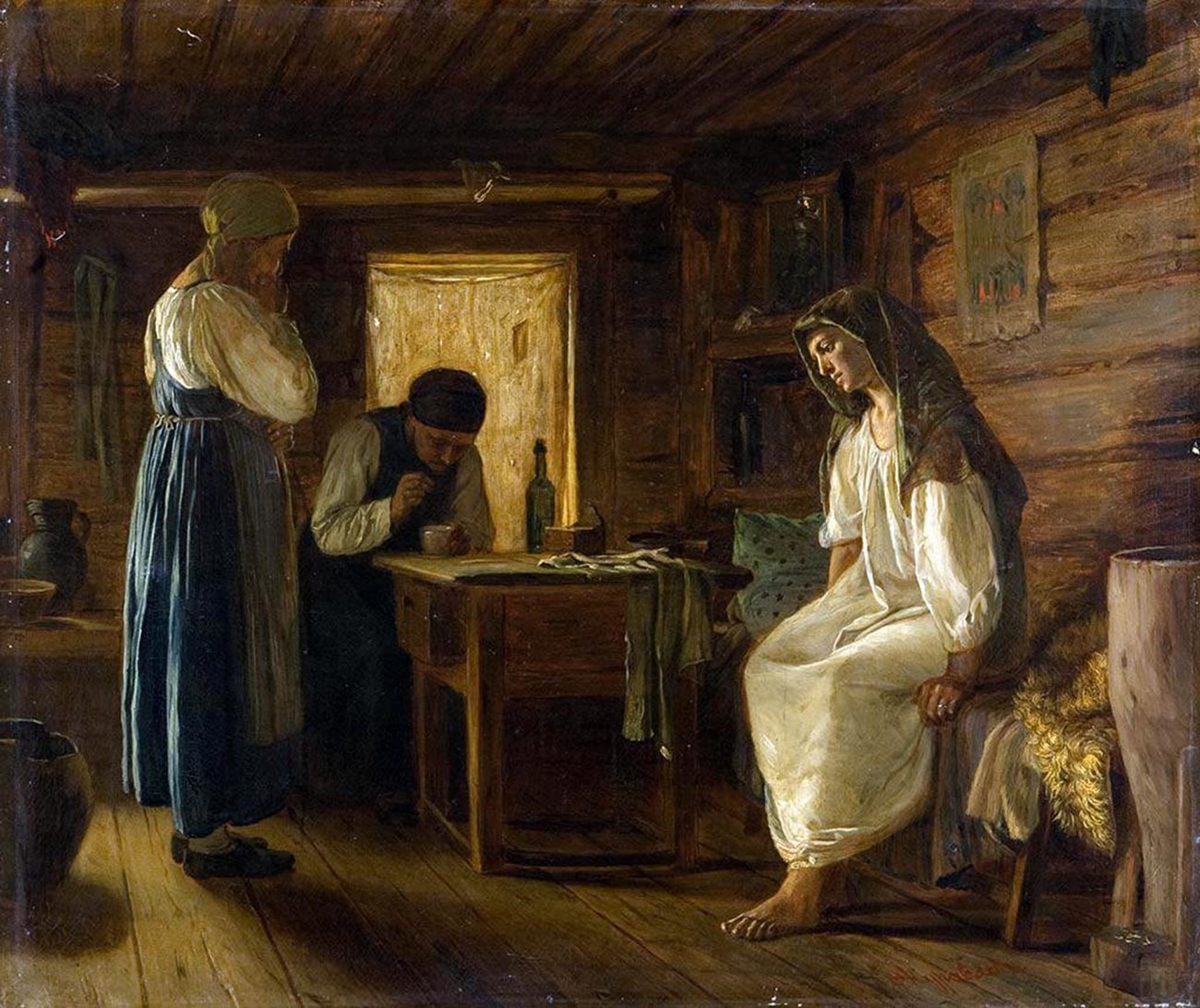 'The Wise Woman', by Firs Zhuravlev. Village sorceresses were the ones who could help getting rid of a pregnancy.

Abortions were practiced widely and uncontrolled in absence of professional medical help, but with assistance of midviwes and witch doctors who were practicing in just about every Russian village since ancient times. Miscarriages were usually brought on by drinking herbal mixtures and taking a hot bath.

State laws in Russia didn’t mention abortions until as late as the 17th century. In 1649, Sobornoe Ulozhenie (‘Council Code’), Russia’s legal code, equalled abortion to infanticide – and punished it with death. Penalty was applied to both the woman who had an abortion and anyone who assisted her. However, this norm was rarely, if ever, actually applied.

Abortion in the Russian Empire 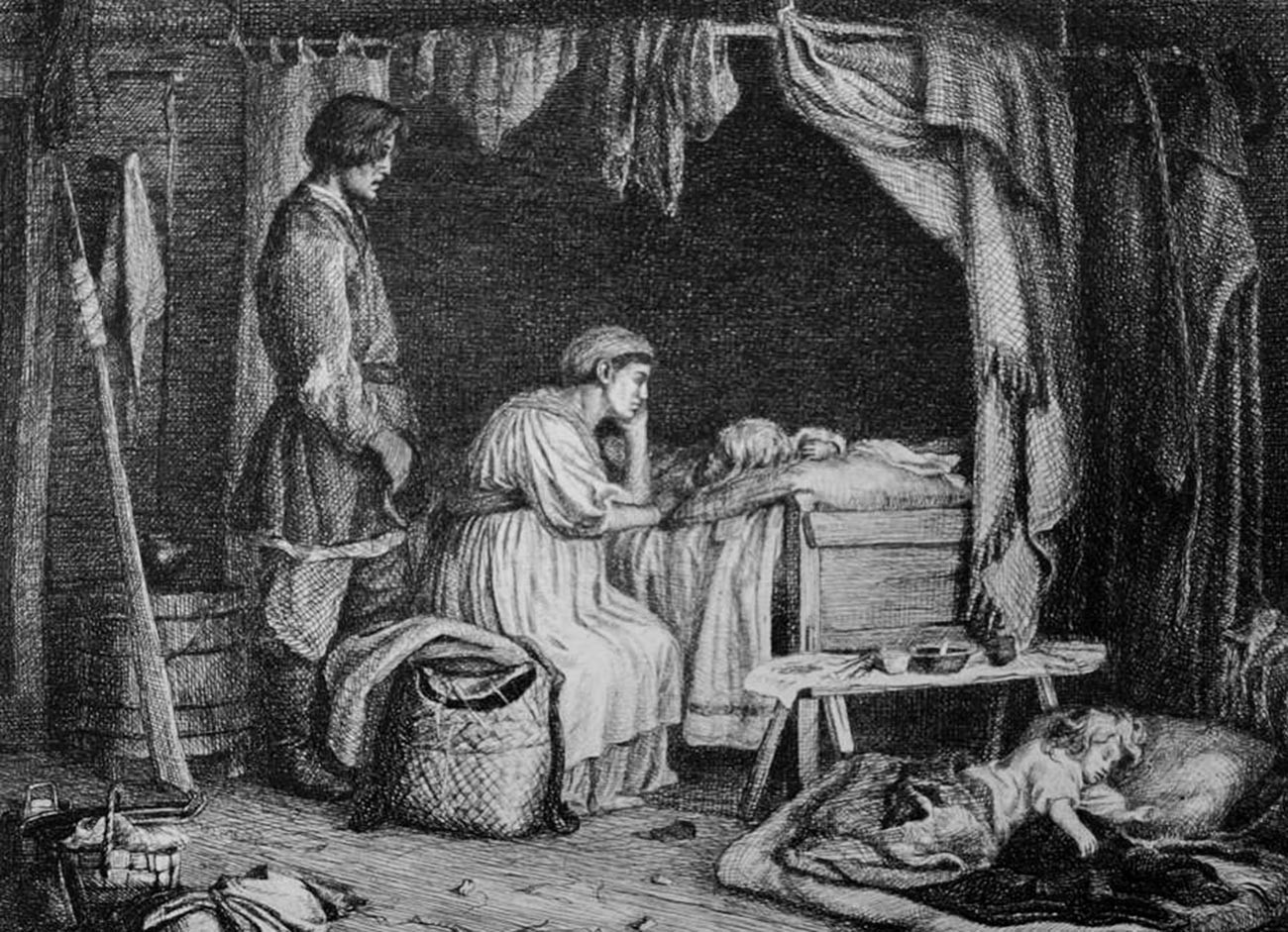 Most peasant families in Russia were excruciatingly poor. Many children were born, but many died in infancy.

In 1715 Peter the Great in his Military Statute ordered the death penalty (performed on a breaking wheel) for infanticide – however, he didn’t specify anything about abortions, so formally, abortions and forced miscarriages were in the “grey zone” for Russian law for a long time, until the 19th century.

According to the Digest Of Criminal Laws of 1832, assisting abortion was punished with scourging and time in labor camp for midwives – but not for the women who had abortions. This norm was active just for a short time. In 1845, midwives who performed abortions without a woman’s consent or knowledge could be punished with four to six years of hard labor (and up to 10 years if the woman was harmed or died in process). Abortion with a woman’s consent was punished with exile to Siberia (same for women who performed abortions on themselves). Importantly, if a person who performed an abortion had a medical education, the punishment was more severe. Murdering a newborn was fully equalled to homicide and punished with a lifetime of hard labor.

The Criminal Code of 1903 somewhat lifted the penalty from the women who were “guilty of murdering a child conceived out of wedlock, during his birth” – they were punished with doing time in a penitentiary institution (workhouse). However, murdering a child born in marriage could lead to 10 years of hard labor.

Abortions as such were punished differently. Women who performed self-abortions were subject to detention in a workhouse for up to three years; the same for anybody who assisted the abortion. Midwives who performed abortions regularly were to be publicized, and finally, performing an abortion without woman’s consent led to eight years of hard labor. However heavy the penalties, there actually were very few sentences for abortions – for example, from 1910 to 1914 there were just 139 trials concerning abortions in Russia, which means the matter still stayed in the grey zone.

‘We need more and more fighters’: Abortions in Soviet Russia and the USSR 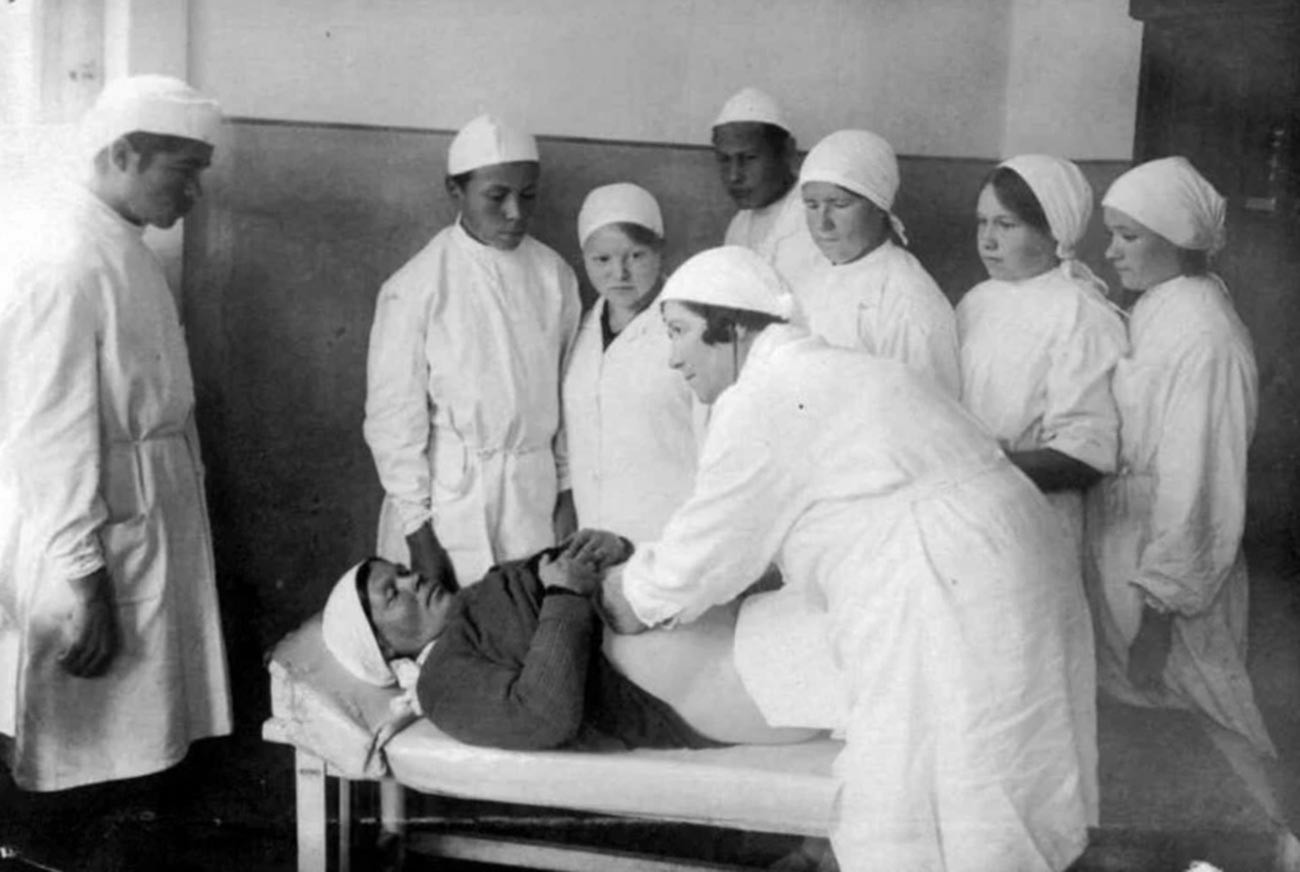 At an abortion clinic in the USSR.

In 1920, Soviet Russia became the first country in the world to fully legalize ending pregnancy with medical intervention. Any woman could do this of her own free will, free of charge, in a special medical institution. This measure was logical for a state and society experiencing sexual revolution. In 1922, the new Criminal Code of Russian Republic criminalized casual abortions – performed by people without medical education, or in unsanitary conditions. People who did this faced up to a year in labor institutions or up to five years, if the woman was harmed or died.

The authorities made woman’s health a priority – abortions were banned for women who were pregnant for the first time and for those who had had an abortion within six months before. Doctors also tried to make the operation as unpleasant as possible. Historian Natalia Lebina writes that in Soviet healthcare, “abortions without anesthesia were a norm. Many doctors reckoned that suffering caused to a woman during the operation was a necessary ‘payment’ for parting with the fetus.”

Which didn’t stop women from getting abortions. Beginning from 1930, a fee was introduced for performing abortions, and it rose quickly: 18-20 rubles in 1930, 60 rubles in 1933, and up to 300 rubles after 1935. Meanwhile, 100-120 rubles was an average working woman’s salary at the time, so abortions were expensive and still performed widely – in 1935 in Leningrad, for example, the state ‘earned’ 3.6 million rubles on abortions. 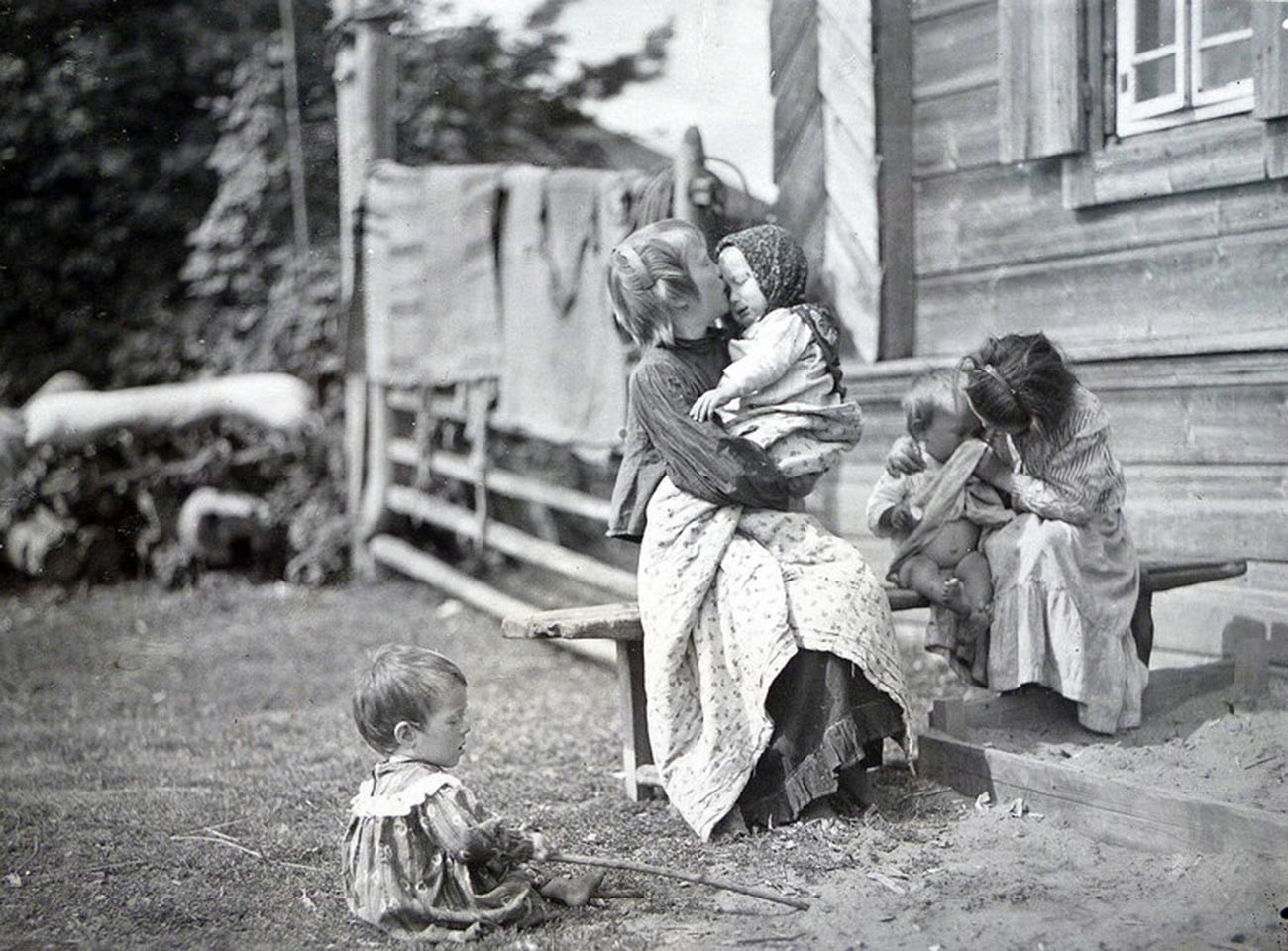 In 1936 abortions were banned – except for those necessary for medical reasons. Why? Aaron Soltz (1872-1945), deputy Prosecutor General of the USSR, one of the ‘old Bolsheviks,’ expressed the official position in an article in “Trud” (‘Labor’) newspaper: “We do not have enough people. We have so much to do! …We need more and more fighters, builders of this life. We need people. Abortion, the destruction of nascent life, is unacceptable in our state that constructs socialism. Abortion is an evil legacy of the order when a person lived by his narrow personal interests, not the life of the community...”

Right after the ban, the amount of abortions dropped sharply – but starting from 1937, it grew again – we mean the ‘permitted’ abortions for medical reasons. 568,000 in 1937, 723,000 in 1939. In 1940 a total of 807,000 abortions were registered in the USSR – and sociologists estimate that there were 10 times as many illegal abortions! After the ban, the amount of women who died of blood poisoning increased fourfold – the grim consequences of illegal abortions performed in unsanitary conditions. A sharp increase was noticed in infanticide – 25% of all murders! Newborns were killed with darning needles, drowned or thrown out in the thrash.

The ban on abortions was, in fact, part of the Great Terror – but unlike the Terror, it continued after WWII and into the 1950s. In the beginning of the 1950s, death because of the consequences of illegal abortions was 70% of all maternal deaths. The dire situation with abortions brought to life sad jokes like this. “It’s getting cold, let’s go to my place and have a cup of tea!” - “Cut it out with tea, please, have you heard abortions are banned?”

The ban on abortions was lifted in 1955, partly thanks to Maria Kovrigina (1910-1995), who became the Minister of Healthcare of the USSR in 1954. In November 1955, abortions were legalized again – but only in hospitals. Abortions performed outside of medical institutions were still a criminal offense. From 1962, abortions became free of charge again, and that was the time when maternal death rates dropped and abortion rates peaked – in mid-1960s, there were about 5.6 million of abortions performed annually in the Russian Soviet Republic alone.

Abortion rates can be considered an indicator of the nation’s hopes for the future. In comparison with the 1960s rates, in the 1970s and 1980s about 4.5 million abortions a year were performed in the Russia Soviet Rebpulic; by 1990, this figure had dropped to 3.9 million.

In today’s Russian Federation, abortions have always been legal. Abortion is covered by health insurance at the expense of the state budget, and every woman has the right to resolve the issue of motherhood. In 1999, there were about 2 million abortions peformed a year, and in 2017, this figure was 627,000.