Why Old Russia chose Eastern Christianity as its religion

History
Alexandra Guzeva
Legend has it that after renouncing paganism, Russians decided to choose a religion from four options. Which criteria were they guided by? 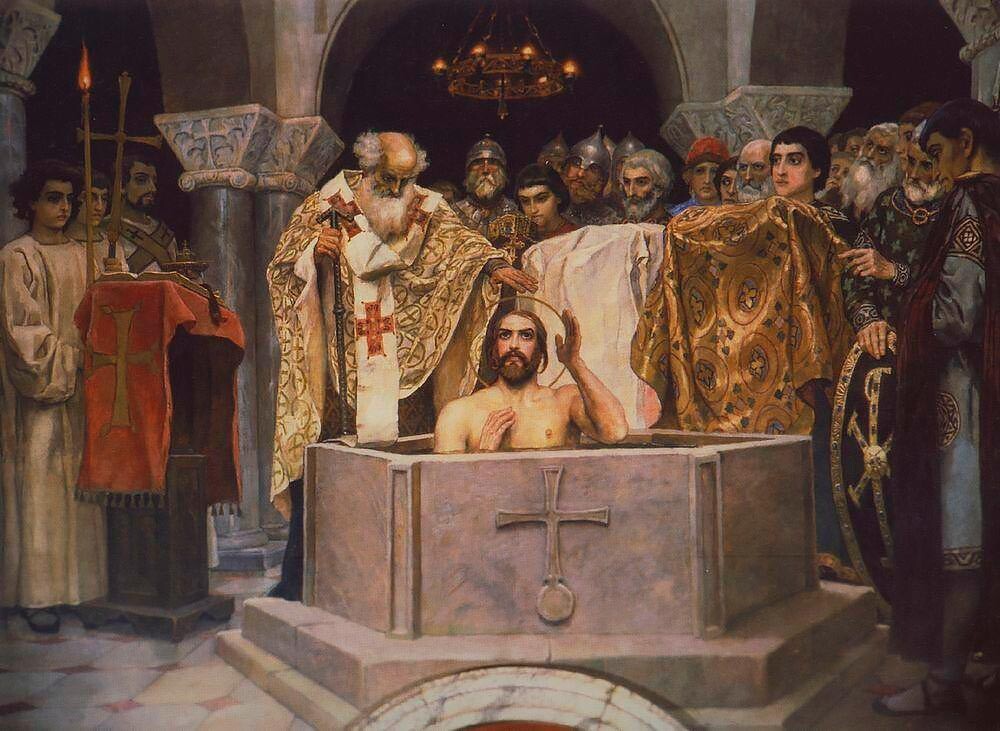 Viktor Vasnetsov. Baptism of Prince Vladimir. Fragment of the painting of the Vladimir Cathedral in Kiev, between 1885 and 1893

In the famous Russian chronicle, The Tale of Bygone Years, (also known as the Primary Chronicle), there is an episode when Prince Vladimir decided a new faith for his people. Representatives of different religions paid him a visit, eloquently describing the merits of their faith and trying to convince him to follow their beliefs. Why didn't the other religions appeal to Prince Vladimir and what did he like about Eastern Christianity, which would later become the Russian Orthodox Church?

How Prince Vladimir chose his faith

In the late 10th century, Prince Vladimir ruled Rus' from Kiev. According to the ancient chronicle, the prince was an ardent pagan, with numerous wives and concubines, and was known for his rough and violent temper. This did not, however, prevent him from developing a certain uneasiness. He saw that he was becoming surrounded on all sides by new monotheistic powers. His grandmother, Princess Olga, who is believed to have influenced him, had converted to Eastern (Greek) Christianity (she is revered in the Russian Orthodox Church as the first Christian – Saint Princess Olga, Equal-to-the-Apostles).

In The Tale of Bygone Years, there’s a detailed description of how Vladimir chose his faith. One day, in 986, after yet another successful military campaign against the Volga Bulgars, who professed Islam, Vladimir was visited by representatives of the Muslim faith, who told him that despite all his wisdom and strength, he did not know the "law". 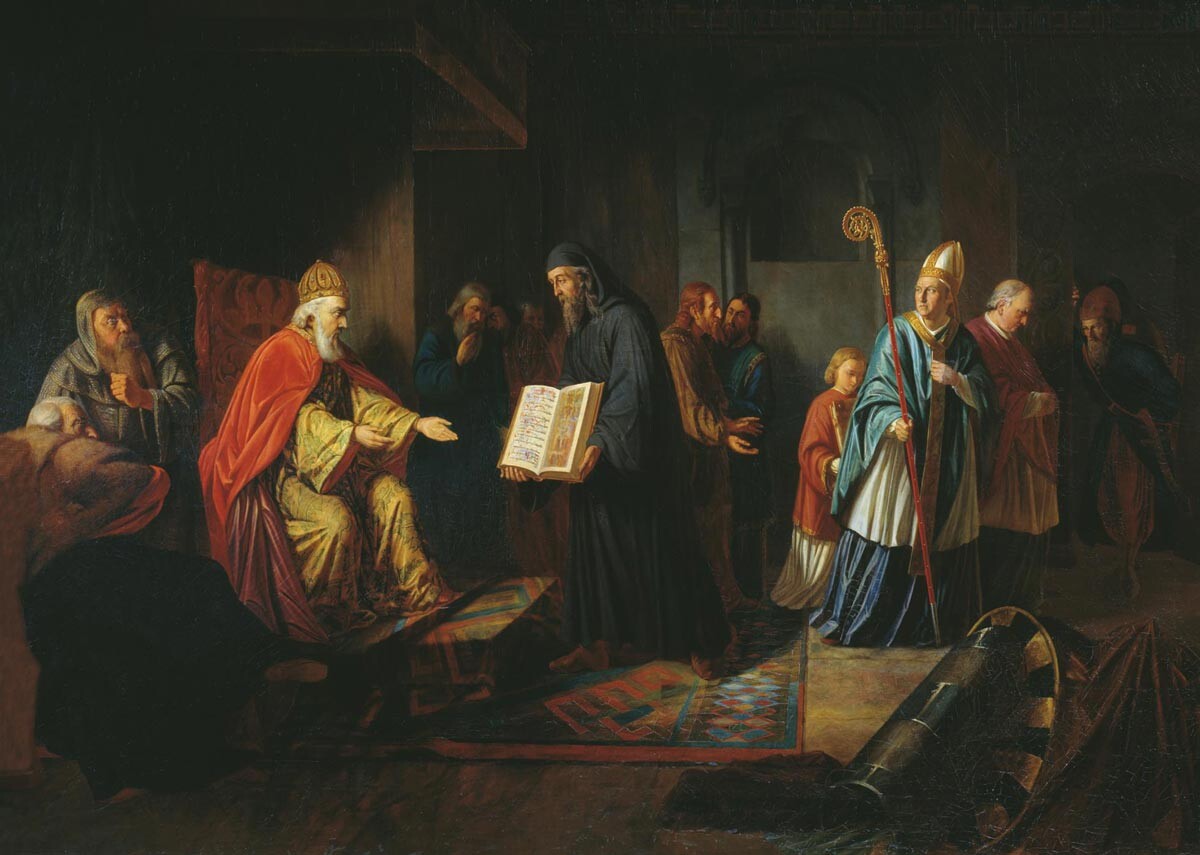 They meant that Russian paganism had no set of rules for how to live one's life. So, the Bulgars invited the prince to accept their law and to follow Mohammed. Vladimir asked them to explain what their faith consisted of. As the main monotheistic theses were largely similar in all the four religions, the prince – as well as the author of the chronicle - focused more on a concise and exhaustive definition of the differences between the faiths.

The Bulgars reportedly answered him that Islam's main distinctive features were that one must "perform circumcision, not eat pork, not drink wine, but after death, one can commit fornication with wives".

Vladimir was no stranger to sex - he had some five wives and numerous concubines. However, he did not like the idea of circumcision or the ban on pork and alcohol. According to the chronicle, Vladimir said a legendary phrase: "Drinking is the joy of all Rus'. We cannot exist without that pleasure."

The Muslims left with nothing and soon they were followed by “Germans” (as all Western Europeans were known in Ancient Russia), and who were envoys of the Pope. They told Vladimir: “Our faith is light; we bow to God, who created heaven and earth, the stars and the moon and everything that breathes, while your gods are just wood.”

They also told Vladimir about the requirement to observe a non-strict “fast according to one's strength”. Having listened to the Pope's emissaries, Vladimir sent them away with nothing: "Go where you came from, for our fathers did not accept this." Indeed, according to Western chronicles, the “Germans” came to Rus' in earlier years, but the Russian princes opposed the idea of an alliance with them, as well as their faith.

The princes chose Byzantium instead. As it turned out, that first visit of the “Germans” to Kiev had been organized by Princess Olga. She hoped that the Byzantine emperor would be afraid of a possible rapprochement between Russia and Catholic Europe and the loss of peace with Kiev, and would make concessions to the Kievan princes, concluding a mutually beneficial agreement. The emperor needed the Russian army in the fight against the Arabs for Crete. And Olga's calculation turned out to be correct. 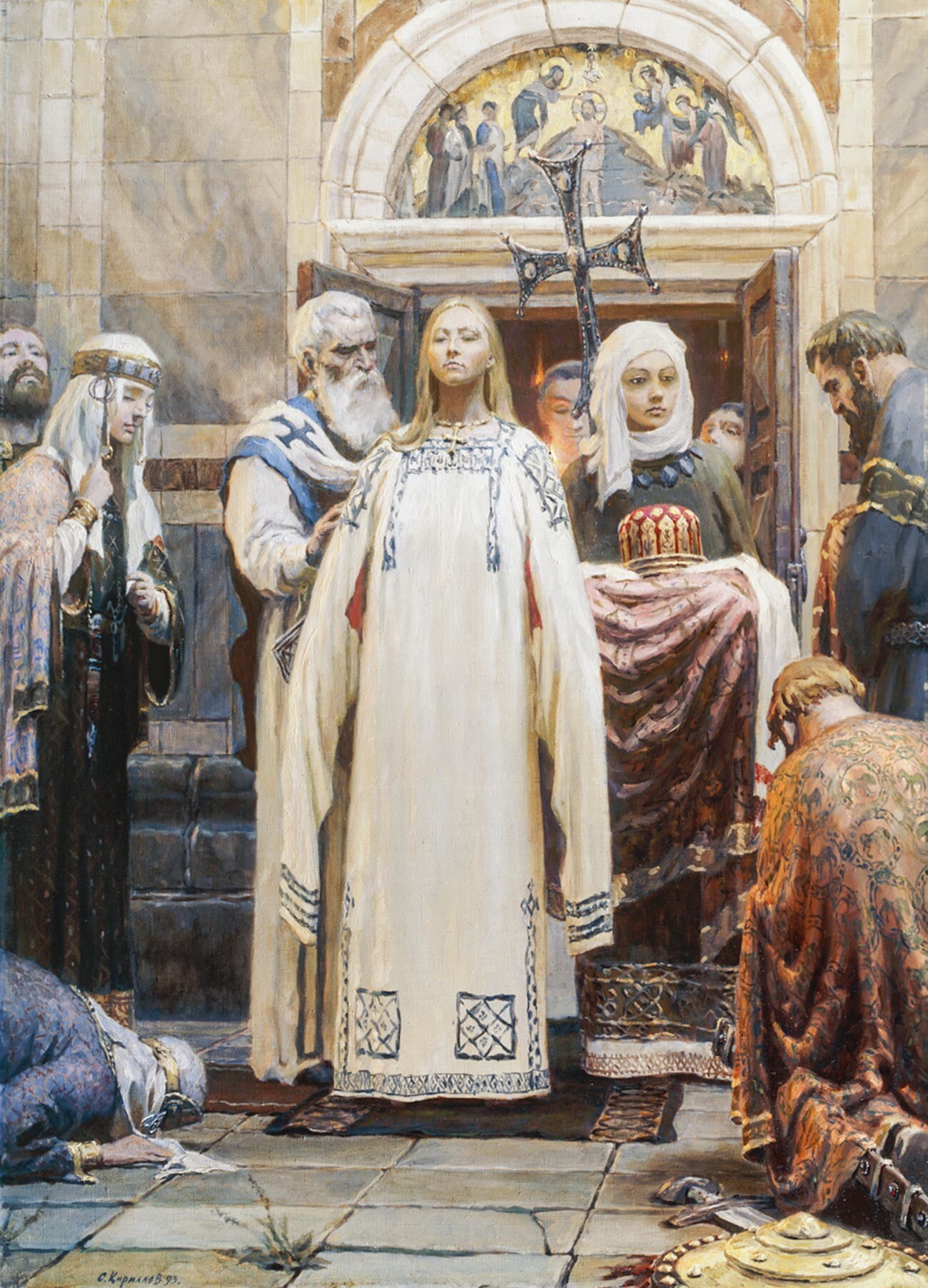 After the Pope's envoys left, Vladimir was visited by the Khazar Jews (the prince had already been on military campaigns against Khazaria and imposed tribute on it). But Vladimir was not impressed by the relationship between God and the people whom he had expelled from their land and who had become a wandering people, so he rejected them: “How can you teach others when you yourself have been rejected by God and scattered? If God loved you and your law, then you would not be scattered over foreign lands. Or do you wish the same for us?"

According to the chronicle, next, Vladimir was visited by a Greek “philosopher”. He criticized the other religions and explained to the prince in detail the essence of Greek Christianity and its faith in a crucified man. Vladimir was impressed, but decided to take some time to think - and choose between Islam and Christianity. He sent his trusted emissaries to observe the religious rites and services in those two faiths.

His envoys did not like what they saw in mosques; however, they were deeply moved by the service in a Greek church. Upon returning home, they told Vladimir: “There is no other such spectacle and beauty on earth, and we don’t know how to describe it. We only know that God is with these people, and their service is better than in all other countries.”

Why adopting Christianity was to Russia's advantage 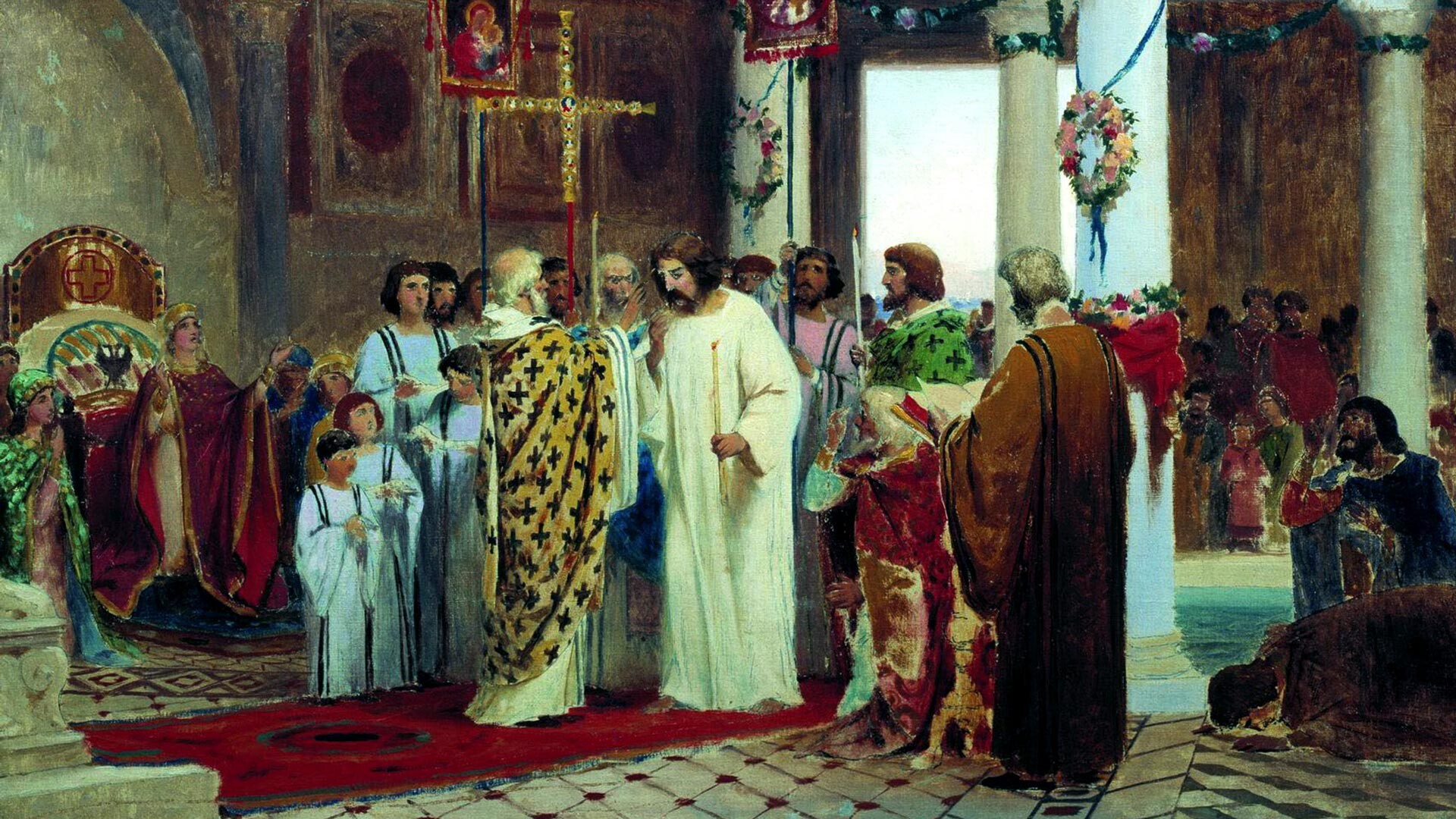 Feodor Bronnikov. The Baptism of Kiev Prince Vladimir in 987 (1883)

Needless to say, Russian and Western historians alike have come up with numerous pragmatic explanations for the choice that Old Rus' made in favor of Greek Christianity. According to historian Vasily Klyuchevsky, the main strategic goal of the Kiev princes was to protect their borders from an attack by an external enemy and to secure foreign trade routes.

Vladimir had to make sure that the lands and tribes living on the occupied lands, which had recently been united under his rule but were still fragmented, paid taxes on time, were loyal to his government and served it in the event of an external attack.

According to Klyuchevsky, Russia's conversion to Christianity – and the form of Christianity that came from Byzantium – had been facilitated by the multitude of cultural, trade and political ties that existed between Rus' and Byzantium. Partly it was also driven by Byzantium's desire to “tame” a neighbor that was charged with an energy to expand.

Varangian princes who ruled in Rus' had attacked Byzantium more than once. In order to prevent raids by the belligerent pagans, the Byzantine emperor, long before the reign of Vladimir, had dispatched missionaries to Rus'. 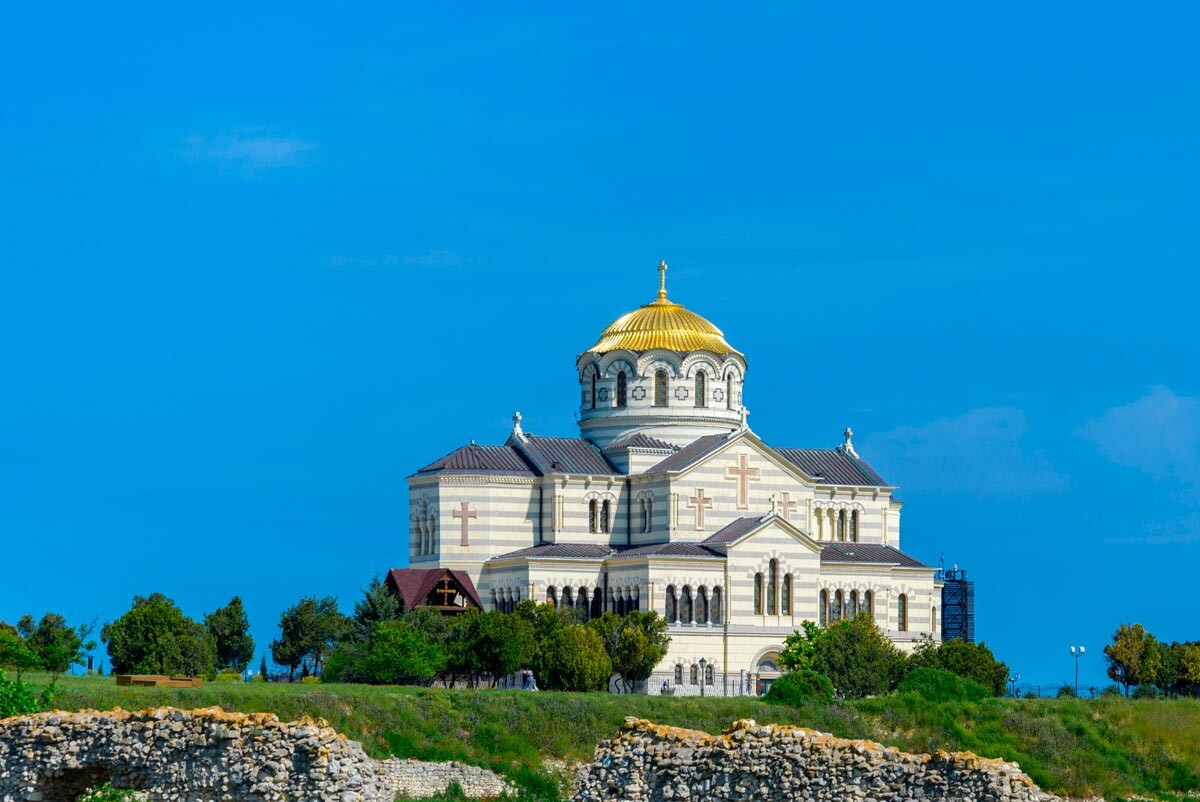 In addition, Vladimir undoubtedly wanted to benefit from his conversion to Greek Christianity. In 988, he captured the Byzantine city of Korsun (present-day Chersonesus in Crimea) and demanded - in exchange for peace - to be married to the emperor's sister, Princess Anna. Under the threat of Vladimir's invasion of Constantinople, the emperor agreed, but demanded that Vladimir first become a Christian. According to legend, Vladimir was baptized in Korsun (in the 19th century, the St. Vladimir Cathedral was erected at the site).

Marrying Anna was, first of all, a sign of prestige for Vladimir. He was no longer considered a barbarian pagan prince, but a relative of the emperor himself. The chronicle notes a miraculous change that took place in the prince's character after his baptism. Reportedly, he renounced fornication and became virtuous and merciful. When she arrived in Kiev, Princess Anna was accompanied by Byzantine clerics and church ministers, who began to convert Russians to Christianity, spread literacy and teach the Law of God. 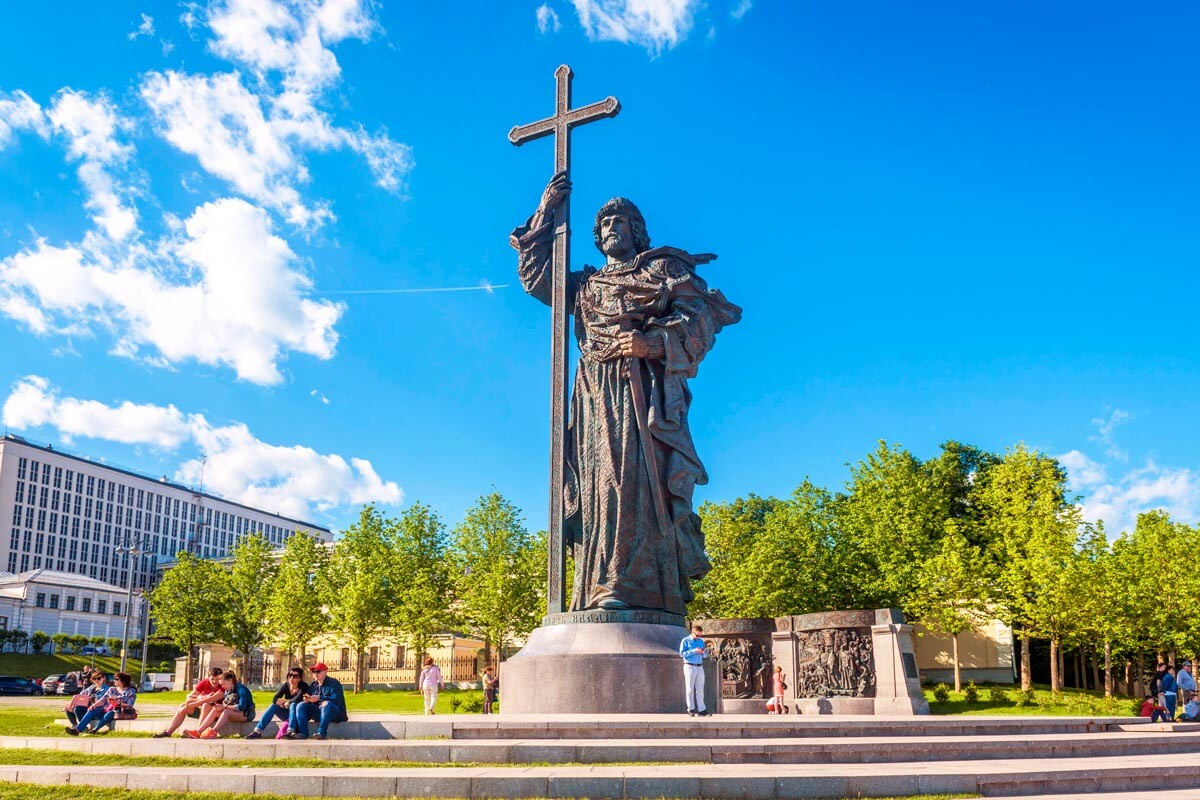 Monument to Vladimir the Great in Moscow

In any case, no matter the true reasons and under what circumstances Prince Vladimir converted to Eastern Christianity, the event took place in the indicated period and had enormous and far-reaching consequences for Russia's history and future. Prince Vladimir was canonized as Equal to the Apostles, and became popularly known as Vladimir the Fair Sun.