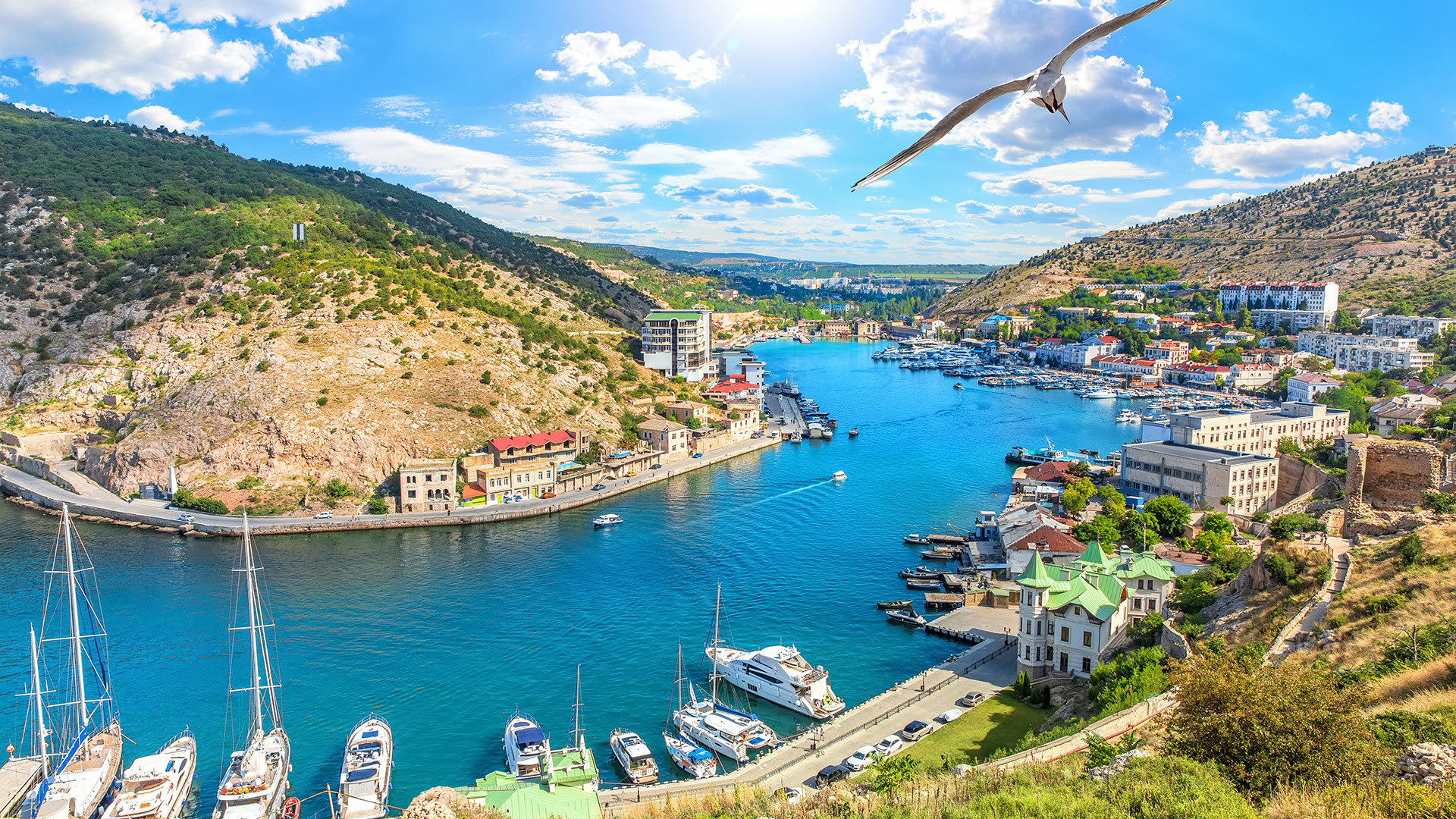 Getty Images
The picturesque Black Sea peninsula is famous for its beaches, mountains, vineyards, palaces and rich history. We spotlight the unmissable places when traveling in Crimea. 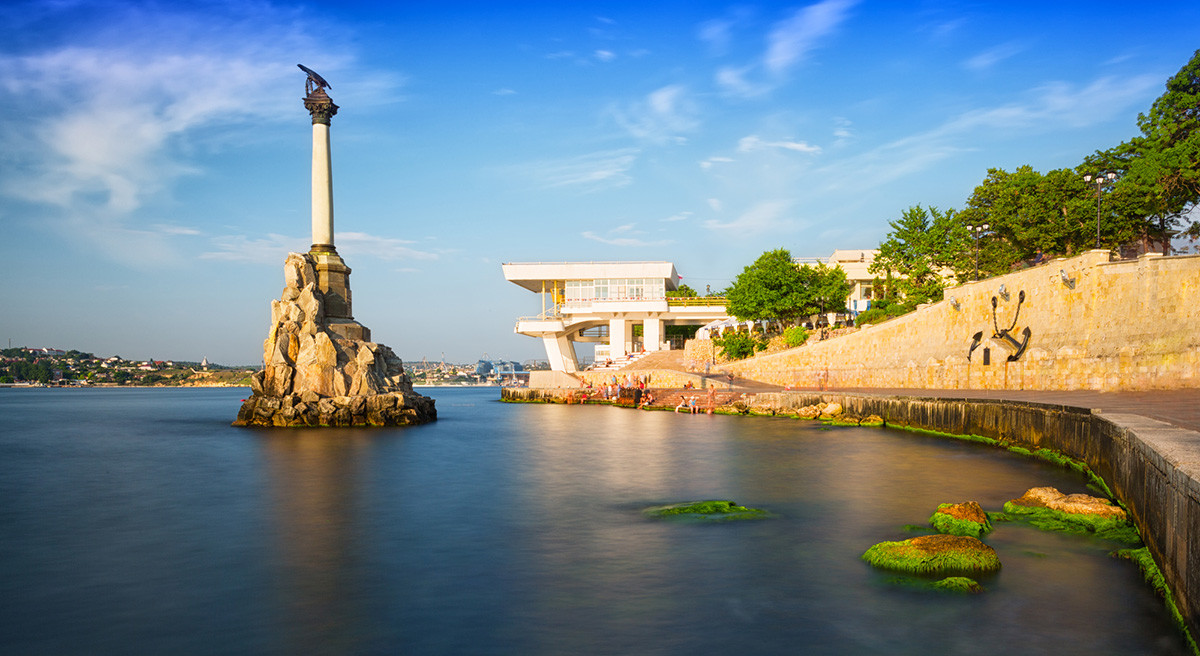 The Monument to the Sunken Ships

The best place to start your Crimean voyage is in the regional capital of Sevastopol. Home to the Black Sea Fleet, it has the status in Russia of a City of Military Glory. Take a sightseeing boat along Sevastopol Bay and view the many ships, including ones on active service. Be sure to visit the magnificent Defense of Sevastopol panorama, which tells the story of the Crimean War 1854-55. 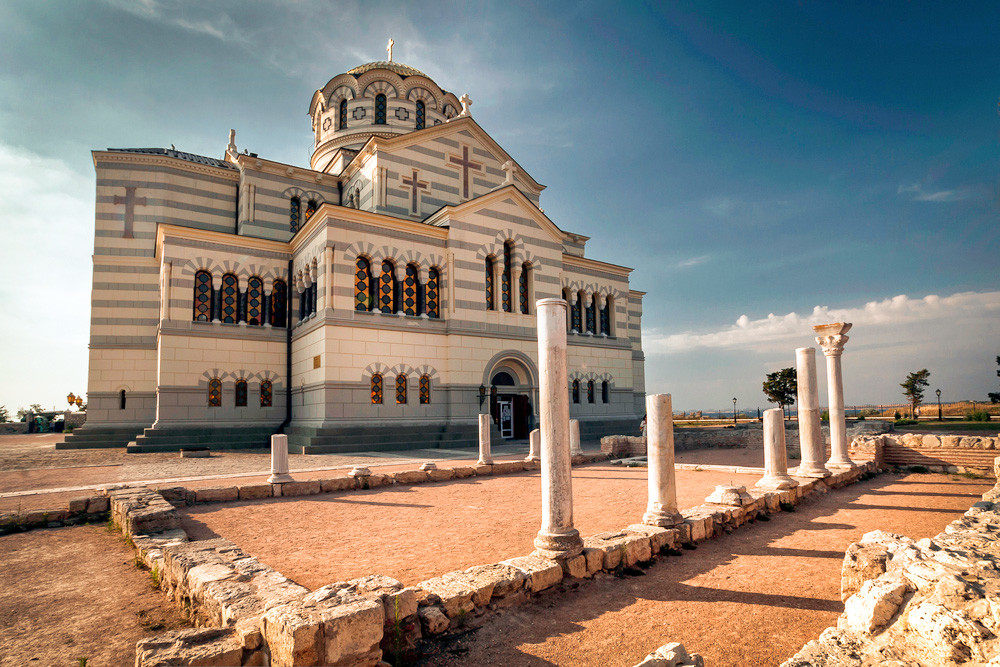 The Saint Vladimir Cathedral in Chersonesos

One of the city’s main attractions is the ruins of the ancient Greek polis Chersonesus Taurica. In the 10th century, it belonged to Byzantium and, according to legend, was the place where Prince Vladimir converted to Orthodoxy and baptized Rus. 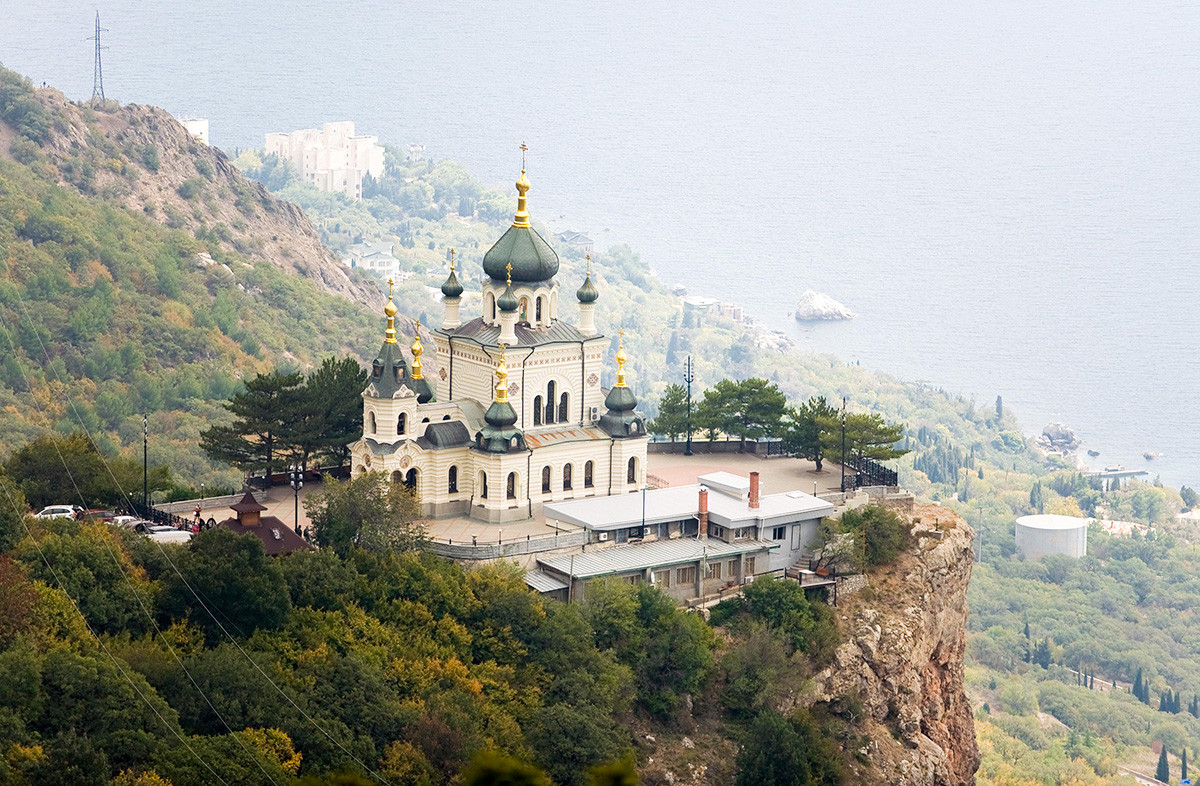 The Church of the Resurrection of Christ

Foros is the southernmost point of Crimea. In Soviet times, this ancient settlement with its picturesque rocky coast and mild climate, breezes and pine forest was the party elite’s destination of choice for spa vacations and treatment. Incidentally, its sanatoriums are still operational.

The main attraction of Foros is the 19th-century Church of the Resurrection, overlooking a steep cliff. From the church, be sure to go up into the mountains and stop in at the Baydarskie Vorota restaurant on the mountain pass for the best chebureki (mutton pies) in Crimea and some equally mouth-watering views. 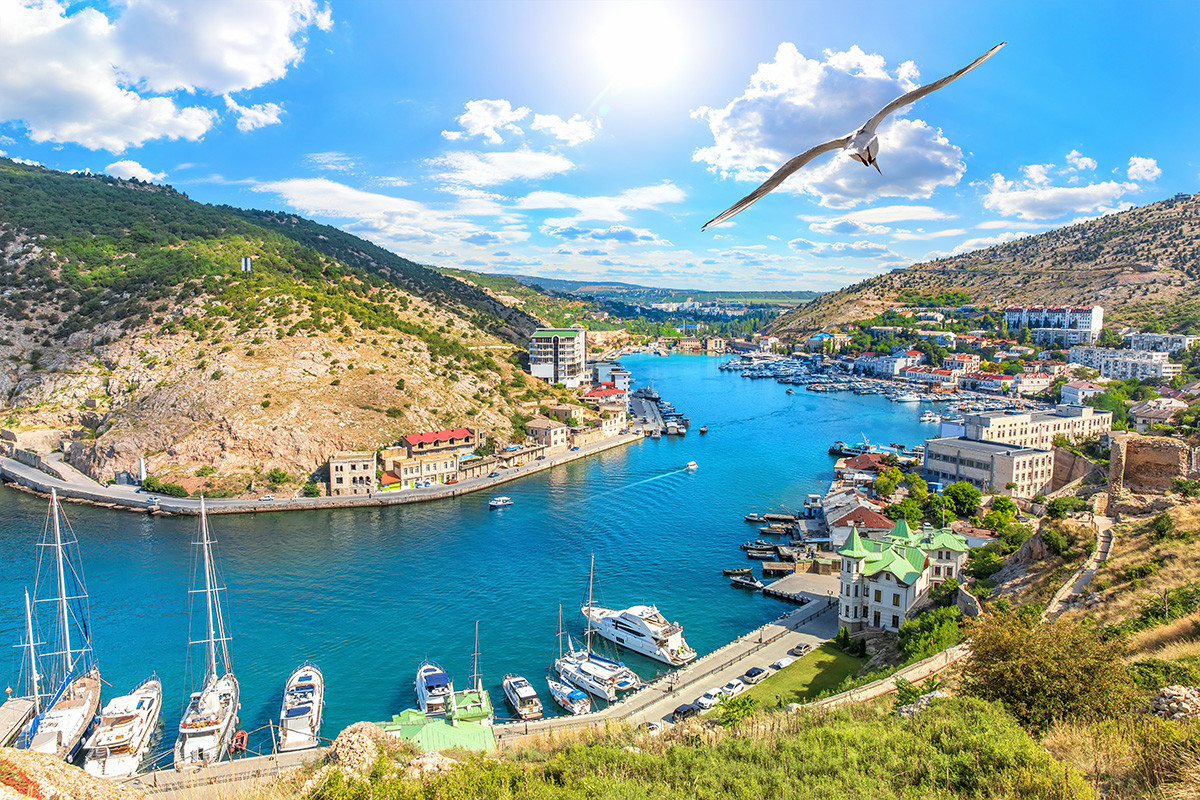 The winding Balaklava Bay offers an incredible natural landscape, as well as a real Crimean marina, dotted with yachts and boats. We highly recommend renting a cutter and sailing across the bay to the open sea to the rocky caves. 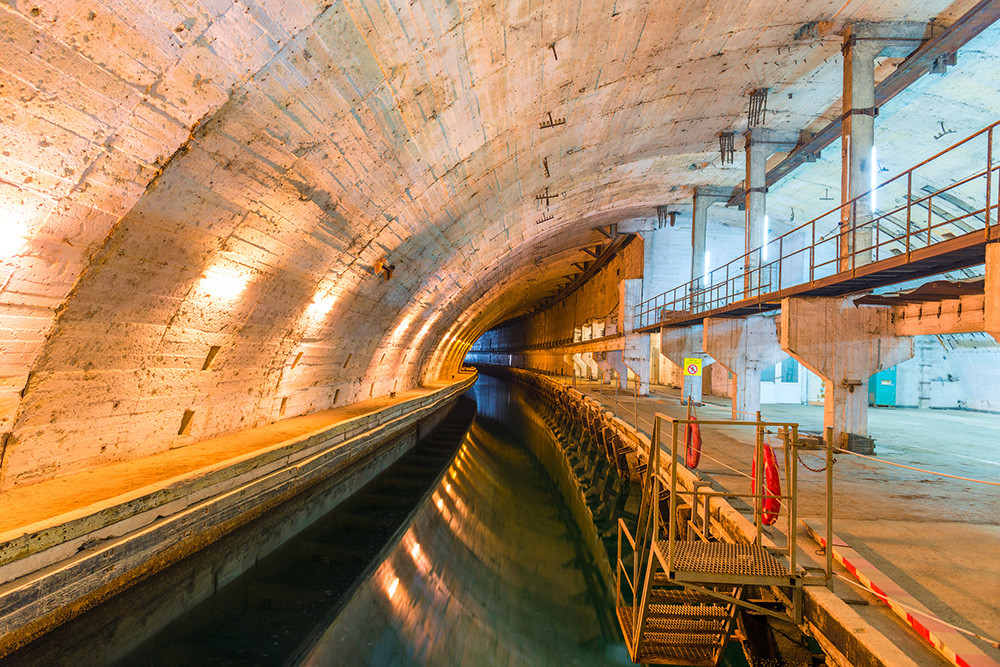 Fortifications in the Military History Museum of Balaklava

But perhaps the highlight of Balaklava is the Military History Museum. It is located inside an underground complex which in Soviet times housed a shelter and a submarine repair facility, not to mention a nuclear arsenal. 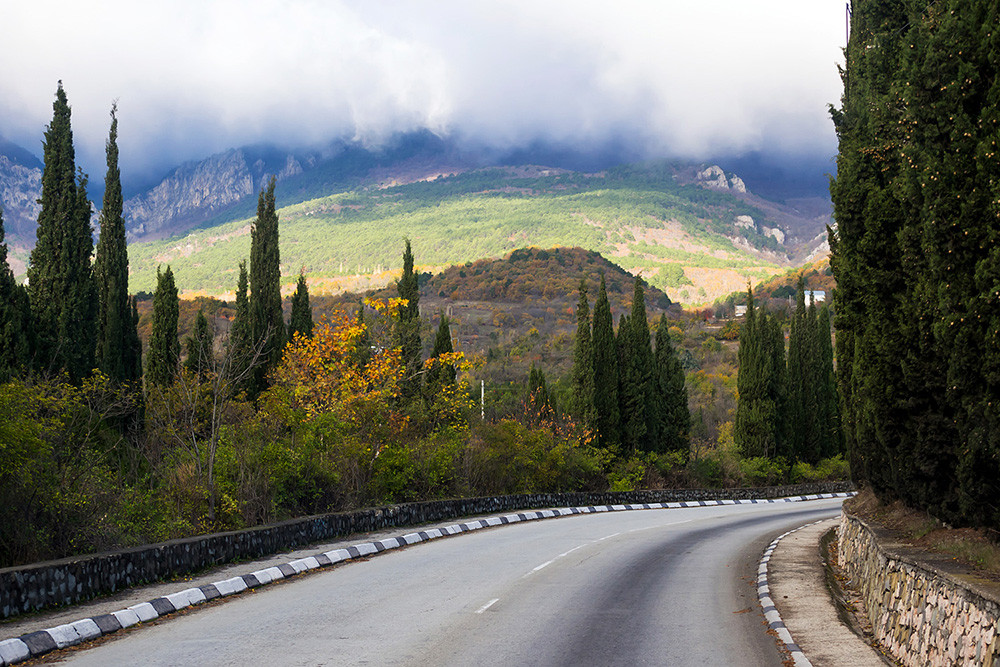 A view on the longest trolleybus route in the world

There are many ways to get from Simferopol Airport to Yalta, but we recommend that you try out the longest trolleybus route in the world — 86 kilometers along a picturesque mountain road with views of the sea.

Yalta is the unofficial capital of the southern coast of Crimea, and one of the most popular resorts on the peninsula, famous for its sandy beaches. It is also a party city that never sleeps, full of lively restaurants serving fresh fish and seafood, and all kinds of people strolling down the long promenade, where you'll also see street artists and magicians. 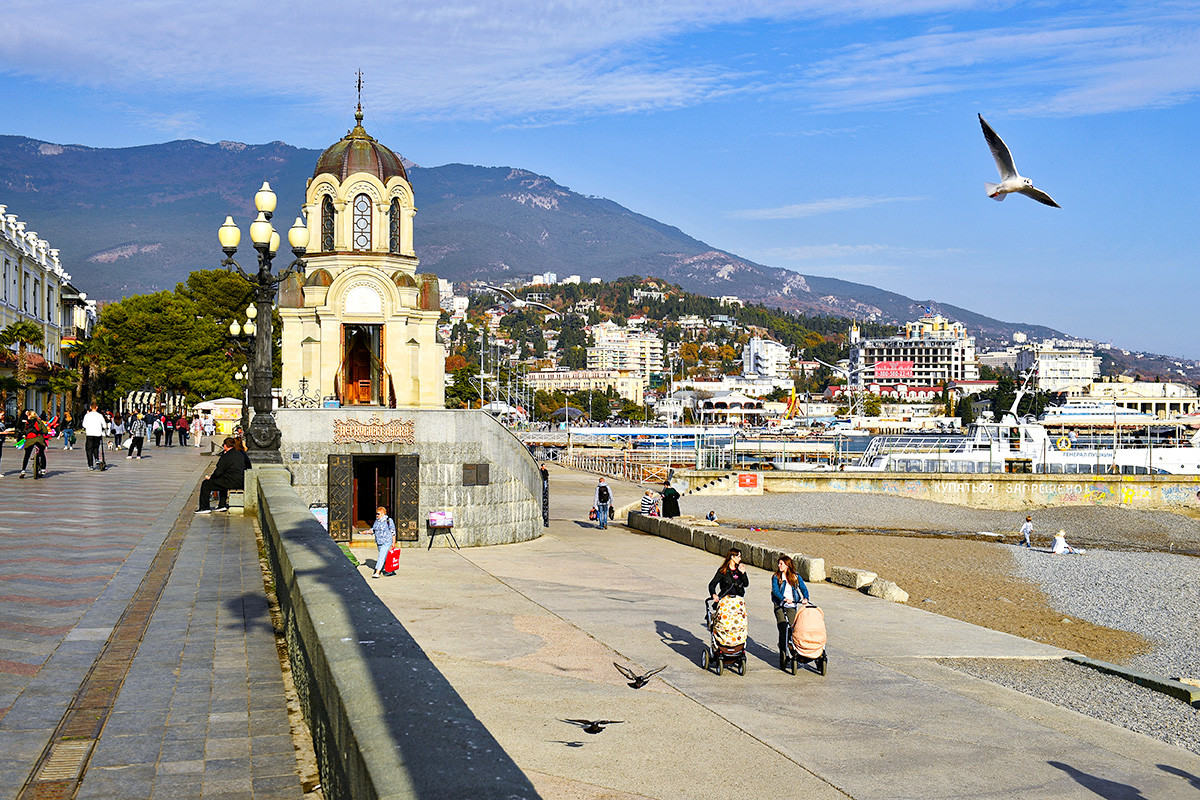 Russian writers were fond of taking health trips to Yalta — Anton Chekhov spent the last six years of his life here, and his cottage has been converted into a museum. On the embankment there is even a monument to Chekhov and the “lady with lapdog” from his eponymous story, which was set here. 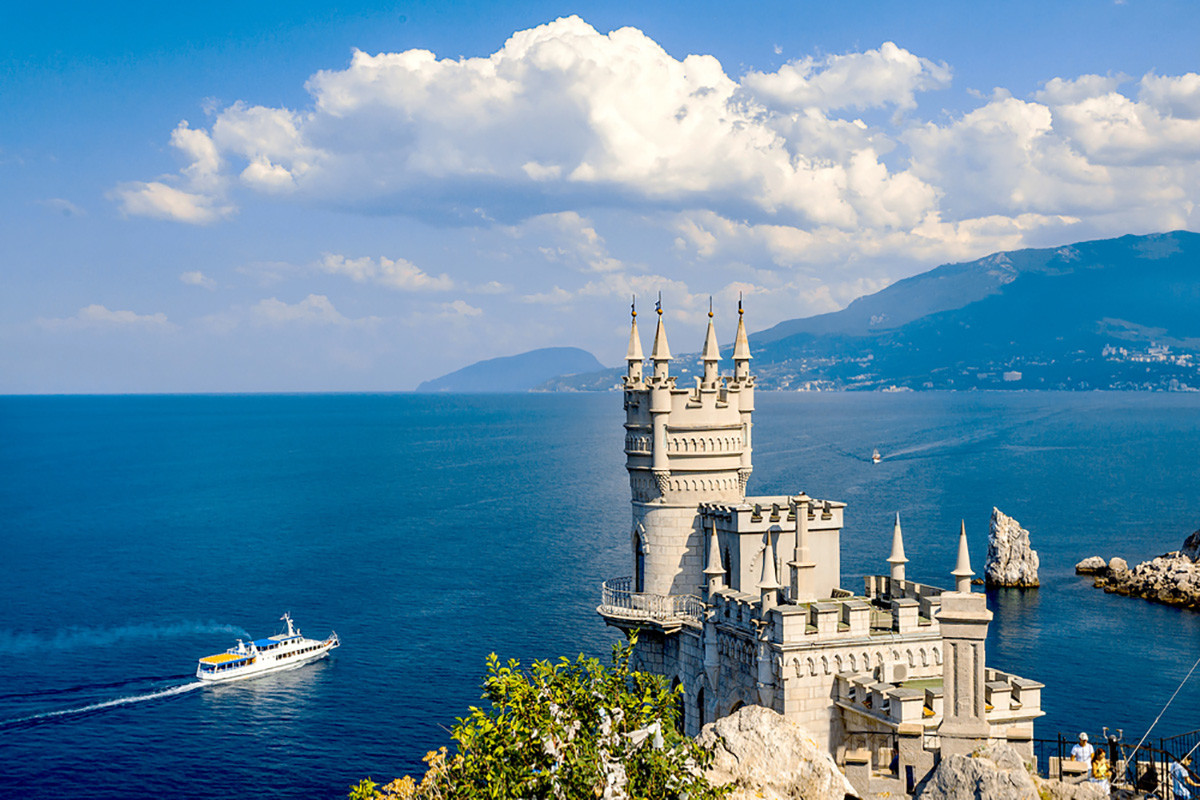 Not far from the city is the calling card of the whole of Crimea: the decorative Gothic-style Swallow's Nest castle. We recommend taking a pleasure craft along the southern coast (known as Greater Yalta) and gazing up from the water at this majestic edifice perched bird-like atop a sheer cliff. 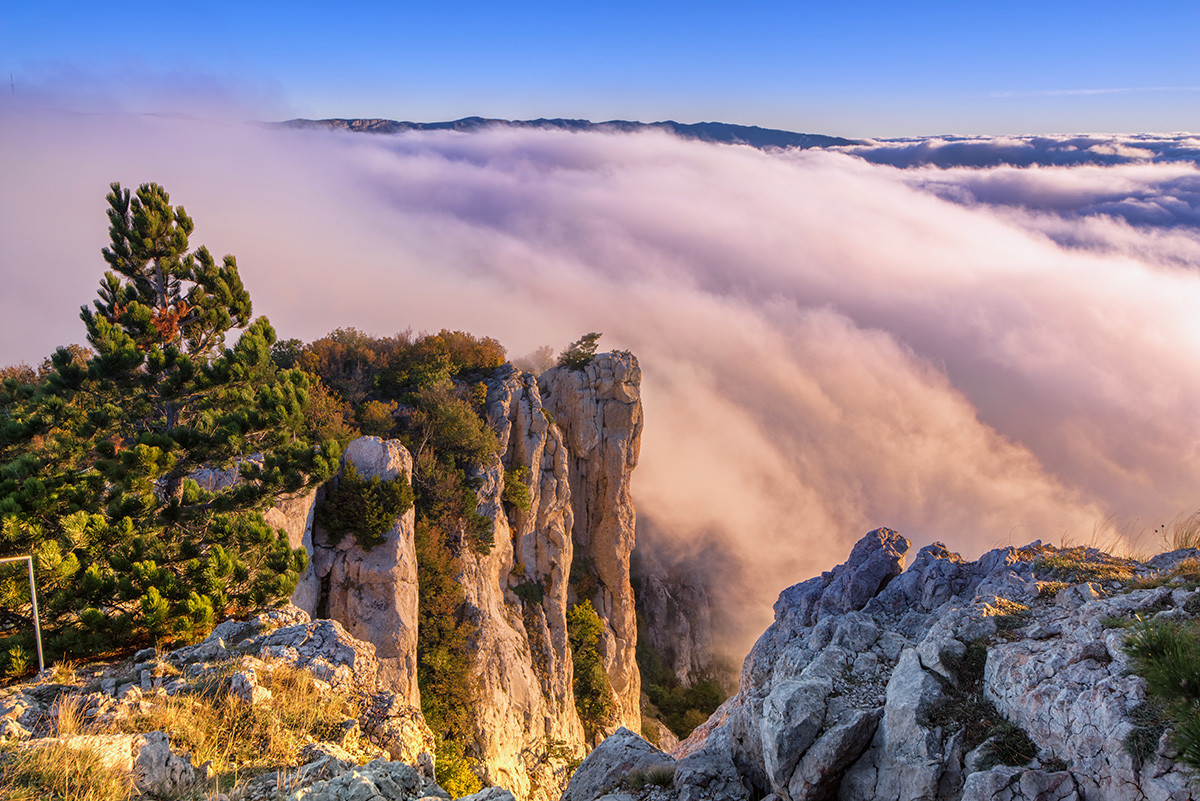 A view from the top of Ai-Petri

In addition to seaside recreation, Crimea is famous for its mountains. One of the highest peaks is Ai-Petri (1,234 m), which can be reached via one of the longest unsupported cable cars in Europe. A slightly less dramatic way up is by road (albeit an extremely serpentine one), while enjoying a view of the Uchan-Su waterfall. 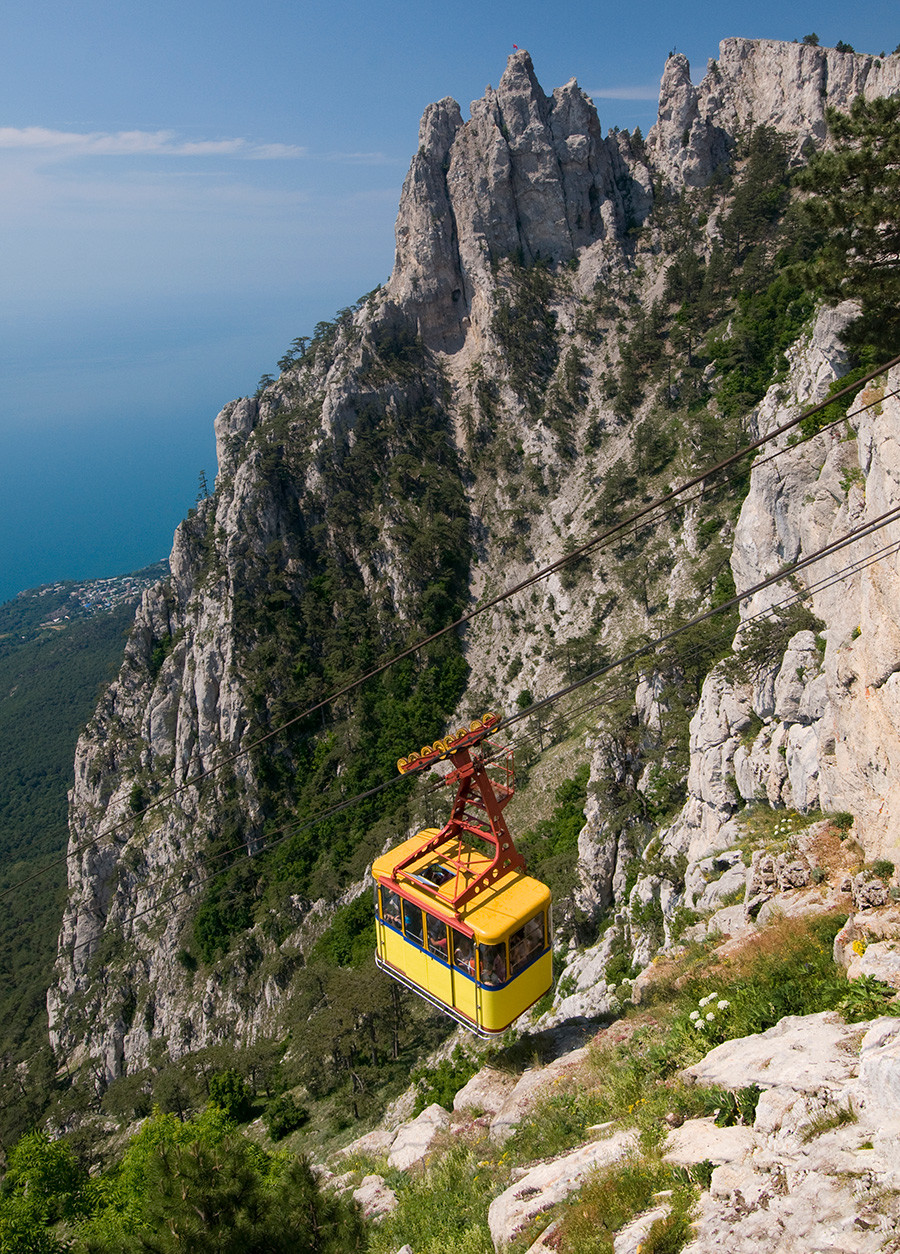 One of the longest unsupported cable cars in Europe

At the summit, go to the restaurant for some Crimean Tartar dishes: pilaf, laghman (noodles, meat, veg) and chebureki, and taste some authentic Crimean wines. But don’t forget to dress warmly, even in summer. It’s very windy high up. 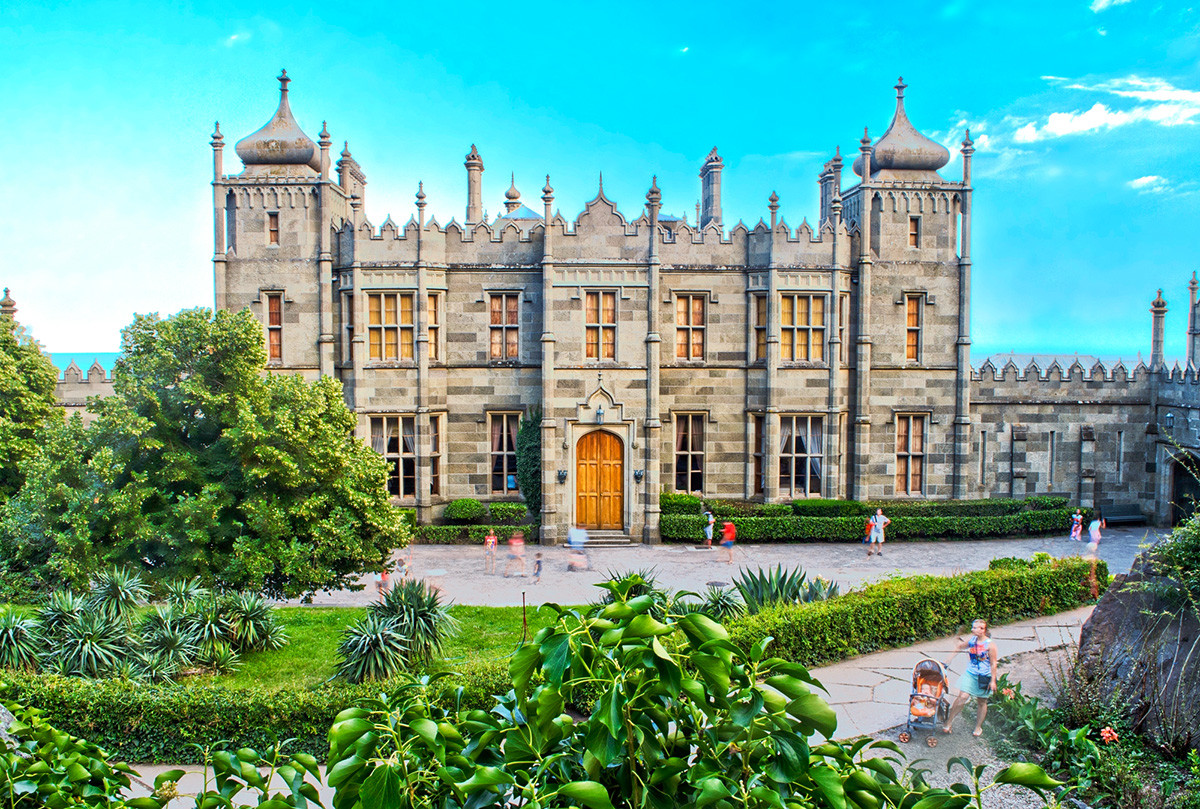 This small resort town is famous primarily for the Vorontsov Palace, built in the English style. You can read more about the palace here.

In the 19th century, an elegant park covering ​​more than 40 hectares was laid out around the palace. Its landscape featuring numerous sculptures, fountains, terraces, and more than 200 species of plants from all corners of the globe is a tourist magnet. Incidentally, Alupka offers incredible views of both Ai-Petri and the Black Sea, which is why the illustrious seascape painter Ivan Aivazovsky was so fond of it. He even has a cliff named in his honor. 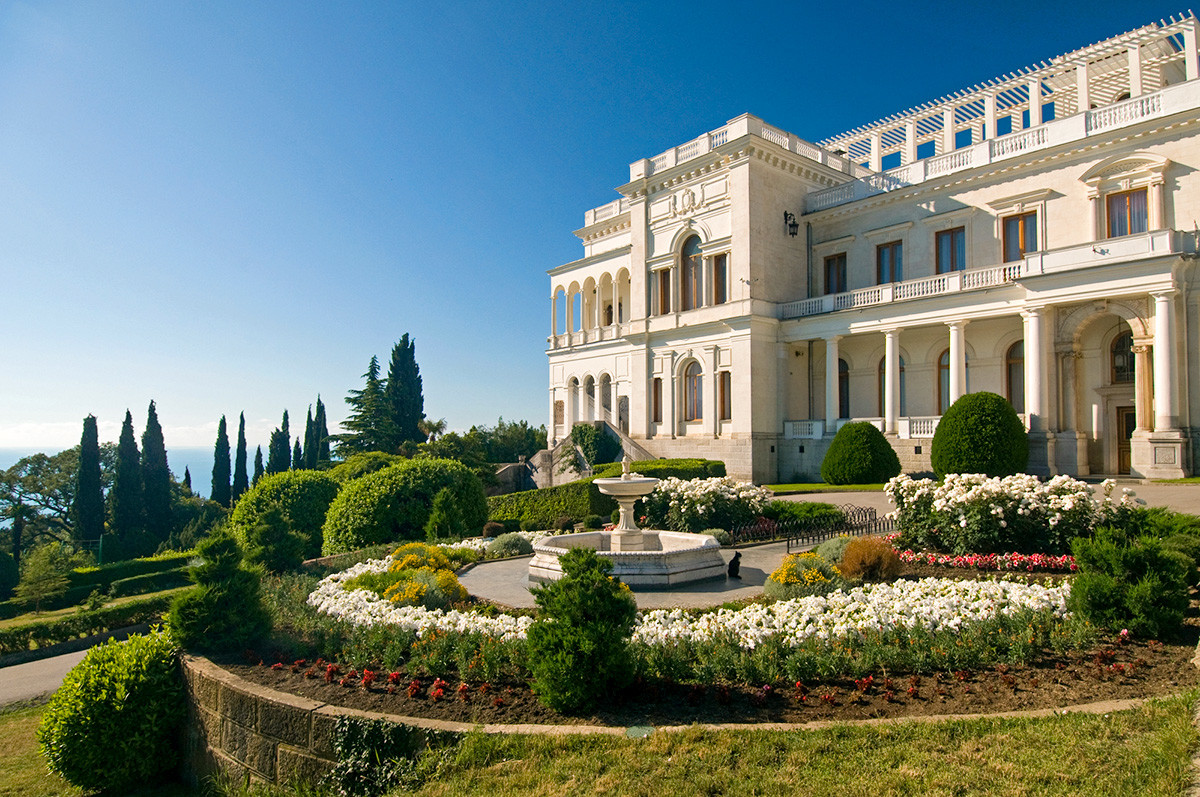 Not far from Yalta stands one of the most luxurious palaces in Crimea, which served as the summer residence of Emperor Alexander II. It was customary for the Russian tsars to vacate here in summer with their families. Later, Nicholas II had a separate wing built for himself.

In Soviet times, the imperial palace was converted into a sanatorium for workers and peasants; and the famous writer Maxim Gorky enjoyed rest cures here. In February 1945, during WWII, it hosted the Yalta Conference of the Allied leaders Joseph Stalin, Winston Churchill and Franklin Roosevelt.

Incidentally, the Livadia Palace is where the protagonist of Jonathan Littell’s award-winning novel The Kindly Ones resides and, as the author describes, takes therapeutic strolls along the Tsar's Path. You can read more about the palace here. 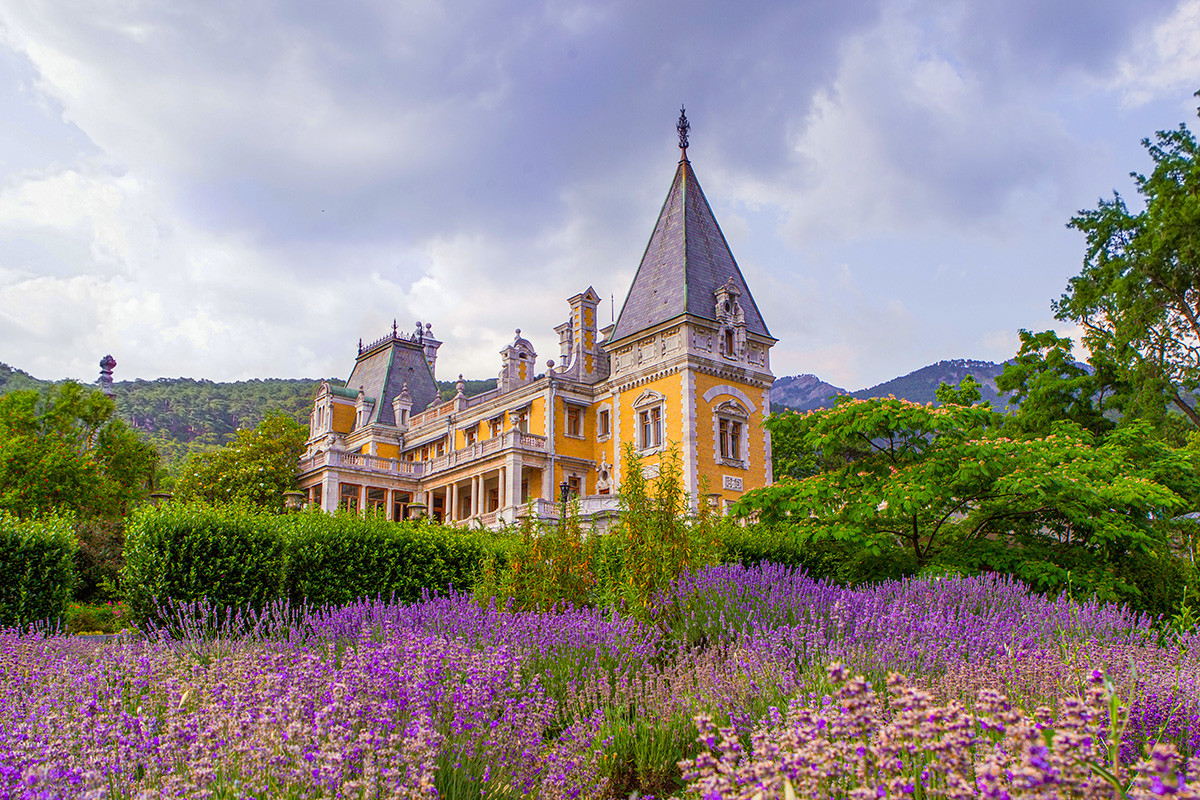 Another summer imperial residence with a beautiful French park can be seen in the settlement of Massandra. However, it was not used as a long-term residence by any of the tsars, who preferred Livadia. Read more about this enigmatic place here. 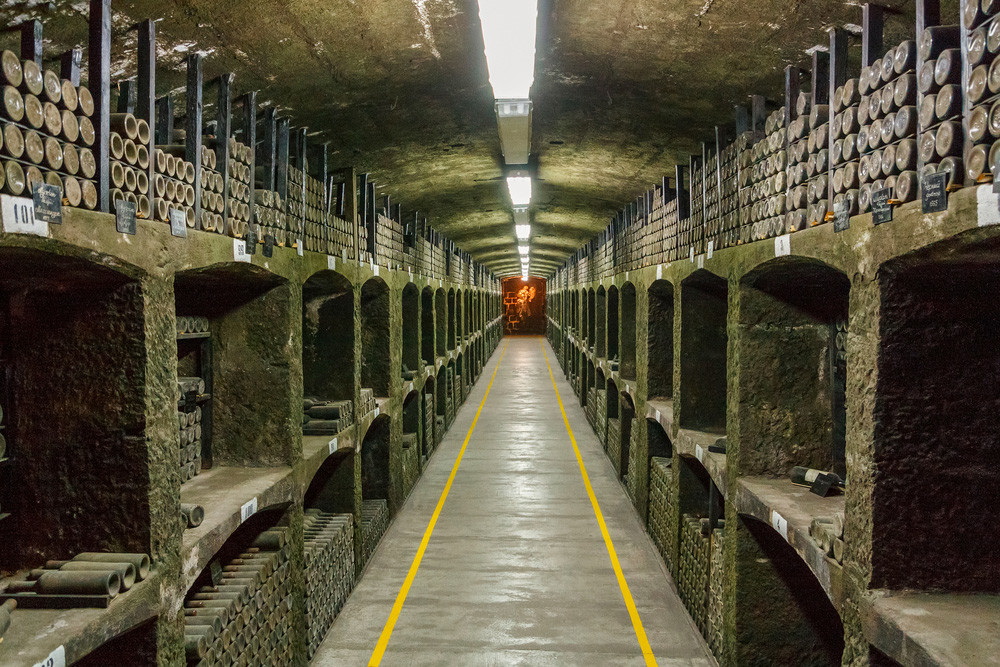 Visiting Crimea and not tasting the local wine is simply a crime. Thankfully, the Massandra wine factory offers excursions and tastings in eight of its branches across the peninsula. There you can visit the vineyard, wander around the wine cellar, and observe the winemaking process.

9. Yevpatoria and the pink Lake Sasyk 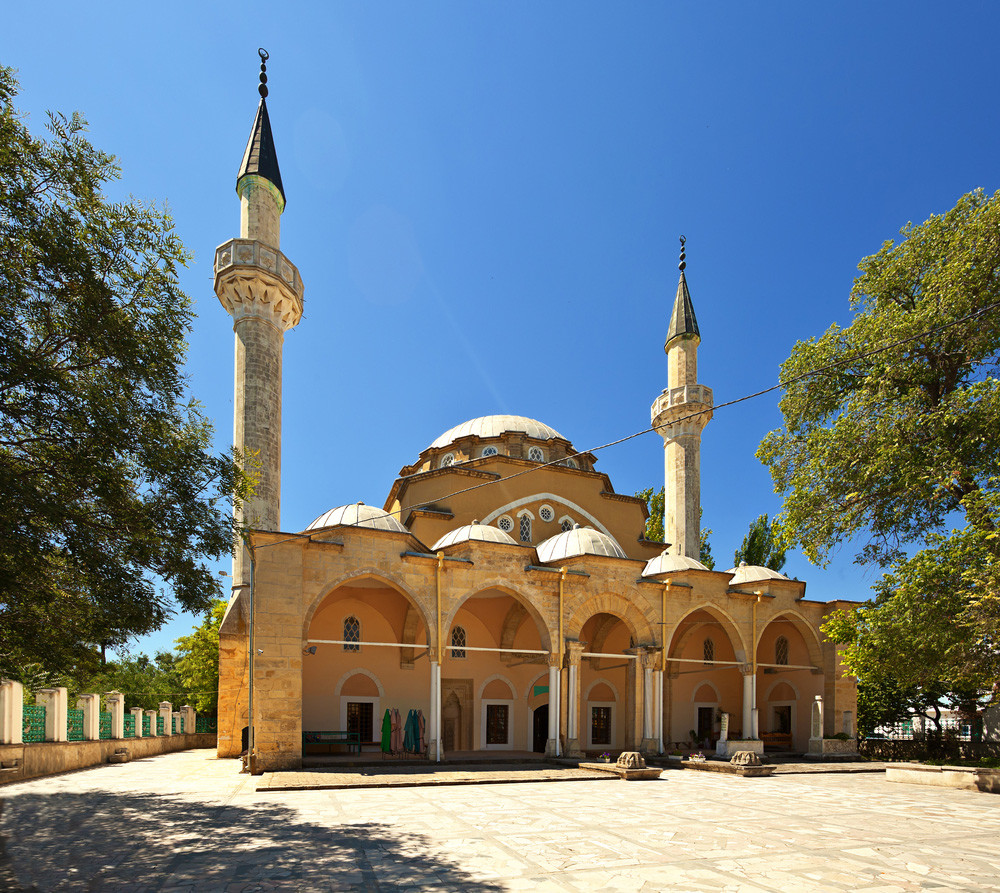 This city is ideal for families with children — it boasts sandy beaches and a warm shallow sea. Here many children's camps have remained since Soviet times. It is also home to the only Muslim monastery in Crimea, dating back to the 15-16th centuries, as well as the 16th-century Juma-Jami Mosque, both reminders of the centuries-long Ottoman rule over Crimea. 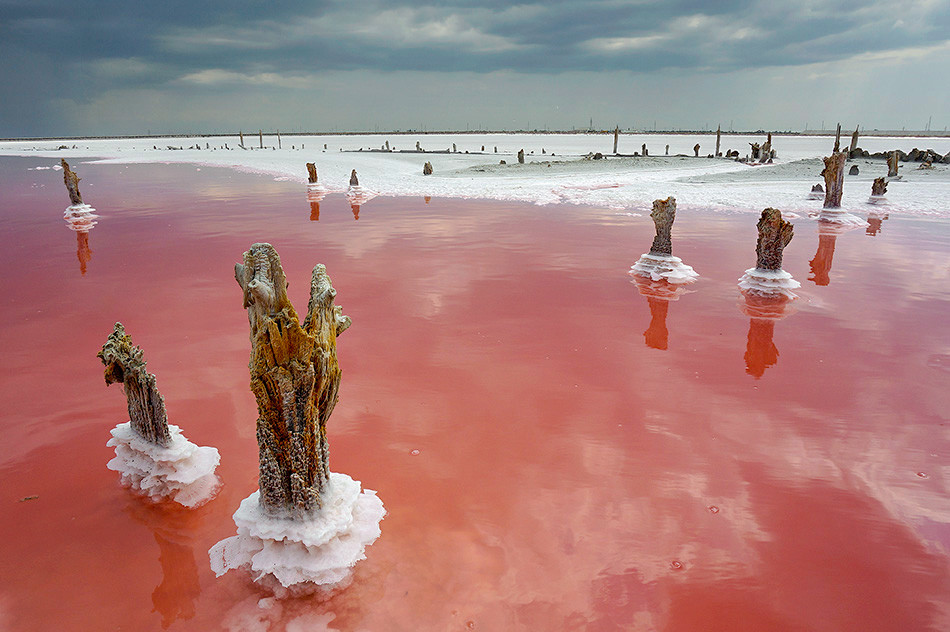 Not far from Yevpatoria is a genuine miracle of nature in the shape of Lake Sasyk, separated from the Black Sea by a narrow strip of land. The lake’s uniqueness lies in its color, which varies from pink to bright red. The secret is in the carotene-producing microorganisms that live in the water. The ancient Greeks were the first to extract salt from the lake, which was so good it later made its way onto the table of the Russian tsars. And concealed under the layer of salt is therapeutic mud. See some incredible photos of the lake here. 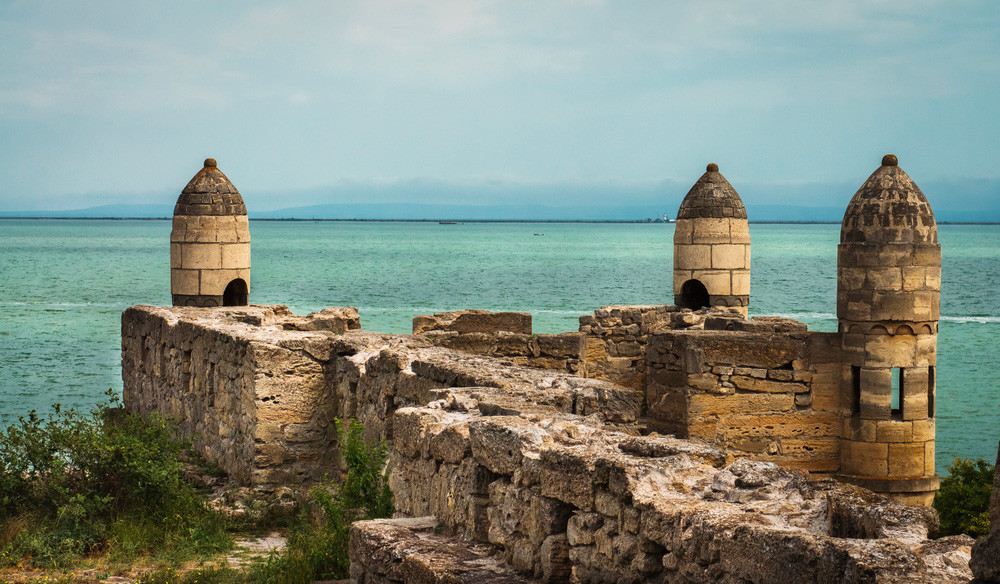 Located on the eastern coast of Crimea, Kerch is the first city that greets visitors coming via the recently constructed Crimean Bridge. Kerch also has the distinction of being the oldest city in Russia, believed to have been founded by the ancient Greeks in the late 7th century BC. 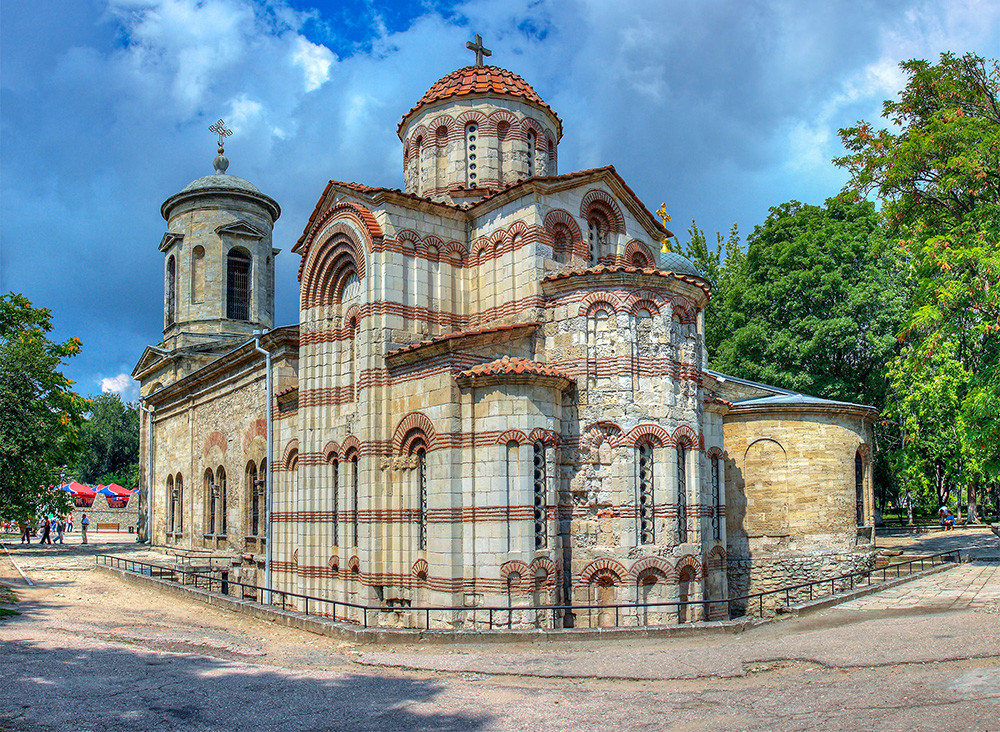 The 8th century Church of Saint John the Baptist

Remarkably, Kerch has preserved archeological evidence of all the historical periods of Crimea: from ancient ruins and an 8th-century Byzantine basilica to a late 17th-century Turkish fortress and a 19th-century Russian citadel.

Read more: How did Crimea become part of the Russian Empire?