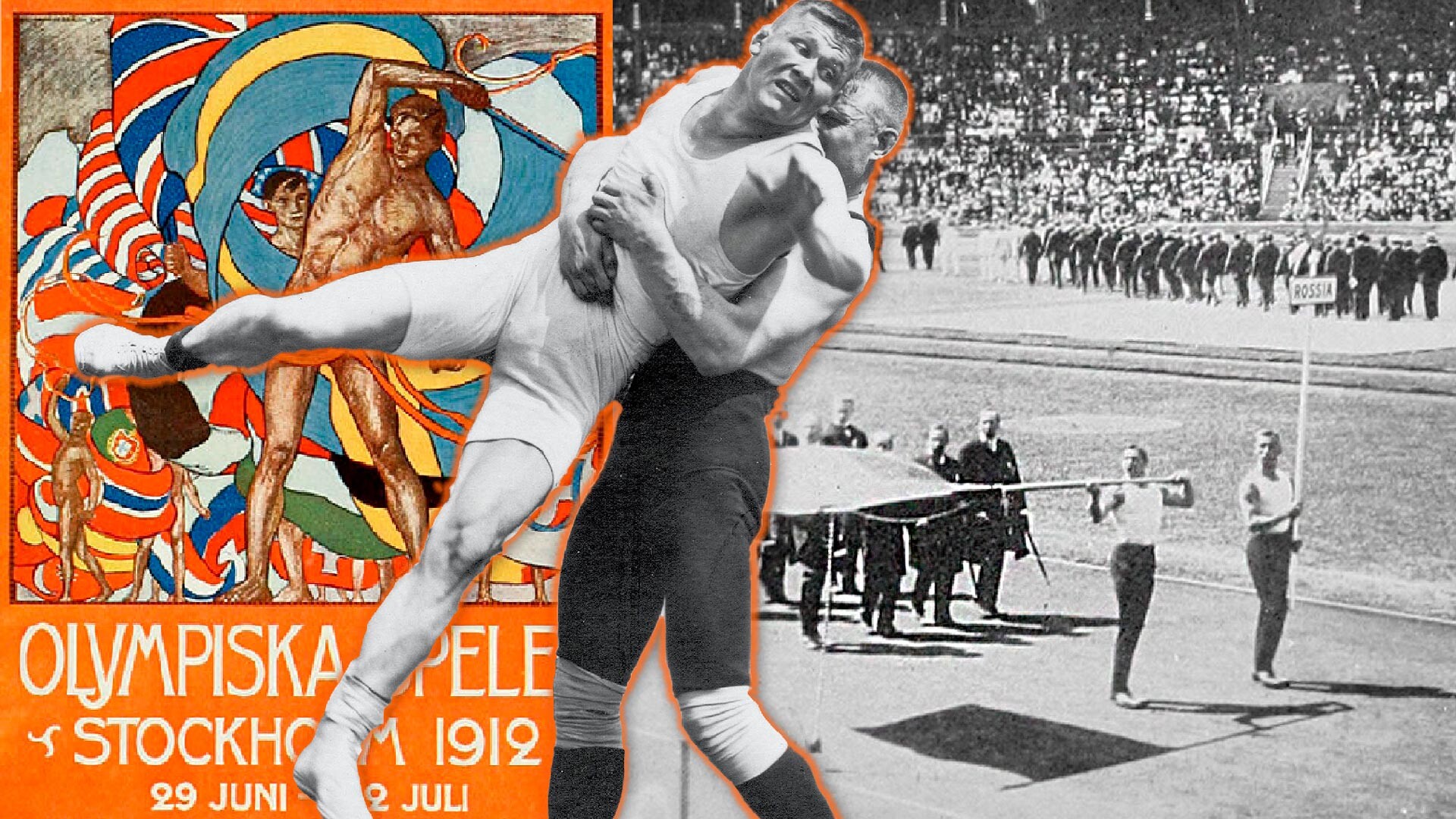 Russia Beyond (Photo: Public Domain)
The Summer Games in Stockholm ended up being the very last Olympics the Russian Empire took part in. The next time, already as the Soviet Union, athletes attended the Games would be forty years later!

The history of the Olympic movement in the Russian Empire is quite short and predictably ends up with the dissolution of the Empire itself. The country had only competed in three Olympic Games. Skipping the very first Games in modern history in Athens, in 1900, Russia participated for the first time in the Second Games in Paris.

Then the Russian athletes joined the 1908 Games in London, where figure skater Nikolai Panin won Russia its very first and only Olympic medal. 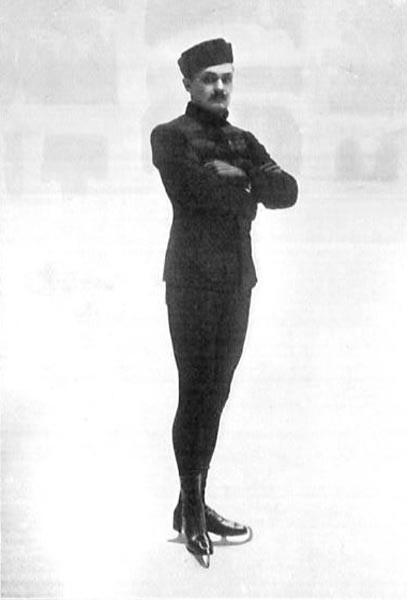 Nikolai Panin-Kolomenkin, the first person from Russia to win a gold medal for the Olympics (pictured at the 1908 London Games)

And, finally, Russia took part in the 1912 Stockholm Games, which turned out to be its very last. Here are some a few photos of Team Russia at the Olympics that happened 110 years ago. 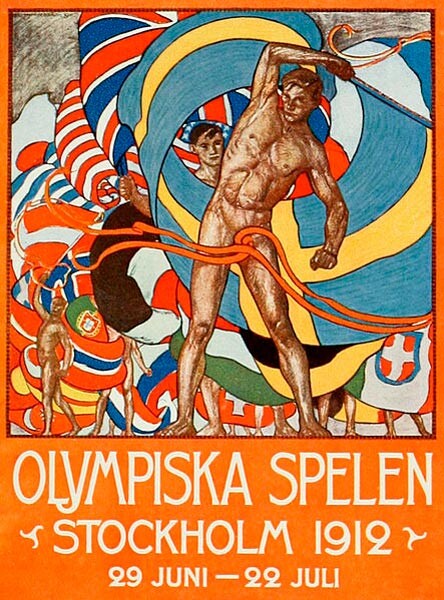 On 6 July 1912, the opening ceremony was held at the Stockholm Olympic Stadium built specially for the Games.The Swedish Royal Family attended the event and saw all the national teams marching throughout the stadium. 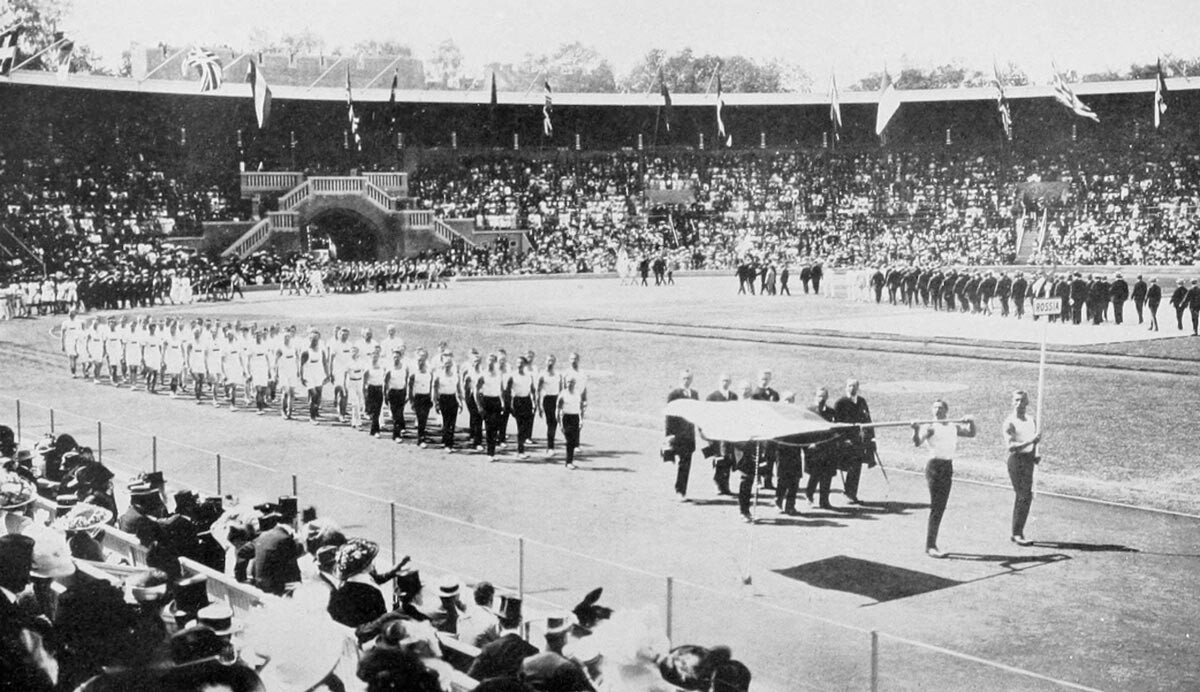 Russian athletes at the opening ceremony

The Russian team included 181 male athletes, many of whom were originally from St. Petersburg, as well as Estonia and the Baltic area of Livonia, then part of the Russian Empire. At the same time, Finland, being also a part of Russia, participated separately in the Games. 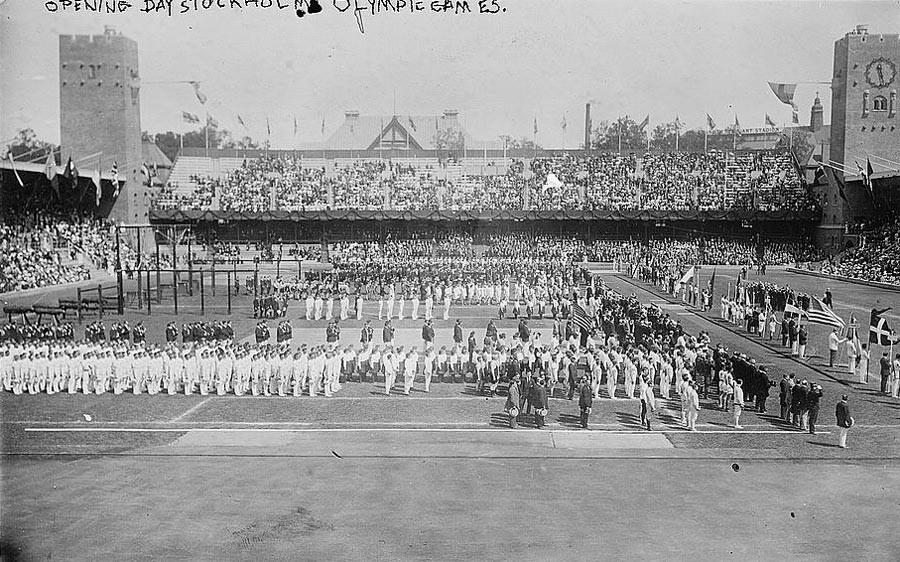 The team was headed by Grand Duke Dmitri Pavlovich of Russia, cousin of Nicholas II. The Prince himself took part in horse riding competitions at the Games, both individual and team jumping. (Later, he would be infamous for being a co-conspiritor in Grigory Rasputin’s murder). 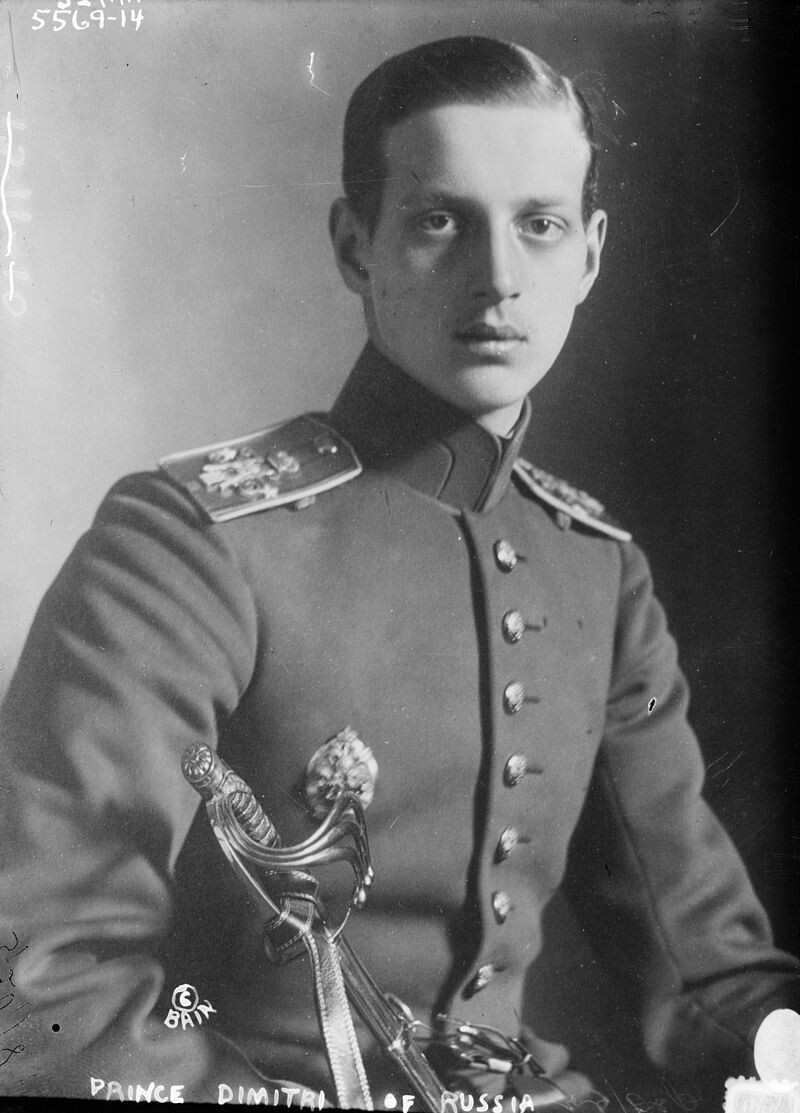 Team Russia didn’t perform very well at the Games, winning only five silver and bronze medals, but not a single gold. By the way, figure skating champion of the London Games, Nikolai Panin, participated as a shooter this time and only managed 8th place.

The Russian football (soccer) team (pictured below) ended up in 6th position, finishing the competition after losing 2:1 to Finland in the quarter-finals. After that, in the so-called ‘consolation tournament’, the Russian football team Russia suffered its worst ever defeat in history, losing 0:16 to Germany. 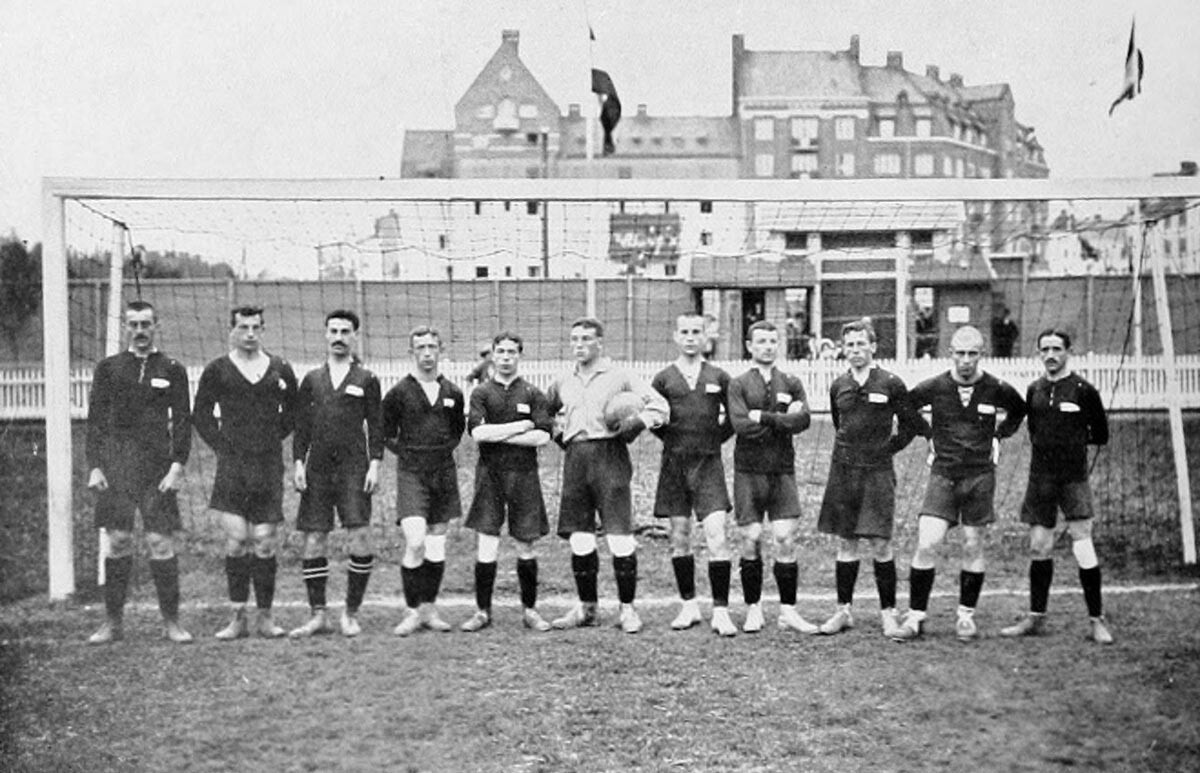 However, one episode of Team Russia in the 1912 Olympics was truly worth it! An Estonian wrestler named Martin Klein won a silver medal after holding out in the longest wrestling match ever recorded. He was fighting against reigning world champion, Finnish Alfred Asikainen, for a total of 11 hours and 40 minutes! 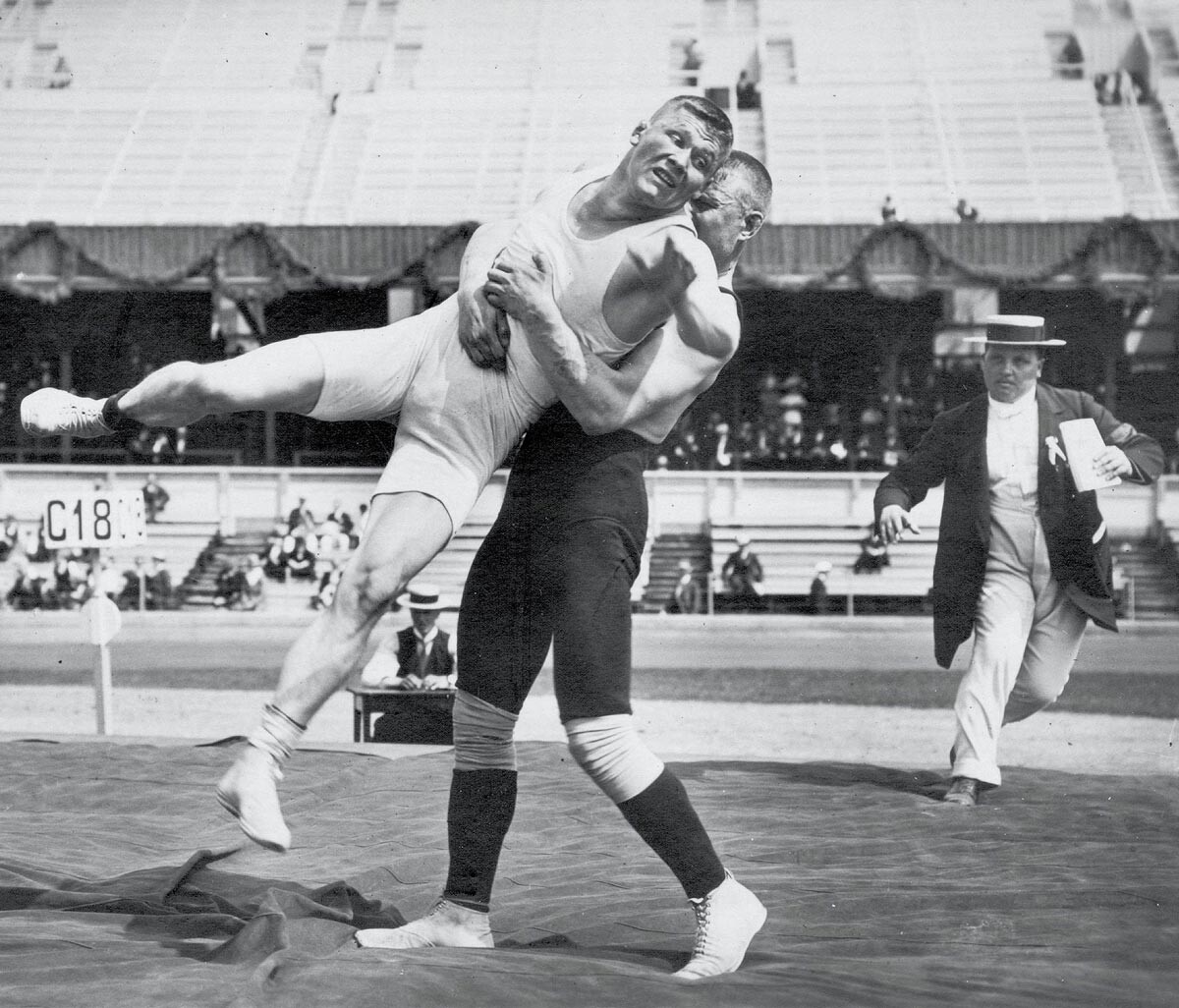 Martin Klein (in a white suit) vs. Alfred Asikainen

After such an exhausting performance, he couldn’t compete well the following day and lost the potential gold. Unlike other athletes of the Russian Empire, he kept his Olympic story: in 1919, he became a wrestling coach and prepared Estonian wrestlers for the 1920 Olympics.

The poor results of the Russian athletes didn’t satisfy Prince Dmitry and he had planned to arrange annual national competitions to prepare for future Olympic games… And two inner Russian Olympic Games were arranged the next two years, in 1913 in Kiev and in 1914 in Riga, both part of the Russian Empire back then. 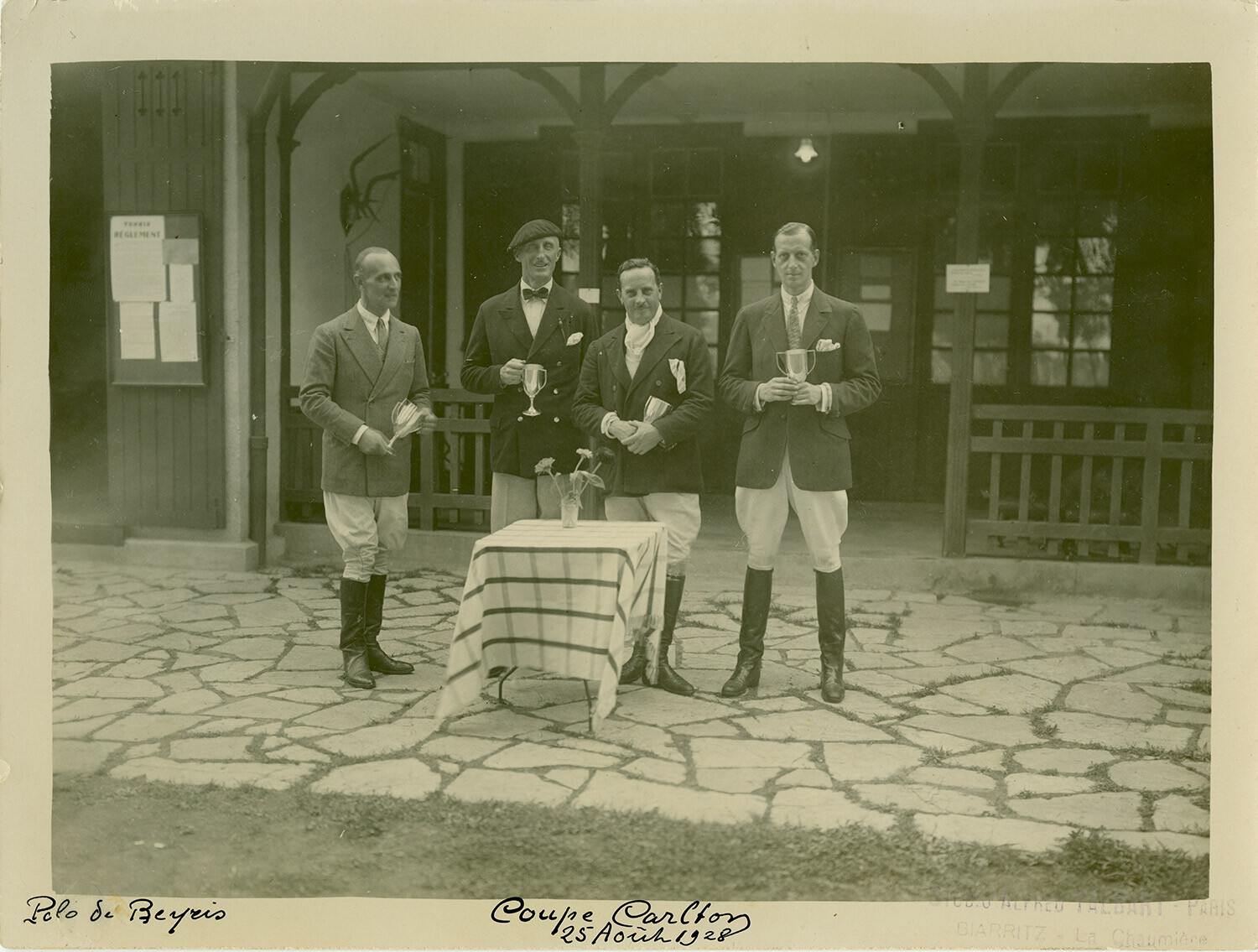 Then came World War I, which hampered all sport events. The next Olympic Games were held in 1920 in Antwerp, but Russia, caught in the Revolution and Civil War, wasn’t invited, as the world didn’t recognize the Bolsheviks’ power. The Soviet Union was formed in 1922 and, in its turn, decided not to participate in the “capitalist” sport competitions, arranging their own ‘Spartakiade’ for international workers and communists. The first time the USSR took part in the Olympic Games was after World War II - in 1952, Soviet athletes headed for the Helsinki Games.