Did you know that Russians invented the bike? Find out who rode it!

Lifestyle
Alexandra Guzeva
While in the West it’s somewhat common to find politicians or celebrities riding bikes, for Russians, it’s still an exception. Here is a list of 7 renowned Russian bike riders.

While cycling might be considered an attribute of hipsters in the West, in Russia, where it’s cold most of the year, biking was primarily a rural form of summertime entertainment and exercise for many years. Only in recent decades are bikes gaining popularity and becoming an everyday form of transport, while the number of bike paths continues to grow.

1. The first ever bike 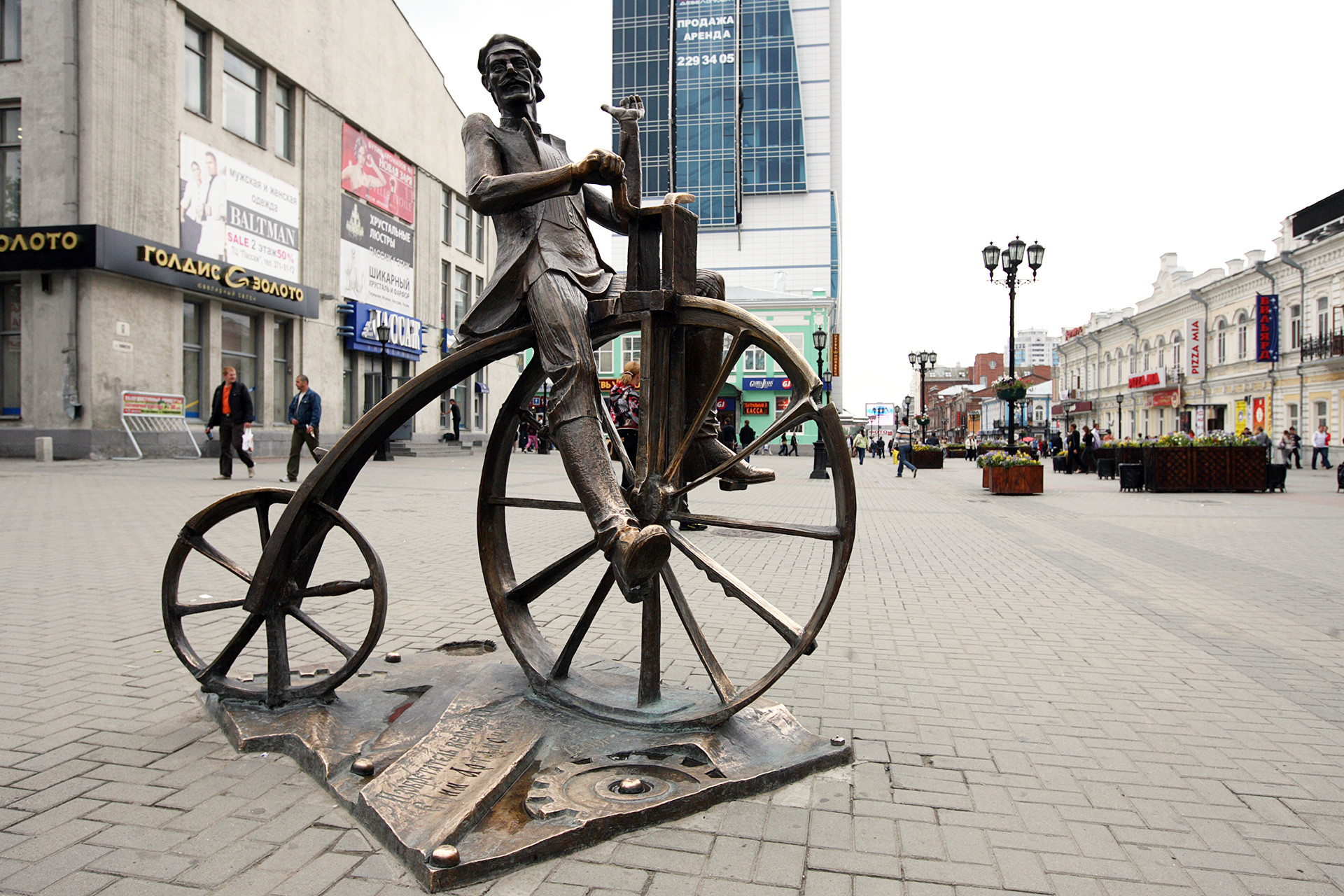 A monument to the bicycle inventor, Yefim Artamonov, Yekaterinburg.

There is a legend (or maybe it is real) that a Russian serf from Nizhny Tagil made the first bike and was sent by his master to St. Petersburg to surprise the tsar. To get there, he also completed the first bike race, which spanned 1600 kilometers. It is surprising that this man managed to do this race, as the construction of the bike was very uncomfortable – the seat was placed right above the wheel. Nonetheless, Emperor Alexander I was very impressed and granted the man freedom from serfdom. 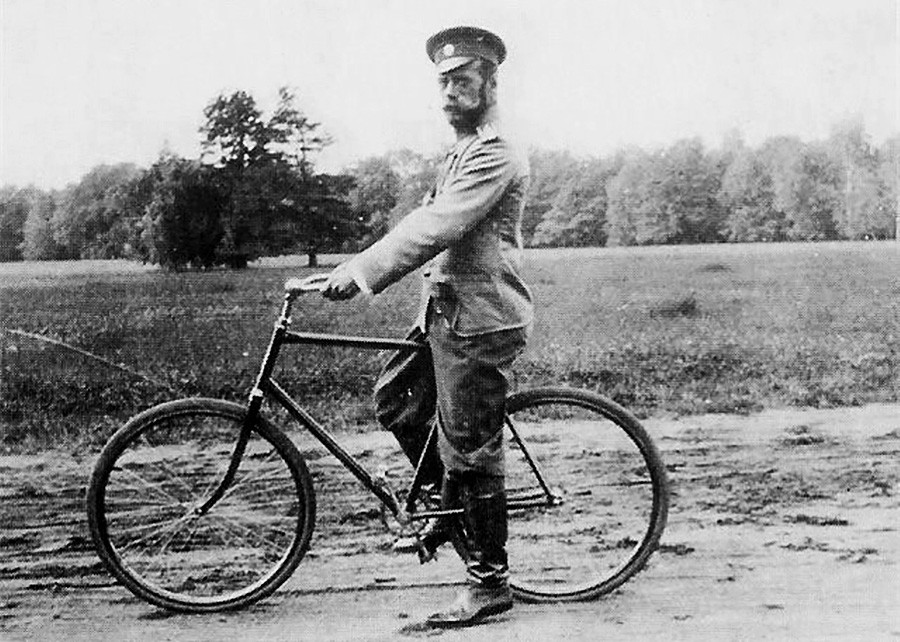 Members of the Romanov family were true fans of cycling. Alexander II used to bike at the Tsarskoye Selo residence near St. Petersburg. Meanwhile, his children shocked the guards when they rode through halls of the tsar’s palace after receiving their first bikes in the winter when they were unable to try them outside. Alexander’s II grandson Nicholas II was probably the most famous Romanov cyclist. 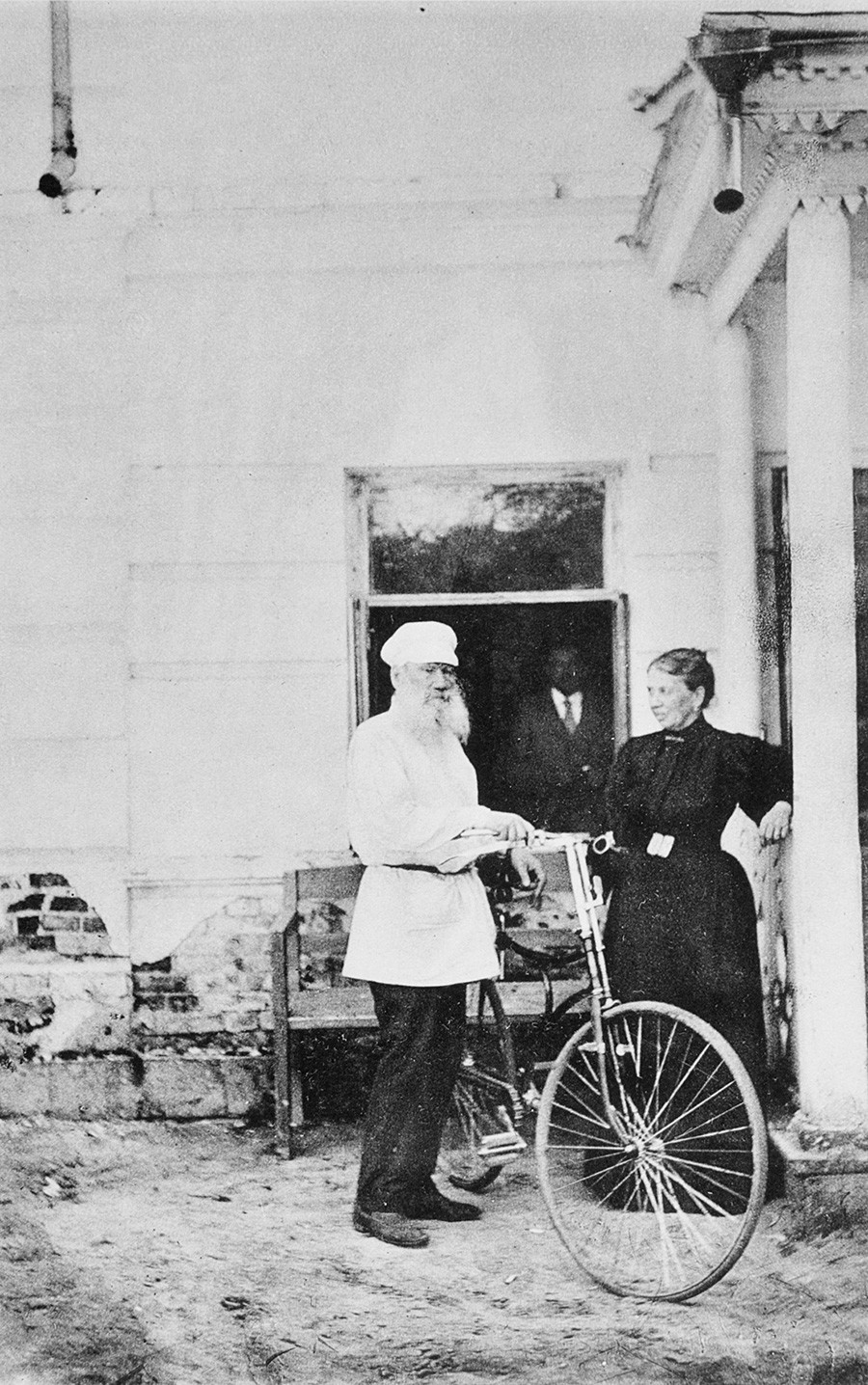 Leo Tolstoy and his wife Sofya Andreyevna in 1890s.

Leo Tolstoy was famous for his love of sports. His hobbies included taking long walks, doing gymnastics, swimming, horseback riding and jogging. So, it is not surprising that he was one of the first and, certainly one of the most well-known, Russian cyclists. In 1895, the Moscow Cyclist Society honored the writer with a truly lavish gift – a Rover bicycle. So, at the age of 67, he learned to ride a bike and taught his children as well. 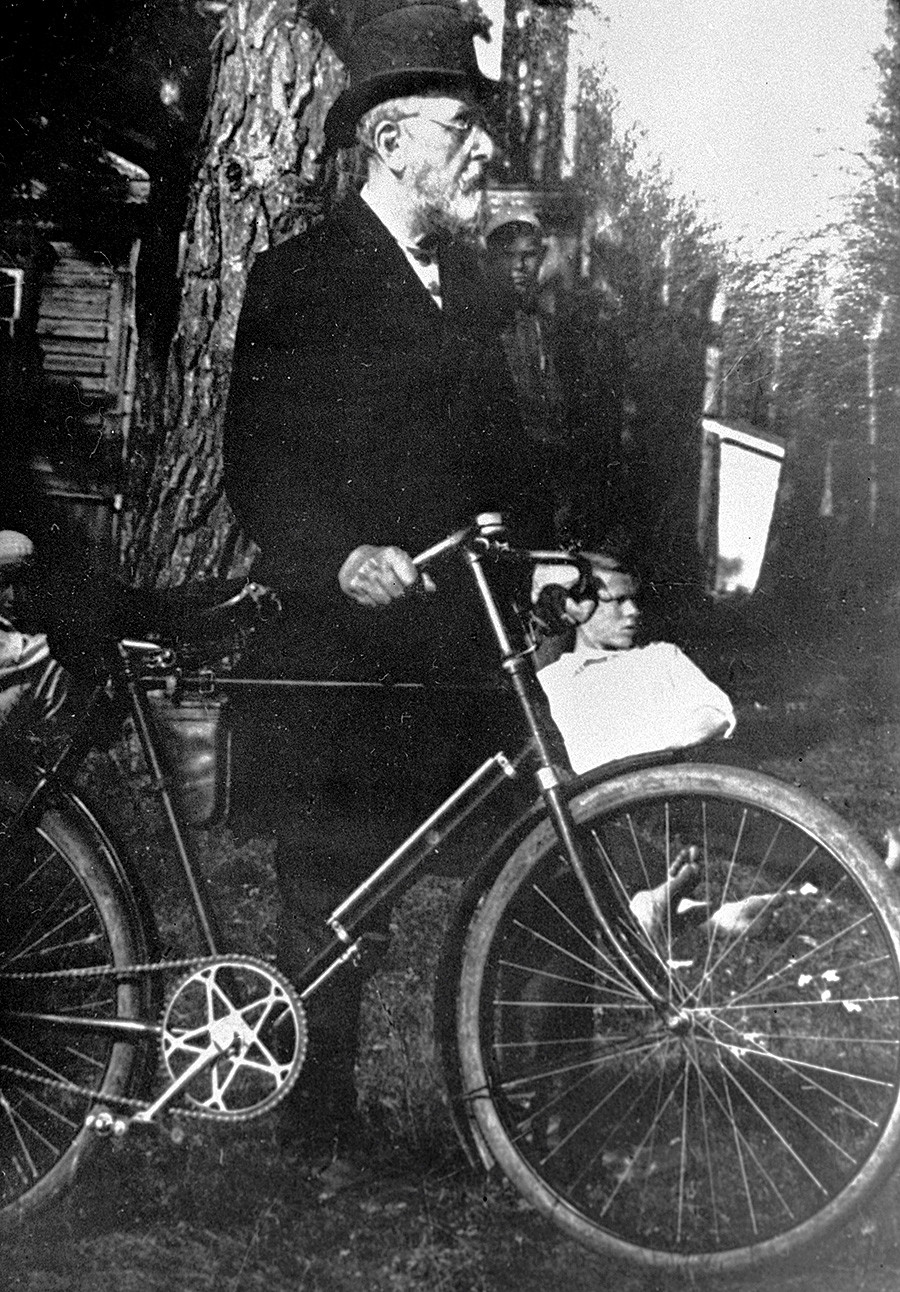 Another Russian, the genius, scientist, engineer and space-research pioneer Konstantin Tsiolkovsky also started riding a bike later in his life. The people in Tsiolkovsky’s hometown of Kaluga (200 kilometers southwest of Moscow) considered him to be a mad old man as they watched him quickly ride across the city towards his wooden house on the outskirts of town. Today, in the center of Kaluga there is a monument to Tsiolkovsky, who is depicted standing next to his bike and looking out at the sky. 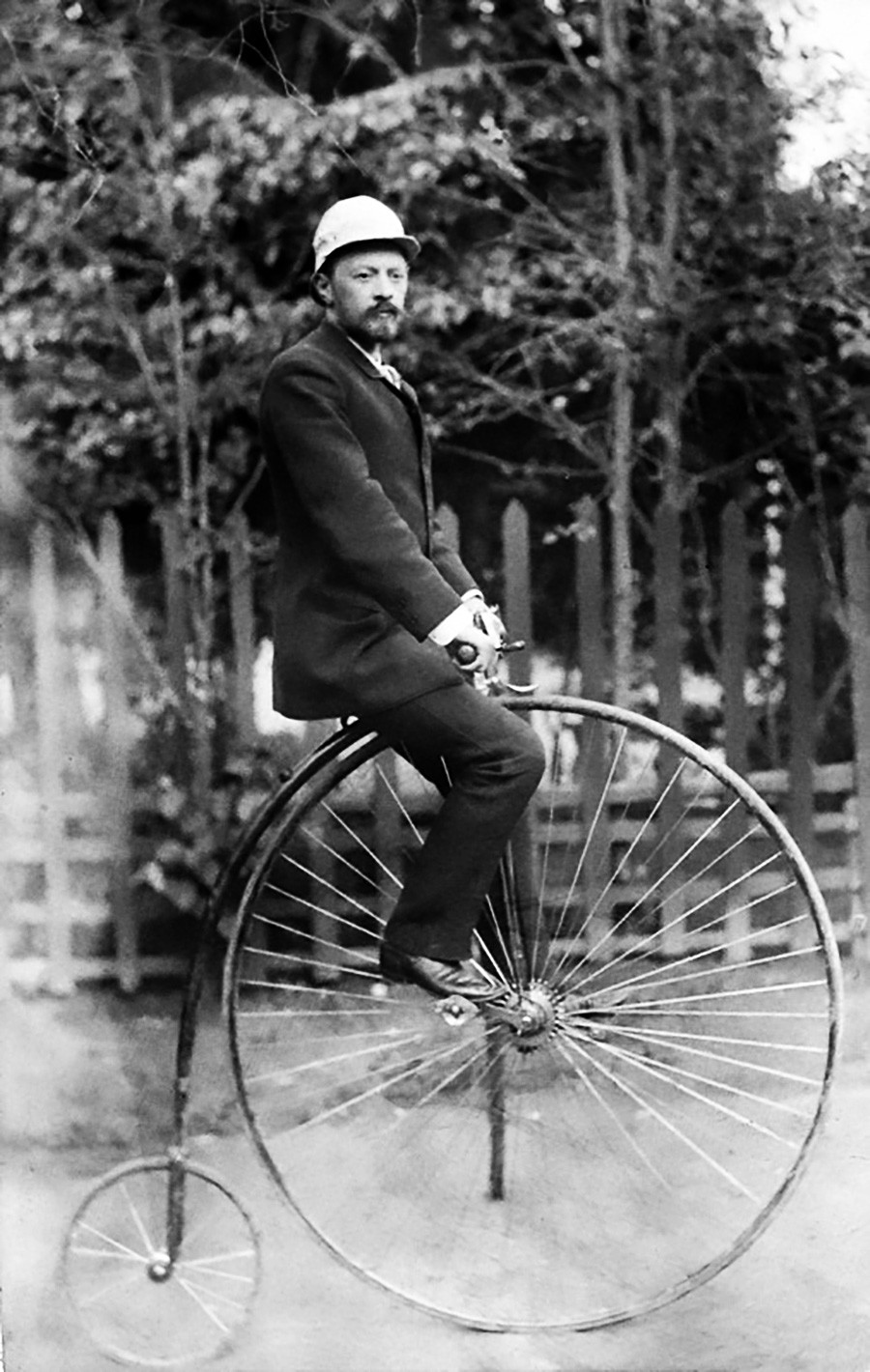 As the creator of the famous Shukhov Tower and dozens of other metallic constructions, Vladimir Shukhov was not only an innovative architect and engineer but also a cheerful man interested in opera, theater, chess and cycling. There is a story about how once the boss of the construction company where Shukhov worked, Alexander Bari, entered the Manege in Moscow to find a bicycle race taking place. People were gathered, screaming “Go, ginger, go!” and he watched the red-haired man win the race. When he looked around, Bari saw that the champion was, in fact, his most talented employee – Shukhov. 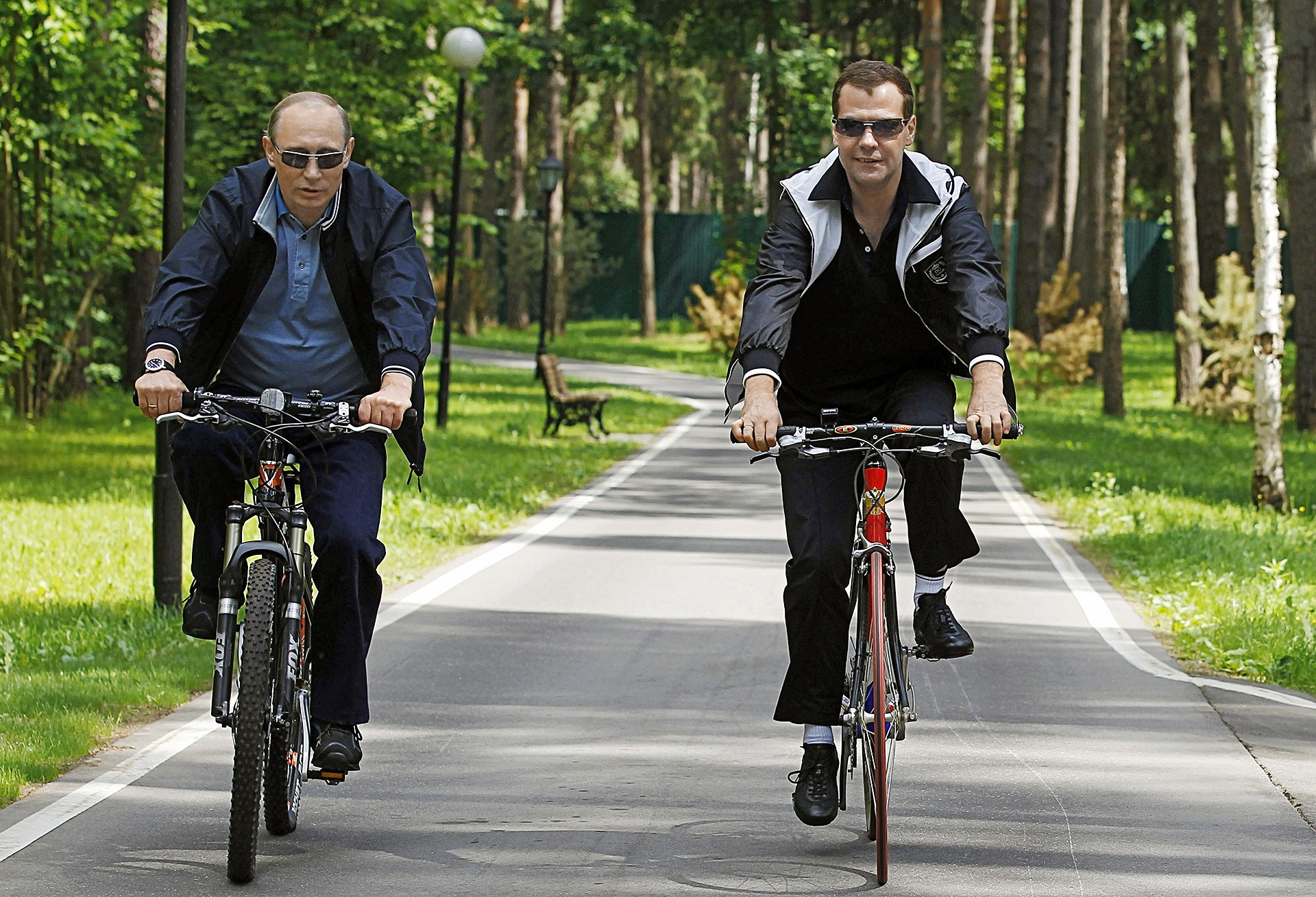 Russia’s president and prime minister like skiing and going to the gym much more than cycling. But still, they once made a spectacular public appearance during an informal meeting at Medvedev’s residence at Gorki 9 – and look how happy they are riding their bikes.