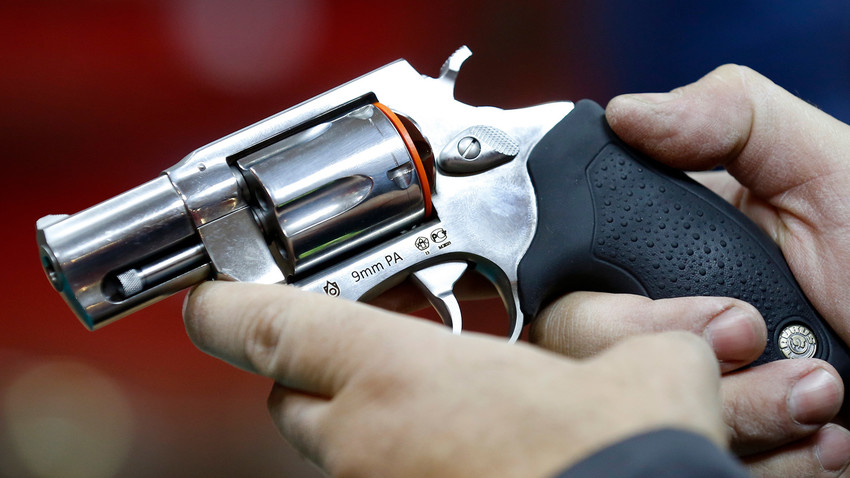 Valery Matytsin/TASS
A paralyzed athlete has brought new life to the deadly game of Russian roulette, replacing bullets with electric shocks. But why do people play the game?

Cutlery, martini glasses and napkins cover the table in a local cafe. There are also five revolvers lying in a row.

One every two weeks for the past two and a half years, residents of Perm (1,442 km from Moscow) gather to play this new form of Russian roulette. The basic rules are the same as in the classic version of the game: Players insert a single round into an empty revolver drum and then spin the drum. Then they take turns pointing the revolver at their temple and pulling the trigger. But there is a twist. 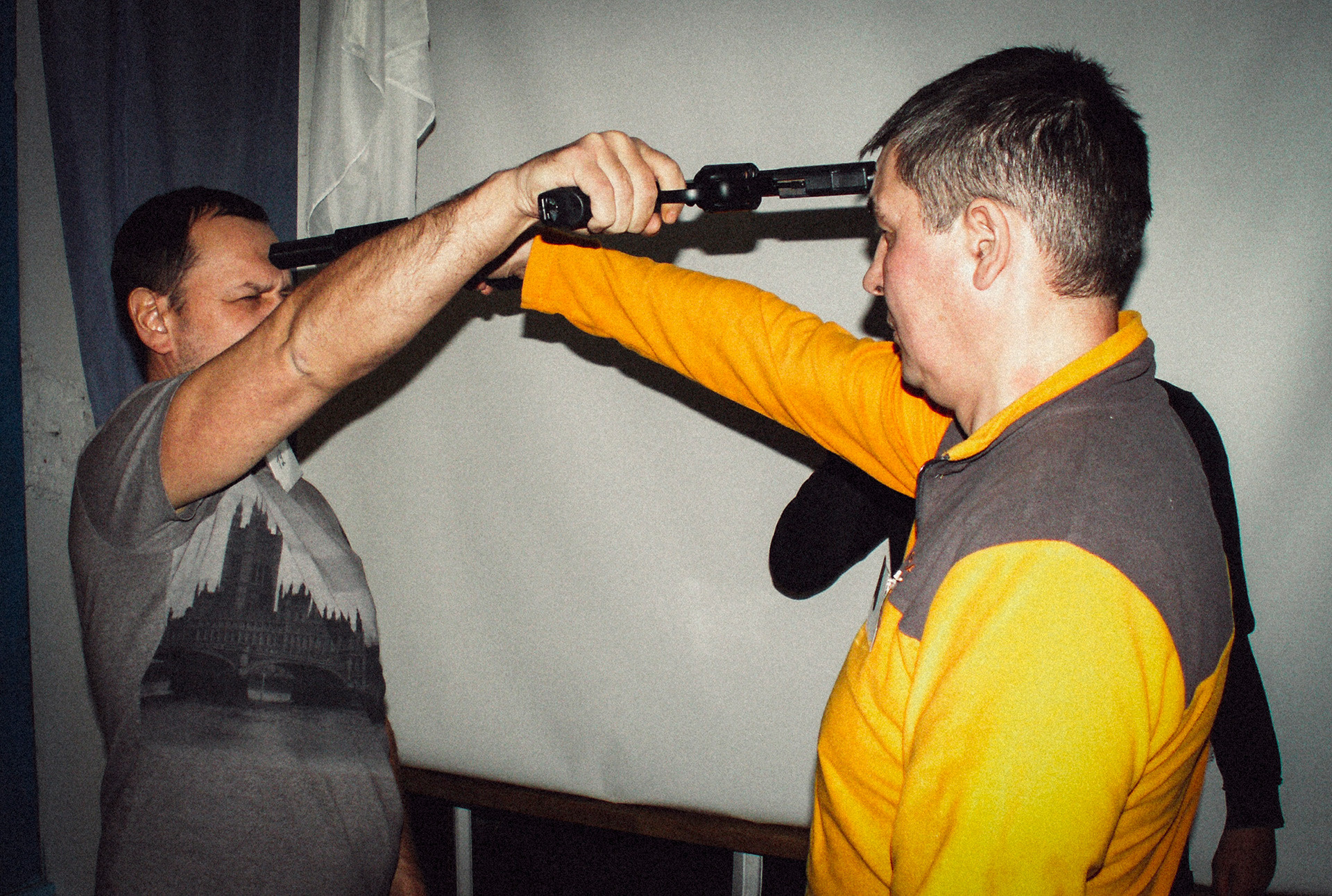 Valery Eshchenko, a mixed martial arts master, came up with the idea of creating rounds that emit an electric shock. According to Eshchenko, these are unpleasant, and upon one feels a strong tingling and the muscles that were hit begin to twitch. The goal of the game is to not show it when you have been unlucky enough to get a shock. The player with the most endurance or the most luck is declared the winner.

High levels of tension could be felt not only in the revolvers but also throughout the entire room. In the game, names and nicknames are not allowed and instead each player is assigned a number. During the first stage of the game, players shoot the back of the head of the player in front of them. Each revolver has two live rounds and four blanks. Players count down from three, and then the guns click simultaneously. 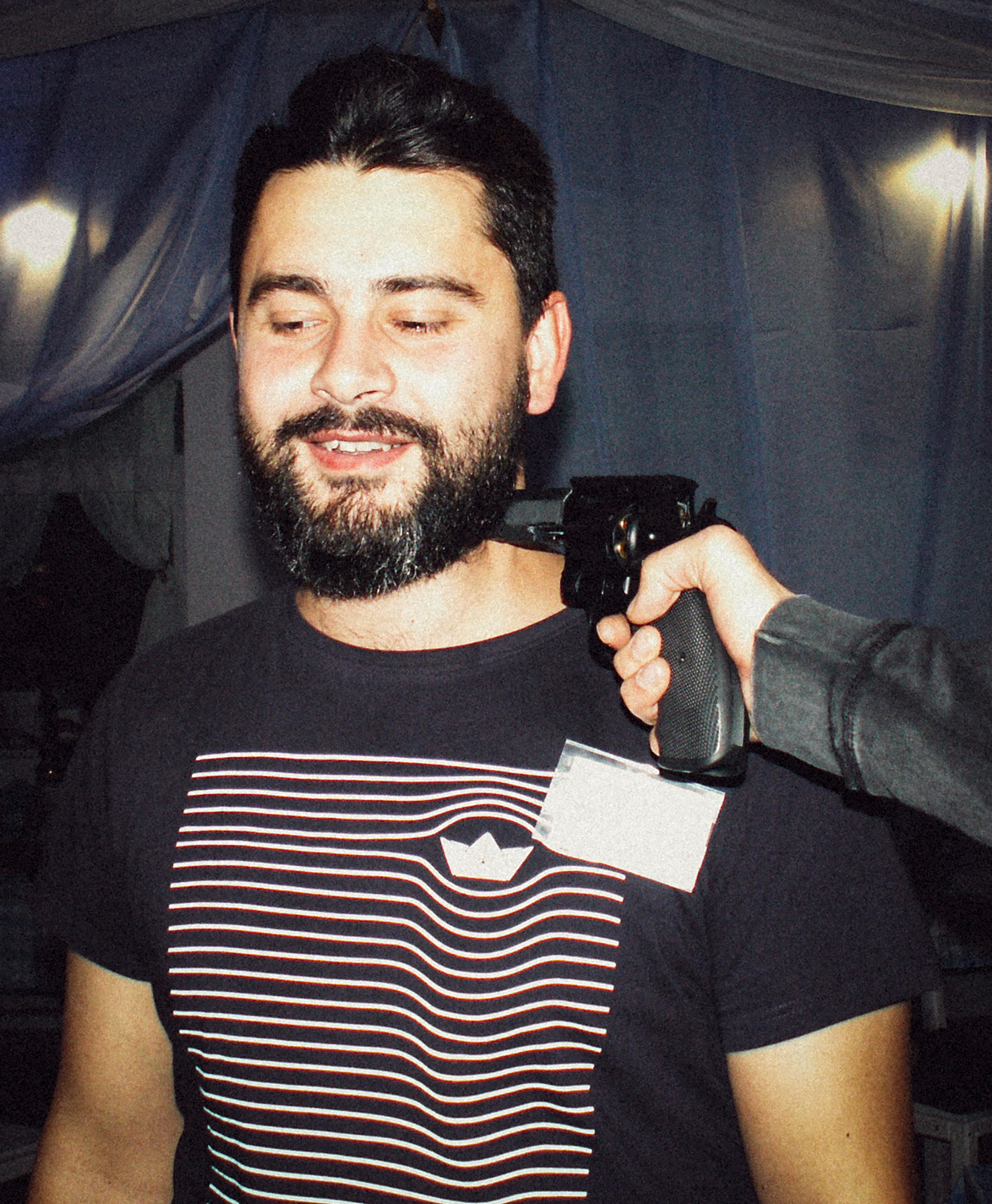 "Everyone is alive," the moderator announces joyously. The drums are spun again, followed by another countdown and more clicks. The process is repeated five times until the neck of one player starts twitching. It turns out that the loser with the twitching neck had actually been unlucky in the previous four rounds, having been "killed" each time by a live round.

According to Yakov Kharisov, who has participated in the game eight times, the hardest moment is not the shot but the countdown leading up to it.

"At that moment you have an adrenaline rush, trying to guess if you are going to be hit. You are thinking about how to control yourself. Sometimes your nerves let you down, and you are shaken more by an empty round than by the live one," Kharisov says. He adds that the intensity of the electric shock has been increased as of late, and it is now more difficult to control oneself.

"I also want to kill a man," a young girl cried out during stage, which is called "Love Triangle." 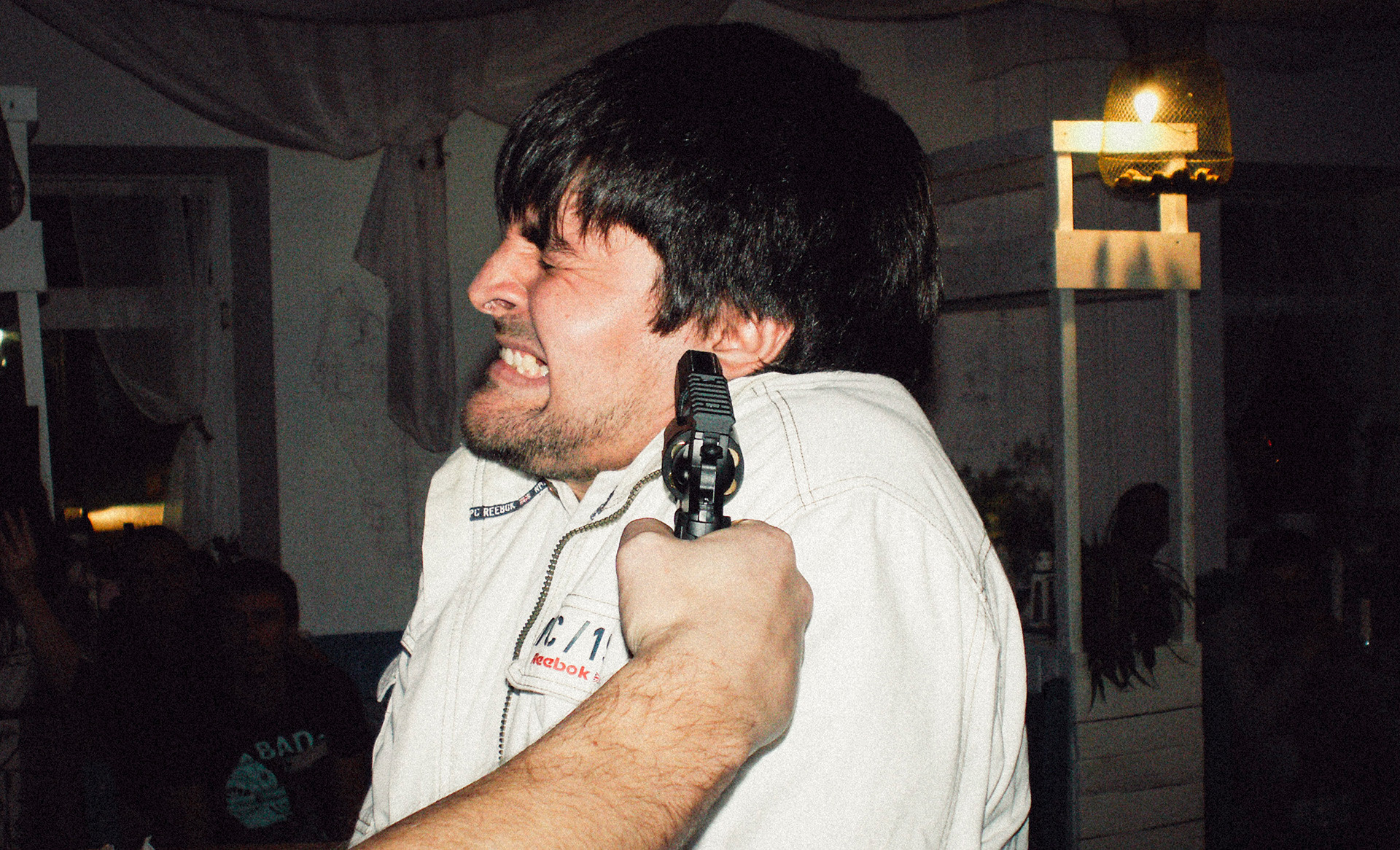 Two men and a woman stand in a triangle. Each shoots at the player to their right. Almost immediately, the love triangle is broken by the "death" of the girl. She convulses, clasps her neck, lets out a startled “argh” and leaves the game.

Ekaterina Abyzova argues that the worst is a shot to the area around the carotid artery, which causes your neck muscles contract. She says it is easier to bluff when you are shot in the arm or the forehead.

According to Eshchenko, after being shot a player feels a small shock that is followed by a feeling of elation.

"After the game, you feel like after a 10 km run,” he says. “You are absolutely exhausted, but you feel proud of each ‘concealed wound.’ Our Russian roulette is almost like a sports game." 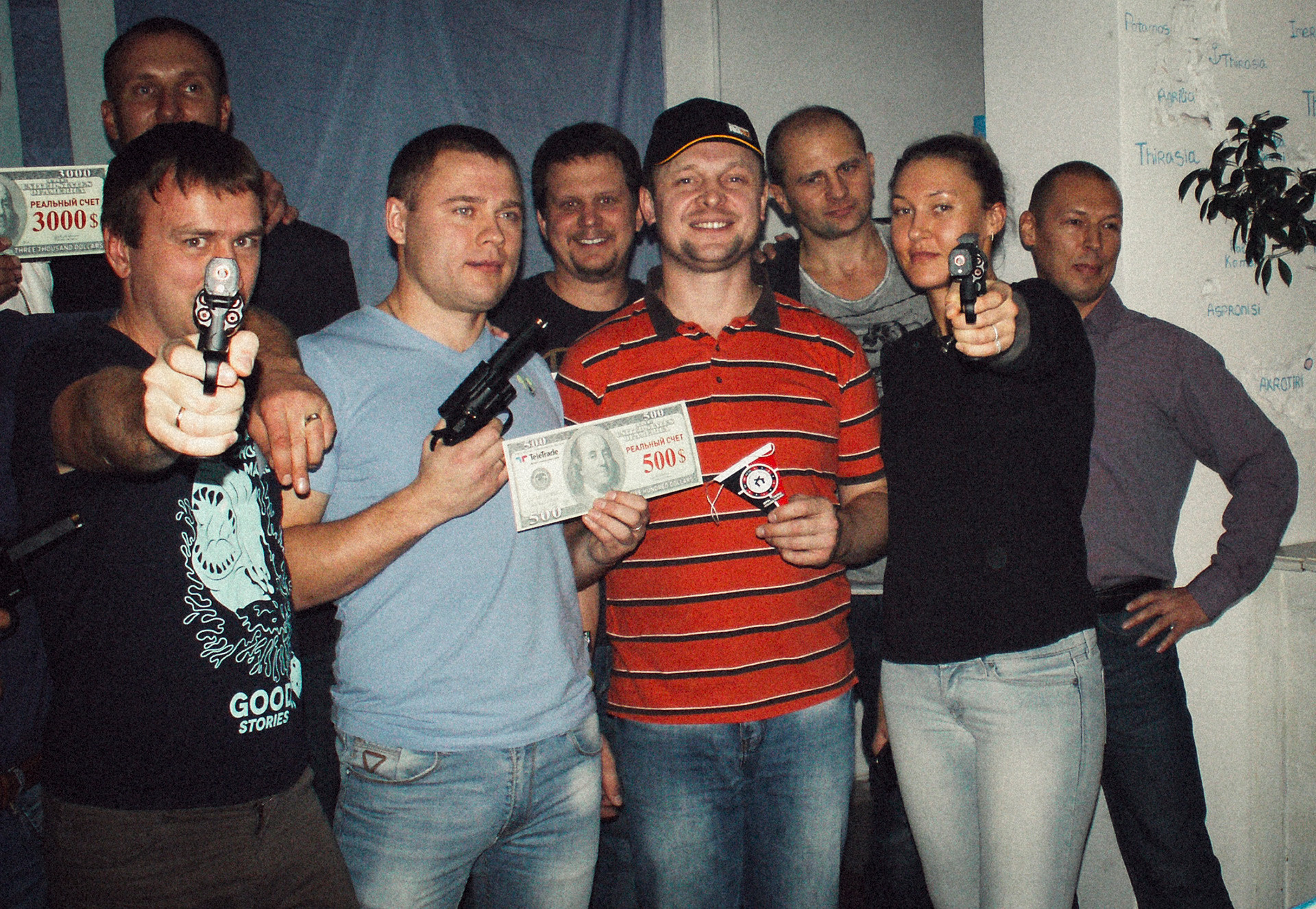 Eshchenko is a survivor of both a long coma and paralysis, after which he was unable to find a job as a mixed martial arts coach. Recalling that period of his life, Eshchenko says, "Essentially nobody cared about me. Once I fell on the floor and lay there for two hours before they picked me up."

He says electroshocks finally helped him overcome paralysis. Admittedly, his fingers and toes remain stiff, and his voice is husky as if he has the flu. These are consequences of the coma.

"At first I would ask acquaintances to give me an electroshock,” he says. “Then I was able to press the right buttons myself. All the muscles gradually recovered. I was apparently causing myself pain, but the sensation was different. They were electric shocks but they were also a jolt in a positive sense. So I started thinking of how to give people a ‘jolt’ randomly.”

The idea for the game came to him while watching Thirteen, a film in which the main character tries to get rich by playing Russian roulette. Eshchenko started making bets with a local bookmaker and had some success. He took the money he won and, with the help of an engineer friend, made and patented his first revolvers.

"It is a unique weapon of its kind. It is neither an air gun nor a revolver nor a stun gun since it produces an electric current of only 0.1 to 0.3 volts. Our weapon is just a toy for adults," Eshchenko says.

The first game was held six months later at a local sports hall but has since moved to a cafe. As a rule, about twenty people take part each time. The fee for participants around and entrance is free for spectators.

But Eshchenko primarily makes money from selling the revolvers.

"One revolver costs $650,” he says. “People buy the revolvers and play the game in other Russian cities—Voronezh, Irkutsk, Noyabrsk and Moscow. I watch them closely to make sure the rules are observed. I have also patented the game, so I can ban it at any time."

The prize for first place is an account on the stock exchange and gifts from sponsors. Playing for money is not allowed since gambling is prohibited in Russia. Eshchenko is currently planning a TV show based on the game, which he hopes to film abroad and then turn into a licensed game of chance.

"My dream is for spectators to be able to place bets on so that they can make money too,” he says. “I have received telephone calls from India, and people from Moscow have asked to go into partnership with me, but all of them have disappeared. It is difficult to realize the idea since not everyone appreciates the game, although it is cooler than racing but causes no harm to health." 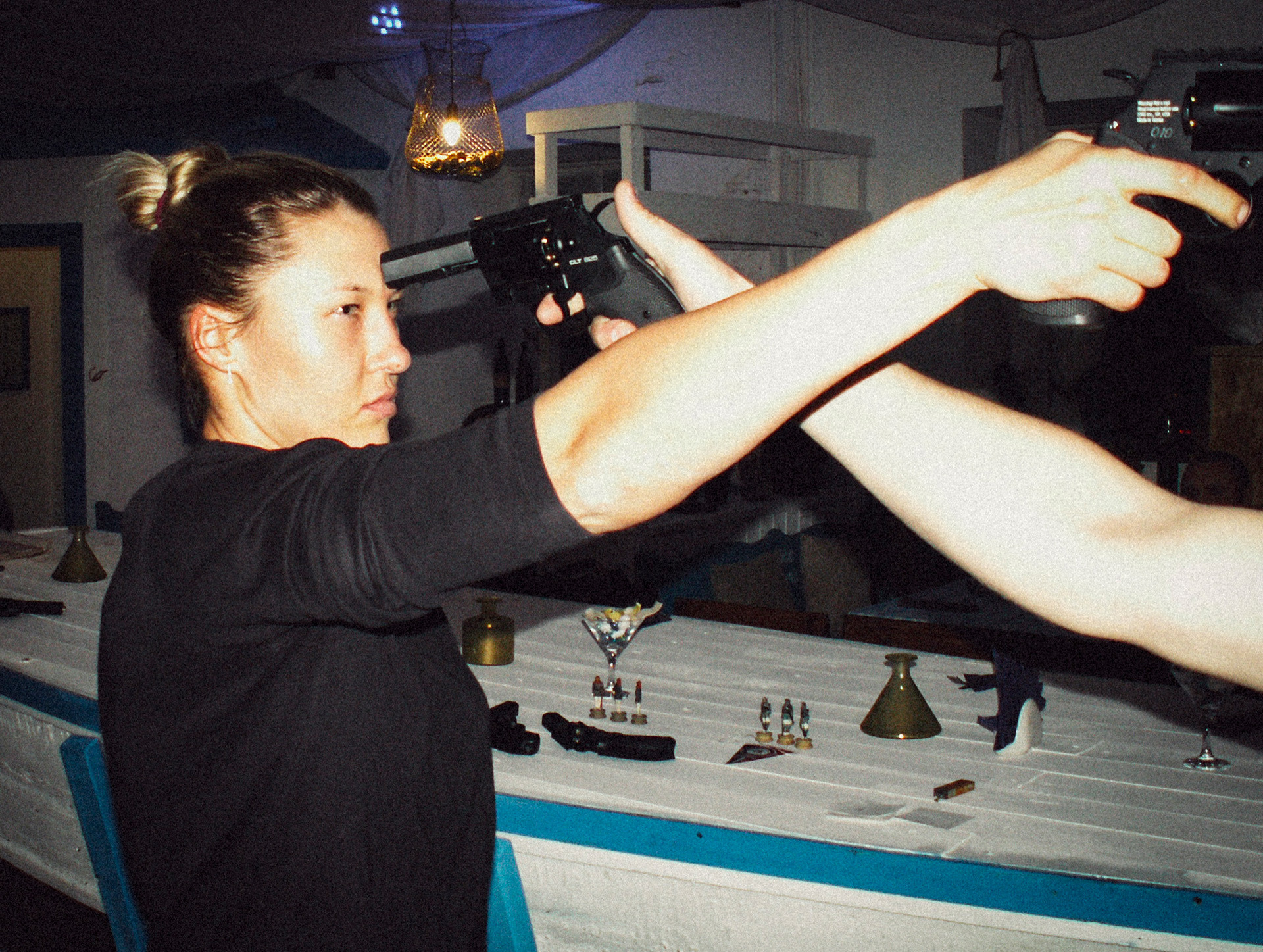 girl assigned the number 10 gives herself away by screaming after being shot.

"If your neighbors behind the wall are screaming, it means they are playing Russian roulette," the moderator jokes.

"I am amazed how unlucky I am sometimes,” Abyzova says. “I’ve had a live round each time, and you can't do anything about it. You just stand there and endure the pain. I definitely should not play real Russian roulette."

Yakov Kharisov finds the shots much easier to take. He left the but found he missed the adrenaline. For him taking part in the game is all about the desire to win and "feeling that you are better than the others."

Eshchenko claims that it is not just current and former athletes who play, but also people from other professions. "All sorts of people come here. Despite the fact that they cause themselves pain, after the game they leave in a happy mood and with positive thoughts," he says.

Oleg Ivanov, a psychologist and conflict specialist who heads the Center for Settlement of Social Conflicts, believes that this new form of Russian roulette is nothing more than the "latest fashion in how to tickle one's nerves."

"For many people, fear has become a way of dealing with stress,” he says. “The same thing could explain the craving for horror quests: Staged attacks by zombies, ghosts or evil demons. There are many such forms of entertainment.”

Psychologist Ekaterina Fedorova disagrees. She says the desire to take part in such a game could be prompted by a masochistic complex.

"The mechanism of the complex is simple,” she says. “The body reacts to physical pain by producing endorphin, a happiness hormone. At the subconscious level, the pain is enhanced by the subsequent euphoria. Essentially it is self-medication."

In her opinion, the desire to cause oneself pain is not a sign of a mental disorder and does not lead to suicidal thoughts. "But a person must be unhappy about something in their life if they resort to this kind of 'medication,’” she adds.