Are Russians ready to separate their garbage? 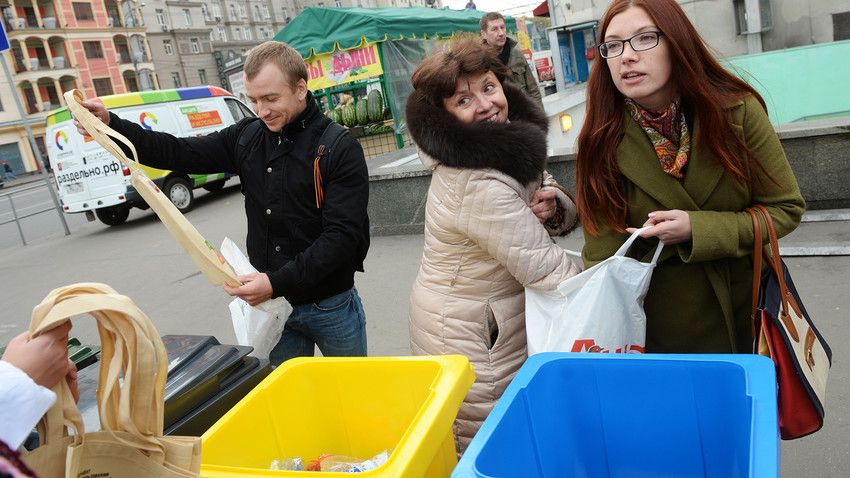 Kirill Kallinikov/Sputnik
Protests in the Moscow Region against a massive dump raise questions about the future of recycling in Russia.

The issue of waste sorting and recycling is not taken seriously in Russia; mixing a banana peel and a plastic bottle seems to be no big deal! However, the problems caused by a lack of attention to recycling are much more important than at first glance.

Over the past several weeks, the city of Volokolamsk near Moscow has seen protests against a nearby garbage dump, with residents complaining about the unbearable smell from the landfill. Until the middle of 2010, only local garbage was transported here, but its capacity has increased 10 times. In 2013, there were 39 such landfills in the Moscow Region, but most were closed, some after complaints from locals. Now there are 15 landfills in the region, and it’s promised that they will be reclaimed by 2026 in order to reduce the negative impact on the environment, according to Russian media. But what to do with the garbage? 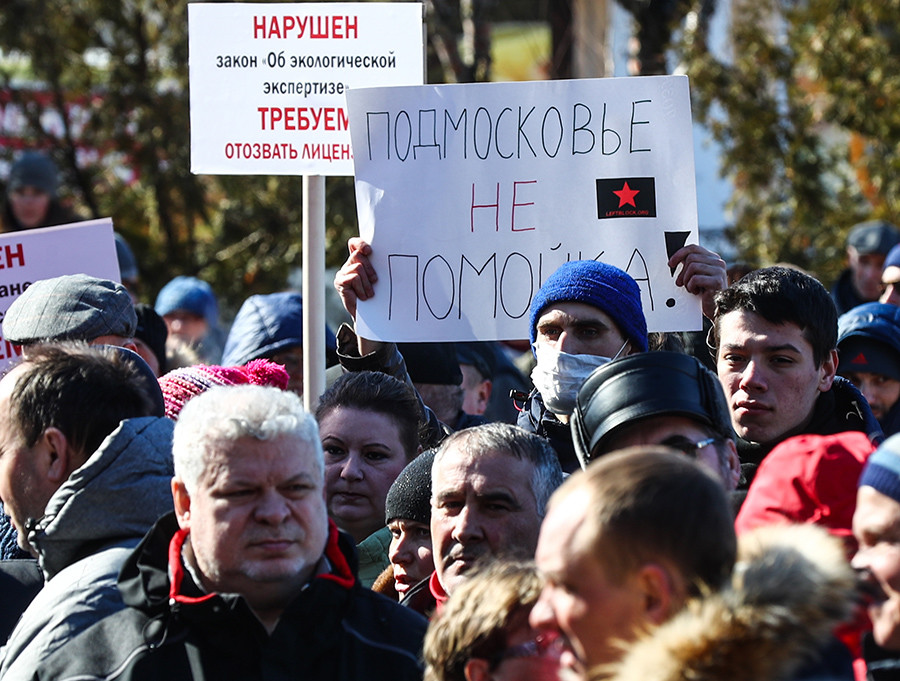 People take part in a protest demanding the closure of the Yadrovo solid waste landfill in Volokolamsk, Moscow Region.

Ecologists estimate that the volume of garbage in major Russian cities is growing every year, and in three years all current landfills in Russia might reach capacity. In many countries waste separation and recycling have long been the norm, but in most waste is dumped into landfills or incinerated. According to Russian media, citing the Natural Resources Ministry, in 2016 only nine percent of solid waste dumped in landfills was recycled, and another 2.4 percent of garbage was destroyed at incineration plants. 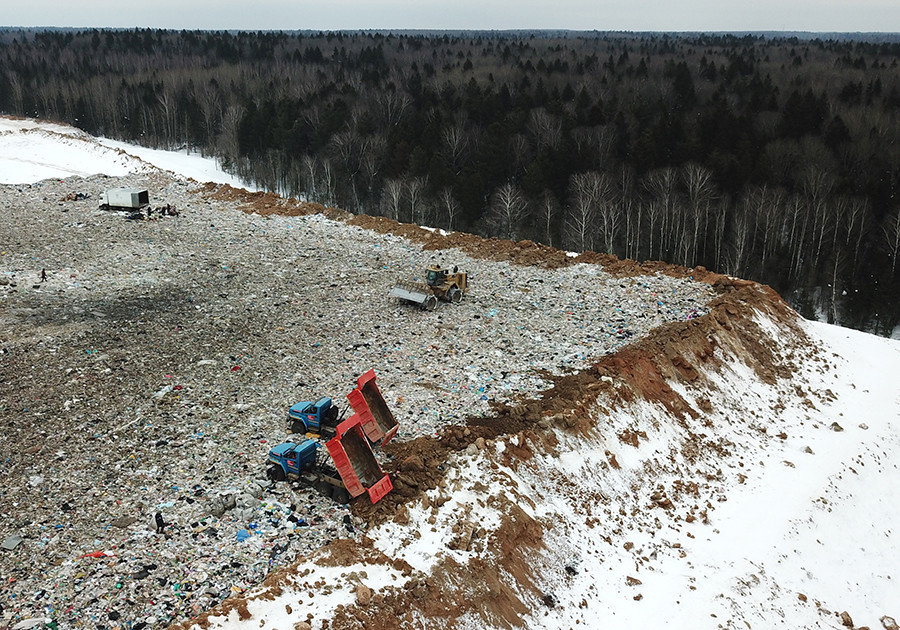 Employees of the Yadrovo solid waste dumping grounds in the Moscow Region put soil on the grounds to neutralize unpleasant smells.

At the end of 2017, President Vladimir Putin signed a law on the separation of waste, which obliges regional authorities to coordinate the location of garbage dumps with residents, as well as to set up sorting stations and to determine what waste to recycle. The law is taking full force in 2019. Even today, however, in some areas of the Moscow Region separate waste containers are installed for recycling (paper, plastic glass) and for organic waste.

Currently, there are several recycling enterprises near Moscow, and in 2018 the first project for the processing of organic waste will be launched. In addition, volunteer organizations help to collect garbage for recycling in different cities (for example, here). But the culture of recycling depends not only on the authorities. Are Russian citizens ready to sort their garbage to help the environment?

"If we want to be a civilized country, we should rationally manage environmental issues," says Olga Ruzanova from Moscow, who works as a marketing manager. "I separate waste when there are special containers, but so far there are few."

"It’s a good idea to separate and recycle garbage, but it should be organized by the state. You should be able to throw out the trash with several different containers available for sorting. But we don’t have this," says Moscow blogger Daria Sokolova. "For example, you can bring used batteries to IKEA, which is far from where I live. So, should I hold on to them for months? I don’t; being green requires much time and effort. When this will be possible without much effort, then I’ll be happy to do so. 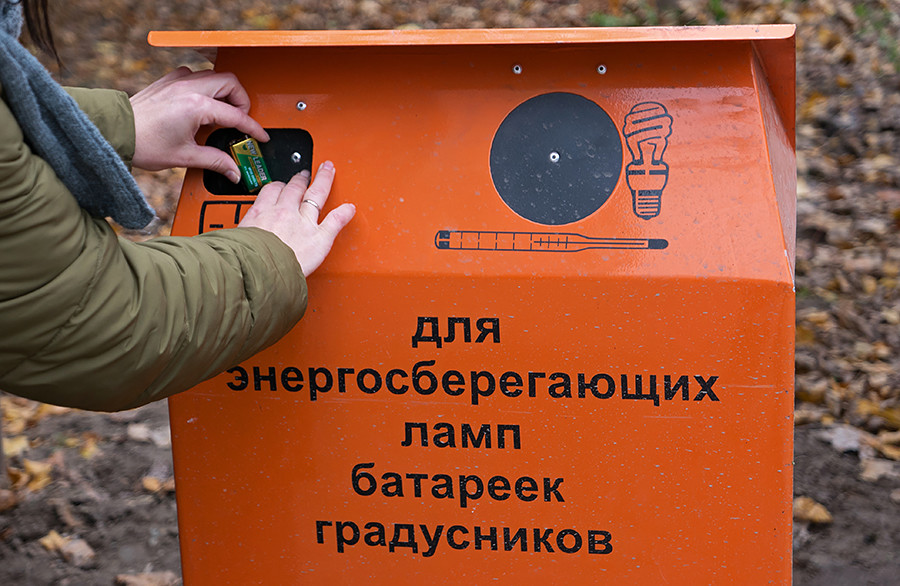 A resident of the Mytischi town, Moscow Region, throws a battery in a disposal box for energy-saving light bulbs, batteries and thermometers.

I know that in landfills the garbage is usually sorted manually, and at the very least they select metals or items that can be recycled," says Maria Kozhevnikova, a PR manager in Moscow. "In fact, you just need to go further: automate the sorting, and apply it to all types of garbage. At the very least, organic waste can be disposed of without polluting the environment."

"I only throw away batteries and energy-saving lamps into special containers," Maria adds. "Many times I've seen a garbage truck drive up to separate containers for collecting glass, plastic and food waste, and then mix up the heap."

"I think sorting and recycling are great, but many people expect something from the state, and they do not want to change anything," says Moscow designer Victoria Chimakadze. "Here's another problem – garbage at the dacha where there are no garbage containers. So, many people leave the trash in a nearby wood. Many Muscovites don’t see garbage because it’s outside the city. It's a disaster."

"I collect paper, glass, metal and plastic bottles, and take them to recycling stations every 1-4 months," says Elena Bobrova, a journalist and tourist guide in St. Petersburg. "Of course, a waste separation system is necessary. But you realize it only when you start sorting yourself. You won’t believe that one person can leave so many plastic bottles! The system will work only if the state will have a program to popularize sorting. But before that, we need at least to educate people not to litter. Unfortunately, it seems that we need to start with this. 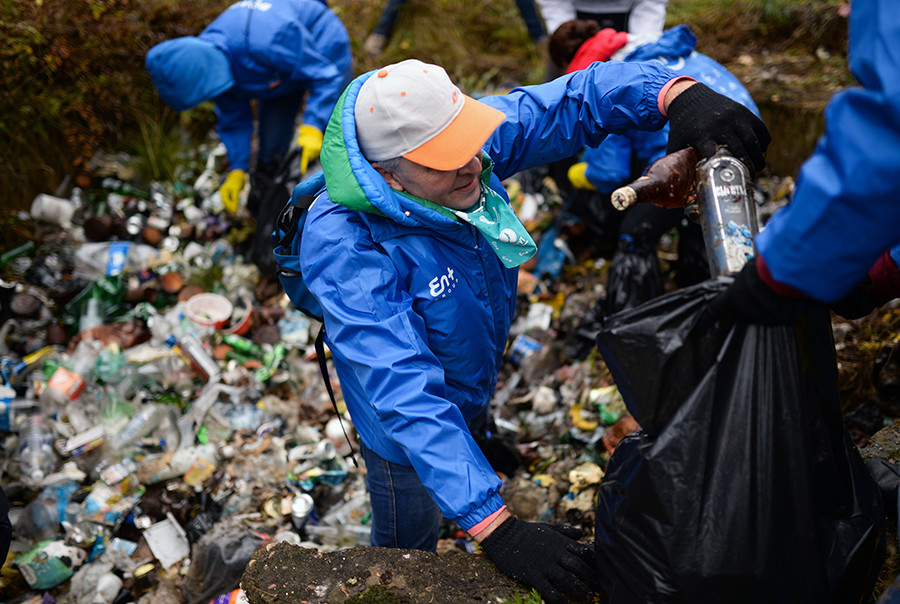 Volunteers collect garbage on the shore of the Lake Baikal at the Murino settlement.

You can change the situation in the country by starting with yourself; there’s no other way," says Tamara Grigorieva, a teacher in Moscow. "It is possible to increase personal responsibility, to instruct children and to discuss with friends: why it’s important not to throw cigarette butts on the ground, what to do with plastic bags, and so on.”

"Many years ago in they also didn’t separate waste, but now a new generation has grown up: they don’t know any other way, and they’ve learned to care for the environment, people and animals. I also wish that we had time for this. Today, you can find a place where to hand in used batteries, and we do this in my family. Also, you can go to the store with a fabric handbag, and when there will be containers for different types of garbage we will sort it. Fortunately, the international experience of recycling is applicable to Russia," Tamara believes.

"By the way, in Cairo, there is a city of scavengers: thousands of people sort garbage manually, receiving money for it. They understand that it’s necessary. In Norway and Sweden, if I’m not mistaken, there is a shortage of garbage: it’s all processed into energy. Sometimes there’s not enough and the waste is imported from neighboring countries. I think this is very inspiring."