Surprised by Russia: Steven Seagal is friends with Putin and loves caviar 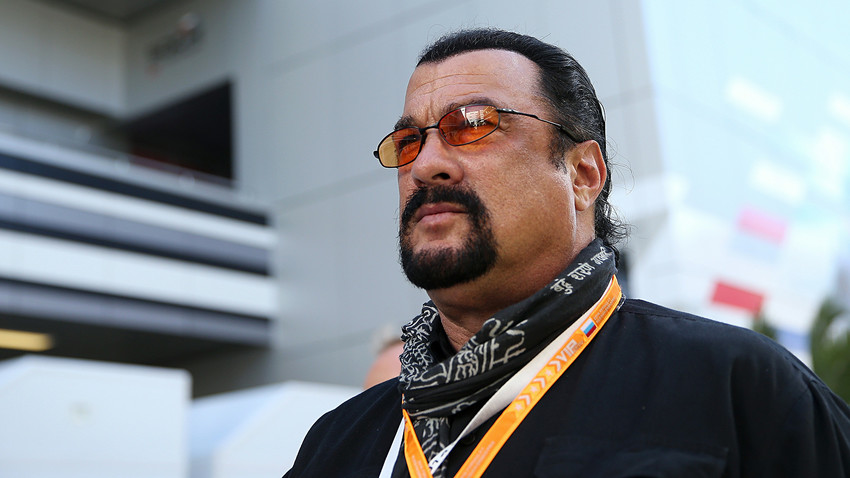 Getty Images
As a famous American actor and martial arts expert Steven Seagal needs no introduction. Best known for his action movies of the 1990s, today he often makes headlines for his visits to Russia. He calls himself a friend of Putin, and has been cited as an informal intermediary between the Russian and American governments.

Steven Seagal considers himself Russian. “I can say that I am Russian. I’ve got Russian family. I love Russia and I am proud of it,” he said back in 2014. Seagal claims he has Russian roots and that there’s blood in his veins from Russia’s east. “My father’s family is from Vladivostok.” And since 2016 he can prove his ‘Russianness’ with a Russian passport granted personally by President Vladimir Putin.

When pressed in an interview by a persistent Russian journalist asking for more details about the actor’s affection for Russia, Seagal hit back hard like a true fighter: “Some people like Africa, some like Mexico, some like fluorescent color. … I simply like Russia and I am not afraid to talk about it. There are also other countries I like. I like Japan, and there’s no reason to be ashamed of this. Nobody will say in Japan: ‘He has come here because he wants something here.’ People who say so are simply idiots.” 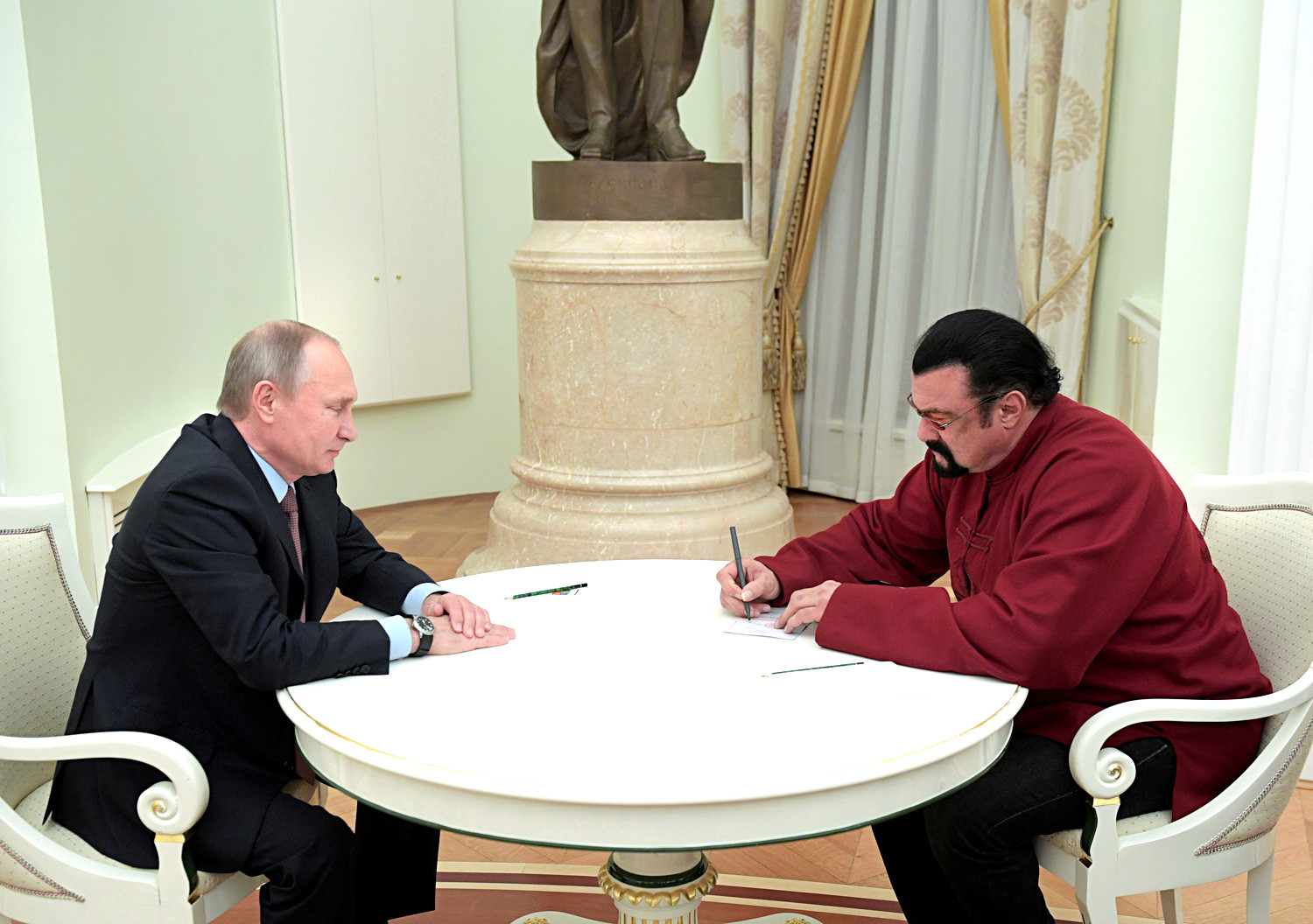 Steven Seagal signs a Russian passport received from Russia's President Vladimir Putin during a meeting at the Kremlin in Moscow, November 25, 2016

“It is pretty obvious that my love for Russia is not just [because of] the beautiful geography, the beautiful landscape or the beautiful architecture. In it has to do with the fact that Russians are one of the greatest nations on the planet,” the actor said. It seems that the affection towards Russia also partly owes to his warm feelings toward Russian cuisine. “I hate to say this but I love caviar. I love pelmeni. I love shashlik and I love .”

In a few Seagal mentioned that he had business projects in Russia. For example, there was of making a movie about Genghis Khan. Also, he appeared in the commercials of a Russian mobile phone company, utilizing his image as a tough guy. 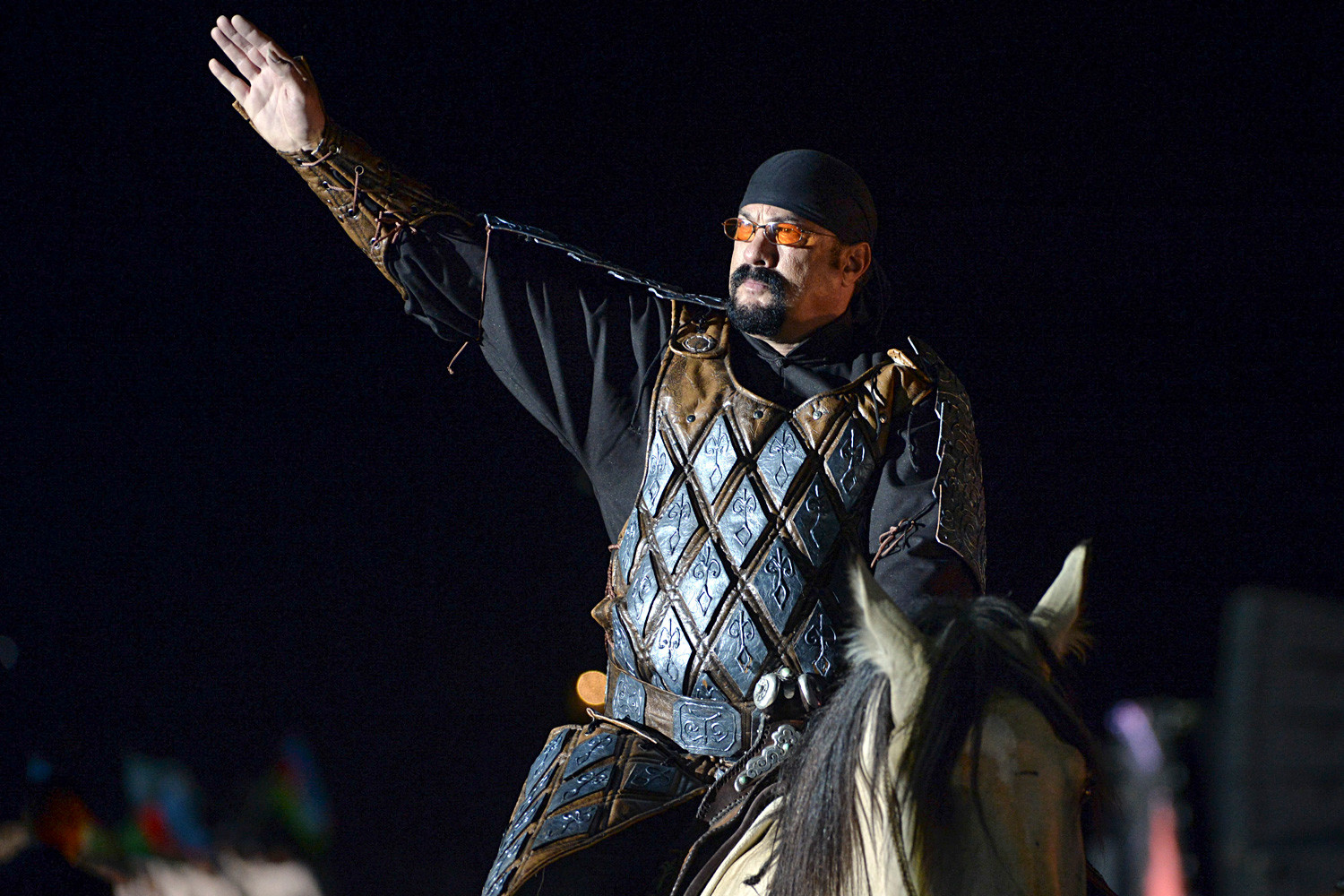 According to media reports, Seagal considered making in Russia a movie about Genghis Khan

In one commercial, set in winter, thugs accost Seagal who wears a fur hat and fur coat. Before they can even finish making their threats, he stops them and says through the online translator: “Tender snow crunches under the feet like the bones of my enemies.”

“Guys, he is one of us,” they say and retreat. The commercial was made soon after Seagal got his Russian citizenship.

In another commercial Seagal is stuck in a traffic jam and responds to a rude driver, who wants to cut him off, by saying a famous phrase from a popular Soviet comedy: “I will hit you neatly, but strongly.”

Seagal is a big fan of Putin. “I consider him to be my friend and I’d like him to be my brother. I think he is a decent man, a man of his word, and what is very important for me is that unlike the majority of world leaders he does not think about himself and about his image, but rather, he is concerned with his country and its people,” Seagal said in interview in 2014.

In another he said that “he admires Putin as a great leader,” recalling the situation in Russia in the late 1980s and in the 1990s.

“I was in Russia when there was no food and money, and simple people suffered and died. … I saw as Russia was falling apart, and I saw as Vladimir Putin took a country that was in catastrophic conditions and made a country with a great economy where there is almost no unemployment. Russians are a prosperous nation; people live well here. And this is Putin’s achievement. It would be hard for any other head of state to achieve such results, and that is why I love Russia.”

The close relationship between the two was again demonstrated in September 2015 when Putin and Seagal visited an oceanarium under construction in Vladivostok. There was also a high-ranking Chinese official there, and Putin introduced him to Seagal, saying “Here is our friend, the deputy prime minister of China.” 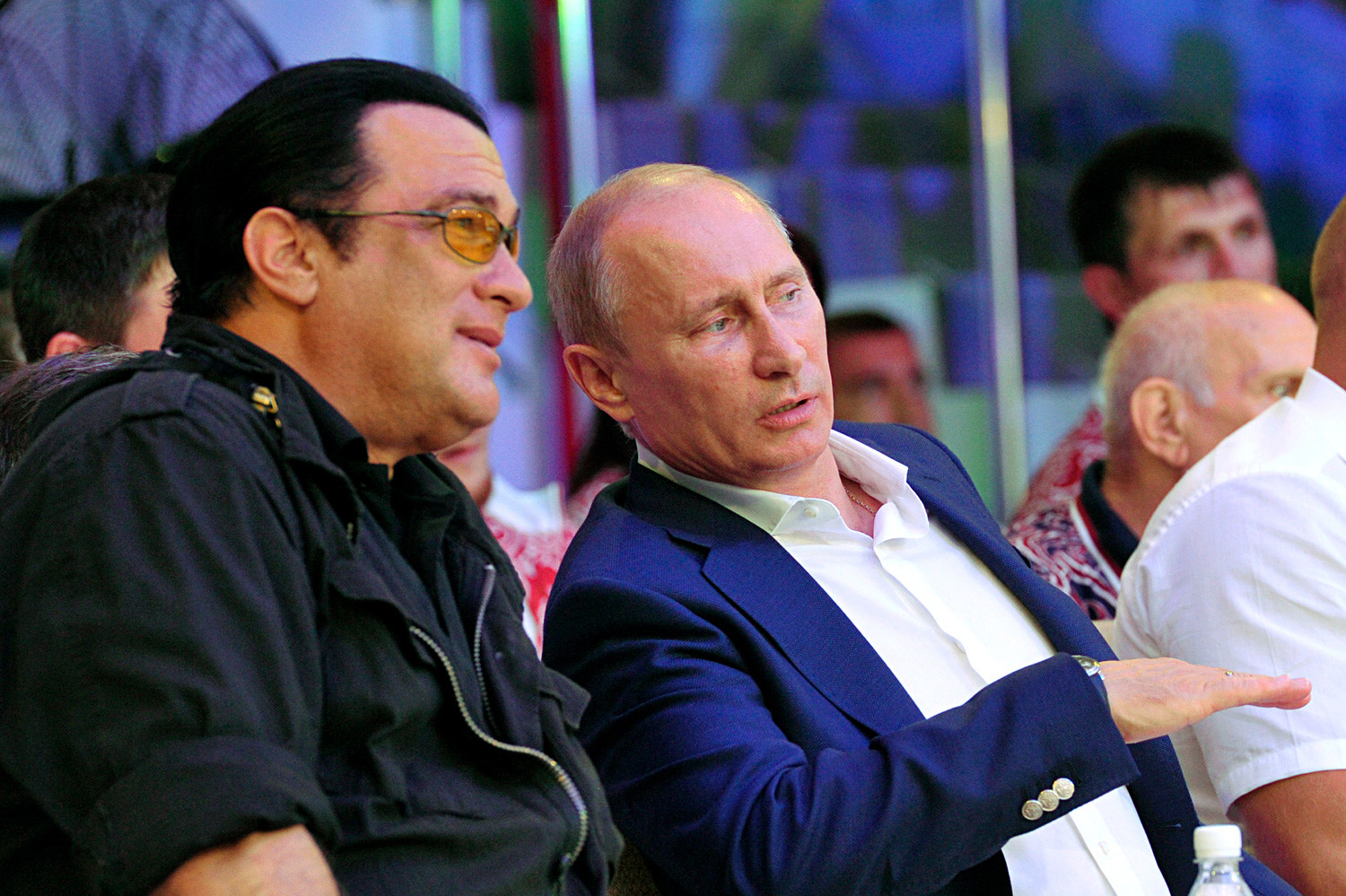 It is not known whether the actor has also become a friend of the Chinese official, but it seems he is on good terms with Russian deputy prime minister, Dmitry Rogozin, who is in charge of the defense and space industries. At least the official invites the actor for events in Russia, and the latest example of this was Seagal’s visit to the Museum of Space Exploration in Moscow that happened a few days ago.

There were rumors in 2015 that Moscow wanted to appoint Seagal an honorary Russian consul in California and Arizona, “and thus a potential intermediary between the White House and the Kremlin.” According to Buzzfeed, President Barack Obama was “stunned” by the offer, but there was never any official confirmation of that report.

If that incident did take place then most certainly Seagal wouldn't care much about Obama’s negative reaction because the actor doesn't shy away from the Boogie Man reputation. At least that was the title of the song that he recorded with one Russian singer – Boogie Man.