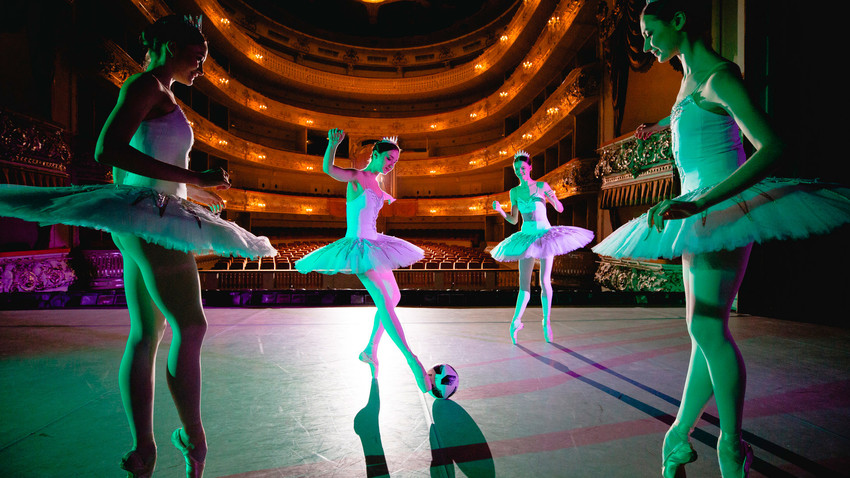 RT
Stealing the World Cup? Playing football with babushkas? Using Neymar Jr. as inspiration to overcome bullies? If these ads don’t give you World Cup fever, nothing will.

It’s that time again. Every four years, the most unthinkable things happen: Football brings the globe to a standstill, stars careers’ are made and broken, and you get to use sitting in your pajamas to watch Greece vs Nigeria as a legitimate excuse not to do anything.

We absolutely cannot wait – not least because this time around, the world’s biggest stage will be set in Russia. In case you needed any more reasons to be hyped for this summer’s footballing festivities, the pick of this year’s pre-tournament ads will surely get you in the mood.

This one is SO GOOD.

Beats have a history of memorable ads, most notably with Kendrick Lamar and Conor McGregor. Now with Guy Ritchie on board for directing duties, they’ve turned out one of the most memorable ads in recent times ahead of this year’s World Cup.

The clip begins and ends in the humble Moscow suburbs, telling the story of Andrei (the alleged “future of Russian football”). Having run into some mean looking gopniks, Andrei finds himself in a spot of trouble – luckily, he finds his way out in the form of rags-to-riches footballing superstars Harry Kane, Neymar Jr., Benjamin Mendy, and “German kid, I mean Turkish kid, I mean German-Turkish-Muslim kid” Mesut Özil. Using them as inspiration, Andrei sinks a satisfying free in the top corner past the embarrassed gopniks and embarks on his journey to stardom. Have that.

Made complete with Ritchie’s trademark sarcastic hypeman antics and Anderson.Paak banger ‘Bubblin’, it’s like you yourself are stepping out ringside into the action. If this doesn’t get you in World Cup mode, I don’t know what will.

How many stars can you fit in one 90-second commercial? A lot, it seems.

This neon-tinted cage-football ad features Lionel Messi, Mohammed Salah, Dele Alli, Jesse Lingard, Roberto Firmino, Paul Pogba, and David Beckham (to name a few), and if that wasn’t enough for you, there’s also Stormzy, A$AP Ferg, and Pharrell Williams there for moral and acoustic support. They’re doing what they do best – rapping, playing football, that sort of thing. The lights are pretty, and however vague they may seem, Ferg’s words of motivation kind of make you want to jump on a football pitch looking as stylish as possible.

This is your classic now-or-never, overly-dramatic football ad, essentially doing the same job the Champions League music will do for Russian World Cup viewers this summer.

Above all, it’s showcasing the host nation itself. The clip starts with birds chirping at sunrise over the Bolshoi Theater, and continues to liken the professional endeavors of the footballers to those of Russian’s finest ballerinas – perhaps a bit of a reach, but a nonetheless passionate display of what the World Cup means to all involved.

Flaunting Russia’s stunning cathedrals over the backdrop of intense string music and crying fans, the ad concludes by channeling the spirit of Stalingrad with a sunset shot of the Mamaev Kurgan monument. The stage has been set, boys and girls.

On a lighter note than Stalingrad, this ad is a jokey, KGB-themed thriller about stealing the World Cup trophy. Seems stupid, but it actually happened once (the cup was then rescued by a dog named Pickles).

Anyway, in this ad, a police announcement (in Russian) that the World Cup has been stolen sends shockwaves through the globe, leaving us to decipher which one of Cafu, Diego Maradona, Stefan Effenburg, and Vincente del Bosque did the dirty. Our money’s on Maradona – there’s just something about him.

The Kremlin view is fantastic, while the Cold War vibe is pretty theatrical. Let’s hope the real-life police are a bit better prepared than these ones though (so far so good, anyway).

Bud have gone a bit creepy for this one.

In this dark, gloomy ad, we are shown a world in which our taste for beer is satisfied in an instant by anthropomorphized drones. Is this a utopia or dystopia? At least, the fans don’t seem to mind. Anyway, Budweiser clearly didn’t get the memo about drones and alcohol being banned within the stadiums – keep up, guys.

As the drones fly through Moscow, they are naturally met with strange looks on the metro (God only knows why a drone would need to take the metro), and even manage to chat up some Russian women.

As weird as all this sounds (and assuredly, it is weird), there’s something about the dystopian aesthetic that makes Moscow look amazing. Check out the final shot of the Luzhniki Stadium, for example, with Moscow State University looming large in the background – that’s exactly what the World Cup final will look like. If the players aren’t getting goosebumps on their way to the ground, we certainly will be.

Are the first three minutes of this promo compilation Russia’s answer to the Trainspotting opening scene? They just might be. It’s got it all – namely, a boy running somewhere with an acute, generation-defining sense of purpose to the backdrop of euphoric dance music.

Impressively, the boy (named Sasha) manages to dribble all through Russia with a ball, on the way encountering babushkas, nomadic tribesmen, beachside ravers, ballerinas, on-stage rockers, and diners on the Trans-Siberian Express. It’s cheesy and undeniably vintage noughties material – they even predicted the final to be a 1-1 draw between Russia and Italy (the on-pitch outlook didn’t seem so dire for both teams back in 2010).

Nonetheless, it’s an emotional and nostalgic watch. And eight years later, the hour is finally upon us. World Cup 2018, we’re ready for you.