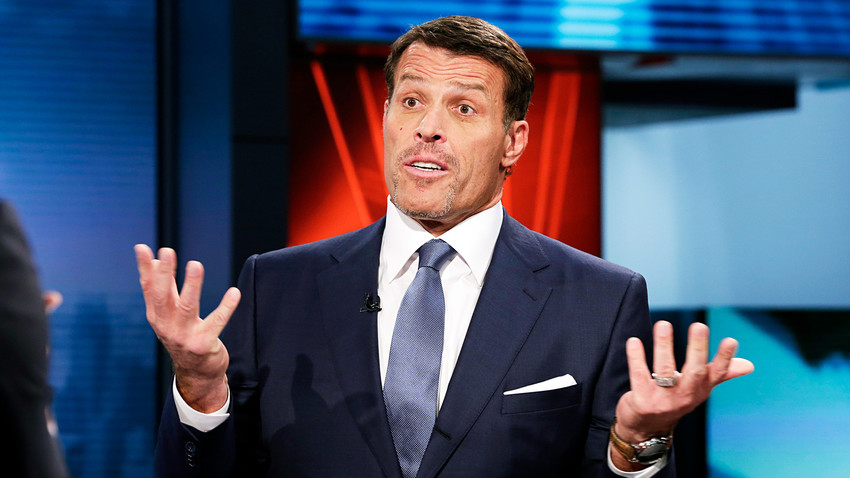 Tony Robbins earned a fortune (or should we say "yet another fortune"?) in Russia but not everyone approves of him.

AP
Russians are now questioning if Tony Robbins is the real deal, or a complete fraud who robs people of their money.

Recently, many Russians mocked fans of Tony Robbins, the life and business guru from the U.S. famous for his self-help books and seminars. He hosted an event in Moscow on Sept. 1. "The Earth is round”; “Ice is cold”; “Water is wet” – that’s how Andrei Spasatel, one of the jokers, described typical Robbins-style wisdom that so many people are willing to fork out for.

He has a point: The seminar on Sept. 1 involved Robbins geeing up the audience and giving useful life and business lessons. More than 26,200 people paid to witness the man in action. “It’s something unbelievable! 24,000 people are happy and recall their breakthrough moments!” Yulia Alferova, to the Minister of Economic Development, wrote on Facebook.

In another post, Alferova listed advice Tony Robbins offered for living and making a business successful. “Positive thinking is a strategy!”; “The internal world makes you successful”; “Disappointment destroys you!”; “If you do the same thing you get the same result,” and so on.

Then, everyone jumped and danced. Literally (starting from minute 4).

Some people mocked Robbins’ audience, claiming they paid a crapload of money to hear basic truths available on motivational websites for free. Journalist Ekaterina Vinokurova compared Robbins’ admirers to older audiences who once believed it was possible to “charge” water simply by placing it next to the TV during televised psychic performances.

“Perhaps it’s all about lust for miracles...Tony Robbins created the world of pink unicorns for people who seem to be adults and these adults jumped into this world happily,” Vinokurova suggests.

Others just laugh. “Successful people post their photos from Robbins’ ‘Sermon on the Mount.’ Unlike mammoths, idiots will never become extinct,” one user joked on Twitter.

On the other hand, several people defended Robbins’ authority. “Tony can be compared to such effective psychologists like Dale Carnegie or Allen Carr… He teaches how to control your psychological state, to remain in a good mood, affect other people, be successful,” Ivan Lepikhov reacted on Facebook.

Perhaps the most hilarious thing for those making fun of Robbins was how much money he earned for a couple of hours of work. With the cheapest tickets costing 30,000 rubles ($440), the math is simple: The show generated about $12 million through ticket sales. Of course, the venue and organizers need to be paid, but the sum is still impressive.

For most Russians, 30.000 rubles is a serious amount of money: According to statistics, it’s only a little less than an average salary (42,500 rubles), so most people who could afford Tony Robbins’ seminar were probably from the upper middle class at least. Nevertheless, some of them reported they were treated… inappropriately.

“In this crowd, people who bought tickets for 100-150,000 rubles ($1,400 – 2,200) are waiting to get their headphones for the show’s translation,” Ekaterina Starodubtseva wrote on Facebook. It looks more like the worst imaginable rush hour on the Moscow Metro:

And after they got their headphones, their problems didn’t end there. “They gave us our headphones…only without batteries so they were not working,” “eugenezbitsky” wrote on Instagram. “Then they just threw a box with headphones into the crowd and people were pushing each other out the way to get them. Those who succeeded rushed to the street to buy batteries outside the Olympic Stadium…”

And to round things off, Tony’s show started three hours late.  “Tony is surprised with the tired crowd: “You’re so silent!” he shouted. Yeah, what a surprise…,” Katerina Bogina joked on Facebook.

Be sure, Tony Robbins is far from being the most impressive artist in Russia. Meet, for instance, Neuromonakh Feofan who combines bears and very hardcore folk music.