Who is Daria Kasatkina, the rising star of Russian tennis? 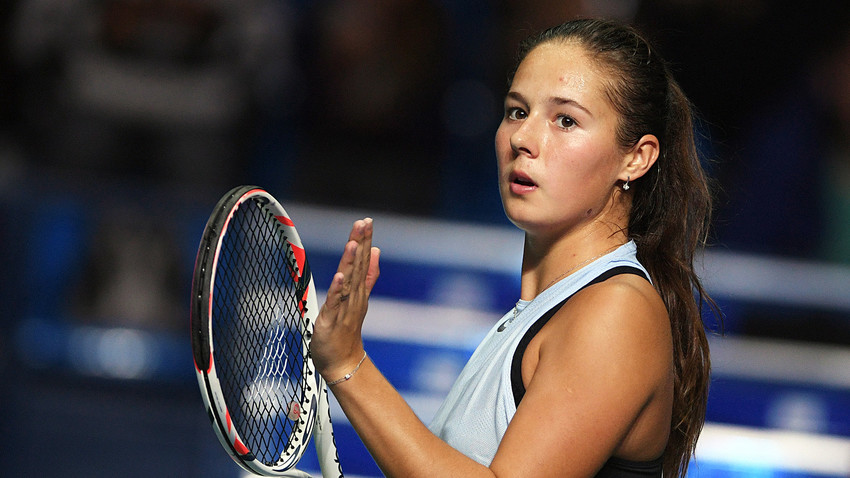 Alexey Filippov/Sputnik
The young player is already ranked 13th in the world and has beaten a number of big names on the court.

Rising Russian sportswoman Daria Kasatkina has been making waves in the world of tennis lately. At the age of she’s already considered Russia’s best female tennis player and is ranked 13th by the Women's Tennis Association (WTA).

Over the past Kasatkina has beaten several leading players, including Venus Williams, Garbiñe Muguruza, Sloane Stephens, and Caroline Wozniacki. And even though she didn’t progress beyond the quarterfinals at this year’s U.S. Open in September, she’s considered a future star.

So what do we know about this young Russian talent?

Born in the Russian industrial city of Tolyatti (990 km southeast of Moscow), Daria always knew she wanted to be a professional tennis player. She inherited her athletic prowess from her parents Sergei and Tatiana, who are both fond of sports. Apart from holding down jobs (her father was an engineer and mother - a lawyer), they both had a professional background in ice hockey and athletics respectively. When Daria was six, her elder brother Alexander introduced her to tennis and she hasn’t looked back since.

After doing well on the junior circuit (in 2011 she won the first junior event in her hometown), in 2013 Daria took her first steps to play the pros. In 2014, she won the Roland Garros juniors and made her senior Grand Slam debut at the U.S. Open in the main draw as a lucky loser in 2015, reaching the third round.

“From this moment, I start[ed] to believe that I can beat good players,” she recalled. “I play[ed] very good [at the] Kremlin Cup, [reached the] semifinals from [qualifying] and we won doubles with Elena Vesnina. Those were two very important moments for me because I start to get confidence.”

Daria quickly climbed up the WTA ranking to reach the top 100 in 2015 and the top 50 in 2016. Praised as a baseliner with a killer forehand, two-handed backhand, and the ability to play with great variety, Daria won her first WTA singles title at Charleston in 2017.

In the spring of 2018, she became Russia’s top women’s tennis player by rising to her highest ranking of 11th after reaching the finals of the Indian Wells Masters.

Now she ranks 13th but Daria is more focused on what happens on the court. “If you have a high level, the ranking will come automatically. It doesn't really matter if you are 10, 11, or 12. If you are playing on the high level, everything will come,” she says.

Previously coached by Slovakian Vladimir Platenik and now Belgian Philippe Dehaes, Kasatkina dreams of winning the Golden Grand Slam - the four Grand Slams plus an Olympic title. This is an achievement that only one tennis player to date can boast of - Steffi Graf, who did it in 1988. “I was around nine when I heard about that and I instantly knew that I wanted the same,” Daria says.

Daria mainly lives and trains abroad and rarely visits her hometown. As for Moscow, it is not the place for her, she admits. “Moscow is [a] very big city, and I don't like it. [There are] a lot of people, a lot of traffic, and I hate it,” Daria shares. A huge fan of Spanish tennis player Rafael Nadal and FC Barcelona, she loves to spend time in Barcelona.

In between a busy schedule of traveling, training, and competing,  Daria only gets a few weeks a year to relax. “I practically have zero time for myself,” she admits. “The last time I went shopping was when a suitcase with all my non-training clothes was lost by the air company and I had to buy a new wardrobe.”

Despite her recent success, Daria remains a humble person. She values her closest friends and family. Her elder brother who introduced her the sport is always by her side as Daria’s personal fitness trainer. She constantly has support and continues to follow the advice of her parents - “Always do things your way.”