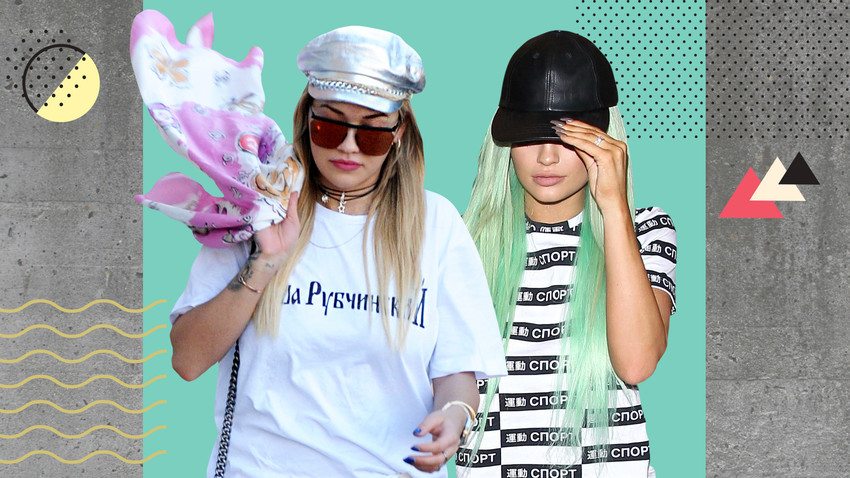 Legion Media, Freepik
Hollywood’s most iconic celebrities are obsessed with Cyrillic slogan streetwear, but do they have any idea what the logos actually mean?

Gosha Rubchinskiy, a Moscow-born fashion designer, took the industry by storm when he launched a streetwear collection incorporating post-Soviet aesthetics and garments emblazoned with Cyrillic script. This trend is now in vogue among designers, and foreigners are fascinated by this mysterious font. Here are ten Western celebrities who have been snapped by the paparazzi sporting Russian letters and symbols.

Although just five-years old, North has become something of a fashionista. Here she’s wearing a Heron Preston turtleneck with the word “стиль” meaning “style” written across the collar.

Rubchinskiy has collaborated with a number of sports brands, including Adidas and Fila. Kendall wore a Rubschinskiy x Fila shirt after the Alexandre Vauthier show in Paris in 2017. The shirt features the designer’s name in Cyrillic, a signature addition to most of his designs.

Kylie was spotted at LAX Airport wearing a Gosha shirt with the word “sport” written in Cyrillic, one of the main themes of the designer’s collection.

Kim raised a few eyebrows when she attended the ballet in an oversized red hoodie with a communist hammer-and-sickle symbol. The hoodie was part of Vetements’ collaboration with the Russian retailer SVMoscow.

Rita Ora leaving her hotel in New York in a Gosha Rubchinskiy shirt.

Ryan Gosling in another Gosha-designed T-shirt which combines the Russian and Chinese flags.

The famous pop star performed at London’s O2 arena in a Gosha T-shirt with the slogan “рассвет” (“dawn”).

Who knew Kristen Stewart was a KGB agent? Only joking, she’s just casually wearing the secret service’s initials on her shirt.