How to survive a nuclear war in Moscow 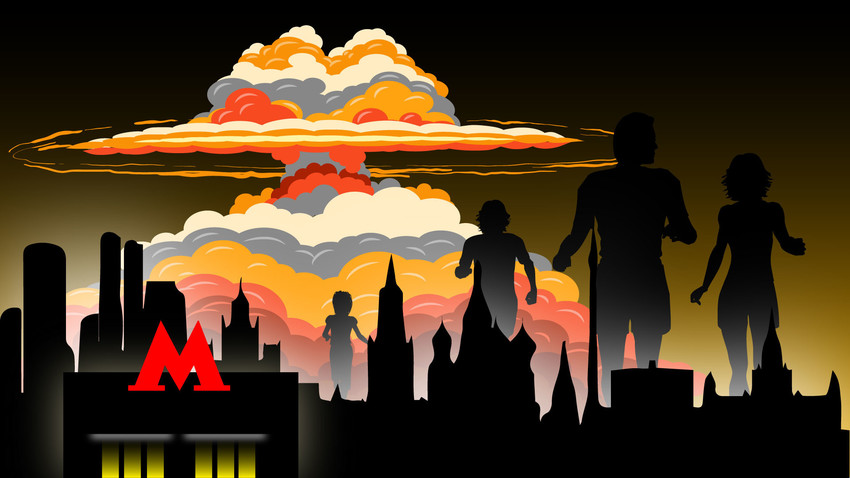 Sometimes, every person can just run for their lives. But where to?

Vexels; Alexander Kislov; Legion Media
The Russian capital has thousands of bomb shelters, including the subway, but not all stations are up to the job.

Just imagine, for ages you’ve been planning your dream trip to the new-look Moscow, and finally saved up enough cash to do it. Or let’s say you already live in Moscow (to the resentment of non-Muscovites). One day you’re out for a stroll in Gorky Park, or maybe having lunch in a trendy café, when suddenly nuclear war breaks out. What a downer.

It doesn’t really matter who started it. On hearing the news, your first thought probably won’t be to delve into the intricacies of international politics that led to blooming (in both senses) nuclear mushroom above your head. You need to drop everything (including, heaven forbid, your cappuccino) and run. But where?

Listen out for an announcement

Modern defense systems are able to give advance warning of a nuclear missile strike, so the government will have time to evacuate itself (first things first) and then warn the population. So the first sound you will hear on this not-the-happiest day of your life will be the deafening howl of a siren.

As explained by a spokesperson for the Russian Ministry of Emergency Situations (MES) in an interview with RIA back in 2008, “the signal is sent using electric sirens, after which residents ... should listen to information broadcast on radio, television, or other means of communication.”

In other words, when the siren starts, you should switch on the radio or TV, and the MES will report on what’s happening. In the event of a nuclear missile strike, they will advise you to head for the nearest shelter asap.

Know where to run

It is not known exactly how many bomb shelters there are in Moscow. Moslenta puts the figure somewhere between 5-7,000 (the inevitable legacy of the Cold War, when Soviet citizens were expecting WWIII any second). They are generally located in the basements of residential buildings or in separate underground rooms.

To get the address of the nearest bomb shelter, the MES advises contacting “your district training and consultation center”—a list is available on the Moscow government website. However, in the event of a nuclear conflict, you are unlikely to have the time or desire to exchange pleasantries over the phone with even the most polite urbane official, so instead you can use this handy bomb shelter map.

Move to the subway

The Moscow Metro is one of the best places to withstand a nuclear strike. Not all stations, however. Since 2012, the construction of “civil defense facilities” at new subway stations has not been top (or even bottom) of mind. In fact, it’s been abandoned altogether. Deputy Mayor Marat Khusnullin justifies this decision with the reassuring words: “I hope there will never be a war.” Fingers crossed.

As for the old-style stations built before 2012, they can indeed protect a person from the injurious effects of a nuclear explosion. In case of nuclear war, the hermetic doors will shut, shielding all those fortunate enough to be inside the station from the shockwave and radiation flux. Plus, they won’t let in air contaminated with chemical or biological weapons.

The deeper, the safer

The deeper the station, the higher the chances of surviving the nuclear apocalypse unfolding on the surface. As such, the best option is Park Pobedy (Victory Park) on the Blue Line, the capital’s deepest station at 73 m. But if you don’t happen to be there, any station within the Circle Line will generally do: almost all are located deeper than 30 meters. A map of subway stations indicating their depth can be found on the Mayor’s Office website.

“In the event of a direct nuclear strike on the ground above, the subway is unlikely to help. The huge blast will create a crater,” notes subway expert Alexander Popov in conversation with Furfur. “Fortunately [relatively speaking], the best option for destroying a large area is an airburst. People inside the subway won't see or hear anything, and not suffer from radiation or extreme heat.” In addition, stations are equipped with supplies of food and drinking water enough for a few thousand people to shelter for several days.

Where’s the best place to stand inside a station crowded with people no less terrified than you? Most likely, you will go where the crowd takes you (just try not to lose loved ones in the panic) and wait for instructions from the police, who should, hopefully, be in charge of the situation. The MES recommends taking up a position on platforms, in trains standing at platforms, or inside tunnels (don’t worry, there won’t be any trains going through them any time soon, if ever). So just stand or sit where you’re told.

You're running to a bomb shelter or the nearest metro station, and time is of the essence: you have 10-15 minutes (the interval between learning of the attack and the missile(s) striking, depending on where they were launched from). According to MES and Moscow Metro procedures, subway stations are to close the hermetic doors within 10 minutes of informing the public. In some cases, "the period may be increased to 15 minutes" — but no more than that.

“Latecomers’ pleas will not force the doors open,” a 1997 news piece optimistically warned. And although that was 20 years ago, the rules remain as stringent as ever. So perhaps it’s true after all to say that our main hope for survival lies in war never breaking out.