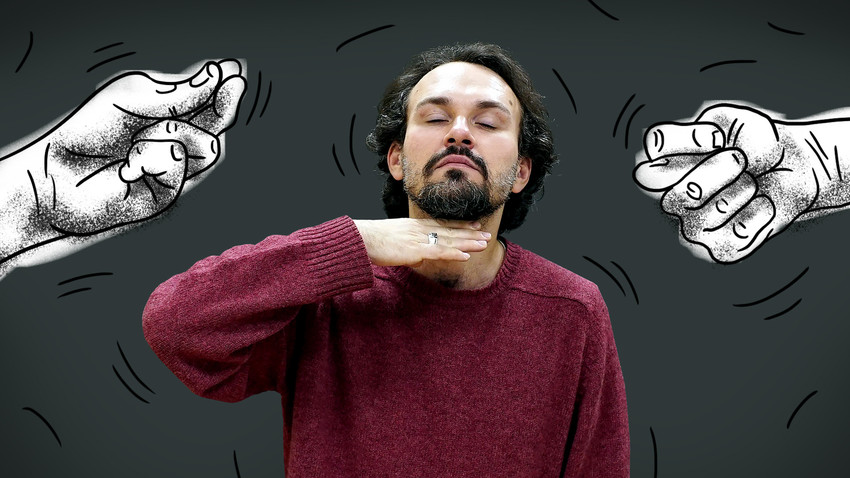 Pavel Inzhelevsky, Natalya Nosova
One of these gestures is exclusively Russian, while others have specific meanings in our culture. Check out this short video guide to become fluent in Russian gestures.

1. Flicking a finger on the

is a famous and exclusively Russian gesture for drinking. Legend has it that during the construction of St. Petersburg, an unknown Russian craftsman offered some sound engineering advice regarding the building of the Peter and Paul fortress. As a result, Peter the Great offered the man any reward he desired, so the cunning craftsman asked to be branded (literally like a cow) with a sign that allowed him to drink for free in any Russian tavern: the guy would just come in, point to his scar, and get drunk free of charge. We don’t know if the legend is true, but the gesture has survived to this day (but it’s not the only Russian drinking tradition).

Through the ages in Russian, this particular gesture – which involves sticking one’s thumb through the index and middle fingers – has been the equivalent of sticking your middle finger up at someone. For example, in the 19th century, a notorious brawler called Yakubovich was depicted with his fingers in a shish, causing a major scandal.

The Brazilian and Portuguese equivalent of shish is considered a lucky gesture, while in Germany it has sexual connotations and is very offensive. In Japan, Korea, and China, this gesture also means copulation – just as it did in Russia. But now, it’s not offensive in any way. Shish is sometimes used as a gesture to drive off evil spirits; mostly, it means “you get nothing.”

3. Holding the side of a hand to the throat

“I’ve had enough” or “I’m fed up with this” – that’s what this gesture means, and no, it’s not related to food in any way. You can’t use it to say that you’re full – your host would instead think that you don’t want any of his food ever again.

4. Slapping a hand on the

“facepalm” as a gesture has now reached Russia, thanks to Internet memes. But this is not a facepalm. A proper facepalm involves covering your face (eyes and nose) with your hand, while this Russian gesture is a bit different. It says “how stupid I am!” or more often “I forgot to… (turn off the oven, feed the cat, pay tax etc.)”

“When an accountant’s baby is born, the first thing he learns to do is to put his thumb, index, and middle fingers together,” a joke goes. This gesture is almost obsolete now and used by the older generations, but during Soviet times it was omnipresent: if you want to ask for or offer a bribe, to show that you have no money or to ask for some – this gesture does it.