Three taxi drivers who found fame for their unusual behavior 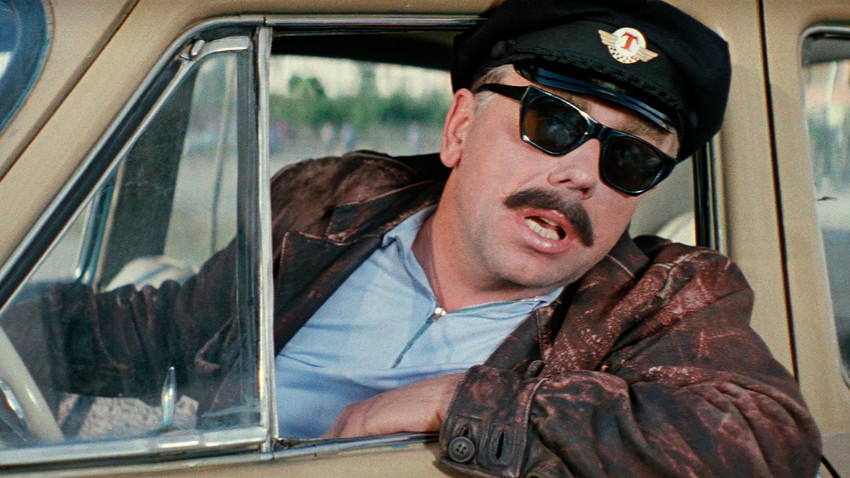 Leonid Gaidai/Mosfilm,1969
Are you passionate about gadgets, Hemingway, or the ukulele? If so, try to flag down these cabbies.

You’re stuck in traffic in St. Petersburg when suddenly you hear the strains of Hawaiian melodies. Don’t be alarmed or call the police. This is St. Petersburg cab driver Ruslan Gabdullin, 22, who wants to make your life less depressing and, if possible, relieve your suffering at least for the duration of the trip.

“I see that 50–60% of passengers get into my cab with a long face. Why not cheer them up a bit?” says Gabdullin (link in Russian).

At the start of his pro-happiness experiment, Gabdullin was a little afraid of how some passengers might react, especially late at night. But such fears were in vain. “There’s been no negativity at all, at the very least there’s almost always a smile,” says Gabdullin.

Fortunately for passengers, the young cabby only starts plucking in traffic jams and at traffic lights—otherwise the reaction might be slightly less positive.

This remarkably enterprising Barnaul taxi driver was shown on TV when a shocked client posted a video of their cab ride online: almost the entire dashboard and windscreen were littered with gadgets, which the work-thirsty cabby used to take non-stop orders.

According to the passenger, the taxi driver admitted during the ride that he earned no less than 10,000 rubles net per day. True, the traffic police quickly shut down his operation immediately after he gained online popularity.

3. The discount giver who wants to get people reading

Muscovites learned about Moscow taxi driver Saveliy (surname and age unknown) when a client posted a video of him being offered a 100-ruble discount if he read a book during the ride instead of fiddling with his phone. Having agreed, he was offered a selection of classic titles, including old editions of Hemingway, Babel, Bunin, and Gogol.

“I want people to read. They always sit on the backseat glued to their phones and social networks,” remarked the cabby.

Not everyone appreciates his fatherly approach. Some get carsick from reading, while others are not impressed by the choice of books. “To be honest, fiction is pointless for young people. After uni, you need to read books about psychology and job-related literature,” a Twitter user commented.

And check out this madcap adventure as a bonus.