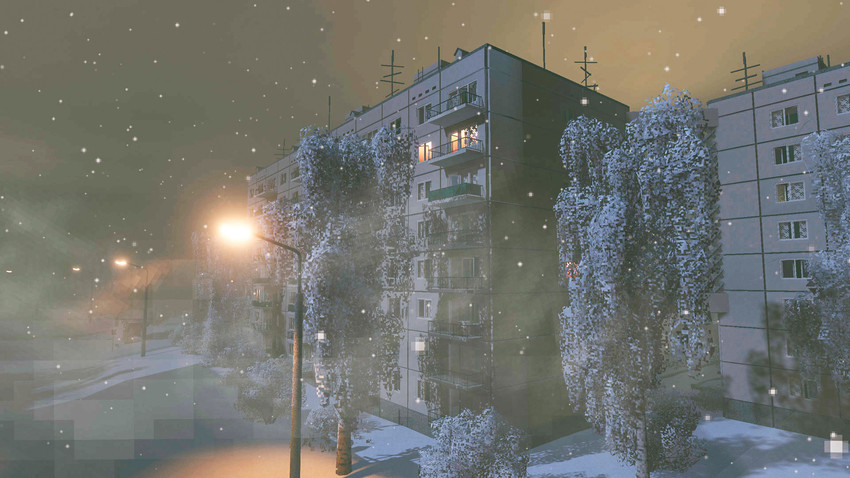 Ilya Mazo/YouTube
"It’s Winter” traps you in an endless “groundhog night” in a provincial town: a scarily convincing simulation of an average Russian’s life – just as unoptimized and dumb as the real deal.

Suddenly, you’re awake at night in a one-room apartment in a Russian town. You are poor: you don’t even have a computer, only a radio in the kitchen. Let’s check out the fridge for something to eat. Surprisingly, there are tomatoes, some eggs, and some baloney. The microwave is functioning. However, the kettle is not, so, no tea for you. In your living room, two sad flowers sit on a windowsill. A carpet hangs on the wall. Outside, it is snowing incessantly...

For all you lovers of obscure Russian art, the game “It’s Winter” was created as a part of a project titled “WINTER”, by Moscow poet Ilya Mazo. The project, which the author calls “a digital opera”, includes a book of poems, a short movie, a music album and a theatrical performance that is yet to be announced.

A reality that doesn’t work well 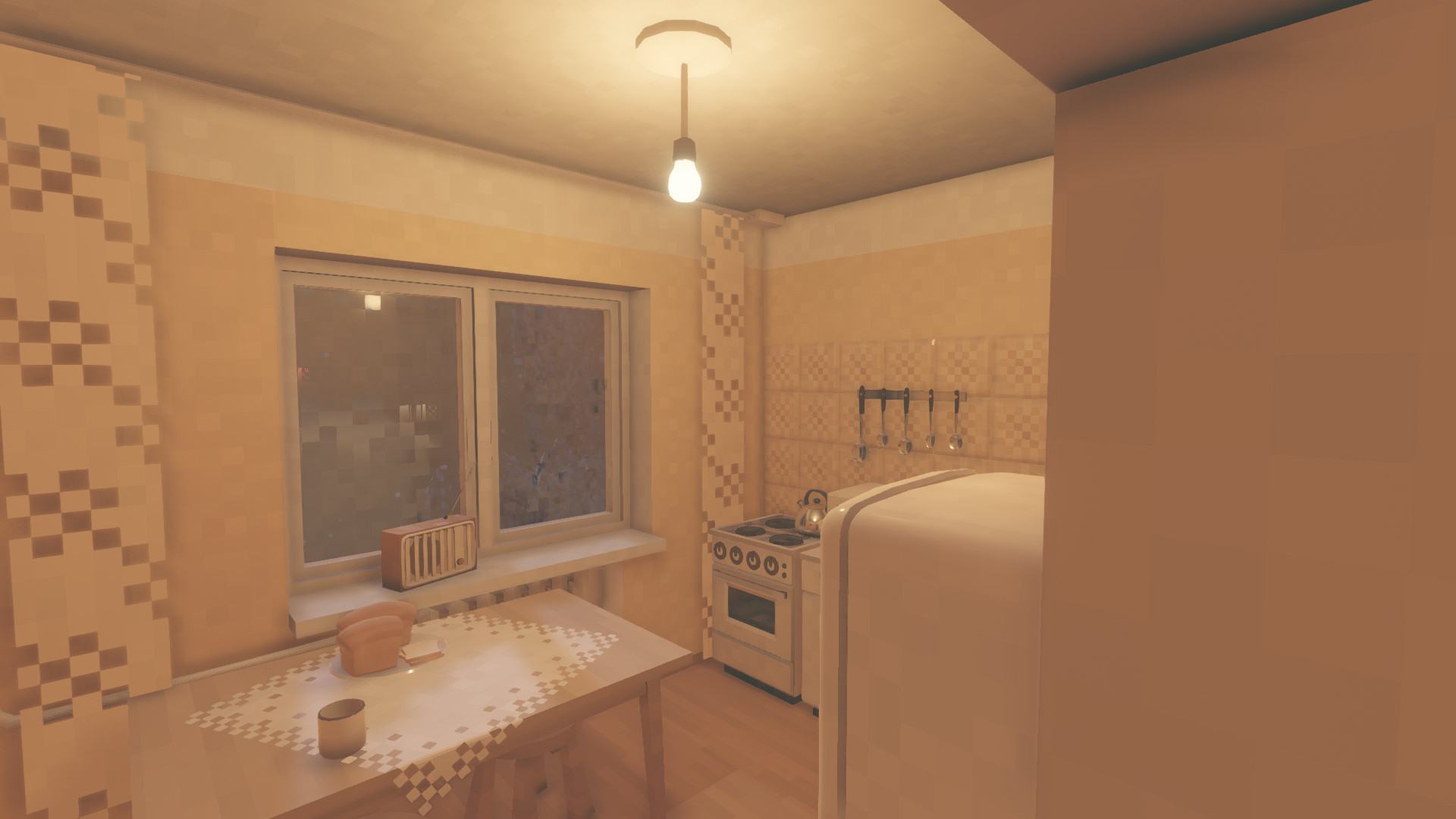 It’s the game, not the poems or the play, that attracted the most attention from both Russian and English-speaking players and media. Made available on Steam in early March 2019, it seems like a perfect simulation of Russian life. Sadly, the simulation is as malfunctioning as Russian life can be. Was this done on purpose?

Created by Alexandre “sad3d” Ignatov, “It’s Winter” is just a walking simulator. Much like in The Chinese Room’s “Dear Esther”, the player can only walk and interact with selected game objects. You can open and close the fridge, turn the light on and off – but you can’t sit or lie down. Turn on the radio, and it broadcasts only static and a poem read in a girl’s voice. Maybe there's something to do beyond the apartment 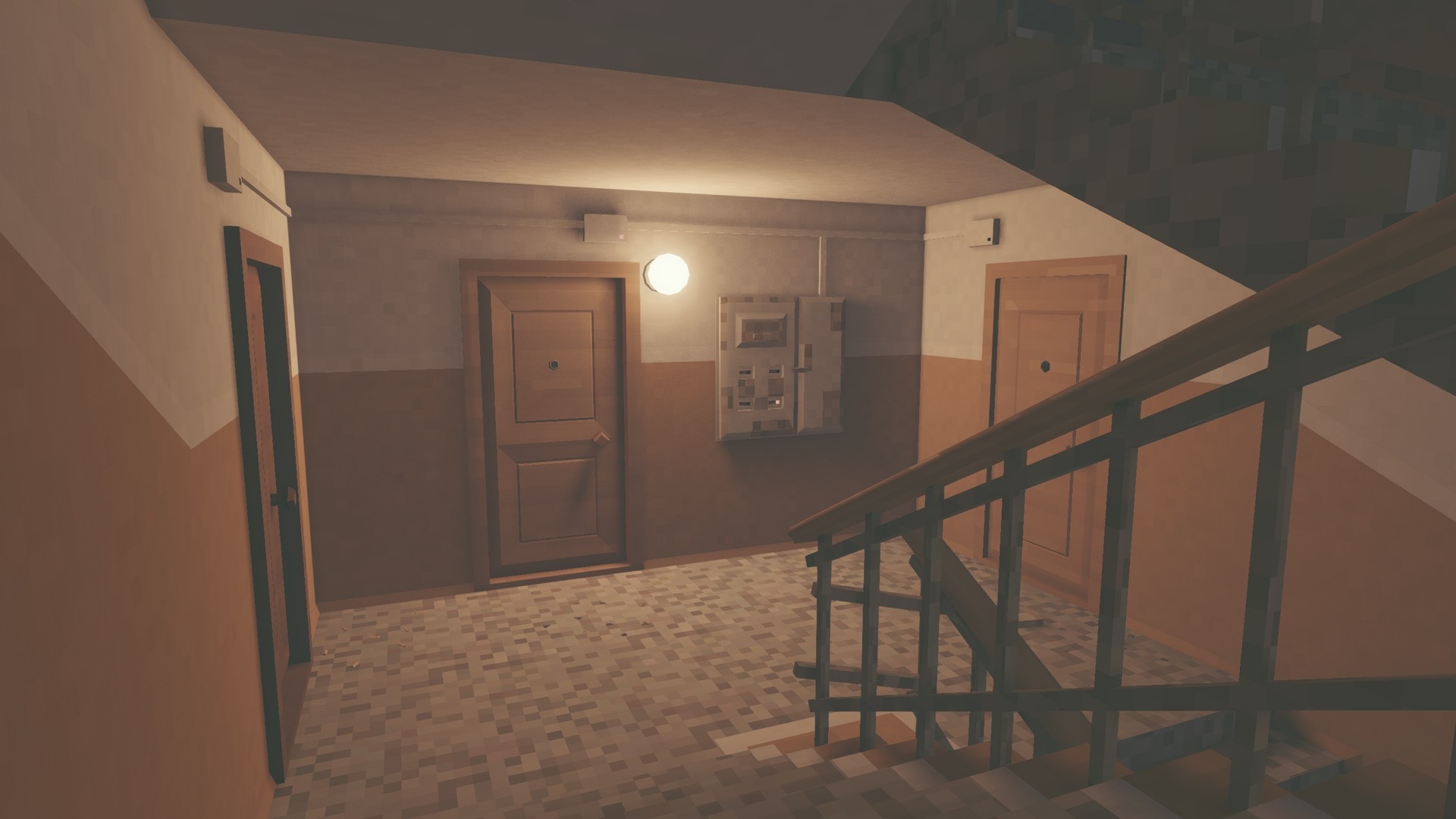 turns out you can only pick up the trash strewn about the hall outside your door. The doors of other flats won’t open, however much you pound on them. In the yard, you can see an empty playground, lit windows of other houses (no going in), or walk by night shops (closed). When trying to leave the location, you can at the very best encounter a lonely tractor. If you try to walk into the woods, the game begins to lag, and eventually, you get stuck in the textures. Apparently, a glitch in the Russian Matrix. Reload.

What attracted most players is that feeling of being trapped. Indeed, when you live on the outskirts of a tiny Russian town, the days all look the same, especially in winter. Indeed, the scenery is meticulously crafted, with great attention to detail. And it just makes you want this game to be more fleshed out.

‘First, I flushed the poems down the 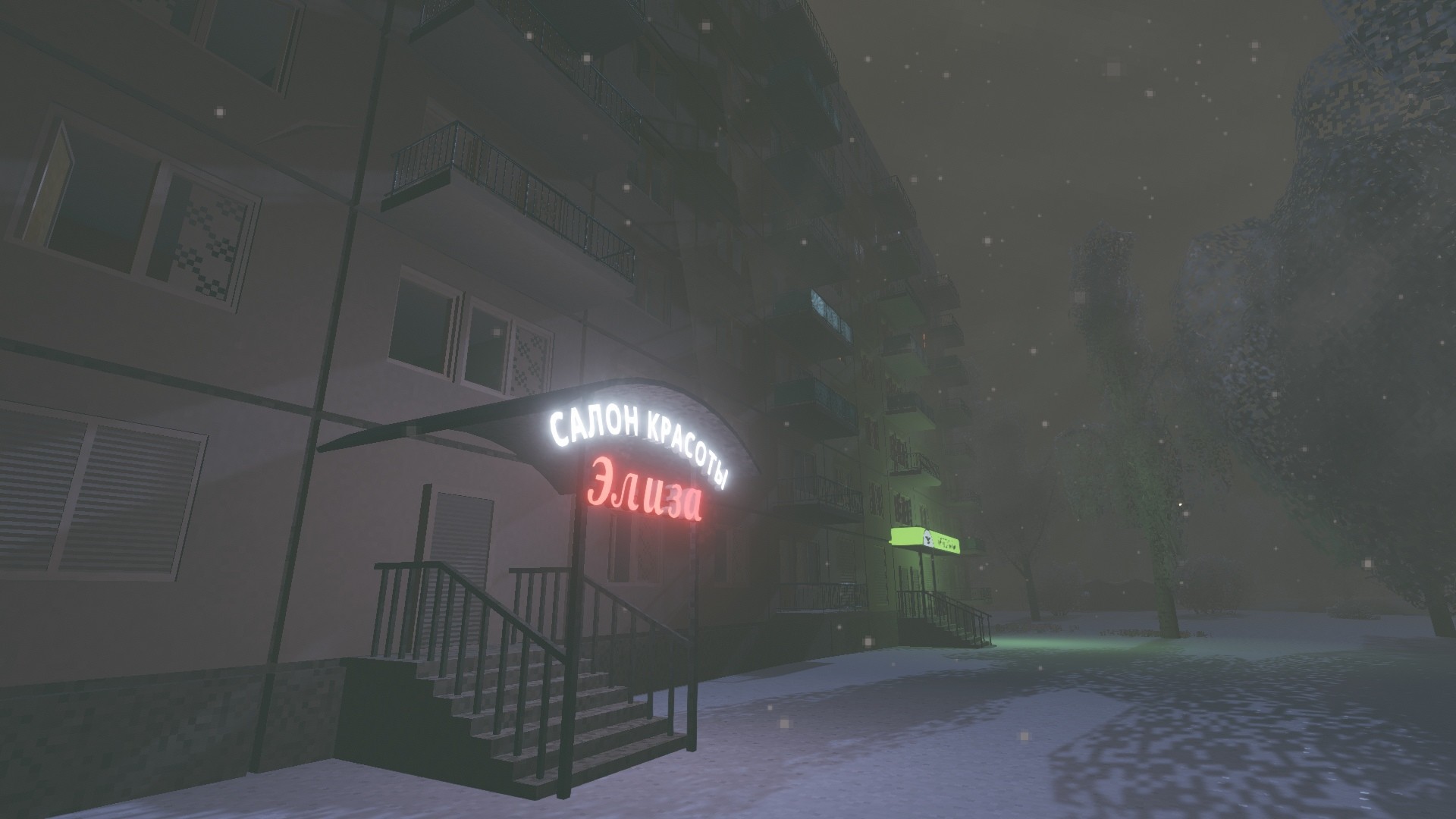 find myself in the hallway,
Chewing on a piece of .
I exited the kitchen,
But to walk into the room there was no need.

That’s one of more than a hundred short poems included in the book of poetry created for the project. They are all very minimalist and carry little to no meaning or imagery. In the short film, the poems from the book are read or sung by obscure Russian musicians.

But the users on Steam don’t pay much attention to the poems, even if Ilya Mazo, the project’s creator, says the poems are “the axis” of the project. “First, I flushed the poems down the toilet,” a user wrote on the game’s page on Steam. Russians just want to play the simulation of despair, and they want it to be accurate.

“Cigarette butts are everywhere, but you can’t smoke. There’s no ‘Russian despair’ without nicotine!” another gamer exclaims. “I’d like to see more of the real city, I want noise in the neighboring flats, drunk screams out of the windows!” 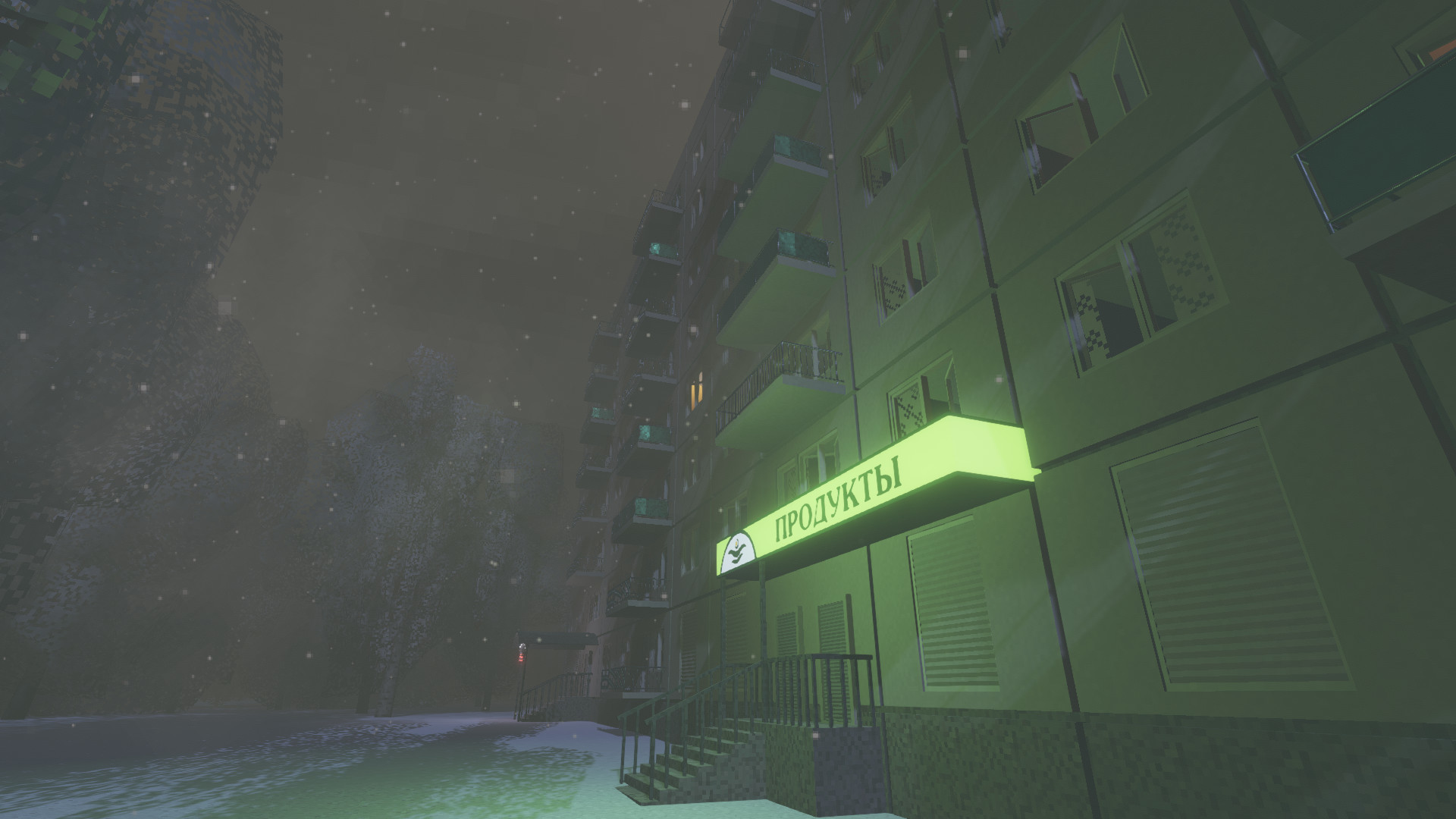 Russian gamers love despair – but they wouldn’t lose their sense of humor in any situation.

“Create a multiplayer version, I want to race my friend in vodka drinking.”

“Why can I make only scrambled eggs? WTF, I can’t make a soup? I banged on the potatoes and cabbage with a knife for a long time, but I can’t cut them! WHY?!”

Some English-speaking gamers appreciated the project, too: “If you feel like your life is busy, buy the game - it's too relaxing to pass up. My top tip would be to turn the bath and sink on and wait for the running water sounds to just drive you away into your own world inside the game. It's atmospheric, a little creepy but very relaxing. Such a somber mood.”

Other users, however, were outright skeptical. As a reviewer noted, the program is too demanding for an indie game built on the Unity engine. “It’s too much, selling a location that can be compiled in Unity overnight for 200 rubles ($3),” says a user. “The game is not worth what I paid for it,” – say many others. One of the most popular user reactions is “This is a nice concept, but we want more interactions, more content”.

The developers responded to one of the claims. “We’re completely independent, and there are just 2 of us, that’s why the game is not hardware-optimized: it would have been as hard as creating another game… Lower the graphics quality and that should solve the problem. We were doing our best to create the game, don’t blame us because your PC isn’t working properly, or else, you won’t have games about Russian winter, but just the various Far Cries with million budgets.”

And they have a point here, too.

What is clear from this is that Russians just can’t get enough of sorrow and despair in their lives. “I’m playing a simulator of life in a concrete   while sitting in a concrete  house. Waiting for the VR version to come out, to escape reality to reality!”

Couldn’t have put it better.