Russian Batman in green mask saves the country from trash 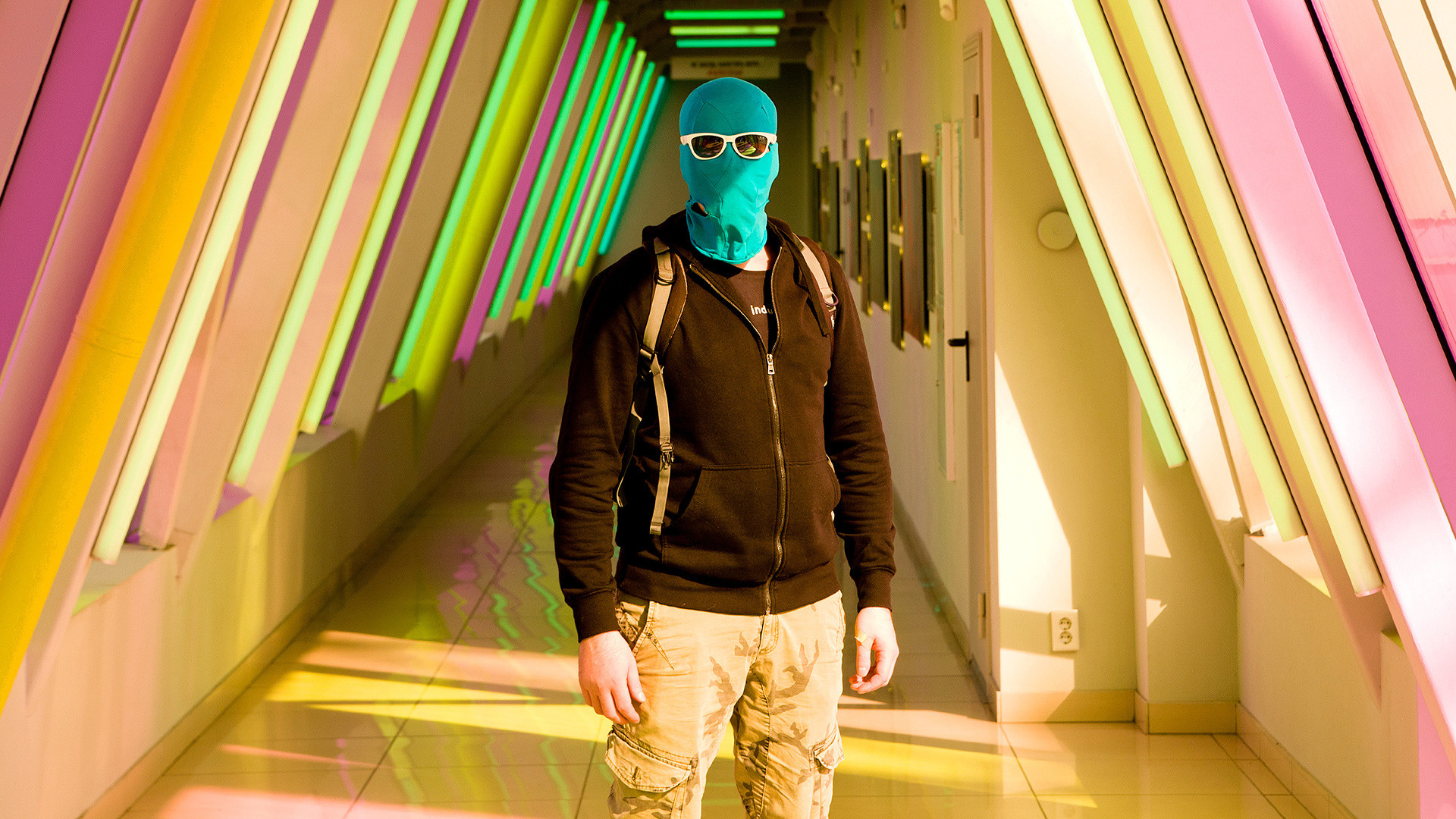 Sergey Poteryaev
This guy from the industrial city of Chelyabinsk calls himself Chistoman (Cleanman) and is inspiring thousands of Russians to take up the #TrashTag challenge. Who is this undercover superhero?

Industrial Chelyabinsk bears an eerie resemblance to the fictional Gotham City, known to all as the home of Batman. Yet the factory emissions, landfills, and murky rivers here are very real. Dirt and household trash are one aspect of reality that Russians have trouble coping with psychologically. They cannot help flooding their habitats with plastic cans and bags, not sparing even the greenest and most picturesque areas. The capital of the Southern Urals, together with its surroundings, is one of the most industrially polluted regions of Russia – quite an achievement given the competition. 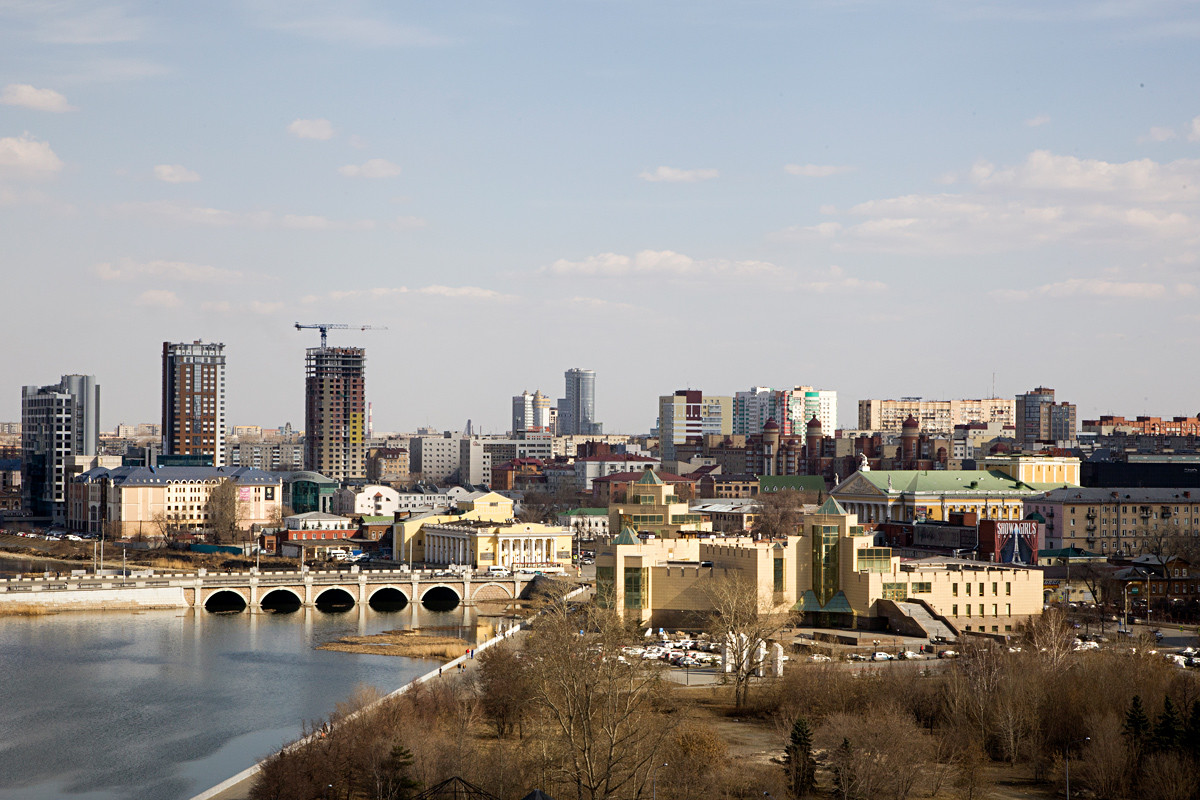 Chelyabinsk, the view from above.

As in the comic-book universe, what Chelyabinsk needed was a superhero to clean up the city, in a very literal sense. Fortunately, someone heeded the call.

At the entrance to the central park in Chelyabinsk, I am met by a tall guy with a trendy beard. He is dressed in camouflage pants and sports boots with a black backpack, and, like Clark Kent, does not stand out from the crowd. But as soon as we enter the “wild” area of the park (more like a forest), he takes out a huge black garbage bag, a green knitted mask, white sunglasses, and turns into Chistoman, come to rescue the city from garbage. 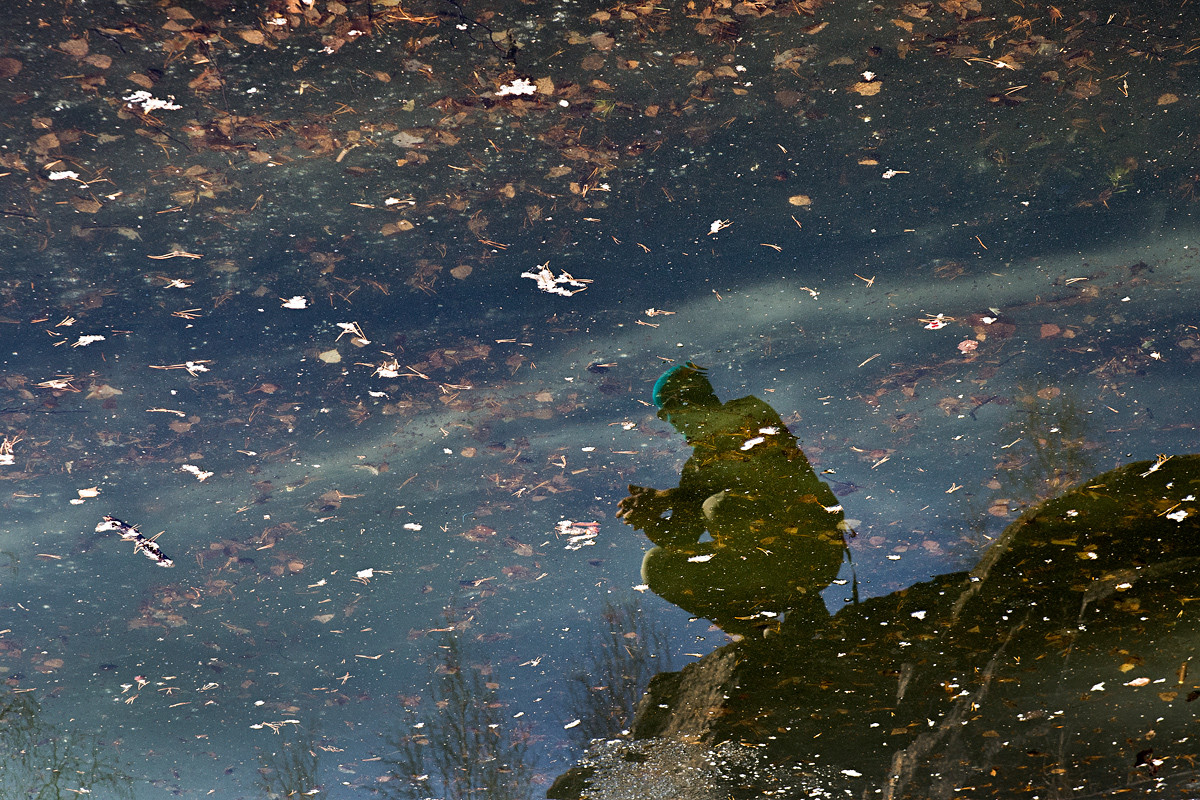 At the Gagarin central park.

The superhero’s real-life alter ego goes by name of Artur Matis-Sirazeev (he and his wife adopted a double-barrel surname on tying the knot), and is 30 years old. A German teacher by training, today he works in the field of social media moderation and promotion.

He describes his garbage collection activities as “raids,” and conducts them once or twice a week, most often on weekdays. Besides the park, today we are going to check the situation at Emerald Quarry and the recreation area in one of the city’s dormitory districts, where it all started four years ago.

It was only last year that everything here was put more or less in order, he explains. “Before that, there were just fields of garbage everywhere,” he says, casting an eye around the territory. Nevertheless, strewn around the benches are piles of beer bottles, empty snack packets, and the remains of yesteryear picnics that have mutated into something nastier over the harsh winter. In Chelyabinsk, the snow has just melted, and there are plenty of such “snowdrops” around the city. 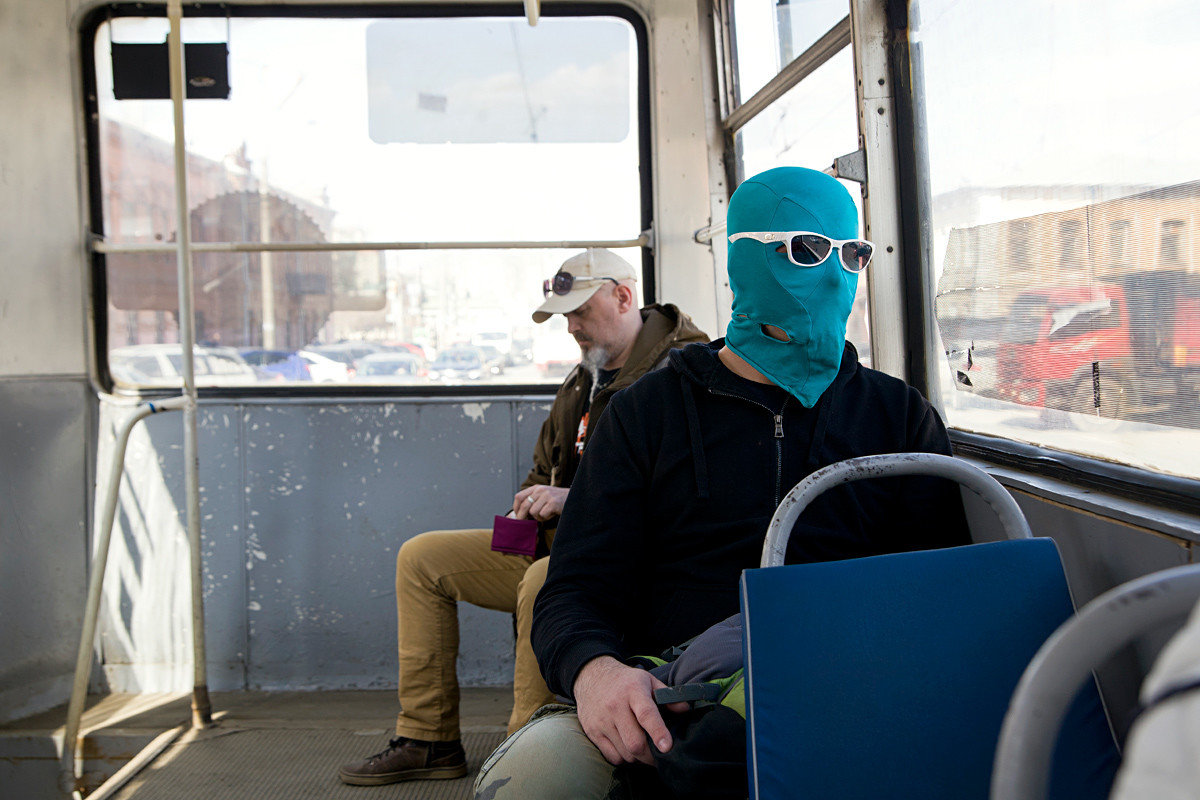 “I used to live nearby and often cycled here,” says Artur. After yet another ride was spoiled by cans and cardboard boxes scattered over the road, he decided that the garbage problem could only be tackled by a superhero. Artur bought half a meter of green cloth and sewed a mask for himself, leaving only a slit for the eyes. After that, he returned to the park armed with a trash bag. “I decided that simply taking photos of the mountain of garbage would be pointless. So I came up with the idea of Chistoman and posted a video message in social networks – that got the ball rolling,” explains Artur. 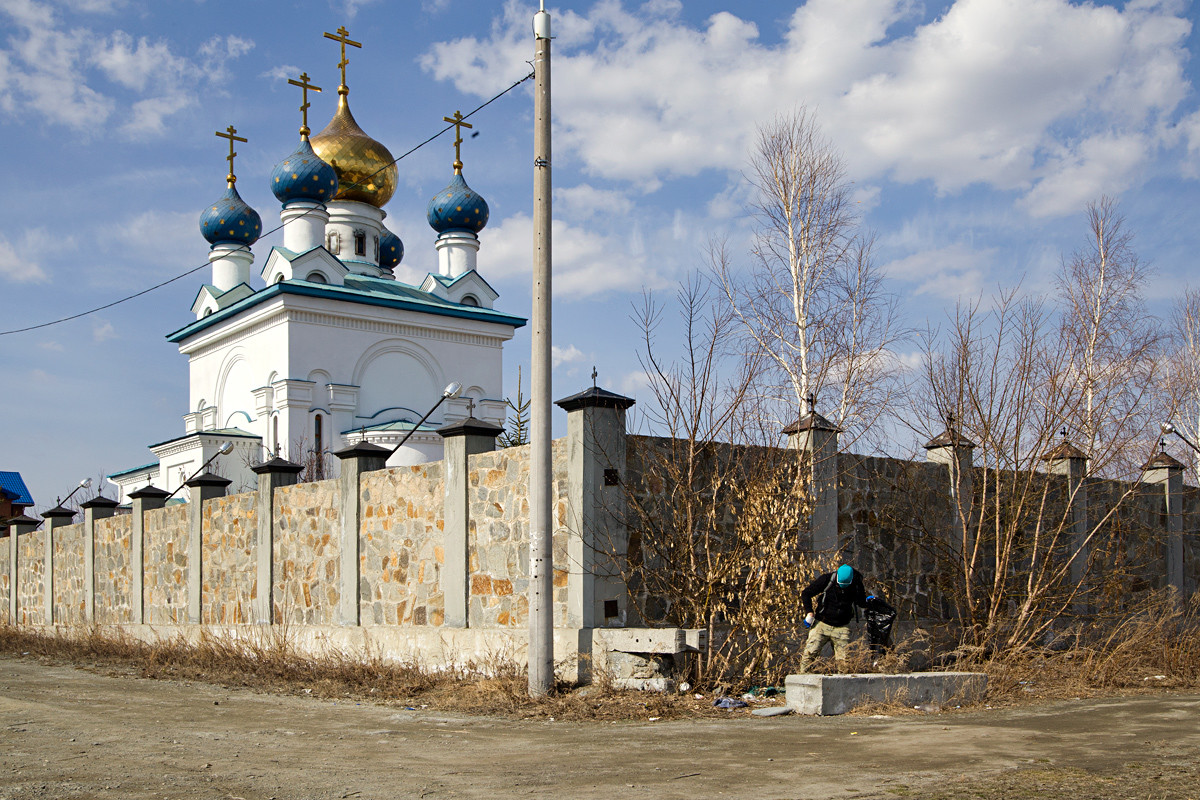 The place where he started four years ago.

“If the rubbish doesn’t get cleaned up, we can complain to the head of the district administration on its website. But instead of filing a complaint, I clean up the garbage myself,” he says.

Now he gets a never-ending stream of messages: “Chistoman, come and clean up for us!” The need for a superhero suggests the existence of a supervillain intentionally throwing garbage and polluting the city in his quest for world domination. But no, it’s all done by quite ordinary people who probably do not consider themselves evil geniuses. But Artur admits that his aim is not to be the savior of humankind. His more modest objective is to stop his compatriots from turning their environment into a toilet and to make them more ecologically savvy. 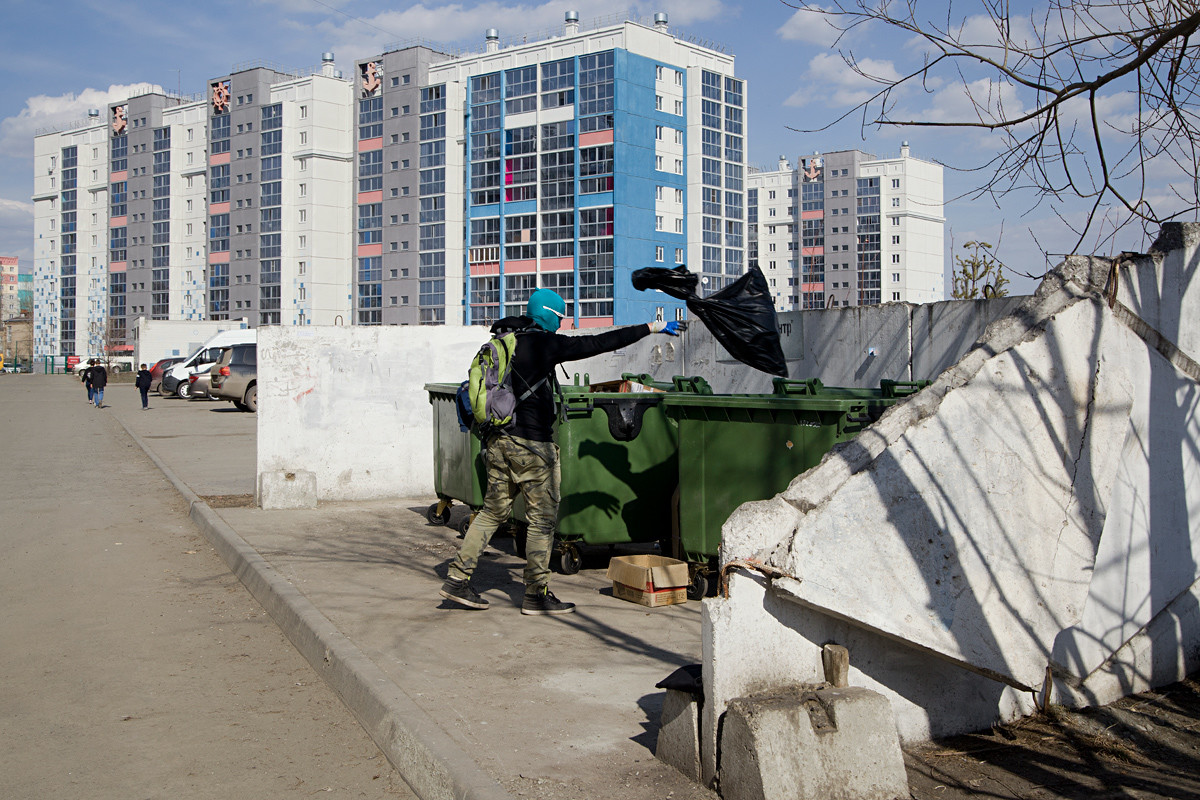 'I don't complain, I clean up the garbage myself'

And in this respect, he has already achieved some initial success. More than 20,000 people have already subscribed to his page, many of whom Artur has inspired to clean up their own towns and cities. His followers became so numerous that he had to set up the “League of Chistoman” community, where people can look for a cleanup company and post feedback. “It might be due to the current #TrashTag challenge, or maybe people just got more aware.”

The man behind the mask

Emerald Quarry, on the outskirts of Chelyabinsk, is quite a popular recreation area. People come here from all across the region to have a barbecue, swim in the lake, or just breathe some fresh air. But as you may have guessed, they leave a trail of garbage in their wake. The view that opens up is rather surreal: the rocky shores are scarred with indecent inscriptions, while hearty Ural squirrels leap around the heaps of rubbish, despite there being several large trash cans right at the entrance to the quarry. How to correct such irresponsible behavior, Artur does not know. It’s not feasible to assign individual litter wardens to all visitors. 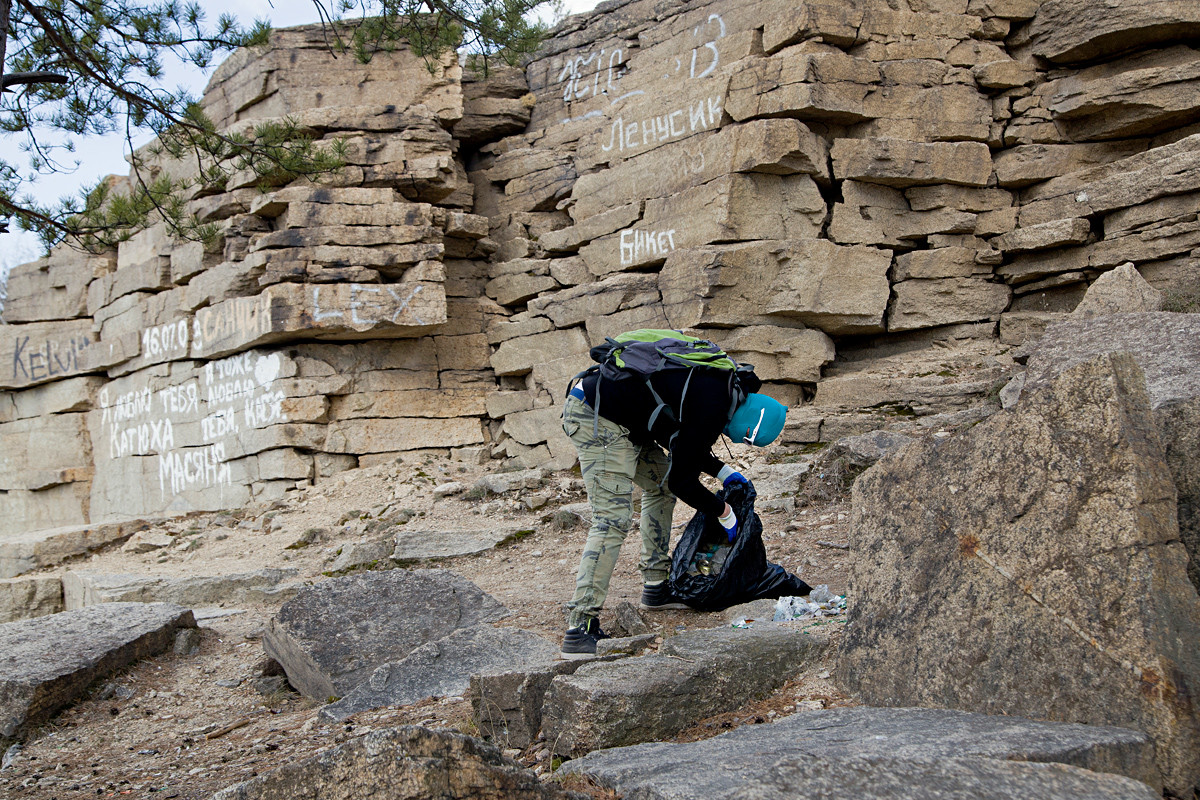 At the Emerald Quarry.

In just a couple of minutes, Artur collects a full bag of trash from around the pit. “In four years, I’ve carried out 150 raids and collected an average of five 90-liter bags each time,” he said. Not long ago, he set a personal record of 90 such bags. “I lined all the bags up in a row – it looked like a giant sausage of garbage 30-40m long.” Unable to move it by himself, he had to seek help on social networks. After that, other assistance arrived from an unexpected source. 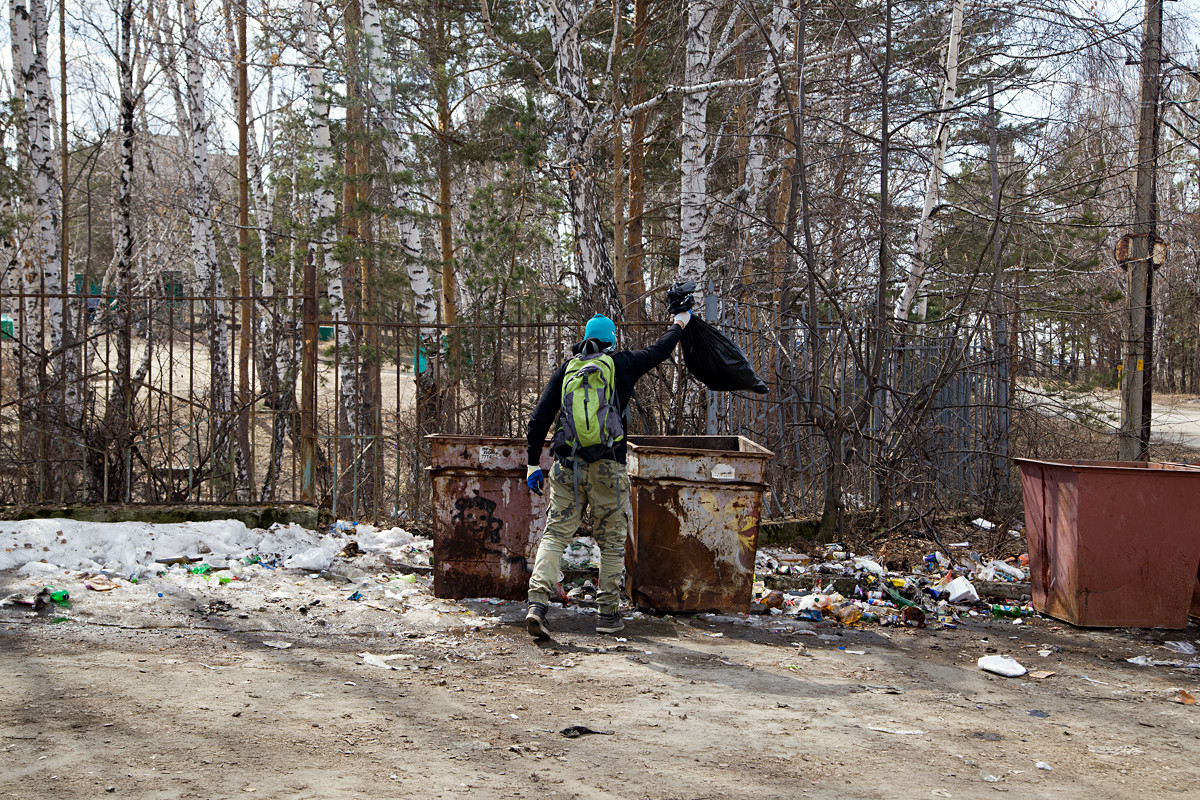 Trash cans right at the entrance to the quarry.

A subscriber from Moscow sent him a new mask, since the previous two were frayed from constant use. This mask too is now living on borrowed time, so Artur will soon need a replacement. Another subscriber read that Chistoman had cut himself on a glass bottle, and promised to send him special footwear and some super-cool gloves able to withstand even cuts from a knife. 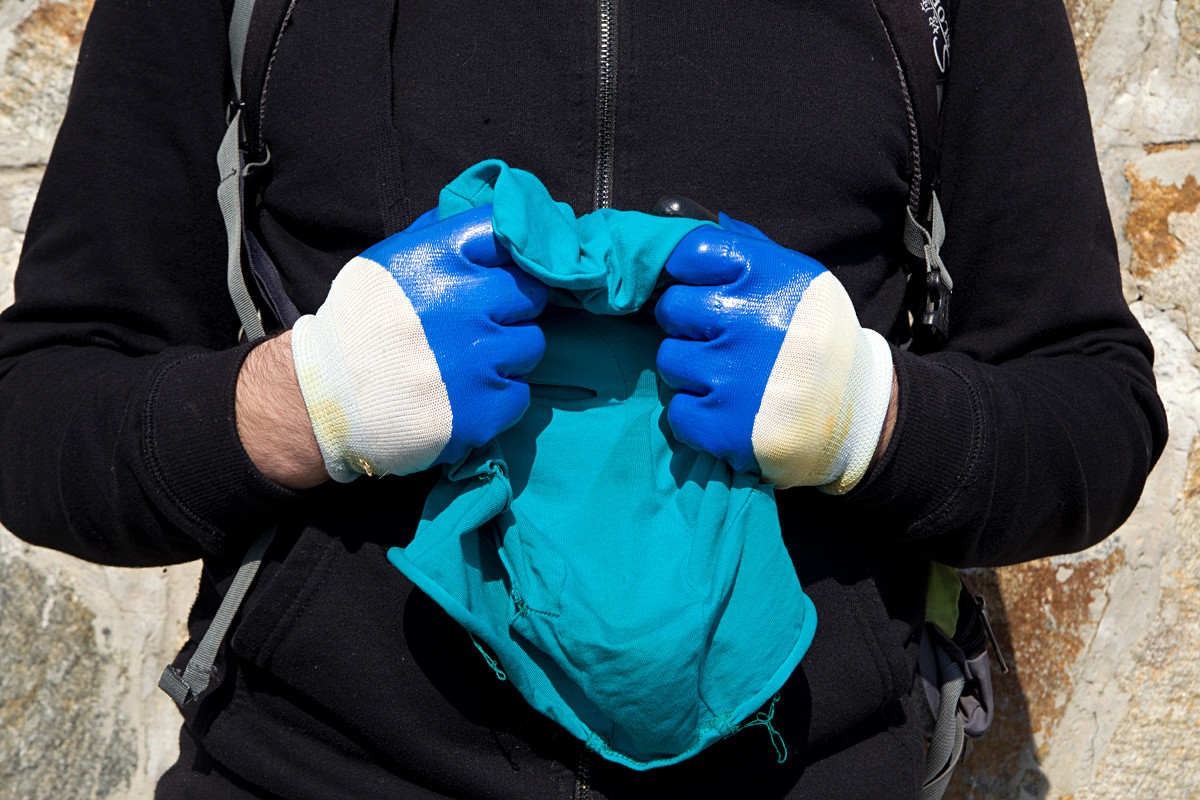 This mask was made by Chistoman's follower from Moscow.

But the most amazing incident occurred in December 2018, when he accidentally ended up on the TV show Secret Millionaire. The program’s guest benefactor, the owner of the Top Gun chain of barber shops Alexei Lokontsev, was so impressed by Artur’s dedication that he donated 350,000 rubles ($5,500) to the project, and asked him to remove his mask. Artur admits that he hasn’t spent the money yet, and has tried to take down all the videos in which his face was shown. He wants to be known only as Chistoman and is not looking for publicity for his real-life self. Incidentally, he continues to collaborate with Lokontsev – the entrepreneur has promised to help develop his business further, and even commissioned an artist friend of his to create a Chistoman comic strip. When the first part came out, fans were not too appreciative of the style, calling it “brutal,” but Artur hopes that the following installments will be better received. 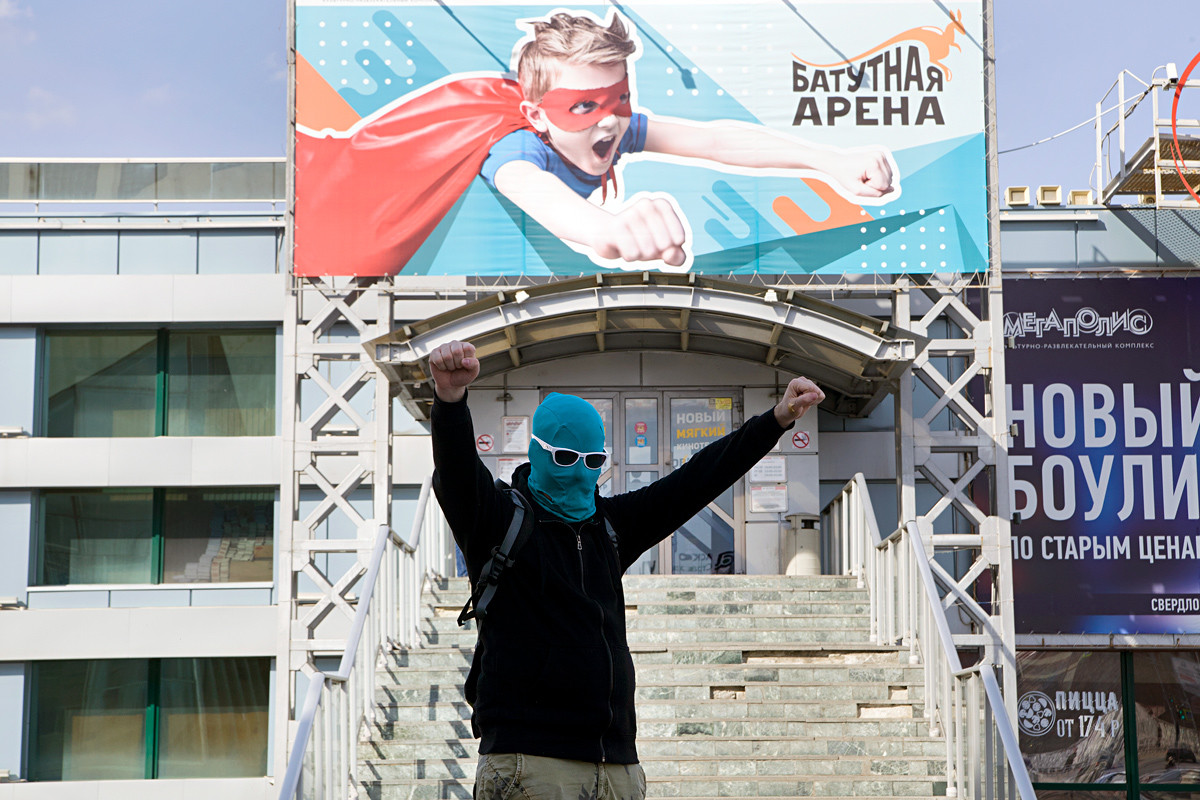 Artur doesn't want to save the humankind, he just wants people to stop litter everywhere around.

He does not earn money from his project. And although he has had co-branding offers from companies that make garbage bags, he prefers not to sell out.

More ‘cleanmen’ on the streets

In the summer, Arthur plans to organize a big cleanup event in Chelyabinsk. He does not favor Soviet-style subbotniks (“cleanup Saturdays”), since he wants to promote ongoing tidiness, not a forced cleanup once a year. 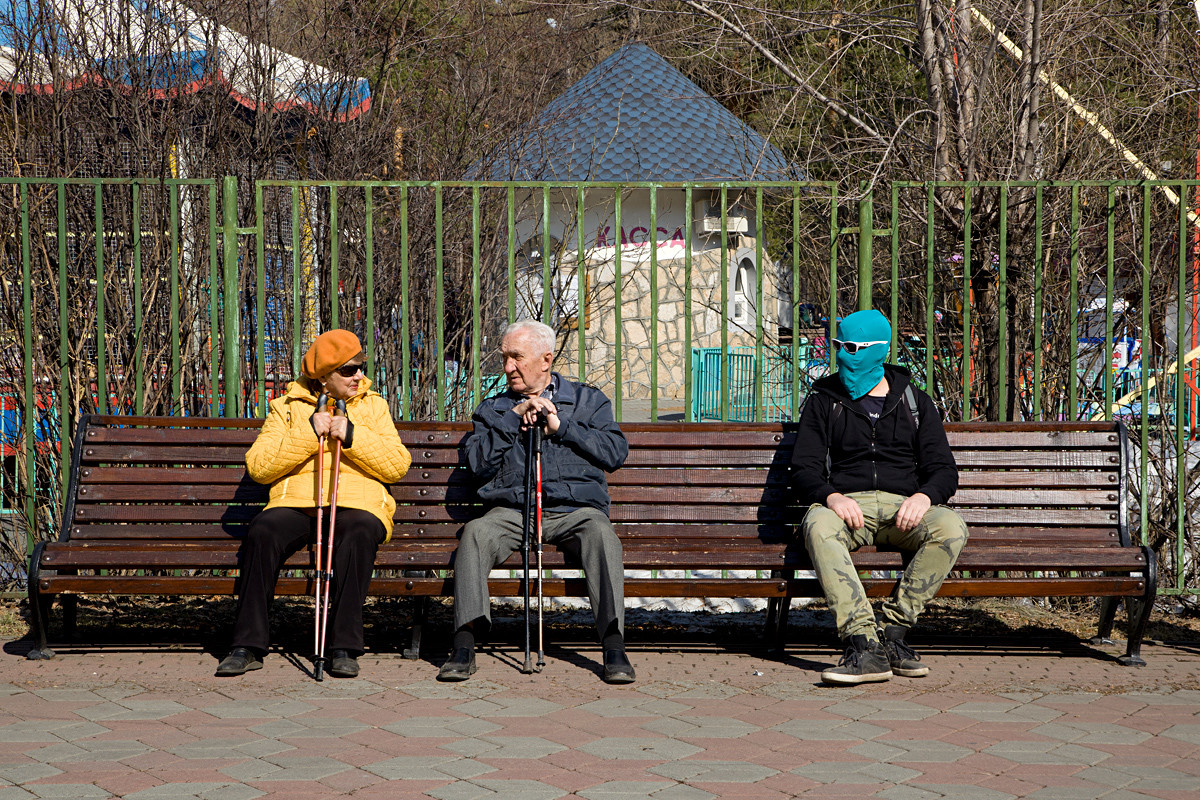 At the central park of Chelyabinsk.

“I think it’s important to be an active citizen and will be happy to see more "cleanmen" on the streets. But many environmental issues get swallowed up by politics, so I might end up running for the local duma,” he says. 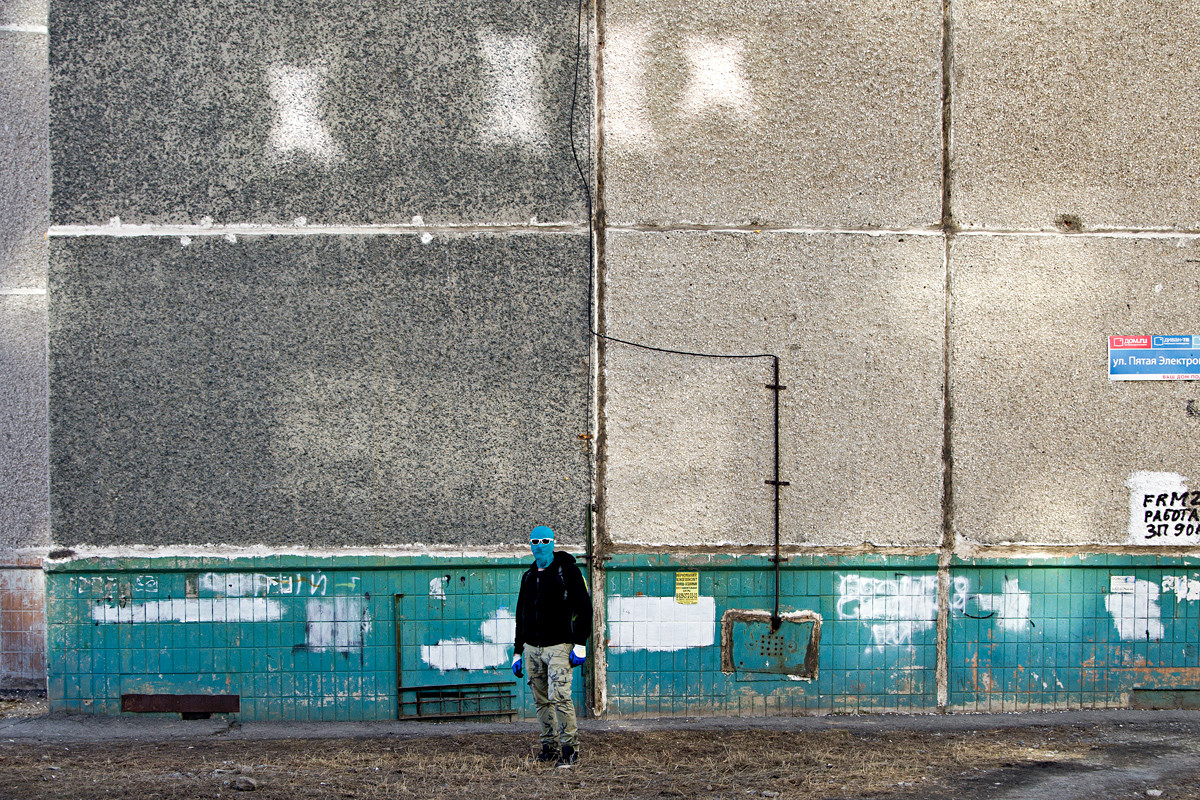 Artur would be happy to see more "cleanmen" on the streets.

Artur is not Russia’s sole environmental enthusiast. A couple of years back, a hero in an orange mask appeared in Biyisk (Altai Territory), but after just four “raids” he grew tired. Now Artur is in contact with activists from St. Petersburg, Kostroma, Yakutsk, and Perm – he considers them to be fellow superheroes and even set up a special chatline where they can talk about “superhero matters.”

Sometimes Chistoman ventures beyond his home turf of Chelyabinsk: he has conducted raids in Miass and Kopeisk, and not so long ago went to Petrozavodsk at the invitation of local activists. “There is a beautiful embankment there, but still we collected a fair amount of garbage. The problem is the same, because people everywhere are the same,” says Artur.