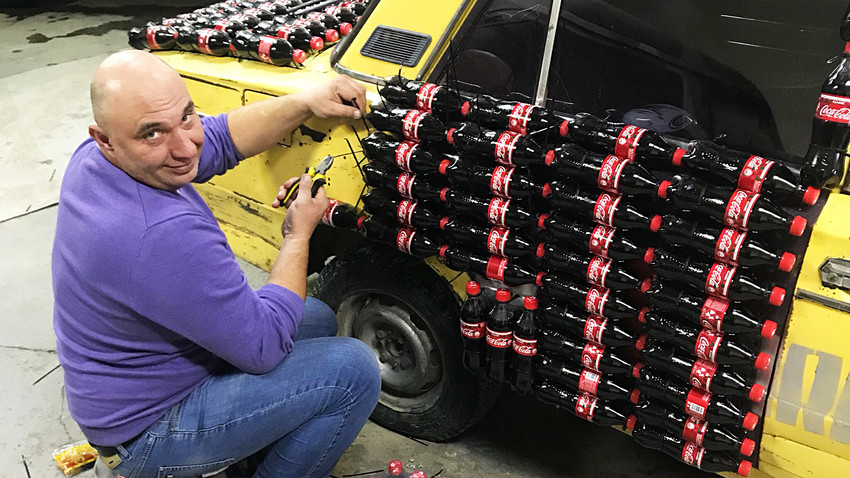 Garage 54
Mechanics from Garage 54 in Novosibirsk have been known to repair car bumpers using instant noodles and make Oka cars fly! They mainly do these customizations for fun - but also for "likes" and their ever-growing fan base!

Let's be honest, you've always wanted to know whether Russians use vodka instead of petrol in their cars or whether a Russian car can be turned into a barbecue grill? Well, you’re about to find out as Russia Beyond got together with the creators of the YouTube and Instagram channel Garage 54 to hear about their craziest experiments with cars!

The Garage 54 project first appeared in February 2016 when Alexander Lukyanov and Vladislav Barashenkov from Novosibirsk made a video showing them repairing a car in a garage and to their surprise it was watched by over 200,000 people! And so they decided to launch their own car channel. Now the Garage 54 team (54 is the vehicle code for Novosibirsk) numbers 10 people, and their videos are watched by almost 2.5 million subscribers.

Generally speaking, all experiments by these auto bloggers are crazy in one way or another. Once they had 10 hours to spare and spent the time going round in circles on a snow-covered field!

For their experiments, the bloggers usually buy Russian-made Zhiguli and Oka cars on the internet. Alexander says they can withstand any abuse. For example, will a car start if, instead of putting electrolyte into your battery, you pour in something… stronger? Well, if you guessed this earlier, you were right! A car starts brilliantly on vodka, but wine and cola don’t work well at all.

Garage 54 shot their first videos in Vladislav's garage, but now they are even constructing a special studio to make their videos. However, for some experiments, the team often goes to the countryside. What do you think about relaxing at the dacha like this: turning a Zaporozhets car into a motor boat and going fishing? These guys make it look effortless!

In this video the bloggers decided to find out what happens to a car if you bury it in the ground for a year and then dig it up again! They sacrificed three vehicles: a Zhiguli, an Audi and a Toyota. All three cars failed to come out in any kind of working order! "Afterwards we wanted to give the cars up for recycling. We washed two on the spot, loaded the third one on a tow truck and then spent ages looking for a car wash that would agree to clean it," says Alexander. In the end, they did find one.

Instant noodles save the day on many occasions! But can they save a broken car bumper? Yep, you bet they can! The guys at Garage 54 used two popular noodle brands and one cracked bumper in this experiment. And although spices were not needed, the end result looked great, but it simply served to ‘paper over’ the damage!

Remember that time you had a somewhat deflated tire and no pump at hand? Well, all you needed to do was go to the nearest store and buy some cola! The guys at Garage 54 managed to successfully test out the theory! You don't believe it? Here's proof!

The guys also tried to see if adhesive tape could be used instead of tires! A bizarre suggestion, no doubt, but just two kilometers of adhesive tape later and they were driving their car with confidence and ease!

Do you remember the CatDog animated series? Or the Push-Me-Pull-You from Dr. Doolittle? The mechanics at Garage 54 decided to do the same here, but using Lada “Vosmerkas”. The two cars were cut in half using a disc cutter and then welded together! The result was beautiful, but rather pointless! How’ll the drivers agree which direction to go?

Garage 54 also decided to substitute tires for wood! Why do you need wheels if you have a few of sturdy logs? That's what the mechanics thought. So they simply cut the right size using a chainsaw! We suppose it’s kind of convenient, seeing as you no longer have to worry about winter tires!

An Oka car can even fly if you really want it to! The bloggers managed to launch one into the air with a hot air balloon! But things didn’t end as they expected! "It turned out that every hot air balloon has an identification number plate and the pilot who agreed to lift the Oka car into the air was quickly traced and ended up with around seven fines!" Alexander admits.