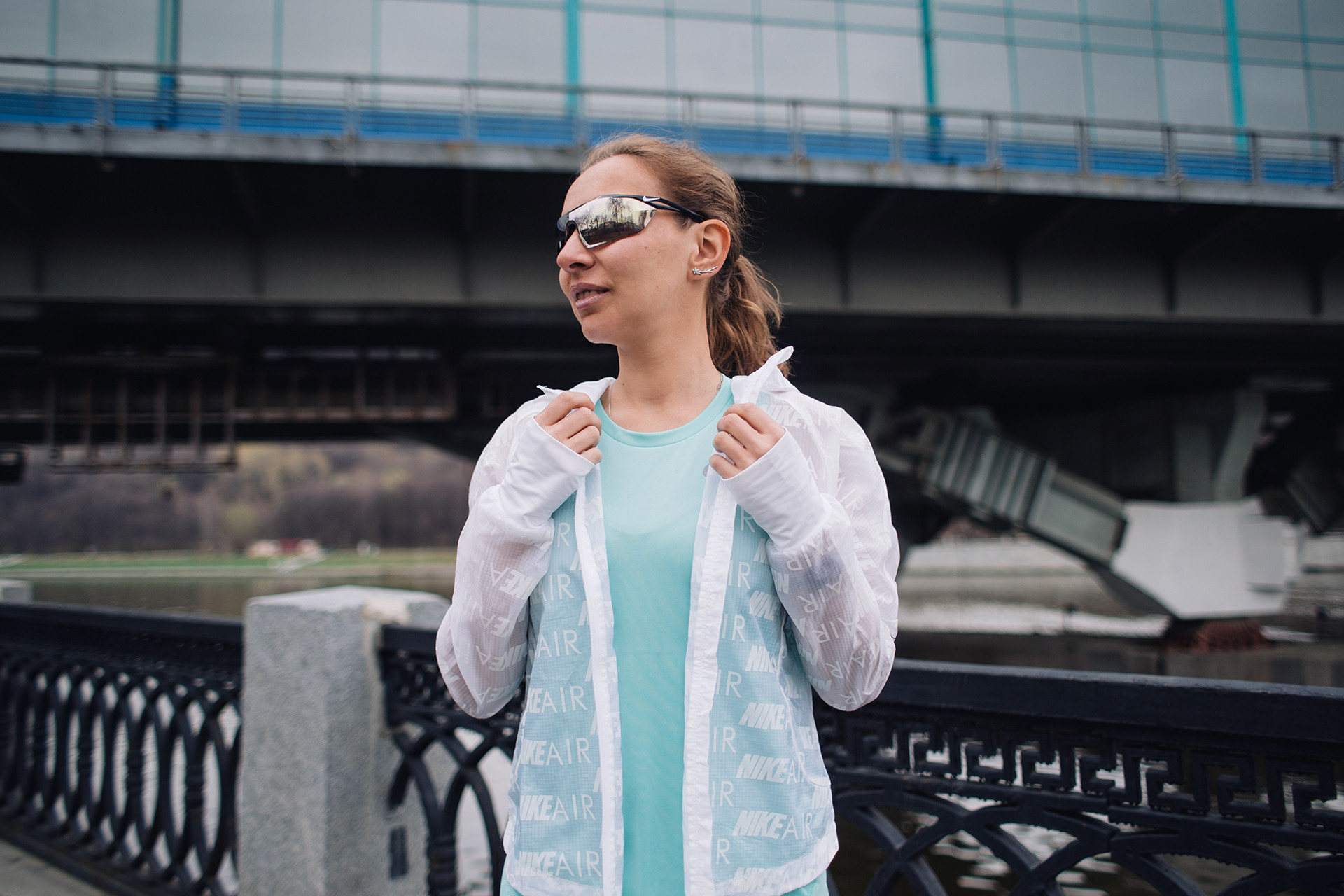 Ekaterina Zykova
Elena, who is 34 and blind, has completed the Berlin half marathon, starred in a Nike commercial and hopes to soon take part in a 1,500 km cycling race. Her goal is to prove that she is in no way different from other people.

A small and seemingly defenseless young woman is turning in different directions, groping for the marble wall of a Moscow metro station. In her other hand, she has a cane, which from time to time brushes against the shoes of people passing by.

Every day, Elena travels to work from Moscow to Troitsk (which is 50 km away) and always tries to avoid rush hour. At first, one might think that is because she is afraid of being knocked down by the rush-hour crowd of passengers hurrying to work. But once you take her hand to guide her to the exit, you realize that it is her who can overtake and knock down anyone. With her speed of movement and confidence, she immediately strikes you as a Wonder Woman of sorts!

Lena herself rejects this title: she simply works as a rehabilitation teacher in a center for people with visual and hearing impairments, raises her son, and in April ran her first half marathon. She also became a heroine of the Nike ‘Never Ask’ video project. As part of the campaign, she explained that the most important thing in achieving success is – listening only to yourself!

“I think 12 years is the ideal age for losing sight,” says Elena in a quiet voice, turning around to the steps of each person passing by. We are sitting in a busy cafe.

It was at that age that Elena began to lose sight as a result of retinal detachment. No-one knew what caused the illness or how to cure it either. At first she thought that her sight would soon restore itself or that at least new technologies would emerge that would bring her back to her usual life. However, as time went on, she had to get used to living and learning in a new way - in a special school for the blind. 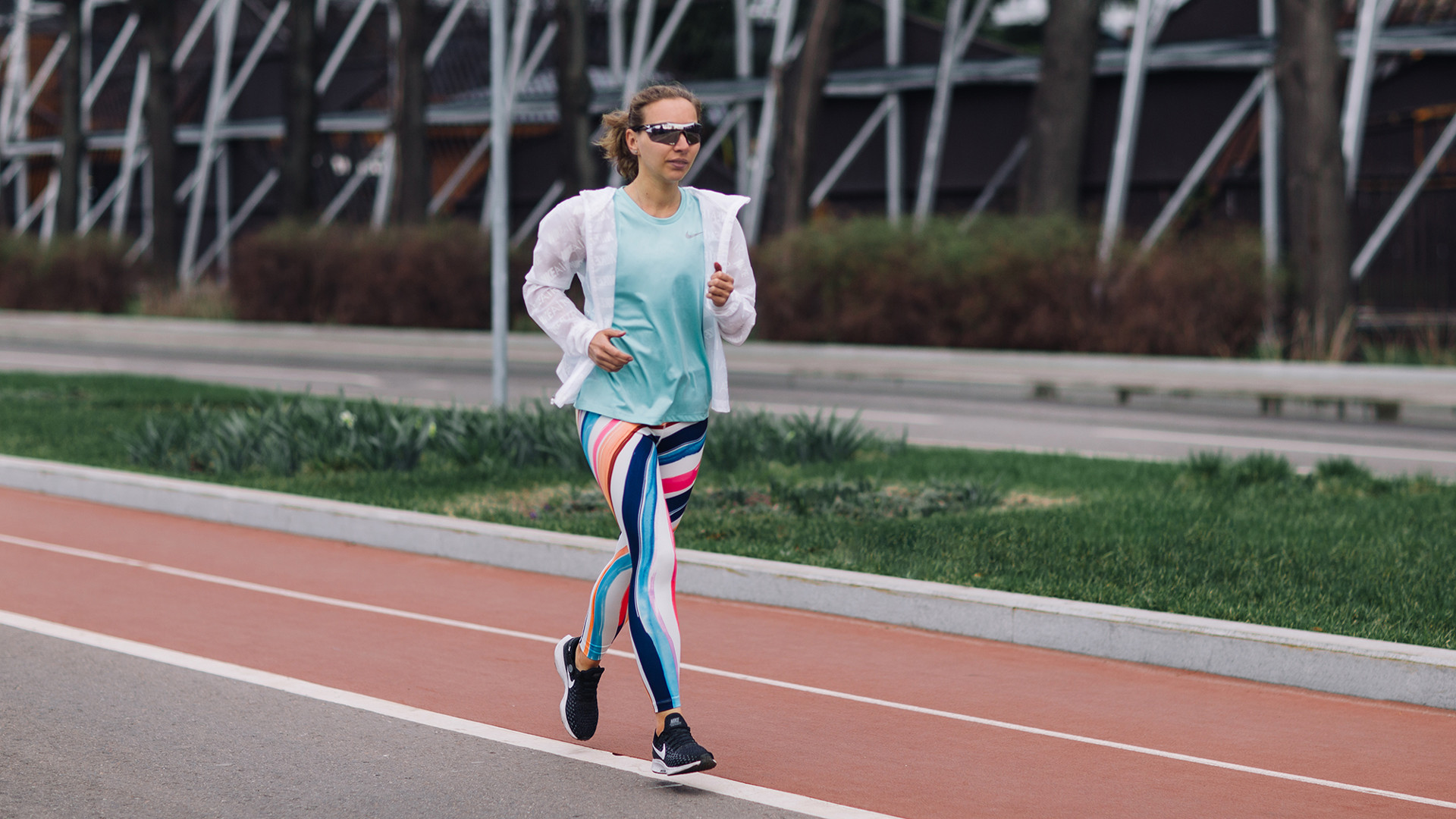 We are brought the menu. I suggest reading it out loud to her. But Elena just orders a cappuccino, refusing to listen to the list of 15 drinks. I feel a bit awkward.

“I already had a rich visual experience. At the same time, I had nothing planned for adult life, which means I could change the direction without any loss,” Fedoseyeva argues.

But her life wasn’t transformed by the new school or the philological faculty of the Orthodox University, or even by getting a massage therapist certificate (a common occupation chosen by the blind). It changed when she was introduced to the Marathon in the Dark project, set up by the Sport for Life charitable foundation, whose volunteers – also called leaders – teach blind people to run.

“I had my first training session five years ago. I did not like sports and always had a certificate exempting me from PE lessons. Of course, those were the worst 300 meters of my life,” Elena recalls. “It was tough from a physical point of view – my pulse immediately began to race, I instantly went red [in the face] and could not breathe!”

Running ‘in handcuffs’ and stupid questions

Two young women, their wrists tied together with an elastic band, are running through a park early in the morning. Each has an AirPod in one ear, listening to a Beatles song. Elena has an Apple Watch on her wrist, which from time to time says her pulse data, the distance covered and other indicators with the help of the VoiceOver feature.

Training sessions like these take place several times a week with different leaders. 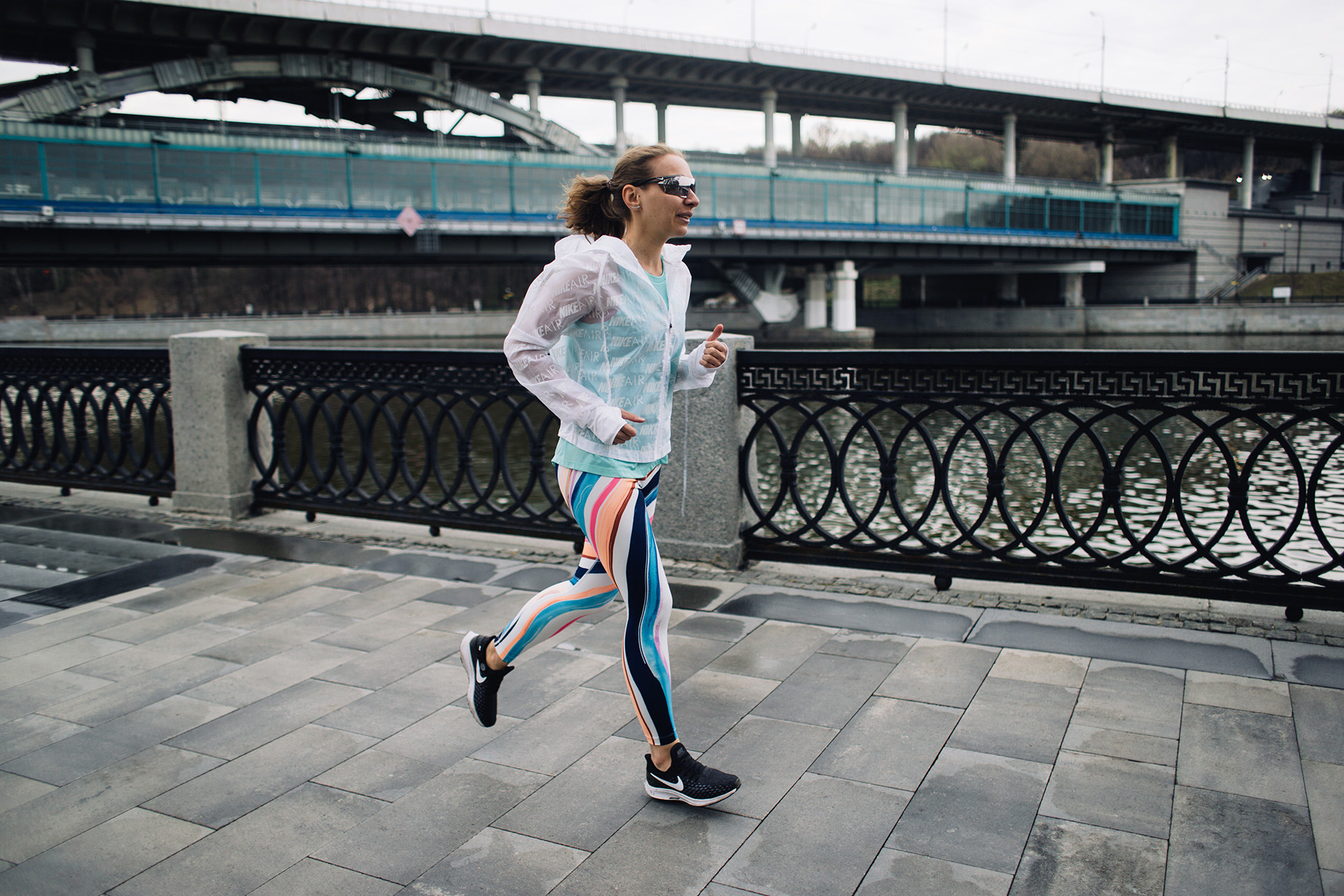 “Muscovites still get surprised by this sight. They start running after us, asking us why we are wearing 'handcuffs', do we find it more comfortable running that way, etc. Sometimes they try to run between us, not even noticing the elastic band. It does not even occur to them that this is a blind person running with a leader,” says Elena, who is not amused.

She combines running with double-bike workouts and swimming - also with the help of an Apple Watch. After a break during her pregnancy, Elena set herself a goal to run a half marathon. She chose Berlin, because she would have to spend some money on preparations for the trip and later would not be tempted to drop out.

Immediately you ask yourself how a blind person can travel and get pleasure from it – after all, even now she cannot see the pictures on the walls in the cafe or the waiters in their funny chef hats.

While Elena explains to me, as if to a little girl, that there are many museums in the world with 3D paintings for the blind and that friends describe everything that happens around, I notice mascara on her eyelashes. I feel even more embarrassed: if she trains every day, uses the metro, is raising a child and applies makeup herself, then traveling to another country surely isn’t much of a challenge for her!

Elena recalls that she felt the sun shining outside in Berlin. According to Siri, the temperature was 21 degrees Celsius. Ideal weather for a walk or a picnic, but not for a ‘light’ 21 km run! Nevertheless, around 30,000 people from all over the world had registered to run in the half marathon. She remembers the live music drowning out the chants by their supporters.

“On the 19th kilometer I began to feel tired,” Elena admits. “However, at that moment a mutual friend came to the fan zone. He started shouting, ‘Come on, come on! Only two kilometers left!’ That was the motivation I needed to get to the finish line!"

In the future, Elena plans to run a full-fledged marathon, preferably in Berlin or Paris. In her opinion, it is much more interesting to go to another city for a race than to go to a bar in the evening. She’s also training for a triathlon and someday wants to do a 1,500 km cycling Challenge. 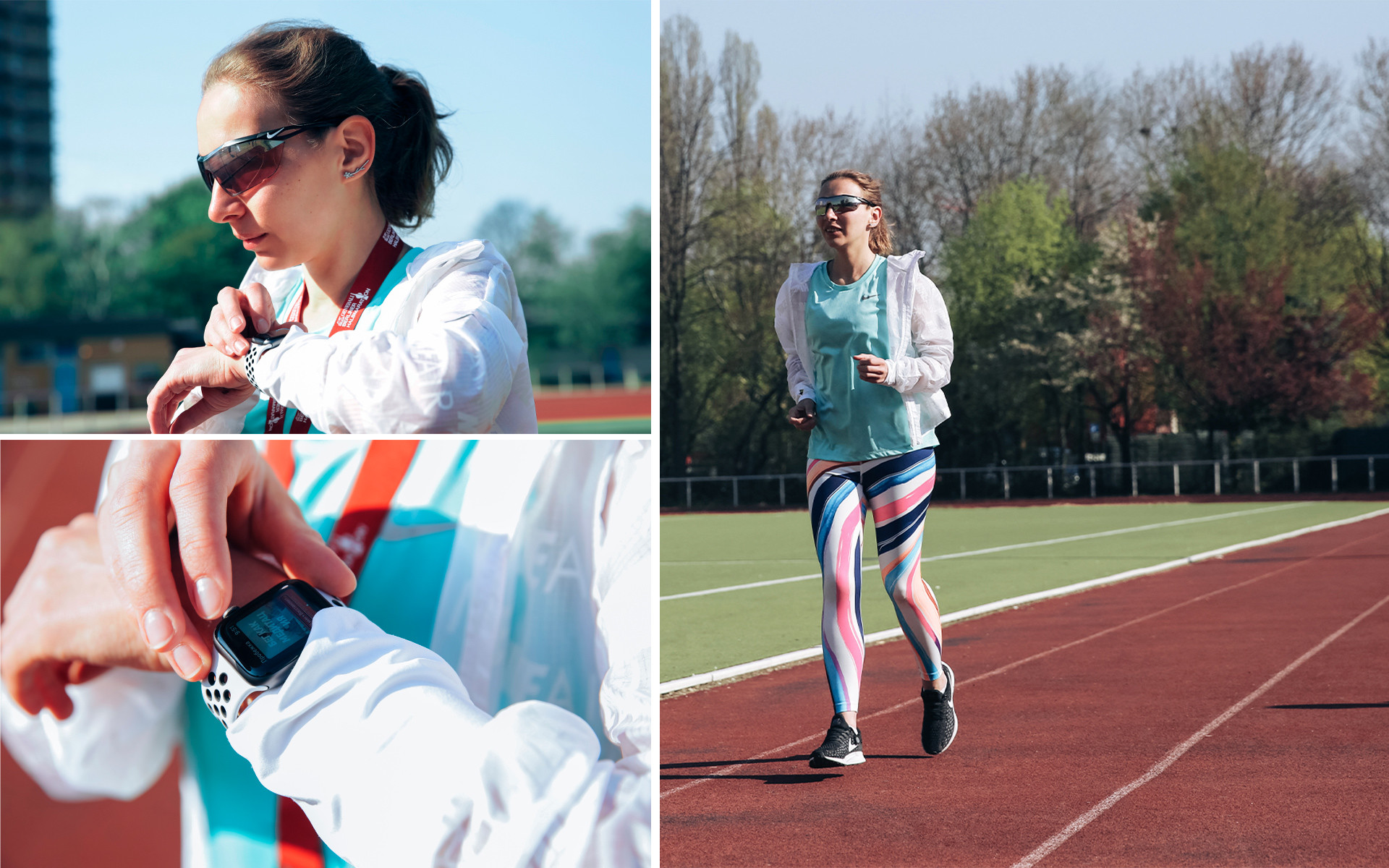 In contrast with these ambitious plans, Elena constantly gets asked stupid questions, and not much better than the ones I asked her! For instance, why she walks without a guide dog, why she has still not had an operation or how she is let out of the house on her own in the first place.

“People on the metro, seeing that I use an iPhone with a dimmed display, always tell me something along the lines: 'Are you looking for the button? Your phone is turned off, the battery is dead.' So I have to explain to them that everything is fine, that I am just saving the battery, and that the voice assistant tells me everything that happens on the screen,” Elena complains.

And then I ask another stupid question: does she use Instagram? Did she post any pictures from the marathon online? Lena pulls out her iPhone with tangled headphones and scratches the screen with her fingers, like a kitten. Two minutes later, she sends me a link to her account with the handle ‘Snork Maiden’, a character from the Moomins. My embarrassment hits the coffee house ceiling. 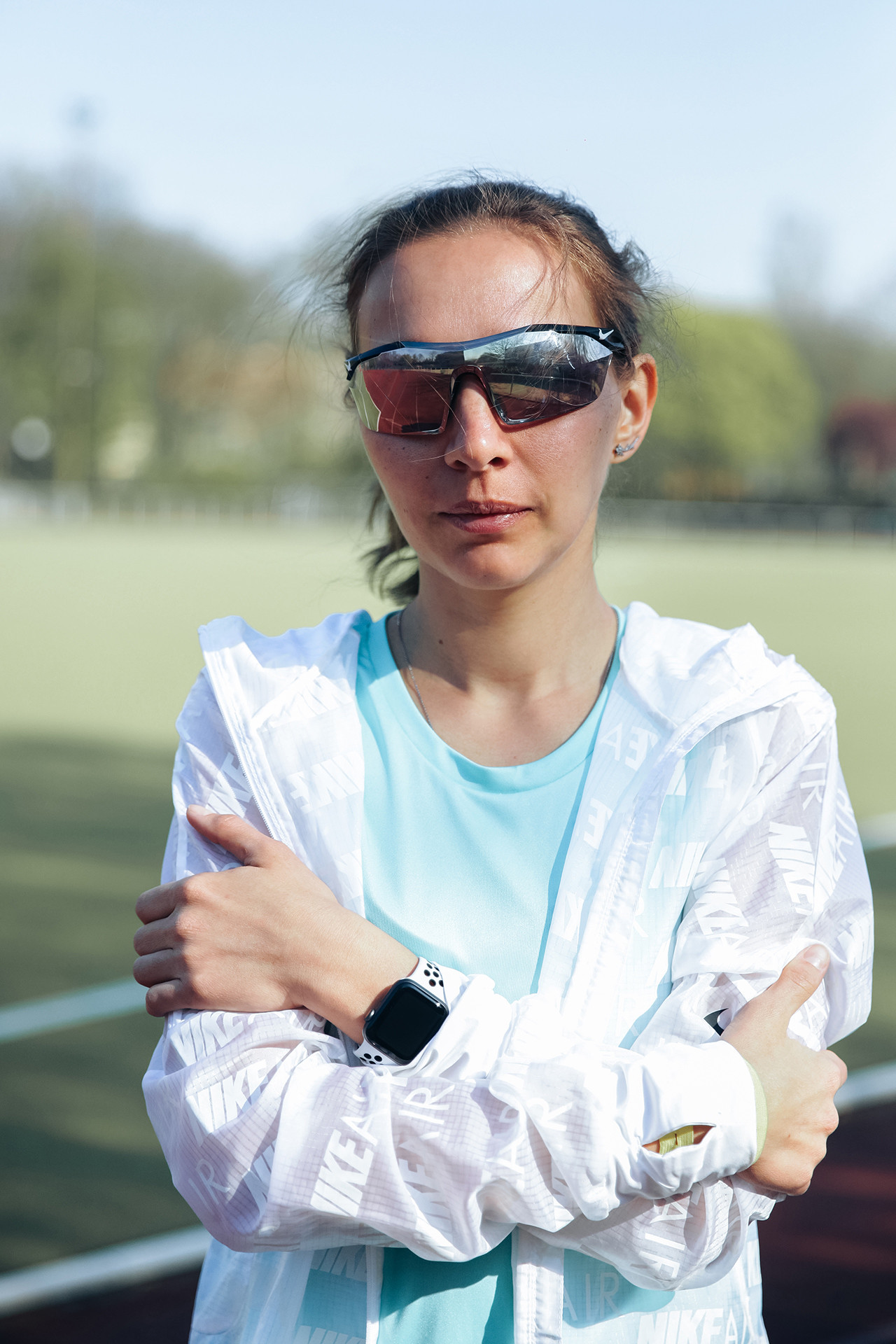 "Whether we like it or not, people make conclusions about others on the basis of just one person, usually. This is particularly evident when it comes to disability. We see one blind person who doesn’t leave the house and we immediately think that all the other blind people are like that," Elena laments.

“You are what people think of you with your form of disability. In my case, this is not just a waste of time and effort. This is a path to creating an inclusive society so that there are fewer ridiculous questions about the blind,” she concludes.