Why did Billy Joel destroy his piano when performing for Russians? (VIDEOS)

Culture
Daniel Chalyan
Billy Joel
Many of you are familiar with the musical genius of Billy Joel. But have you ever heard the story of Billy’s contribution to bridging the cultural gap between the United States and the Soviet Union? The night he flipped out and destroyed his piano will forever be etched in Soviet memory.

Billy Joel Has a Tantrum, wrote the New York Times of the epic, July 1987, show in Moscow, attended by over 20,000 people, one that would have Billy preside over a major cultural shift in Soviet-American relations. The man was the only person at the time who accepted an invitation from our Communist party to come and play a show for Soviet music fans. Not so much his fans, but fans of Western music, in general.

The USSR was experiencing a long-awaited thaw in relations, and Mikhail Gorbachev (he and his wife were avid Elvis lovers themselves) thought a string of concerts would be a great idea to get this new reset in relations off to a good start. 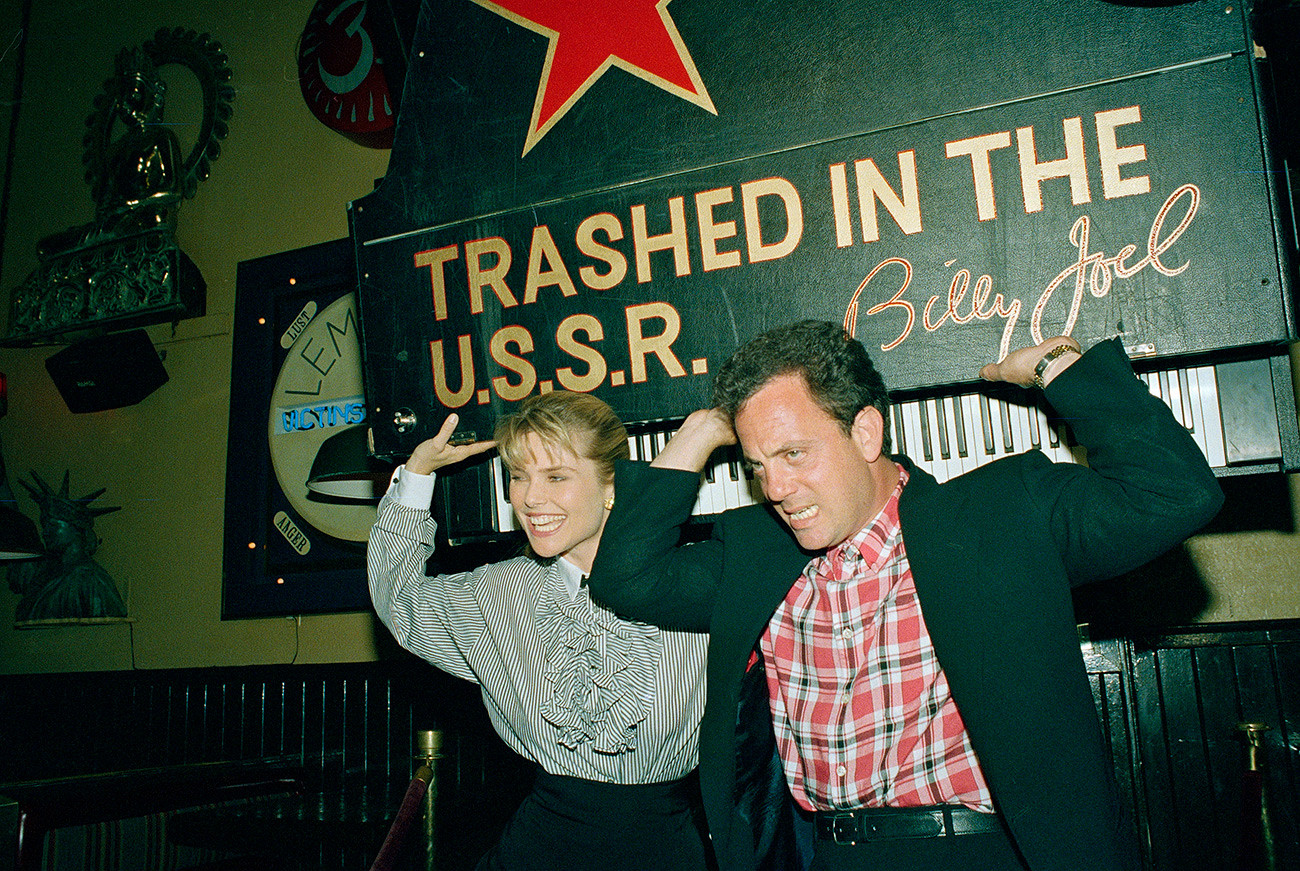 Rock star Billy Joel is helped by his wife Christie Brinkley, as he pretends to lift a piano suspended from the ceiling at the Hard Rock Cafe in New York, June 3, 1988. Joel, donated the piano he used on his concert tour of the Soviet Union last year, to the cafe's collection of memorabilia.

Despite the Iron Curtain (called that for a good reason), Russians did have access to Western music from as early as the 1960s. One popular tactic practiced by bootleggers was fishing for x-ray scans in hospital dumpsters, and recording vinyl records right onto them, to then sell on street corners illegally - and with the threat of terrible punishment constantly hanging over their heads.

However, even toward the end of the Cold War - in practice - the all-out cultural exchange was still in its infancy. Carlos Santana, Stevie Wonder and Bruce Springsteen all declined invitations to play. Nobody wanted anything to do with the Soviet Union. And who could blame them? It was uncharted territory, both geographically and culturally. You just didn’t know what to expect.

But for a short-tempered boxer/musician from Long Island, the chance to perform for the Ruskies was one he could not pass up on, as we find out in 2014’s A Matter of Trust documentary that chronicles his USSR visit.

The grueling run-up to the Soviet tour

Joel was strung out. The USSR was to host the last of the shows of a grueling year-long tour. On tour with him were his then model wife and their infant daughter, as well as dozens of crew and musicians. Not only that, he put up $2,5 million of his own money to fund the series of technically demanding shows - six in total; money he knew he likely wouldn’t get back.

His first point of arrival was Tbilisi, the capital of the Soviet Republic of Georgia. The Georgians didn’t disappoint: after a night of partying with food and wine and vodka, poor Joel was hoodwinked into an impromptu performance at the Georgian National Opera, which featured a sub-par PA and Joel having to really shout in order to enunciate some of the lyrics and reach the back rows. 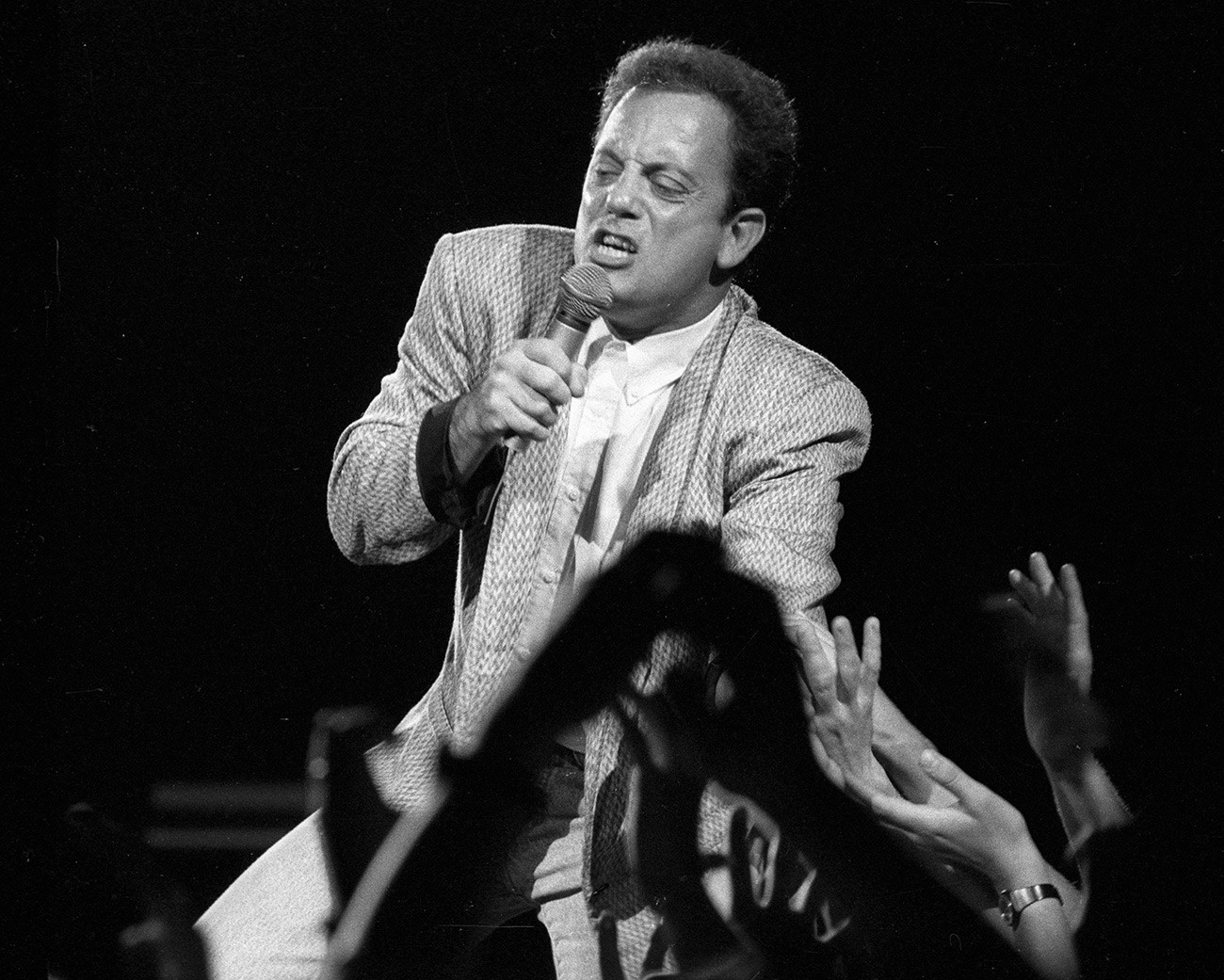 On top of being broken from 11 months of touring, Billy had now almost torn his vocal chords, and was in a sorry state - and certainly in no condition to pull off a stadium show in Moscow or St. Pete. Over in Russia, they quickly took him to a doctor, who inserted electrodes in his throat and handed him a box of Tic-Tacs.

Joel knew the pressure was on even before the trip. Everyone in America who had anything to do with music journalism hated the idea. They thought he was a lousy ambassador for rock music, and wanted somebody else to be America’s representative to the USSR. Joel, to his credit, tried to play this down, and claimed earlier at a presser in May that, “I’m not a politician… I'm going there as a musician. I want to get more communication going between us. People over there like pop music, they like rock and roll."

Finally, July 27 arrived. It was time to do the Olimpiskiy Stadium show in Moscow. Billy was grumpy and his throat was killing him. He would almost snap at people trying to ascertain whether he'd be able to pull off all the high notes in the huge setlist he had planned. He didn’t know what to tell them.

What awaited him once he took the stage was a bigger problem: all of the front rows were filled with members of the Soviet ‘politburo’. The men were as stiff as a board and really difficult to please. It’s anyone’s guess whether the Russians didn’t like the music, or simply tried to act in accordance with the view that Western music was a decadent influence on the USSR (a view, no doubt, held by some politicians of that era). It became apparent to Joel during the performance of ‘My Life’ and ‘Angry Young Man’... which is easy to imagine, because listen to how amazing the song is. Joel's skill as a pianist is contagious.

Thankfully, whether tired, or simply disinterested, many members of the Party got up and left their tickets to the mortals behind them. Now, with proper pop music fans up front, the party could begin. However, this was where the second problem emerged. Something was off: whenever the bright lights of his crew were turned away from the crowds, Joel could see the audience go insane and really be in the moment. The second they put them in focus, however, everyone froze - seemingly in fear of whatever kind of punishment awaited the boisterous among them. Observe 1991's Monsters of Rock show in Moscow - featuring Metallica, Pantera and a host of other big names - showing the extent of Soviet crowd control tactics. With more than a million people in attendance (!), the situation was pure chaos.

In the middle of his performance of ‘Just a Fantasy’, Billy had really had enough, and started lashing out at his crew - as well as the fans, whom he said had begun to resemble “an oil painting”. ''Why are you here?'' he screamed. ''You obviously don't want to be here!'' Billy shouted at the crowd that, in all fairness, wasn’t that different in its behavior to any Soviet rock show at the time: this was how people partied. And Joel hadn’t been made aware of this.

By the second verse, the singer shifted his anger to the film crew, inserting pleas to stop filming the crowd in-between the lyrics: "When am I gonna take control get a hold of my emotions," he sang, visibly agitated. "Stop lighting the audience!", he screamed during a brief interlude. "Why does it only seem to hit me in the middle of the night," he continued, followed by an enraged "STOP IT!" to the crew. The last line was cut short, interrupted by Joel going berserk on his Yamaha stage piano, with no one any the wiser: "You told me there's a number I can always dial (for assistance)"... and he was done: grabbing the piano by the base and flipping the instrument, he proceeded to destroy it with flying kicks - and his mic stand. The crowd just went on smiling, thinking it was all part of the show. The Soviets must have thought they finally understood why rock’n’roll shows were all the rage in America: you could see a man go nuts and kill his equipment on stage for 5 rubles.

Joel later told the Associated Press: "I've been on the road for 11 months… It's difficult. I'm running ragged."

Against all odds, that cathartic moment proved to be somewhat therapeutic for Billy. Miraculously, he was “healed”. The rest of the shows didn’t just go without a hitch: Joel had finally synced with the vibes of his audience, and become so liberated with it that he’d be taking his shoes and socks off, jumping off-stage and crowd-surfing while draped in American and Soviet flags, and all manner of other antics. He became an instant favorite with the Soviet people. So much so, that scores of chairs were destroyed - some 200 at the Moscow show alone.

By the end of that tour, Billy had fallen in love with the country, and they with him. Not only that, his visit had caused an immense cultural stir. His beautiful song 'Leningrad' sums up his feelings about growing to love the Russian people. In it he retells the stories he'd heard on tour, and remembers his own upbringing as a child of the Cold War.

Metallica, Bon Jovi, Motley Crue, Pantera (yes, the heavy Pantera!), Scorpions, Elton John, Jean-Michel Jarre and dozens of others would quickly follow in Joel’s footsteps. But it was him who set the tone of that cultural shift and paved the way for them.

In 1992, the Berlin Wall finally came down. It’s considered to be the result of the work that was put in during the 1985 Geneva Summit, but these soldiers of culture in the final years of the Soviet Union, surely had a part to play. It was simply too late to do anything about art seeping into the USSR from beyond the Iron Curtain. It’s hard to guess how many more years it would have otherwise taken were Mikhail Gorbachev not a fan of the policies of ‘Glasnost’ and ‘Perestroika’. And rock music. At least some of us like to think so. 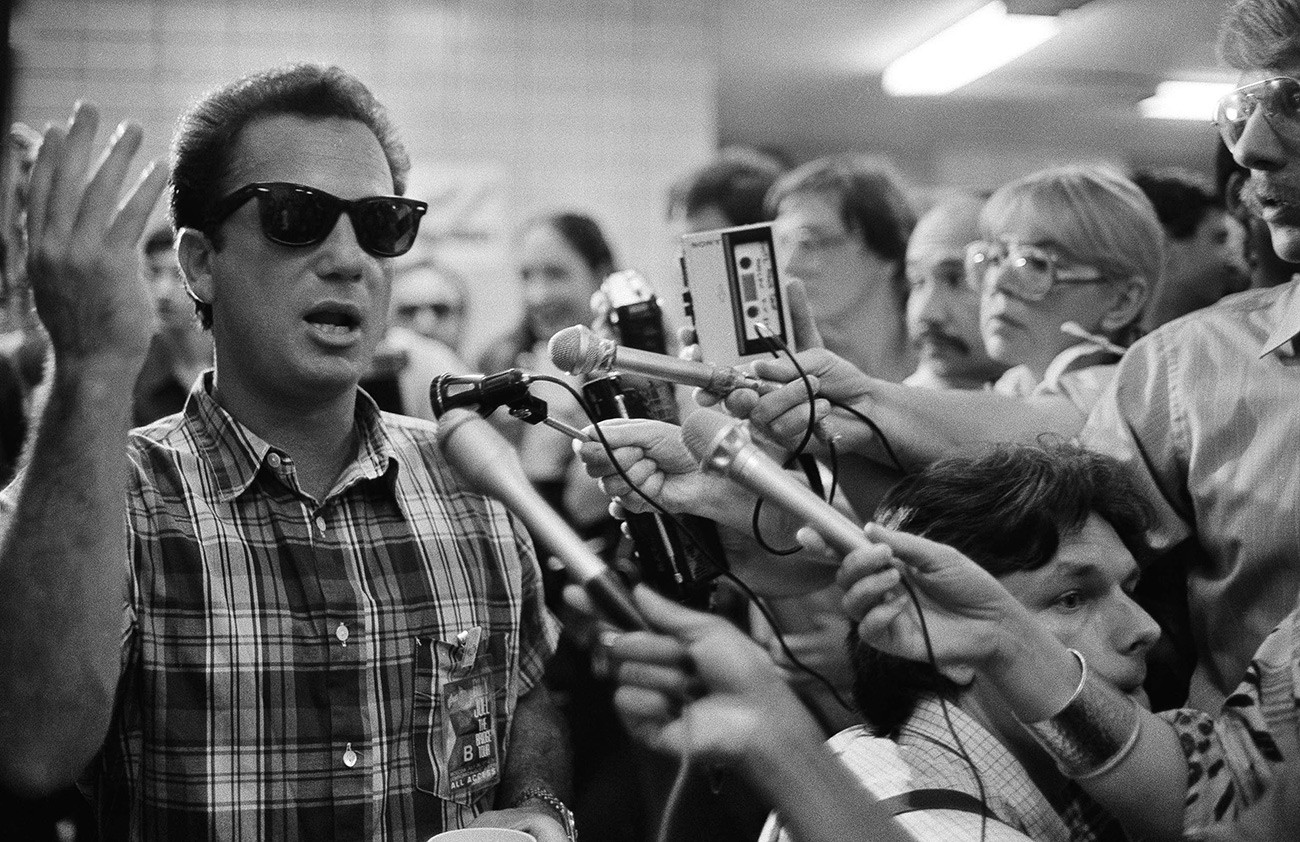 American entertainer Billy Joel answers questions backstage in Moscow, July 26, 1987, before the first concert in his six performance tour of the Soviet Union. He spoke of his visit to the grave of the famous Soviet musician Vladimir Vysotsky on the anniversary of his death on Saturday.