These ‘gurus’ offer $550 courses to pick up Russian girls 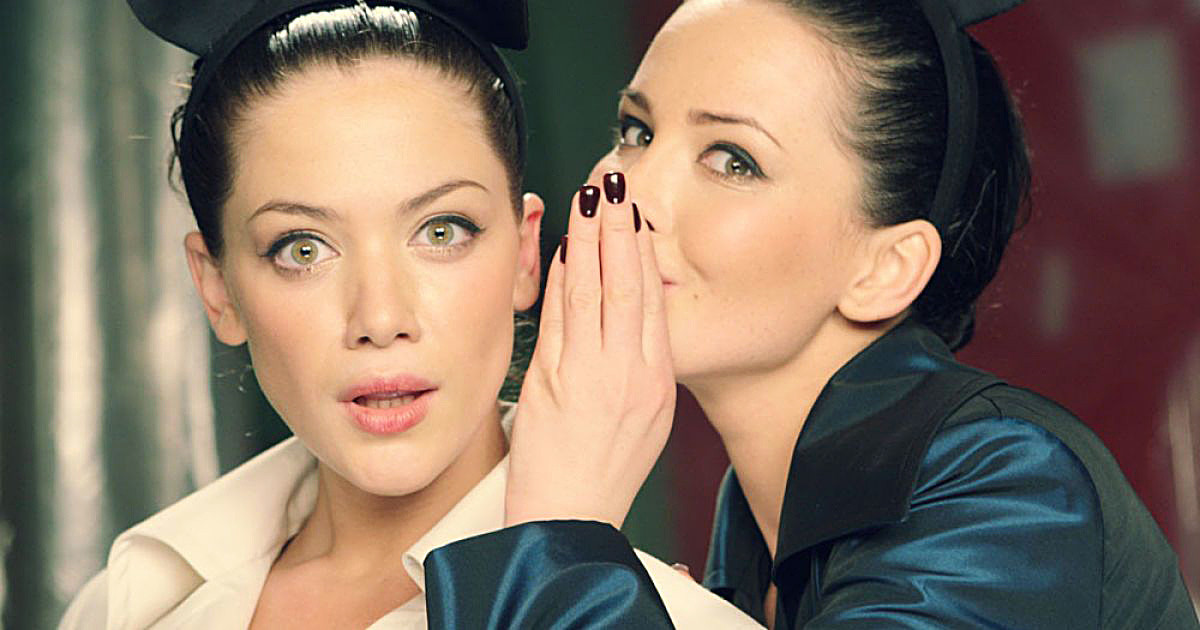 NIKITA/mamamusic
Who attends pick-up classes in Moscow? And why? (That one you can probably guess).

Ilya asks for the phone number of another guy, Nadir, who starts to play hard-to-get: “I’m not really sure if I should…”

This is not a typical pick-up scene in Moscow, but a men’s training course in the art (science?) of seducing women. Men meet up in groups to hone their skills in conquering the fairer sex. Participants believe that such training will radically alter their lives for the better.

The small office is packed to the hilt — just over 30 wannabe studs. The guys divvy up the last free chairs, chatting cheerfully as they wait for the appearance of the coach, who they believe will wave a magic wand and put an end to all their love-life problems. 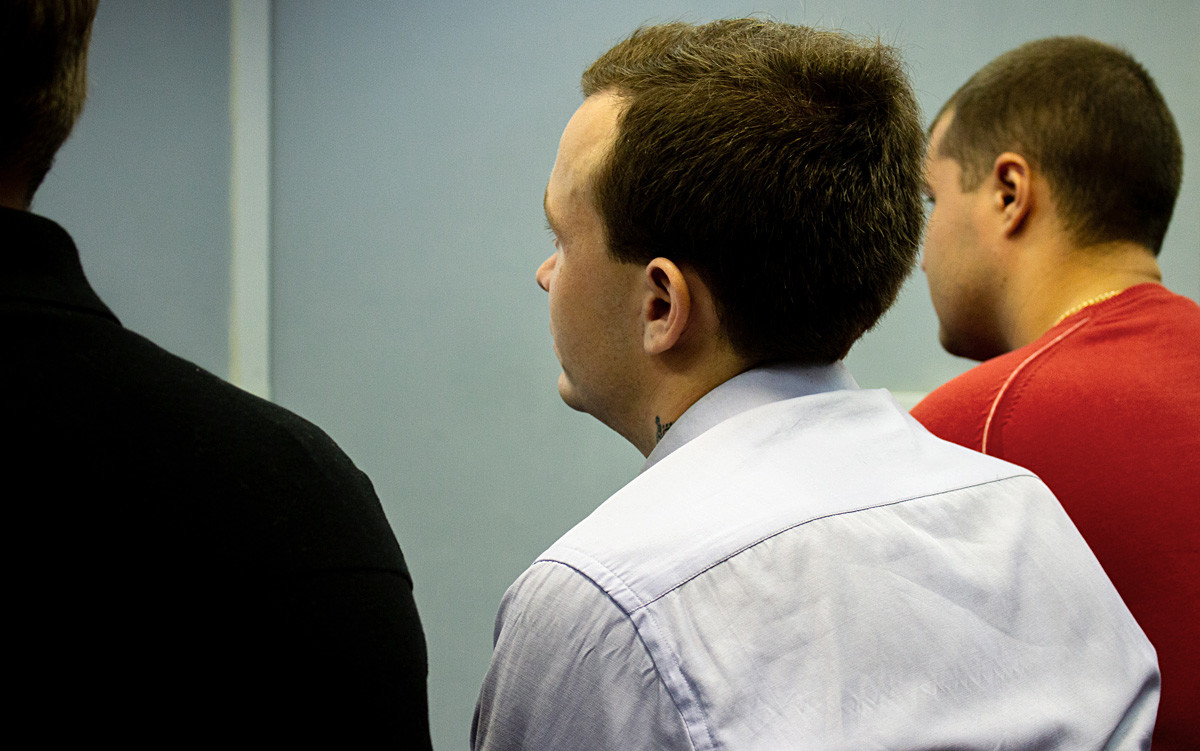 The small office is packed to the hilt — just over 30 wannabe studs.

The ages range from 18-year-old students to 45-year-old bank employees. Contrary to expectations, all the men look well-groomed and speak with confidence. How can they have a problem communicating with women, one wonders?

Mikhail, 30, is back after a ten-year hiatus. “I took a basic course when I was 20. The first time I learned how to chat up girls. Now I’m here to refresh my skills and find the right woman for a relationship, to acquire such magnetism that she can’t resist,” says Mikhail. 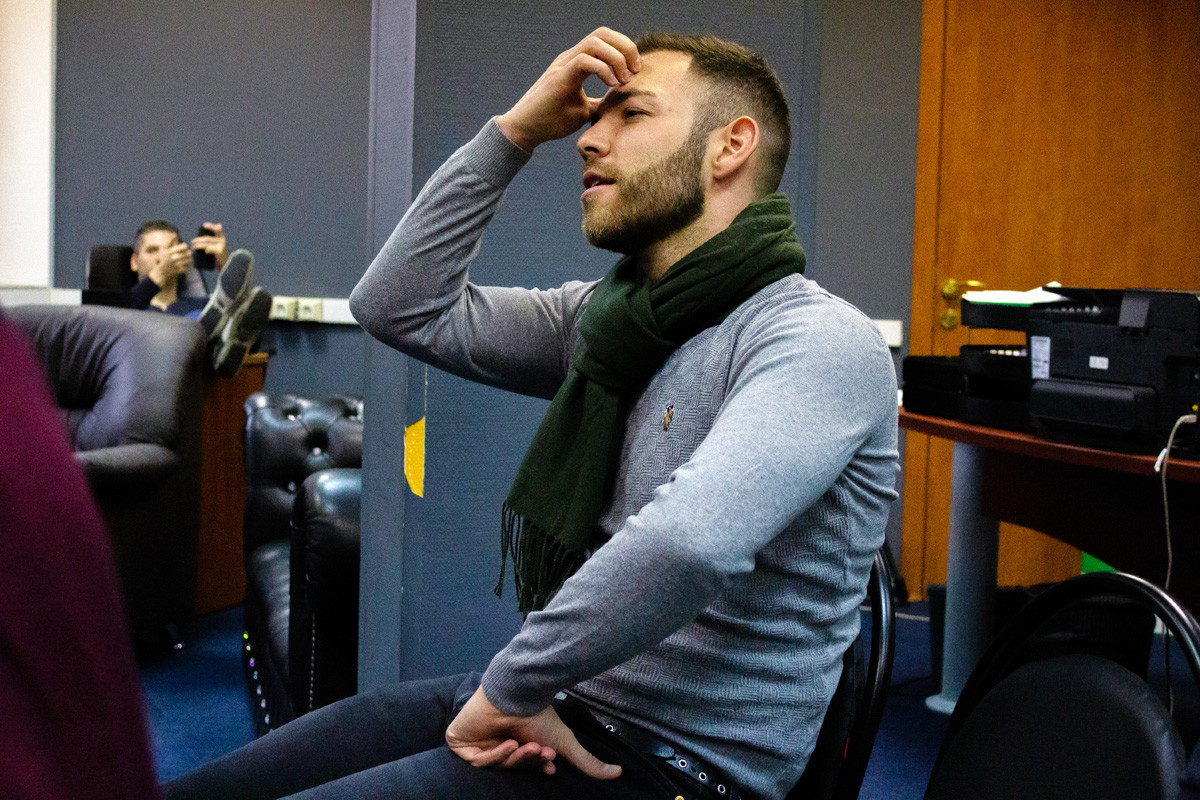 Mikhail, 30, took a basic course when he was 20. He returned 10 years later to refresh his skills.

But everyone has their own reason for attending. Some come here to get over their fear of asking girls for their number, others to avoid being friend-zoned for the zillionth time, still others to survive the pain and humiliation of divorce. There are as many goals as participants. Some believe in love and are looking for the One; others want to play the field, only do it more efficiently.

The way of the seducer

At long last, the seduction coach enters the room. Denis Shalnov is 41 years old, 16 of which he has been a professional “lurve” guru.

“Denis was called to follow the way of the seducer back in high school,” says his personal page on the website of the Russian Model of Effective Seduction project (RMES), which he joined in 2003. 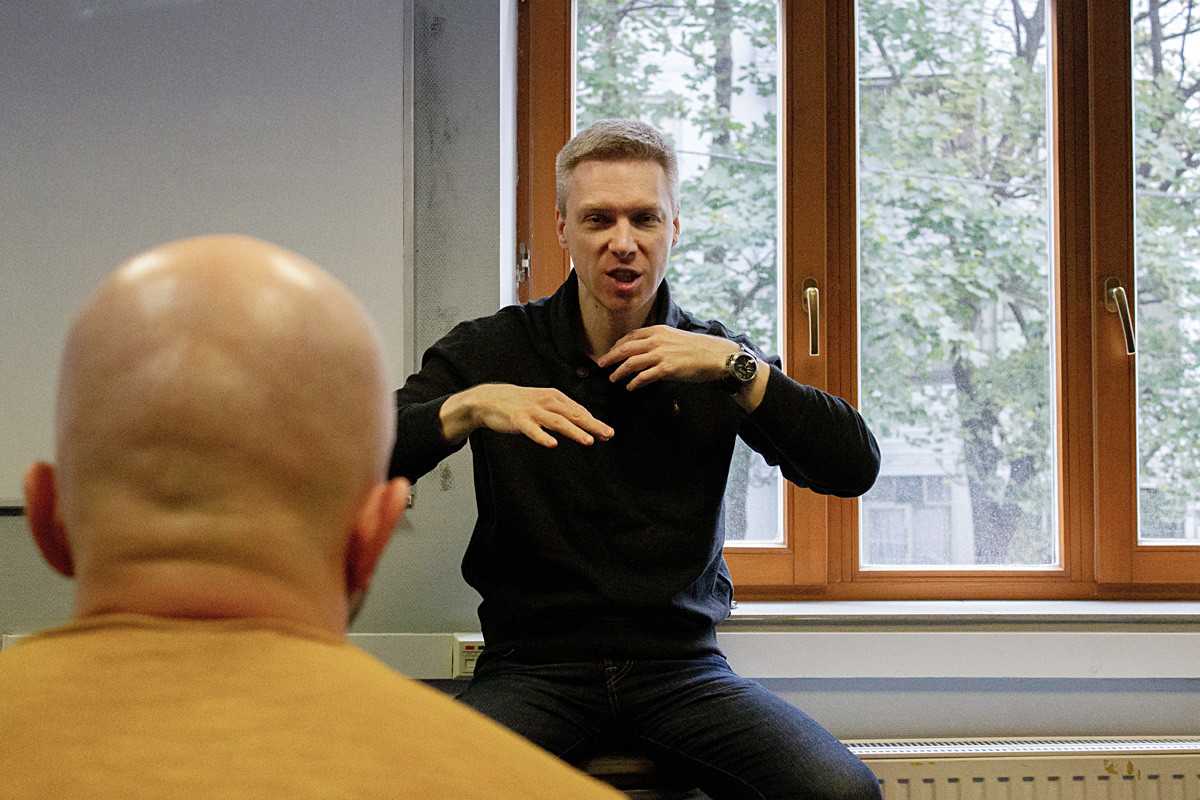 “Denis was called to follow the way of the seducer back in high school."

Denis went on to graduate as a psychologist and pass seduction trainer courses (they do exist), giving him the right to work in this “academic” field.

“Our project is designed to help men find the women they would like to meet, to communicate with them the right way, and to build relationships with them taking into account female psychology, so that both sides benefit,” says Denis. 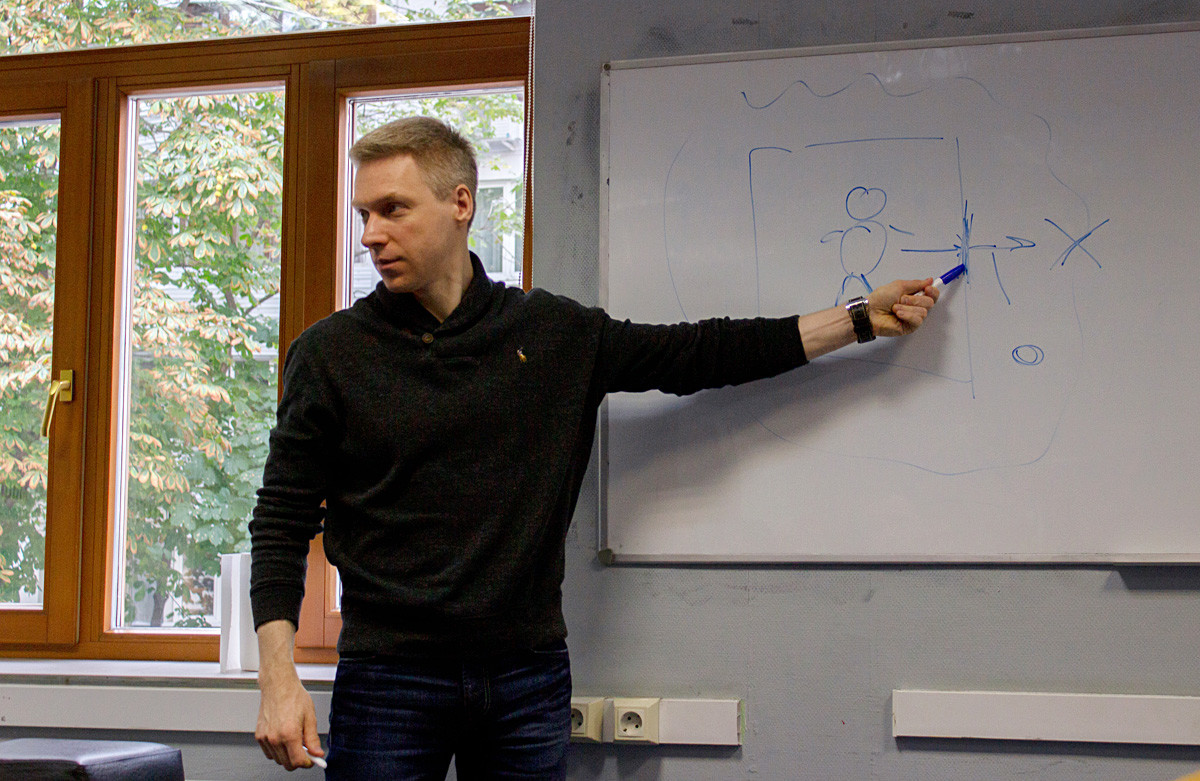 The lesson kicks off with a discussion of typical “male fears” when talking to women and ways to overcome them.

The lesson kicks off with a discussion of typical “male fears” when talking to women and ways to overcome them. Denis possesses a powerful charisma, and immediately captivates his audience; his words seem to echo with truth.

Denis teaches course participants the right way to get to know girls in public places. They should approach them, talk about four “failproof topics” (which Denis has previously outlined), take their phone numbers in a special well-rehearsed way (to reduce the failure rate), and lastly “deal with objections” if a girl is unsure about giving her number to a stranger. 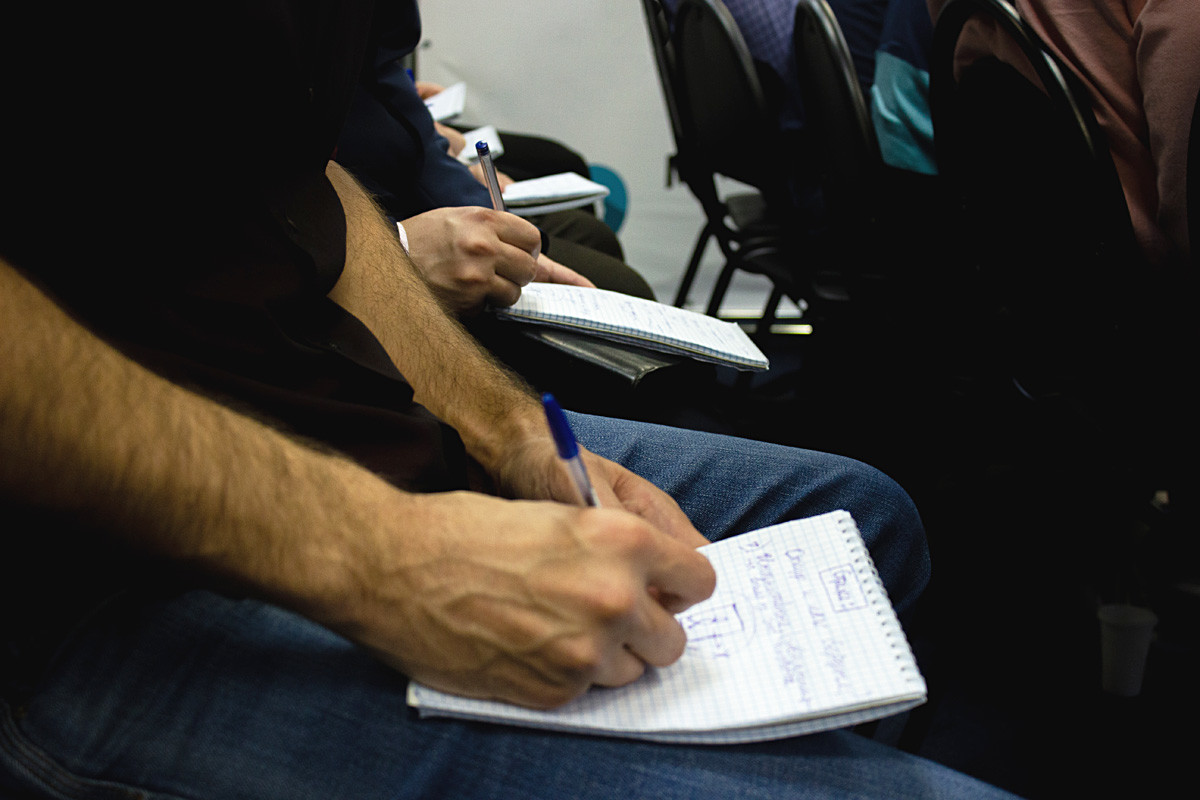 After the guys have practised these techniques on each other (not without embarrassment), they head out “into the field.” The “pickupers” are divided into three groups and go to three different shopping malls, where everyone must get the numbers of five girls with whom they will later go on a date.

Vsevolod, 27, my pick-up partner, signed up after breaking off a four-year relationship with his girlfriend. He says that they didn’t match character-wise.

Like the other trainees, he paid 35,000 rubles ($550) for a basic seduction course, which includes three weekends of intensive theory and practice. After completing the foundation, he plans to take an “advanced” course.

We arrive at the Okhotny Ryad shopping center off Red Square, and have 1.5 hours to get five numbers. The first attempt ends in failure. 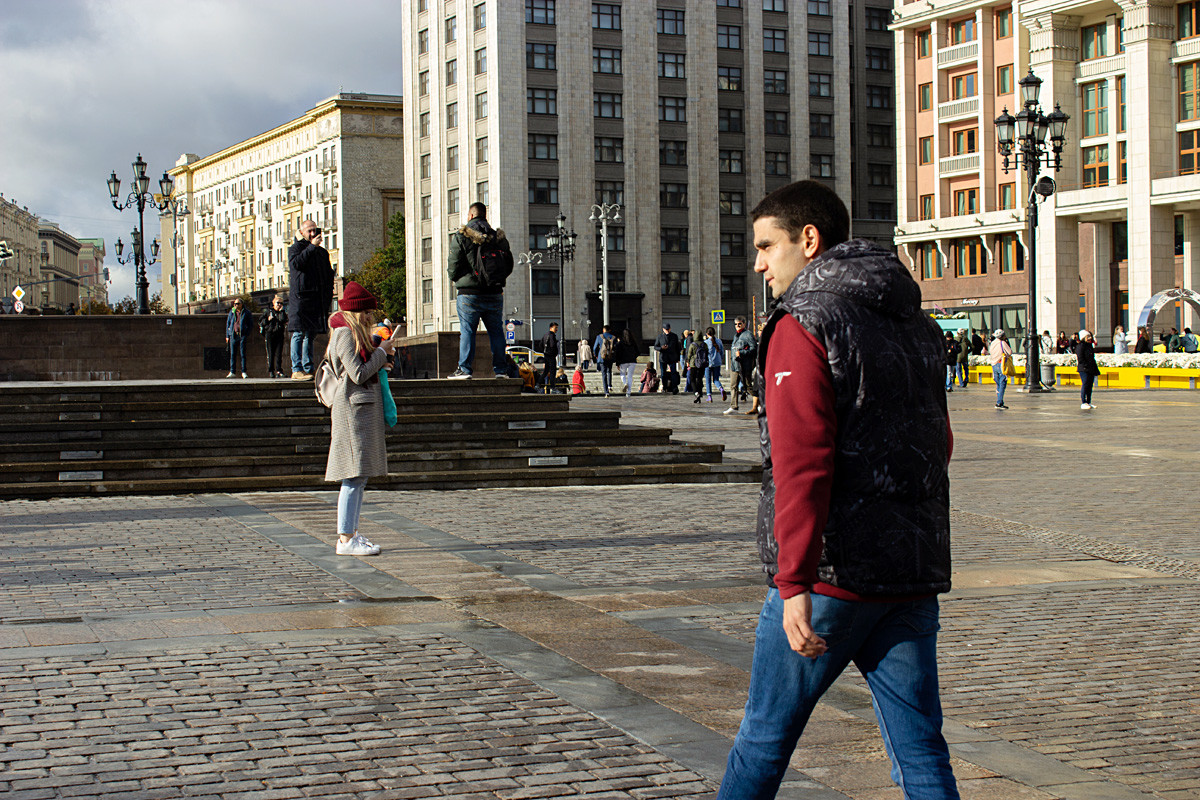 My pick-up partner is embarrassed to approach unfamiliar women.

“Hey, you look great,” Vsevolod casts his metaphorical rod, but the “fish” are more alarmed than charmed, and shy away. My pick-up partner is embarrassed to approach unfamiliar women, and so circles around them for several long seconds before walking up. Some notice it. Creepy. 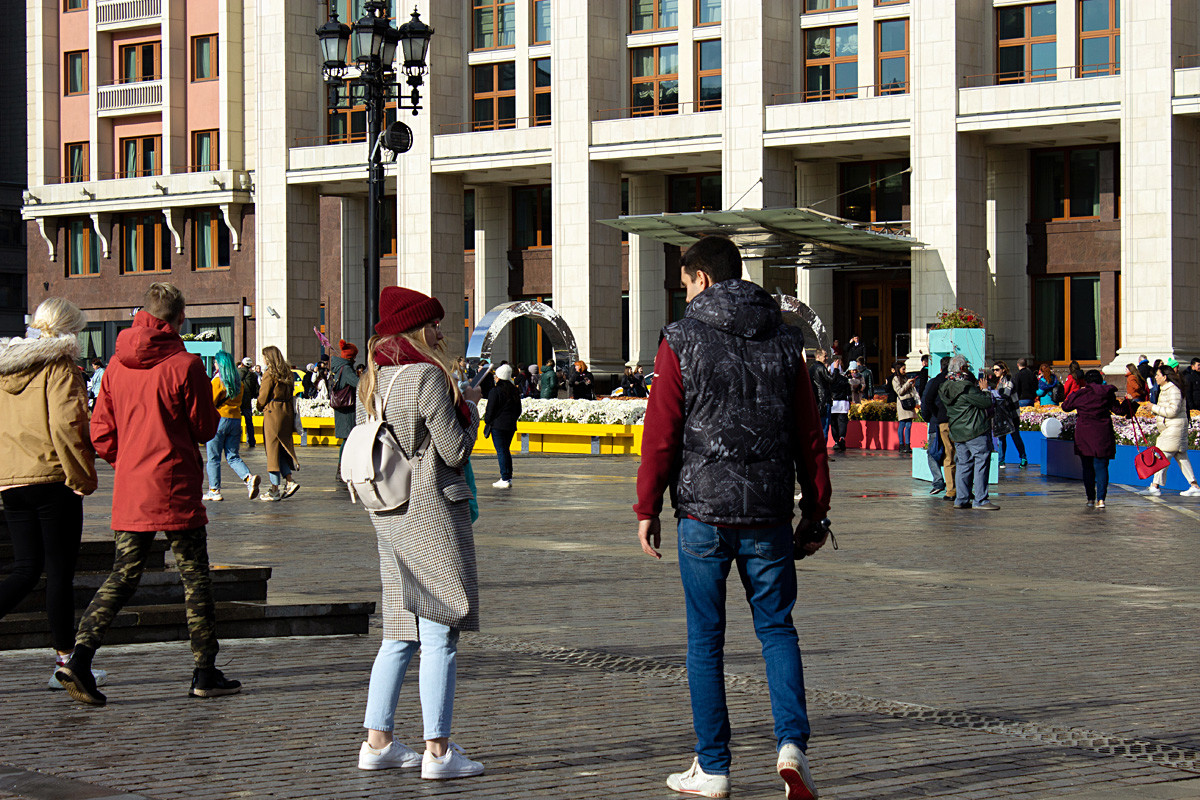 The first attempt ends in failure.

But the next attempt to get a girl’s number miraculously succeeds. And by the end of the allotted time, Vsevolod has five numbers, all belonging to living, breathing women. He will call to ask them out when his coach tells him how to do it right.

A con for suckers

Denis’s courses are by no means the only ones in Moscow (or Russia and the CIS). The seduction market is fiercely competitive, and not all players welcome the rivalry.

Another Moscow-based seduction expert (who preferred to remain anonymous) trains only businessmen with above-average income.

To be accepted into his seduction school, the client must pass an initial interview and be earning at least 225,000 rubles ($3,500) a month. 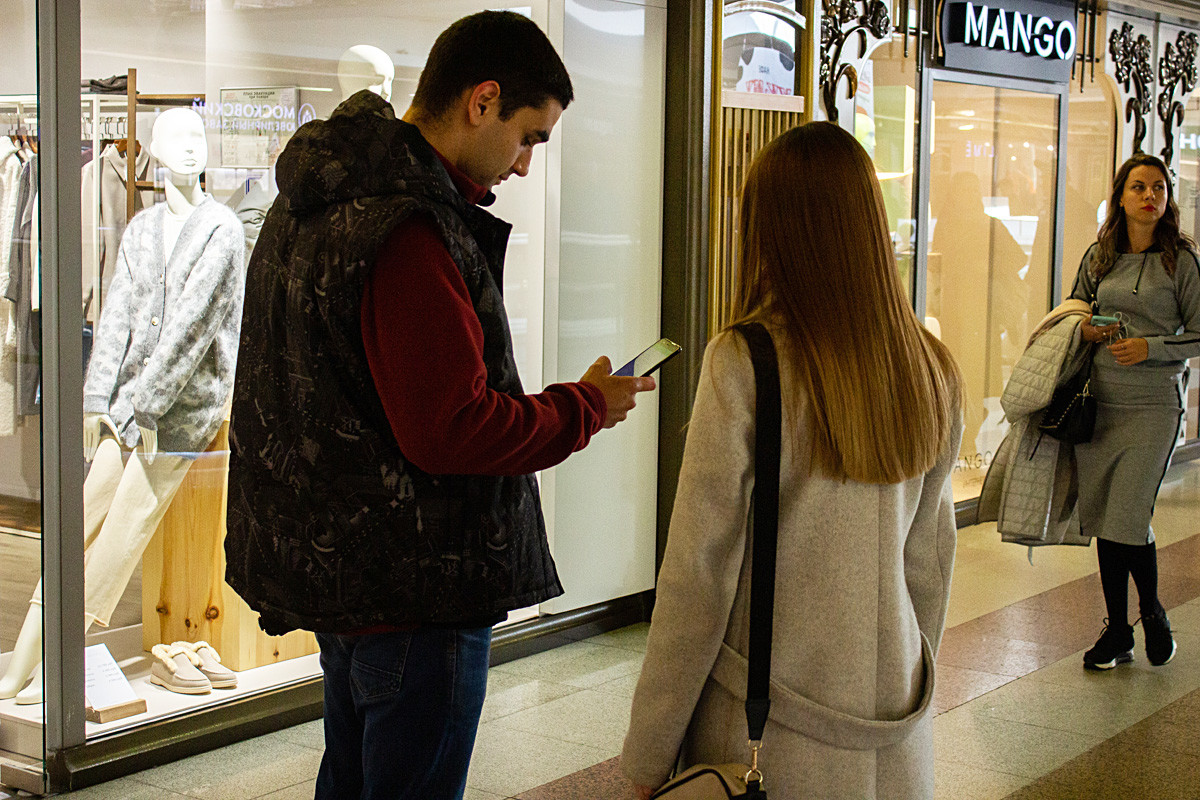 Here, material status is paramount, and the seduction guru sets a strict financial filter to sift out “losers on $500 per month” from “real men” with high earning power.

This elite seduction coach believes that trainers without such stringent conditions are effectively conning their clients.

“Can you imagine how difficult it is for a guy earning 50,000 rubles ($750) a month to fork out for a 35,000-ruble ($550) three-week course?” he says. “They find stupid, gullible types who get rejected by girls and fail at work. They earn little, their life is shit, girls don’t want to know. They think there’s some kind of secret that will be revealed to them during training. When in fact all they’re doing is flushing their last bit of cash down the pan. It’s a con for suckers.”

The RMES organizers, on the contrary, believe that any guy can seduce any girl — he just needs to know how.

“It’s a big mistake to believe that a girl living in Chelyabinsk with a salary of 15,000 rubles thinks differently to one from Rublevka [the richest part of Moscow] who earns 15 million. The only difference is their social circle. If a guy is outside this social circle, he needs to compensate by other means. Lack of money can be compensated for by appearance, positivity, or creativity,” says Denis, who promises his students he can help in all three departments. 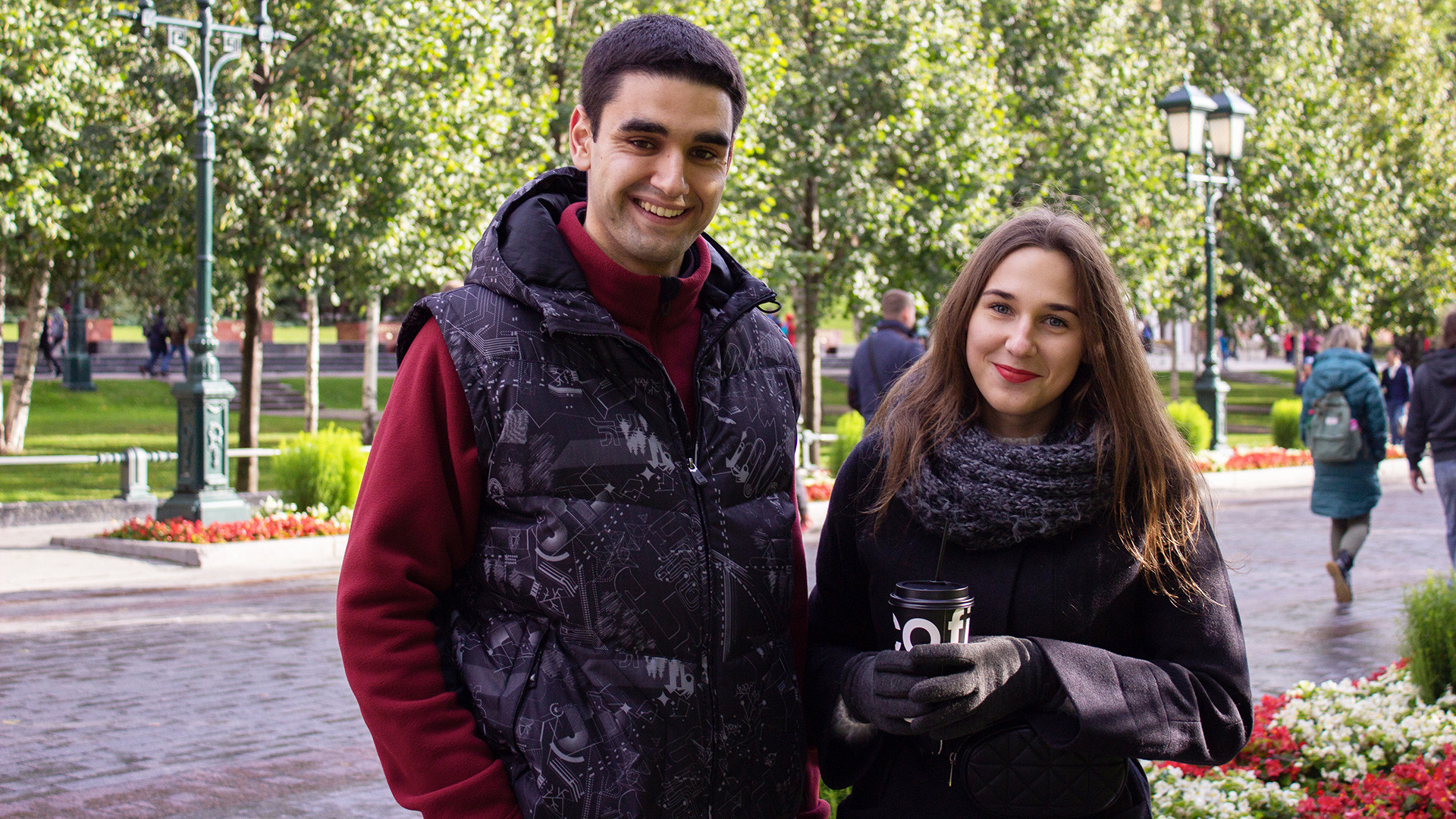 Meanwhile, the guys are finishing their simulated pick-up. Ilya is still badgering Nadir for his number: “You don’t give up, do you... Oh bugger you, here it is,” Nadir laughs.

The atmosphere at the training is genuinely very positive. That evening, after a post-mission debriefing session, the guys go home in a good mood, with the numbers of (hopefully) five (hopefully) beautiful women in their phones and ambitious plans for the coming week. Even if they don’t find love during the course, they will definitely have some fun weekends in like-minded male company. Maybe $550 ain’t so much after all?

Click here to learn why do Russians have children so early?