What WHISPERS ‘I'm Russian’ – as opposed to SCREAMING it? 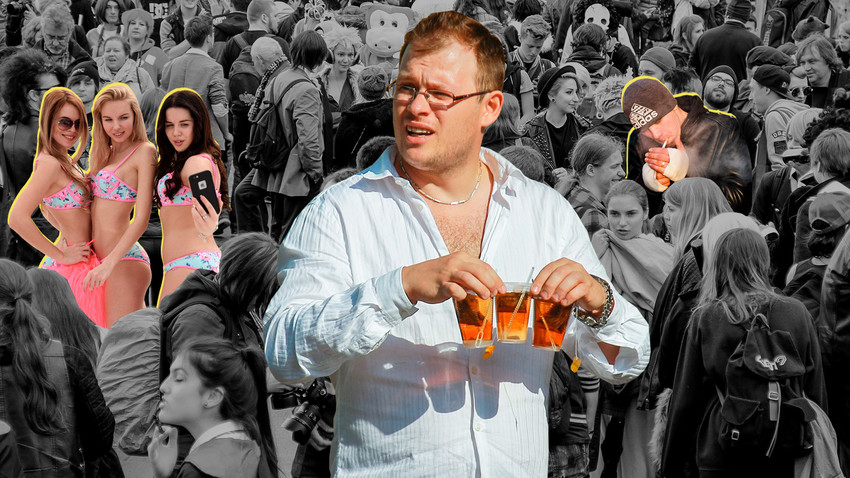 Pixabay; Vladimir Smirnov/ТАСС; Alexey Malgavko, Nina Zotina/Sputnik
Being the owner of a surname like ‘Petrov’, or having a thick, blocky accent are just a few among many things that simply scream – ‘I’m Russian.’ But could you spot the much more subtle signs?

While there are some obvious clues that can help you spot commonfolk Russian tourists outside Russia, bear in mind: Russians nowadays are different, and many of them will do everything within their power to conceal their origins. The reason is simple – these Russians don’t like to be viewed as Russian tourists abroad – either as moneybags or as “the poor guys from that post-Soviet country.”

People like this have learned not to wear their slippers over socks, they don’t clap when the plane lands. Still, some habits are indispensable, and they’re what we are looking for. 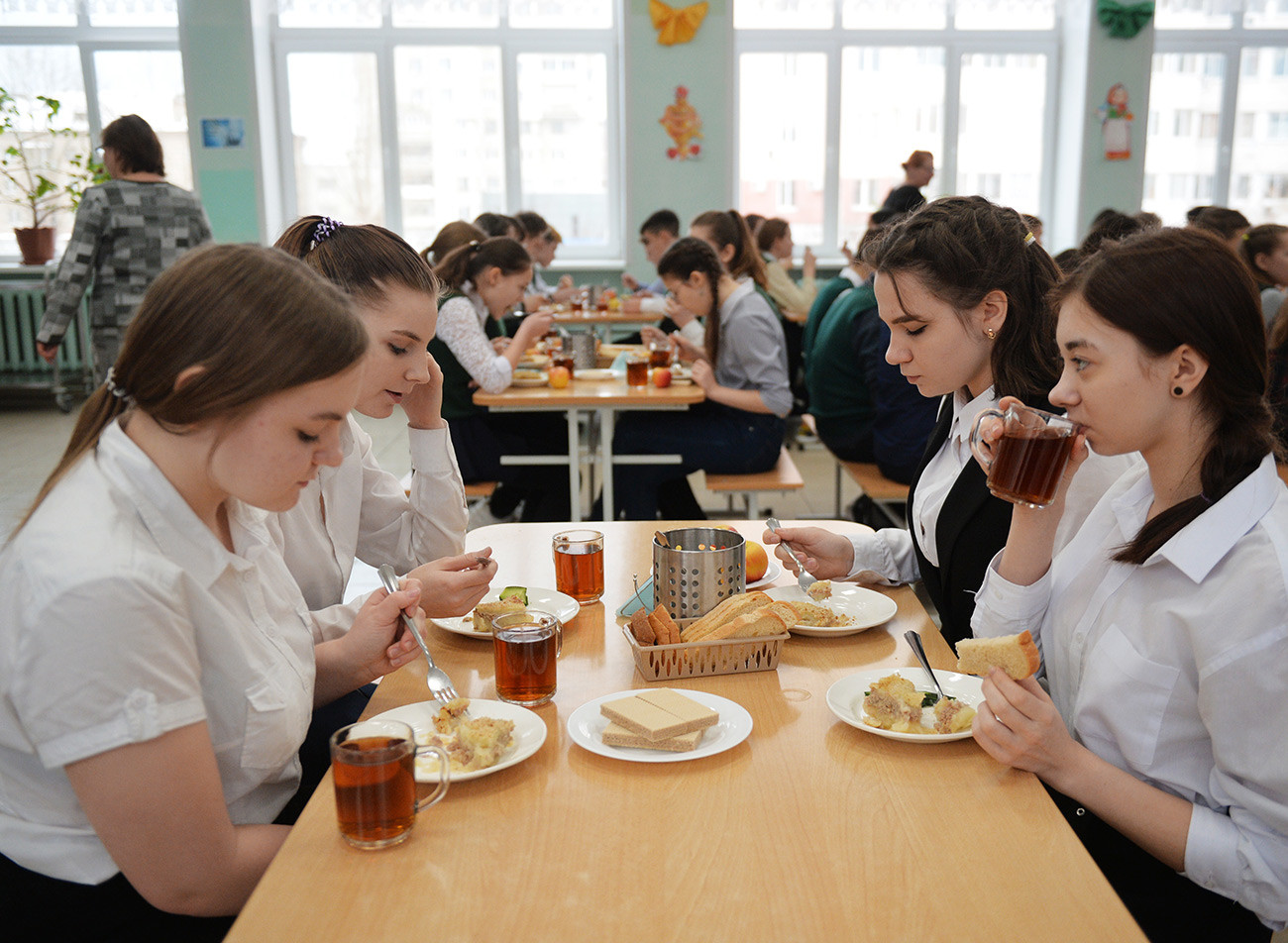 It’s not true that only Russians drink a lot of tea – the British, Chinese and Indians, and of course, Turkish folks are fond of it, also. But! If a person orders tea (or coffee) with food, he is definitely Russian. One very likely explanation is that in Soviet school canteens, tea was served together with food, and the children had limited time to eat during their break. Tea and food, therefore, had to be consumed simultaneously.

Some peculiarities also arise when it comes to gender roles at the restaurant. You may have already learned from us that Russian women expect their guys to open doors for them and help them put on their coats, so, for a man, doing this (or visibly making an effort at avoiding it) just screams he’s Russian.

However, there’s a more subtle clue. In Russia, it’s still traditional for a man to pay the bill. So, although formal etiquette requires each partner to order food separately, beginning with the woman, in Russian couples, very often the guy first asks his lady what she will have, and then says it all to the waiter (while his significant other browses her phone absentmindedly).

When it comes to tipping, ‘traditional’ Russians still believe a tip is necessary only if the service has truly gone above and beyond. So, not leaving tips can also be interpreted as a Russian habit, and for waiters – a screaming one, for sure. 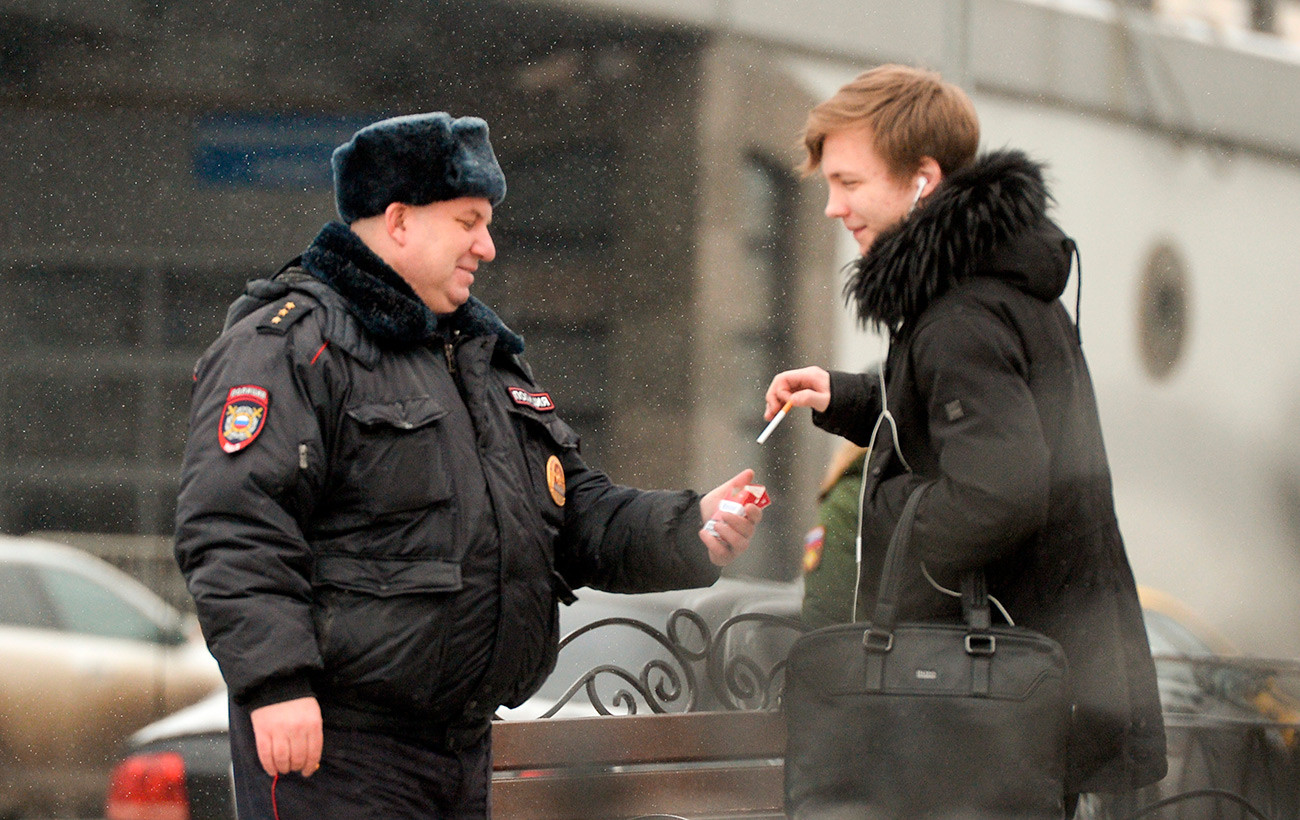 Yes, a Russian would never be much bothered if you were to bum a cigarette off him/her. Mutual help is kind of a matter of honor for smokers in Russia; refusing to spare a cigarette is considered discourteous (if it’s obvious that you’re a smoker and have some smokes on you). While in the U.S., it’s compulsory to exchange cigs for a 10-cent coin, in Russia, you can bum one for free, and even ask for three cigs instead of one (“For my friends there on the corner; by the way, God loves the Trinity!”)

And yes, a Russian wouldn’t mind sharing his beer, even if you take a few sips while you’re on it. For Russians, it’s not about the alcohol - it’s about the company you consume it with.

The looks, selfies, and more 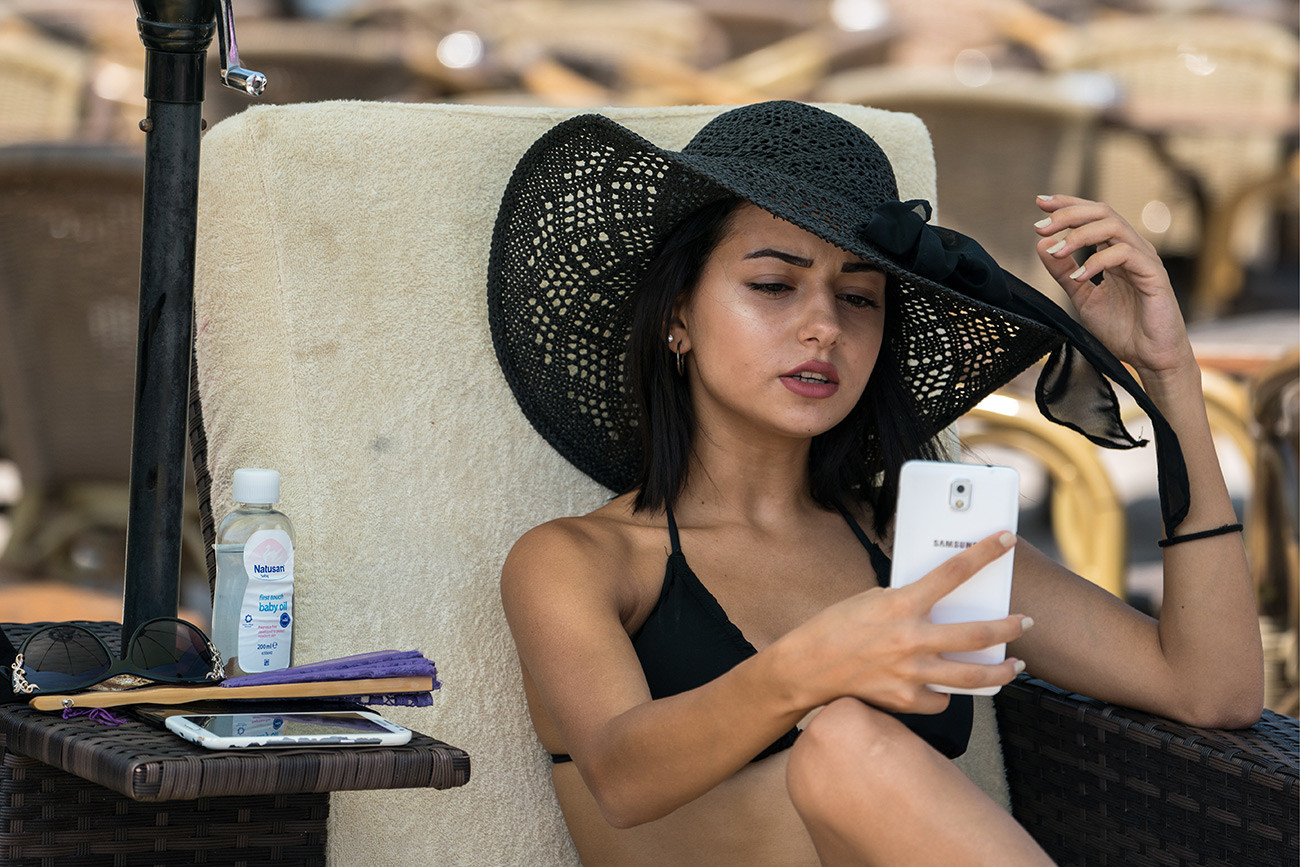 Being ‘dressed to kill’ all the time, even when you’re out for groceries, has become another ‘staple’ of Russian women’s clothing habits. The newer generations of Russian women have stopped wearing evening dresses all the time, however. They’re now as casual as any French or Spanish girl could be.

Nevertheless, there are still hints up and down. Specifically, the hair and shoes. The latter are always impeccably clean, even if the streets are full of sludge, sleet or snow. The hair will most likely be ‘subtly’ styled with hairspray, curling iron, etc.

When it comes to the modern art of selfie-taking, it’s hard to say if Russians stick out in any meaningful way, right? Not so fast! Here’s something subtle a few foreigners have picked up on after years of communicating with Russians: a Russian woman will often try to subtly put one leg in the front of the other when posing - or arm on the hip, or something similar to spruce up an otherwise boring photo - and likely not smile for the camera, but instead wear a predatory, magazine-style facial expression. This is because every pic can become a state-of-the-art portrait for her Instagram page  - as opposed to a mere reflection of fun times with friends (the situations this really sticks out is when the photo contains absolutely horrible, unsightly scenery, but still doesn’t stop the girl from trying to look like she rolls with the Canne’s Festival crowd). 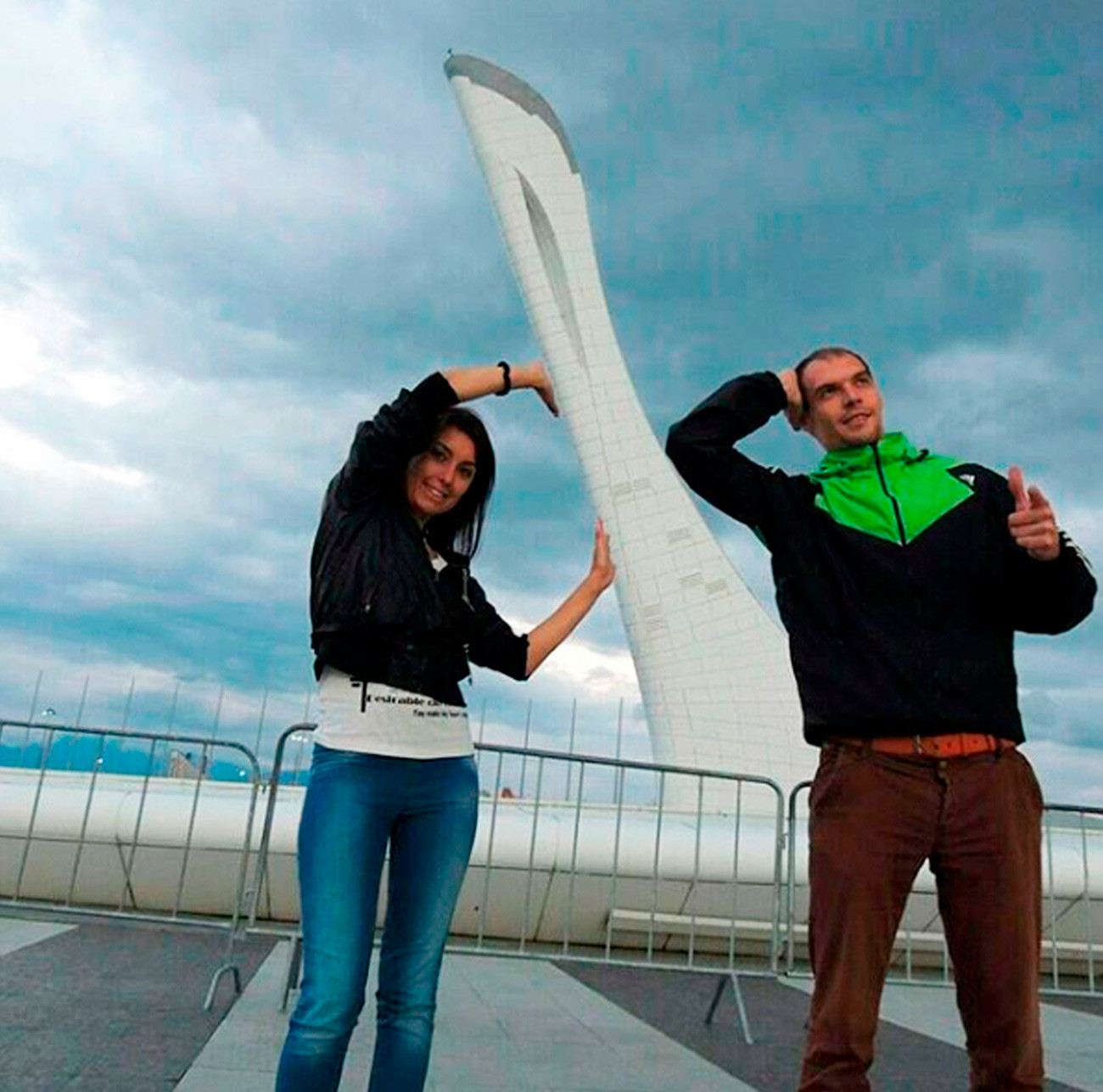 And, lastly, here’s something that might whisper that a person is Russian to you - while absolutely screaming it to another Russian: the act of exaggerating objects in photos: “Here I am next to the Eiffel Tower, and, just in case you don’t understand how awesome this fact is, I’m going to point at it in a simulation of feigned disbelief and amazement.” There are, of course, variations on the classical pose - one of them including spreading your hands to the side, as if beckoning the viewer to feel something more than what they are already feeling when they look at the Swiss Alps.

Another peculiar thing about Russians that a French friend of mine noticed is their ‘fear of liquid soap’. Russians are used to having hard soap that can be washed off hands completely with water, unlike liquid soap that leaves a thin layer of moisturizing cream. This, Russians don’t like, possibly because they’re used to hard cheap soap their mothers used in their childhood. Maybe this soap is actually another thing on the list of “What makes Russians so tough.”