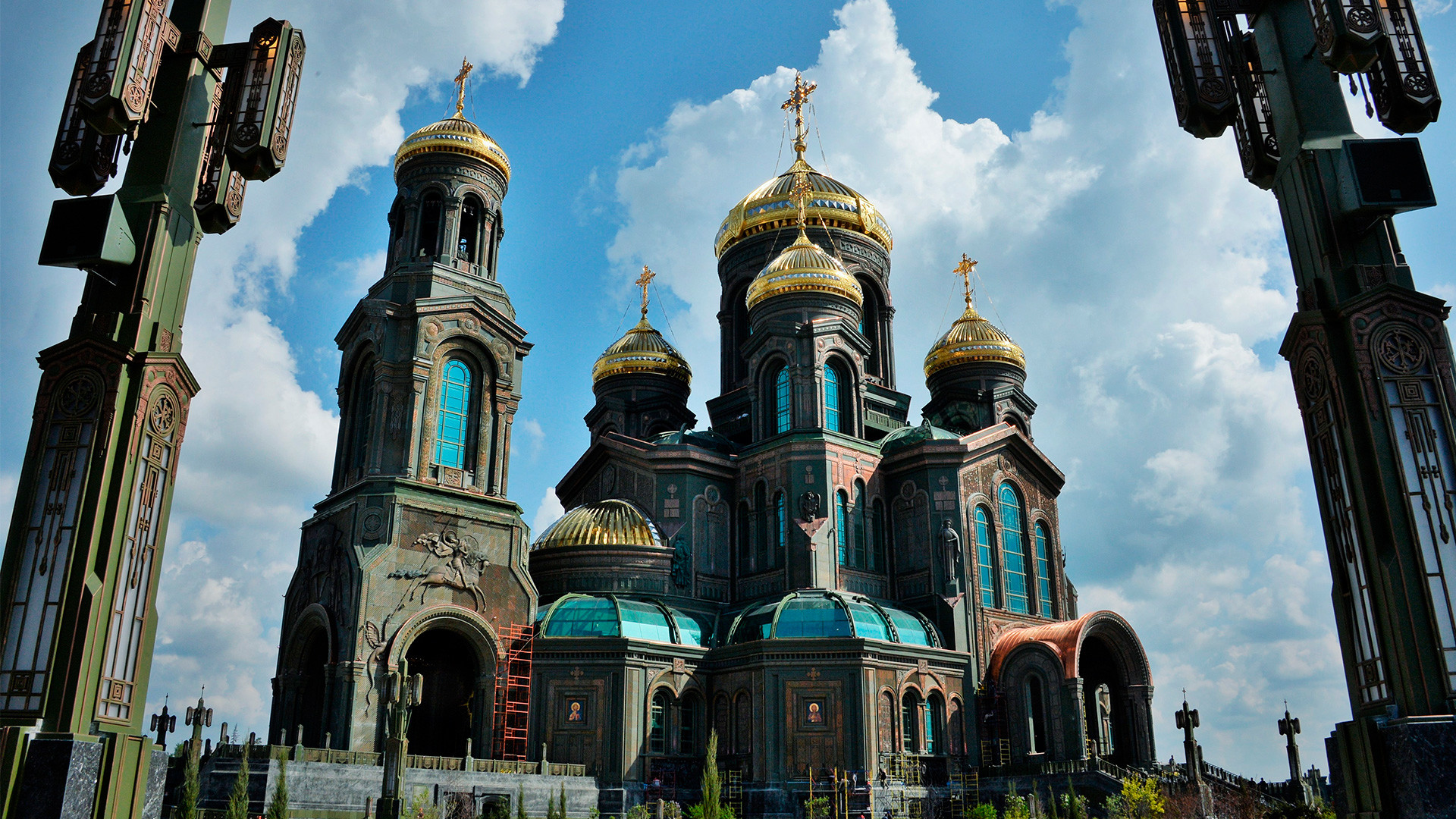 Igor Palkin/Sputnik
With its dark-green exterior and stairs forged out of melted German tanks - and containing some of Hitler’s belongings, including his military cap - the Main Cathedral of the Russian Armed Forces now stands tall just outside Moscow. And it’s already the most discussed Orthodox place of worship in the country.

The imposing structure, located in the Moscow suburb of Kubinka, was consecrated on June 14. The grand opening was initially planned for May 9, the day marking the 75th Anniversary of the Victory in the Great Patriotic War, but was postponed due to the coronavirus crisis. 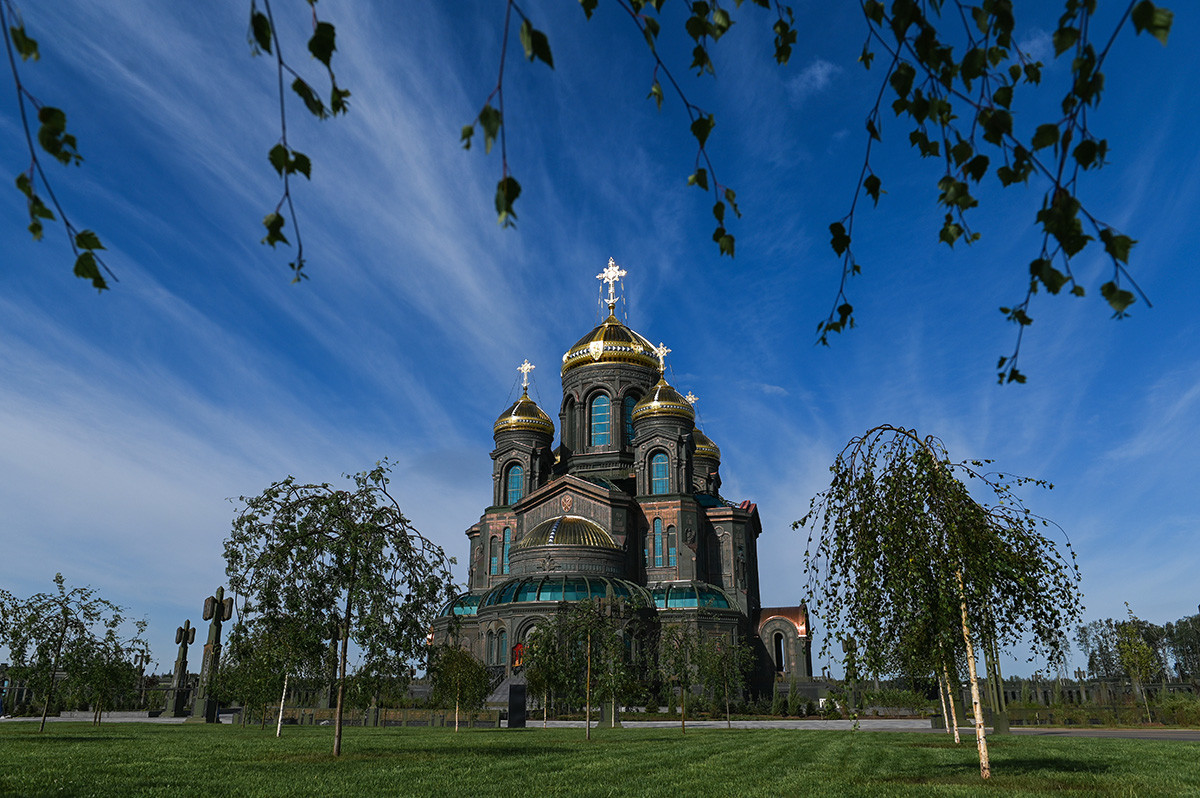 The building stands at 95 meters tall (with the cross included), making it the third tallest Orthodox cathedral in the world. Its grandeur, however, wasn’t the only thing that prompted lively discussion among a sizable chunk of the population. 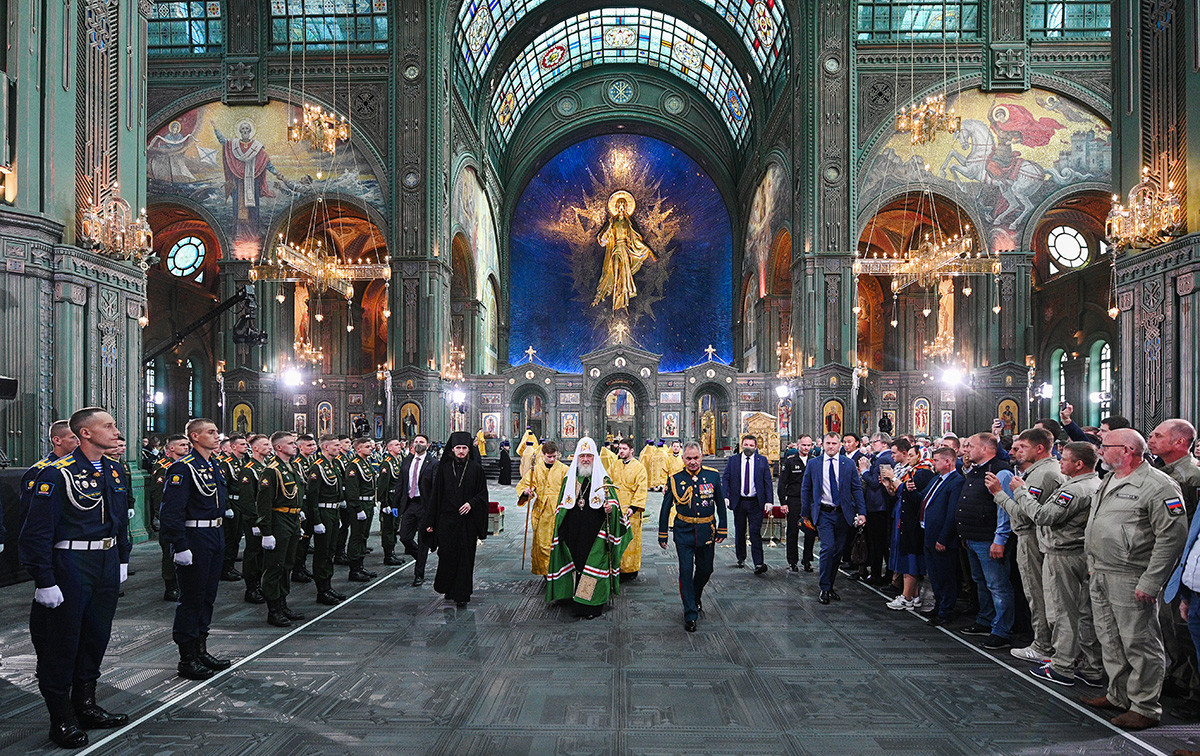 The black-and-green shade of the cathedral is another thing that caught people’s eye: traditional Orthodox architecture usually comes in much lighter shades. Social media users have already nicknamed it the ‘khakki cathedral’. 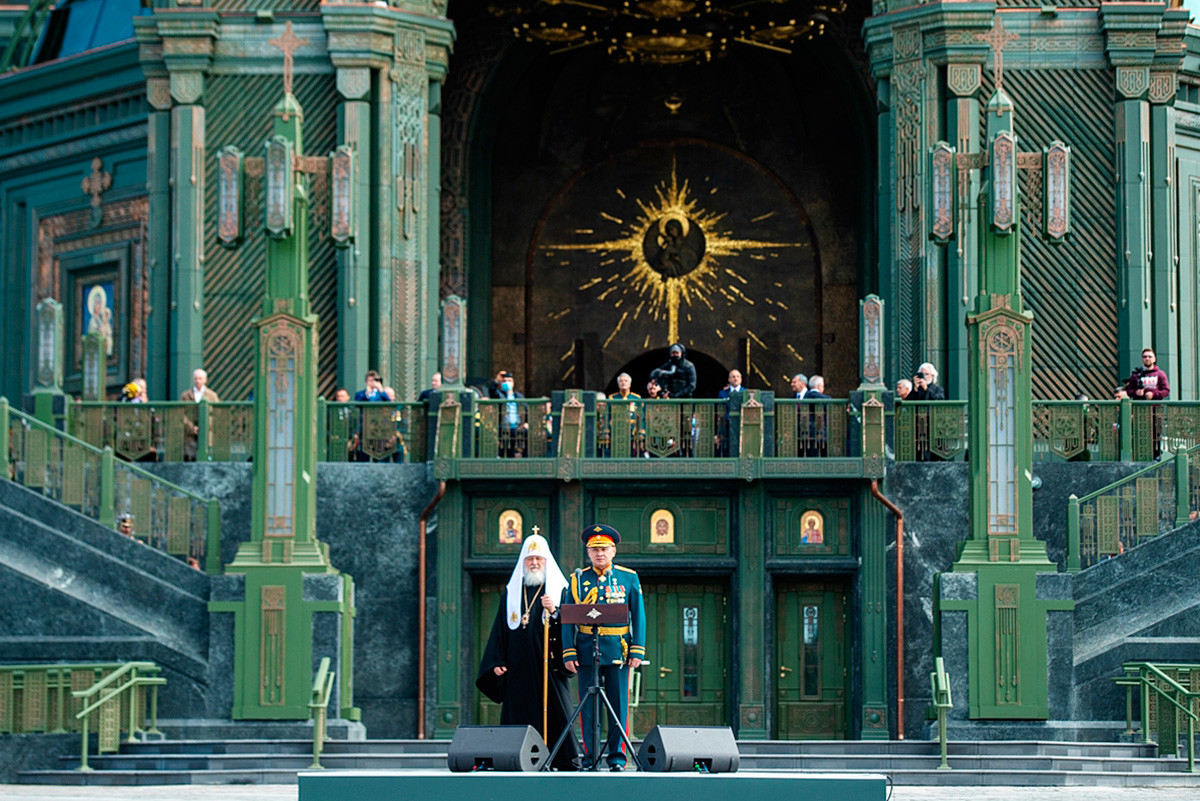 The cathedral is bursting with symbolism. For instance, the pedestal of the main dome is another - measuring 19.45 meters in diameter. The pedestal itself features eight windows. Meanwhile, the dome measures 22.43 meters in height. These measurements symbolize the signing of the German Instrument of Surrender on May 8, 1945, at precisely 10:43 PM. 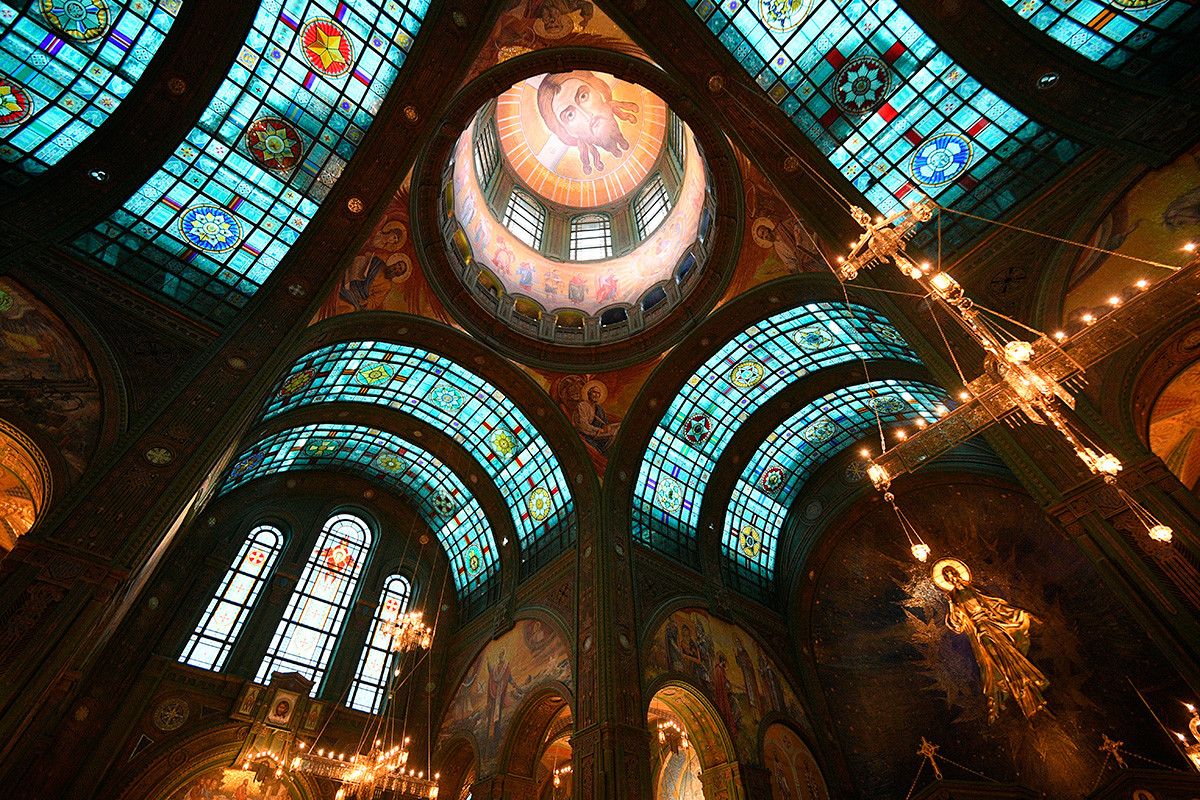 Another detail can be gleaned in the 14.18 meter smaller domes, signifying the 1,418 days the war lasted for.

Minister of Defense Sergey Shoygu, told TV channel ‘Zvezda’ earlier about the steps of the cathedral, which were forged out of melted-down German tanks. “Ascending the steps of the cathedral, we walk over the weapons of the defeated enemy.” The channel showed crates of Nazi Germany’s weapons, sent over to Moscow from the regions to be melted and reformed into the cast iron stairs. 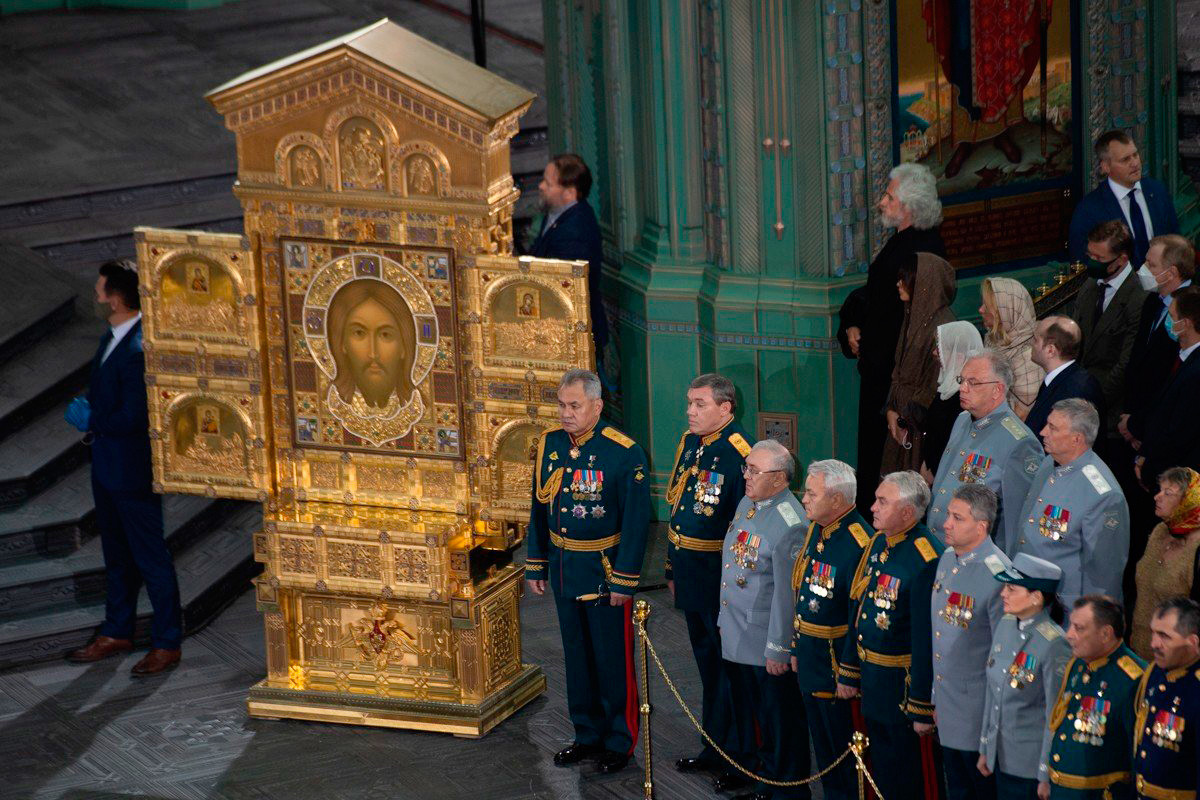 The church’s main icon was inscribed on planks forged from the iron carriage of cannon, salvaged from the bottom of the Neva River and dates back to 1710.

The Main Cathedral of the Russian Forces has been making waves in the media even before completion - all thanks to the elaborate mosaic, depicting the faces of Russian President Vladimir Putin, Soviet leader Joseph Stalin, Director of the FSB Alexander Bortnikov and other political figures. However, Putin’s face was subsequently removed from the cathedral, in accordance with the Russian President’s wishes. Putin considered his presence on the icon as a premature assessment of his accomplishments. The mosaic itself will not be destroyed, and is instead being kept in another location.

The cathedral is, however, still decorated with a mosaic, covering thousands of square meters of its walls. Meanwhile, the mosaic in the main dome (measuring in at 300 square meters) features the image of Saviour the Miraculous and is the biggest in the world!

According to website Znak.com, the cost of the church came to six billion rubles (approx. $80.4 million). Three billion of that came from Moscow’s budget, with the remaining three billion collected from donations.