Why does Russia look so gray? 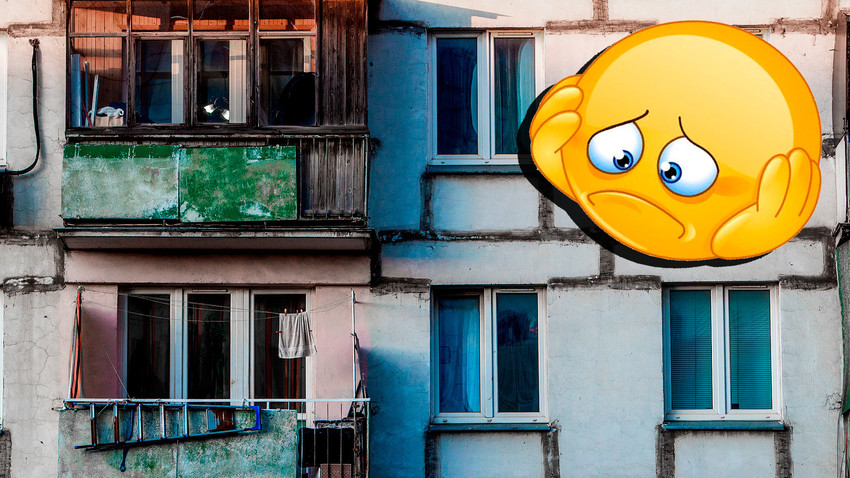 Legion Media
When you blend Soviet history with a harsh climate, you often get the color gray.

Anyone who’s ever been lucky enough to travel in Russia beyond the touristy cities may wonder why some places in the world’s largest country look so … well, gray.

Those who have seen typical Soviet residential quarters will know what we mean. 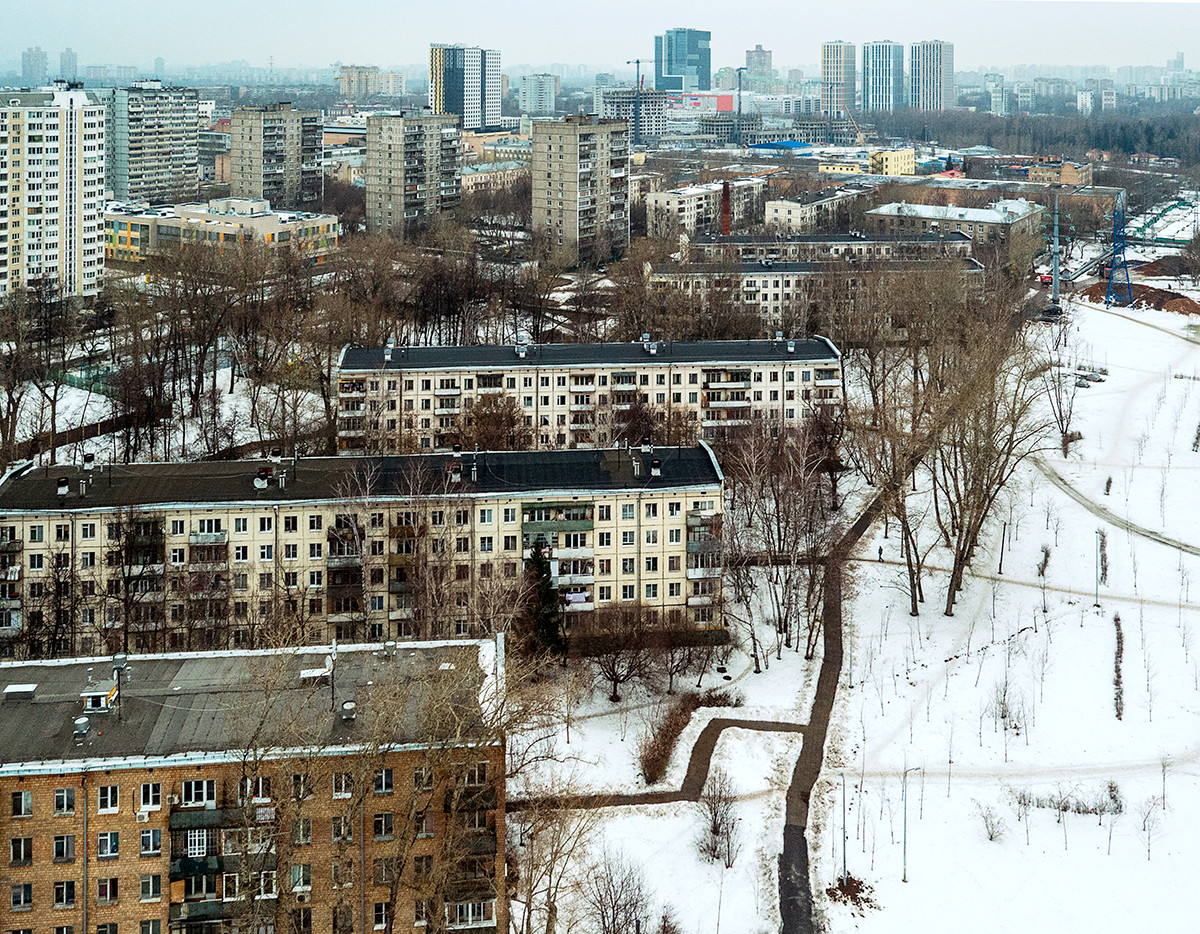 Some of these photos look as if they have been desaturated in Photoshop - but they haven’t. 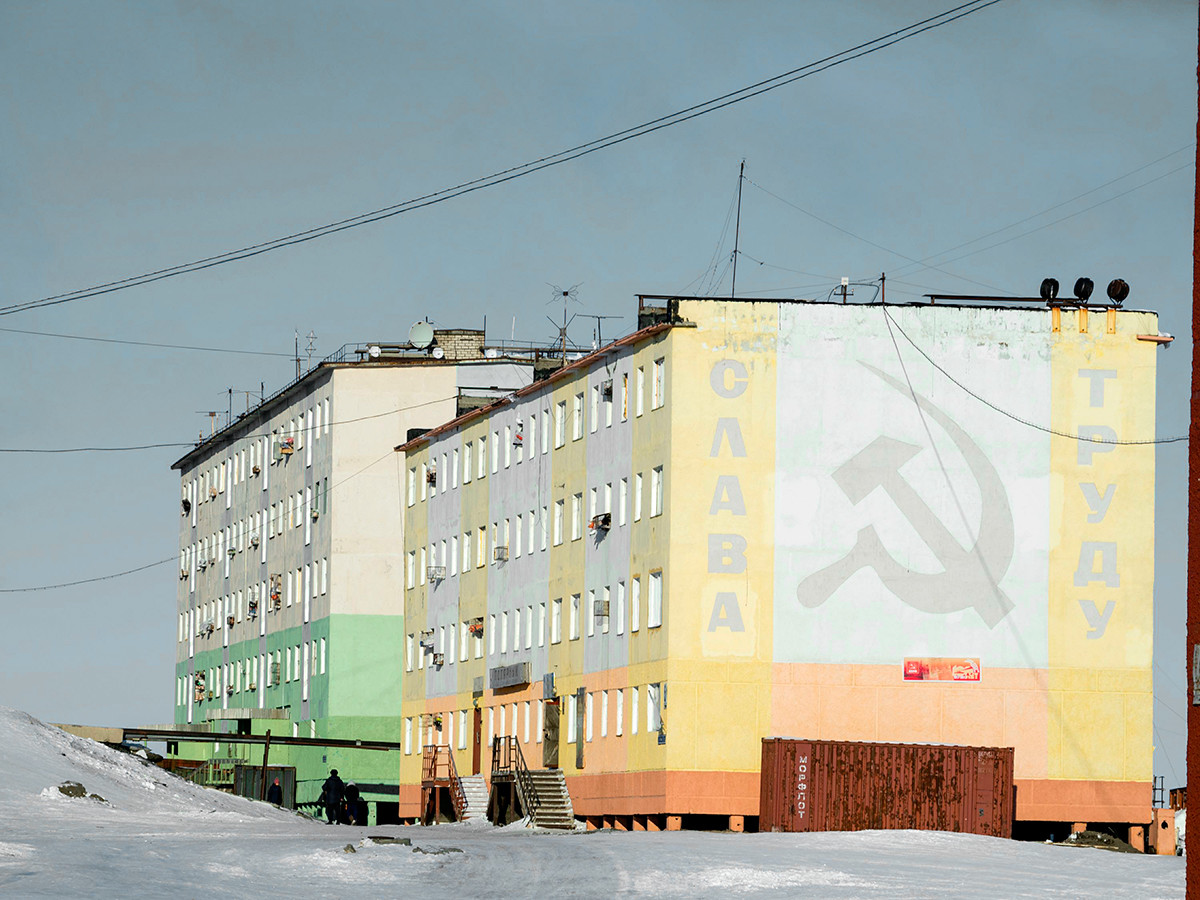 Apparently, this puzzles many foreign tourists who are used to seeing a comparatively more colorful world around them. Why, they wonder, is Russia so gray. Then they go online looking for answers. We’ve put the most compelling ones together for you below!

“They [Russians] have a recent history of utilitarian architecture (ie. just build a bunch of efficient square gray blocks). So, even if the streets were clean and the buildings were well-kept, it would still look pretty crappy,” said one Redditor who attempted to explain why Russia appeared so gray.

In a way, he nailed it. Most parts of Russia that look gray do so for precisely this reason: utilitarian Soviet architecture. 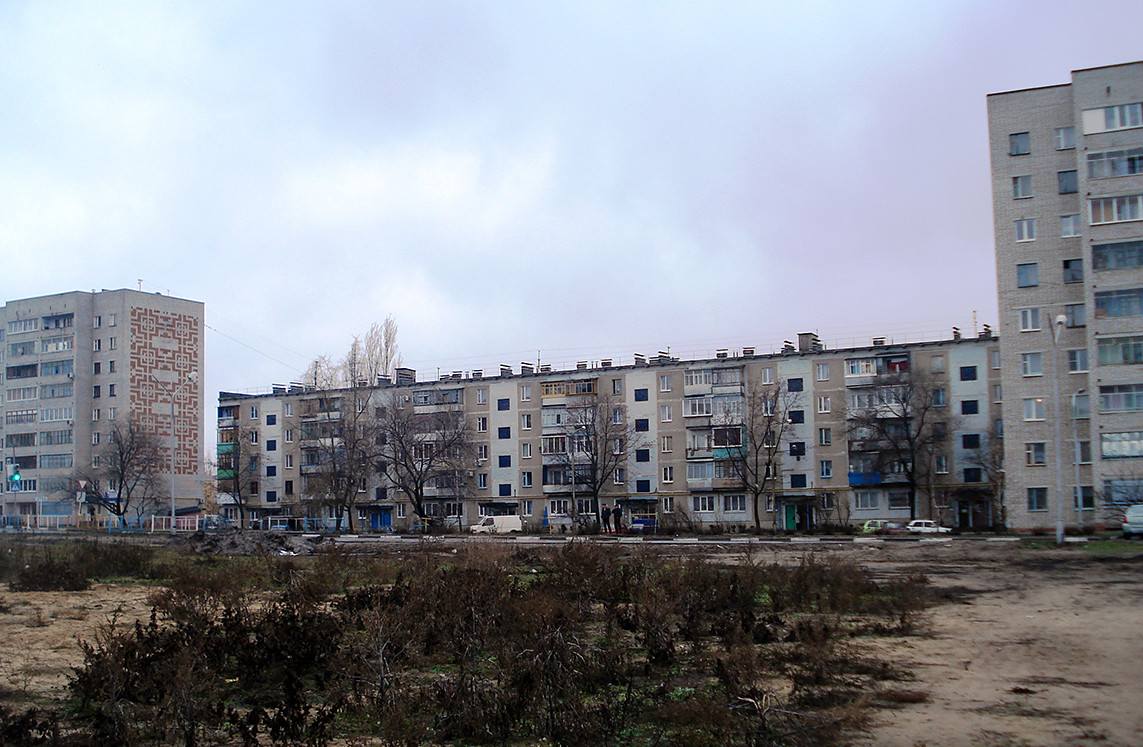 After the war, the Soviet Union faced a problem of overcrowded cities and severe housing shortages as more people moved from rural areas to cities for jobs available in industrial and other sectors.

In the early 1950s, the Soviet authorities decided to solve the problem of housing shortages by quickly building numerous cheap and similar housing blocks of prefabricated buildings made with concrete panels that went down in history as khrushchyovkas — after one of the USSR’s leader Nikita Khrushchov. 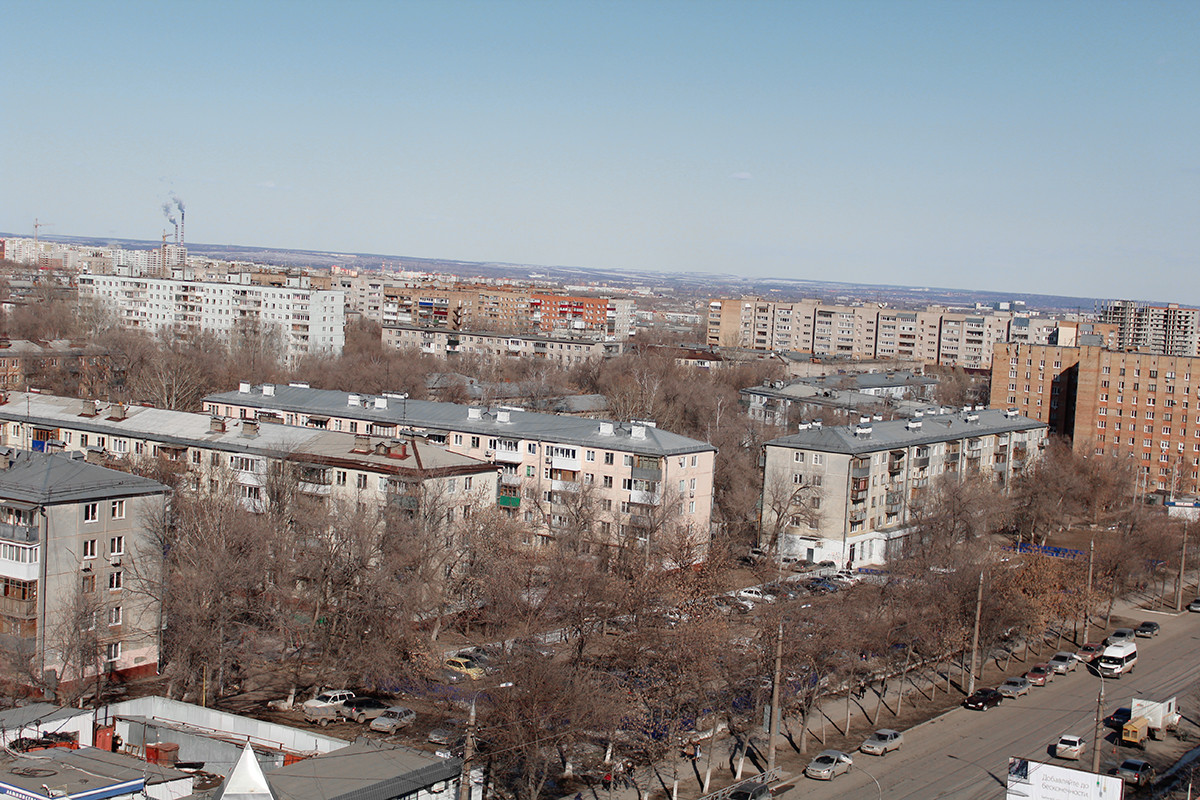 Easy-to-build khrushchyovkas effectively solved the emerging housing problem but, in turn, created multiple new difficulties that haven’t been solved by those days.

“Mass multi-story buildings that accommodate the majority of the population are intended only for housing, but nothing else. After leaving the house, an inhabitant of a residential area wants to get out of there as soon as possible — either to the center for work or to the nearest shopping and entertainment center. Hence the notorious pendulum [between] migration and traffic jams,” explains Vitaly Stadnikov, associate Professor of the Higher School of Urban Studies at the HSE, in an article published in 2016. 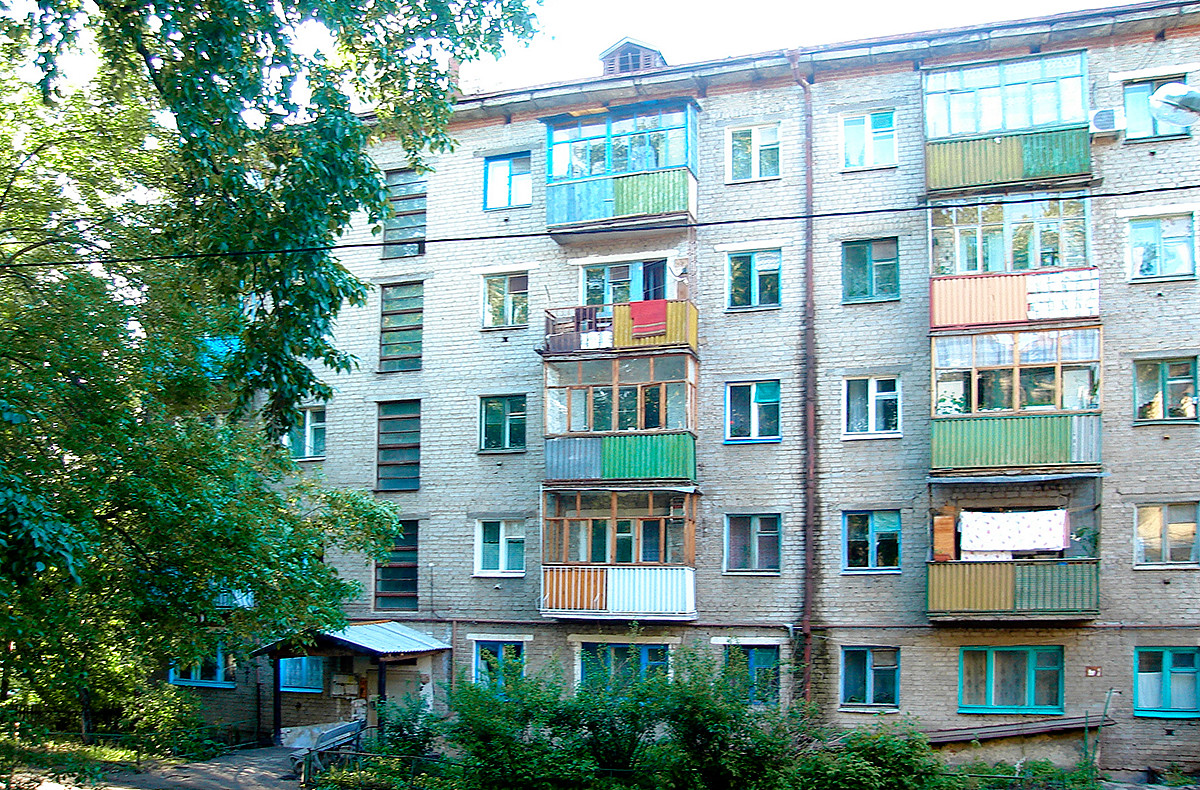 A typical khrushchovka in Kazan.

Khrushchyovkas fulfilled their goal — to accommodate as many people as possible as quickly as possible — but created a myriad of other housing problems. And most of all, they made Russia look gray.

“Residential areas built of multi-story buildings cause enormous damage to the city. They form a bleak and depressing environment,” says the expert.

Many people notice that some places in Russia look grayer than others. Perhaps the reason for this is that some places have factories - something that makes the surrounding areas look a lot worse.

There are cities in Russia that only exist to support certain industrial factories. For example, the famous closed city Norilsk is known for its harsh climate and remote location, where polar nights draw out for over a month of the year, summer is short, and the ground remains covered in snow through the end of spring. It was artificially created in the 1930s, when the Soviet government decided to explore and utilize the rich mineral resources of the region, and since then, has remained a center of Russia’s industrial mining. 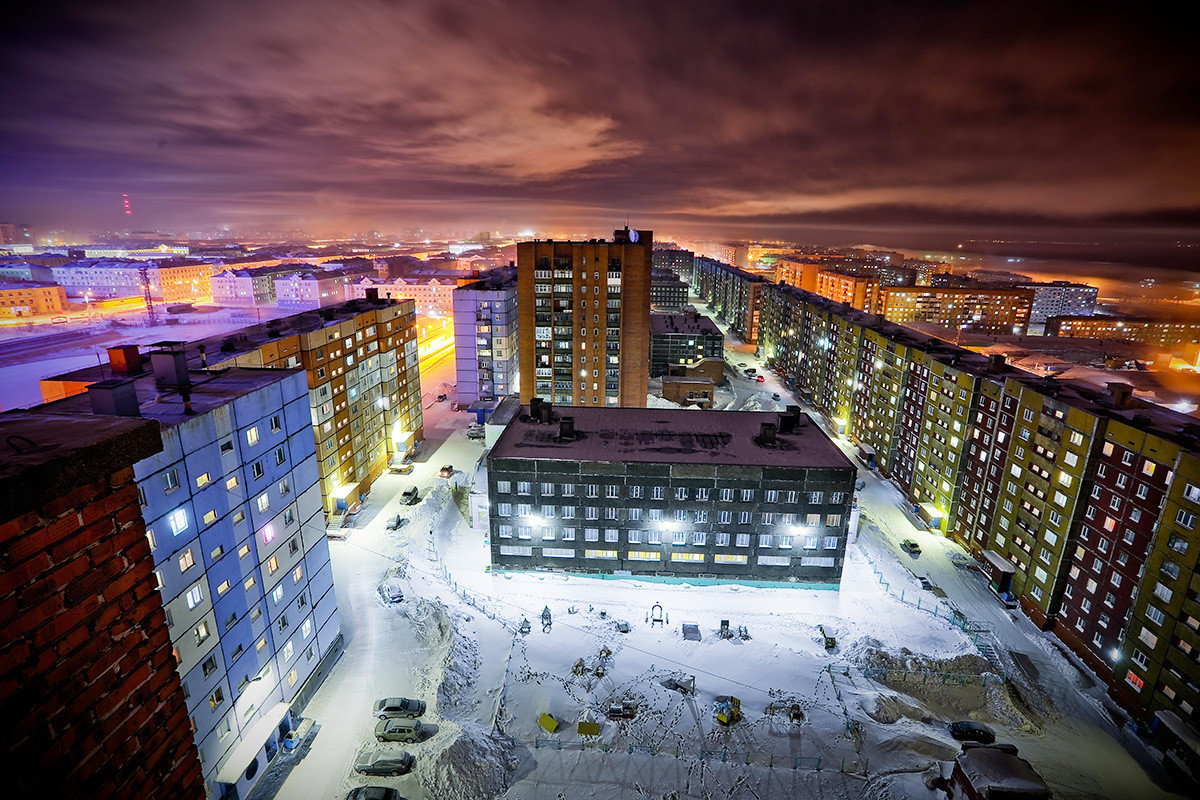 The ‘Days of Night – Nights of Day’ Norilsk photo series is about the daily life of the inhabitants of Norilsk (2,880 kilometers northeast of Moscow), a mining city north of the Arctic Circle with a population of more than 170,000.

Mainly pollution takes its toll on the city’s general appearance (link in Russian). But the sky often looks gray as well and long polar nights do not make it any better. 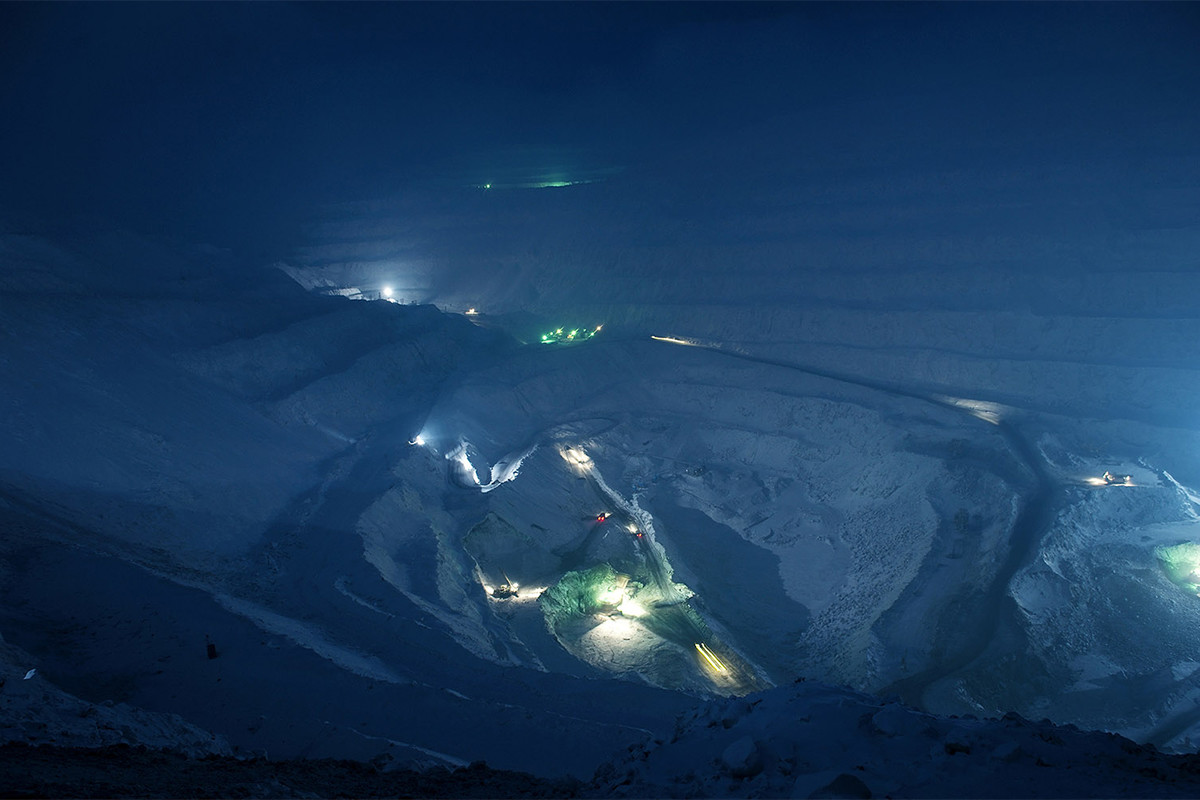 An industrial mine in Norilsk.

Just add ugly Soviet utilitarian architecture on top of it all and everything becomes clear as to why some places in Russia look so gray. 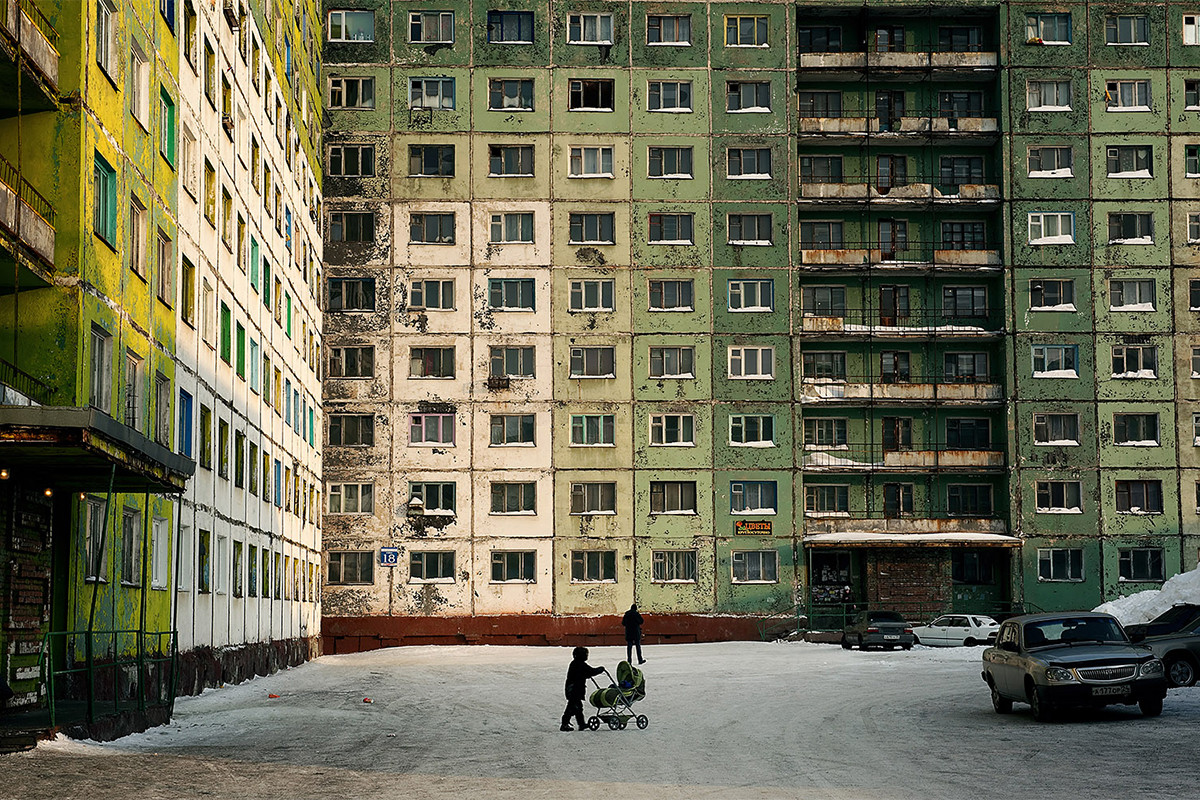 Just add ugly Soviet utilitarian architecture on top of it all and everything becomes clear as to why some places in Russia look so gray. Norilsk.

Even cities that are very beautiful may appear gray from time to time. Take Moscow or St. Petersburg — the two most popular tourist destinations in Russia. These places are notoriously dark in winter, as most of the time the sun cannot penetrate clouds. 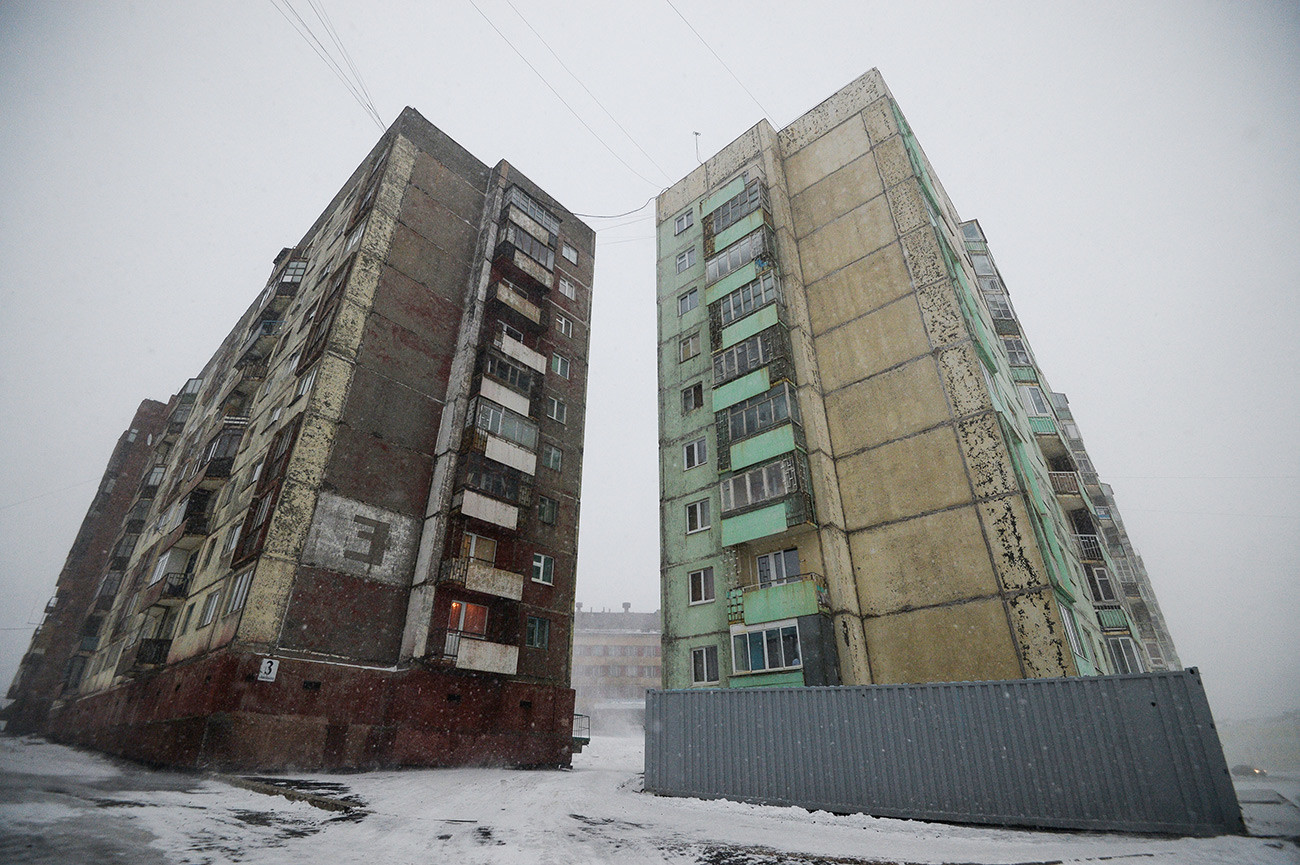 In December 2018, Moscow reportedly only got six minutes of sunshine for the whole month! For the rest of the month, the city was shrouded in clouds. The average amount of sunlight the city gets in December is a disappointing 18 hours. 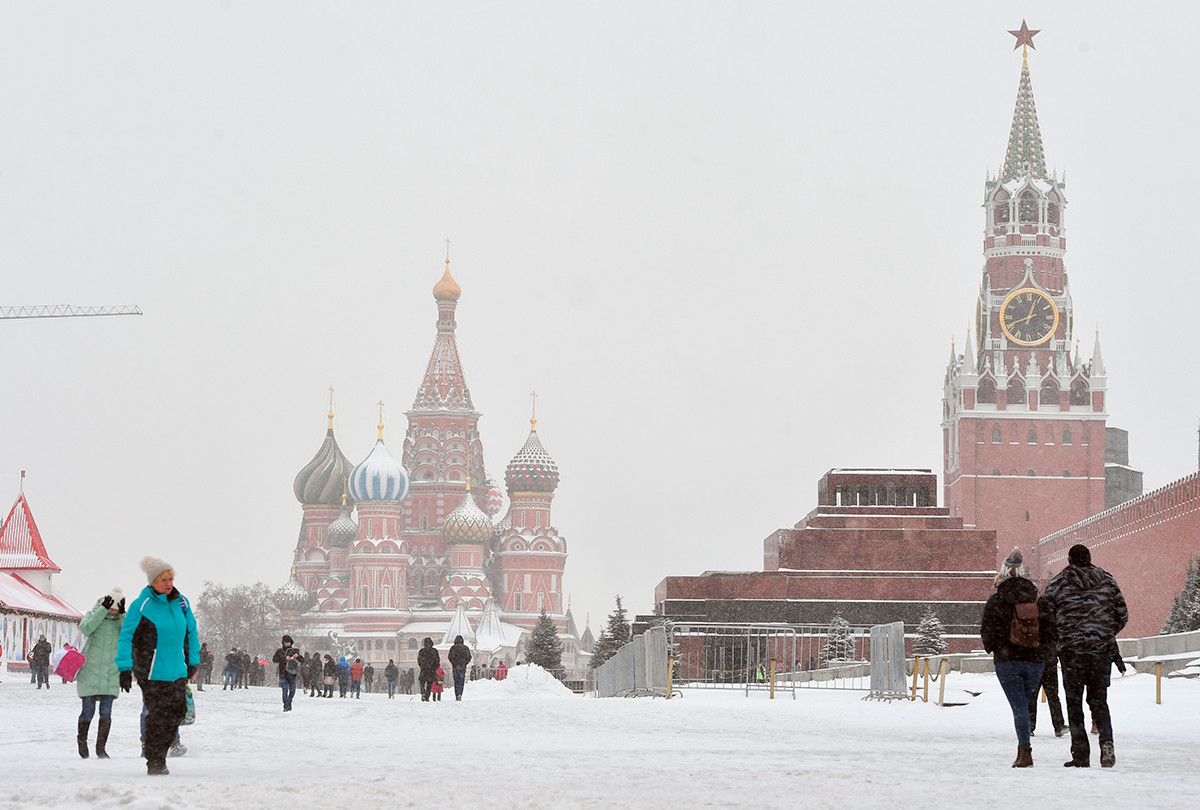 Two unwritten rules of every resident of St. Petersburg are very indicative: wear gray all the time and take an umbrella everywhere you go.

There are also cities in Russia where the sun does not even rise for more than a month. 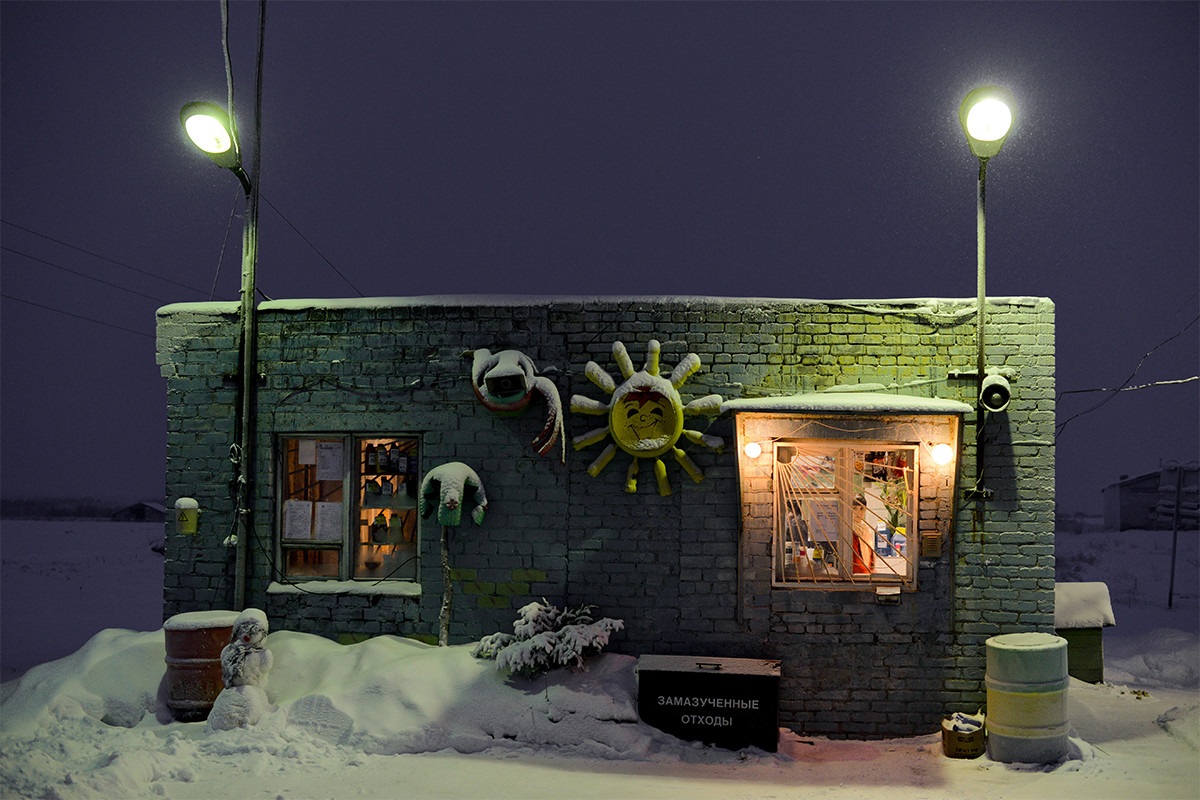 Take all this into account next time you wonder why some places in Russia appear gray sometimes.

Naturally, there are places in Russia that rarely look gray. Click here to take a glimpse at one of the most cheerful cities in Russia!