Why did Cossacks & Caucasusian people need THESE? (PHOTOS) 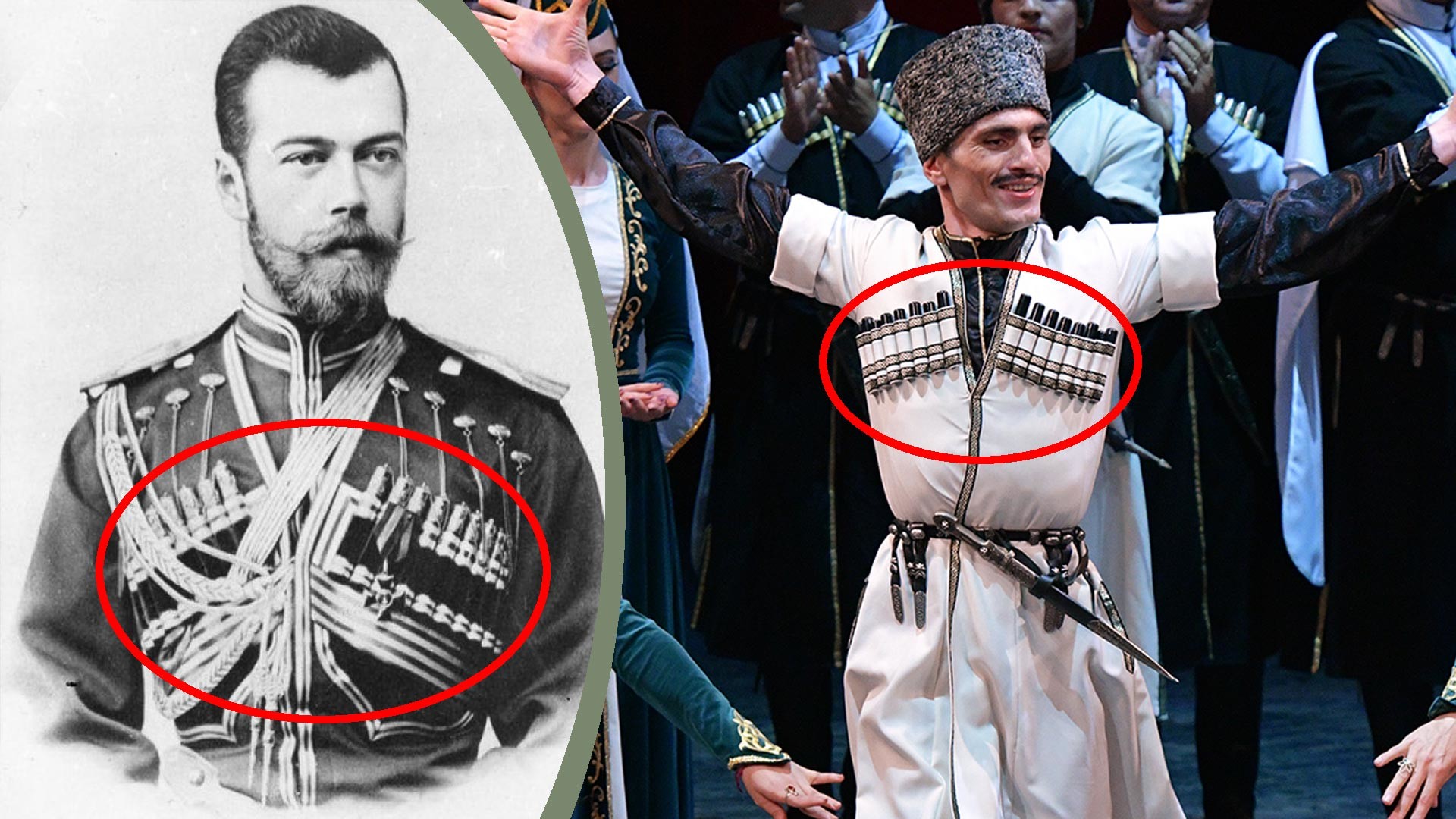 russiainphoto.ru; Tomas Tkhaitsuk/Sputnik
Special, small breast pockets were a distinctive feature of the national dress of many peoples of the Caucasus, as well as the Cossacks. What did they keep in them? 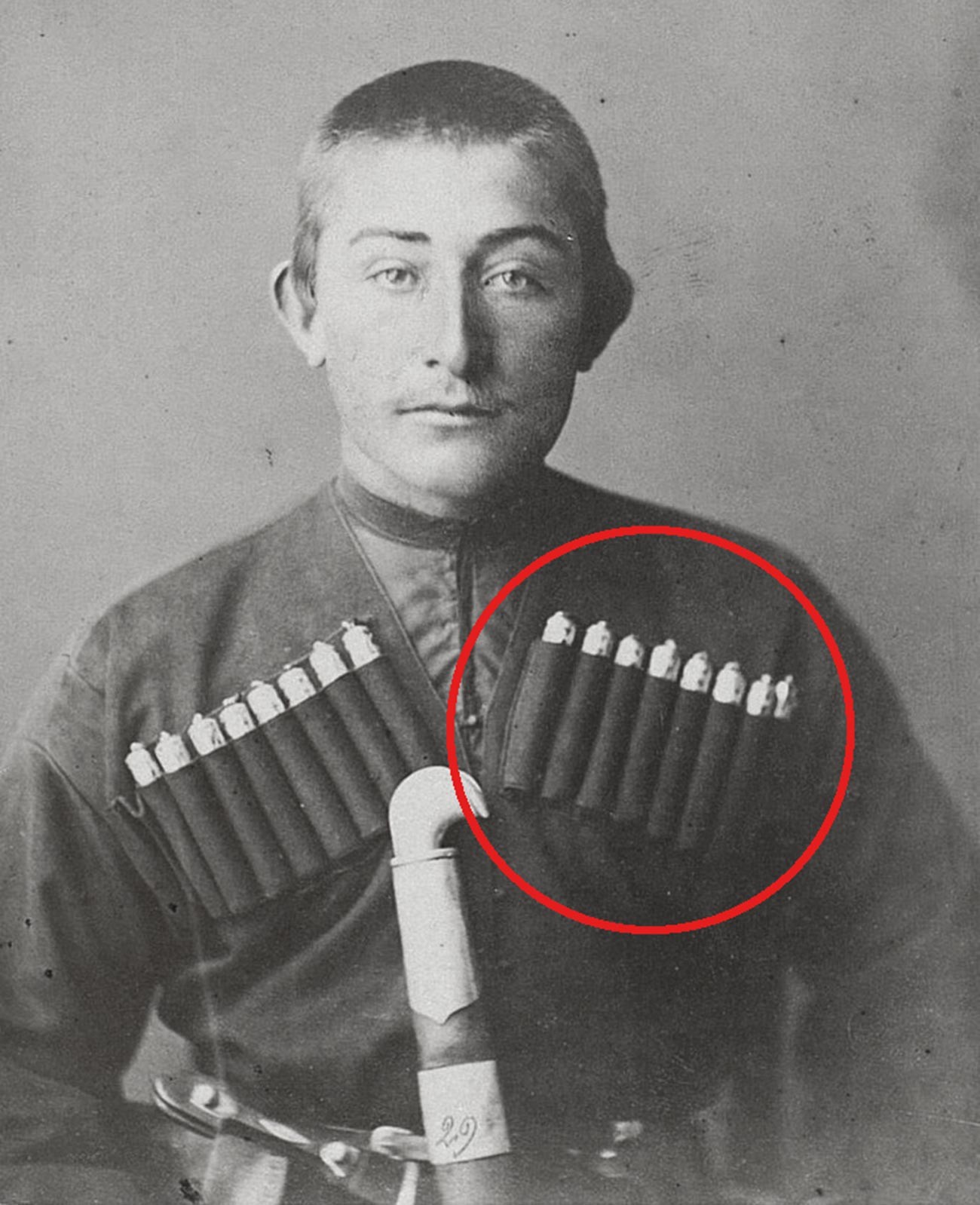 A man from a Dagestani village

In popular culture of the Soviet period, these small pockets were associated with the national costumes of the Caucasus - which, by the way, were rarely worn - and with… Balbes, a character in the cult comedy, Kidnapping, Caucasian Style. The movie has an episode in which the protagonists change into pseudo-Caucasian outfits and Balbes, played by actor Yury Nikulin, keeps his cigarettes and lighter in these small breast pockets of his costume. 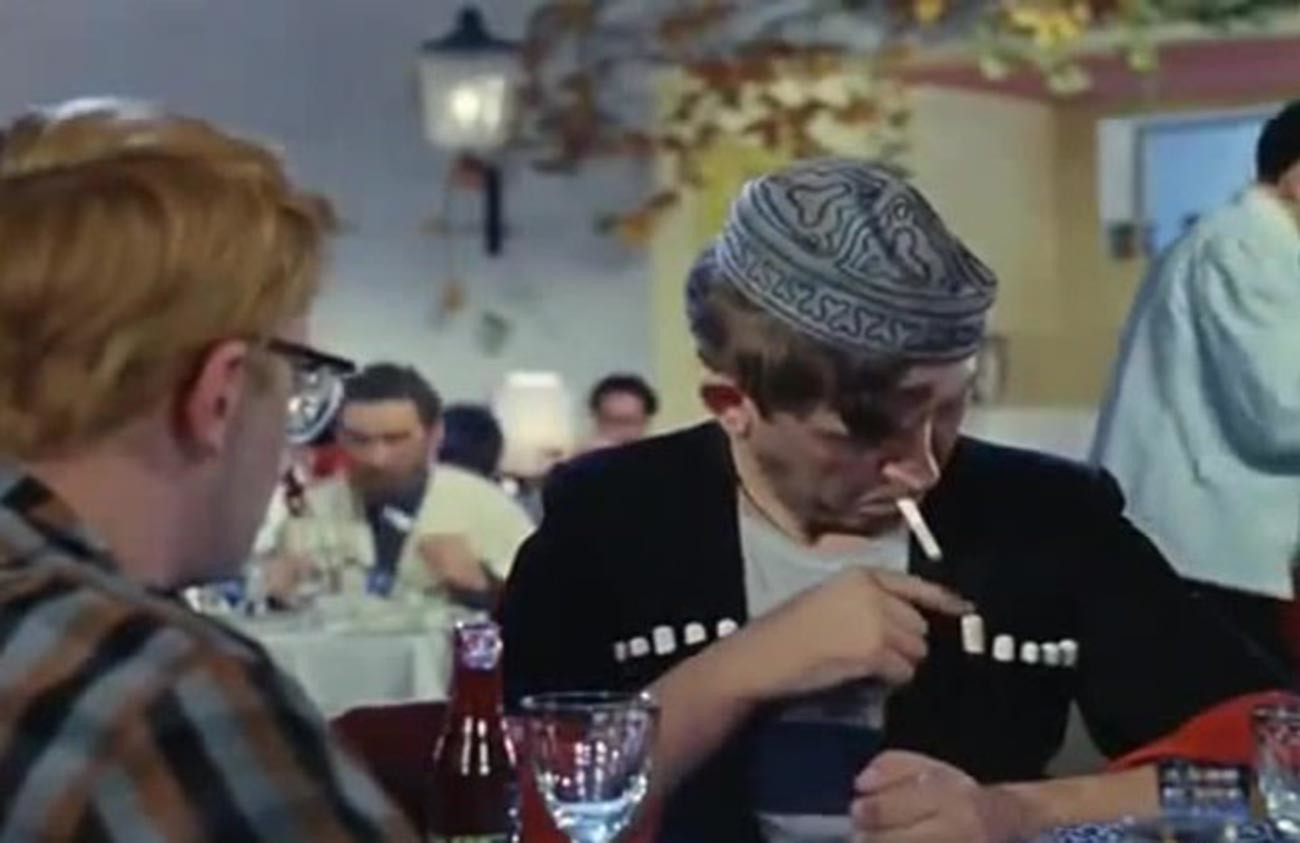 This element of the outfit is actually called gazyrs. Many peoples of the Caucasus - from Georgians, Chechens and Ossetians to Kabardians and the Adyghe - had them sewn onto the breast of their coats. The first time Russians saw such a style of dress was when they encountered the Cherkesy (Eng.: “Circassians”), hence historically a caftan with such pockets is called a cherkeska in Russian. 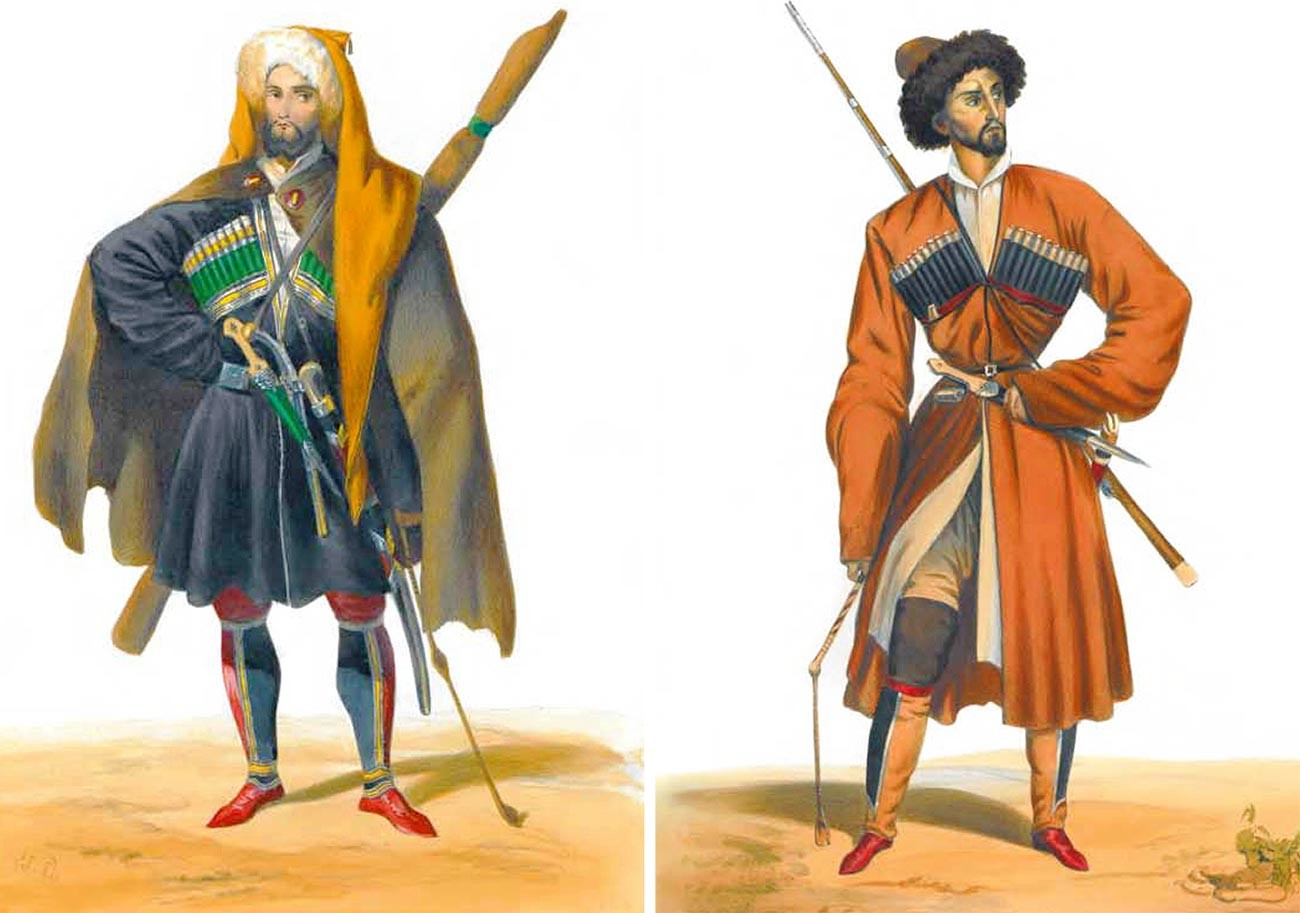 A Cherkes man (L) and a Kabardian man

Gazyrs appeared on cherkeskas in the 18th century with the advent of firearms. Bullets and a pre-measured quantity of powder were placed in small loops of cloth or leather. They were essentially cartridge belts. Thanks to the gazyr pockets, powder stayed dry. 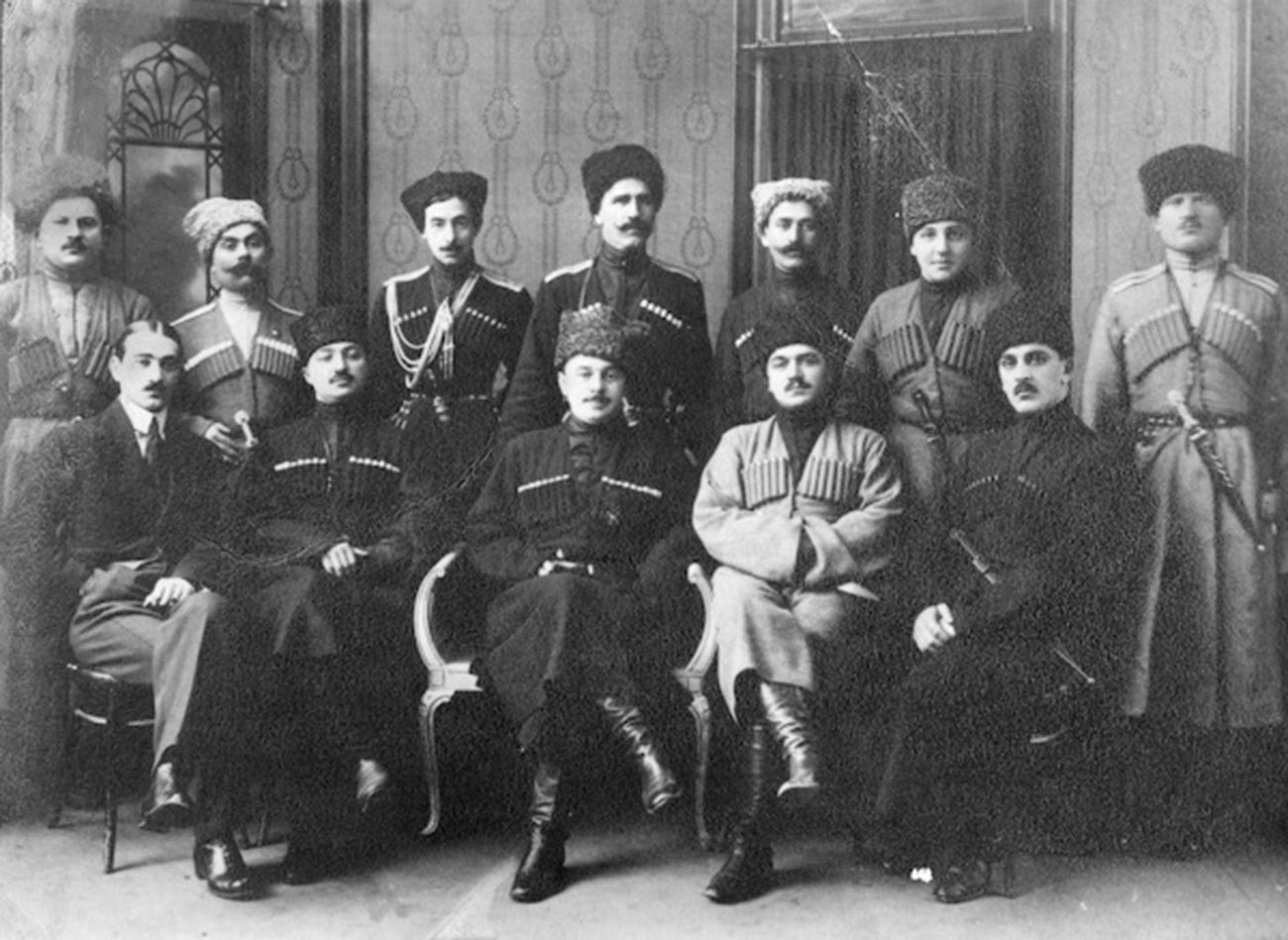 Leaders of the Mountainous Republic of the Northern Caucasus, 1917-1920

In the compartments closest to the underarms, tinder for lighting and, later, a special device - a percussion primer - were stored. There could be between four and 18 gazyrs on each side. Incidentally, they were not initially sewn onto the breast - special gazyr pouches, worn across the shoulder or attached to the belt, were used instead. 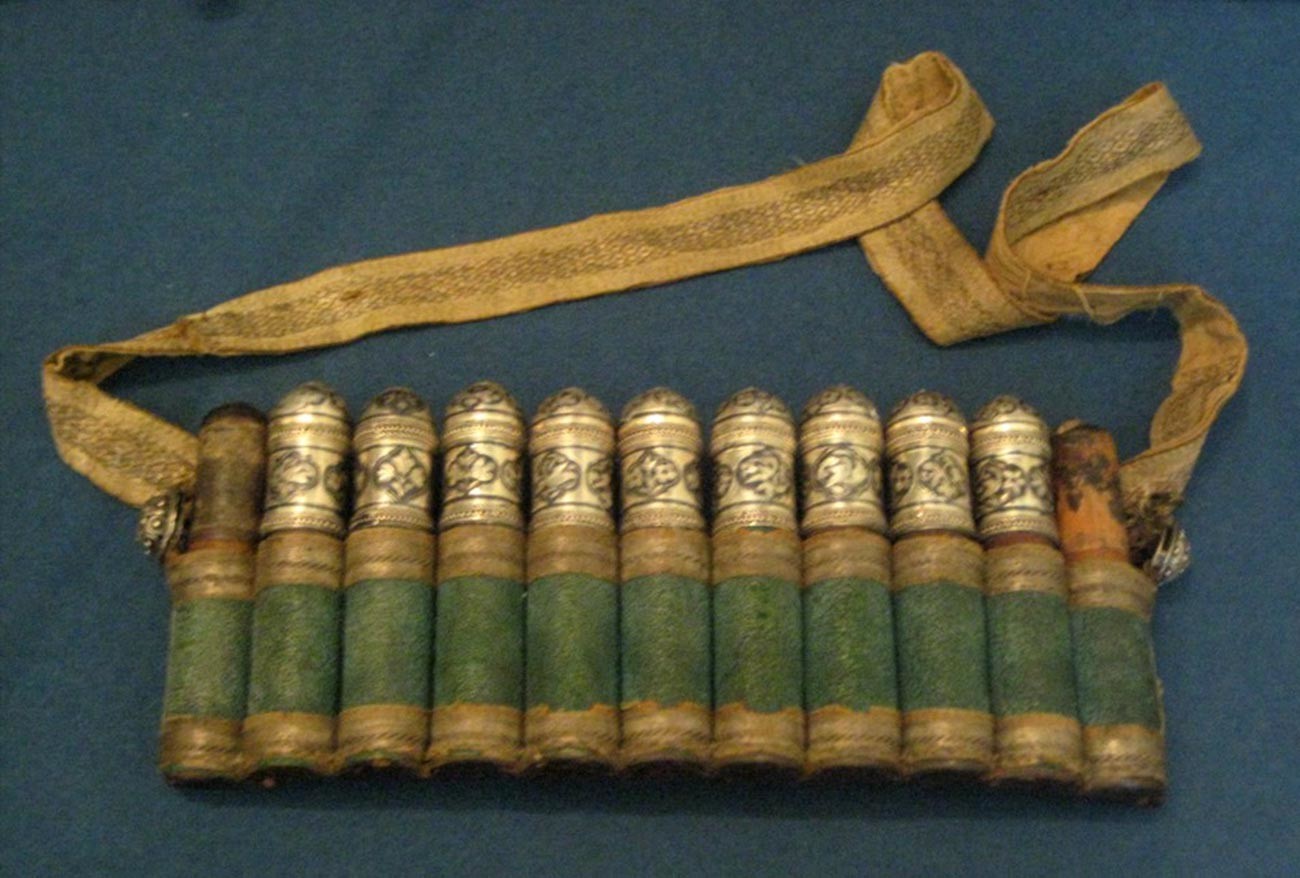 Many Caucasian men fought on horseback so the main function of gazyrs was to enable the horseman to load a gun while on the move. 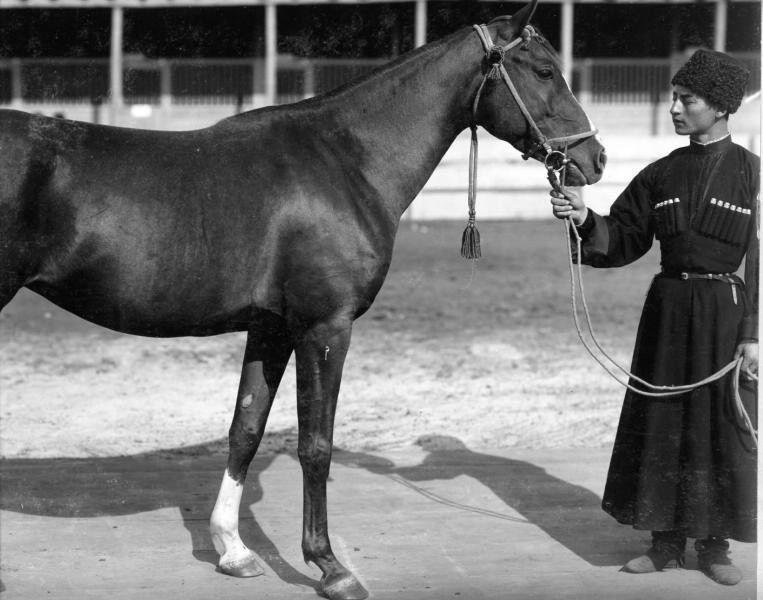 A man posing with a horse that he was going to sell, 1900s

In the 19th century, the Russian Empire started to conquer the Caucasus and the mounted Cossack troops adopted many elements of Caucasian dress - sheepskin hats, felt cloaks, curved sabers and cherkeskas adorned with gazyrs. 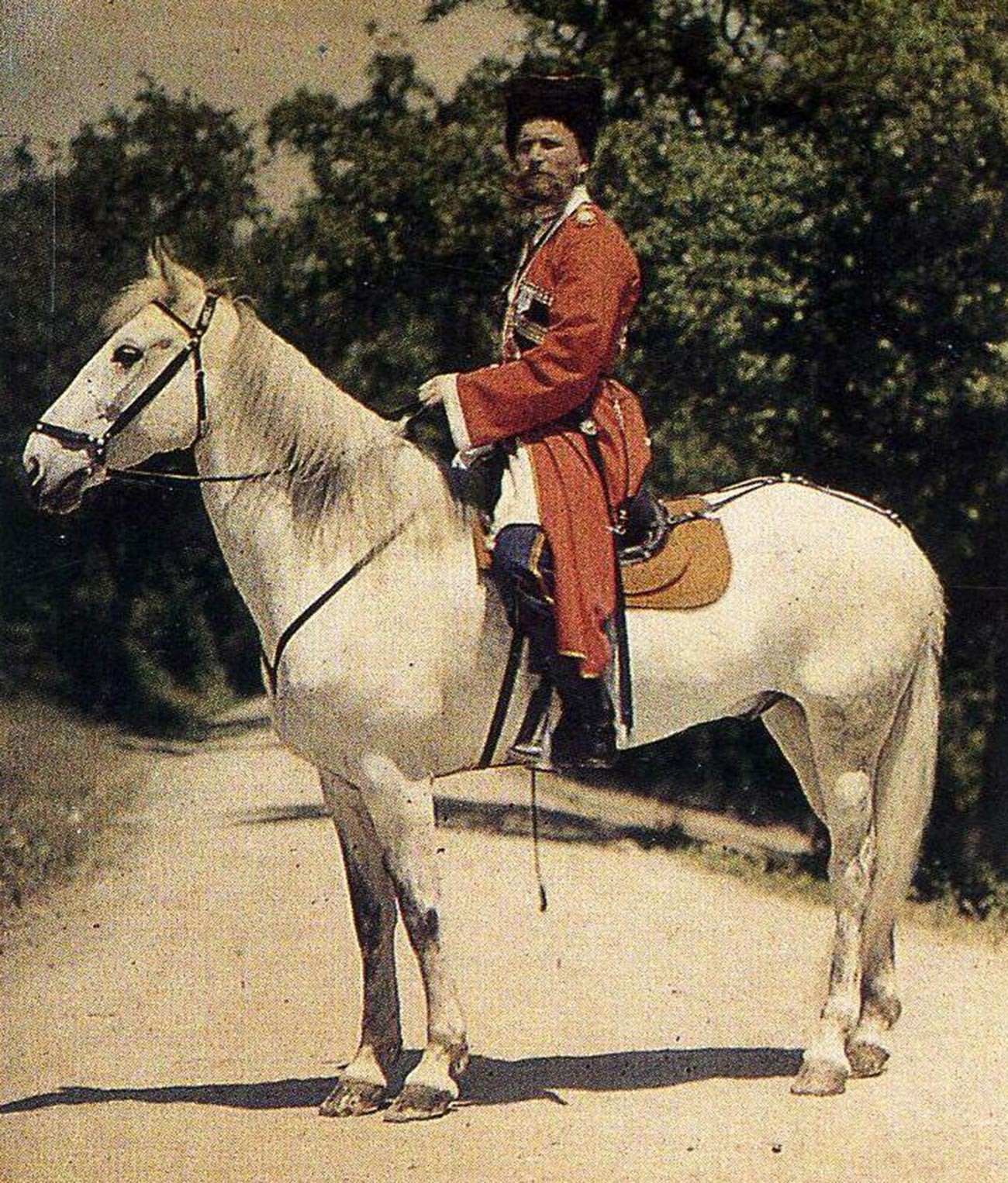 A Cossack from the Emperor's personal guard, 1910s

Gazyrs with silver tips were regarded as a special luxury. By the way, Emperor Nicholas II liked to dress up in a cherkeska adorned with gazyrs, although in his outfit they were just a decorative detail. 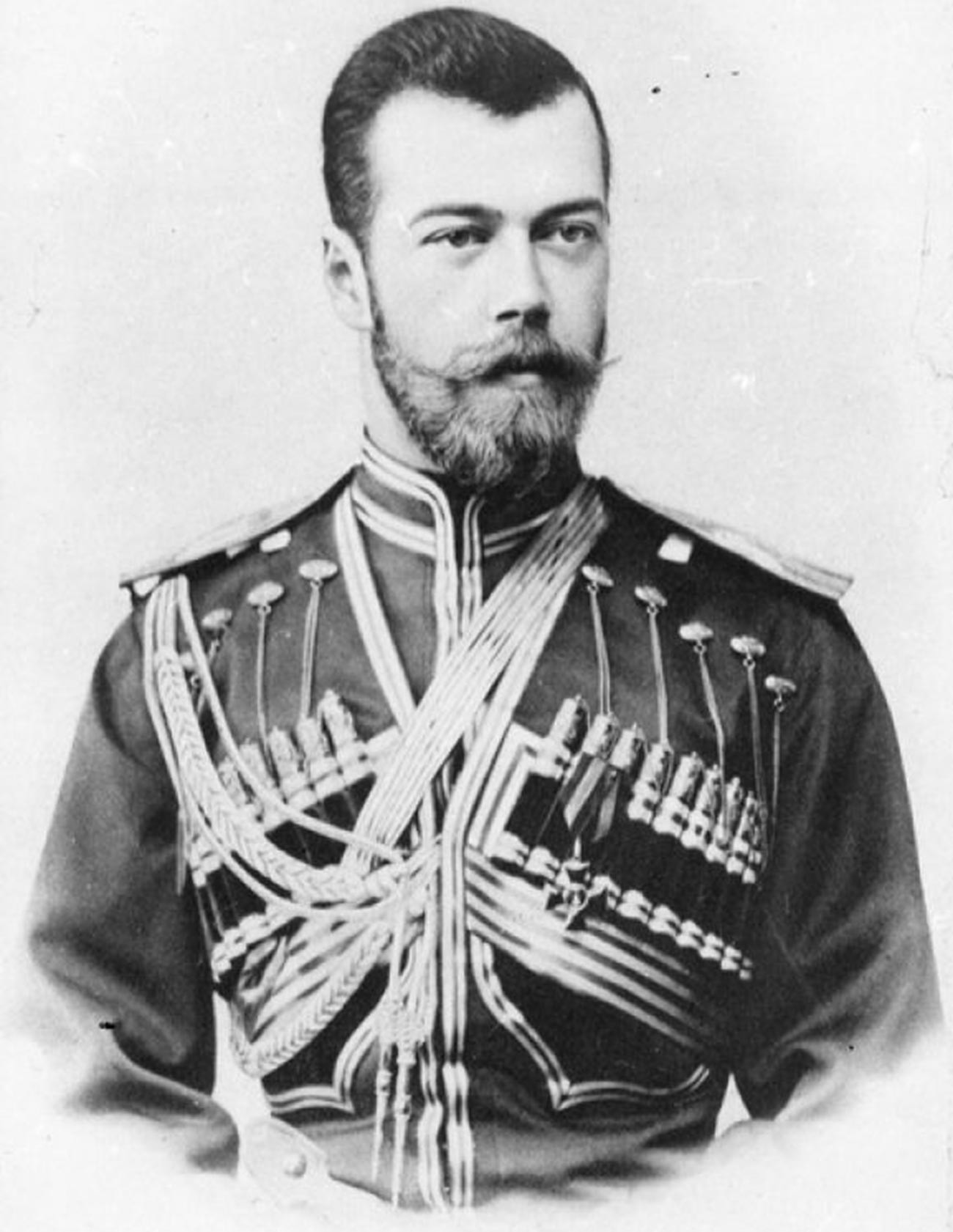 The most famous Cossack (after the movie character Balbes) known for wearing a cherkeska adorned with gazyrs was Baron Wrangel, general of the Russian Imperial Army and later one of the leaders of the anti-Bolshevik White Movement, in which the Cossacks played a prominent role. Wrangel’s everyday uniform was a black caftan with gazyrs sewn onto it. For this unusual outfit he was even nicknamed the ‘Black Baron’. He also had a white ceremonial uniform with gazyrs. 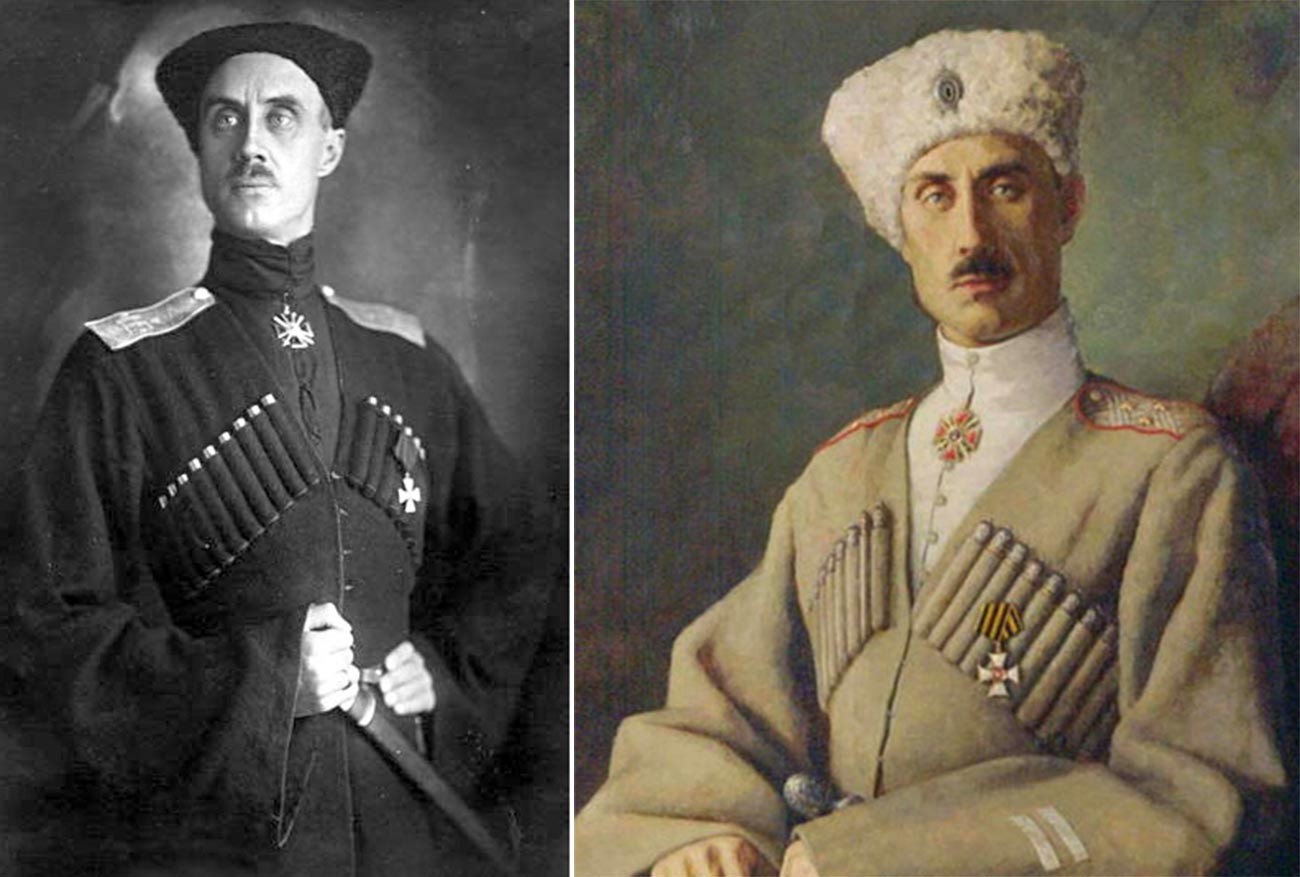 Cossacks also served under the Soviet authorities and the by-then-traditional uniform was accorded respect in the Soviet Union - in the 1945 Victory Parade Cossacks spotted both gazyrs and military decorations on their chests. 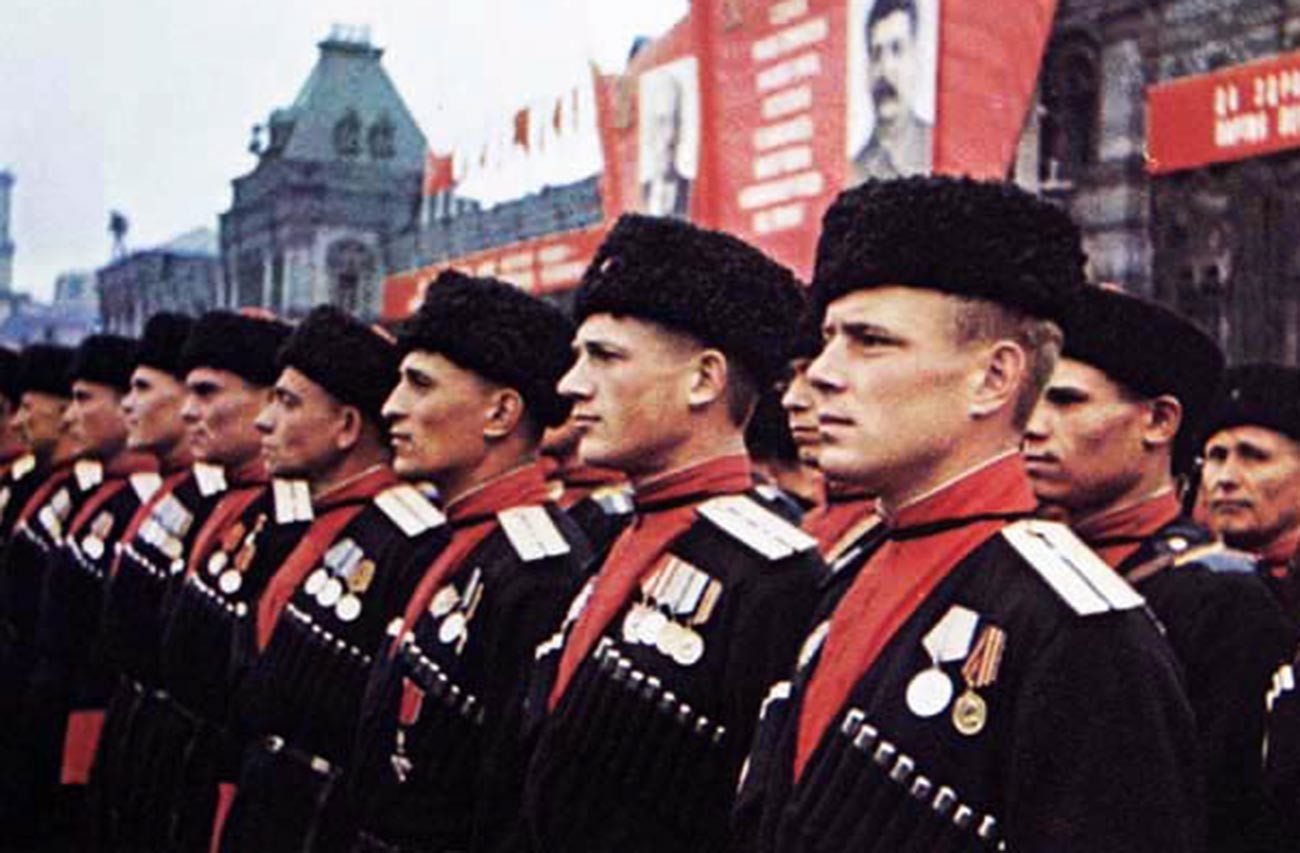 Kuban Cossacks on Red Square during the VIctory Parade of June 24, 1945

These days, a cherkeska adorned with gazyrs can often be seen worn by members of national dance troupes. 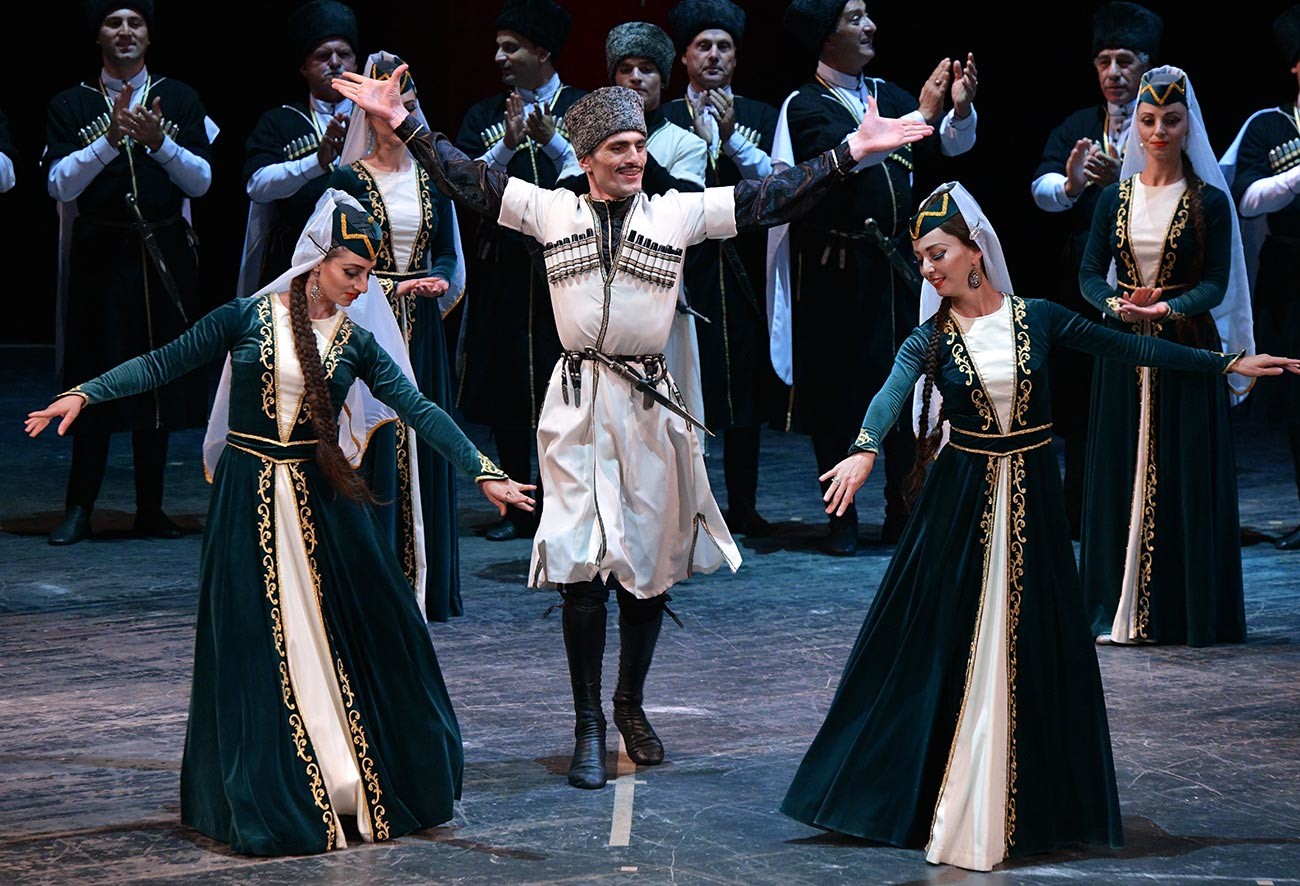