Russian tradition: The history and secrets of the president’s New Year’s address 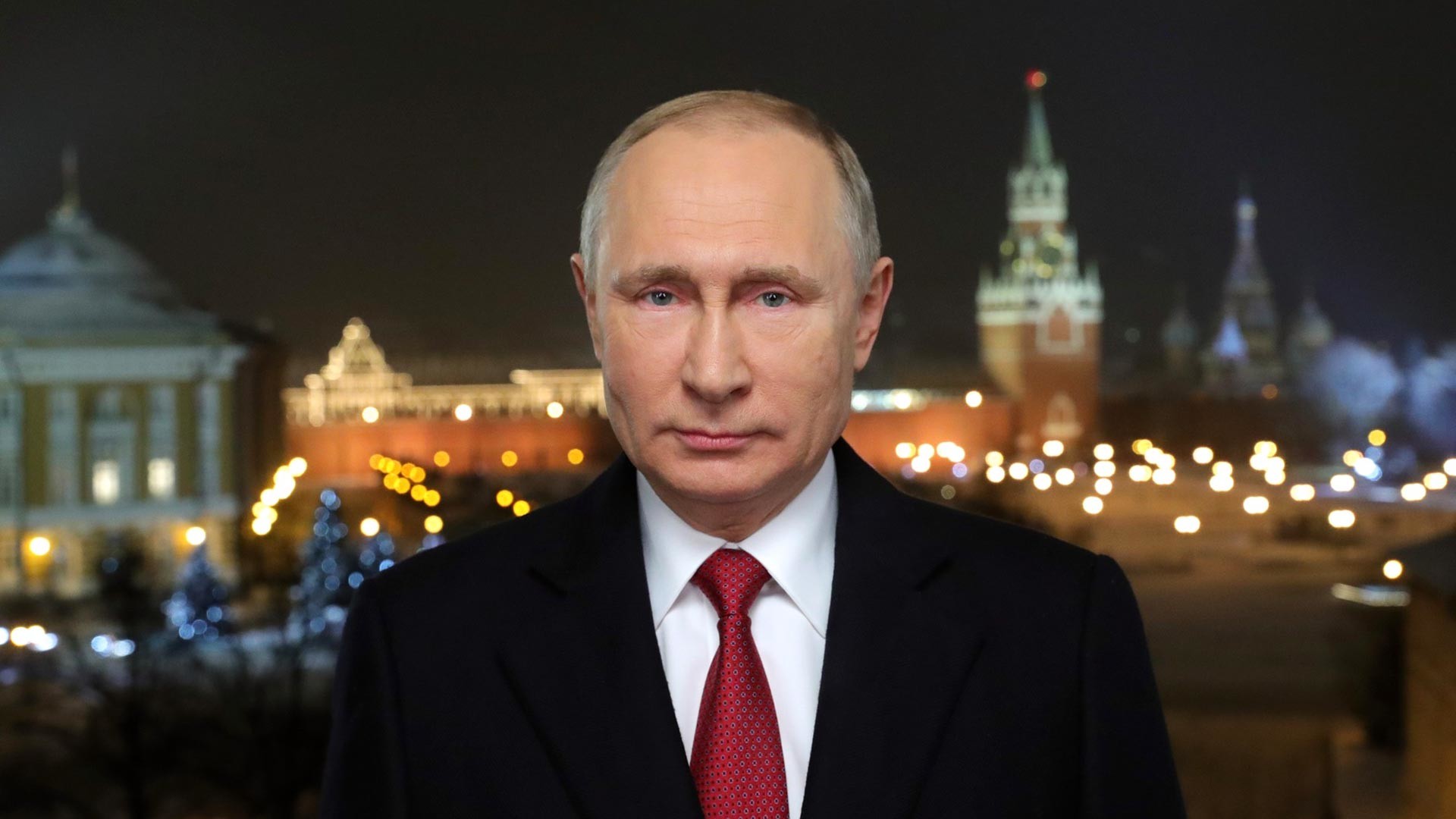 Kremlin.ru
The New Year’s address of the president is an integral part of Russian New Year celebration.

The New Year’s address to the nation is a tradition that began in Russia during Soviet times. It started with the address from Mikhail Kalinin, the chairman of the Central Executive Committee of the Soviet Union. He gave a speech on December 31, 1935, on the radio, but it was only broadcast to the polar explorers. Kalinin’s next speech on December 31, 1941, was already directed towards all the Soviet people and was dedicated to the events of the war. 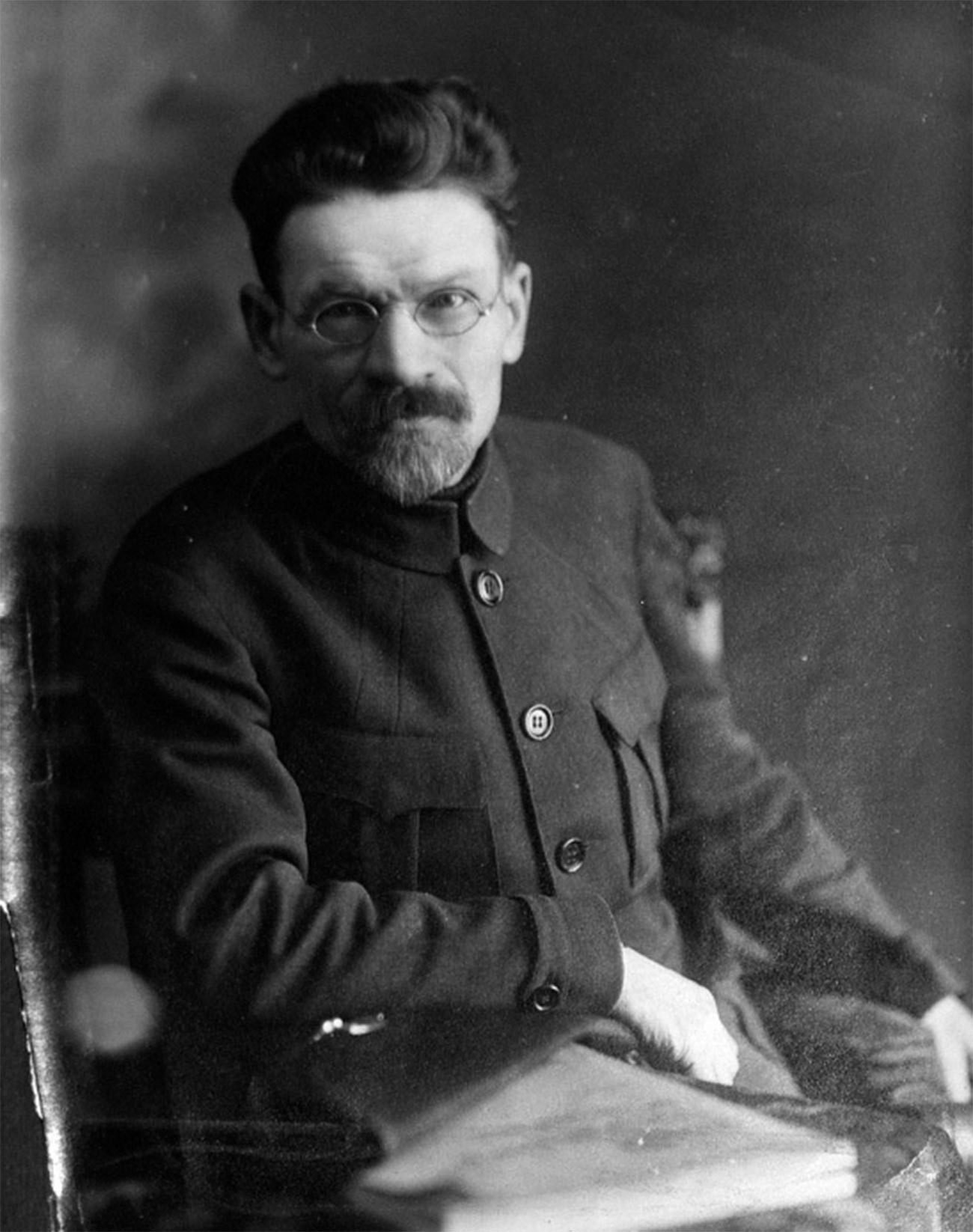 Kalinin kept his tradition until his death in 1946, after which it was interrupted. In 1954 and 1957, the New Year’s congratulations were given by Marshal Kliment Voroshilov, the then chairman of the Presidium of the Supreme Soviet. After that all congratulations came from the Soviet administration generally.

The pioneer of TV addresses to the Soviet people was General Secretary Leonid Breznev. He gave his first address in 1970, but it wasn’t the form we are now used to: The speech of Brezhnev was more like a detailed annual report than a congratulation. At the end of 1970s, due to Brezhnev’s illness, the addresses were made by a famous news announcer Igor Kirillov. Later, both Yuri Andropov and Konstantin Chernenko wouldn’t appear on TV with a congratulation, either.

In 1985, General Secretary Mikhail Gorbachev changed the situation and made the address himself. But the New Year speeches in 1986-1988 were quite extraordinary: Gorbachev swapped places with Ronald Reagan, so the Soviet leader spoke to the American nation and the president of the U.S. - to the Soviets. It symbolized the end of the Cold War.

The next unusual address occurred in 1991. In December of that year Gorbachev resigned. The speech of Boris Yeltsin, the president of the Russian Republic, was shown on December 30, so the actual New Year’s address (which usually begins a few minutes before midnight) wasn’t made by the head of state, but by famous satirical writer Mikhail Zadornov. Zadornov didn’t fit into timing, but he spoke live, so the viewers heard the chime of the bells of Spasskaya Tower a minute after midnight.

The following year, Yeltsin officially became the president of Russia and went on to make his address every year. He spoke from his office in the Kremlin and, in 1994, at the end of his address, he raised a glass of champagne. No General Secretary or other addresser had ever done that before. In 1997, Yeltsin was even accompanied by his family. In 1999, an unexpected thing happened: The address from Yeltsin was shown at noon and he didn’t just congratulate the Russians, but announced his resignation and admitted it was a difficult decision. At the usual address time before midnight on December 31, Yeltsin’s resignation speech was repeated and following it the speech of Yeltsin’s successor, Vladimir Putin, was shown.

Since then, both Russian presidents, Vladimir Putin and Dmitry Medvedev, have never missed their addresses.

The process of making

In 2015, Dmitry Peskov, spokesman of Vladimir Putin, joked that the president traditionally makes his address at midnight on New Year’s Eve. However, it isn’t a secret that the speech is recorded beforehand. Russia has eleven time zones, so there is no other way. The filming takes place on one of the evenings in the second half of December: The actual date depends on the weather and the president’s schedule. And there is no need to wait until midnight: the filming commences as soon as it gets dark (which in Moscow is usually at around 15:30 at the end of December!).

An hour before, trained falcons clear away any ravens that inhabit the Kremlin. There are enough of them to make the noise loud enough to deafen the president’s speech, so the measures are taken. 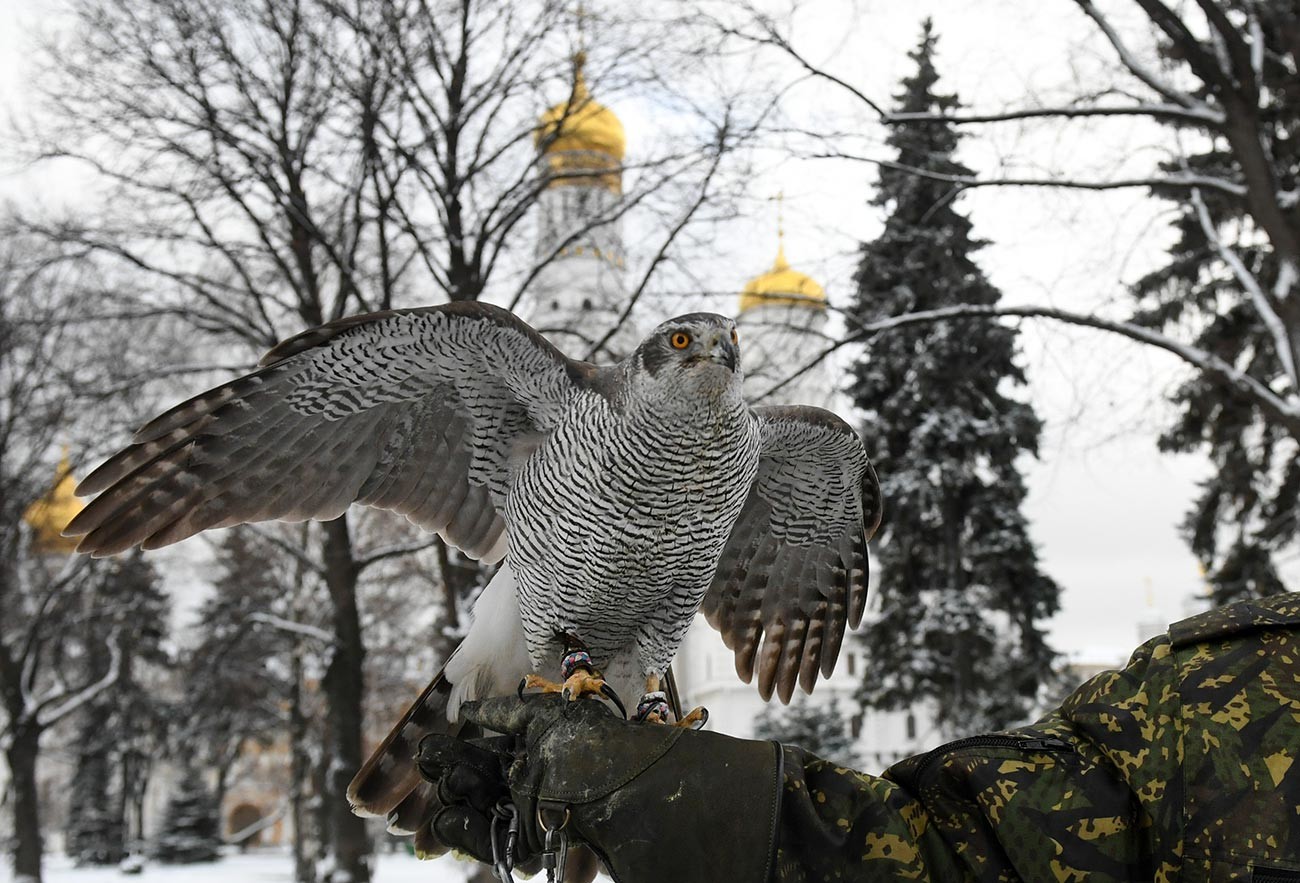 The preparations start before the president arrives at the place. The film crew sets the equipment in presence of the president spokesperson who takes part in a little rehearsal to check the settings. The president arrives when everything is ready. He usually needs several attempts to get the perfect take. But he doesn’t need to learn the speech by heart, as the text is shown on the teleprompter like those that TV journalists use in news programs. The whole filming usually only takes about 20 minutes.

In the New Year’s address, the president often summarizes the whole year, speaks about the progress that the country made during it. For example, in 2004, Vladimir Putin marked the economical success and, in 2014, he remembered the Olympic Games in Sochi. Also, the president makes wishes to the country and people. Dmitry Medvedev always wished the Russians love and happiness; in 2009, he was sure that the country would overcome any difficulties it faced. Vladimir Putin, in 2015, wished Russia prosperity and well-being. After all the president’s speeches, the bells of Spasskaya Tower chime. There is a tradition to make your own wish during the chime. Then the national anthem of Russia sounds. 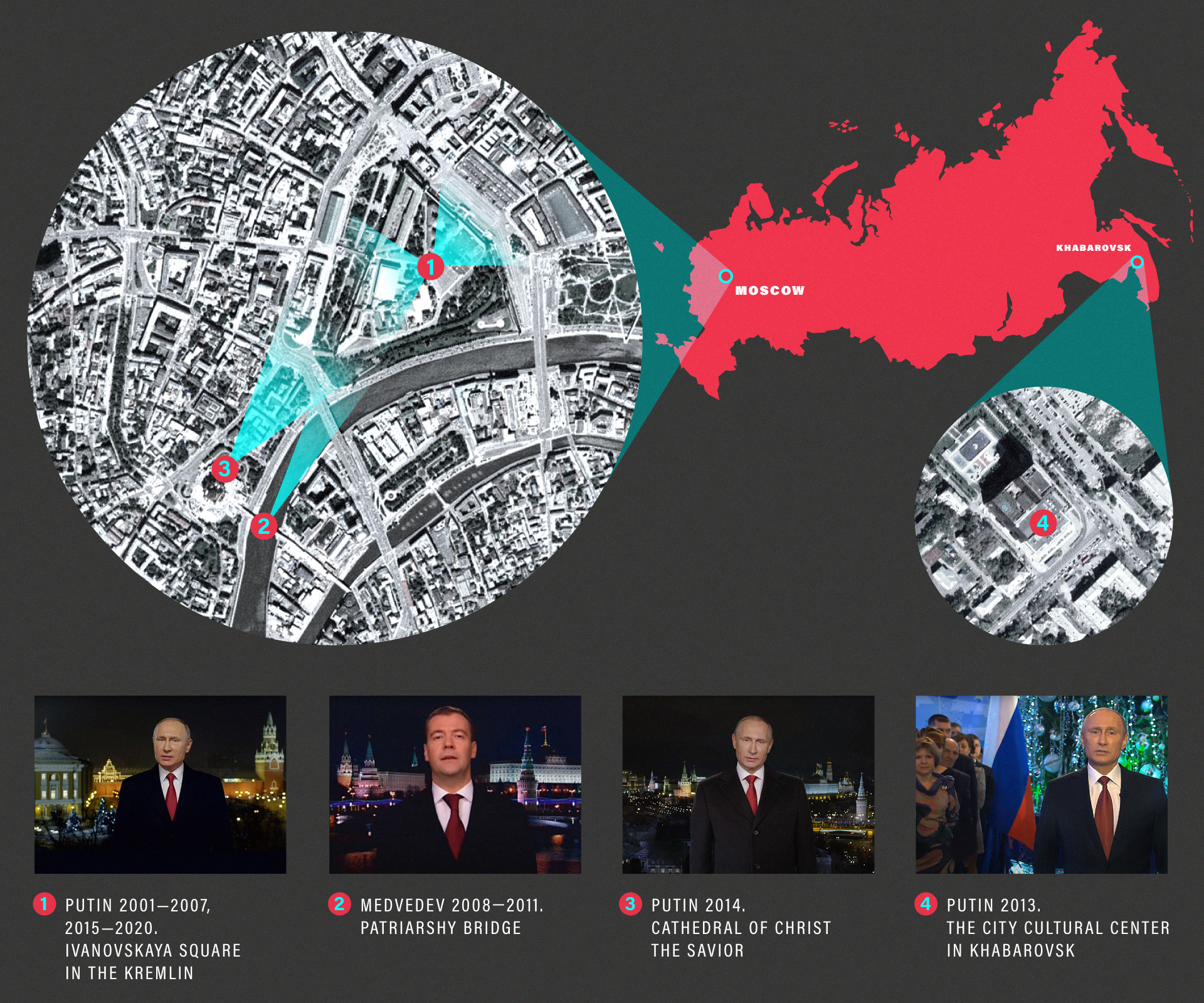 Unlike their predecessors, Putin and Medvedev always left their office to film the New Year address. They have traditional places for doing it. Putin usually speaks from Ivanovskaya Ploshchad in the Kremlin. Here he can change the background: sometimes we see the State Kremlin Palace and Troitskaya tower like in 2001-2007, or the Kremlin Senate and Spasskaya tower like in more recent addresses.

Medvedev, while president, used to make his addresses in 2008-2011 from Patriarshy Bridge. The whole Kremlin was his background. In 2009, his address was recorded too early, and the Moskva River hadn’t frozen yet. Its flowing waters were perfectly seen in the address. But in 2011, the recording was made after 9 p.m. on December 28. The car access to the ‘Krasny Oktyabr’ (“Red October”) factory buildings was blocked the whole day from the morning hours.

Sometimes, Putin does change the location. In 2013, he even changed the city: He went to Khabarovsk (6,140 kilometers east of Moscow) to support the people who had suffered from catastrophic floods at the Far East in the fall of that year and during the New Year celebrations in the City Cultural Center he re-recorded his New Year’s address. The reason was that two terrorist acts killing 34 people had happened in Volgograd on December 29 and 30 and his initial address had been recorded before that. It was decided to mention both the floods and the terrorist attacks in the speech. The whole country saw the new version, except some Far East regions like Kamchatka Krai (6,670 kilometers east of Moscow), due to the time difference.

Another change of location occured in 2014. Spasskaya Tower was under reconstruction, so it was covered in scaffolds, so it was decided to record Putin’s address that year from the allure of the Cathedral of Christ the Savior. It gave the view of the whole Kremlin with its surroundings like Mokhovaya Ulitsa and Kremlyovskaya Naberezhnaya as the president’s background.

In 2018, it was estimated Vladimir Putin’s address on ‘Pervy Kanal’ (“Channel One”) was watched by 15,1% of the country. It meant that the New Year’s address from the president became the most popular New Year “show” ever on Russian TV. And the tradition of watching the president’s speech on New Year’s Eve is as strong now as it ever was.