Why is a cannon fired every day at noon in St Petersburg? 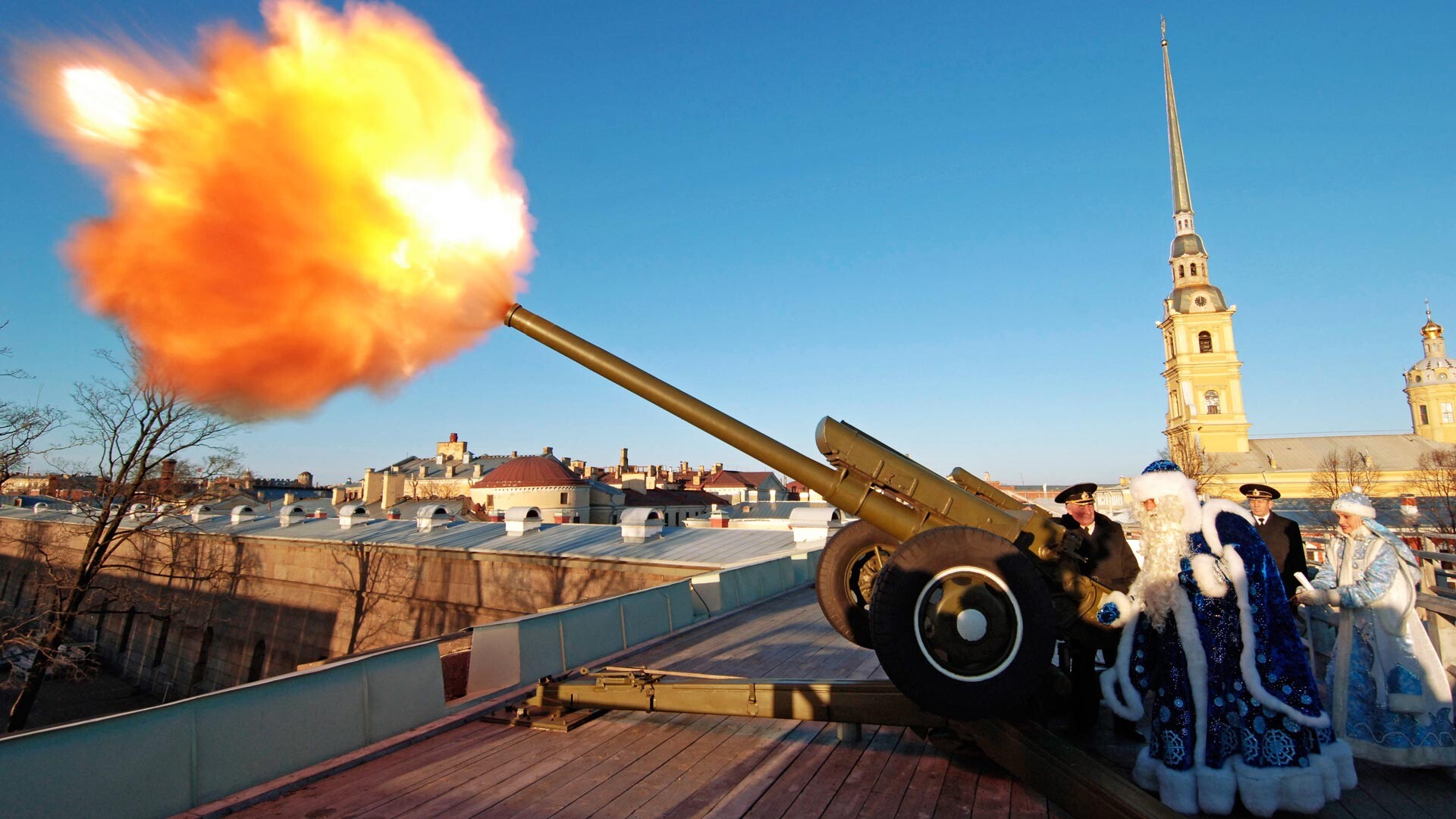 Father Frost firing the gun at the Peter and Paul Fortress

Sergey Kompaniychenko/Sputnik/Sputnik
Every day, a loud volley from a signal cannon sounds in the city center. What’s behind this ancient tradition and who invented it?

St. Petersburg, Russia’s northern and (still) cultural capital, is very proud of its history. Great care is taken to preserve the historical center and customs that date back to tsarist times.

“One of St. Petersburg’s traditions is the firing of a signal cannon at midday from the Naryshkin Bastion of the Peter and Paul Fortress,” reads the city’s charter, adopted in 1998. Tourists passing by the fortress at noon who don’t know about it might get a scare. The shot is loud enough to be heard on Nevsky Prospekt and, in calm weather, around 5-10 km away.

How the tradition began

Back when the city was only just being built, in 1703, Peter the Great ordered that cannon shots be fired from the Peter and Paul Fortress every day to announced the start and end of work (and, more importantly, lunchtime). After Peter, however, the practice was abandoned.

The modern tradition comes from the navy. In 1819, Admiral Alexis Greig ordered a daily cannon shot in Sevastopol, at the base of the Black Sea Fleet, so as to synchronize all clocks – on ships, at the port and even in churches. Greig was the son of a Scottish naval officer and had studied naval affairs in England. It is possible that there he became acquainted with a similar tradition.

Later, other port cities introduced the idea, in particular Vladivostok and St. Petersburg. In the latter, by decree of the Ministry of the Navy, the first noon shot was fired in 1865. In those days, it was fired from a 60-pound ship cannon located in the courtyard of the Admiralty building. Seven years later, the gun was moved to the Peter and Paul Fortress, from where the midday shot rings out to this day.

Has it been fired ever since?

After the 1917 Revolution and the Civil War, the cannon was fired only occasionally on special occasions. And in 1934 the Soviet government canceled the midday shot altogether, as a bourgeois anachronism. 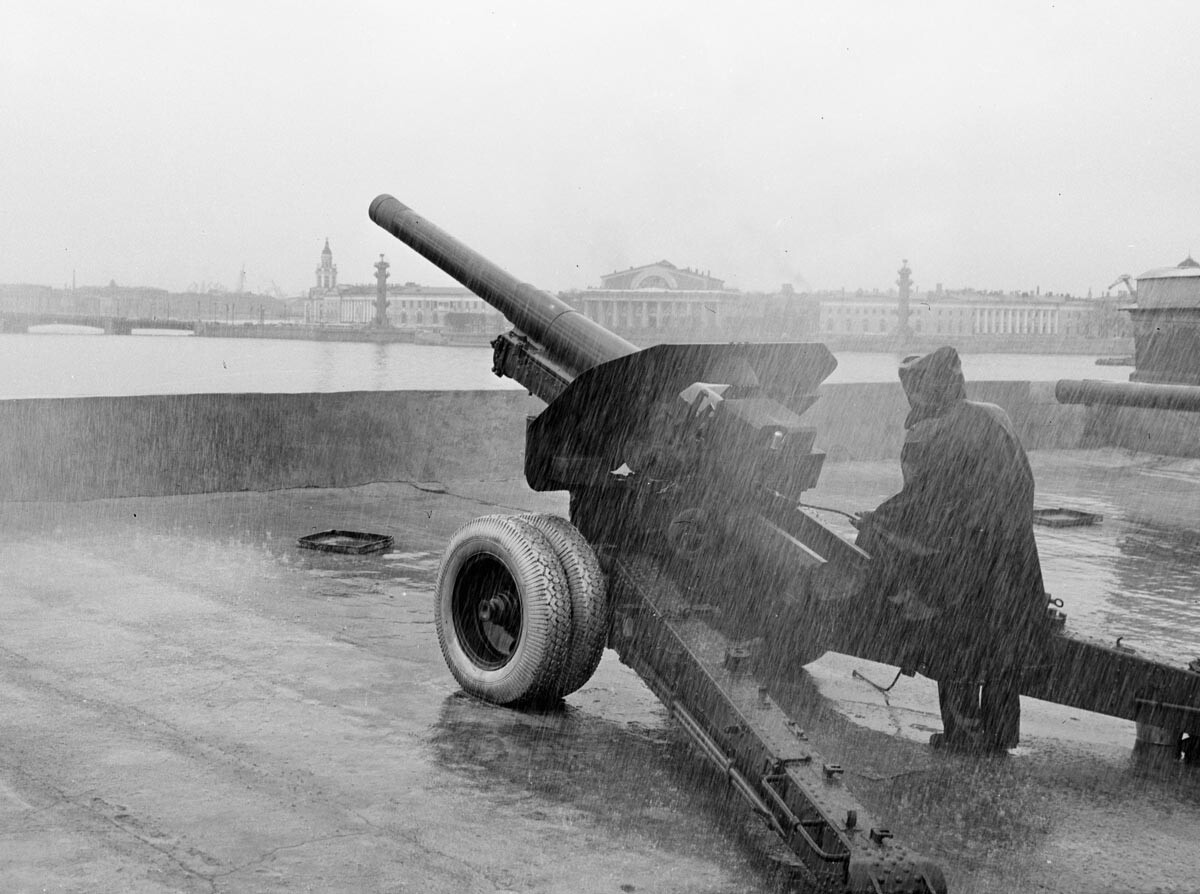 The tradition was revived in 1957, when the city celebrated its 250th anniversary (albeit four years late). The event had been due to take place in 1953, but was postponed by Joseph Stalin’s death that year, followed by the start of de-Stalinization.

On June 23, 1957, a cannon was fired once again from the Peter and Paul Fortress at noon, since when it has been a daily occurrence. Honorary guests of the city are sometimes invited to fire the ceremonial shot. 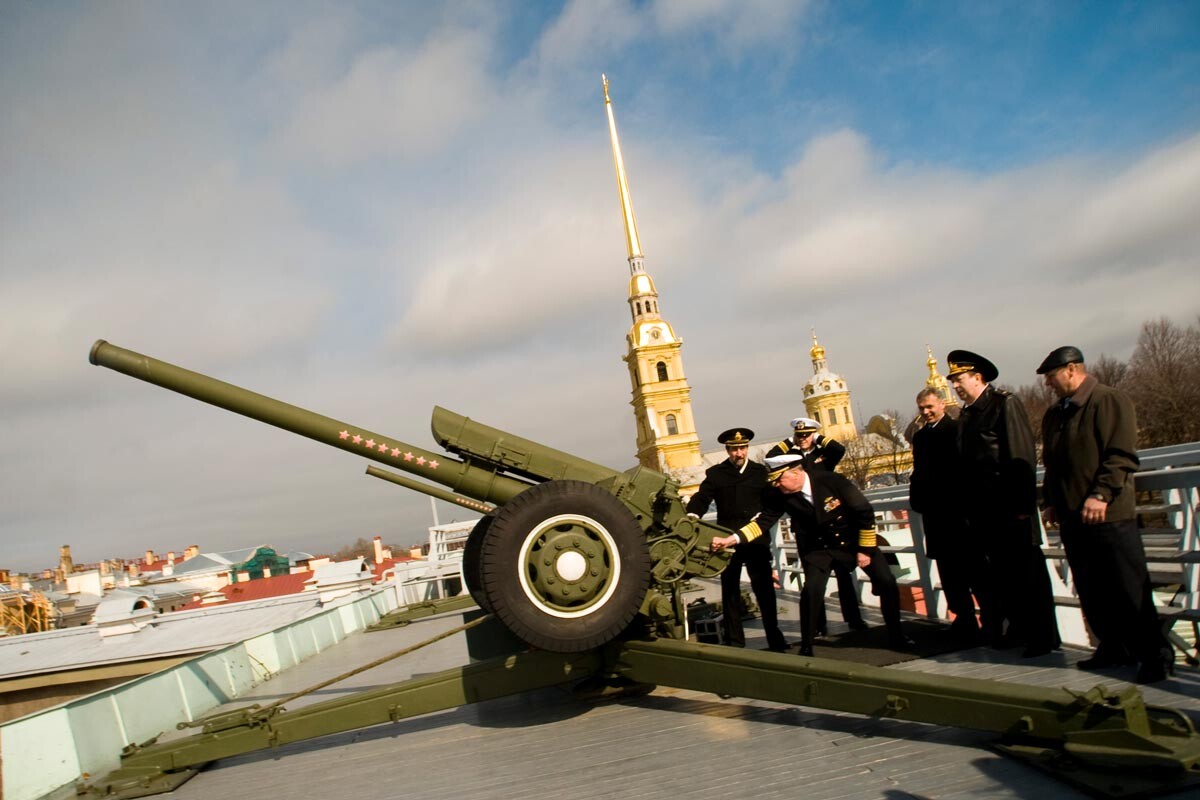 On January 7, 2019, Vladimir Putin fired the cannon to mark the Christmas festivities. 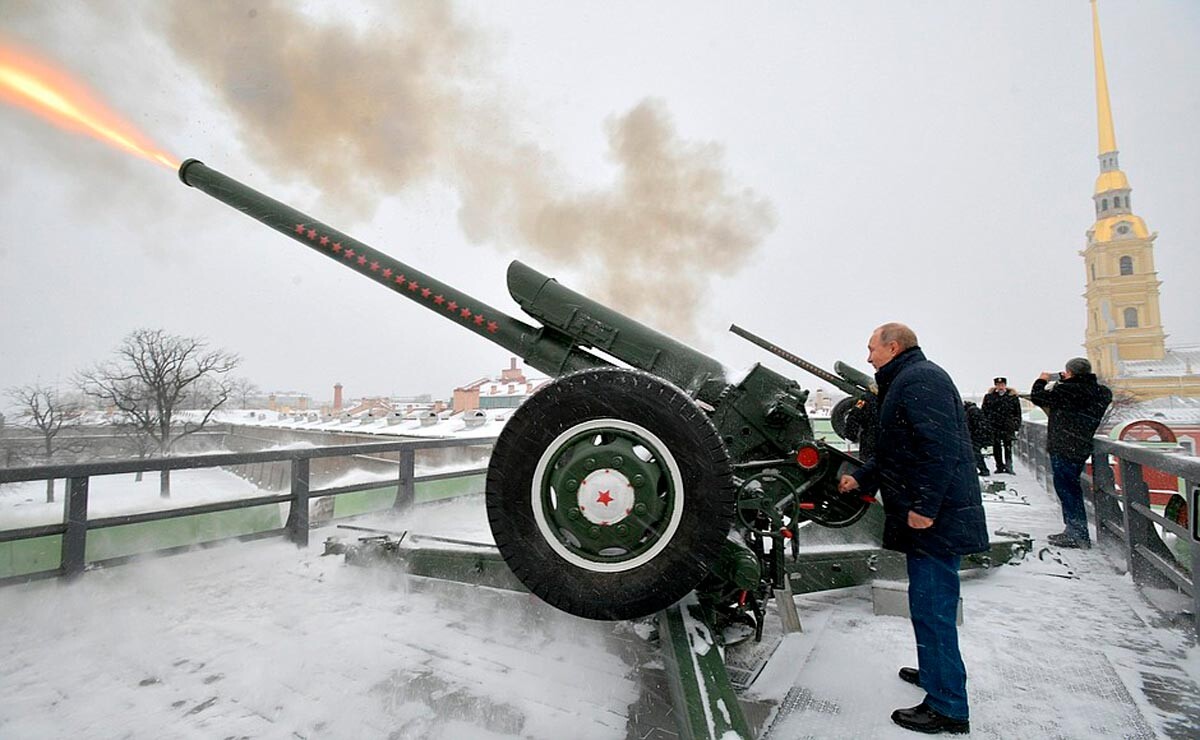 Vladimir Putin firing a cannon at noon at the Peter and Paul Fortress, 2019

How does the shot take place?

Incidentally, sometimes two shots are fired, from each gun at the same time. This happens on special occasions: public holidays or, for example, on the birthday of St. Petersburg University. The birth of the city’s five-millionth inhabitant in 1988 and New Year’s Eve ahead of the new millennium were also marked with a double salvo. No fewer than 21 cannon shots were fired in 1987, when the cruiser Aurora was welcomed home after restoration work. 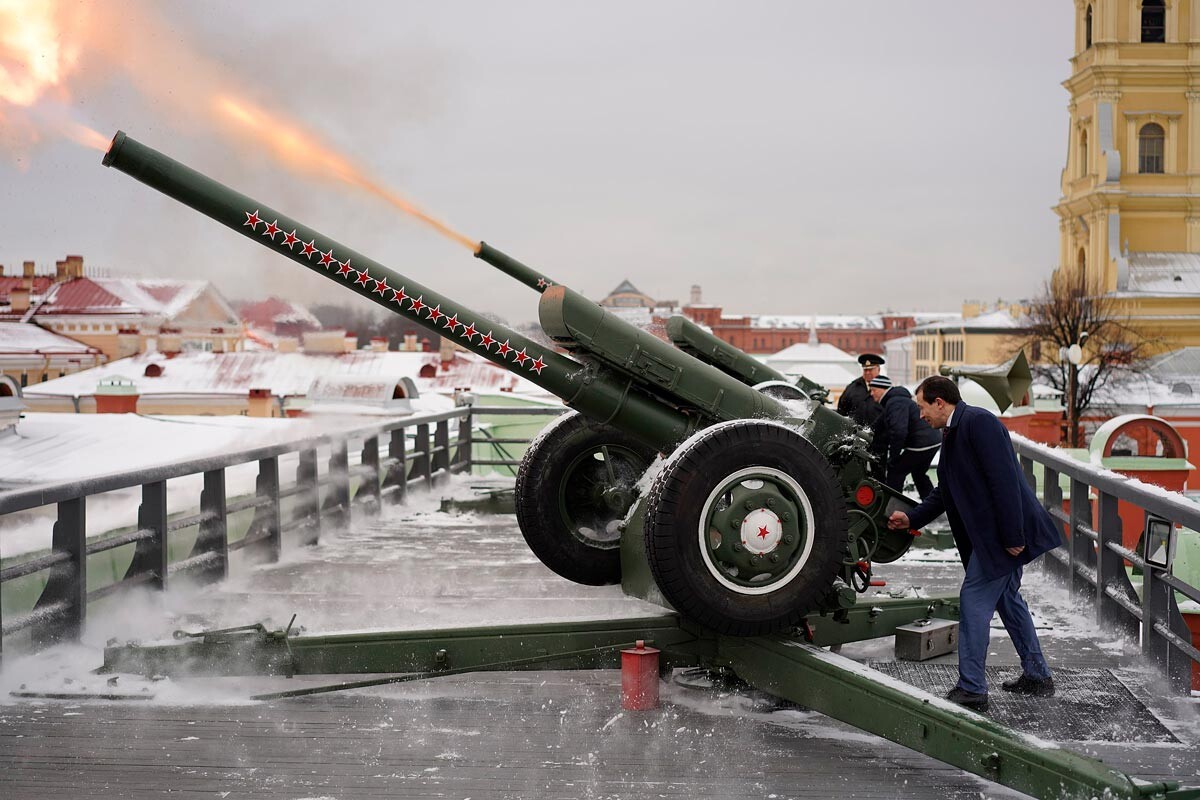 Simultaneous firing of two guns in honor of the birthday of St. Petersburg State University and the nuclear submarine team

At 11 a.m. sharp the duty officer checks the clock and starts the countdown. After that, two gunners – retired officers and employees of the Museum of the History of St. Petersburg, dressed in naval uniforms – get down to work. The shells are taken from the warehouse of the Naryshkin Bastion, where the cannon is located. For the blank shots, a mixture of two types of gunpowder is used: smokeless and smoke-generating (for show).

Fifteen minutes before the shot, the gunners are already in place beside the cannon, whatever the weather. The second cannon is also loaded in case the first misfires.

What else do I need to know about the midday shot?

Ever since Peter the Great, for military personnel and officials, the cannon also marks the start of “admiral’s hour” – a joke expression meaning late breakfast or early lunch (or brunch), during which a glass of something strong is permitted (to this day in Russia it’s considered “indecent” to drink before 12, but during “admiral’s hour” – you’re welcome!). 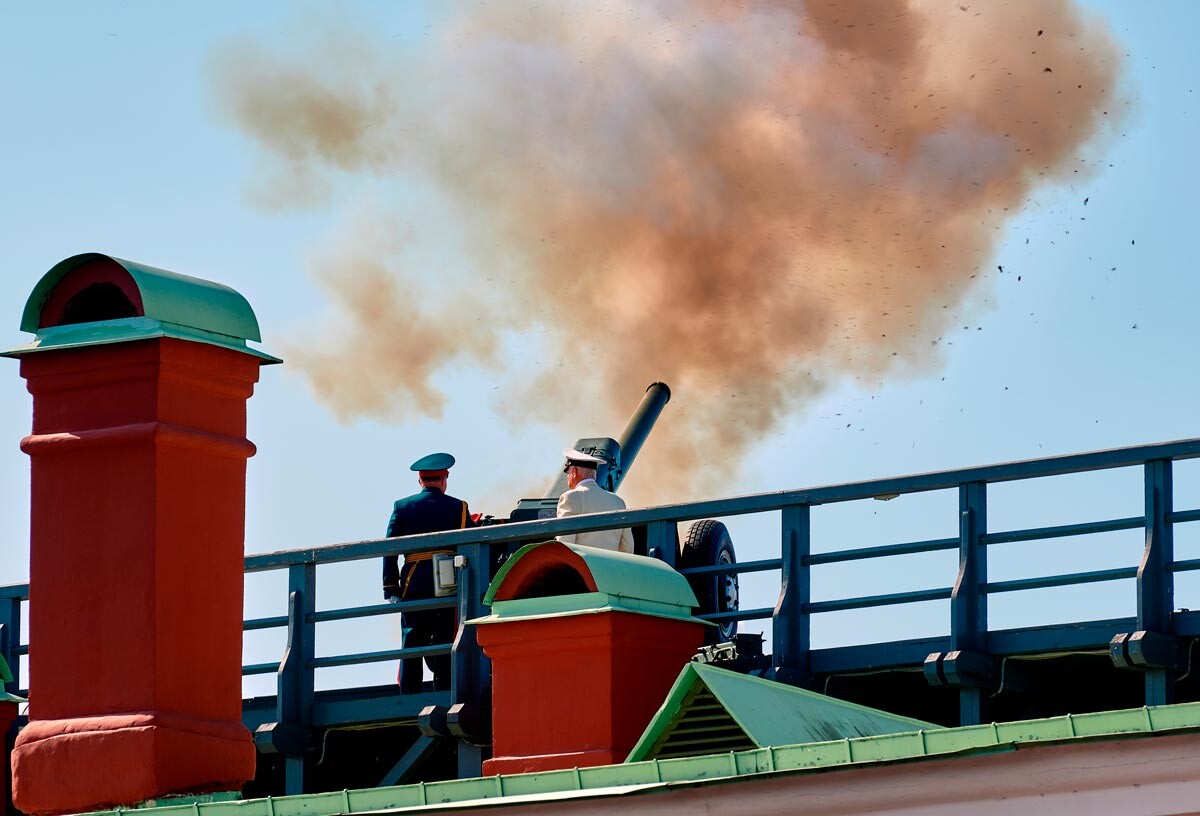 Midday gun shot at the Peter and Paul Fortress

Today, a midday shot is fired not only in St. Petersburg, but also in neighboring Kronstadt, as well as in two other naval cities of military glory: Sevastopol and Vladivostok.