How cats became symbols of St. Petersburg and its Hermitage Museum 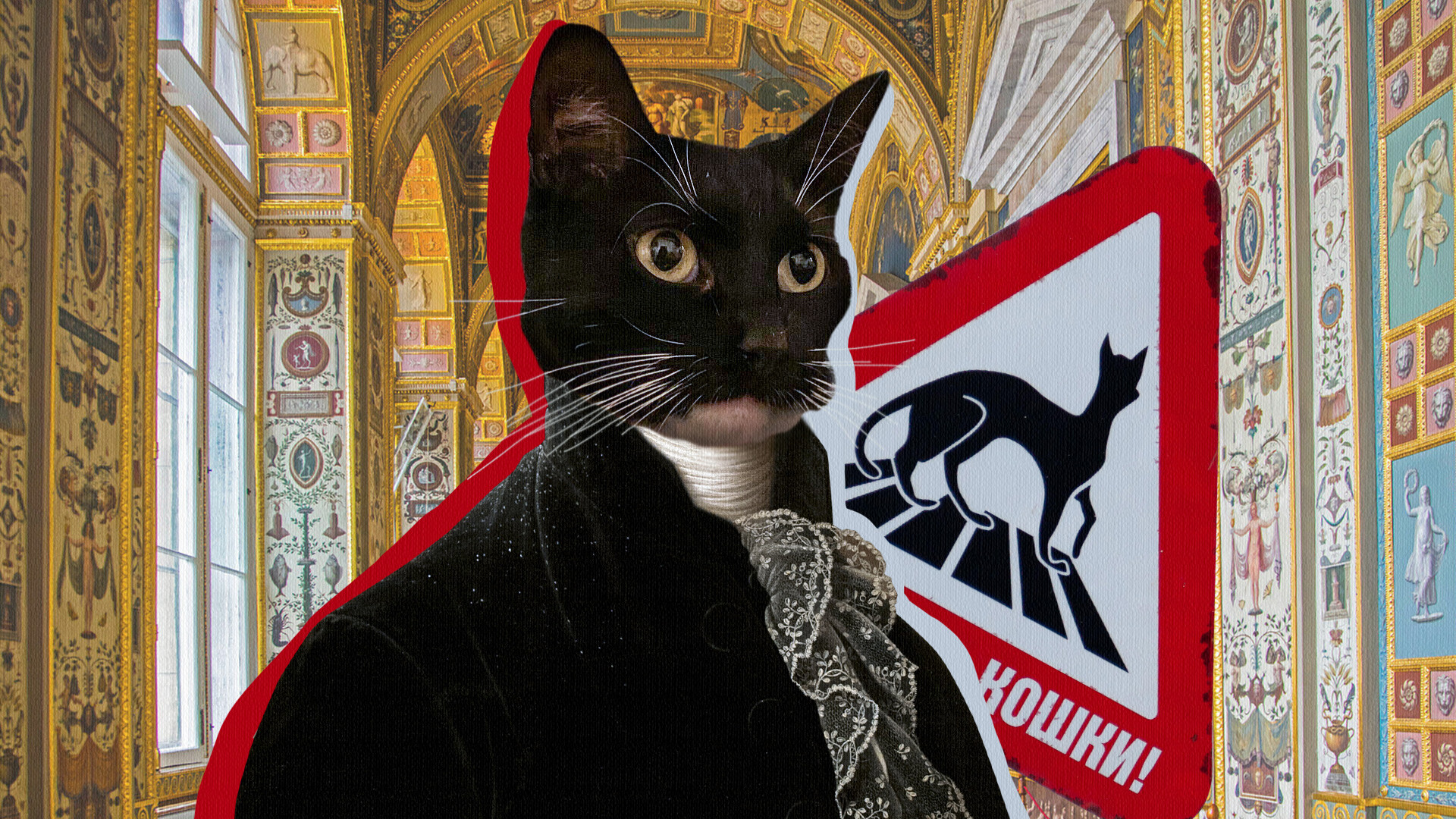 Kira Lisitskaya (Photo: Legion Media; Anna Sorokina)
St. Petersburgers have been celebrating ‘Cat Day’ for two days straight. The first praise is traditionally sung for the Hermitage bunch, living in the iconic museum’s basement, “guarding” the precious relics from pesky rats. The celebration then moves to the streets to honor the cats of the city!

“Alright, get in, since you’re here,” the black tuxedo cat with white “gloves” appears to be gesturing with its facial expression, ready to give me a tour of his domain, which consists of incredibly long basement halls full of warm pipes and tiny windows to the outside world. Lushka the cat and his numerous colleagues all “guard” the Hermitage Museum. Their task: to never let mice or rats into the Winter Palace or anywhere near the museum’s valuable exhibits. 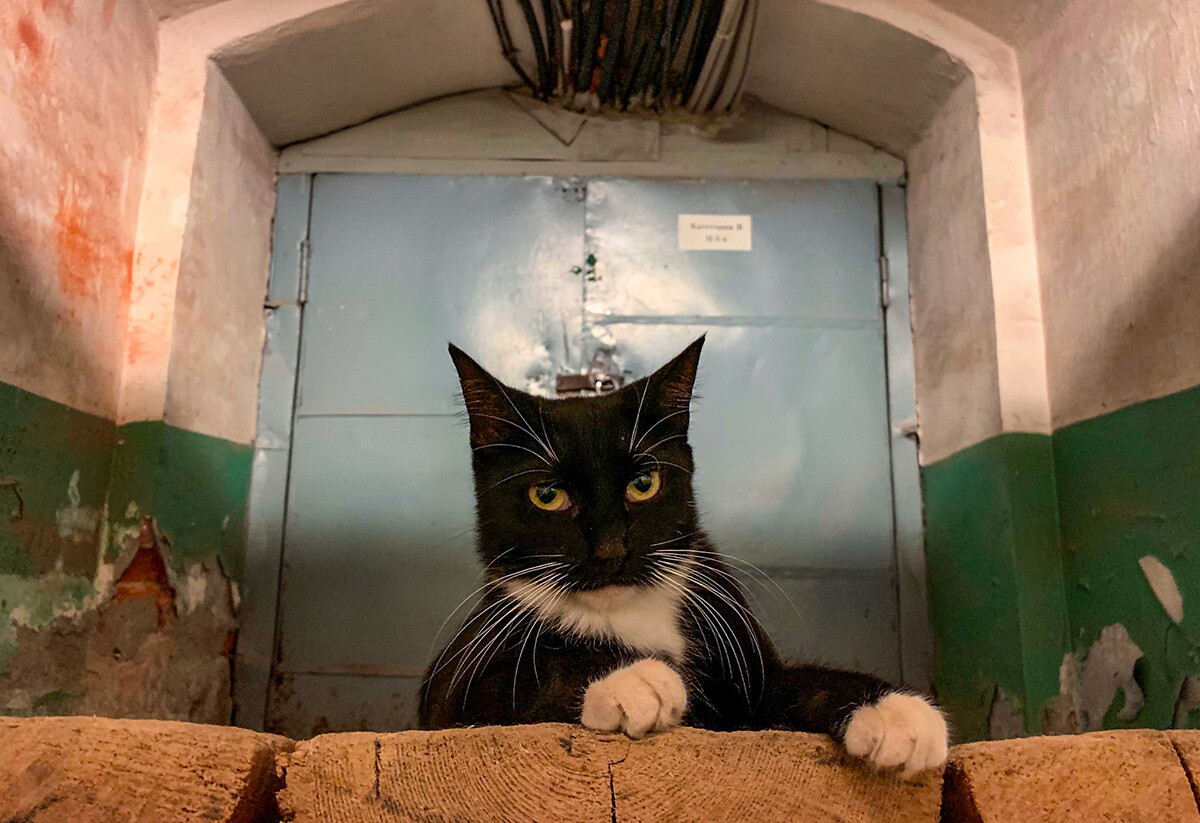 Lushka the cat at his working place.

Once a year, the Hermitage opens its basements and invites visitors to get acquainted with the cats living there. This happens on Hermitage Cat Day, sometime in late May to early June.

Where did the Hermitage cats come from? 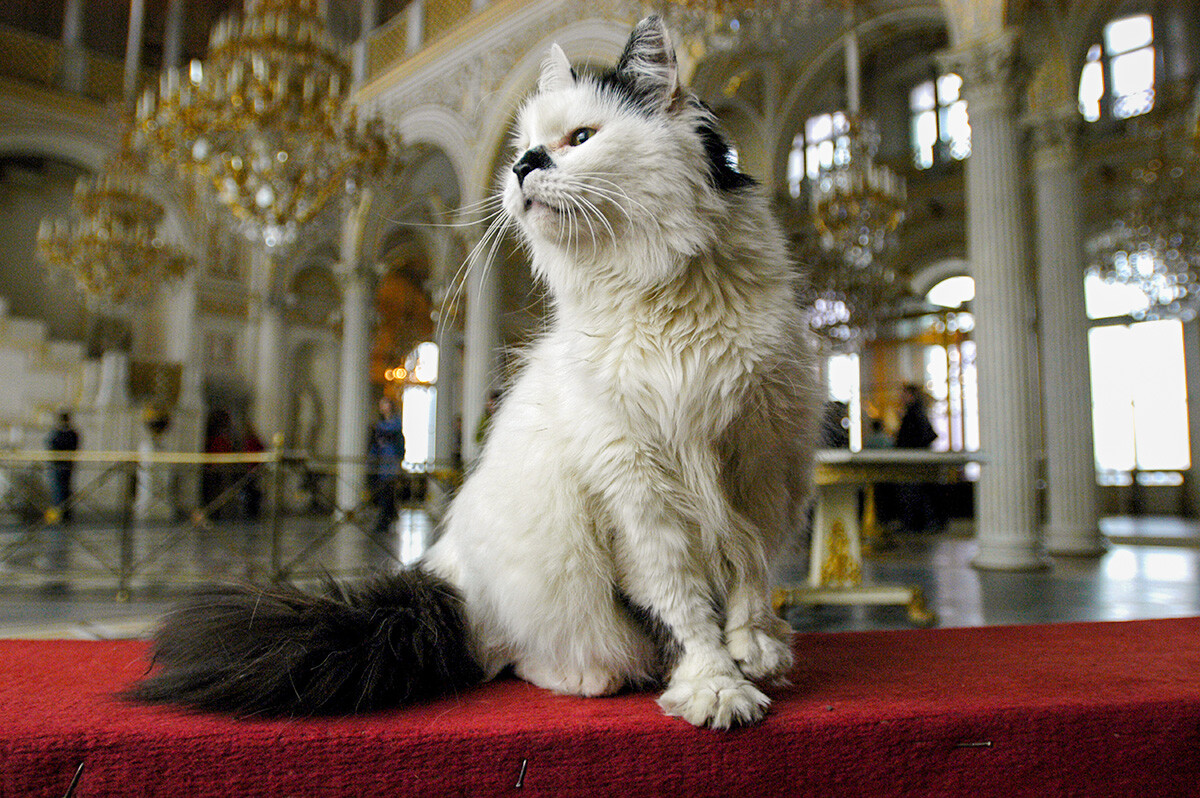 The cats have been in official service here since the times of Empress Elizabeth. In 1745, she decreed that St. Petersburg was to “receive 37 large and fearsome cats” from Kazan. Cats would guard basements during the war with Napoleon and would continue to do so throughout the Russian Revolution, later on. At one point, rats were being targeted using chemicals, but only the natural-born rat killers really got the job done.

During the siege of Leningrad, cats had completely disappeared from the city and rats moved into old buildings. It wasn’t just Hermitage artworks that were in danger - but people’s lives, as well: rats are notorious disease carriers. 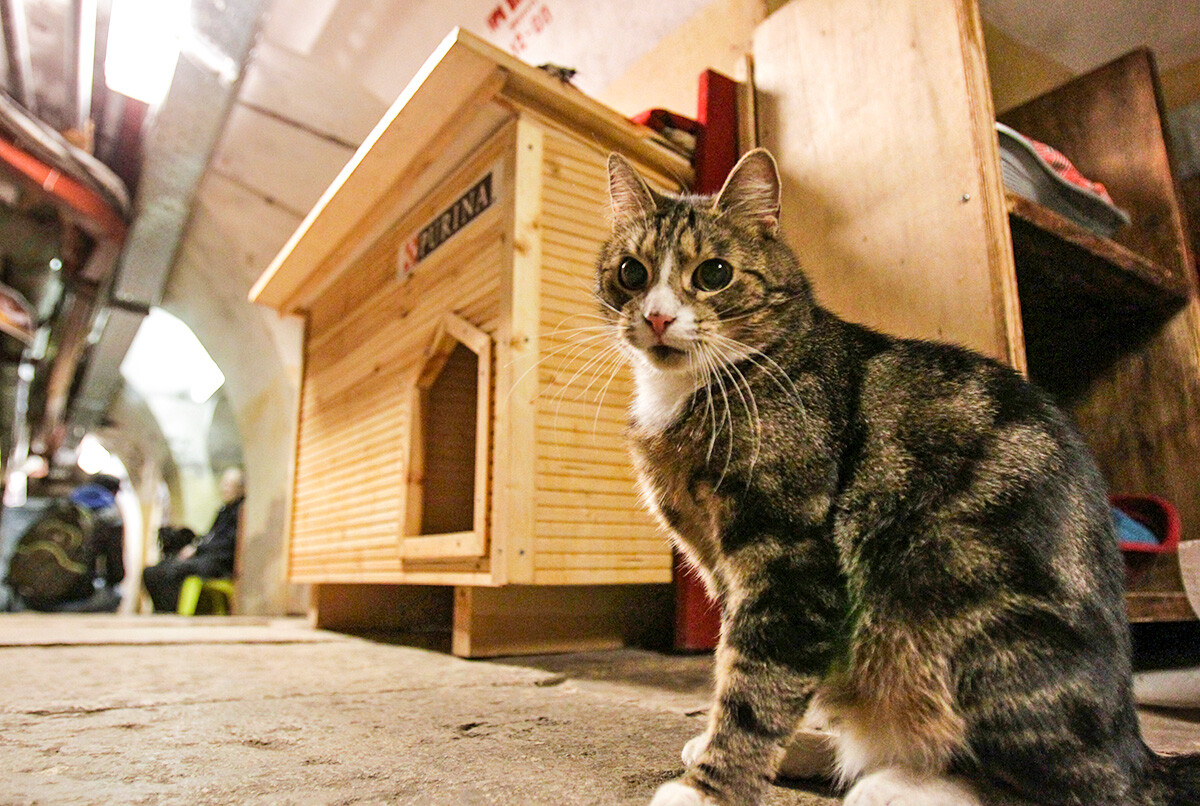 At the Hermitage basements.

Authorities appealed to the populations of regions unaffected by the war to assist Leningrad in replenishing its cat numbers. The largest animal collection centers were in Yaroslavl and Tyumen. Five thousand Siberian cats arrived in Leningrad in 1943. There’s actually a monument in downtown Tyumen dedicated to this event. Perhaps, the descendants of those fighting Siberians serve in the Hermitage to this day. The museum staff say they actually haven’t seen a single rat - ever. There’s a good chance they’re simply scared off by the very scent of the cats.

It’s difficult to estimate how many cats there are today exactly - after all, they don’t just stay in one place and are always “patrolling” the basements (which stretch on for 20 kilometers) or holding conferences in the courtyard, to which only technical staff have access. 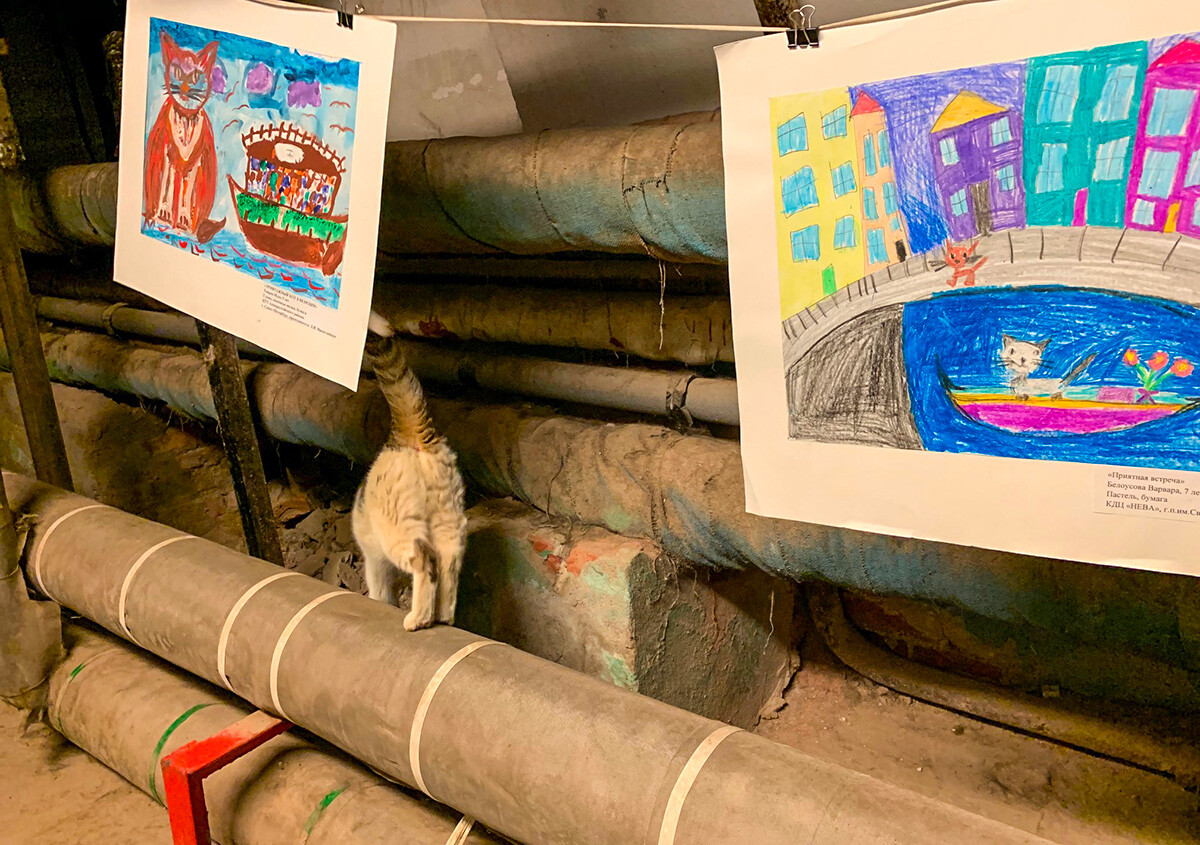 Besides the basements' tour, there's also a painting contest. Best artworks are on display here.

Several years ago, museum director Mikhail Piotrovsky talked about limiting the number of felines to 50 and finding the surplus cats a new home. Still, museum staff claim that the numbers vary, as some cats only come for a lunch break (there are bowls with dry cat food on every corner), then go about their cat business. “If we get strays, we don’t shoo them out!”

They can be recognized by their face 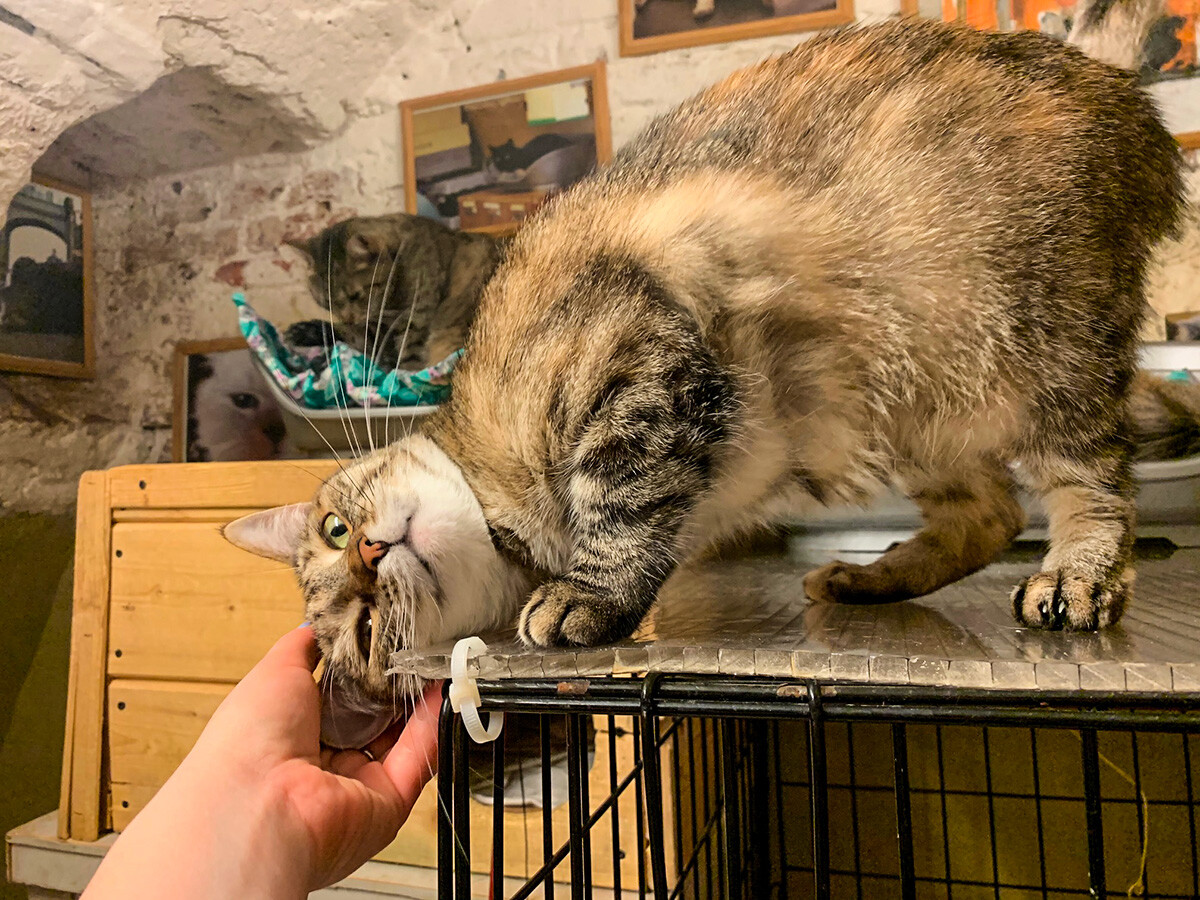 Cat's House - a care center under the Winter Palace.

“We know all the regulars by face,” the staff say. “Some we even know by name.” The large black-and-white one - Mavrik - quickly cuts short his staircase business meeting with the spotted Sharlotka ["Apple Pie"] and snow-white Makar as soon as he hears his name. “What a good domestic cat you are! Right, Mavrik?” a female staffer says, petting the animal. 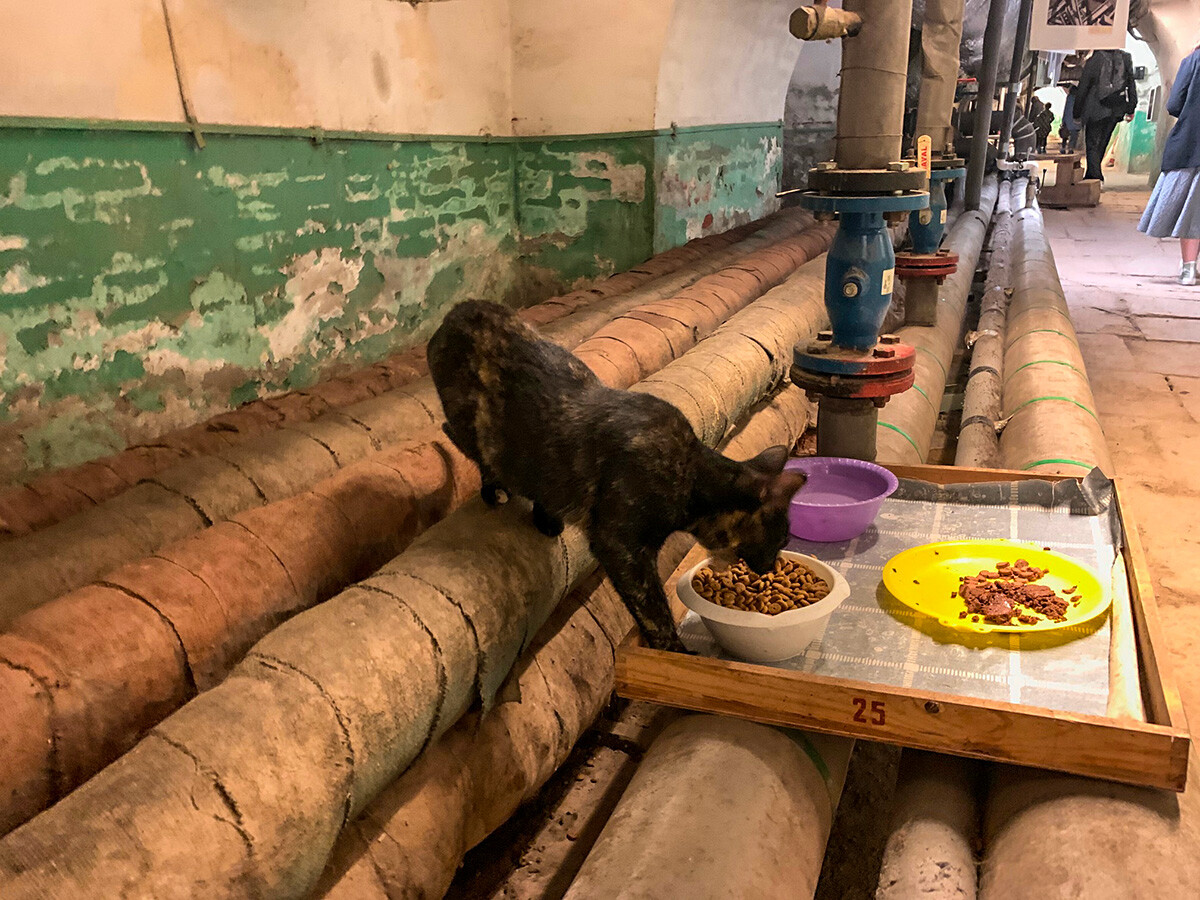 The basements exist across the entire perimeter of the Winter Palace. The majority are ‘active work zones’, where cats freely roam unsurveiled, while a small part is taken up by a special cat care center, which nurses sick cats back to health. “Here we have Geneva, who’s been prescribed special food and, in order to prevent her from taking food from others, we placed her here.” 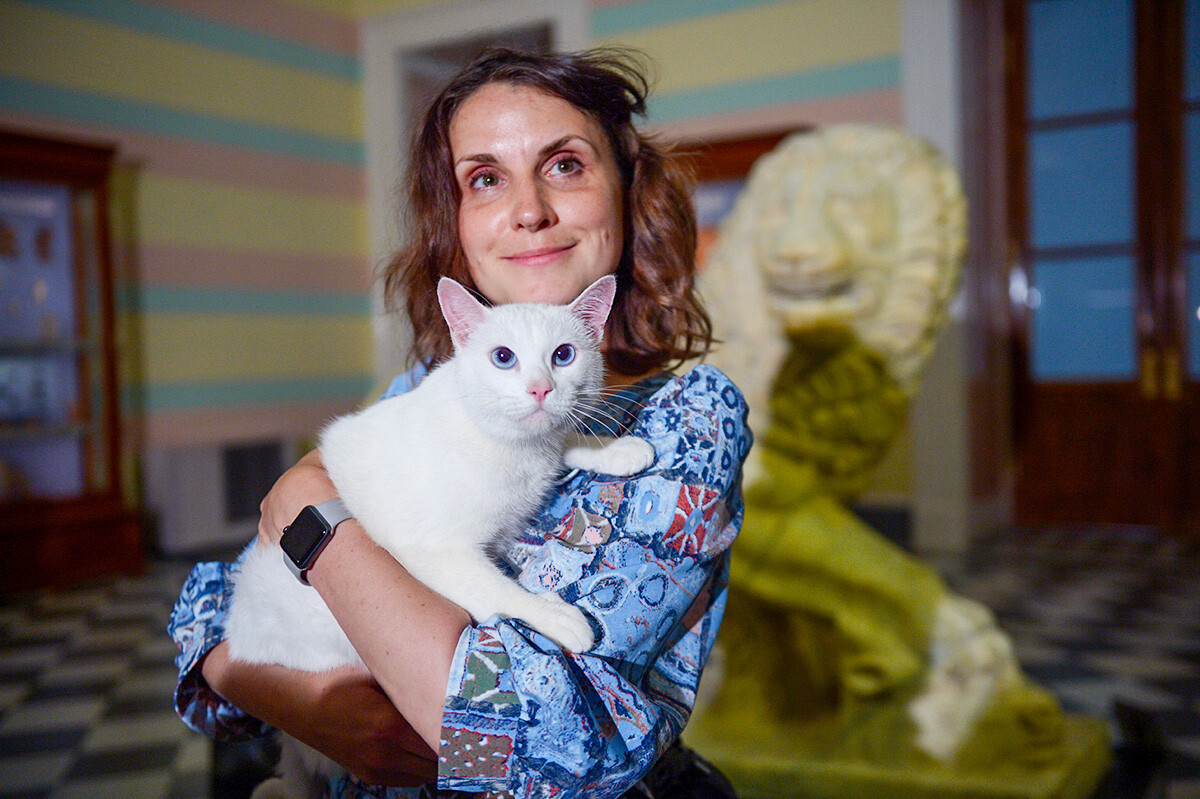 Before ending up in the basement, the calico Geneva lived with a similarly colored Varya at a Hermitage staffer’s home. However, the owner died and her relatives weren’t looking to adopt. Normally, the staff try to find a new home for such cats as soon as possible, as they are too used to people by then. 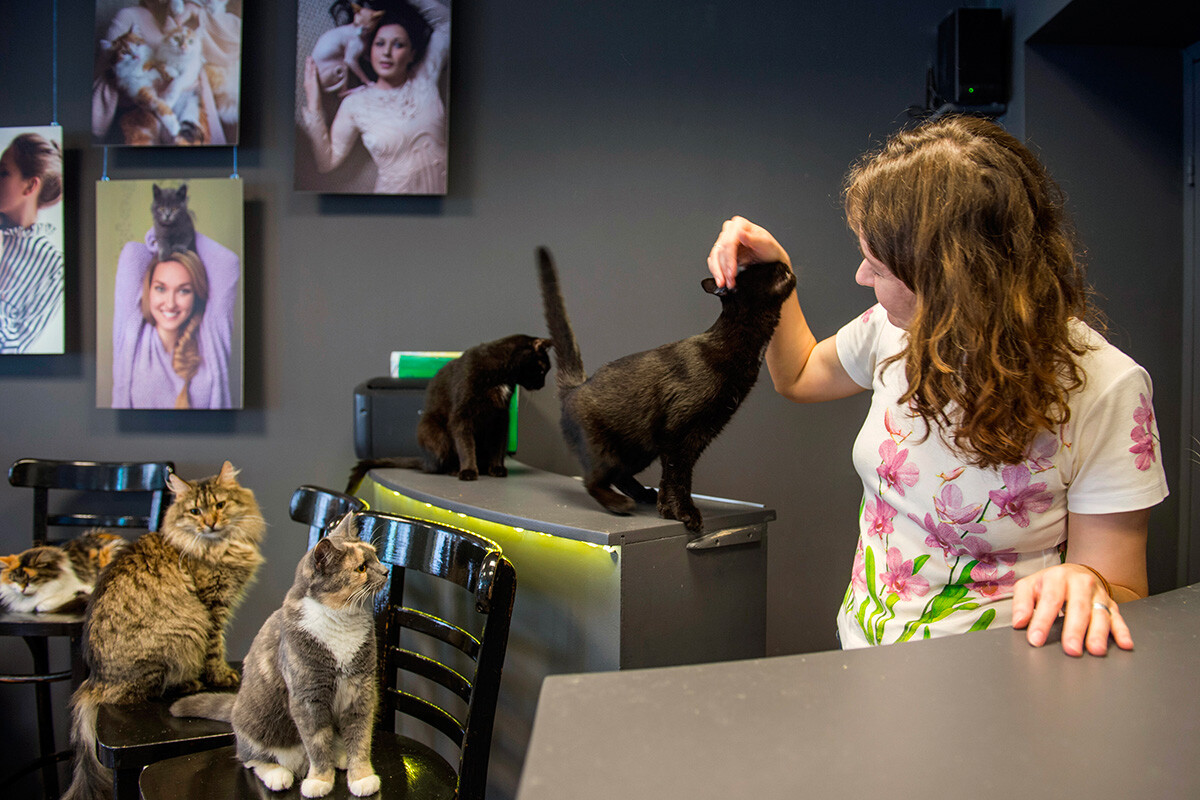 At the Cat Republic cafe.

Before a cat is given up for adoption, they are vaccinated. And if a kitten is older than seven months, they’re sterilized. Some cats that don’t find a new home end up at St. Petersburg’s ‘Respublika Koshek’ (“Cat Republic”) cat cafe, founded by Hermitage veterinarian Anna Kondratyeva back in 2011. She’s now a happy mom to Achilles.

Cats are a true living symbol of St. Petersburg 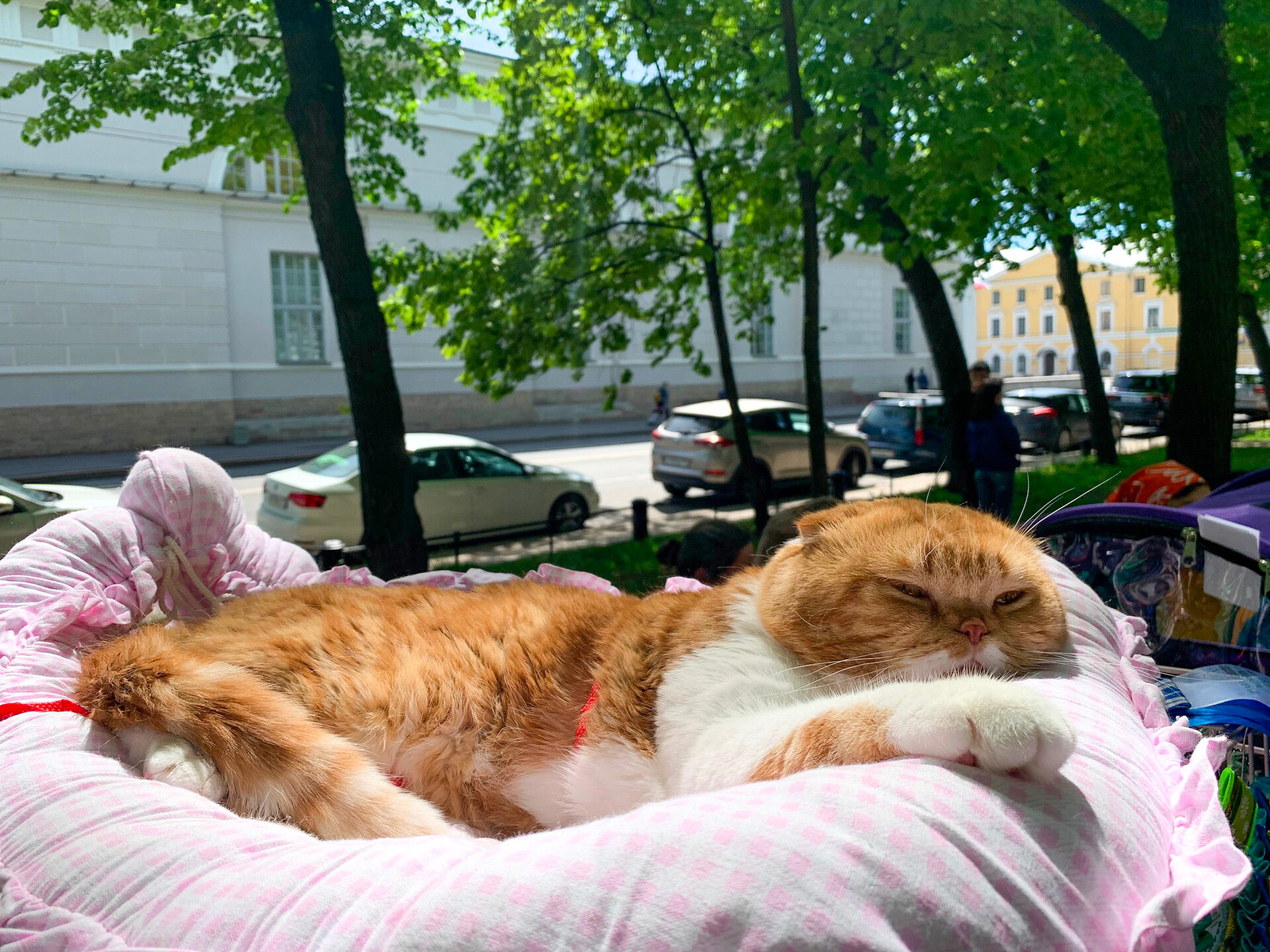 ‘Republika Koshek’ has its own “cat day”, celebrated straight after the one at the Hermitage. For a day, Konnogvardeysky ("mounted guard") Boulevard is renamed ‘Kotogvardeysky’ (as in - “cat guard”) Boulevard and is swarmed by a bunch of cats of different breeds: people and breeders alike bring their cats to the show, while volunteers also show up to help cats in need find a new loving home. 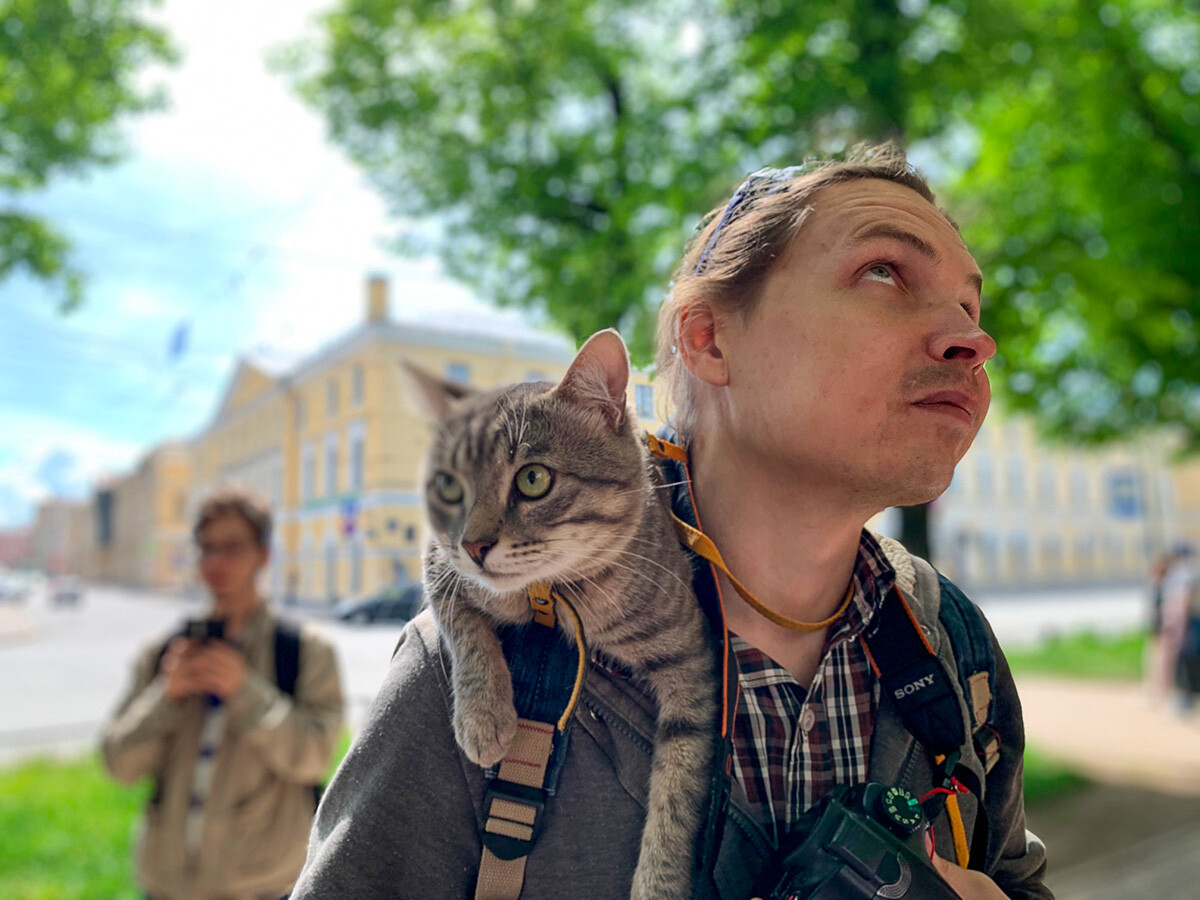 Dymok the cat with his human.

The cat by the name of Dymok ["Smoky"] looks like a simple gray stray. He, too, once found a new home with artist Anna and her friend and now calmly strolls around with a leash and even goes on vacations with his new owners. “He loves traveling, likes new experiences. Just like people - some like to mingle, while others like to sit at home and watch TV,” they say. 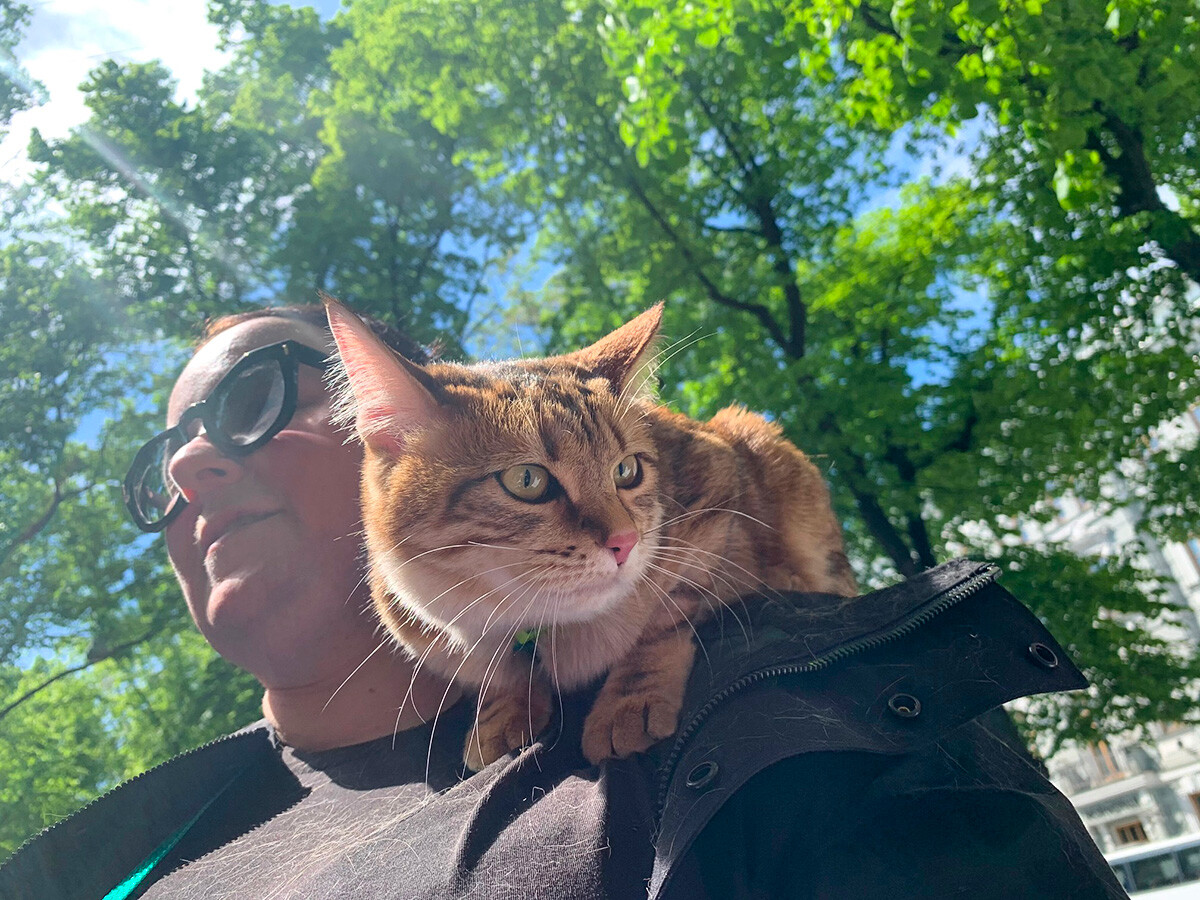 There’s also Lucky - a Kuril Bobtail, surveilling the atmosphere from his owner’s shoulder. While over on the grass, the Bengal Simba is looking for the most delicious grass to chew on. He looks pretty fearsome at first glance, but, in truth, is always looking around for his human to see whom she’s chatting with and if he gets enough praise.

“Actually, the idea for the event came in 2005 from artist Dmitry Shagin from the ‘Mitki’ art collective,” the cat cafe’s spokesperson Olga Titovich says. “Cats symbolize coziness and kindness and they’re also stripy, just like the Mitki - so, the people show up wearing telnyazhki [sailor shirts] to the event. When ‘Repuslika Koshek’ first opened, we adopted the tradition and began holding a large-scale annual cat celebration of our own. We believe that cats unite athletes, entrepreneurs, creative people - everyone you could think of.” 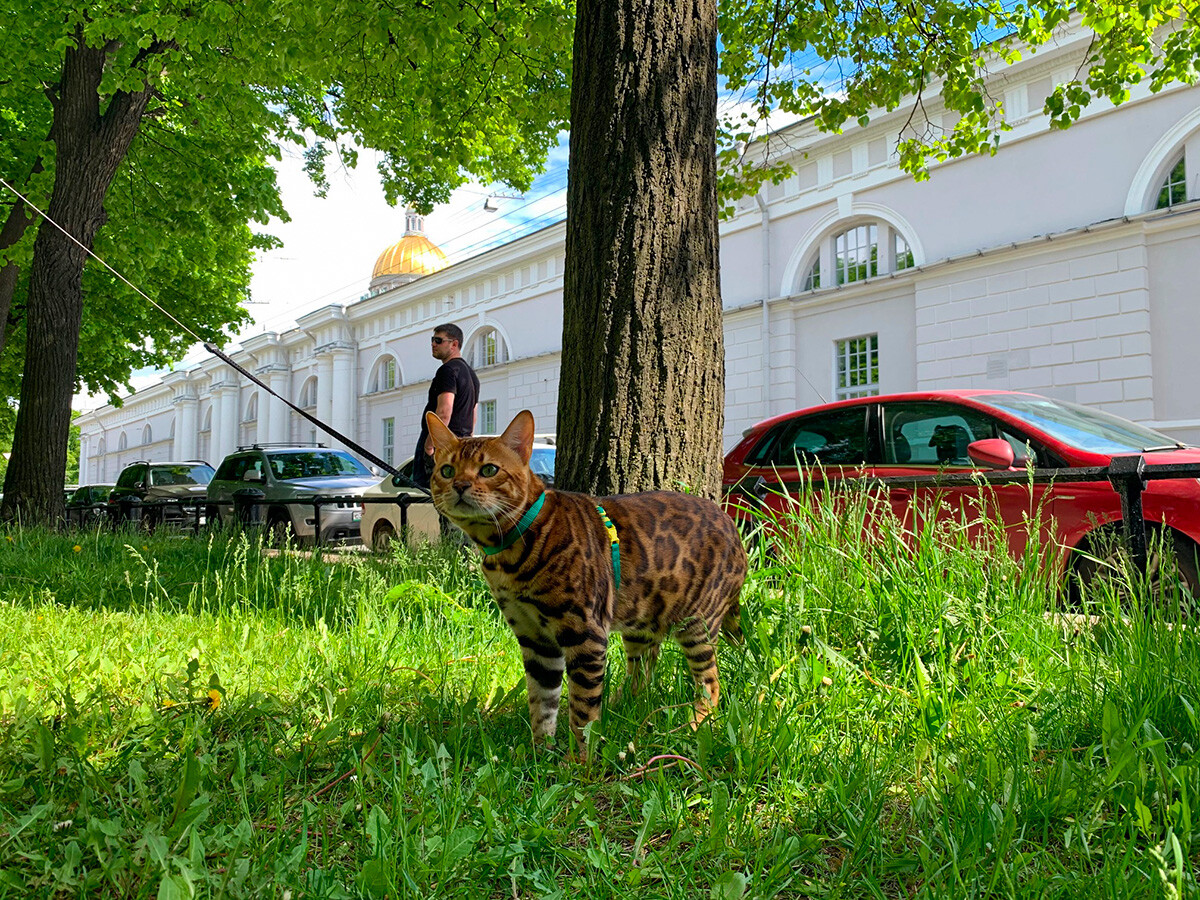 Simba is searching for the tastiest grass.

The cafe doesn’t give its cats up for adoption at the event itself. Instead, it suggests that prospective owners approach the issue of adoption in a very conscious way. “Cats need humans and humans need cats. And we’re sort of a romantic matching agency,” Olga says. “Because, when you rescue a cat, it’s not always clear whom you’re helping more - the cat, or yourself!”