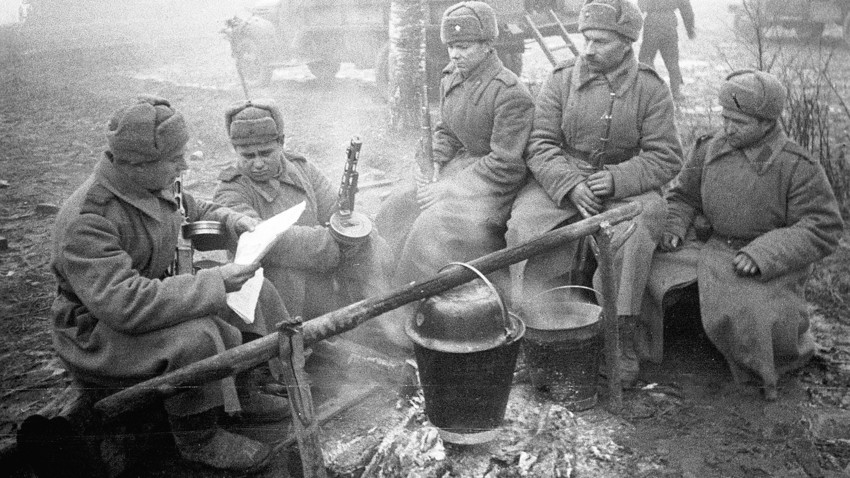 Soviet soldiers cooking food, reading a paper and warming themselves at the fire

Sergei Baranov/Sputnik
Frontline cooks demonstrated incredible creativity to give soldiers a high-calorie and varied diet. Here is a look at the clever culinary tricks they employed.

Meals for soldiers were prepared using field kitchens. Just like the field bakeries that were used for baking bread, these kitchens first appeared at the end of the 19th century. They were placed on a wheeled trailer or on the back of a flatbed lorry, and consisted of several cauldrons (between one and four) and a compartment to store food and kitchen utensils.

Field kitchens used firewood, and in order to conceal the smoke from the enemy the food had to be prepared early in the morning before sunrise and in the evening after dark. It took 40 minutes to boil water in a cauldron, three hours to prepare a two-course lunch, and an hour and a half to prepare dinner. At night the kitchen was very busy: potatoes were peeled and cauldrons were washed. At the start of World War II most cooks were women.

Delivering the food was another challenge, and soldiers had to carry the heavy cauldrons with food from the field kitchen to the frontlines via trenches, risking their lives. The main dish served was kulesh - soup made of millet to which other ingredients, for example lard or vegetables, could be added. Also, field kitchens also served popular Russian soups such as borsch and shchi (cabbage soup), as well as stewed potatoes and buckwheat with boiled or stewed beef or canned food. 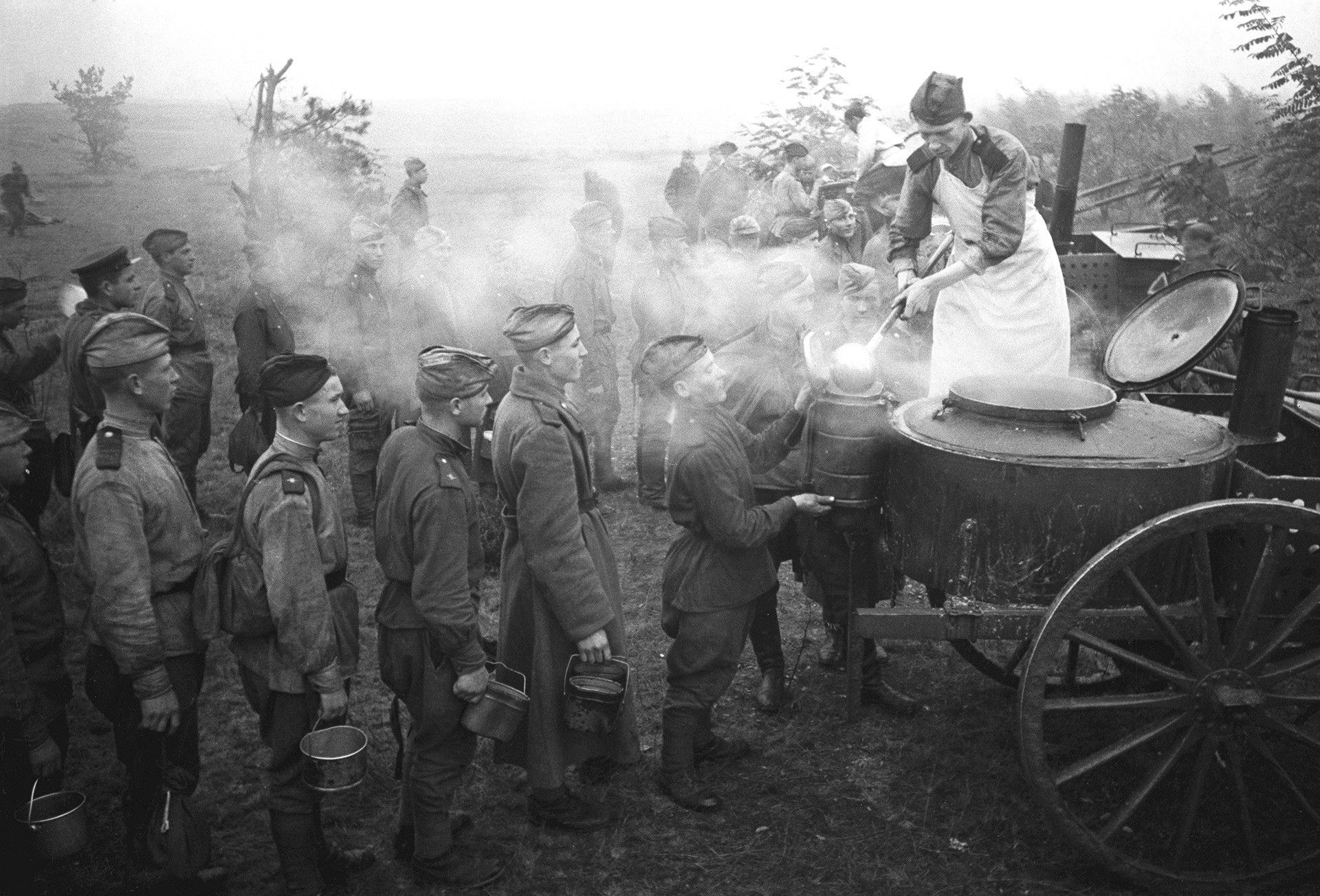 The menu for pilots was more varied and higher in calories. In addition to basic daily rations they received fresh or condensed milk, cottage cheese, sour cream, eggs, butter and cheese, as well as fruit extract and dried fruit.

Submariners also had special additions to their diet: red wine, sauerkraut, salted cucumbers and raw onions. These foods were supposed to prevent scurvy and compensated for the shortage of oxygen on board. Sailors received rusks. Small vessels could bake bread on shore, and large ships had special stoves. Towards the end of the war the food situation worsened, so rations were cut.

Cooks did what they could to vary the rations, which became increasingly meagre towards the end of the war. For instance, they made carrot tea by grating carrots, and then boiled it with Laetiporus sulphureus tree fungus. The carrot gave the infusion a sweetish taste and the fungus a pleasant dark hue. 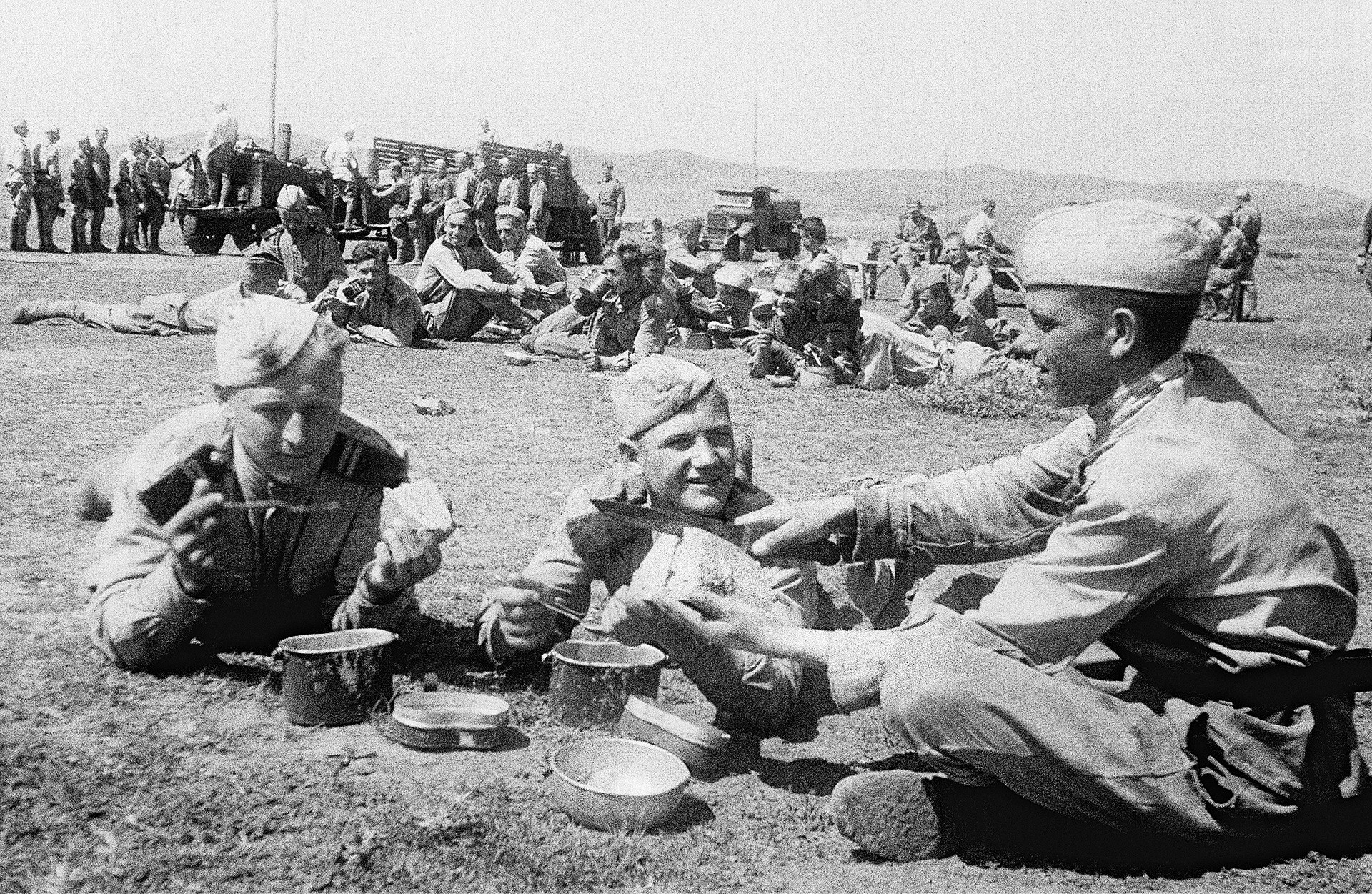 There was also a special recipe for "Rzhevsky" bread, made by boiling potatoes, removing the skins and putting the potatoes in a meat grinder. The resulting mash was spread onto a board sprinkled with bran, and then cooled. More bran was added, along with salt, and the "dough" was quickly kneaded. It was then placed in greased tins and baked in the oven.

Closer to the end of the war in the spring of 1944 the Soviet army received cornmeal from the allies. Some cooks did not know what to do with it and added it to bread, causing it to become crumbly and quickly stale. This naturally angered the men who began to curse the cooks.

Other cooks, however, realized that they could make flatbread out of it. In his memoirs, one war veteran described how a cook sent the men to gather herbs in the steppe (saltbush, sorrel, alfalfa, wild garlic, etc) so that he could make pirozhki-style buns from the herbs and cornmeal. Later he also made the Moldovan national dish, mamaliga, which is a well-cooked porridge made of cornmeal. It’s so thick that it must be cut with a knife.

Read more: What food around the world is regarded as 'Russian'

WWII Under a chef's care