Eat like a 19th-century aristocrat: How to make quail with apples

Russian Kitchen
Vasilisa Malinka
Quail dishes remain as ceremonial and festive as they were centuries ago, but preparing them has become much easier. Follow our recipe to make an aristocratic feast. 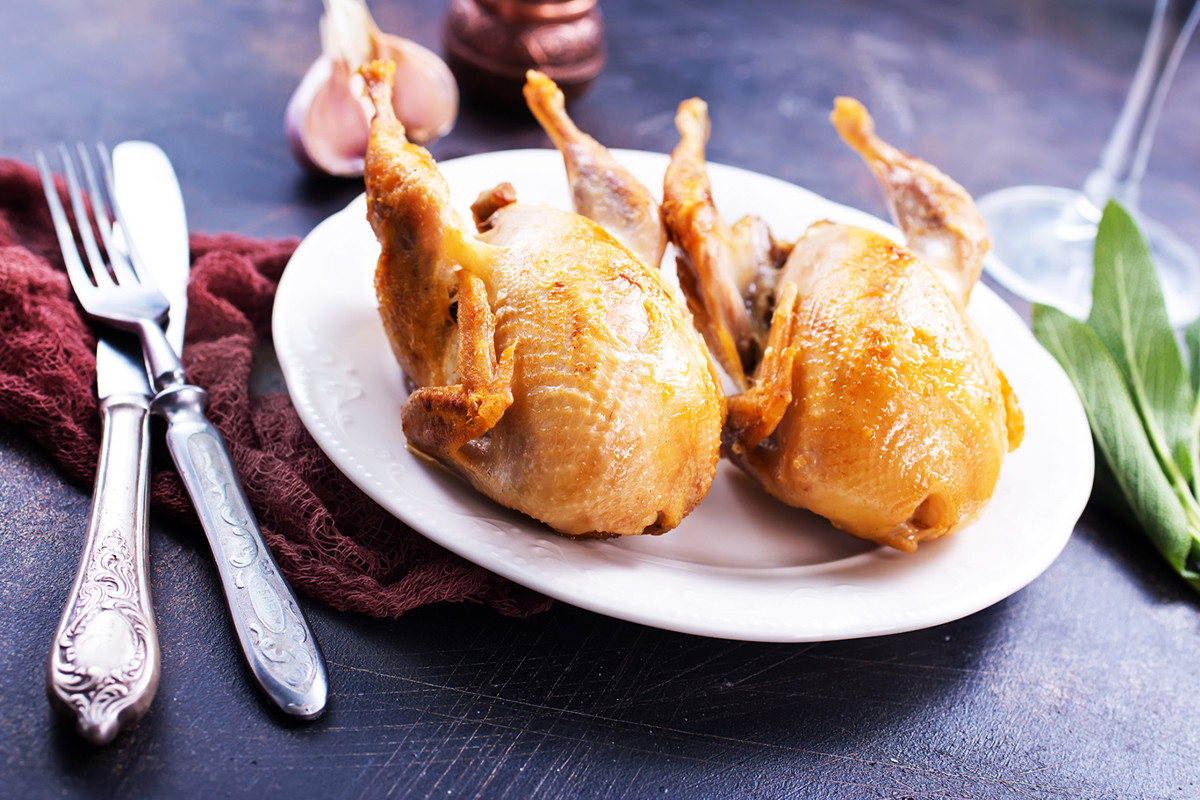 Hunting and eating quail has always been a rich part of Russian tradition and history. Before the Revolution of 1917, quail was hunted in Russia for three purposes: for food, to sell as a pet songbird and for quail fighting (yep, that was a real thing).

At the end of the 19th century, before refrigeration to preserve food became widespread in Russia, quail was eaten only on occasion and in the summer. The birds were bought alive in cages, fattened up and then sold in the markets of St. Petersburg, fetching a price of 35 kopecks per bird or sometimes even 1 ruble for a couple of large birds. This was about the same price as black grouse. Considering that at that time fattened domestic ducks were sold from 60 kopecks up to 1 ruble each, it is fair to say that quail was very expensive. The high cost was the result of significant transportation costs and the general inconvenience capturing and storing the birds prior to sale, which had to do with the small size of quail and the fact that they breed in prairie regions that are sparsely populated. As a result, quail was considered to a delicacy fit primarily for the tables of noblemen.

Back then, the summer hunt for quail began after harvesting wheat. According to laws that were in effect before 1917, hunting quail was forbidden from March 1 through mid-July. There was an exception for hunting male quail with a net, which was permitted from May 1. The hunt would mainly take place in the early morning or evening, but only when there was no dew. Desirable quail could be heard in the calm weather from up to 2 km away.

There were many diverse ways of capturing quail. Besides hunting them with a rifle and with hawks, a practice common to all small game, quails were also captured using special nets.

The famous Russian food writer William Pohlebkin says that dishes from quail have always been festive and ceremonial remain so to this day. Game selection is, of course, very important. He writes that it is better to choose a young and properly shot bird (meaning only the wings or legs were shot, and not the breast) and proclaims that quail is a banquet game that is regarded as being tastier and having a gentler flavor than other birds. Besides game selection, proper cooking is clearly the most important step. According to Pohlebkin, in Russian cuisine small game such as quail is only supposed to be fried, typically in a saucepan on the stove over gentle heat, basted with its own juices and fat. In Russian cuisine, the heads and insides of the game are not used for stuffing. Instead, it is more common to use chicken liver mixed with seasonal fruits, mushrooms or berries to give the stuffing a tenderer flavor.

Nowadays you don’t need to know how to capture a quail in the wild since you can just buy one in the store. But you’ll still feel like an aristocrat when you eat our take on an ancient quail recipe. 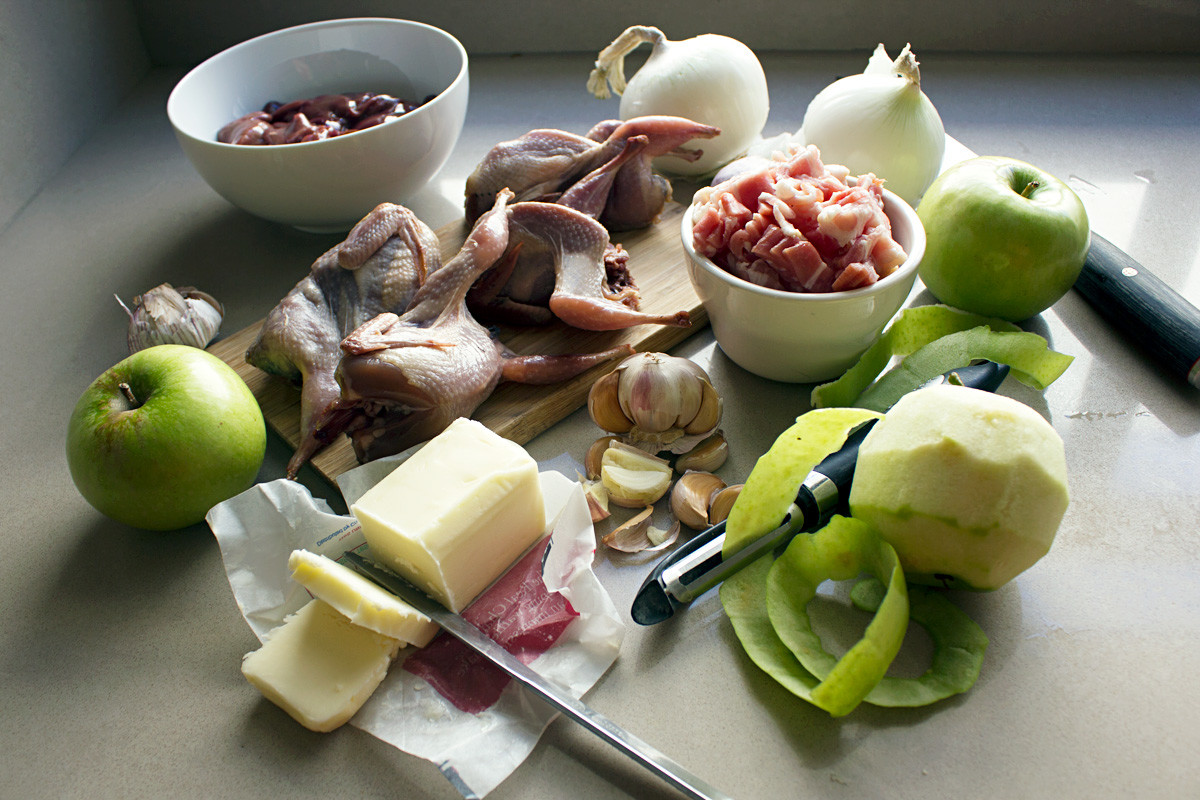 1. Get your quails and chicken livers ready by removing the excess fat/tissue and pat them dry.

2. Start by heating up the pan and, once it’s hot, throw in some smashed garlic and your chicken livers. Pan-fry them until golden brown on both sides (they should stay a little pink on the inside) and then remove from heat, along with the garlic. Once it has cooled, cut the liver into small cubes and chop up the garlic.

3. Dice the bacon into small cubes or slices and cook it in a pan on medium heat. The fat should render, and the bacon should turn light brown and crispy. Take the bacon out and put it on a paper towel so the excess fat gets absorbed. Afterward, cut the bacon into smaller pieces. But don’t throw away any excess from the pan. 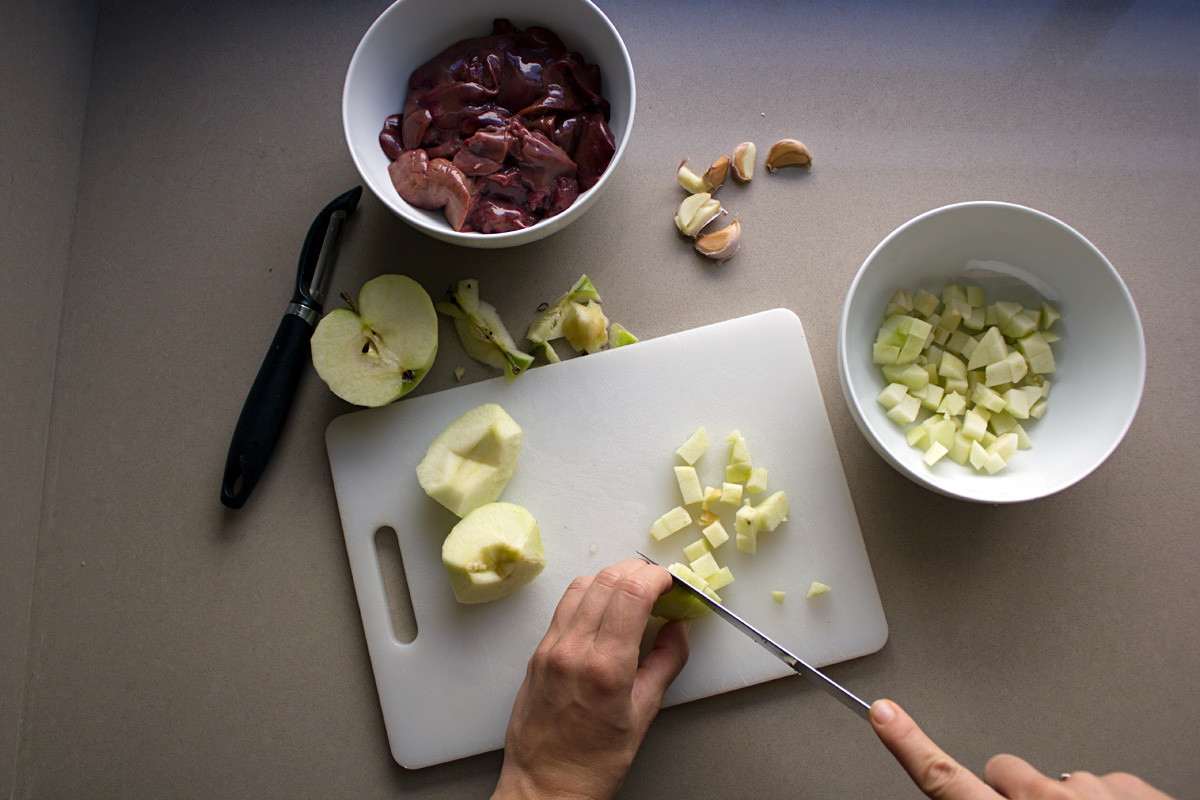 4. Peel and dice the apples into small cubes. Using the bacon fat, pan-fry it with some salt, pepper and a little bit of sugar. When the apples are almost cooked through, add a spoon of butter and cook a little more. 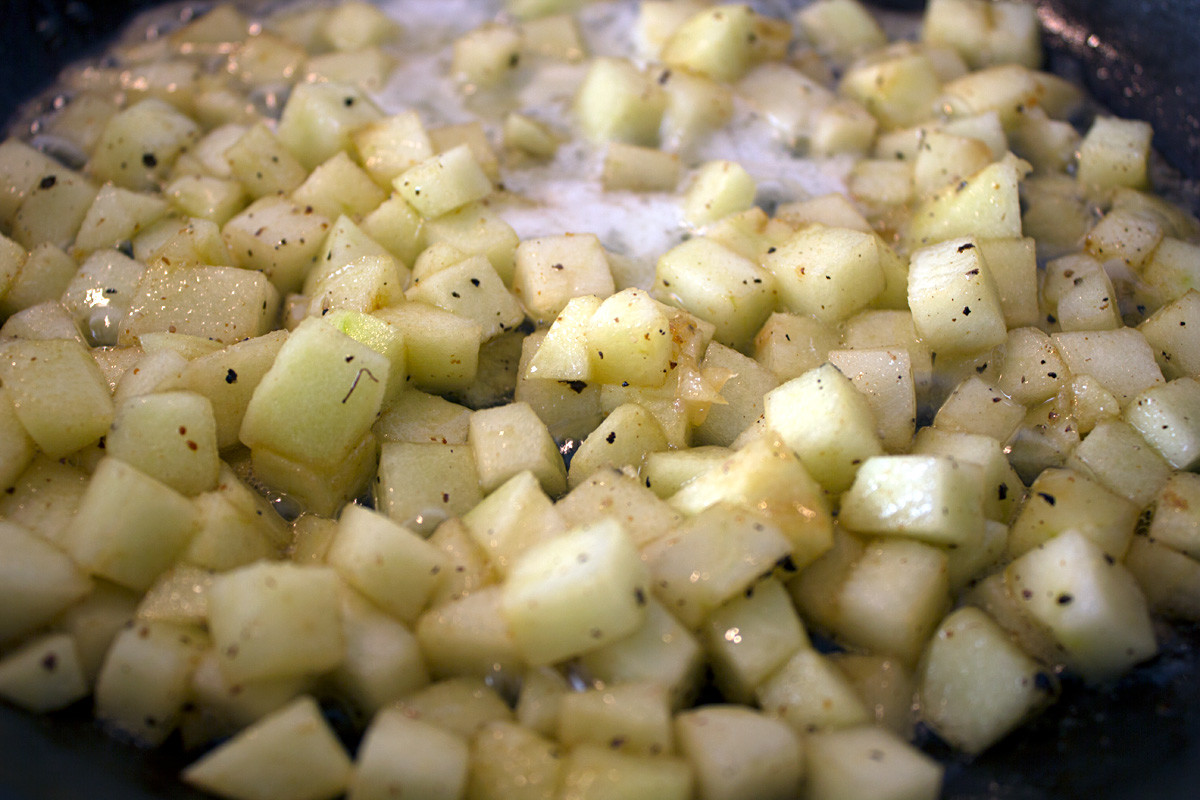 5. In a bowl, mix together cooked apples, bacon, garlic and livers. Season well with salt and pepper and begin stuffing the quails. 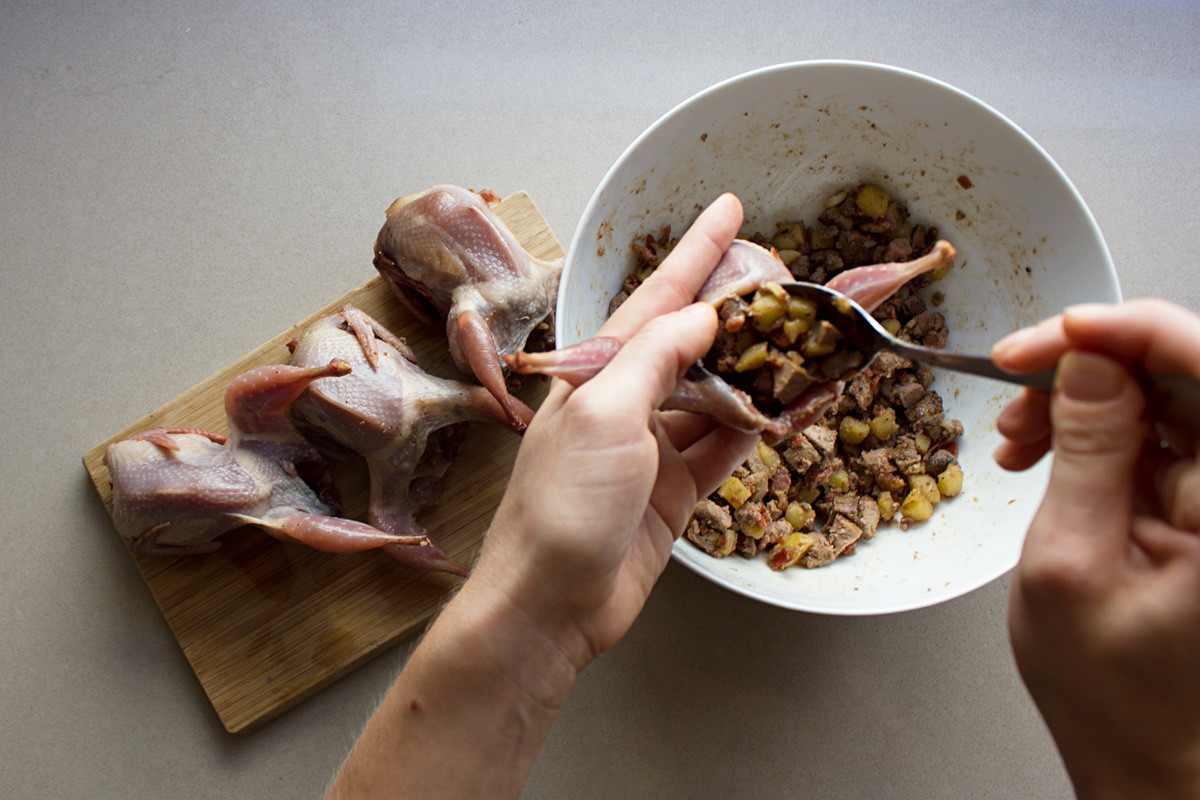 6. Meanwhile, slice your onions and sear them on a pan with some oil, adding a little bit of water from time to time. When the onions don’t feel crunchy anymore and there’s little moisture left, add sugar, salt, pepper and butter. Caramelize the onions until they’re a rich dark brown. 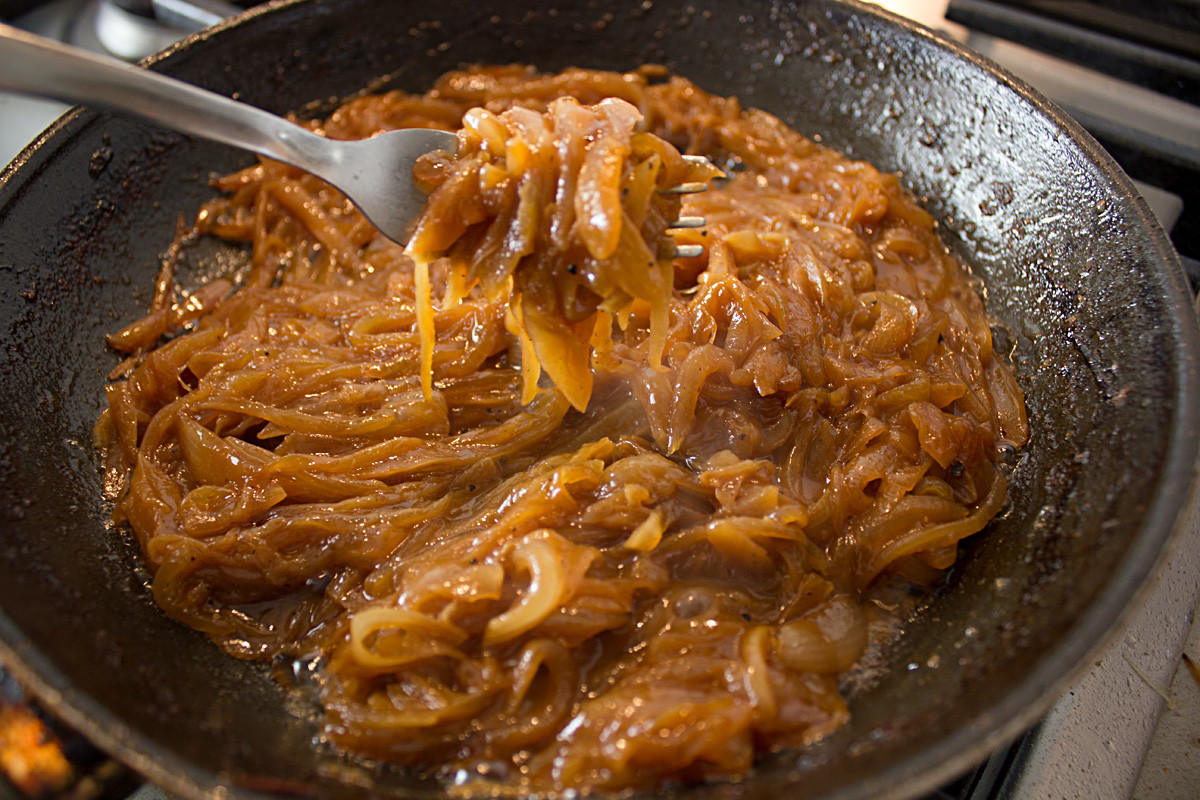 7. Heat up a cast iron pot or pan and fry the quails for about 2 minutes from each side until their skin becomes crispy. 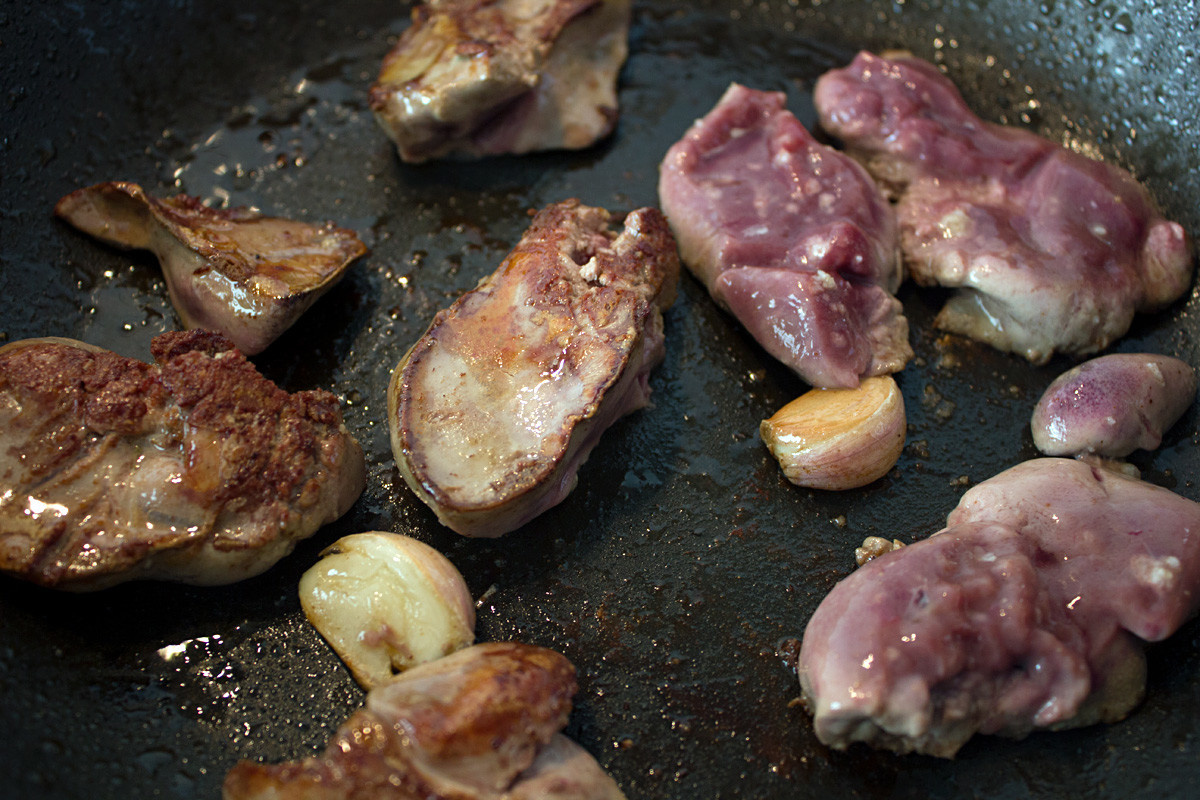 8. Put your quails to the side for now and transfer the onions into the same pot or pan. Add some water and put the quails on top. Cover with a lid or some foil and bake at 220°C for 15 minutes. Then remove the cover and broil for about 2-3 minutes. Take the pot out and let it cool for a little before you dig in. Priyatnogo ! 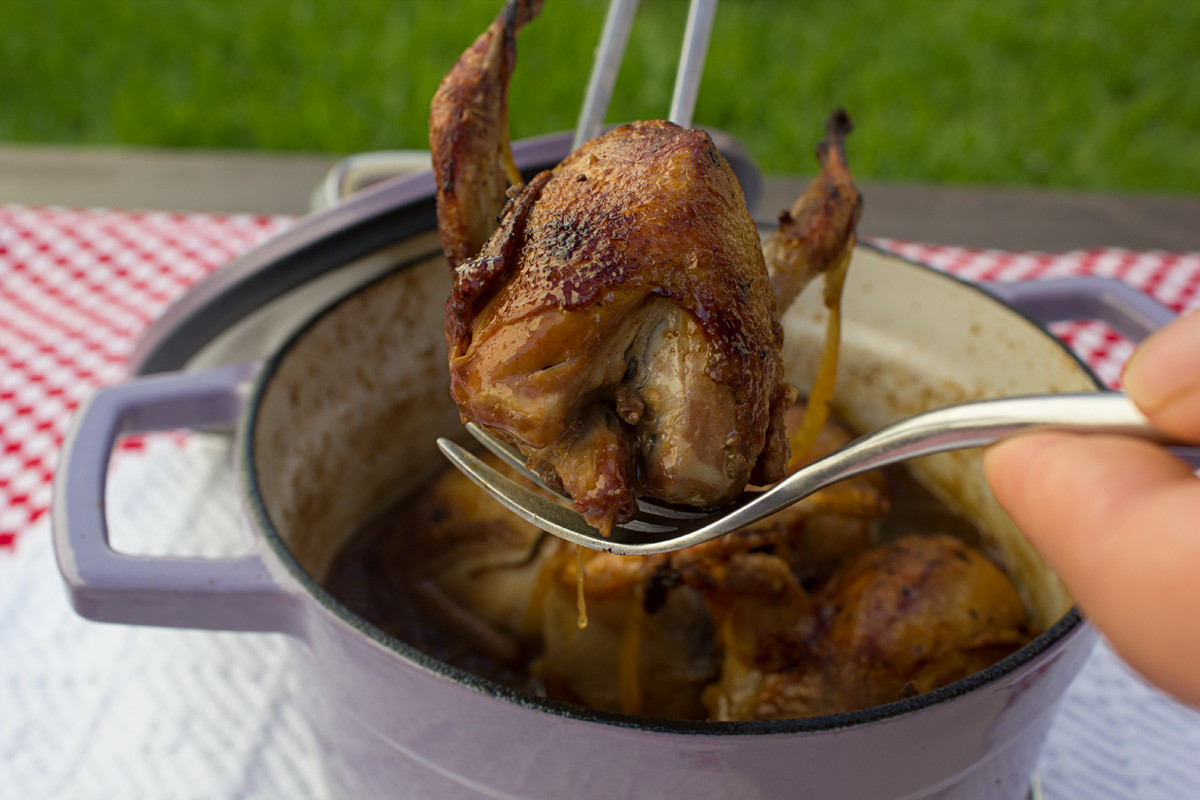