The ultimate guide on how to cook Beef Stroganoff (RECIPE) 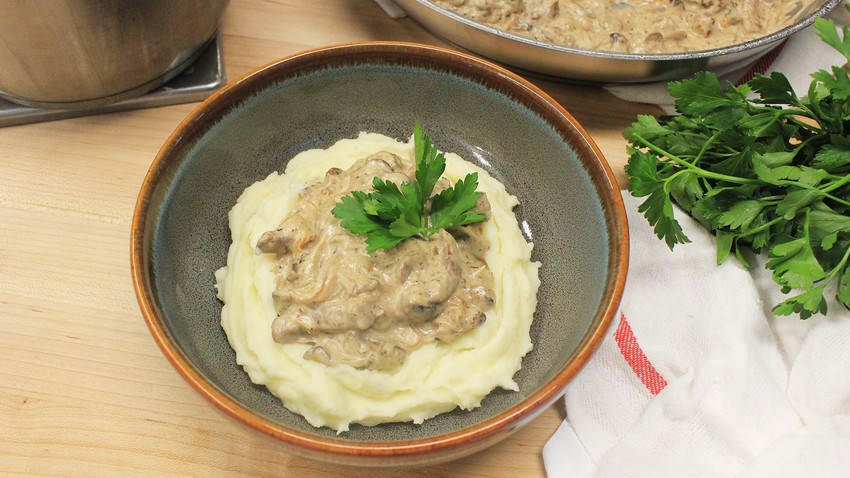 Vasilisa Malinka
The exact original recipe for this dish is not known; therefore, you’ll find different variations. We made things easier, and have compiled the main features and put them in a single guide.

Supposedly, Beef Stroganoff was first made by the French chef working for Count Stroganov, who had an ‘open table’ in his palace in Odessa. At this table any decently dressed person could get some food for free. Beef Stroganoff was often served and that’s why it was named after Count Stroganov. Following World War II it became a favorite national dish, and it’s now perhaps the most recognized dish of Russian cuisine across the world.

In Soviet cuisine chefs used cheap cuts of beef for this recipe. Long braising allowed the cuts to become tender and the acidity of sour cream completed the breakdown of protein. While it is advised to use a more premium cut of meat fillet such as sirloin or ribeye, we do not urge you to buy Wagyu beef, but at least make sure that you remove all the tough veins and connective tissues before cutting your beef. Otherwise, the beef will not tenderize while cooking.

It is extremely important to cut the beef across the fibers. If not done correctly the meat will contract and harden once fried and will become impossible to chew. Cut the beef into narrow strips 5-6 cm long and about 1 cm in thickness.

Now you need to dry your pieces of meat with a paper towel, and cover them with a very thin layer of flour mixed with a little bit of salt and pepper for seasoning. This will help the meat caramelize and get the golden-brown crust that seals the juice inside for the best result. Be sure to shake off the excess flour with the help of a sieve; otherwise, you’ll be able to taste the flour in the sauce.

First of all, heat your pan in advance with some oil on medium-high heat. The pan needs to be hot, but not piping hot. Then add your meat to the pan, but don’t oversaturate it. It is very important to have only one layer of meat. That way it will get the golden crust without releasing any juice. Since the pieces are thin, they should take not more than 2-3 minutes to get the crust all over. Then take the meat and place it on a plate until your sauce is ready.

Some recipes advise to add pearl onion, capers or even olives. We definitely suggest you stick with the classics and add mushrooms. You can use any mushrooms you like, but if you can get a hold of some porcinis, they will elevate your Stroganoff to a whole new level.

Keep your mushroom as dry as possible. Do not wash them, but better clean them with your knife, carefully scraping off the dirt or even taking the skin off where it’s possible. Then treat them like the meat: keep the pan hot and rapidly caramelize them until that golden crust appears.

The sauce is what defines Beef Stroganoff as a Russian recipe. It is directly incorporated into the dish, which is contrary to the classic French way of putting the sauce on the side. Usually, it’s based on sour cream, but all those caramelized juices from the meat and vegetables should not be wasted. They are the base of the sauce, so do not change the pan after frying your meat. When you add the meat and the mushrooms to the sauce and let them braise for just a little, everything will come together. The sauce will make the meat even more tender, and the beef and mushrooms in return will make the sauce richer.

Beef Stroganoff is usually served with a garnish, but one that shouldn’t overpower the meat. Traditionally, mashed potatoes work best. 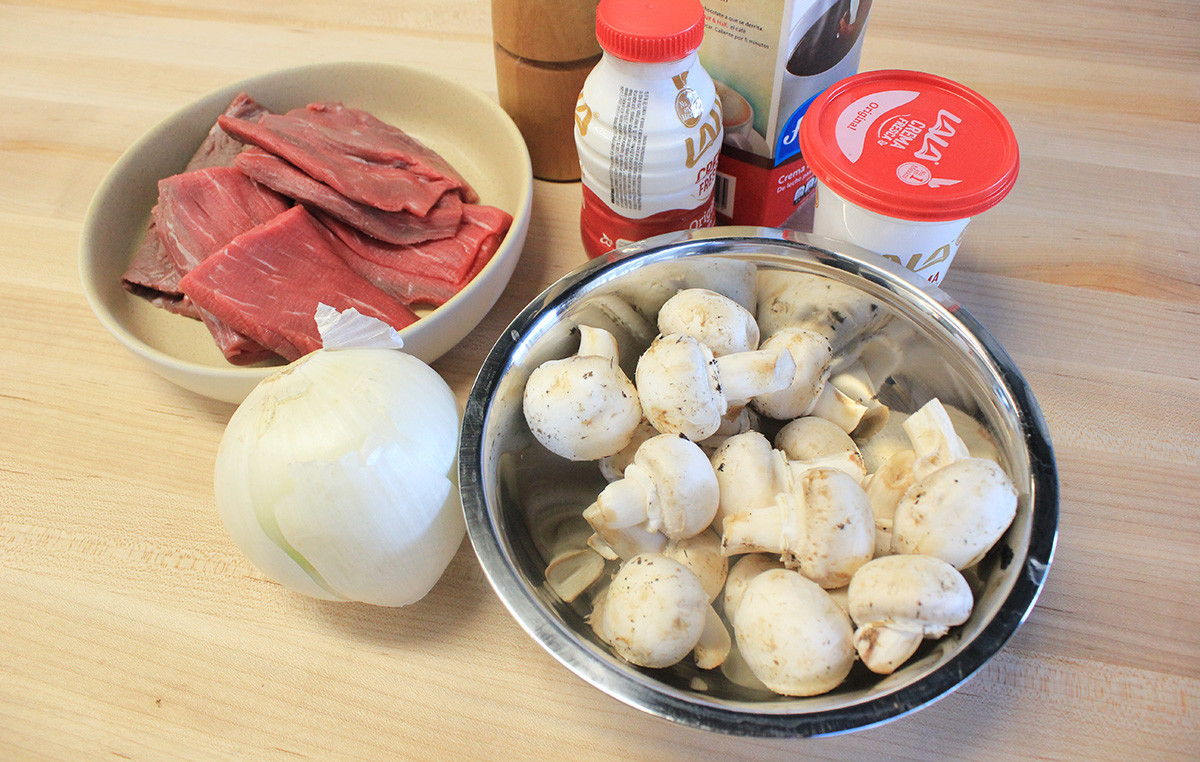 1. Prepare your beef by removing all the tough tissues, and cut into strips about 1cm thick and 5-6 cm long. 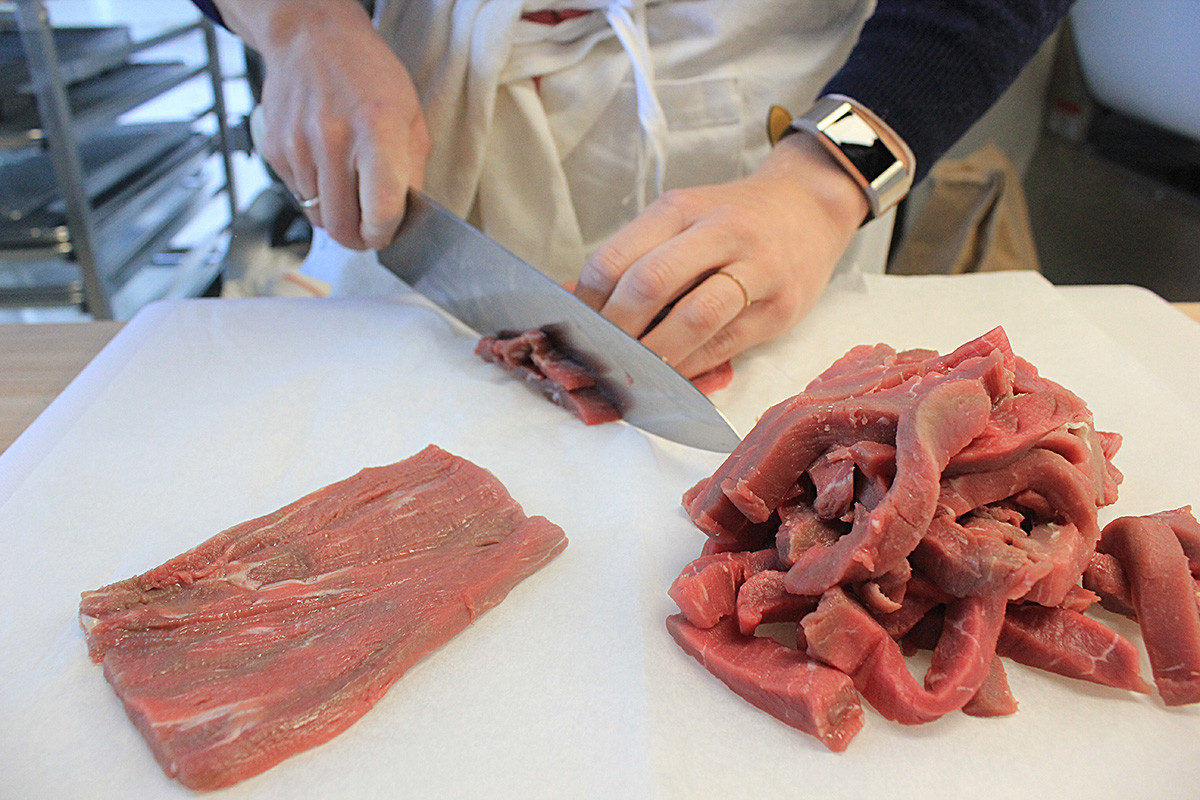 2. Clean your mushrooms with a paring knife and slice them thinly. 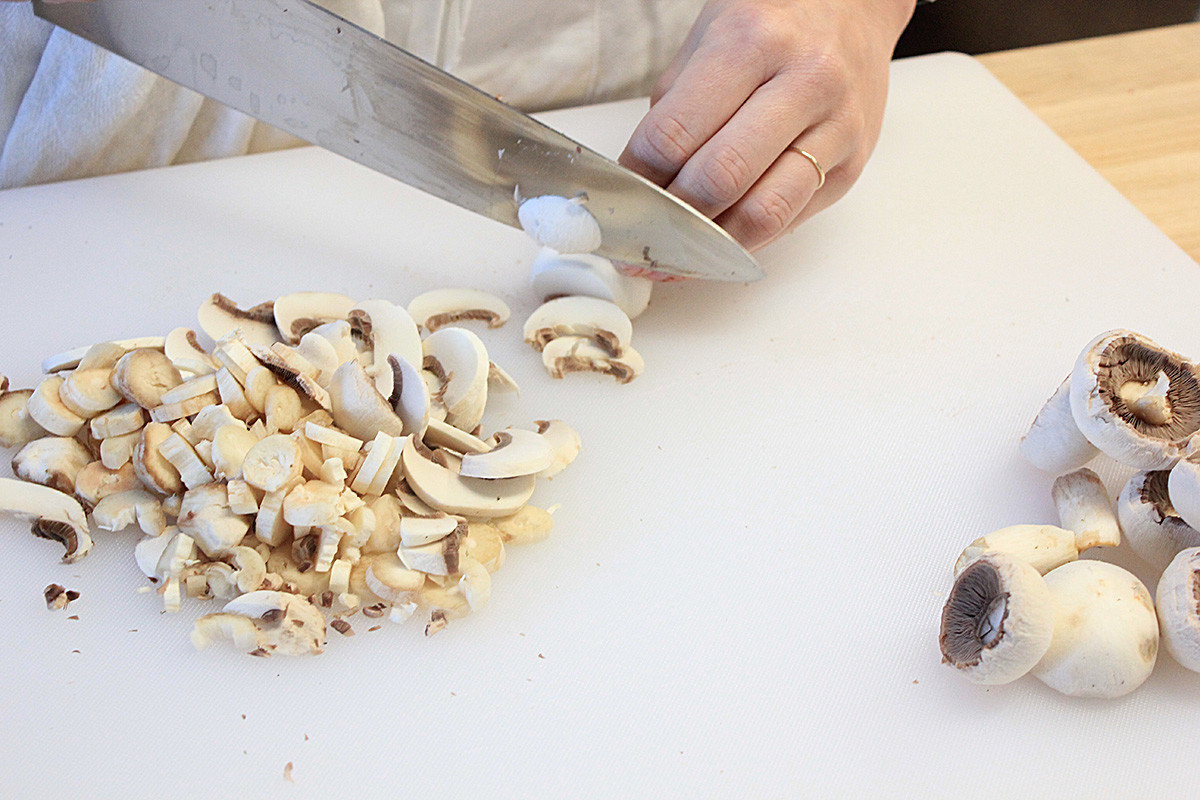 3. Slice your onion into thin strips.

4. In a bowl, mix together flour, salt and pepper. Add your meat and cover all the pieces evenly with the flour mixture. Remove the excess flour by placing the meat in the sieve and shaking it a little. 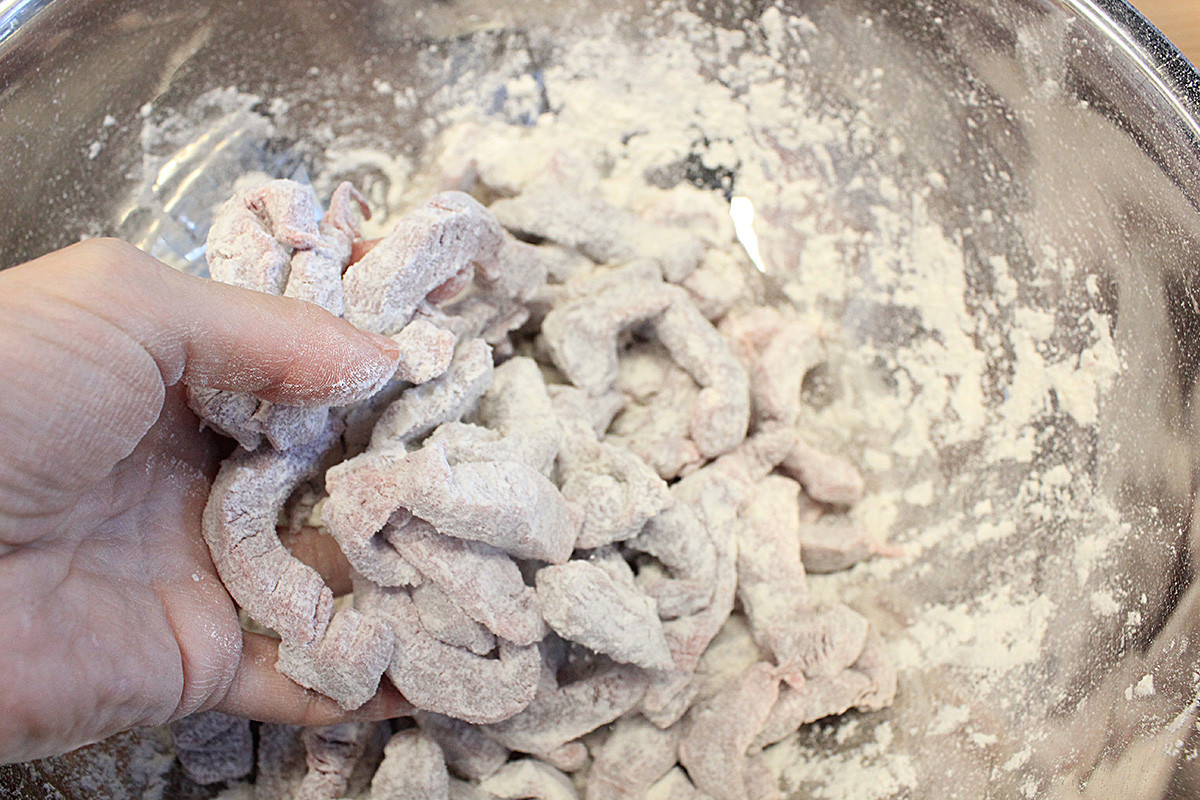 5. Prepare the pan with a bit of oil. Keep it on medium-high heat. Place the meat into the pan in a single layer. Make sure the pan is not saturated. Fry the pieces for about 2-3 minutes until allsides have a golden-brown crust. Place the meat onto a plate and repeat this step if you have more slices left. 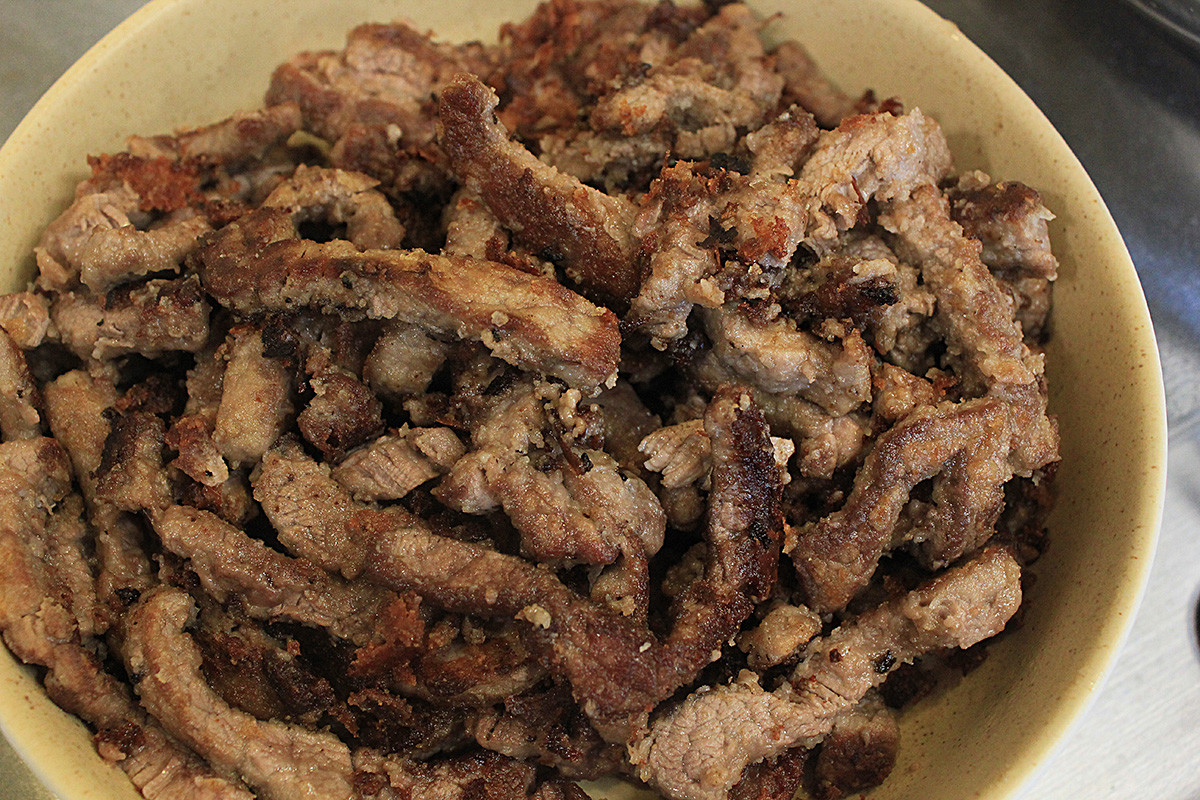 6. Now without washing the pan, add a little more oil to it and keep at medium-high. Add the sliced mushrooms and fry fast until the golden crust forms. Also put into a plate. 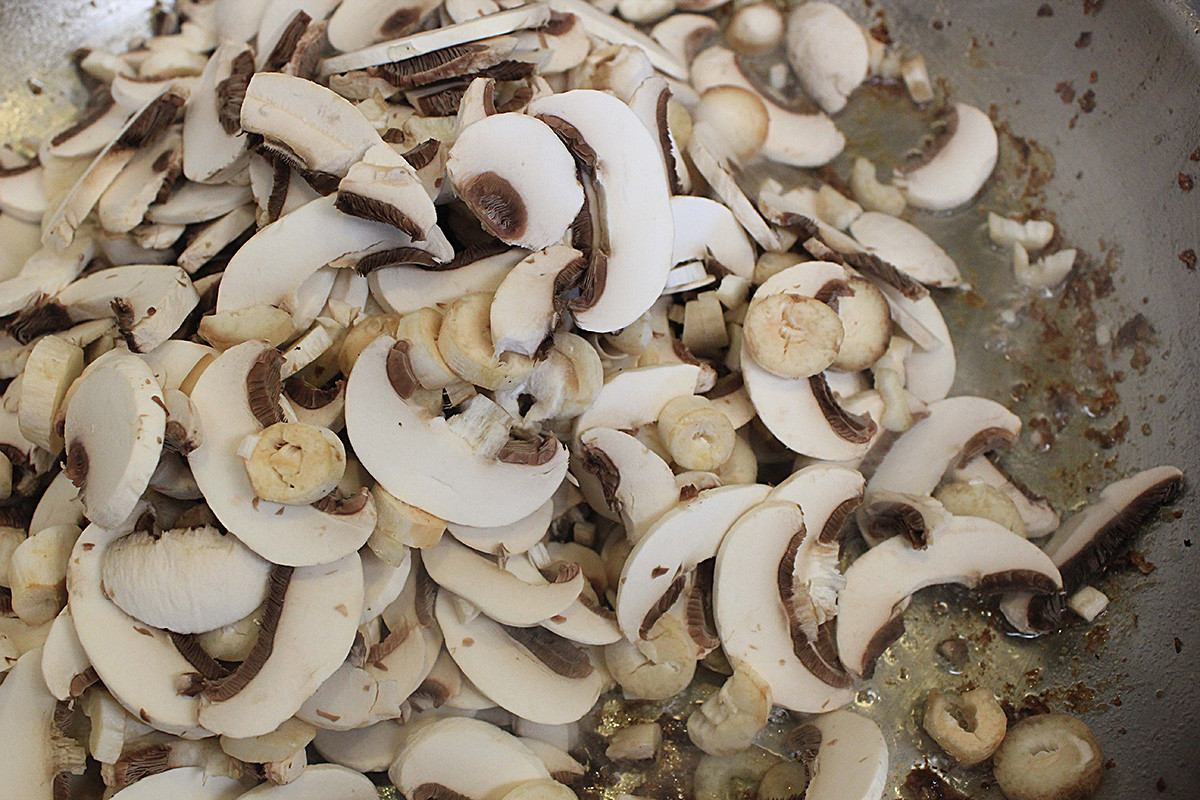 7. In the same pan fry your onions, until soft. Remove to a plate. 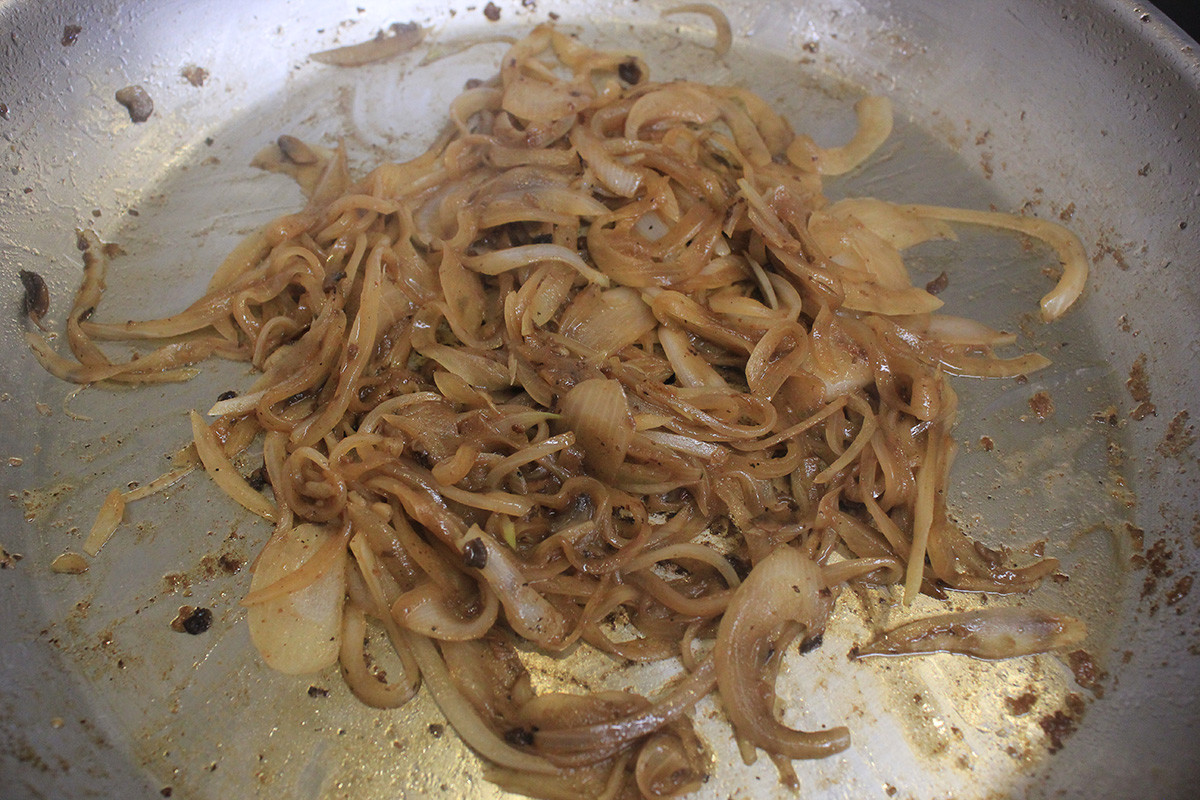 8. Keep the pan on the heat and add water to it. Wait for the water to boil and start evaporating. Scrape all the caramelized bits from the bottom of your pan into the water. Once your water has reduced by half add the heavy cream and sour cream. 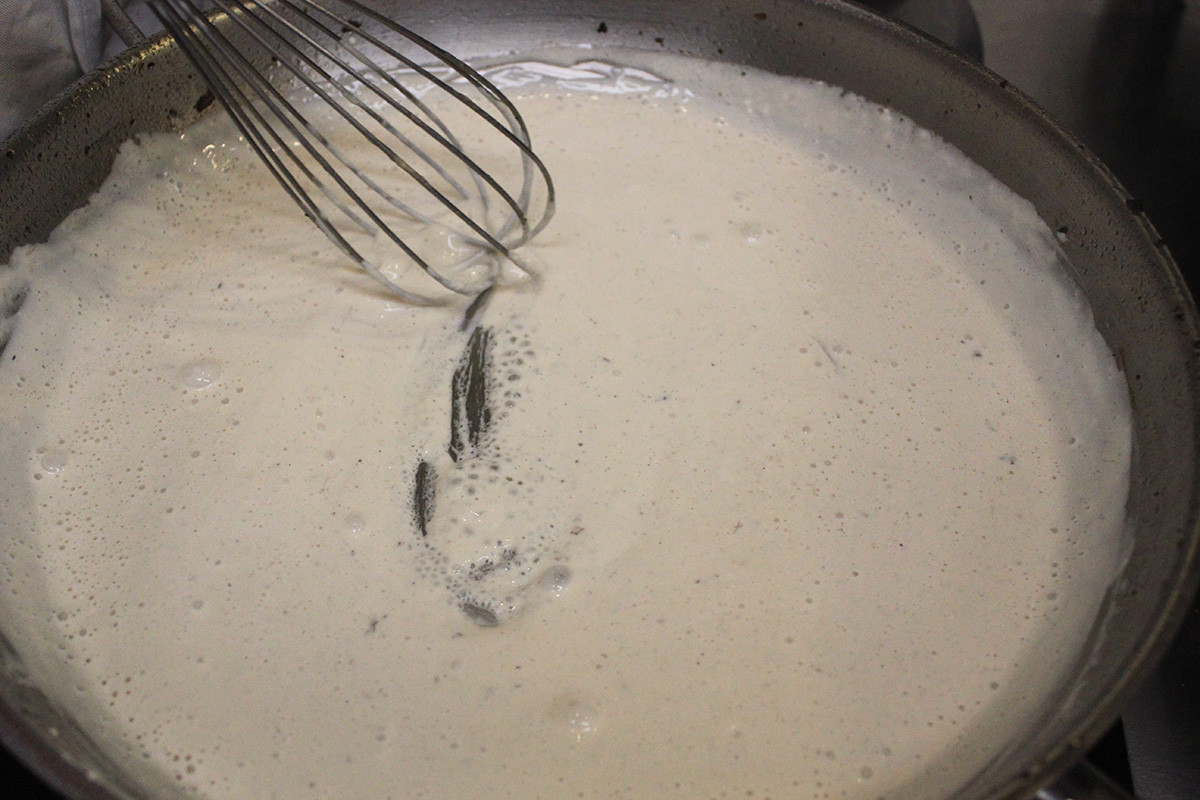 9. Whisk everything together and add salt and pepper. Cook the liquid for a couple of minutes before adding your meat, mushrooms and onions. 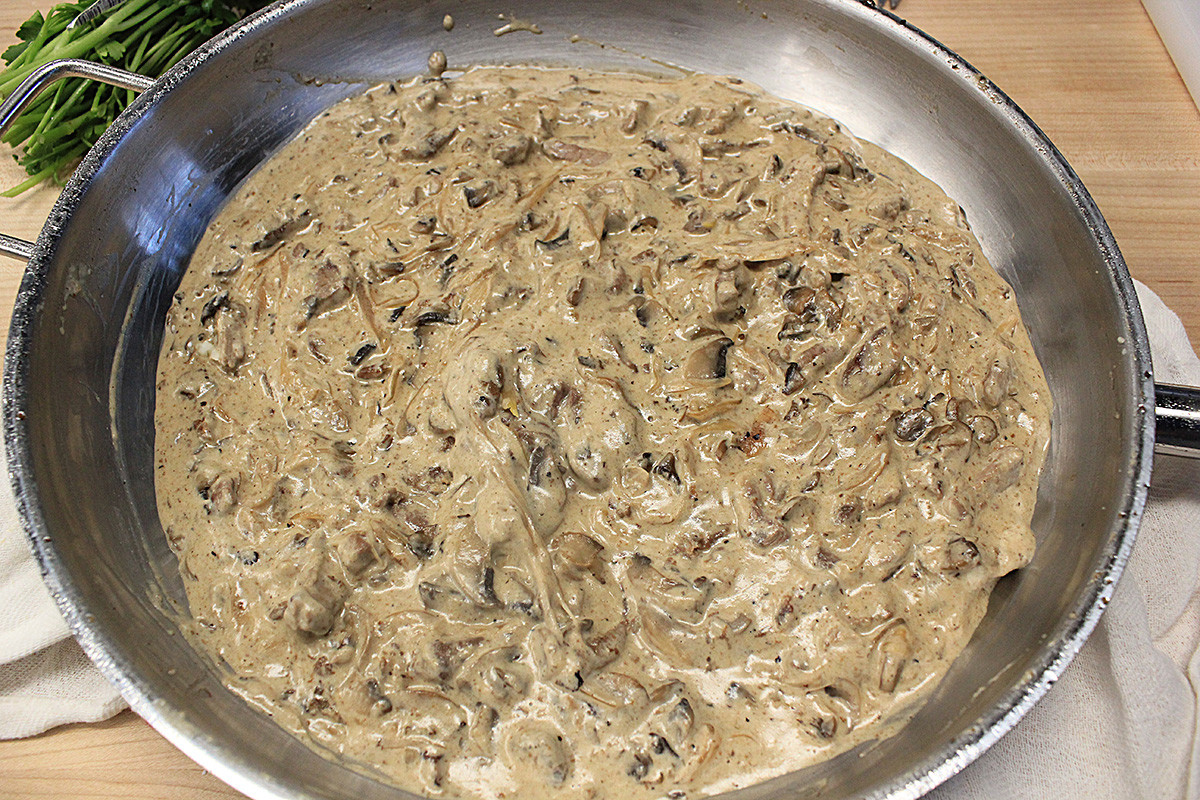 10. Let the beef braise for about 10 minutes before serving it with your garnish. 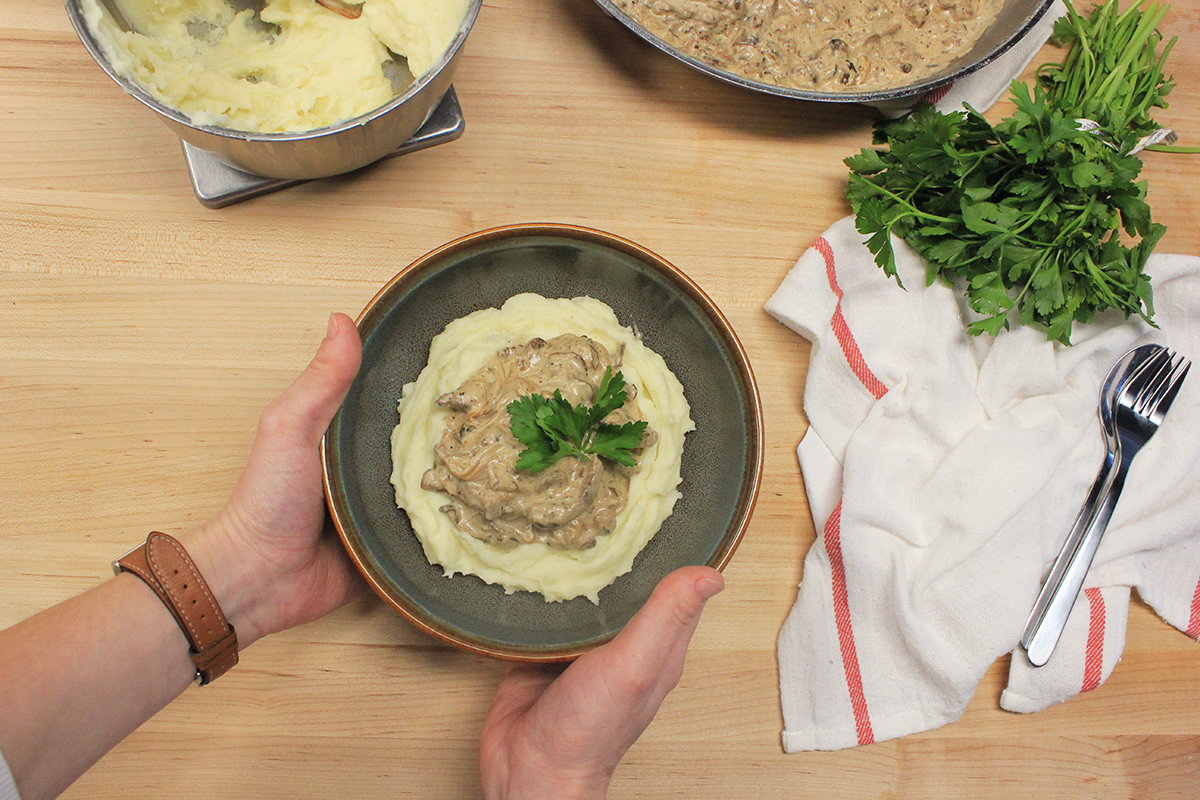 Read more: Pastila: Master an apple treat that once delighted the tsars