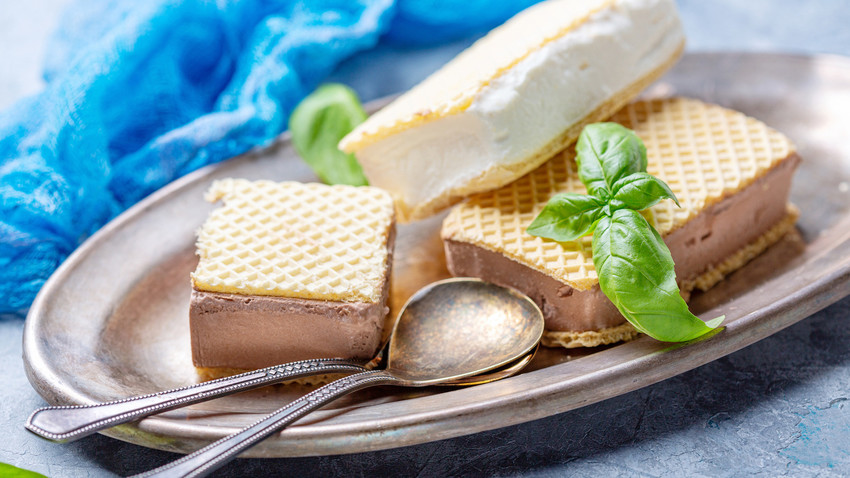 Legion Media
Take a lick of Soviet culinary chic. Why should you make crème brulee ice cream with wafers at home? Because the natural ingredients and the superb taste made it a huge hit among Soviet citizens and foreign tourists.

In the early years of ice cream production in Russia, this sweet treat was mainly sold from carts where dry ice was used to keep it frozen. It wasn’t prepackaged either; rather, the ice cream maker manually “molded” the ice cream into sandwiches with wafers, or simply sold it by weight.

Later in the 1950s, ice cream parlors started to open. They had their special atmosphere, choice and consumer culture. Going on a date to an ice cream parlor was a common thing. For a small price you could get 3 scoops of any flavor: chocolate, nuts, crème brulee, etc. If you paid a little extra, then you could put fruit jam or sprinkle shaved chocolate on top. In those ice cream parlors, you could even find delicacies such as ice cream with champagne or cognac.

In the early 1960s, mass production was introduced into the industry for filling ice cream into waffle cups, popsicles or wafer briquettes.

Crème brulee ice cream was the original Soviet ice cream sandwich and a favorite of many people. This ice cream was made of natural milk and cream, with the addition of caramel syrup, and it had a beautiful toasty color. It was spread between two wafers that stayed crunchy and light. The caramel syrup was actually made with condensed milk, and it replicated the flavor of the famous French dessert by staying true to the Russian character.

As it turns out, it is very simple to make this ice cream at home. As a result, you get the most natural product with a drop of nostalgia for Soviet ice cream parlors.

For the ice cream:

For the crème brulee syrup:

1. First, prepare the crème brulee syrup. In a small pot combine 15 ml of water, sugar and condensed milk. Place the pot on a burner and start preparing the syrup on medium heat, constantly mixing it until there’s a caramel brown color and it becomes thick. 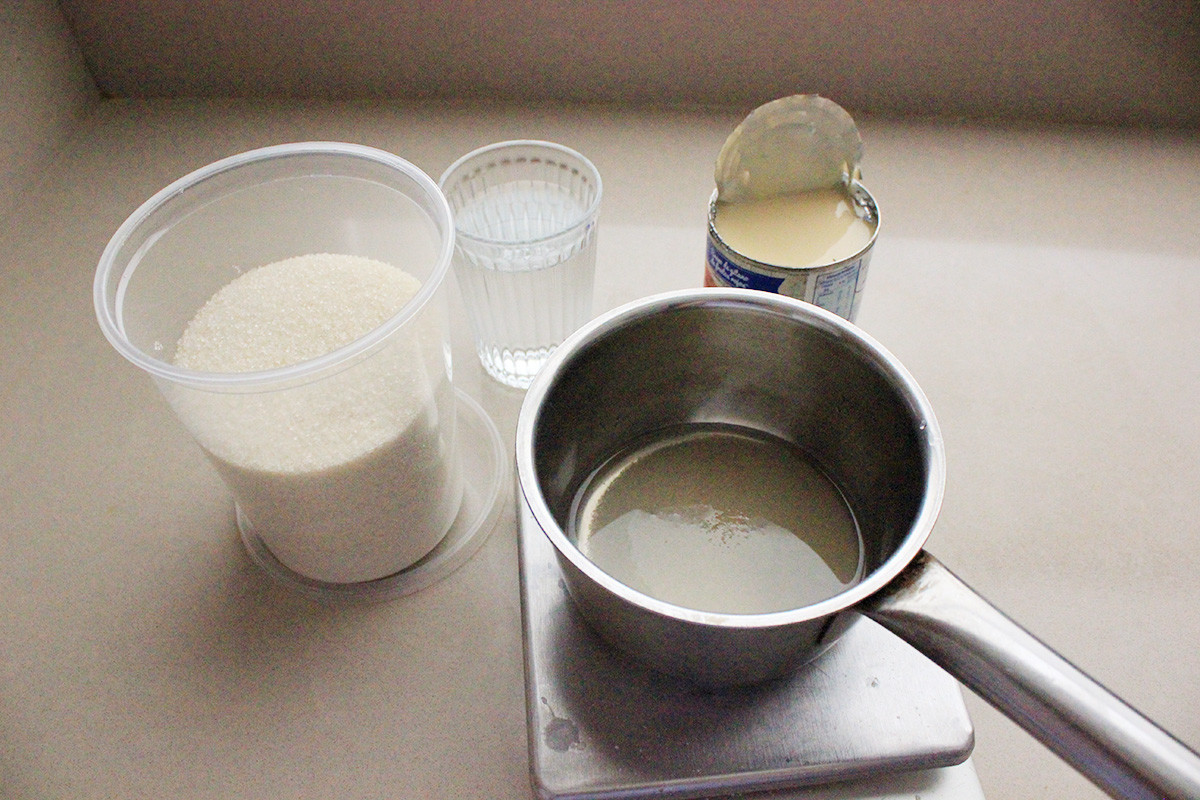 2. Carefully pour the rest of the water (100 ml) into the pot with the syrup and bring it to a boil. Simmer the syrup and continue mixing until the thick caramel dissolves in the water. Set the syrup aside to cool. 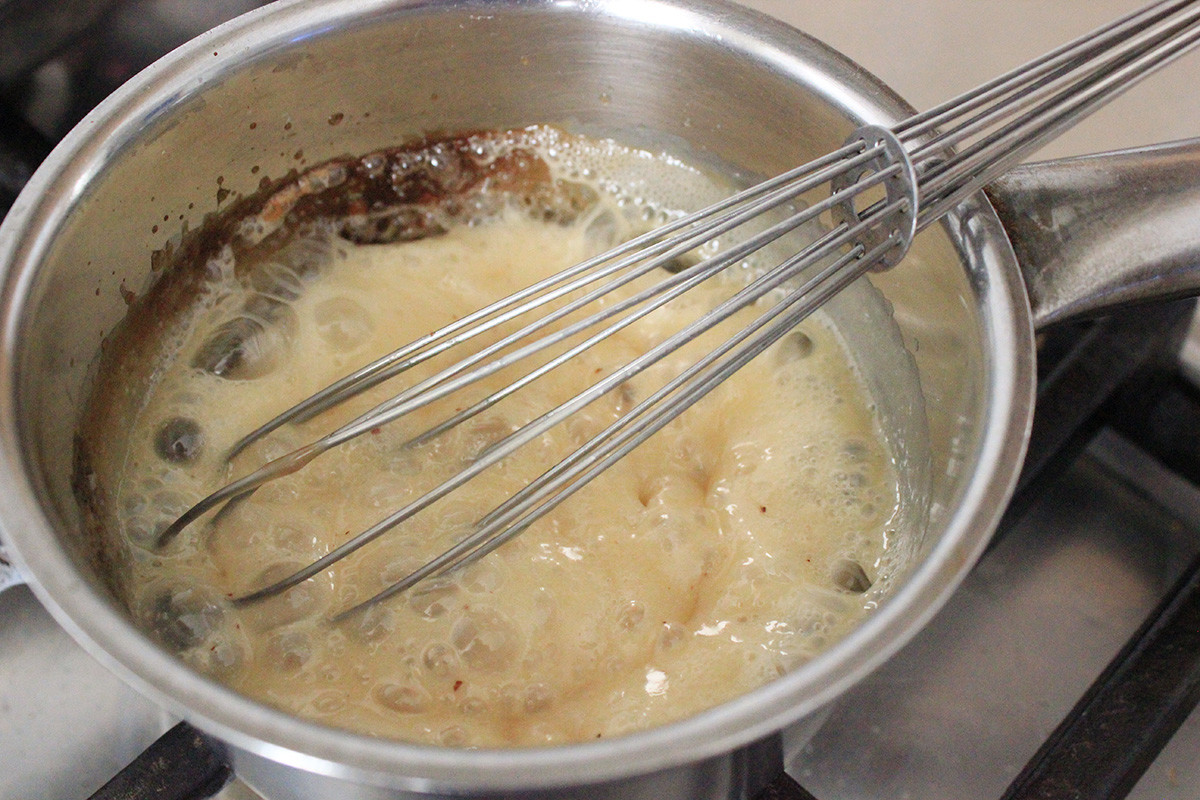 3. Meanwhile, prepare your ice cream mass. In a medium pot combine the milk, cream and condensed milk. In a small bowl combine the sugar and the agar agar powder; whisk it together. 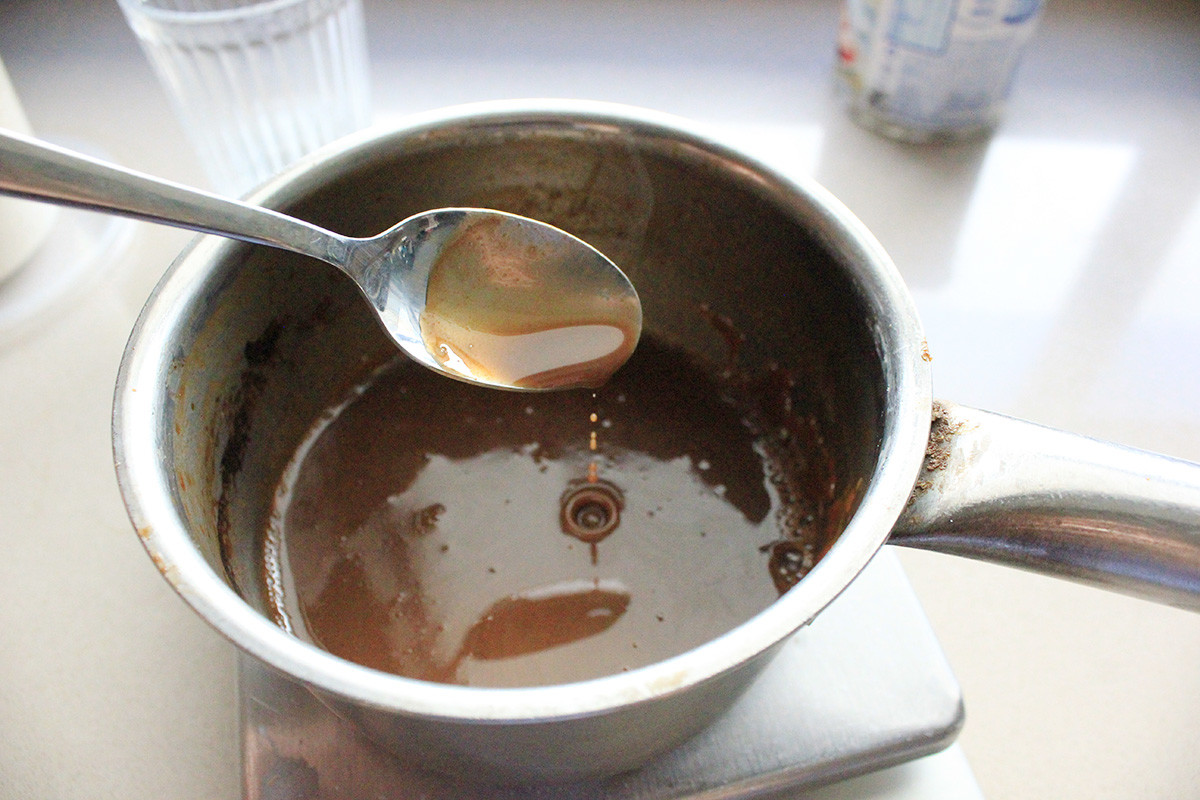 4. Place the pot with the milk and cream on medium heat and warm it up. When the mixture gets hot add the crème brulee syrup and whisk until homogenous. Now, bring the mixture to a simmer, and constantly whisking it, pour in the sugar – agar agar mixture. Continue whisking for a minute until all the powder dissolves. Take the pot off the heat and cool the mixture. Cover your ice cream mass tightly with cling wrap so that a skin doesn’t form on top, and place it in the fridge for at least 4 hours to mature. 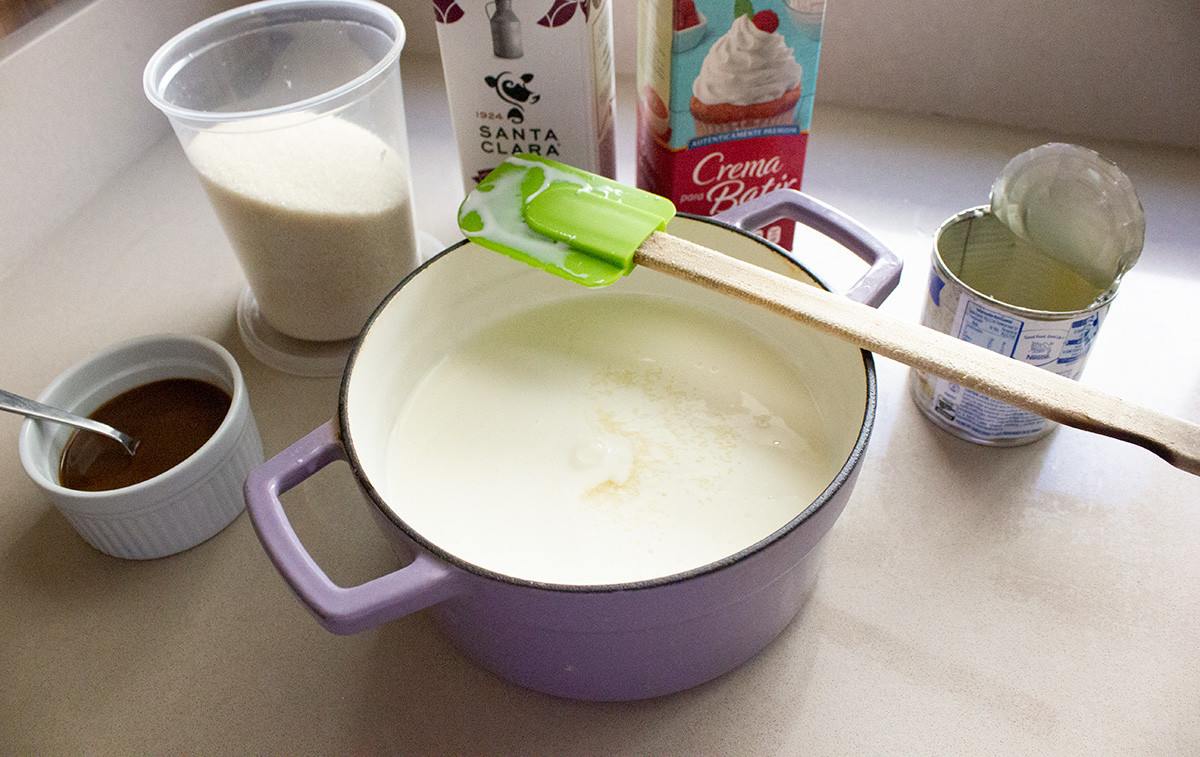 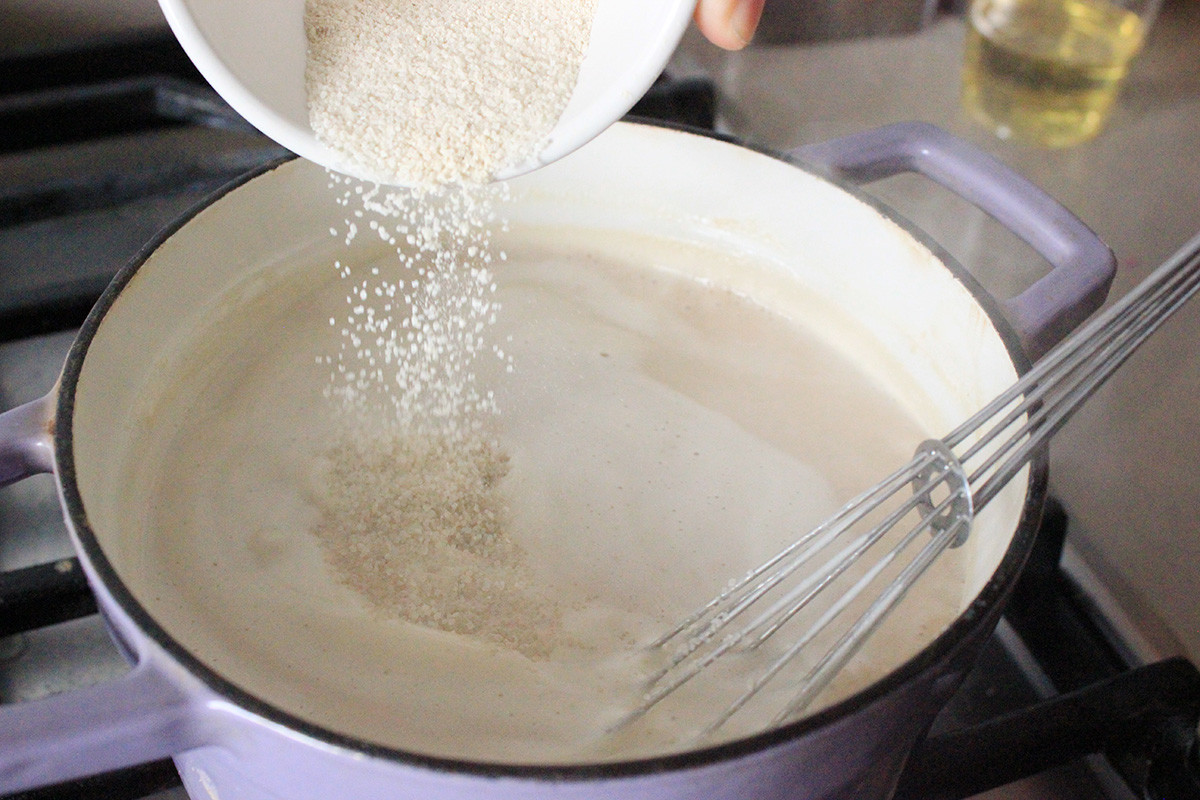 6. Spread your mass between two wafers and let it freeze for at least an hour again. 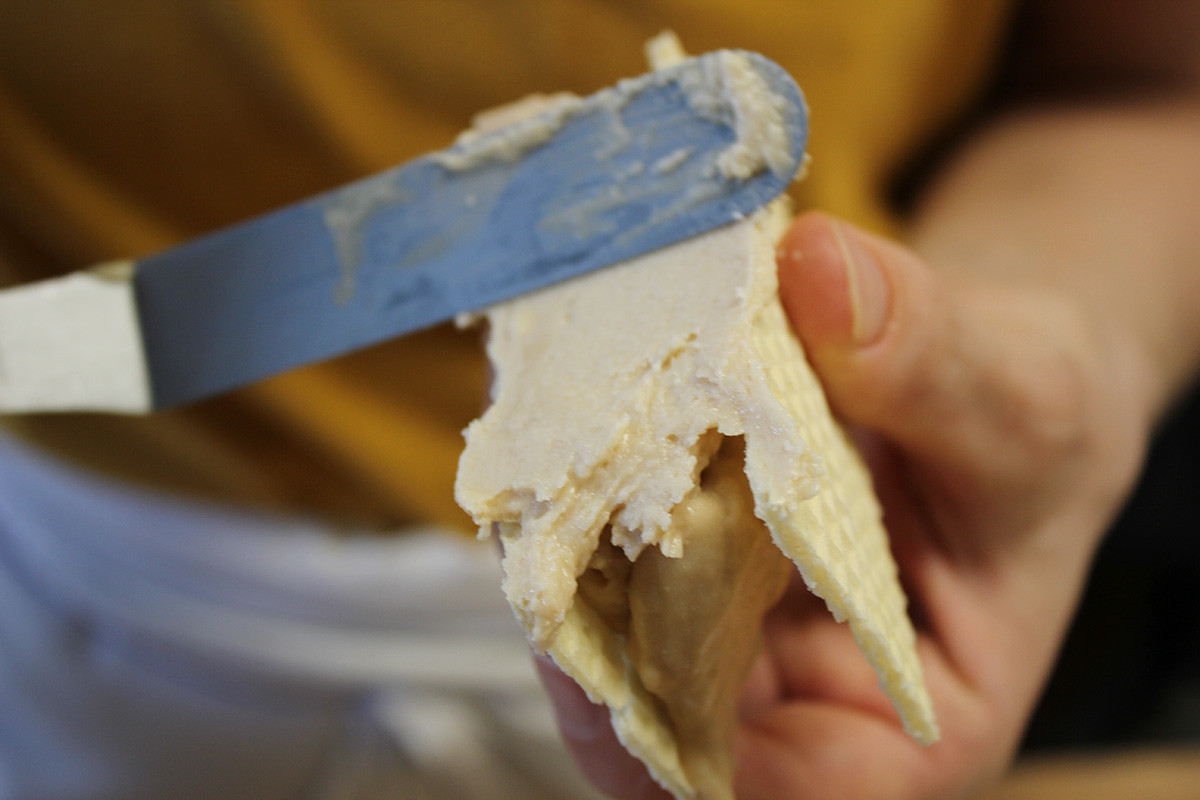 Now it’s ready for you to enjoy! 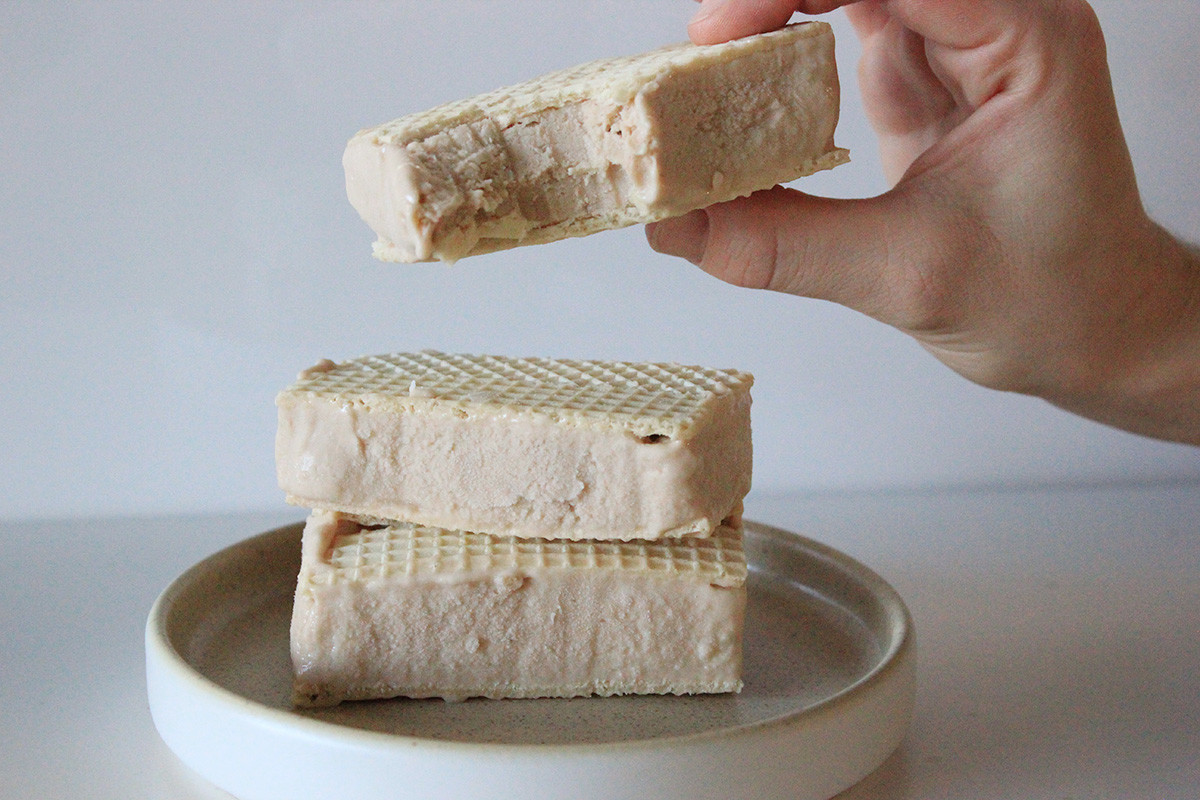