5 dishes every Russian has on their New Year table 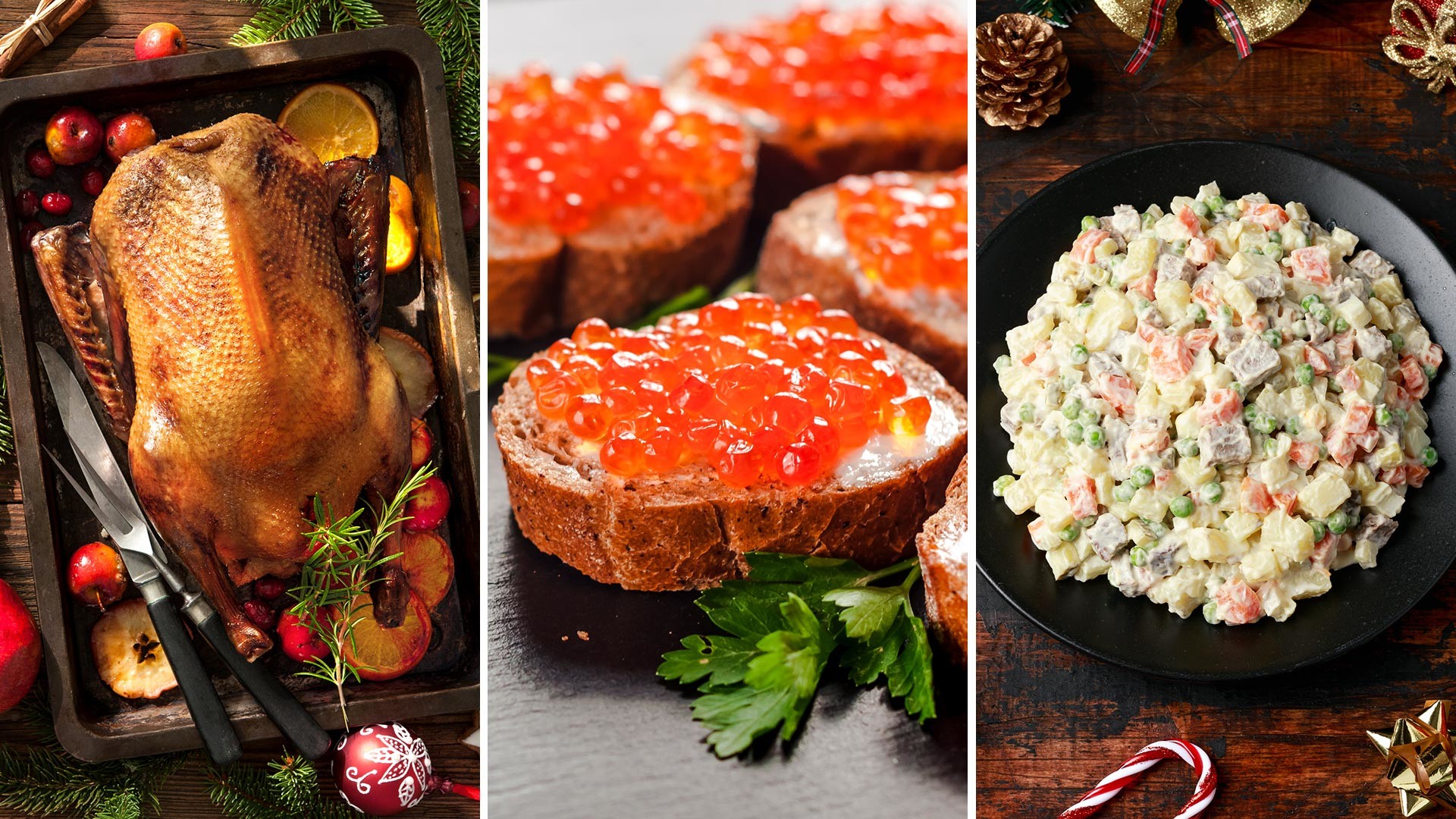 Legion Media
Preparing and serving a late night dinner for the main Russian holiday sometimes takes several days, but no Russian family would ever dare go without these dishes at their New Year’s celebration. 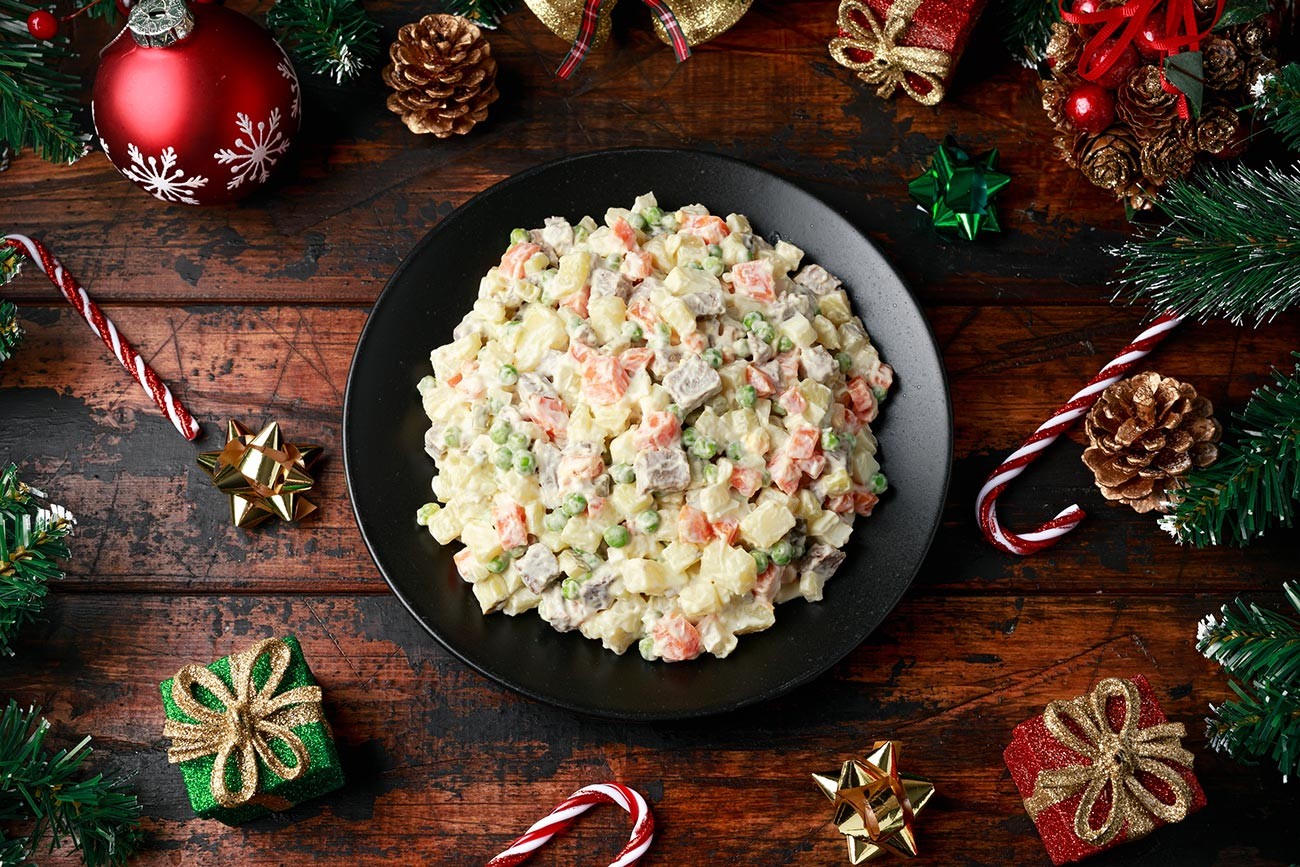 First, forget this name - in Russia we call it ‘Olivier’, and it’s the king of the table, as well as a symbol of the New Year feast. Russians dream of this salad the entire year, and make at least 5 kilos of it so they can eat it for several days during the holidays.

Here’s a classic recipe for Olivier that we have from Soviet times. It consists of boiled potatoes, carrots, eggs, ‘doctor’s sausage‘, pickled cucumbers, onion, peas and mayo. Just chop everything in equally square quantities - a la brunoise.

However, everyone has their own recipe or tradition of adding extra ingredients, such as apples, for example. Those who are keen on modern interpretations can transform the recipe and maybe add salmon or crawfish instead of sausage.

Before serving, mix the salad with mayo, and add salt. Traditional mayo can be replaced by a homemade one that certainly has less calories and is probably better for your figure. You can also add chopped herbs according to taste; Russians like to enhance the salad with parsley or dill.

Read our ultimate guide on how to cook traditional Olivier here. Or check out this crawfish Olivier recipe from a modern chef here. 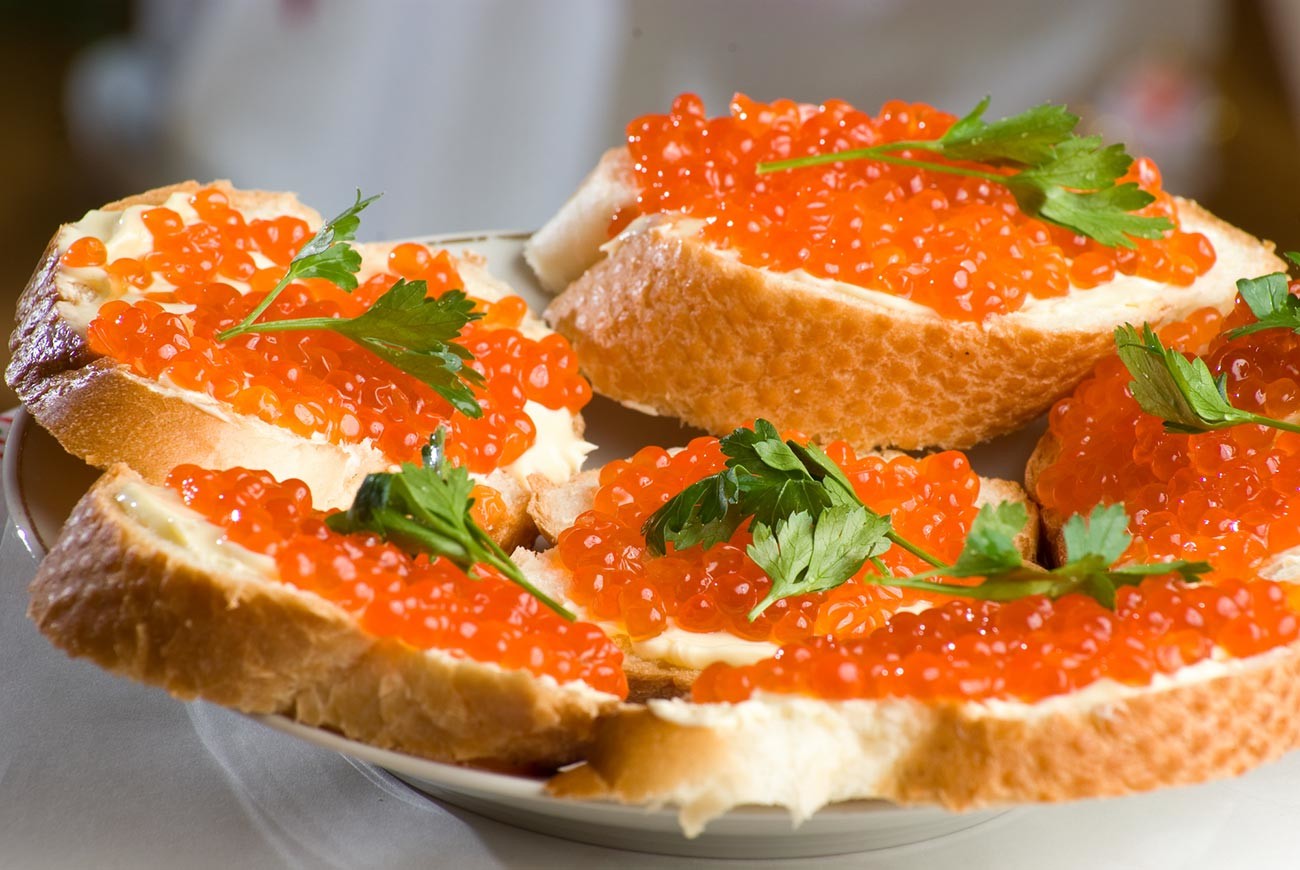 Caviar is for sure the top delicatessen and another symbol of the New Year. Even though caviar is not cheap, and many Russian families can’t afford it on a daily basis, they try to buy it for the New Year. It’s believed that a table should look ‘rich’ because people believe that the way they spend New Year’s Eve will influence how they’ll spend the entire following year.

Russians often buy a big jar or several small tins of caviar, and it’s also a great gift. Red caviar is more popular just because of its lower price compared to black caviar, but those who can afford black would be wise to buy it!

The recipe is incredibly simple - take white bread, or French baguette, or bruschetta, or tartlets - put a slice of butter and a teaspoon of caviar on top. Better to prepare just before serving, otherwise the caviar might be drу. This appetizer is perfect with champagne.

Here are some creative ideas for your caviar New Year dish. 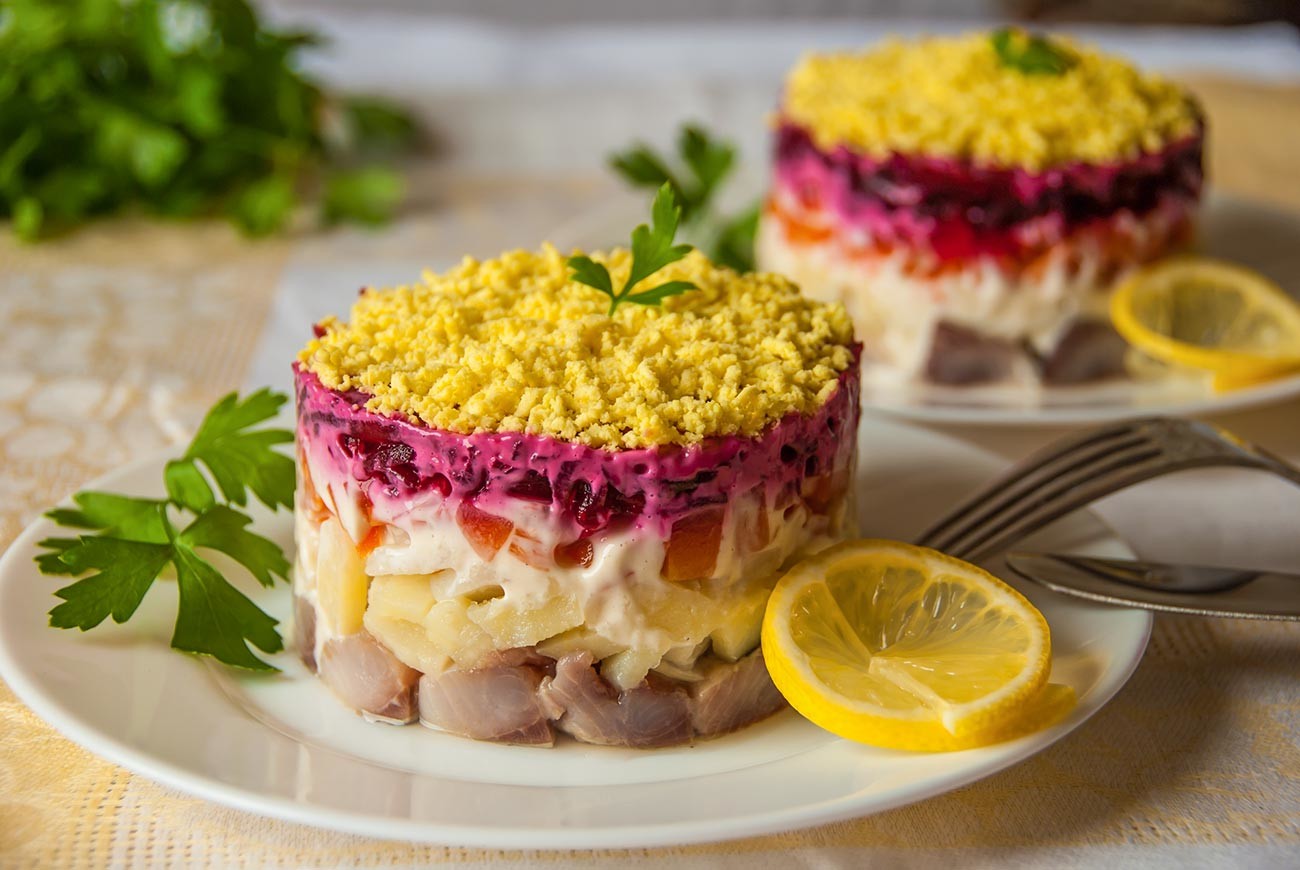 This salad usually shocks foreigners, and it’s often used in all viral videos such as ‘foreigners try Russian food’. Yes, this salad looks a little extreme, but believe us, the combination of salted fish, mayo and sweet beetroot is incredible - and you’ll love it!

This salad’s secret to success depends on the quality of the fish you choose, as well as its saltiness and softness. Other ingredients are vegetables, and since some match Olivier’s recipe, they’re boiled at the same time for both. Potatoes, carrots, beetroot, onion and eggs. But instead of chopping everything, use a grater.

The ingredients should be put on layer by layer - herring on the bottom and then the ‘fur coat’. Cover each layer with mayo. Put the salad in the fridge for several hours so it soaks up the mayo.

Watch our video recipe for cooking traditional ‘herring under a fur coat’. Culinary bloggers and famous chefs frequently suggest new takes on this traditional salad, turning it into a roll, canape, or even making a jelly of the beetroot. Their imagination is highly appreciated.

While you chop and mince all the salad ingredients, let your duck cook in the oven. Usually no one's stomach can handle it on New Year’s Eve. So, Russians have duck for lunch on January 1; after they’ve had Olivier and ‘herring under a fur coat’ for breakfast.

Duck isn’t as iconic for New Year’s as turkey is for Thanksgiving, but still, it’s very popular. Sometimes, however, families don’t have time for it and cook it later, on Orthodox Christmas, January 7.

Each family has its own recipe and traditions of cooking duck. Some stuff duck with cabbage, while others add potatoes, apples, or quinces. Any sweet taste works well with duck, so baste it with honey or berry syrup. 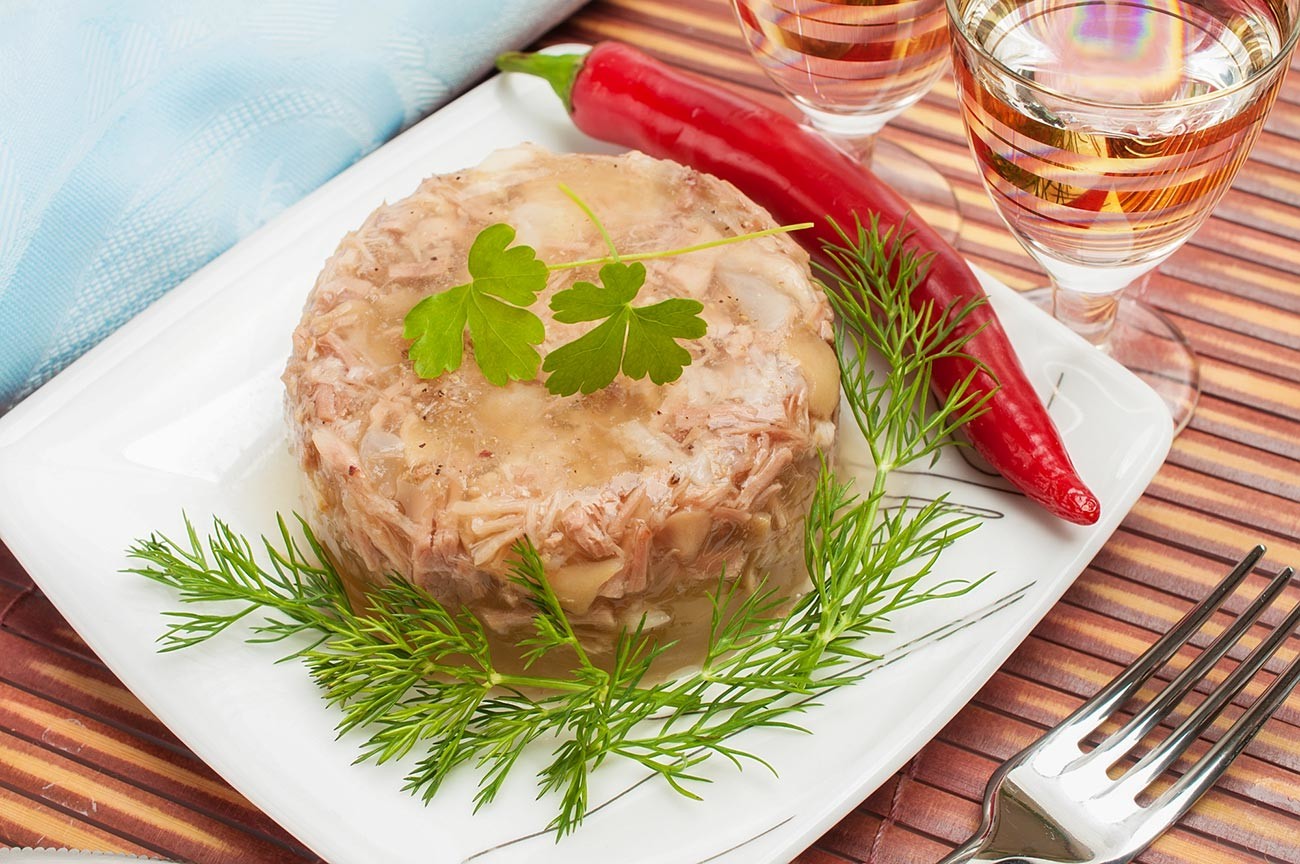 Historically, this jellied meat wasn’t for holiday feasts since it was cooked from by-products. Beef or veal shanks, hooves and heads were used, and boiled. The servants of noblemen ate this broth and the meat remained on the bones. While absolutely not a delicacy, it’s an edible, high-fat dish.

These days, it’s only cooked for holidays since it requires much time and effort. Use meat with bones, veal or beef shanks, and boil for 8-9 hours, usually on low heat for the entire night.

When the broth cools it congeals without using gelatin. This is actually the main difference from other aspic dishes. The broth covered meat can be decorated with vegetables or herbs to make it look chic.

It’s served cold and is most delicious when served with mustard or horseradish.

Watch our video recipe on how to cook kholodets here. Or find out how an Italian chef interpretes this traditional Russian dish.

Russians don’t cook desserts for the New Year’s table, because there’s too much food and no room for something sweet. However, one dessert for the New Year’s holiday, which lasts ten days in Russia, is kovrizhka (gingerbread). Read here how to make it.