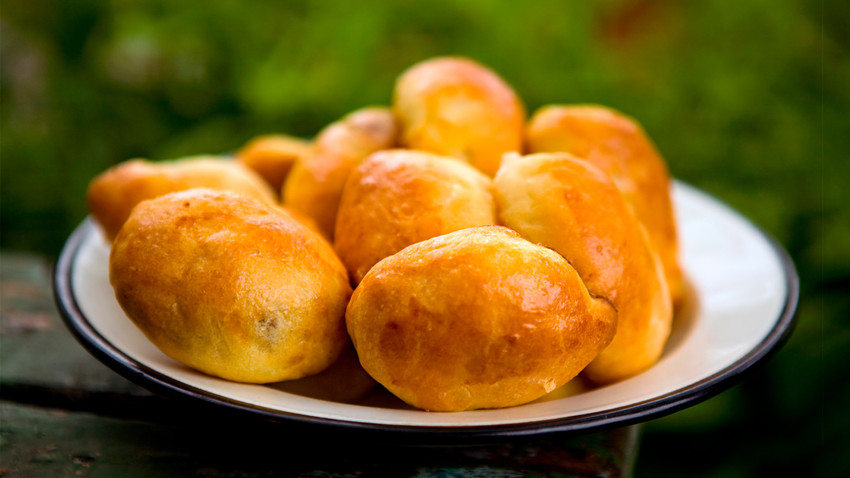 Savor the flavor of the famous Orsk pies made from a simple dough but with offals for the filling.

Legion Media
The recipe for Orsk Starogorodsky pies has long been kept secret. Nevertheless, it’s passed from generation to generation among those who once worked at that well-known Soviet-era factory. And we can bake them nowadays!

Starogorodsky pies are a culinary gem for the people of Orsk, a city about 1,500 km southeast from Moscow, nearly on the border with Kazakhstan. If you visit it once, take a look at the monument to the Starogorodsky pie. It’s a sculpture of an elderly, good-natured woman selling tasty pies.

The history of the Orsk pies dates to 1939, to the place called the Old Town (or Stary Gorod in Russian) where there was the meat-packing plant. Its products were all allocated to the front line during World War II. The plant was known for its waste-free manufacturing processes.

As the plant had the free use of tripe and the government didn’t want to get rid of it, a brilliant idea evolved in one’s mind – to use the remaining red offals, such as hearts, livers, kidneys as the pie filling. These parts are edible and even present valuable sources of protein and nutrients required to sustain a healthy diet.

The idea turned out to be a breakthrough! Every day the plant produced approximately 22,000 pies with red offals, saving the lives of hundreds of thousands of people during the War as the pies were not sent to the frontline, but remained in Orsk.

It’s important to note that during the War about 30 Soviet enterprises were evacuated to Orsk. The population doubled in a short time to 131,000, and the issue of the city’s food supply was acute. The inhabitants immediately expressed a clear preference for pies and soon they became a favorite.

The time passed and the pies gradually lost their popularity around Russia. Personally, I read about this pie in a newspaper several days ago and had a genuine liking for it at first sight. A recipe was also included in the article. The author explained that traditional Orsk pies are made with beef red offals, but instead used chicken ones. The pastry itself remained unchanged so I decided to give it a try with chicken red offals. 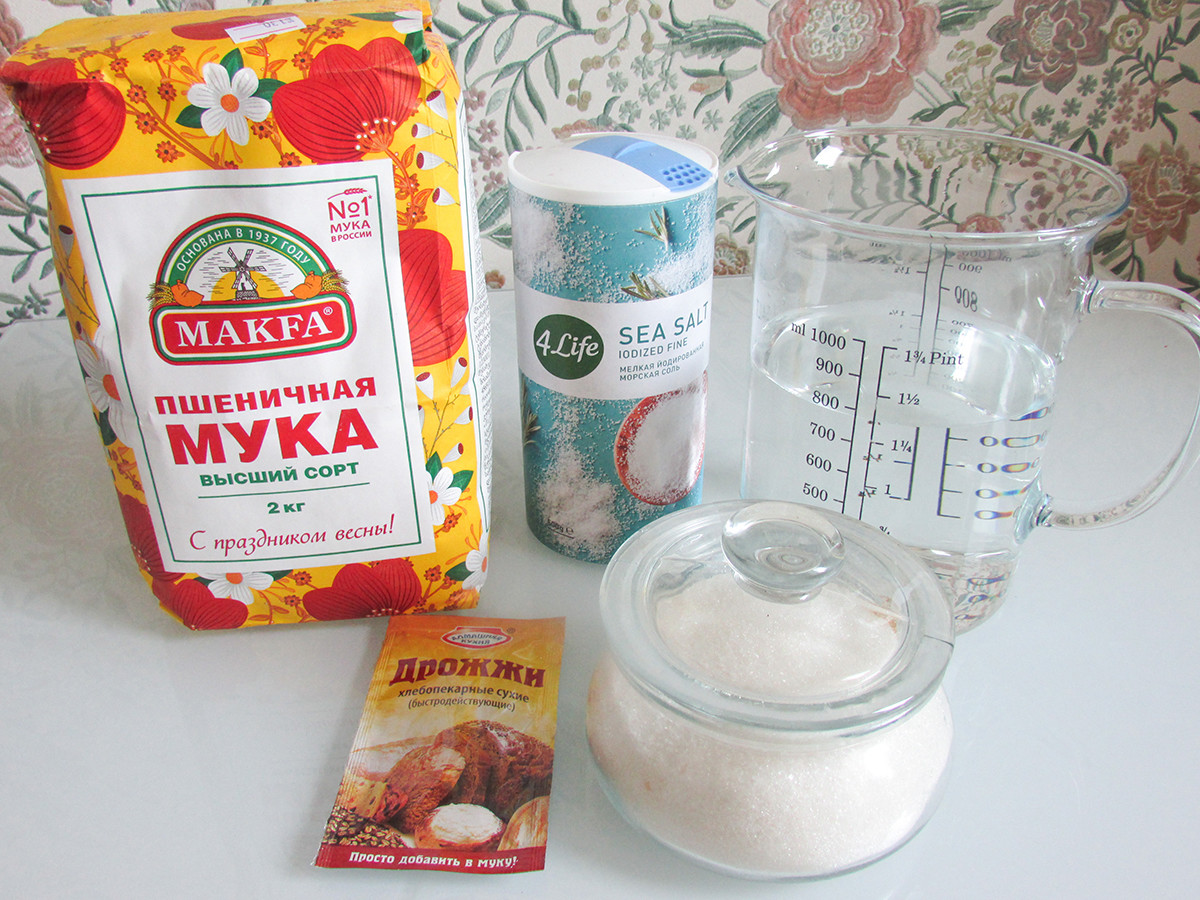 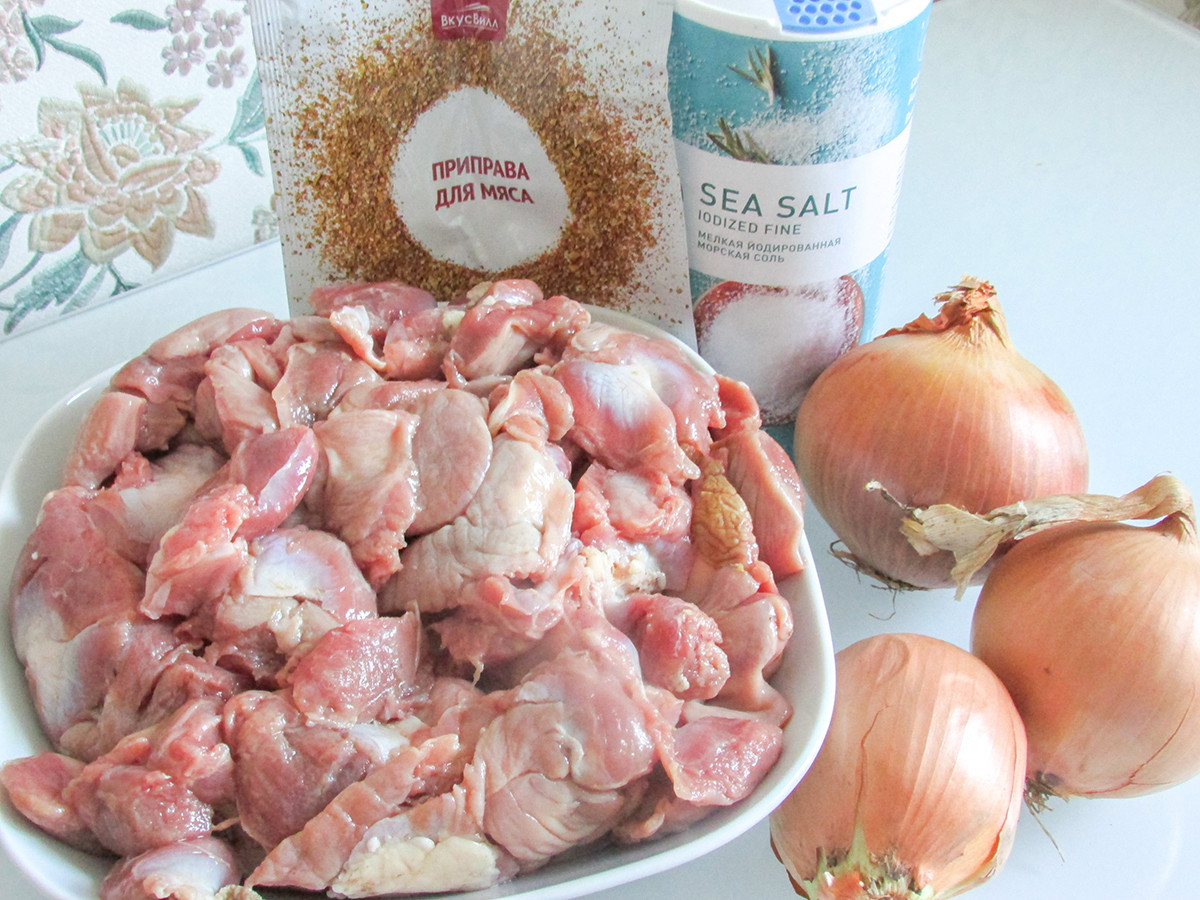 1. Sift the flour, add 6 grams of dry instant or instant yeast to the flour. 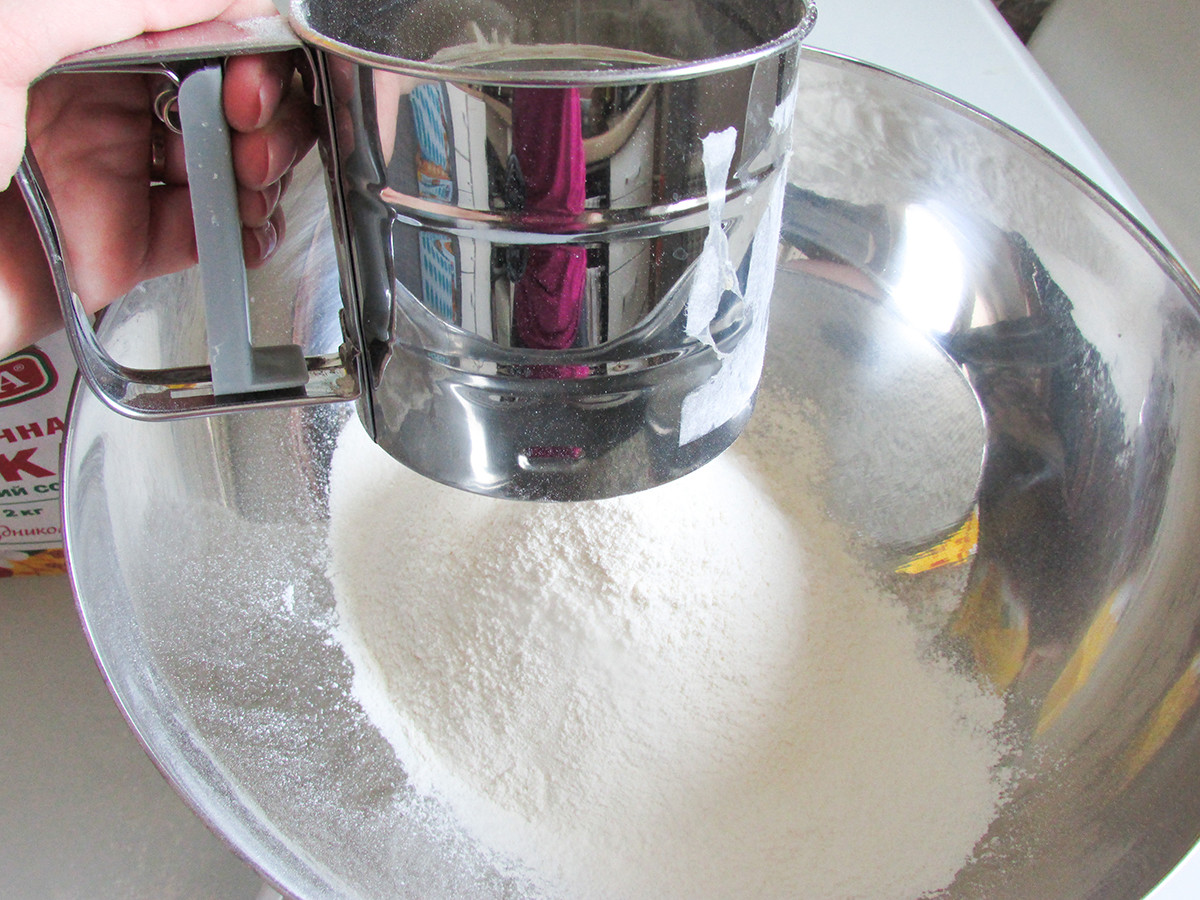 2. After that add sugar, salt and warm water. 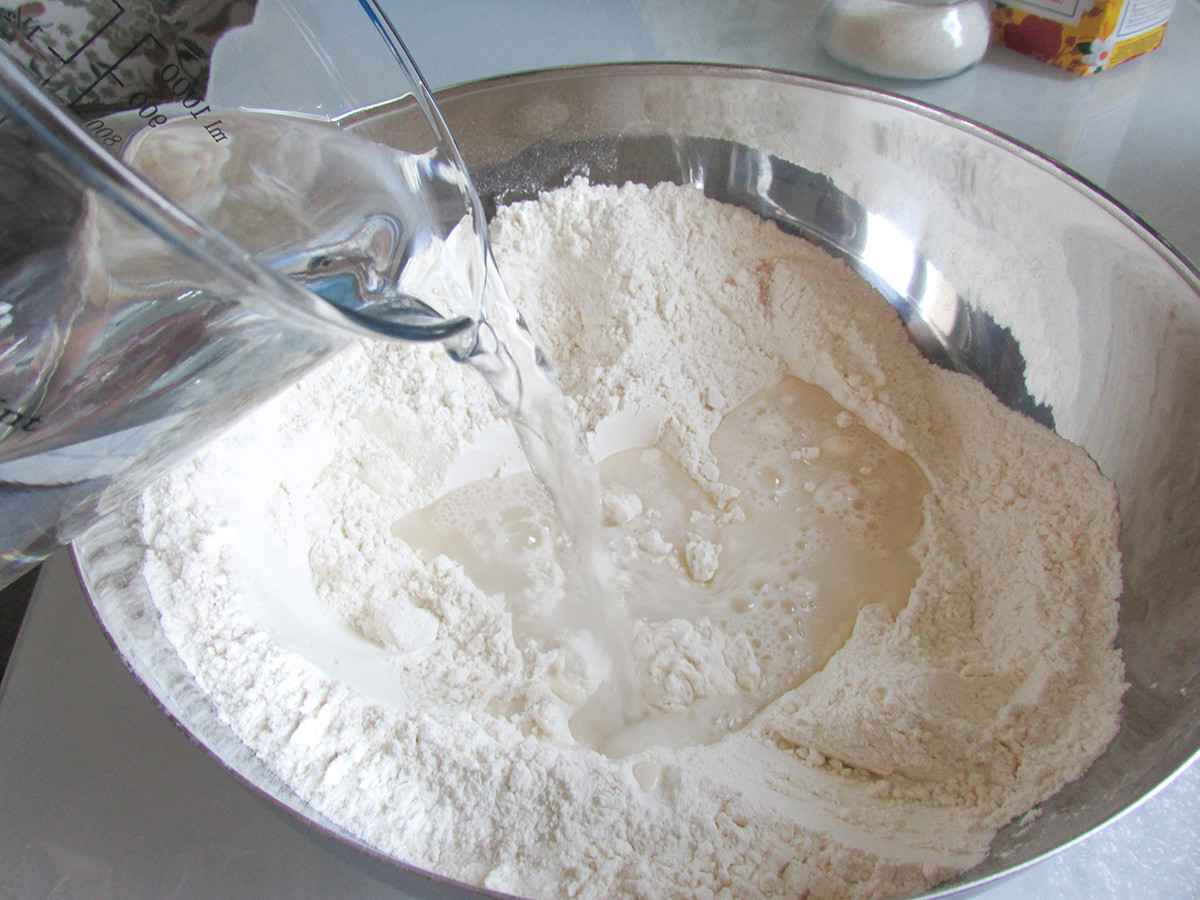 3. Mix the dough well at first with a spoon, and then with your hands greased with oil to dissolve salt, sugar and yeast, and distribute the flour evenly. It will be quite sticky, but that’s the way it should be. 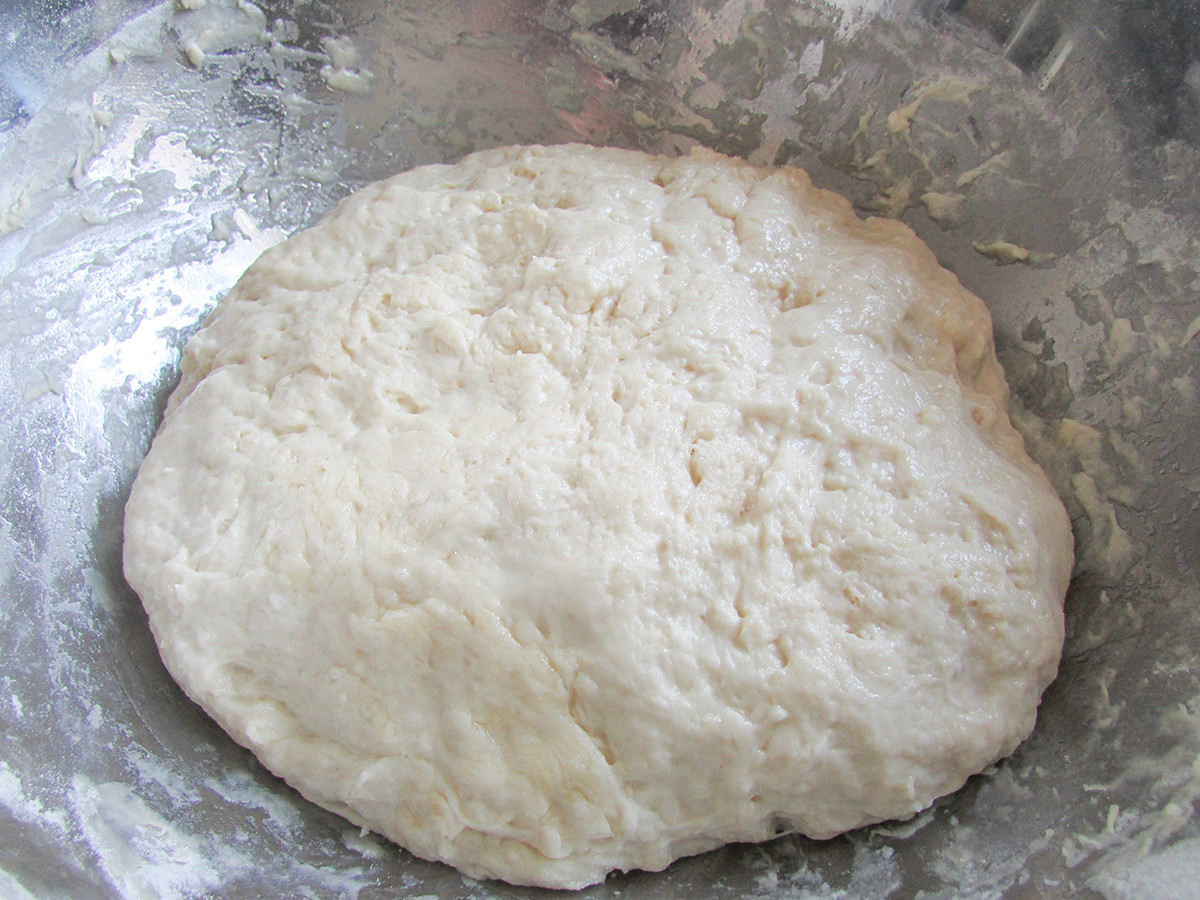 4. Cover the dough with a clean kitchen towel and put it in a warm place for about an hour for ‘sitting’. The dough should grow in volume by 1.5-2 times. If you have time, you can stretch the dough several times with your hands greased with vegetable oil. Or you can simply knead the dough a bit and leave it for another half an hour. 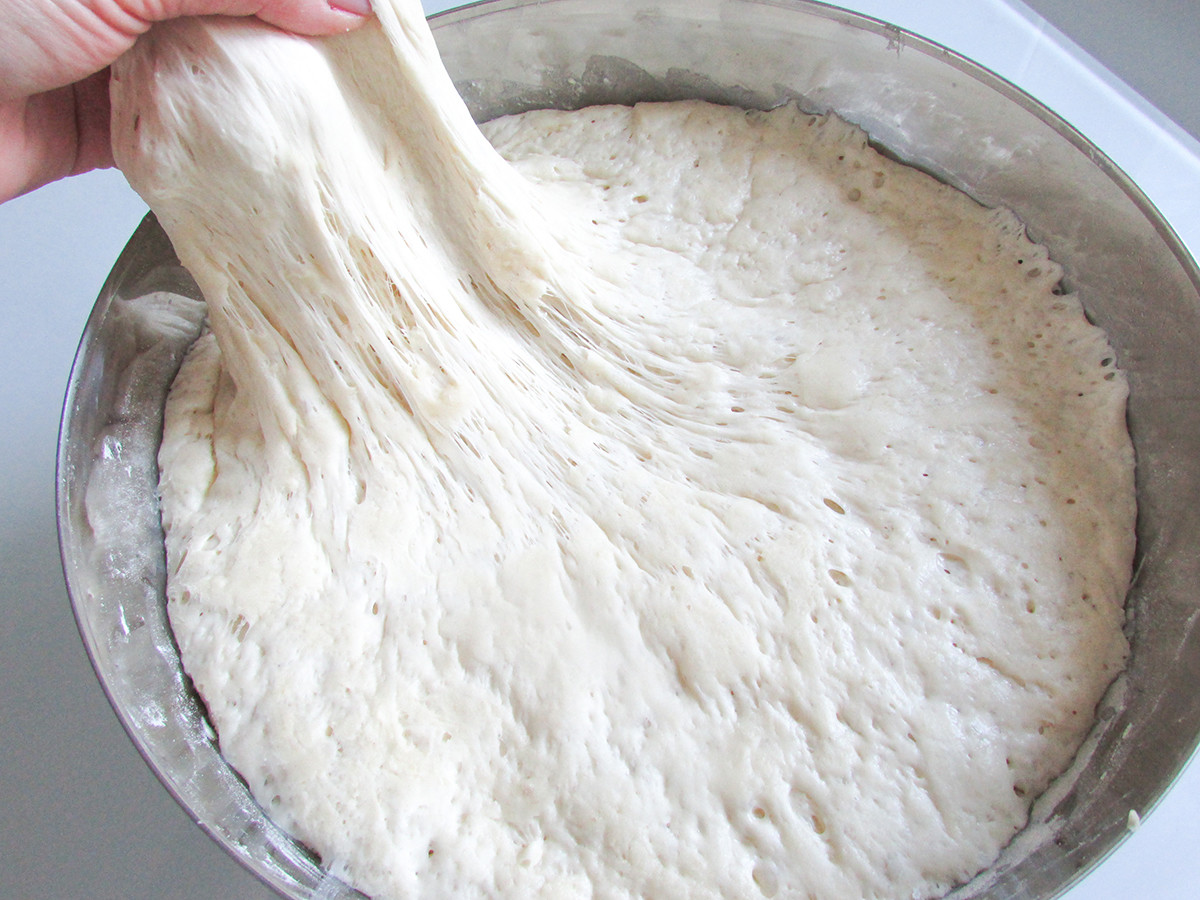 5. Now, let’s turn to the filling. First of all, blend the red offals together. 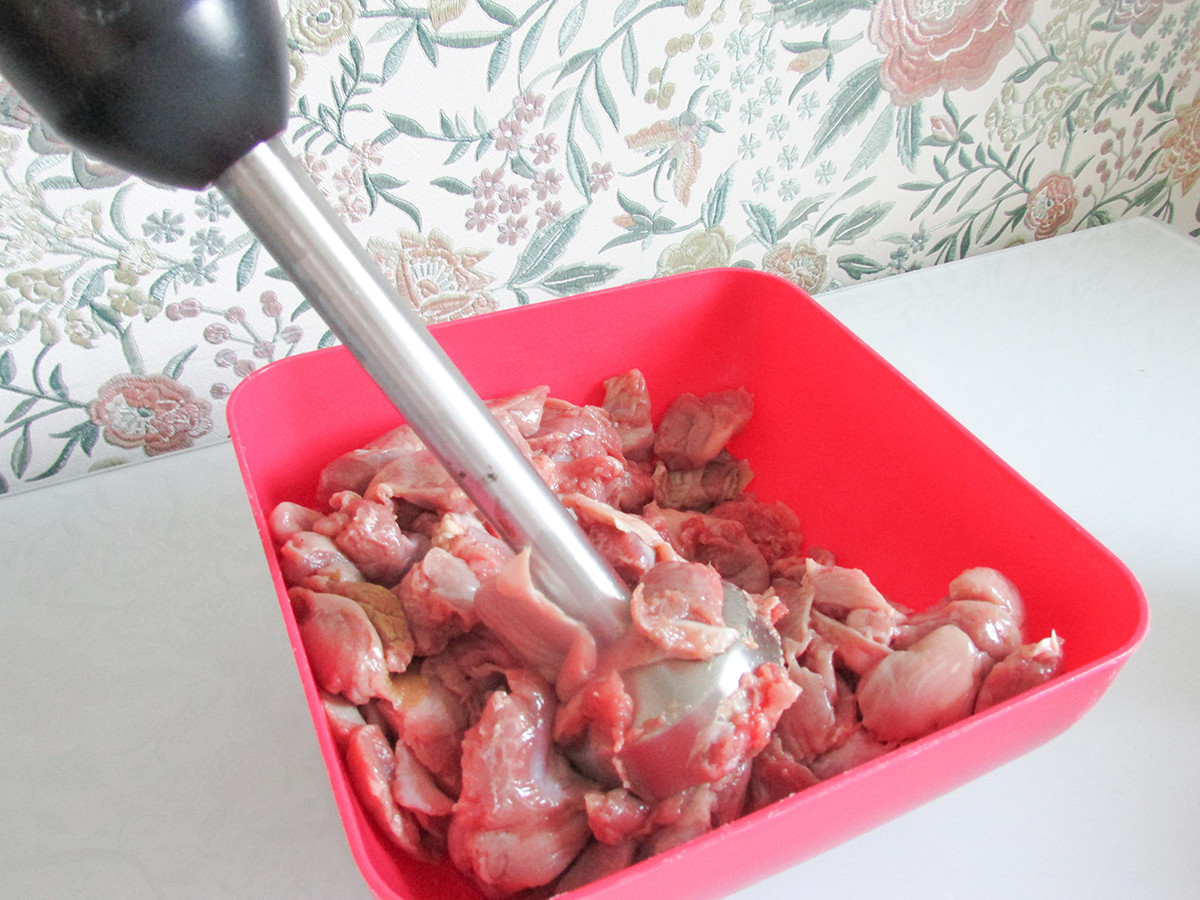 6. Then chop the onions (or blend them as well). 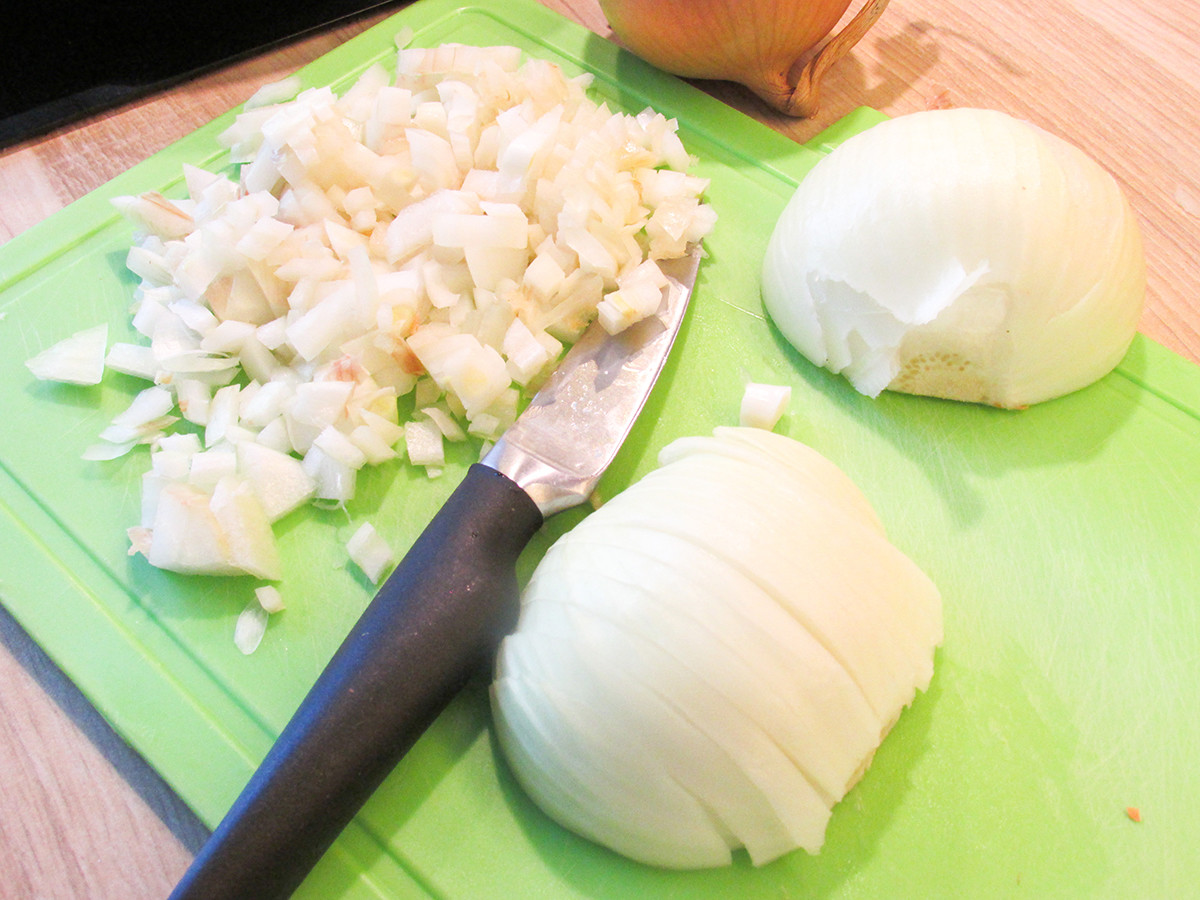 7. Add some salt and pepper to it and fry the red offals on medium heat until they are ready, and add the chopped onion to the meat mass right after turning off the heat. 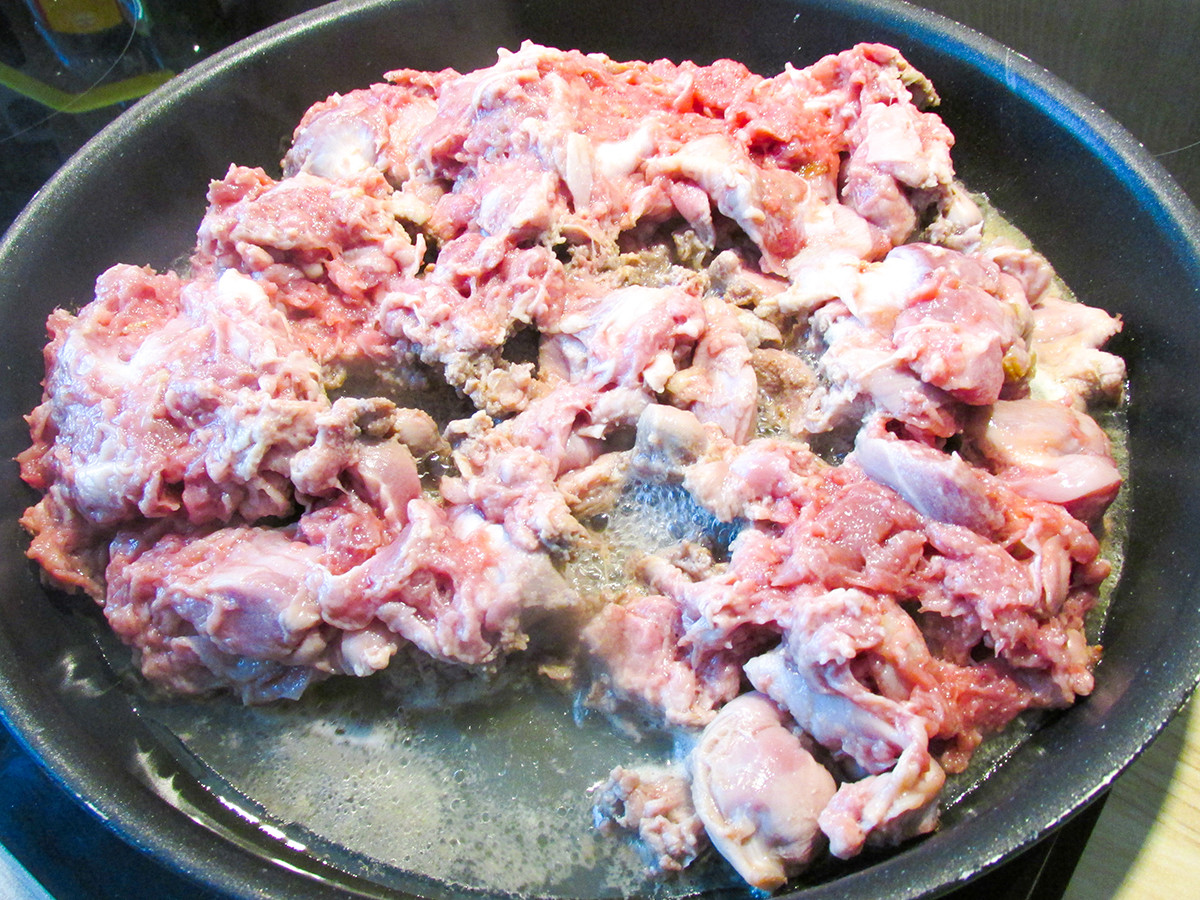 8. Mix everything together. Be sure to try the filling, add salt and some of your favorite spices. Let the filling cool completely to room temperature. 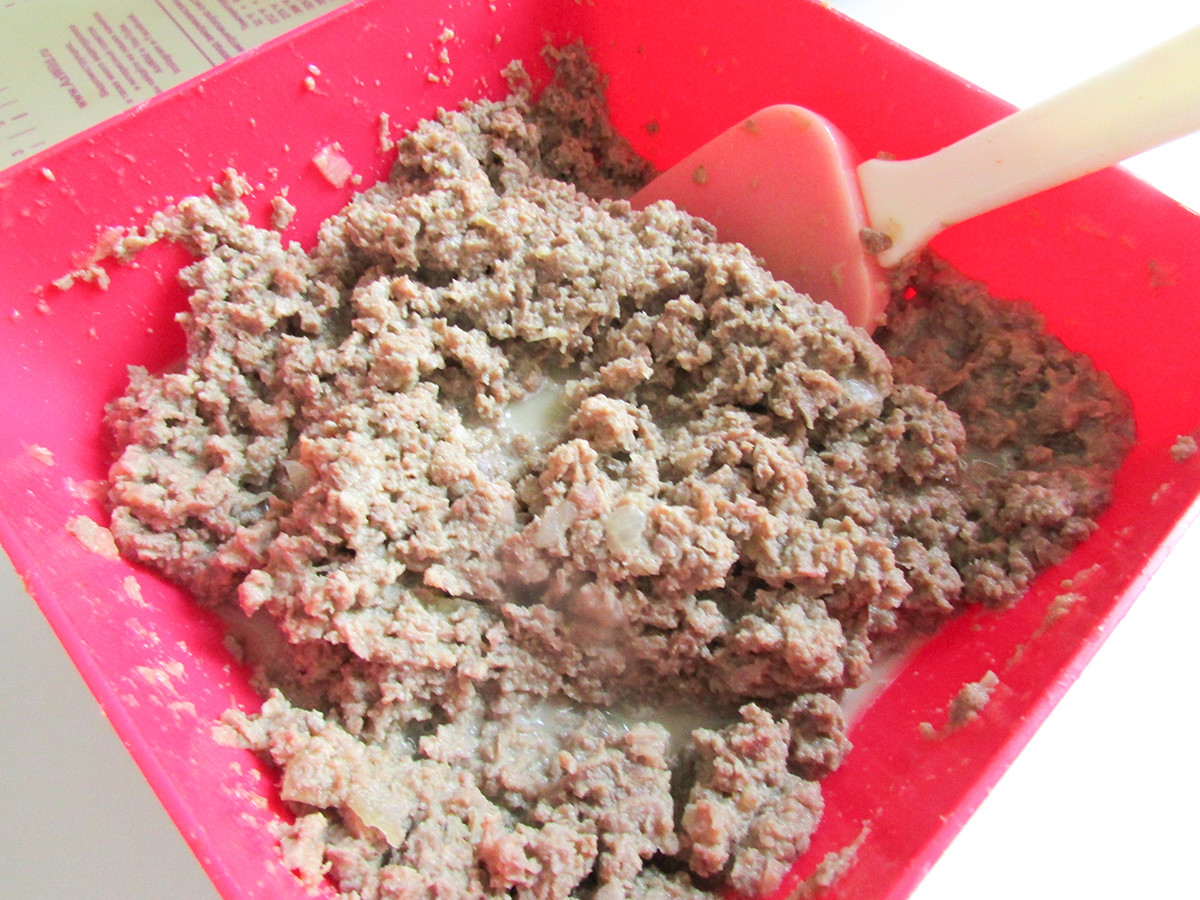 9. To fry the pies, pour a considerable amount of refined vegetable oil into the pan and turn on the heat. While doing this, go straight to shaping the pies. As a result of the rising you’ll get soft and sticky dough, so in order to make it easier to work with, constantly grease your hands with vegetable oil. Grease a baking sheet with oil, take several small pieces from the dough, then put on a baking sheet and form the circles. 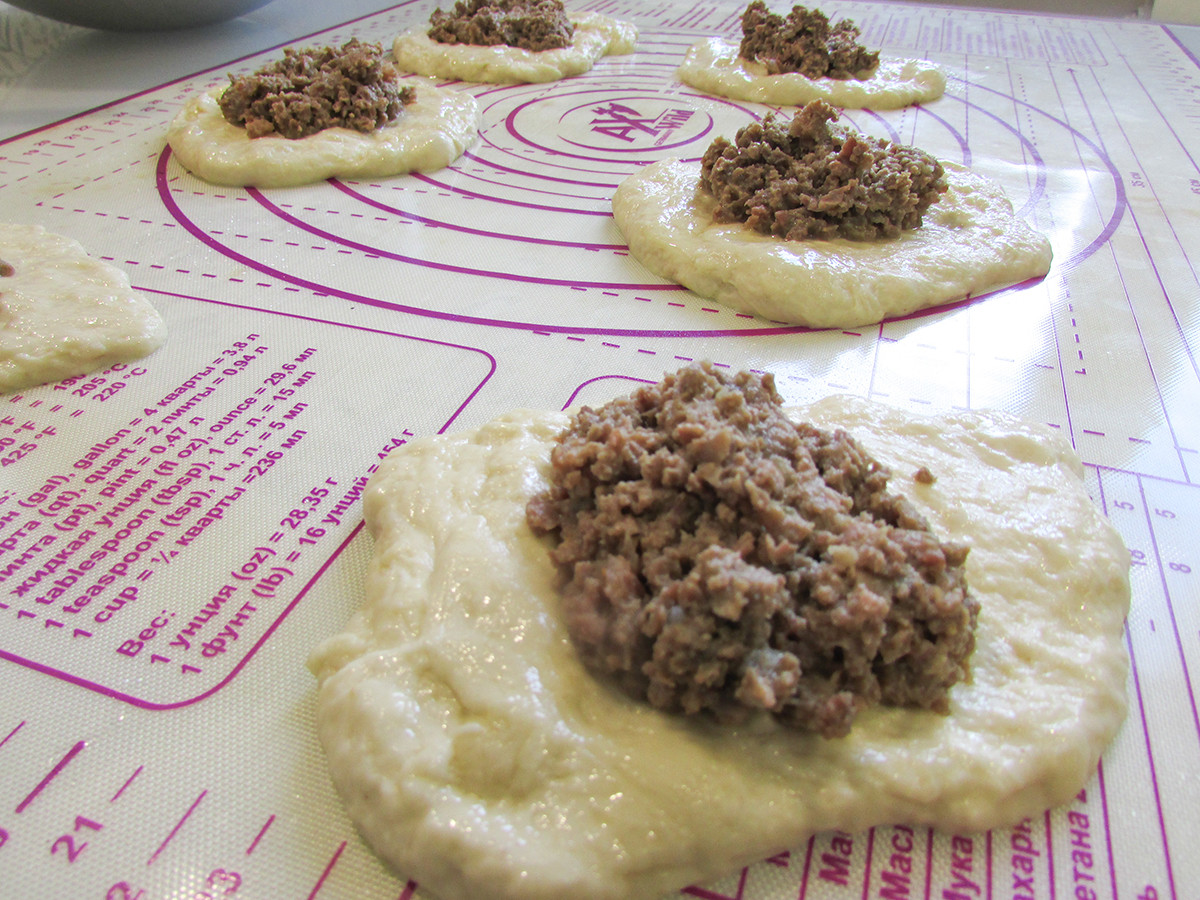 10. Lay out the filling on every circle piece of dough and form a pie. It’s more sensible to form several pies at the same time, the number of which is similar to the number of pies you’re going to put in one frying pan. 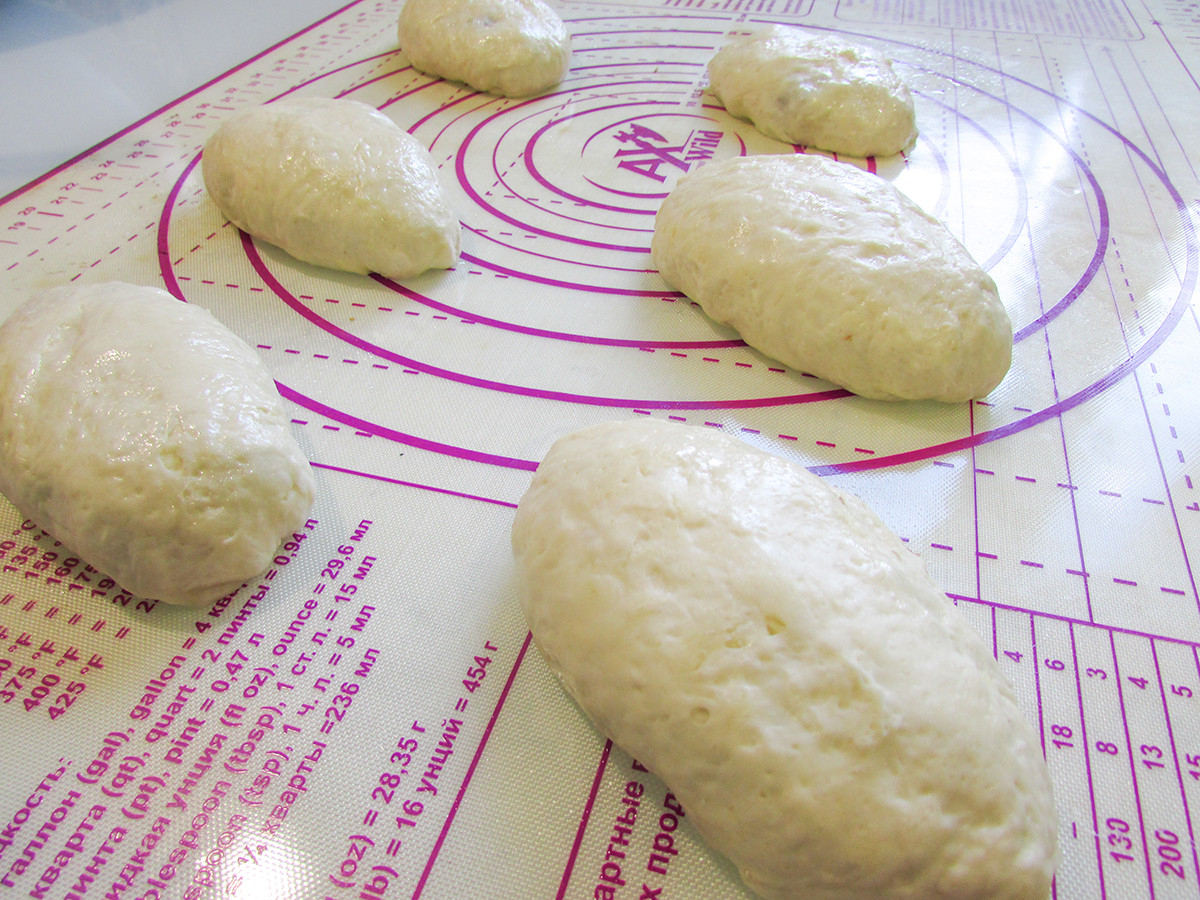 11. Put the pies in heated vegetable oil and fry until golden brown on both sides. 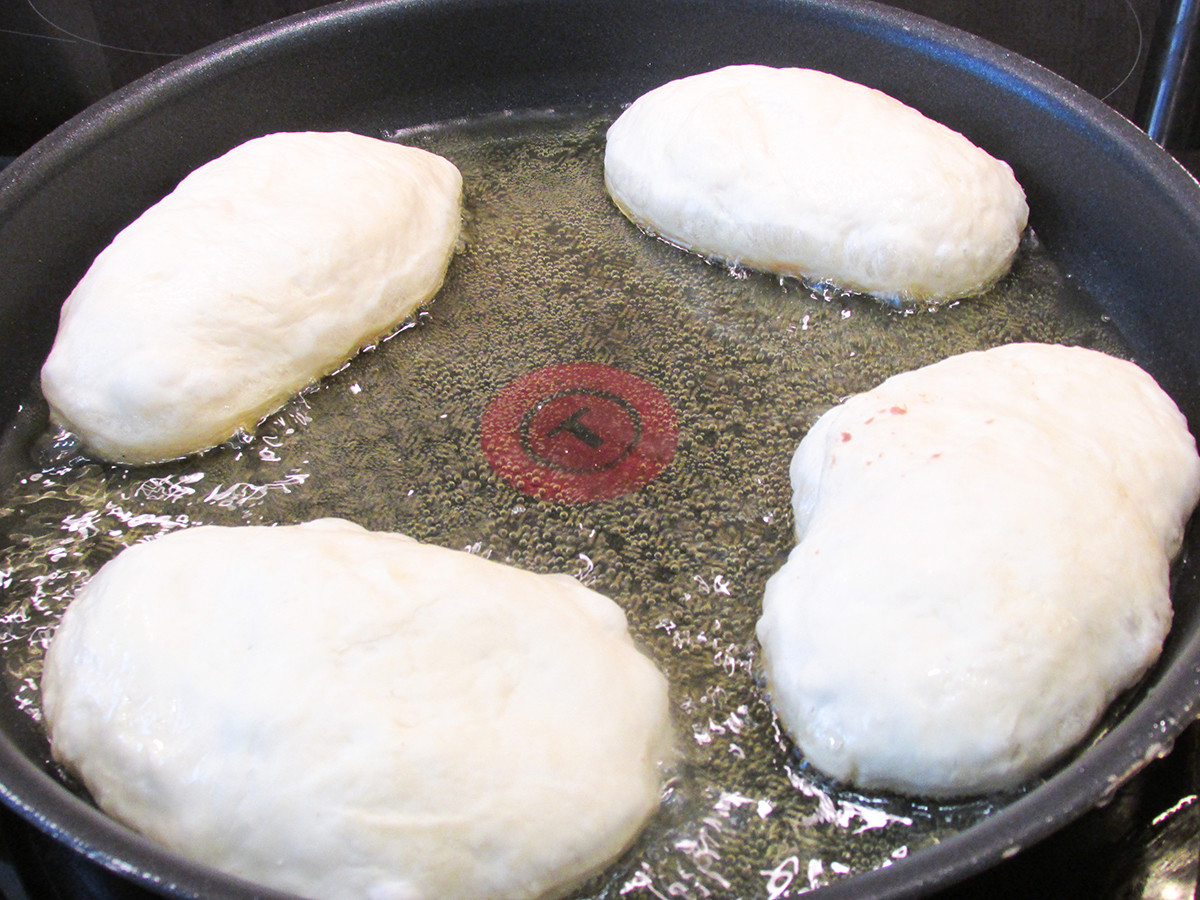 12. Put the fried pies on paper towels to remove the remaining grease. 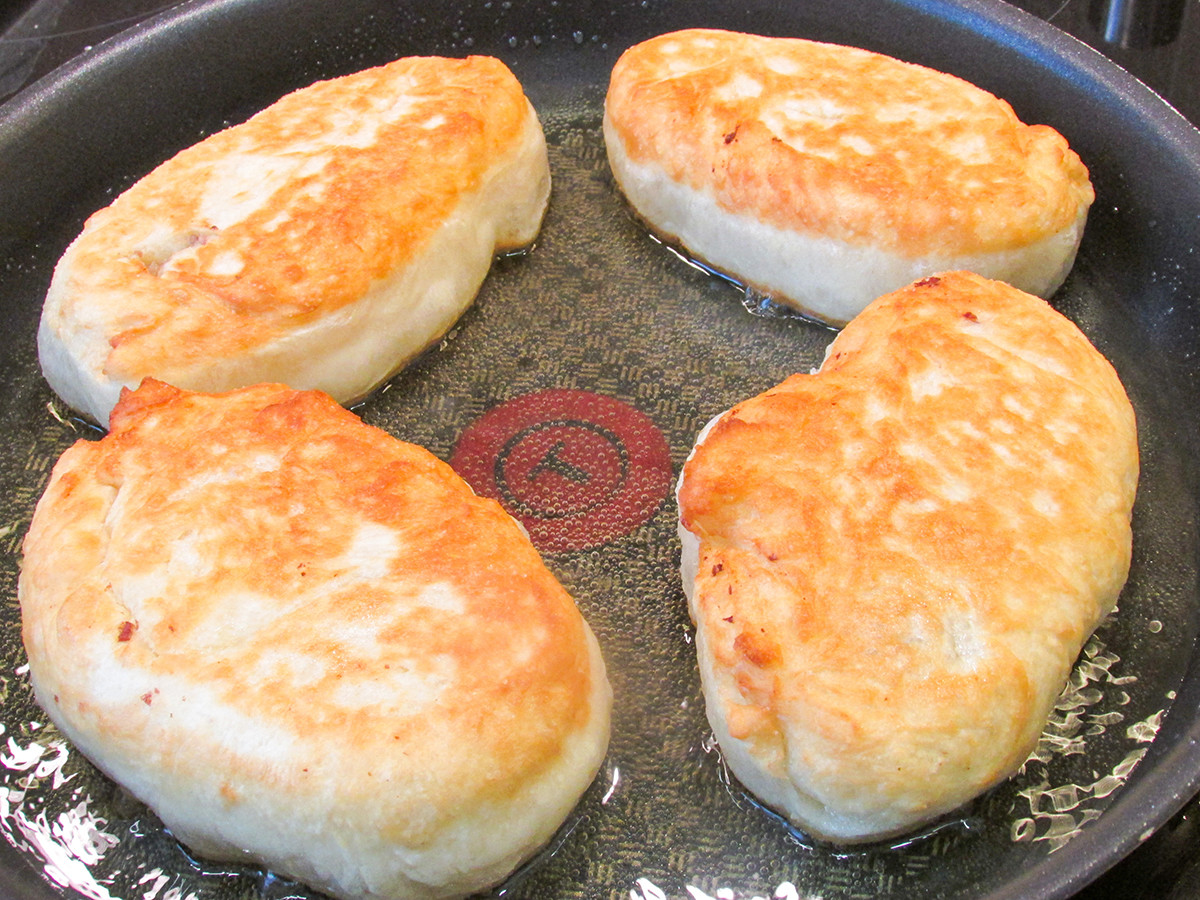 13. As a result, I got 25 large pies with red offals that are very nourishing! Enjoy! 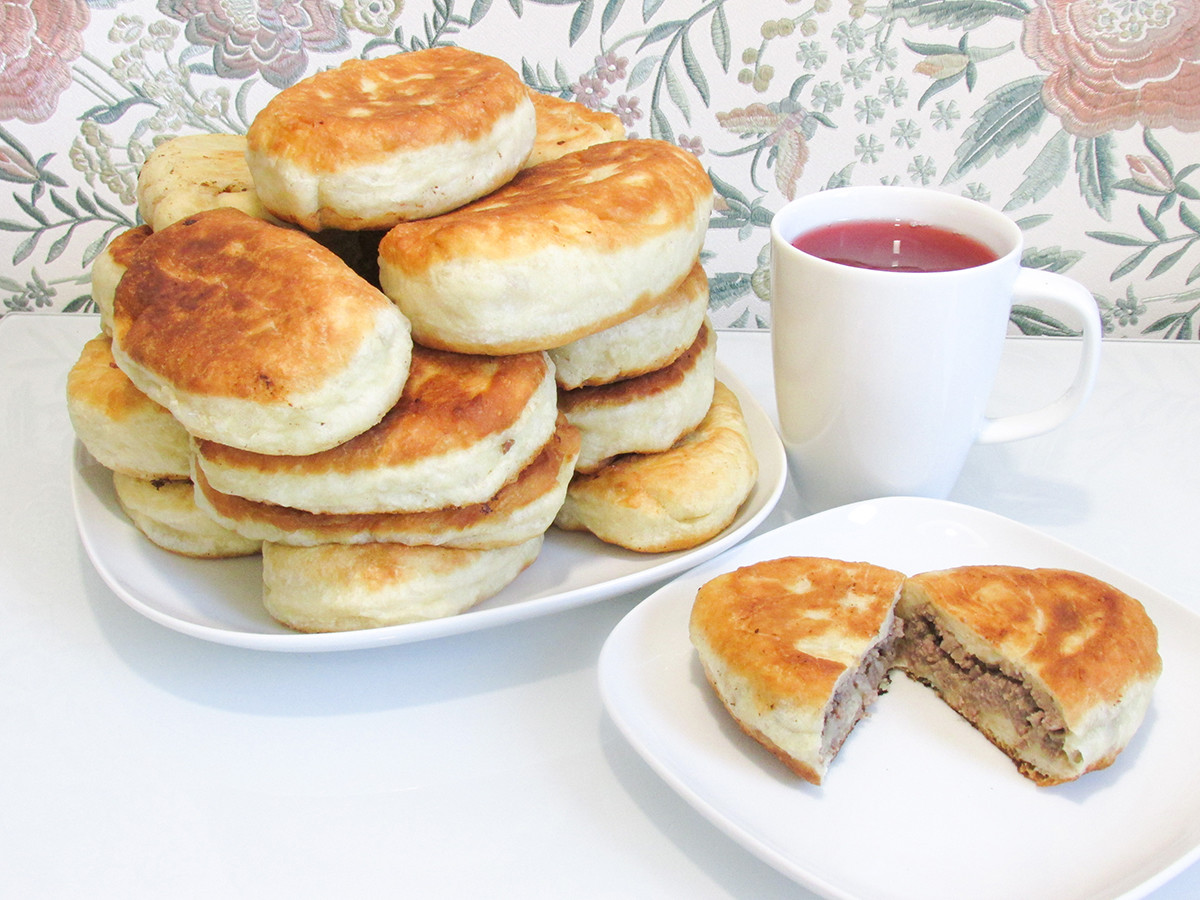