Crimean churchkhela: Nuts and juice in one dessert (RECIPE) 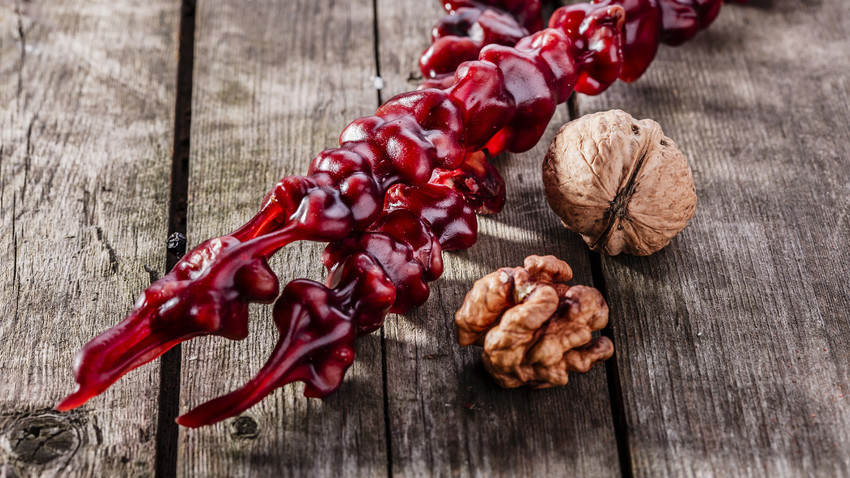 Legion Media
This edible souvenir is very popular among tourists to Sochi or Crimea.

Churchkhela is a dessert made out of fried crispy walnuts and sweet grape juice, and which is boiled to cream-like consistency. Both adults and children love this delicious dessert.

The word ‘churchkhela’ is quite an old one and consists of two roots - ‘chur’ that means ‘cold’, and ‘chkhel’ that is translated as ‘hot’. This word combination isn’t random as it coincides with the cooking process: first of all, the nascent churchkhela is immersed into a hot, consistent juicy mass, and after that, it’s cooled by using threads to hang it.

While churchkhela is a traditional Georgian dessert, it’s also very popular on Russia’s Black Sea coast. The recipe, as well as the shape, hasn’t changed since the 11th-12th centuries. In those distant times, housewives cooked and gave churchkhela to their husbands when they went to war. Legend says that churchkhela was the most substantial kind of food, a kind of ‘superfood’ nowadays, and for good reason - nuts are incredibly nutrient-rich foods. Two churchkhela were enough to provide energy to endure long, hard days of fighting. Moreover, churchkhela can be preserved for a long time, and so, one could take a large amount of it for nourishment during war.

One other benefit is that it’s very healthy. Churchkhela is made only from wholesome natural ingredients. Still, one should be careful not to eat too much, especially if one is obese, or has diabetes, or is pregnant.

In my family, this sweet treat is associated, first of all, with summer trips to the seaside. The word churchkhela vividly reminds me of the Black Sea resorts. Everybody who has been to these places can confirm that almost every beach or alley is occupied with small local grocery stores full of red, yellow, or green ‘icicles’.

It’s probably difficult and quite time-consuming to make churchkhela at home, so I suggest we make a light version without compromising the delightful eating experience. 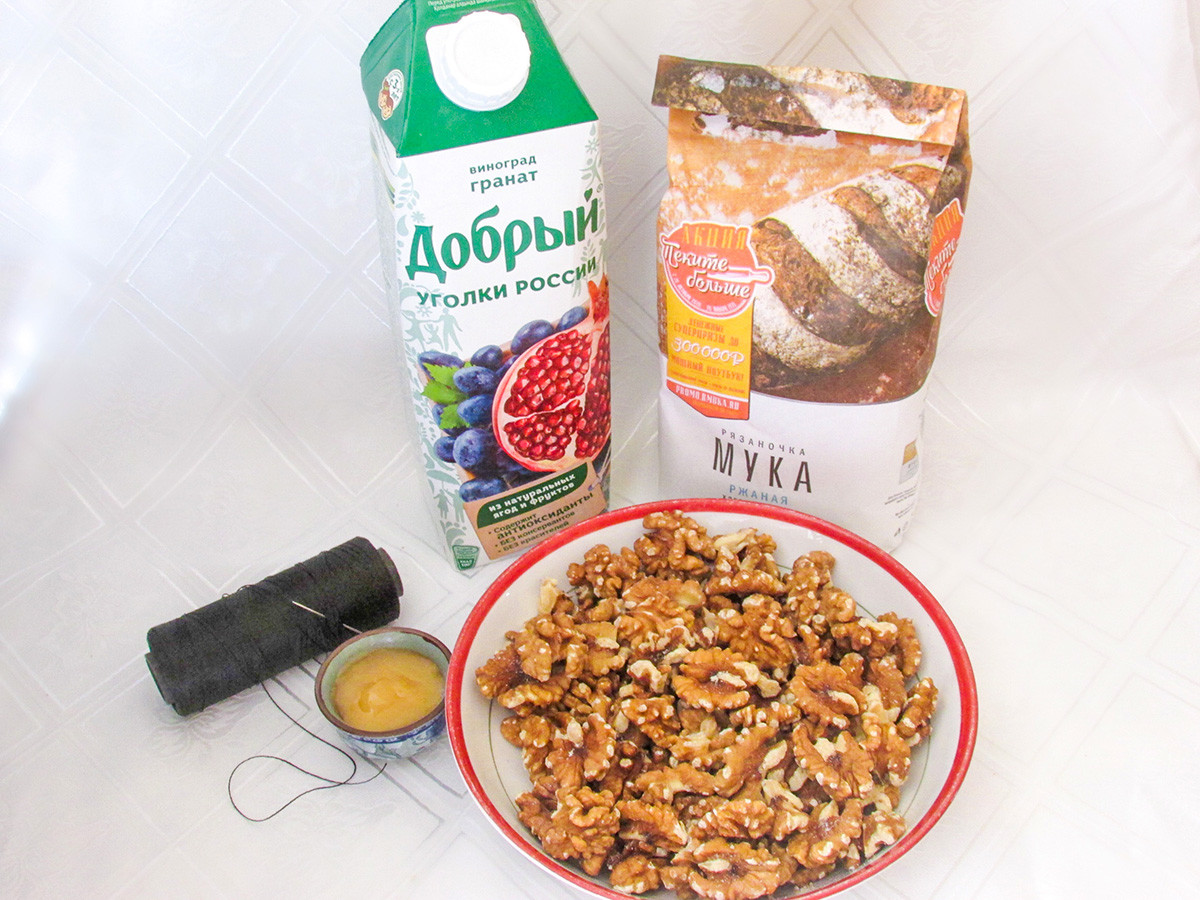 1. First, let’s begin with the dough. Take one glass of juice; (I took a mix of grape and pomegranate juice, but you can choose the one you enjoy most) and mix with flour so there are no lumps inside. 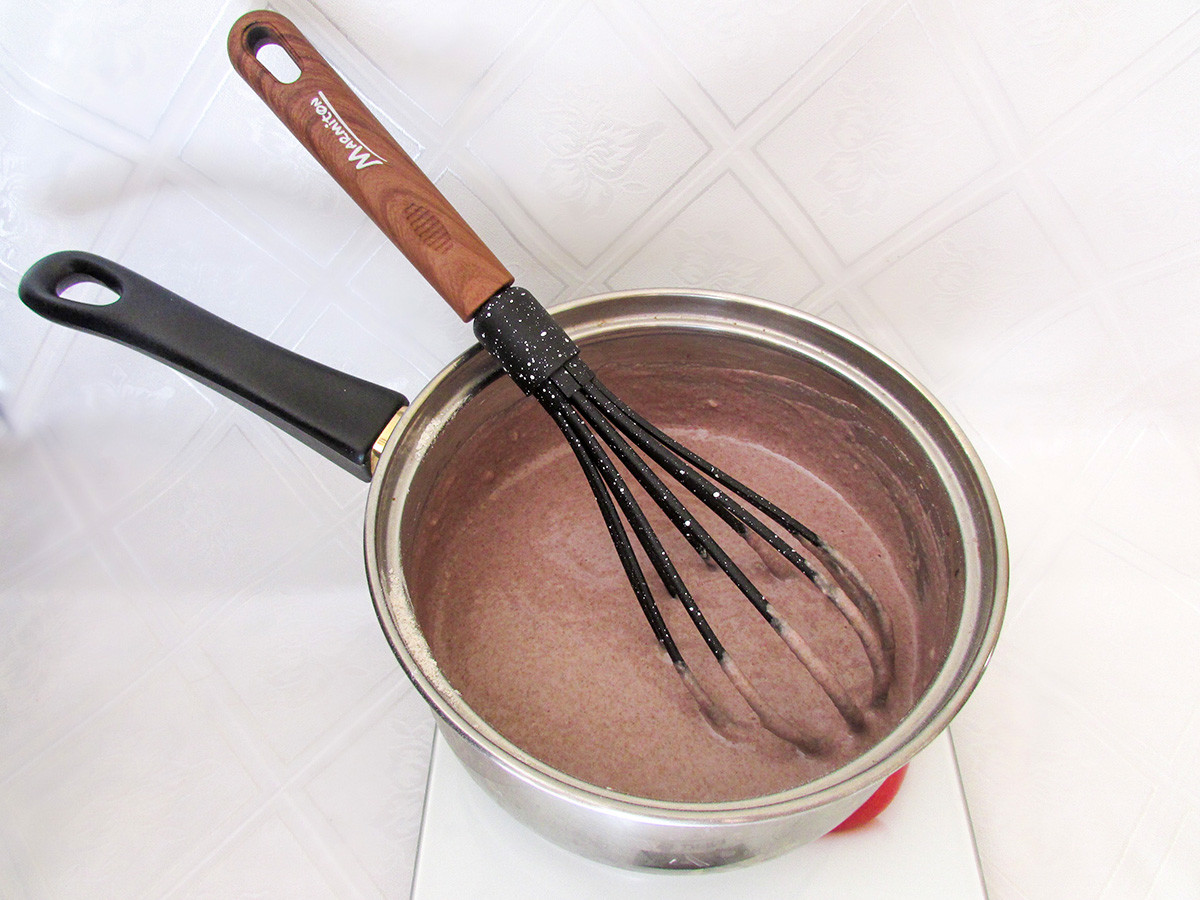 2. Put that mass in a pan on a small flame, constantly and meticulously mix, gradually add the remaining juice. Stir thoroughly. 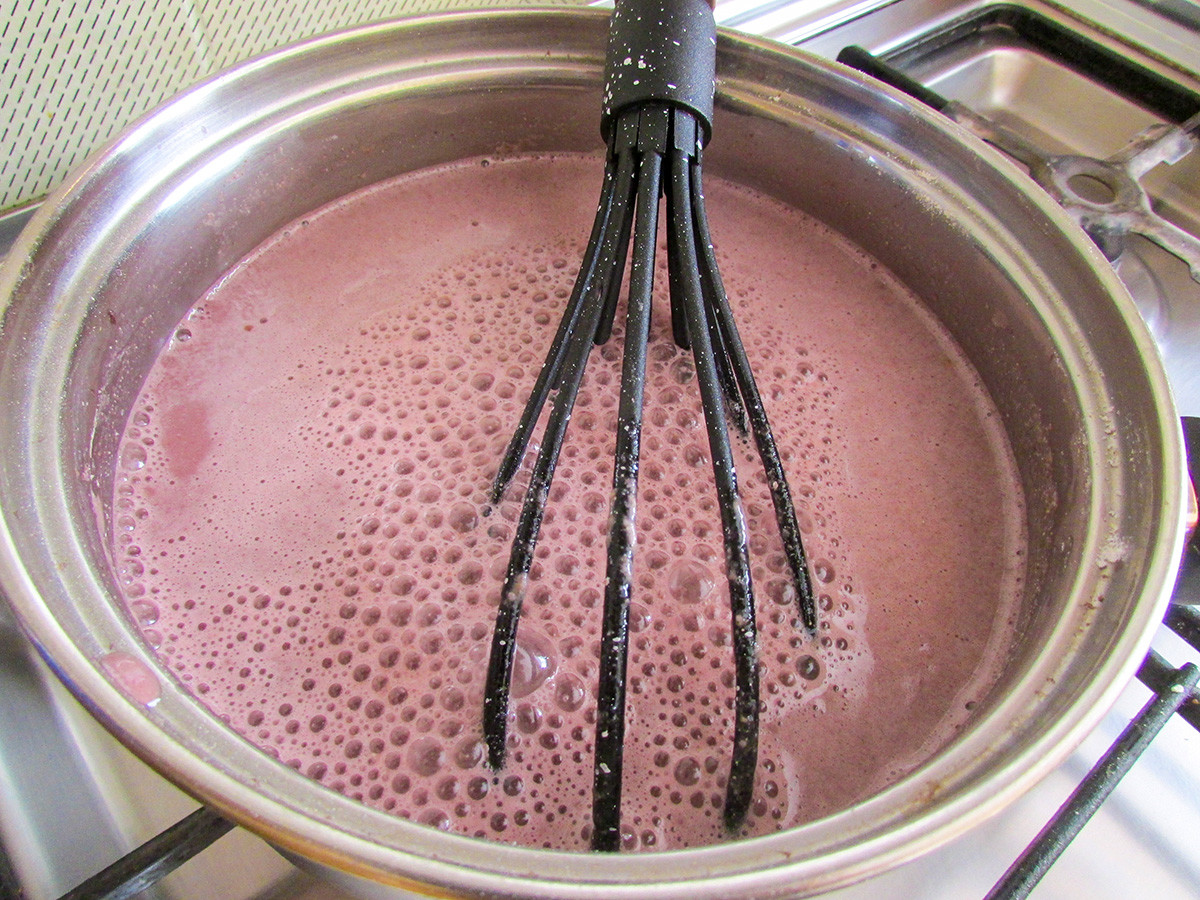 3. When the mass begins to boil, continue vigorously stirring for at least 10 more minutes. During that time, we will bring the mass to a state of thick jelly, but before turning off the heat make sure that it doesn’t taste like flour. As a result we get a thickened mixture that looks like the one in the picture below. It’s called tatara. 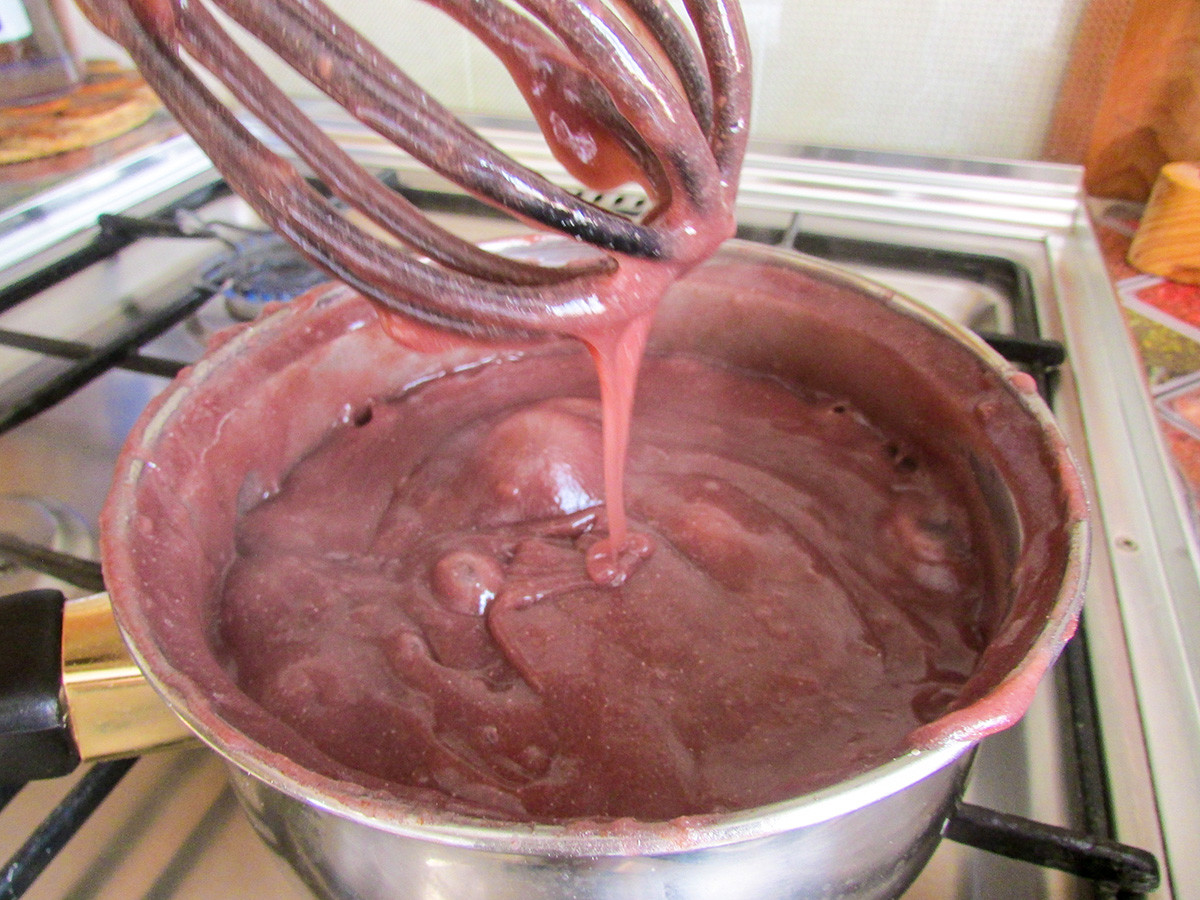 4. Meanwhile, put the nuts on a hot pan and fry on medium heat for 2-3 minutes, stirring continuously with a wooden spoon. Be careful not to burn them. 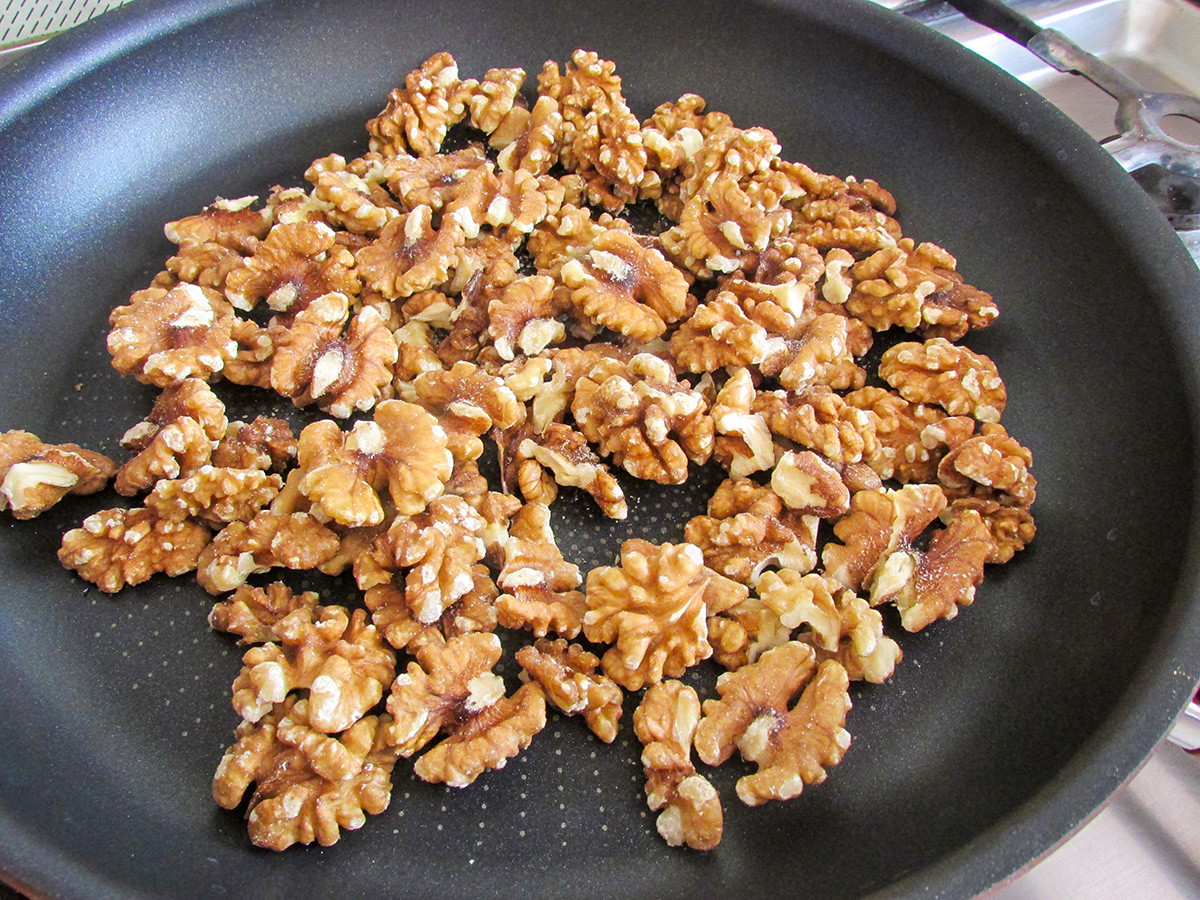 5. While our mixture is cooling, we’ll do the easiest part. Prepare the needle and 40-50 cm length thread. Then thread the necessary amount of walnuts – I threaded about 15 walnut halves and got an ‘icicle’ of about 20-22 cm, because I don’t need the long churchkhela, which would be hard to dry in the oven. You can make any length of icicle you want. 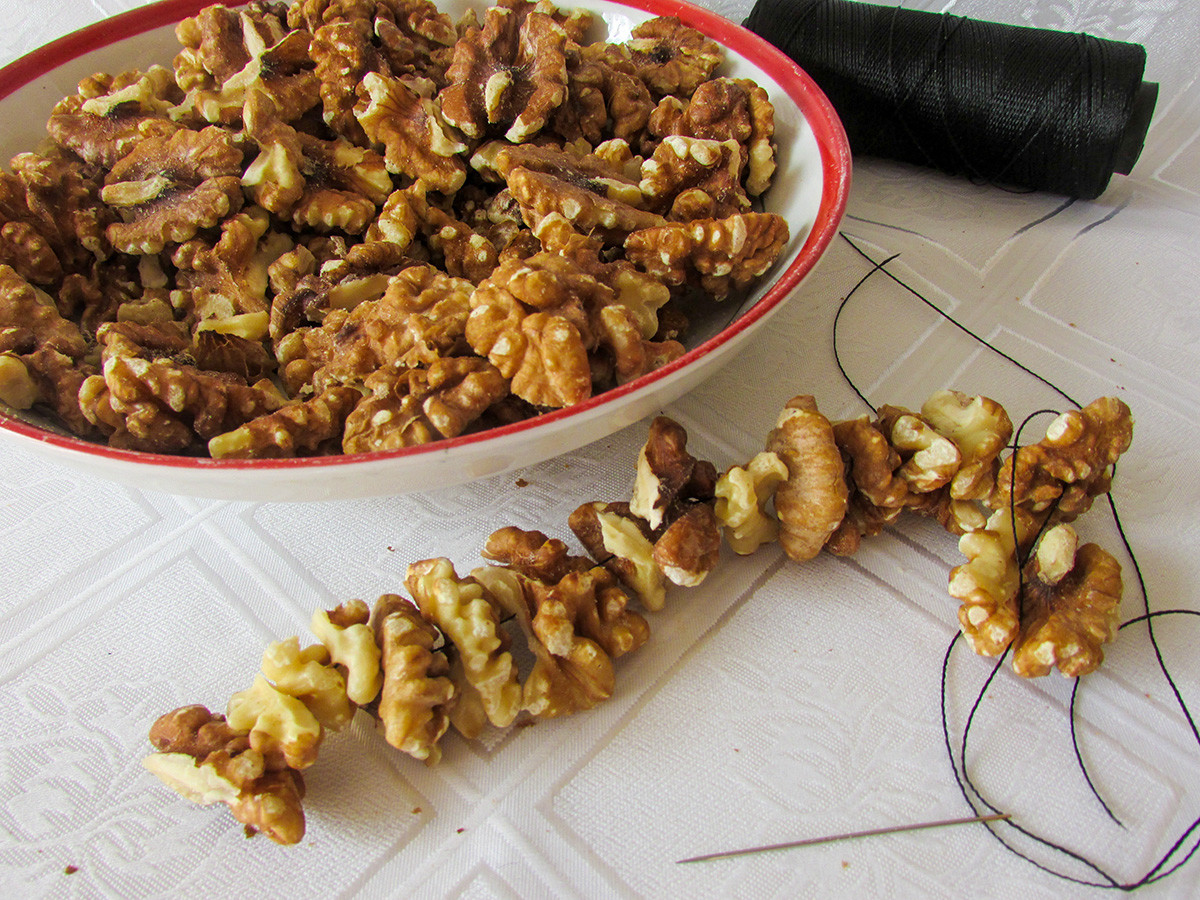 You should get approximately 7-8 walnut strands. If you live in the countryside, leave the walnut strands in the sun for a couple of hours or more to prevent the growth of mold. But if you live in a city like I, then skip this part and move on to the next stage.

6. Now, we’ll carefully bathe the walnut strands in the juicy mass. Cover the threaded mass with tatara and if it’s made right, the churchkhela won’t drip. 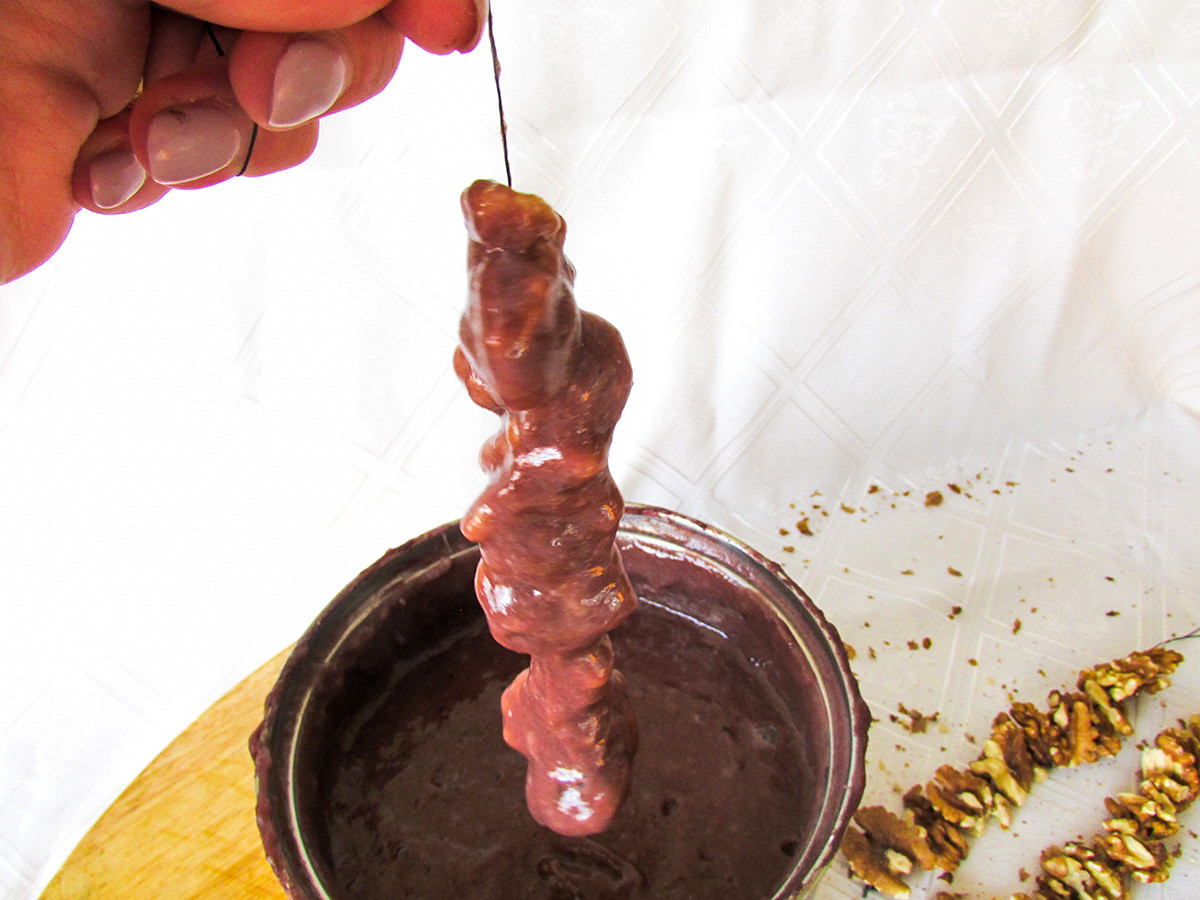 7. Immediately hang each churchkhela after coating. An ideal place is in the space between two chairs or in the oven. I chose the latter, and the result you can see in the photo below. 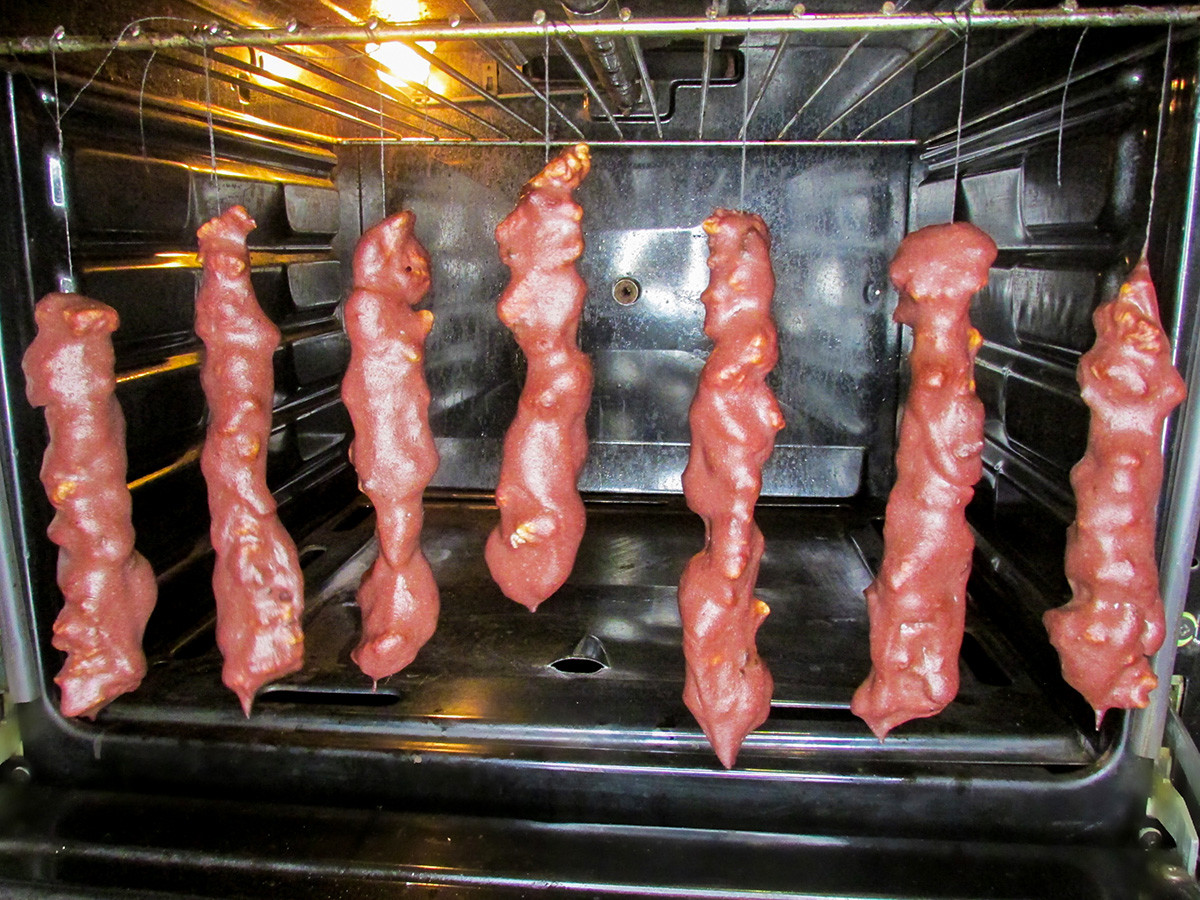 8. Leave churchkhela to dry for a couple of days. It’s ready when the walnut strands are no longer sticky. The churchkhela can be eaten as soon as it dries, but it should be stored in a dark place, wrapped in towels. Enjoy your sweet treat! 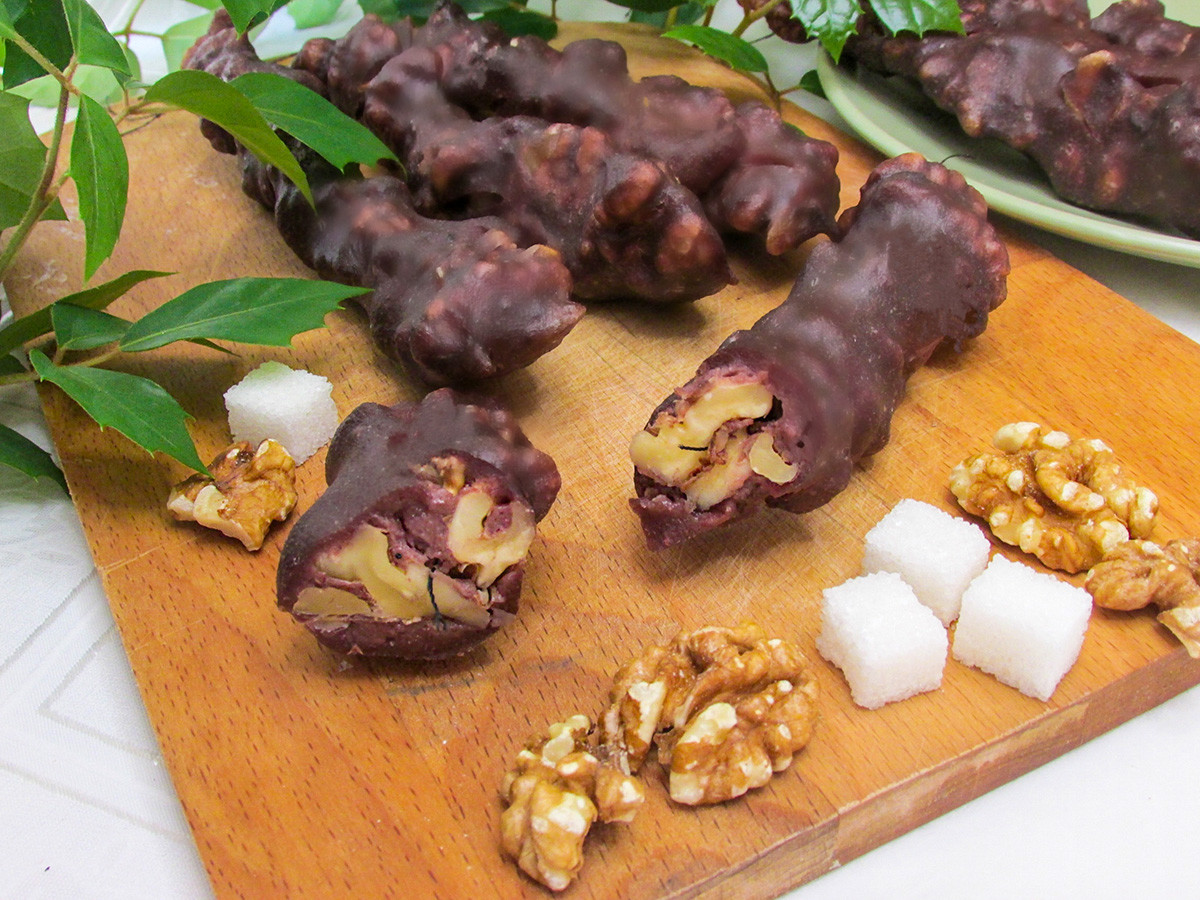