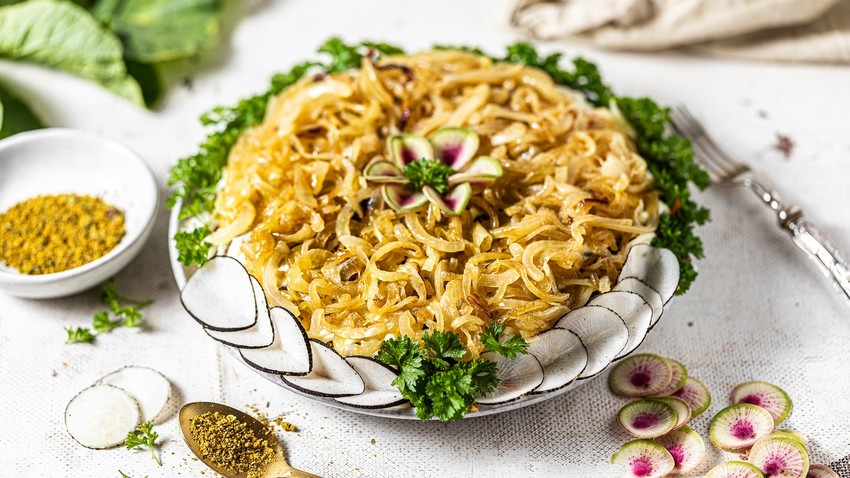 The USSR was an atheistic state, but that didn’t stop restaurants from serving Bishop’s Salad.

Yulia Mulino
What happens when you combine Imperial-era Russian food with Soviet cuisine? Is that even possible? This salad is a good example of the unexpected alliance between two historically distinct culinary cultures.

In the 1970s, in the framework of the "Golden Ring of Russia" tourism project, restaurants in Suzdal in the Vladimir Region (about 180 km east of Moscow) introduced new dishes combining old Russian traditions with modern Soviet cuisine. "Arkhiyereisky" Salad (“Bishop’s” in English) was one of them. You’d be wrong to think that this salad was the favorite dish of clergy just because of its name. The dish most likely takes its name from the Arkhiyereyskiye Palaty (Palace) in the Suzdal Kremlin.

The salad’s main ingredient is a healthy black radish. If you don't find a traditional Russian black radish for "Arhkiyereisky" salad, you can use the green or white ones. I grow this radish in my own garden.

Why couldn’t this Soviet salad be an acceptable food for bishops? The answer is obvious: the premier Soviet ingredients of that era were meat and mayonnaise, and chefs wanted to make the dish rich and festive. These two sumptuous ingredients could not be allowed for clergy.

In my family, this salad became known in the 1990s when my aunt moved into a house in the Vladimir Region. Perhaps you’ve heard about a black radish salad with meat called "Klyazma", from the name of the river flowing in this region. But I’ve always prepared it as "Arkhiyereisky".

When cooking "Arkhiyereisky" salad I give it a twist, with meat. Normally, chopped boiled beef is added as the meat ingredient. Some housewives add chicken or smoked sausage instead. I decided to use minced beef. It is faster than boiling and cutting a big piece of meat. Moreover, the salad’s texture becomes more homogeneous because of the minced meat.

In our family, we use one ingredient which has a significant impact on the taste - the Georgian spice mix "khmeli suneli". Black radish has a strong taste and flavor. The salad already has sweet caramelized onions, which act to lessen the sharp taste. But the addition of khmeli suneli balances the taste even more. 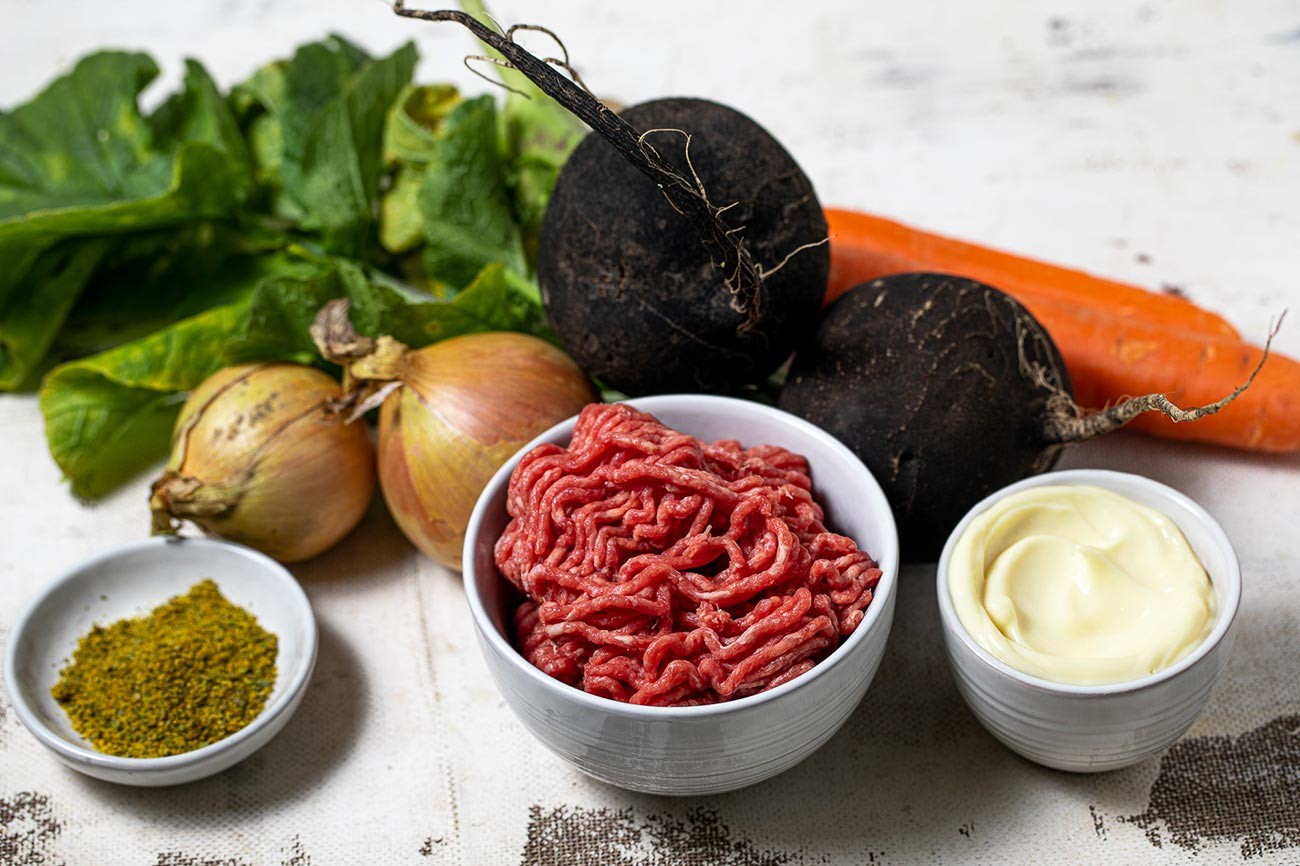 1. Cut onion in half moons and stew adding oil, butter, salt and a bit of khmeli suneli for about 30 minutes. Stir the onions regularly. Put aside to cool. 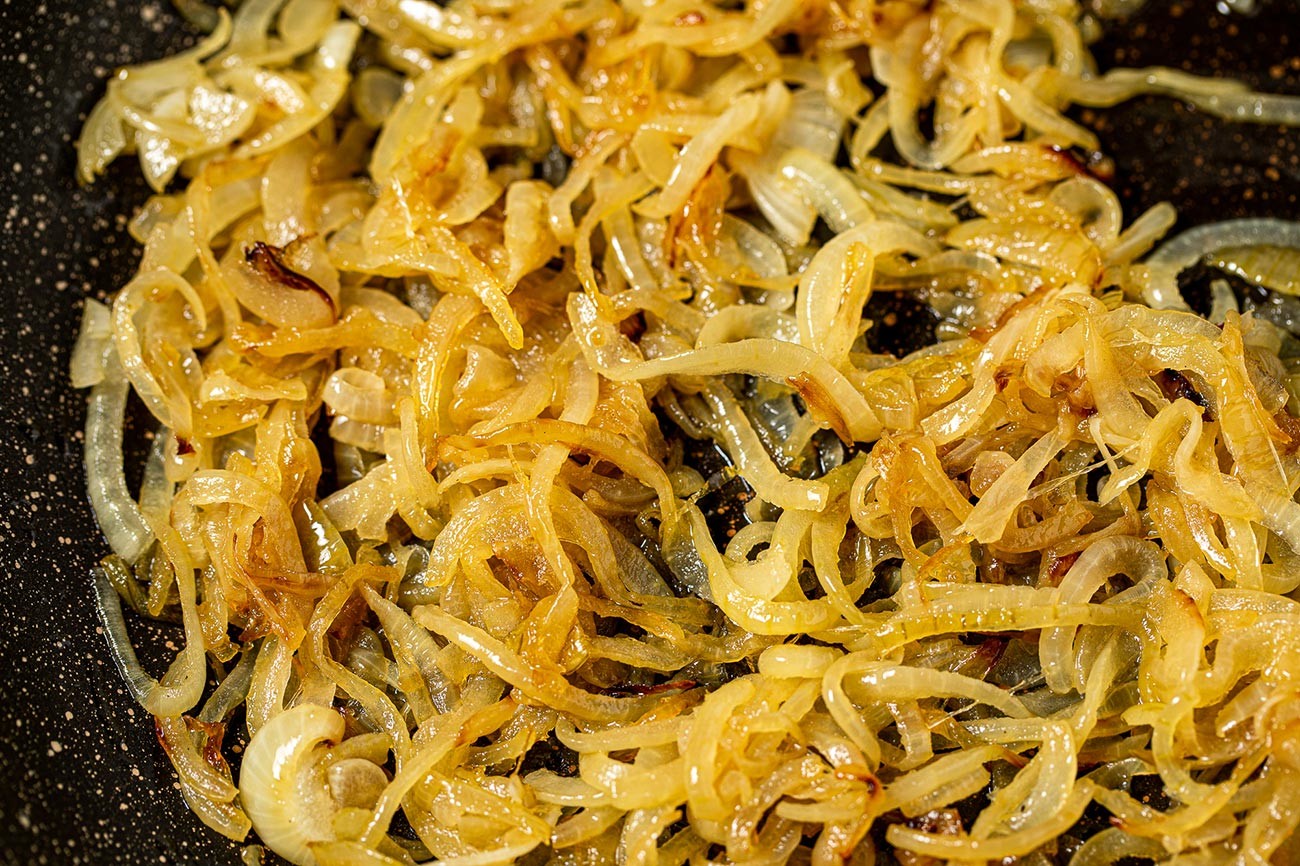 2. Use the same pan to fry meat. Don’t add extra oil. Add a bit of salt and khmeli suneli. When the meat is ready, put aside to cool. 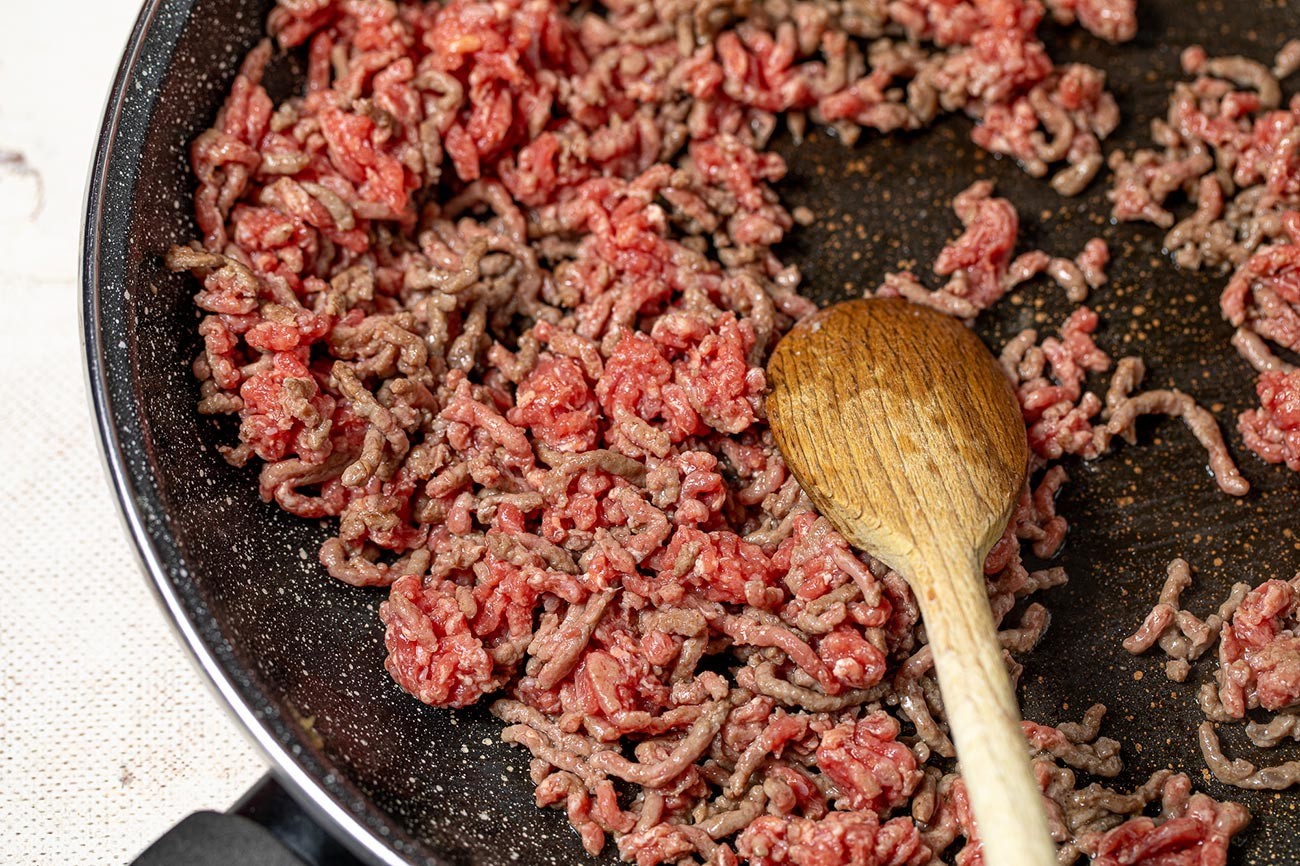 3. Peel the radish and grate. Don’t use a thin grater, otherwise the radish might lose its juice. 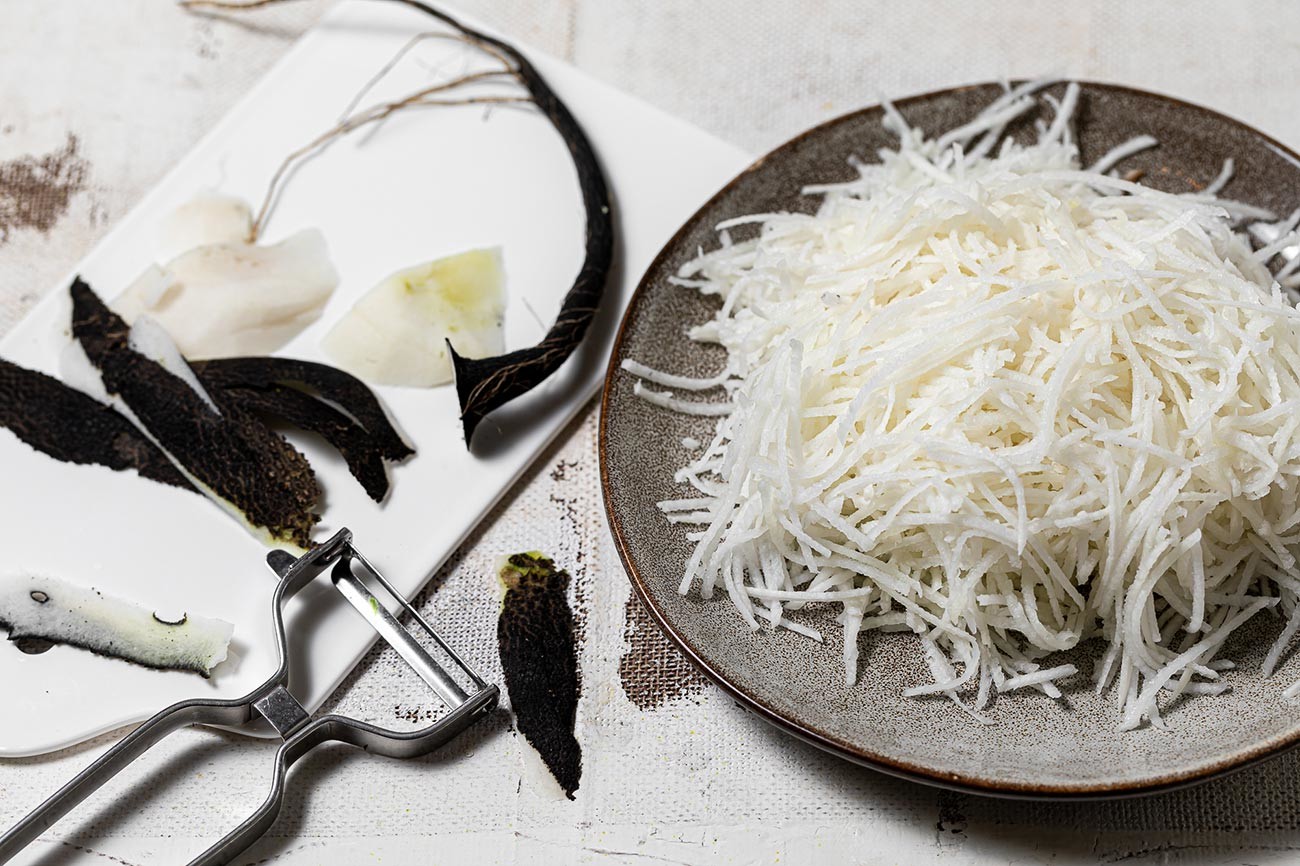 4. Place the grated radish as the first layer; sprinkle a bit of khmeli suneli. 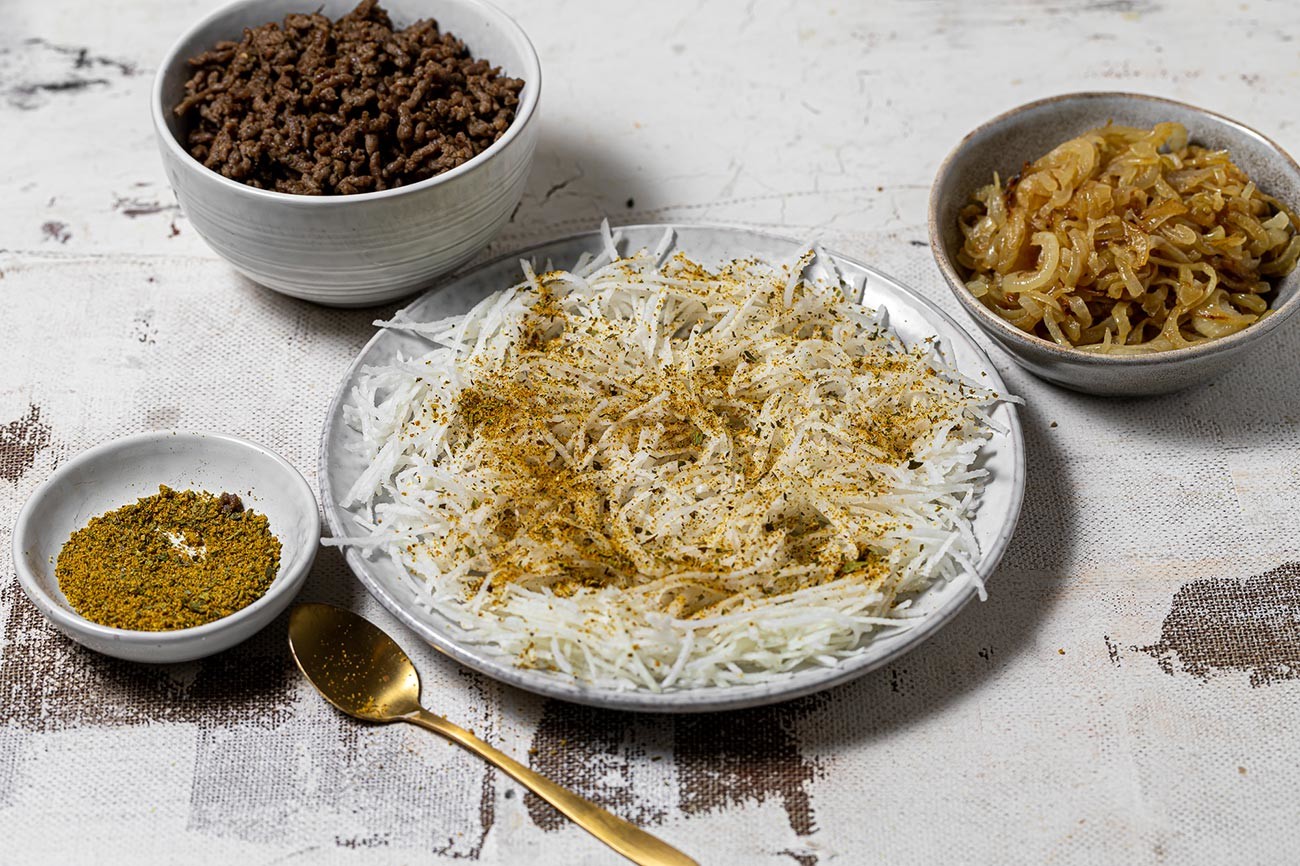 5. Cover it with a thin layer of mayo. I put the mayo in a plastic bag and applied it on top using a small hole. This is the best way I know to control the amount and not to use too much. 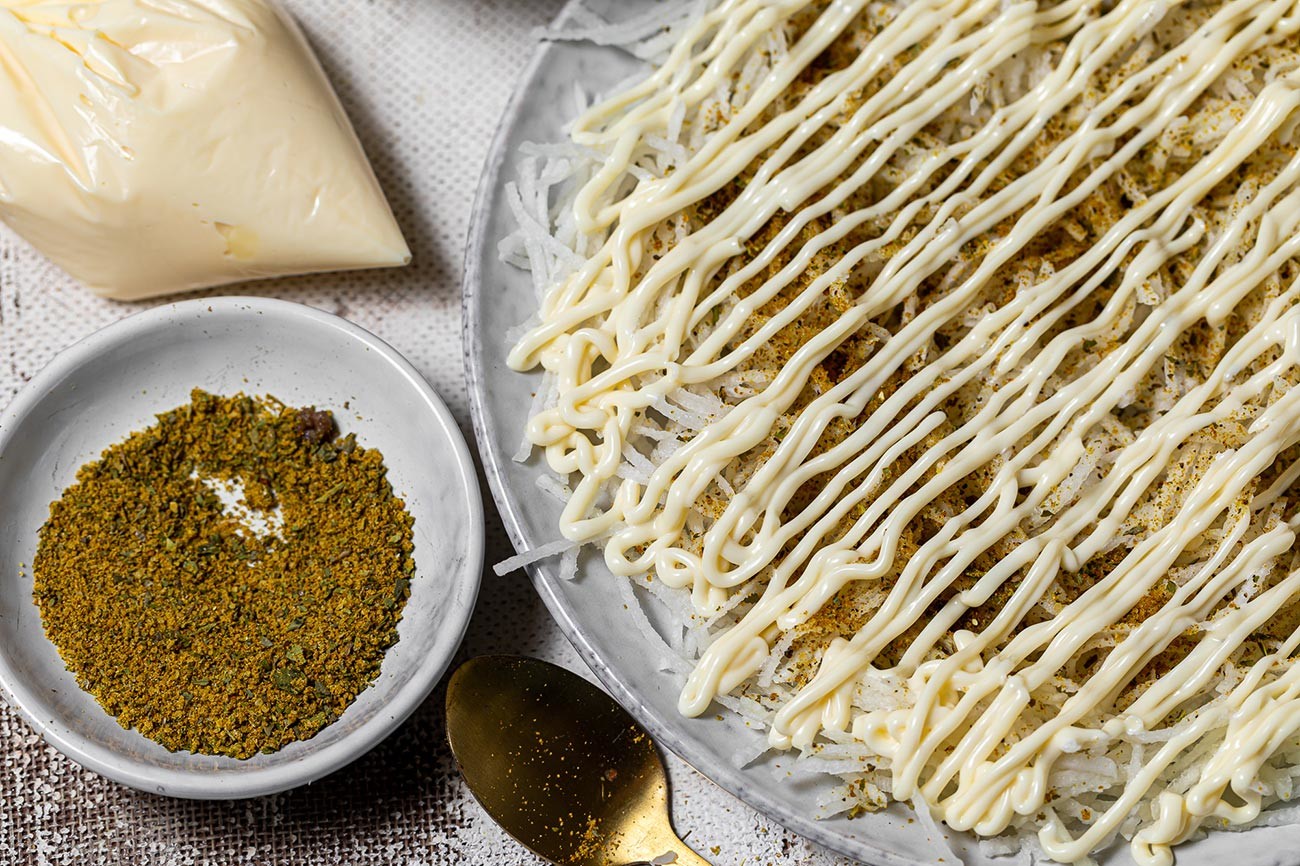 6. Grate the carrots and put as the second layer on top of the radish. Sprinkle a bit of khmeli suneli, cover with a thin layer of mayo. 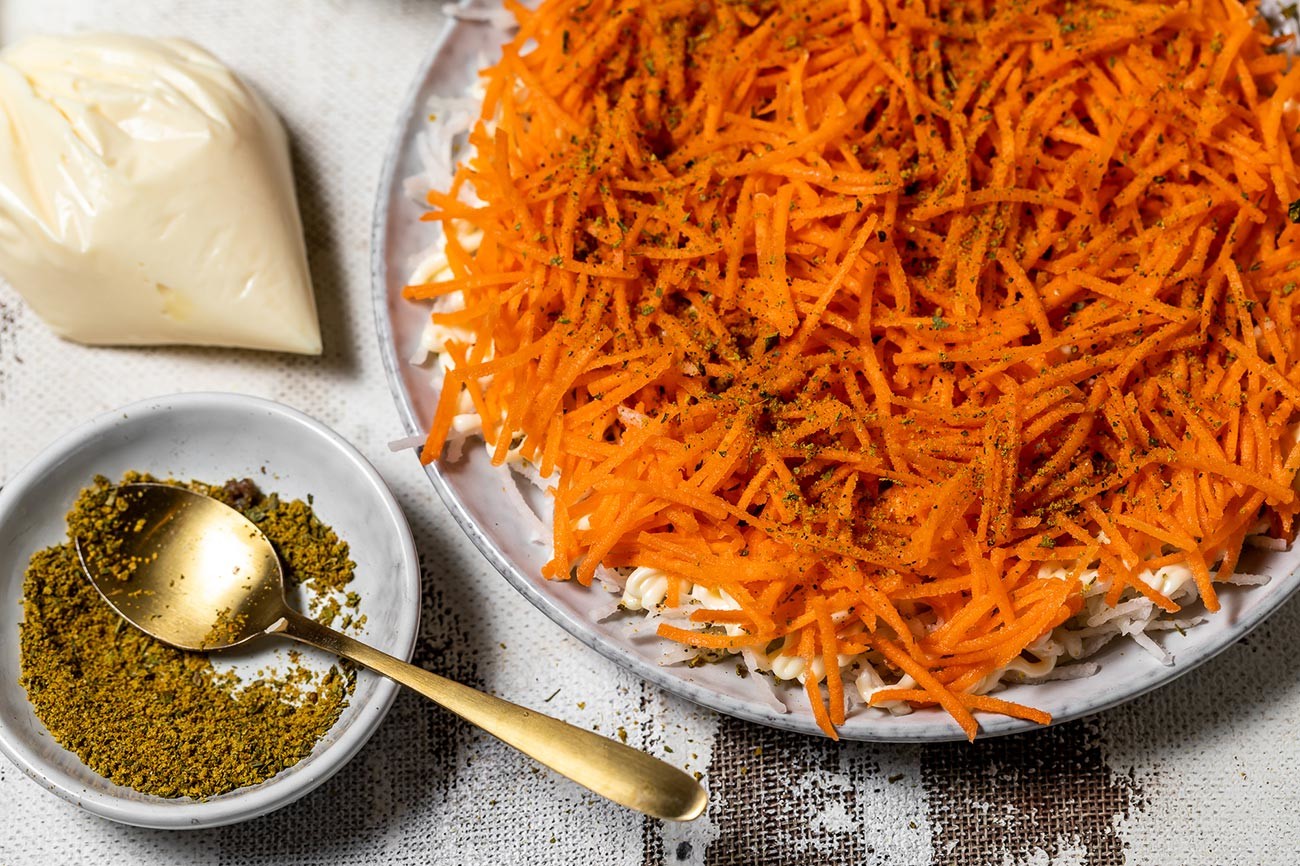 7. Spread meat on top of the carrots and cover with mayo. 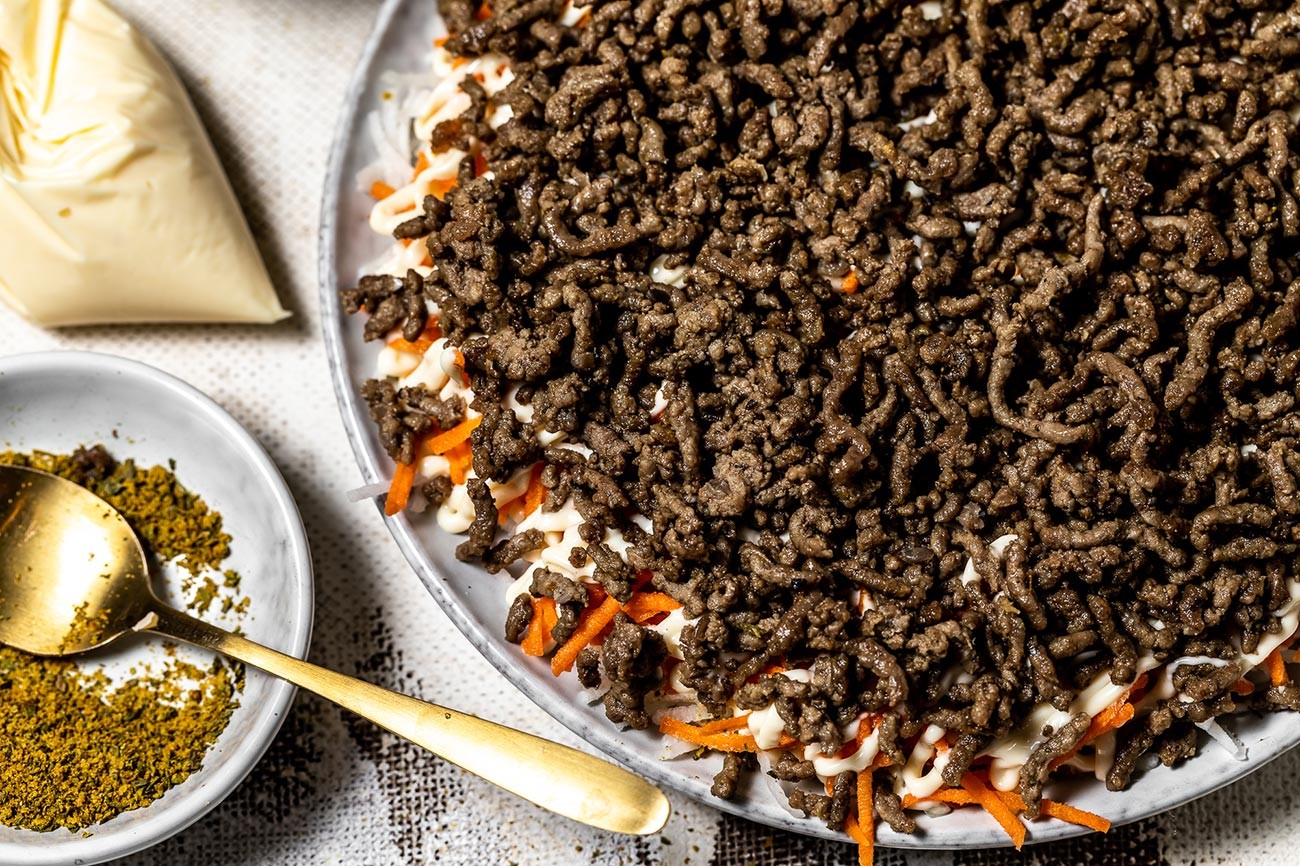 8. Onions are the last layer. 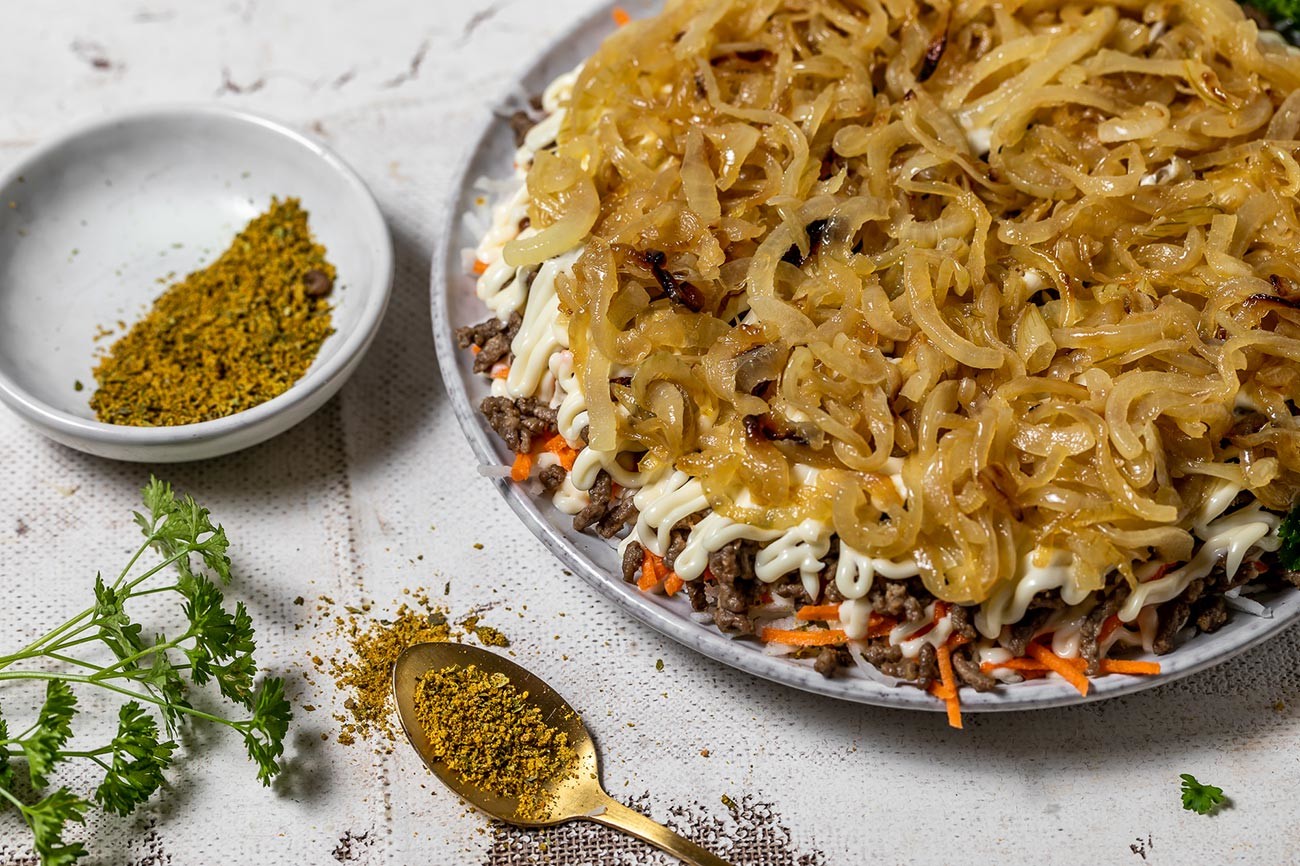 9. I styled the salad as it would be done in Soviet restaurants. 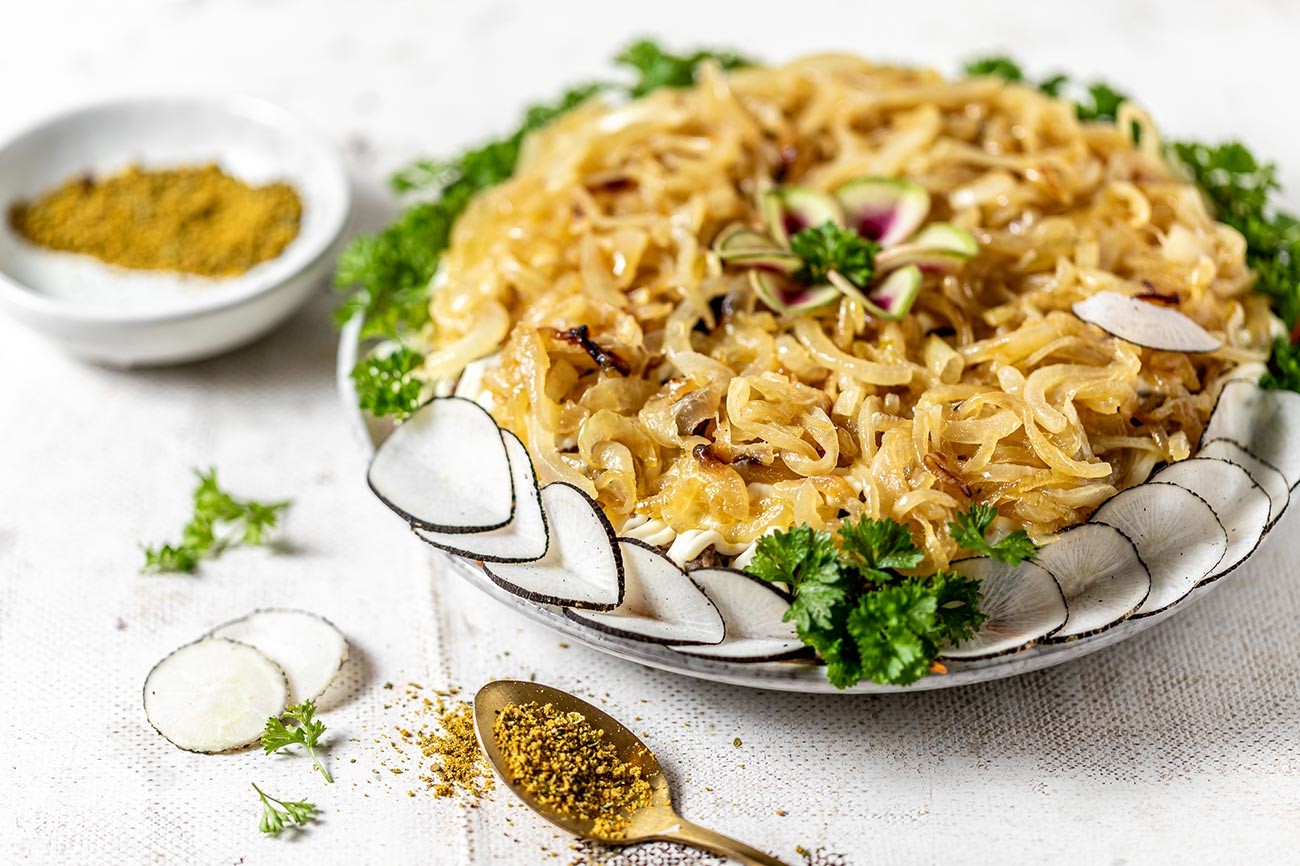 10. Mix all ingredients together in one bowl and form a portion using metal culinary rings. The best garnish is parsley and caramelized onions. Enjoy! 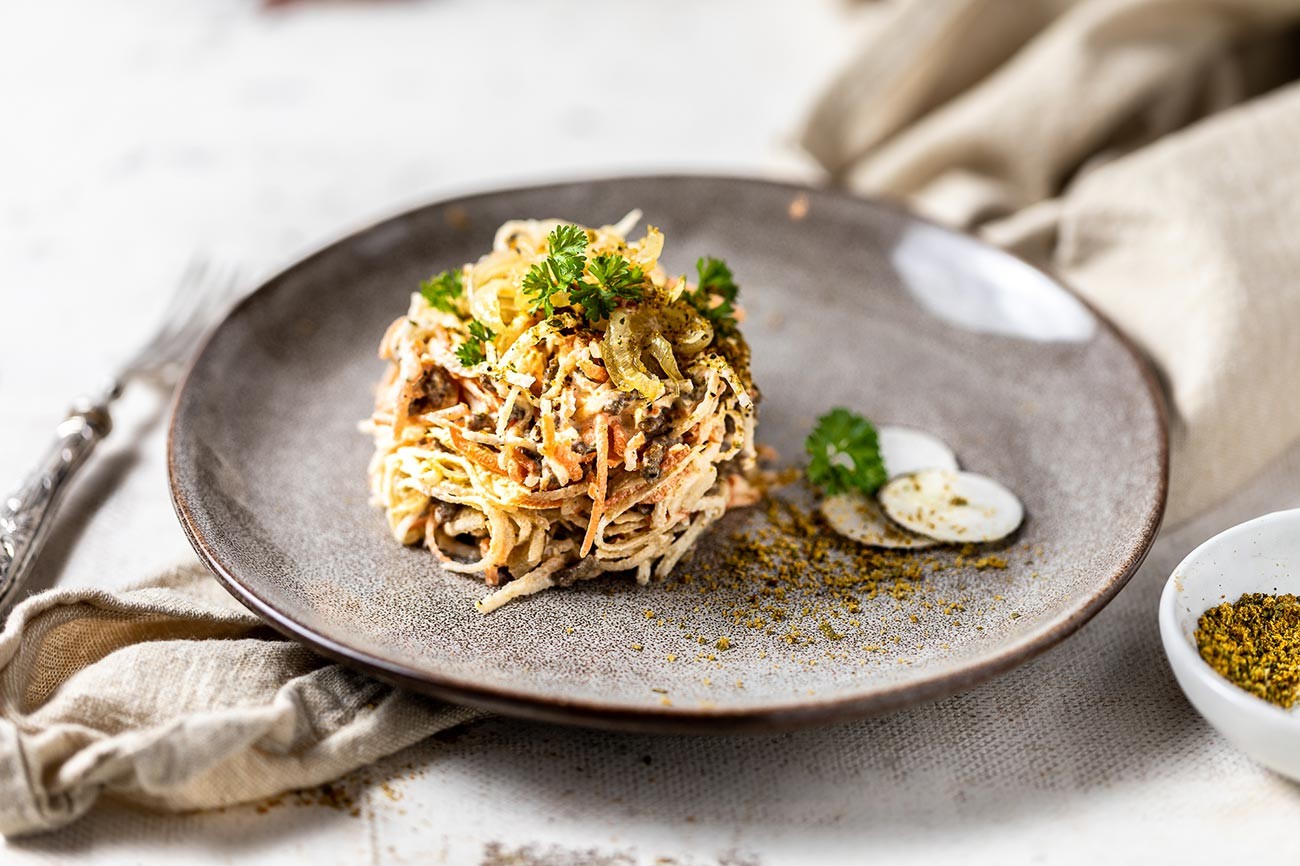 READ MORE: How to make Olivier (aka Russian) salad fit for a tsar (RECIPE)