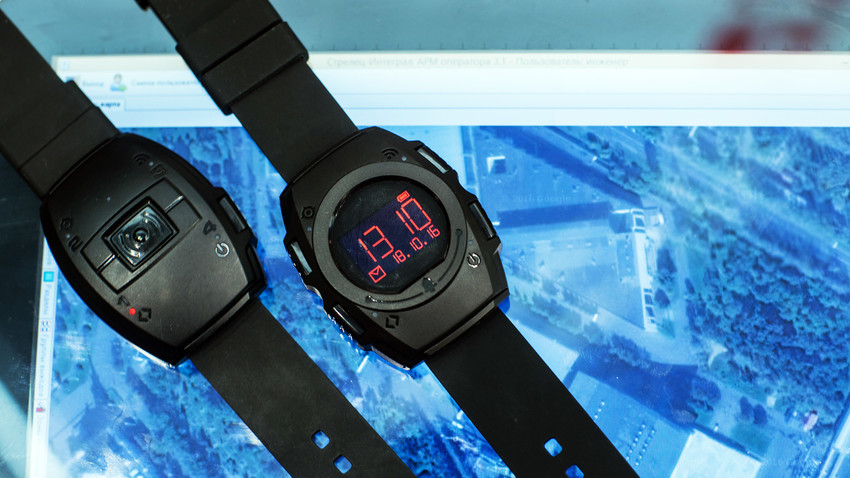 The “Strelets-Chasovoy-1SV” complex at the 2016 Inerpolitech 20th international state security expo in Moscow.

Evgeny Biyatov/RIA Novosti
Communication between soldiers and the central command post is greatly improved by the hi-tech watch, enabling the military to react faster and more efficiently to danger.

A smartwatch can be a fashion accessory, a virtual fitness coach, and apparently a brother-in-arms. During the Zapad-2017 military drills, Russian military police used new smartwatches for guarding army vehicles and hardware. They were first adopted by Russia’s Ministry of Defense in 2015 and are now being handed out to regular troops.

For protection of strategic objects

The “Strelets-Chasovoy-1SV” (“Archer-sentry” in Russian) looks like a normal wristwatch, but it’s also a personal navigation system linked up to the main command post. This means orders can be sent out from one place to soldiers scattered in the field instantly. The watch was designed for the needs of the Russian Army by the St. Petersburg-based Argus Spectr company that develops security systems.

The embedded GLONASS Russian navigation system allows the military command to track the position of each sentry in real time. If danger arises - in the form of an attack or act of saboteur, a sentry can push an alarm button on this smartwatch and alert the command post - at a range of up to 50 km.

If a sentry is immobile or killed and can’t push the alarm button, the Strelets-Chasovoy-1SV starts sending alarm signals automatically. It activates after the bracelet has been removed from the wrist or if the sentry doesn’t move for more than 45 seconds.

As Argus Spectr specialists told Russia Beyond, the watch reacts to a lack of hand movement, but does not detect pulse signals or record the user’s biometric data.

The watch’s ability to operate in low temperatures was highlighted as a major advantage by Russian Defence Minister Sergey Shoigu, who ordered the development of the bracelet’s special “Arctic” version. It’s designed to direct a soldier back to base in case visibility is hampered by a snowstorm.

For the army’s elite

The Russian Airborne Troops are the first to get their hands on the Strelets-Chasovy-1SV, Izvestia military analyst Dmitry Litovkin told Russia Beyond. The elite special forces can use this cutting-edge technology both in sentry and combat activities, he said.

It’s already being used 24 hours a day to protect the Airborne Troops’ hardware in Russia’s Tula and Ivanovo regions, as well as Krasnodar Krai.

Russia’s Ministry of Defense plans to equip all units of the Airborne Troops with the “Strelets Chasovoy-1SV” by 2020.

Year 2032: How will the Russian tank army look like?