Why did Russian scientists want to create mutant ape-humans? 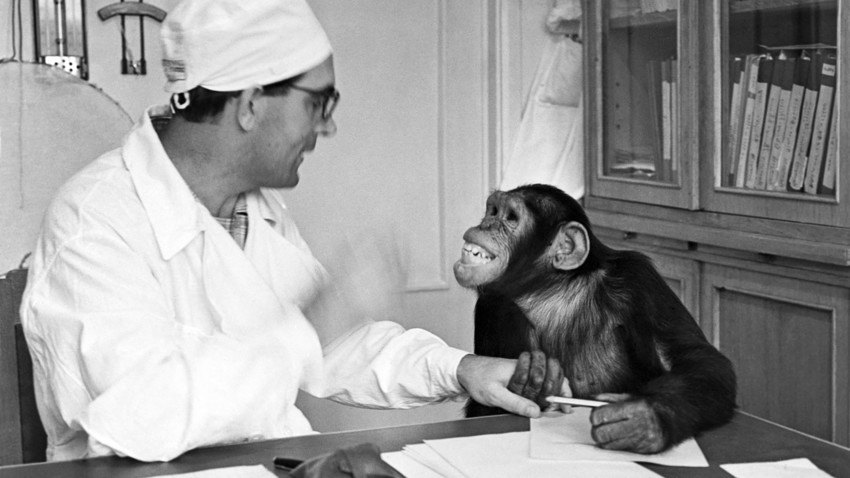 Vasily Yegorov/TASS
Trying to move down the evolutionary ladder a few steps probably isn’t a good idea, but it didn’t stop these daring and innovative Russian scientists. In the early 20th century, biologist Ilya Ivanov planned to crossbreed humans and apes, while Sergey Voronov made fabulous money grafting ape testicles onto wealthy Europeans. Why and how did plans by these men to create an ape-human eventually fail?

In Russia, artificial insemination of cattle began almost 20 years earlier than in the U.S. and Europe, where this type of livestock production was introduced only in the mid-1930s. Ilya Ivanov, a pioneer in this field, received a medical education in Paris, but then returned to Russia to work with the country’s first Nobel laureate, Ivan Pavlov. With funding from the Russian government, by 1914 he used artificial insemination to breed almost 7,000 healthy horses.

The ambitious biologist’s next goal was interspecific breeding. He started with successfully crossbreeding livestock, and soon came to the idea of crossbreeding humans and apes; little surprise that he couldn’t get away with it in Orthodox Russia.

The new Soviet government, however, was eager to use science as a means to denounce religious views, which were still very strong at that time in the minds of the Russian people. 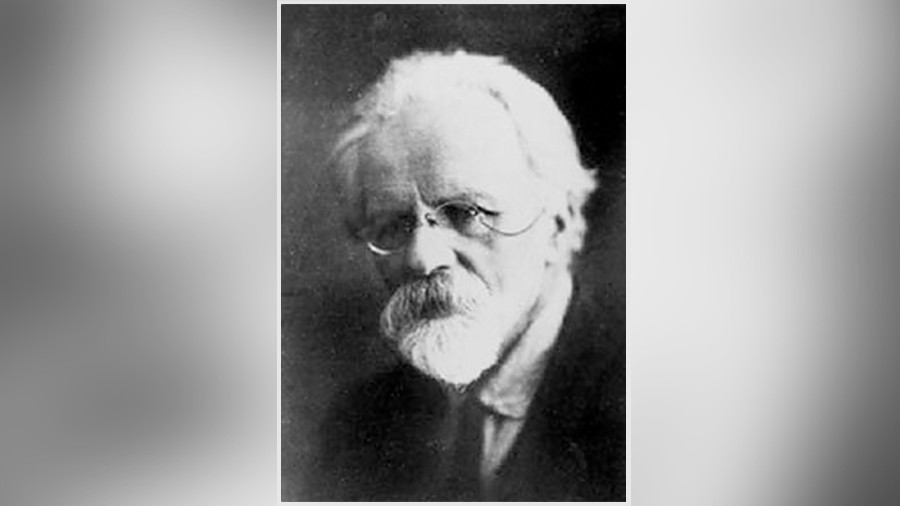 In 1924, Ivanov wrote to Anatoly Lunacharsky, head of the Commissariat for Education, asking to fund his breeding experiments, and he attached letters from the Pasteur Institute, which let Ivanov use chimps from a hatchery in French Guinea. Lunacharsky declined the proposal, but in 1925 Ivanov received help from Nikolay Gorbunov, a high-ranking Soviet official and a former personal secretary to Lenin.

Ivanov was subsequently given $10,000, and articles about his projects were published in the Soviet press. Obviously, the researcher had no moral qualms. He just wanted to be in the textbooks as creator of a new race.

In 1926, Ivanov started inseminating apes in Guinea with semen taken from local humans. However, Ivanov also wanted to inseminate African women with ape semen, without their consent, which was firmly refused by the French administration. The French subsequently helped Ivanov to ship the apes to Sukhumi, Georgia, where another experimental animal breeding farm was built.

Back home, the Soviet Academy of Sciences condemned Ivanov’s experiments on African women as immoral. By then, all the female apes brought from Africa had died, and none were pregnant; only one male orangutan remained. Nevertheless, Ivanov pressed on, and he wanted to find at least five female volunteers to be inseminated using an orangutan’s semen.

Surprisingly, Ivanov even received a letter from a woman in Leningrad who wanted to participate in the experiment, but then the orangutan died. Plans to start the breeding of hominid mutants in Sukhumi were set on hold.

Even more, Ivanov’s patron, Nikolai Gorbunov, was condemned during Stalin’s purges, which hastened Ivanov’s downfall. Arrested in 1930, he was sentenced to five-year exile in Kazakhstan, from which he never returned.

'If you're too old for dancing, get yourself a monkey gland'

This line from the song, “Monkey-Doodle-Doo,” by Irving Berlin refers to real monkey testicle transplants carried out by the Russian-born French surgeon Sergey Voronov. 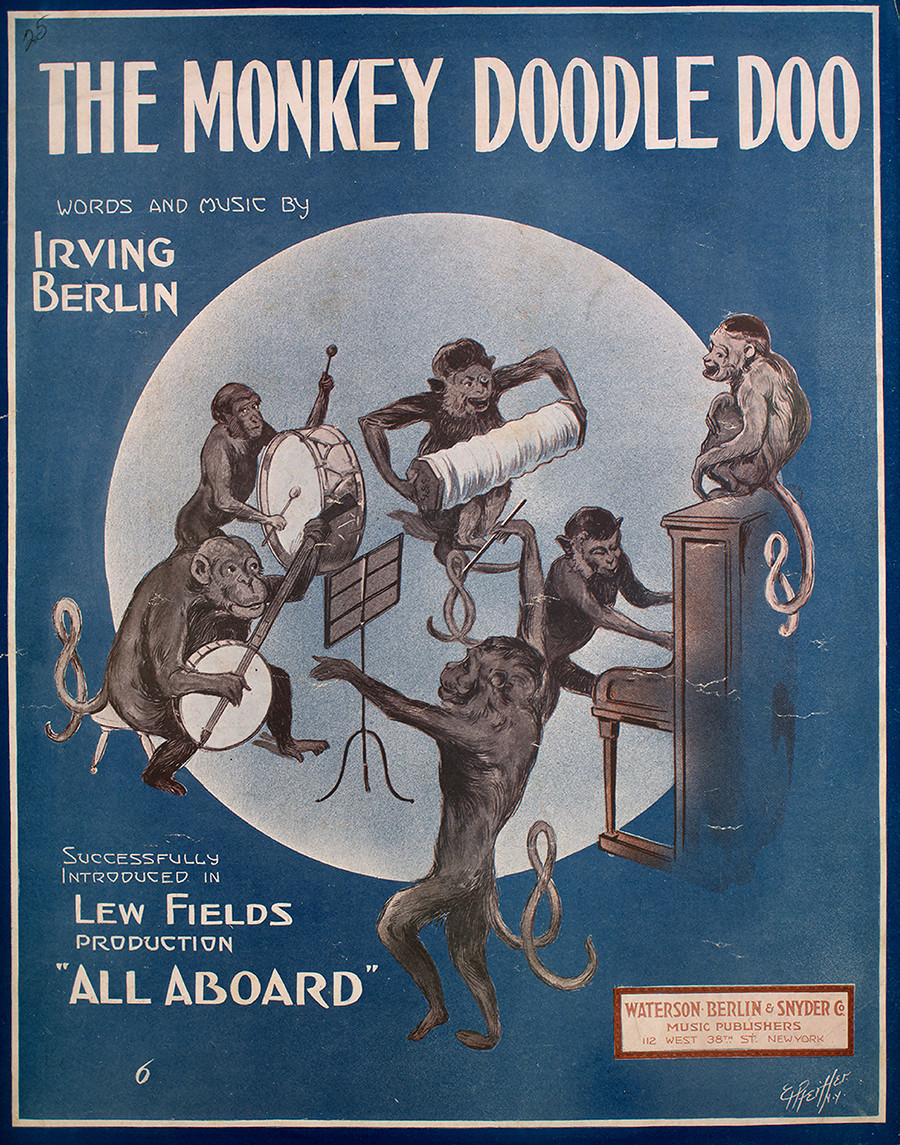 Voronov is believed to be the inspiration for the main character, Professor Preobrazhensky, in the novel, Heart Of a Dog, by Russian writer Mikhail Bulgakov. In fact, the novel mentions that the professor transplanted ape testicles to humans; which is exactly what Voronov did.

Like Ivanov, Voronov studied in France under the supervision of Nobel laureate Alexis Carrel.  A master surgeon, for 14 years he served as personal physician to the leader of Egypt. There, he researched the consequences of castration on royal eunuchs.

He noticed that boys whose gonads were removed at the age of six were sluggish and inert, and they had troubles with memory and aged fast. This lead Voronov to believe that gonads were the main organ responsible for vigor and intellect in animals and humans alike.

Using his superior surgical skills, Voronov started with transplanting the gonads of young goats and rams to old ones. In 1914, Voronov carried out the first transplantation of a thyroid gland from an ape to a 14-year old mentally retarded boy, and said the operation drastically improved his mental health.

In 1920, Voronov was the first to transplant testicle tissue from a chimpanzee to a human scrotum, and the patient reported increase in vigor, better memory and stamina. 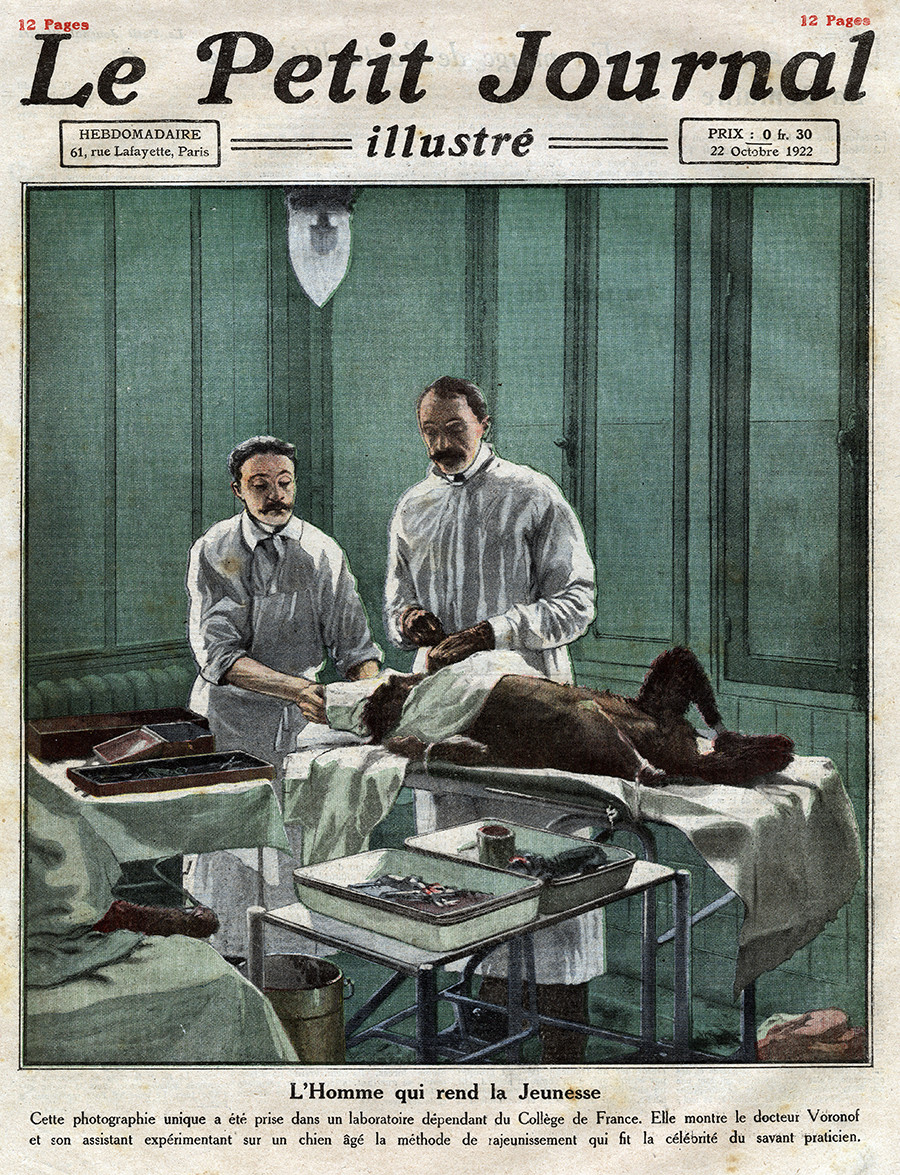 French surgeon of Russian extraction Serge Abrahamovitch Voronoff (1866-1951) and his assistant operating on an old dog, according to his method of rejuvenation by grafting, in a laboratory at the College de France, Frontpage of French newspaper Le Petit Journal Illustre, October 22, 1922.

During the 1920s and 1930s, over 500 men in France alone had tissue from ape testicles added to their own. Among Voronov’s clients were businessman Harold McCormick, Turkish President Mustafa Atatürk, and French Prime Minister Georges Clemenceau.

Dubbed “Doctor Youth,” Voronov became very rich, and surrounded himself with servants and fiancees. A prolific writer, he popularized his activity in numerous books with titles such as, From Cretin to Genius.

Soon, however, Voronov’s experiments were denounced by the European medical community. After a few years, many of his patients didn’t notice any effects after the operation. In the 1940s, Kenneth Walker, a British philosopher and urologist, labelled Voronov’s operations “medical monkey business.”

During World War II, German troops ravaged his castle on the French Riviera, and Voronov fled to the U.S. He died in Lausanne in total oblivion in 1951.

Recently, however, Voronov’s practices have been studied by anti-aging specialists, who are interested in human hormone replacement. Luckily, this time they’re not using ape testicles.