This robot could be the future of Russian space exploration 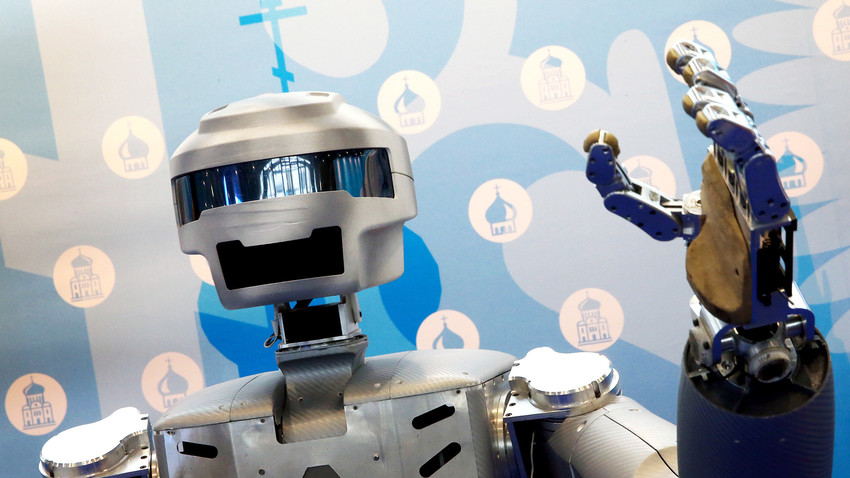 Stanislav Krasilnikov/TASS
He loves sport, Twitter, and spacecraft. Sounds harmless enough, but he also shoots with both hands while doing the splits.

“Hey guys, I’m Skybot F-850. But you can call me Fedor. Now I’m getting to grips with the controls of the Soyuz MS-14 spacecraft, on which I’m planning to fly to the #ISS on August 22, 2019,” Fedor posted his first tweet immediately after arriving at the Baikonur Cosmodrome, where he is now undergoing essential testing and training.

If you’ve seen the movie Avatar, then you’ll understand how Fedor operates. He's a similar sort of avatar, only stripped down. No blue skin or long tail. Outwardly, he looks more like Robocop, and his movements are controlled by a person in a special suit.

The name "Fedor" should actually be written as FEDOR, since it's an acronym (Final Experimental Demonstration Object Research), but "Fedor" looks more human (and Russian). Back in 2014, the Russian Foundation for Advanced Research Projects (FARP) set about creating Fedor together with the Research and production Association Androidnaya Tekhnika at the request of the Russian Ministry for Emergency Situations. The robot was initially conceived as a rescue worker for pulling out victims trapped under rubble.

Fedor was unveiled to the world in October 2016. Back then, Roscosmos head Dmitry Rogozin published a video highlighting Fedor’s capabilities, saying that the robot could become not just a rescue worker, but a “cosmonaut assistant.”

In the video, Fyodor performs some basic human actions – he walks, does press-ups on his fists, handles a drill (no worse than in the “Satisfaction” music video), drives a car, and crawls on his stomach. He can also lift loads weighing up to 10 kg and (slightly less human-like) transmit video and audio signals.

His creators do not beat him with hockey sticks (as happens at Boston Dynamics), but he is forced to overcome obstacles. This is to develop his vestibular system, so that he can stay on his feet in any conditions.

In 2017, the engineering team gave him some "stretching" exercises, and soon he was the first robot in the world able to do the splits, both lengthwise and crosswise, a FARP spokesperson told RIA Novosti.

It wasn’t long before he mastered the Lara Croft-type skill of shooting with both hands simultaneously, and his manual dexterity continues to advance apace.

However, as soon as word spread to the project’s foreign partners, they immediately stopped supplying components, Evgeny Dudorov, executive director of Androidnaya Tekhnika, said in an interview with RIA Novosti.

Imagine a robot doing the splits and shooting with both hands – that’s enough to scare off anyone. So in 2018, it became a purely Russian development, Dudorov says.

Fedor’s round-trip to the ISS, together with a human crew, will last until September 7. In preparation for the flight, he has been fitted with voice capability and been slightly reduced in size so as to fit inside the capsule.

Fedor’s precise mission is not known, but all will be revealed, hopefully, via his Twitter feed. What is known is that the cosmonauts plan to evaluate how Fedor behaves when weightless – after all, he will be the first robot avatar on board the ISS.

Alas, there are no plans for Fedor to do a spacewalk during his first flight, but these tasks are set to be robotized in future, says the head of the Russian Cosmonaut Training Center, Pavel Vlasov.

“Given that the ISS surface is about the size of a soccer field, moving around out there is not easy and slow-going. That provides various potential applications for robots,” he explains.

Next stop, the Moon

Assuming he survives intact, on subsequent flights Fedor will be doing spacewalks controlled from Earth – that much is certain.

If everything goes smoothly, Fedor will be the first tester of the new Russian spacecraft Federation, which is set to be launched in 2022 aboard the Soyuz-5 vehicle from the Baikonur Cosmodrome.

Fedor could even be sent on a flyby of the Moon aboard Federation in advance of manned lunar missions by Russian cosmonauts, Dmitry Rogozin announced.

“There is likely to be a preliminary stage involving a humanoid robot. Humans will then be sent when we understand all the risks and know how to neutralize them,” said Rogozin.