Moon diaries: What is the lunar orbital home in Moscow like?

How difficult is it to live in a metal container that mimics an orbital space station for four months? It wasn't too bad at all, as it turns out.

For residents of the metropolis, our station would seem like a real palace. The ground-based experimental complex (known by its Russian acronym of NEK) is located at the Institute of Biomedical Problems (IBMP) in Moscow, which since the 1960s has conducted simulated spaceflights and studied the physiological and psychological effects of extreme conditions on humans.

The place where we lived and worked for four months - NEK - is a unique facility that replicates a sealed space station. It consists of five modules, four of which are numbered according to their volume in cubic meters (EU-50, EU-100, EU-150, EU-250 and a hangar). The interior is finished in natural wood, but it is unlikely you will find such luxury on a real space station. 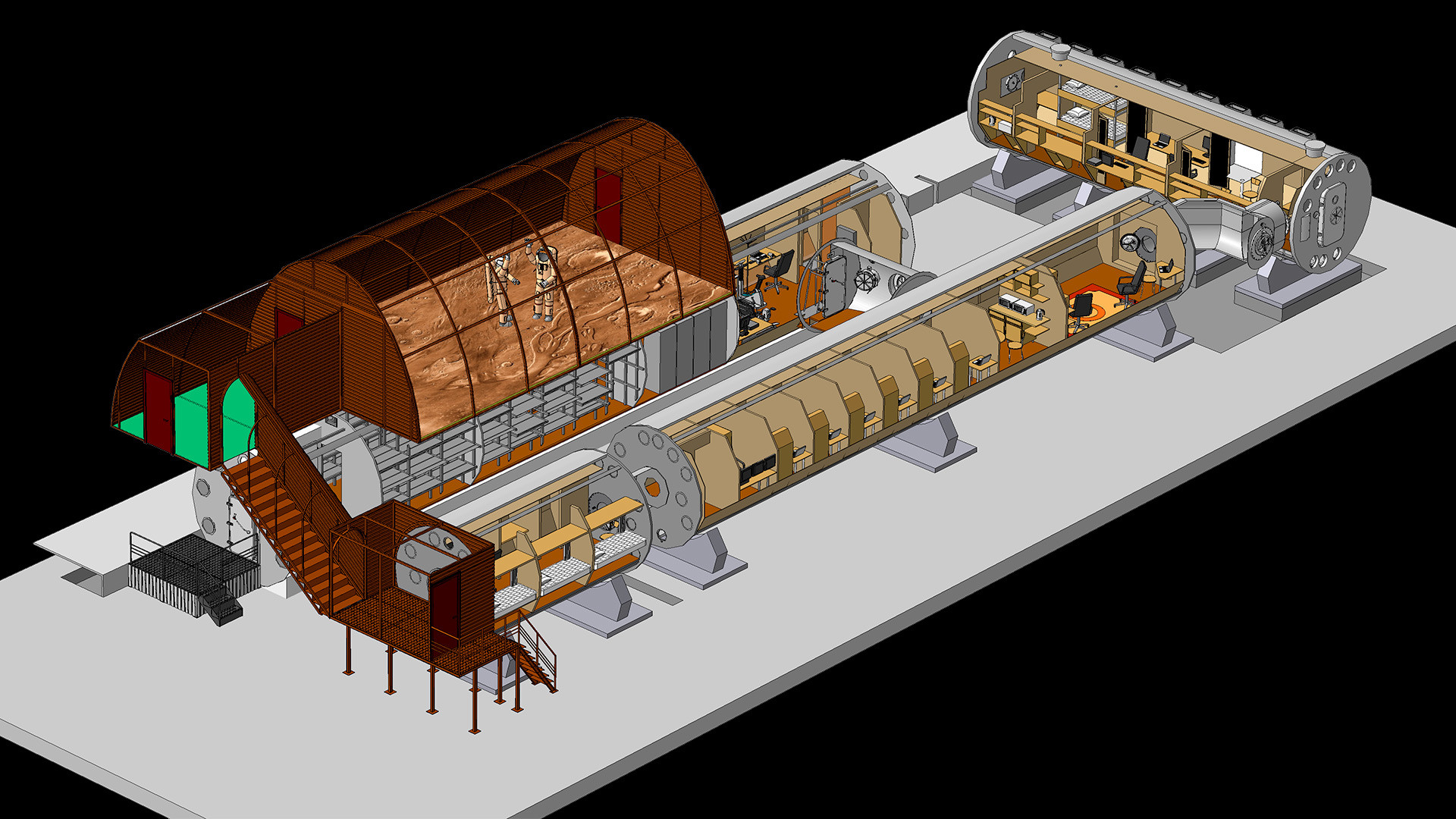 That is a shame, perhaps: wood doesn't emit toxins, it is ecologically safe for humans and also has a beneficial effect on the emotional state of members of the experimental crew (at least that is what psychologists believe, and I agree with them). The atmosphere inside the station is maintained at a three per cent pressure increase, so that dust and microbes do not penetrate from the outside.

Let's take a walk through the modules

The station's heart is a 150 cubic meter residential module connecting to the other modules. There are six cabins, a kitchen/dining room, a space for the operations console, a community room and a lavatory. 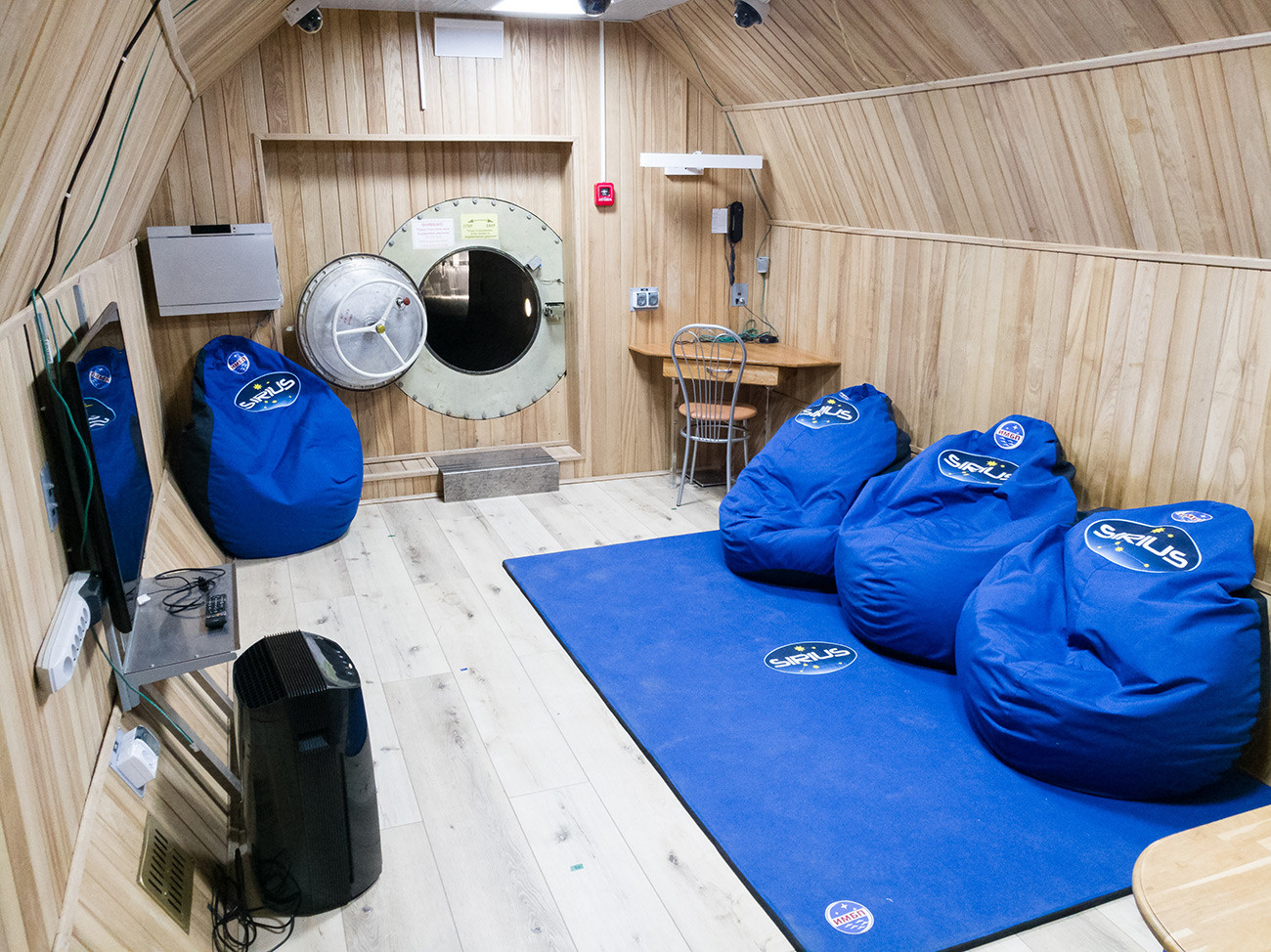 The operations console includes equipment for communicating with Mission Control Center (MCC) and monitors that display data on the station's life support system. Several times a day we check the level of carbon dioxide and temperature, and make sure that the cleaning systems and filters are in order.

We get together in the community room for two purposes:

1) Three times a day before every meal we all adopt a plank position on a big comfortable blue mat to the accompaniment of music, and maintain it for some time.

2) When we finish work in the evening, we sit down on big blue beanbag chairs and watch films and TV series with a space theme. 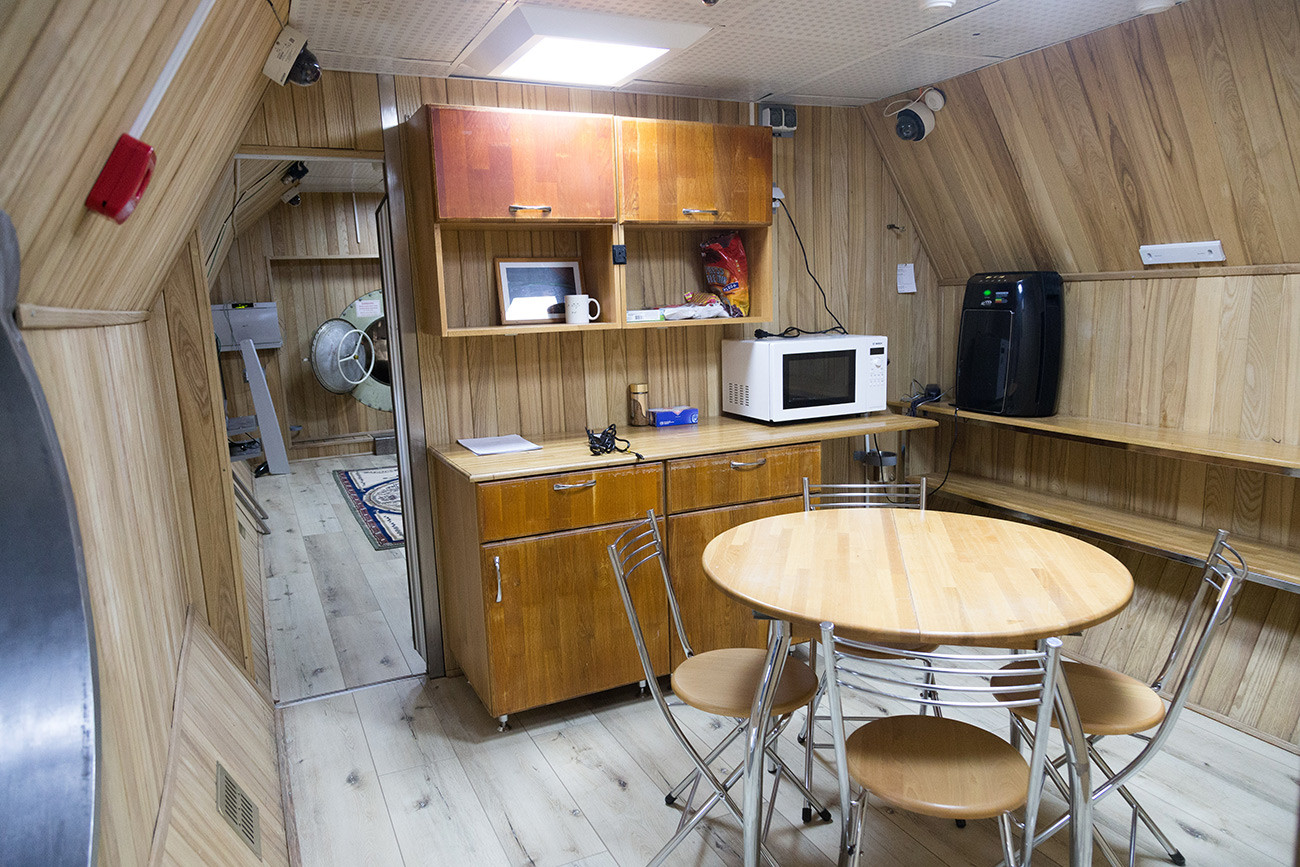 All our socializing takes place, by tradition, in the kitchen over a cup of tea. In space one doesn’t cook, but freeze-dried food is used: You just need to add hot water, and the dish is ready. So, as for equipment, the kitchen only has a big thermo pot and a microwave. Next to an oval table, in the corner, is a small greenhouse, in which dwarf wheat is grown. It is the same as one on the International Space Station.

Five of the six cabins are the same size (2.5 meters by 1.5 meters). The sixth - the commander's cabin - is slightly bigger. The communal room has a passageway leading to the medical module. We often call it the "One hundred" because its volume is 100 cubic meters. It contains a hospital bed, medical and scientific equipment, various wall cabinets and tables along the walls for different experiments.

The biggest module, the EU-250, helps to meet all the crew’s basic human needs. Not only food, but clothes and supplies are stocked here, and there is also enough space for individual physical workouts. Pull-ups on a horizontal bar, boxing, aerobics or yoga - all this is possible in the EU-250. 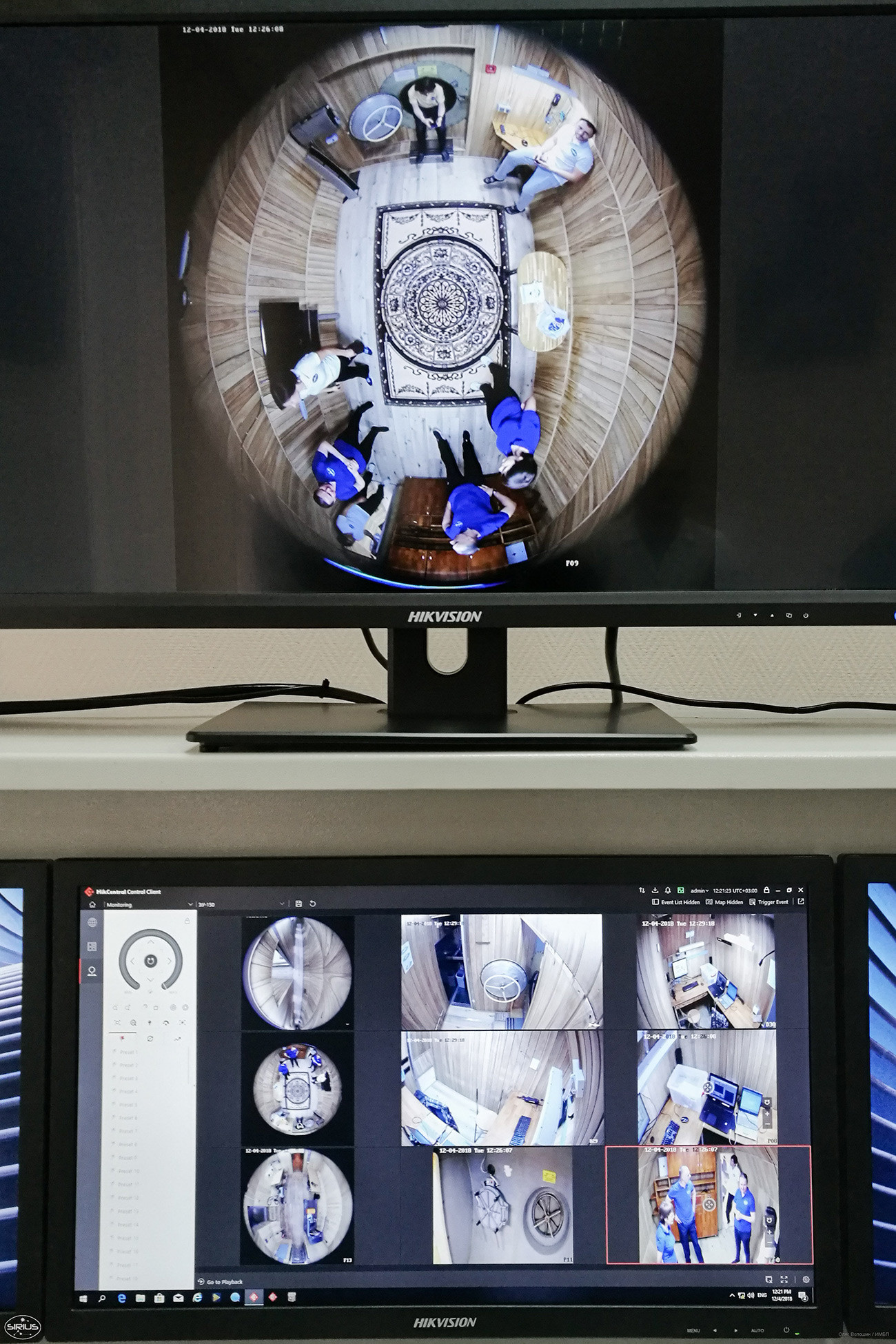 Beyond the storeroom there is a compartment with a greenhouse where various types of salad leaves, onions, sorrel, basil, rocket, lemon balm and wheat are grown. Sometimes members of the crew come here not to collect crops but just to unwind. Sitting with a cup of tea opposite the vegetation bathed in the bright warm light of the luminostat, listening to your favorite music on the player, you are transported back to Earth.

Next to the greenhouse is a simulator installed by RSC Energia (Rocket and Space Corporation Energia) designed to replicate docking with a space station. It consists of a seat, monitor, control panel and joystick, and roughly imitates the design of the Soyuz spacecraft. 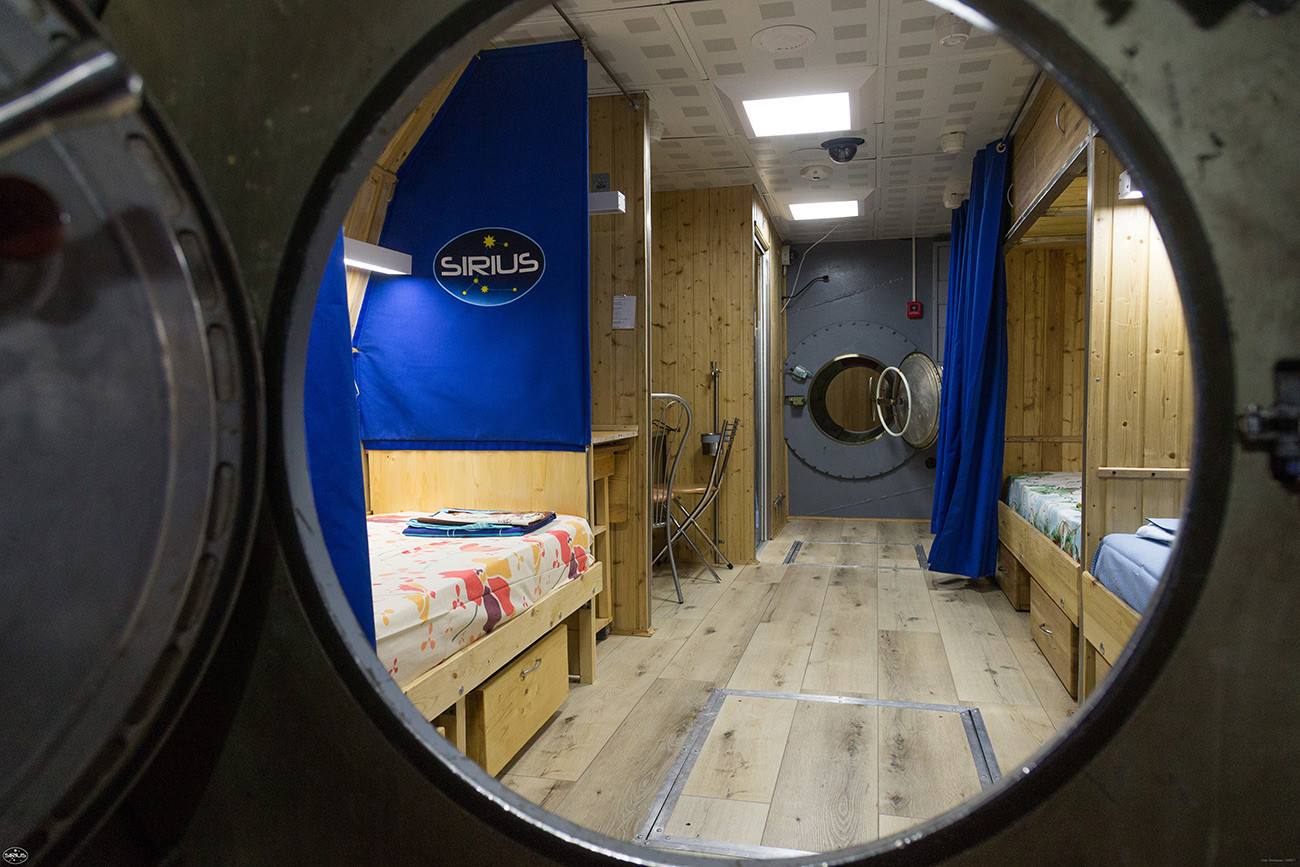 On passing through the greenhouse, you get to a gym where all the endurance training and experiments are held with a view to studying human physiology in space. There are two treadmills that we use every day. They are like a good and bad cop: an active treadmill gives you energy, speed and motivation and lets you unwind. But the passive treadmill has no motors: You have to get it going by pushing off the belt with your feet. It’s like running in heavy boots in sand. No one can do this exercise at the first attempt, so you return to your cabin frustrated. 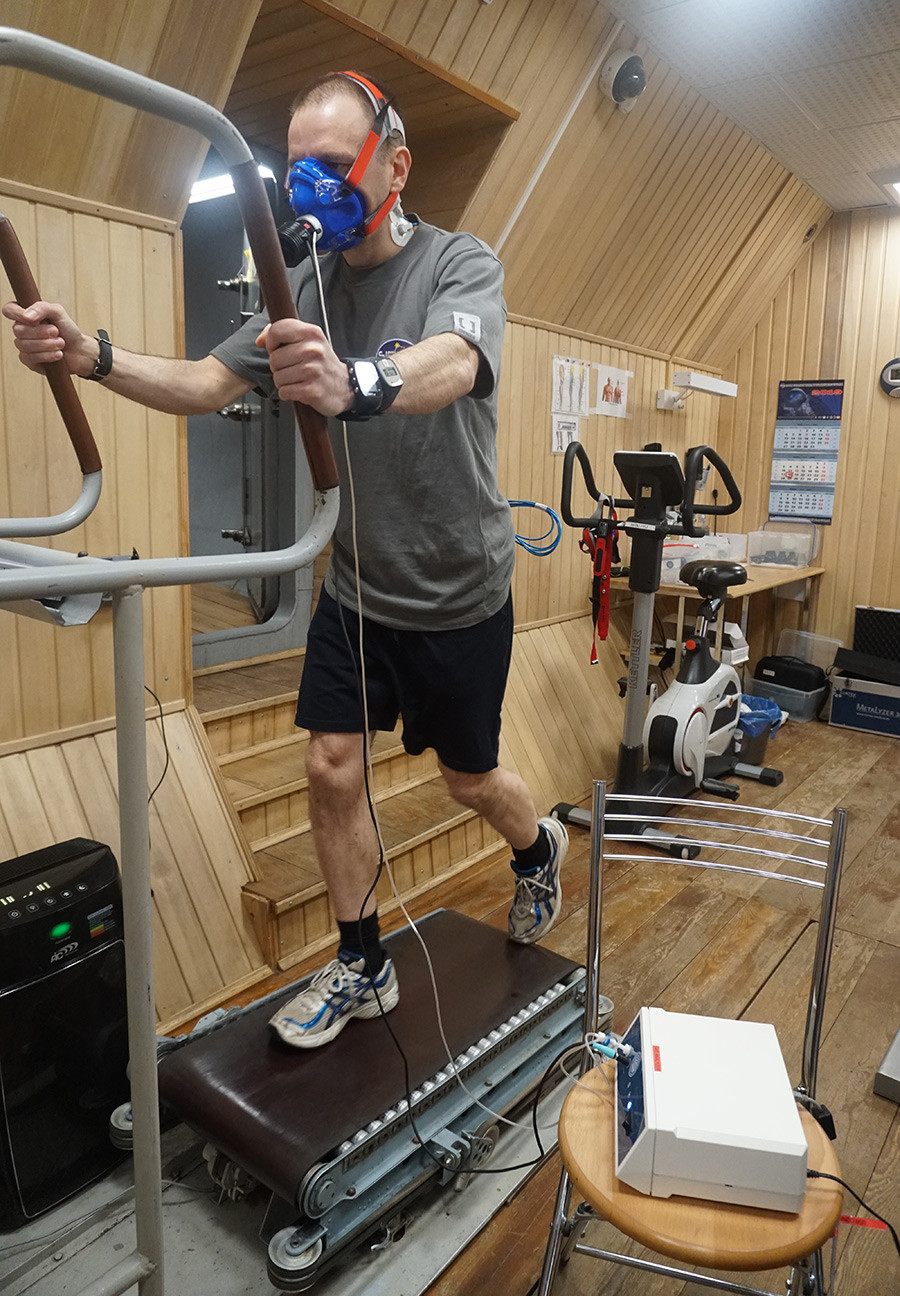 In addition to the treadmills, the gym module also has two veloergometers (bicycles), which we use exclusively for scientific experiments once a month. The final room in module 250 is also the most cherished - the shower room. Once every 10 days we enjoy a proper shower and recall with nostalgia how back on Earth we were able to have one every day.

Parcels from Earth and moon landing

Module 50 is connected at one end with residential module 150, and at the other end with the hangar where the lunar surface is replicated. Once a month, module 50 becomes a cargo ship into which the ground services place food and equipment, all of which - at a given signal, and on opening the hatch - we simply transfer to our station. Afterwards, we close the hatch to the “cargo ship” again and wait for the next delivery. 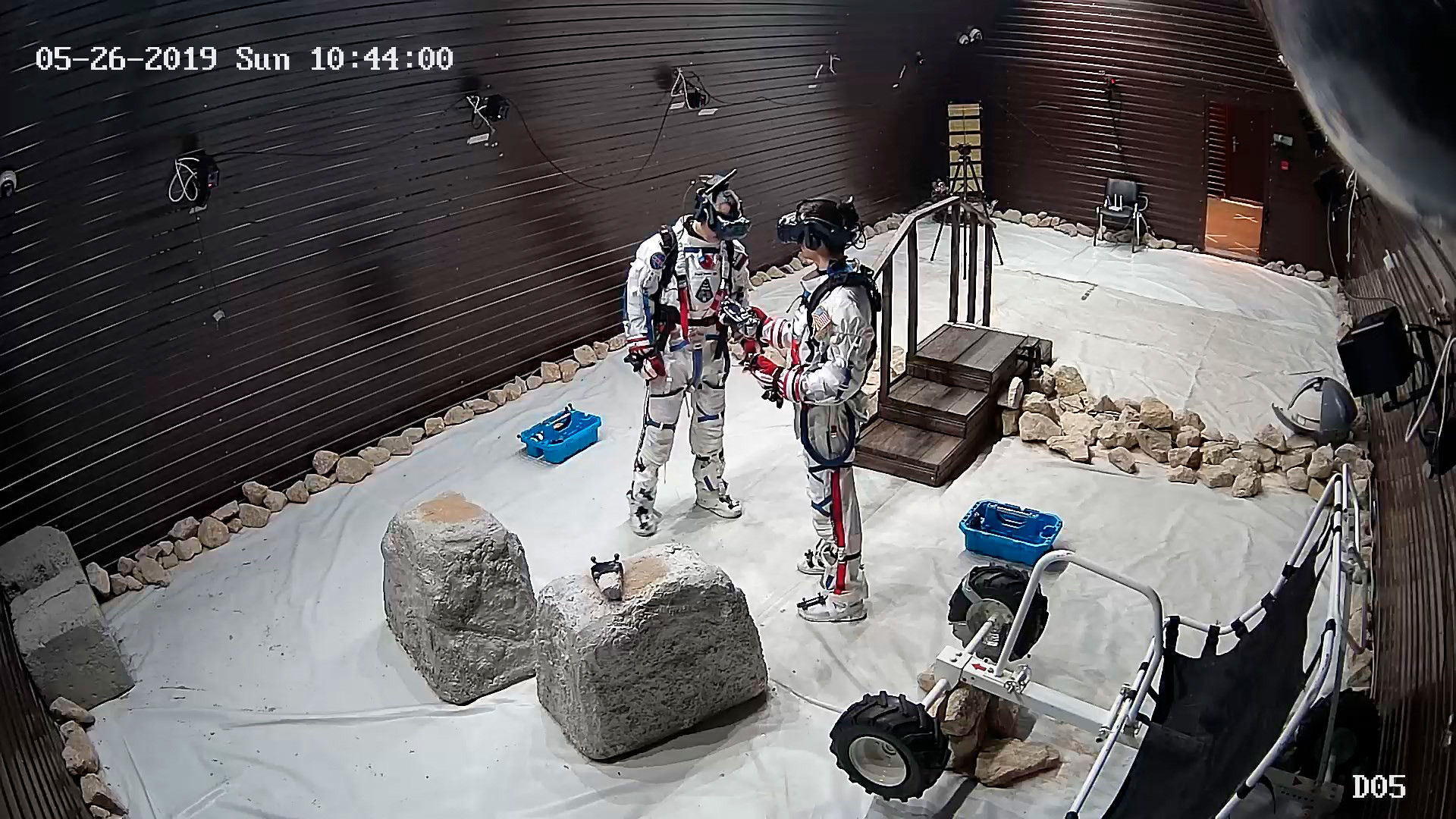 In line with our mission scenario, in the third month of our isolation four members of the crew set off for the surface of the moon. They enter module 50, close the hatch, simulate undocking from the station and spend a week living in 50 cubic meteres while periodically going out into the hangar, or rather onto the surface of the moon, wearing their spacesuits. 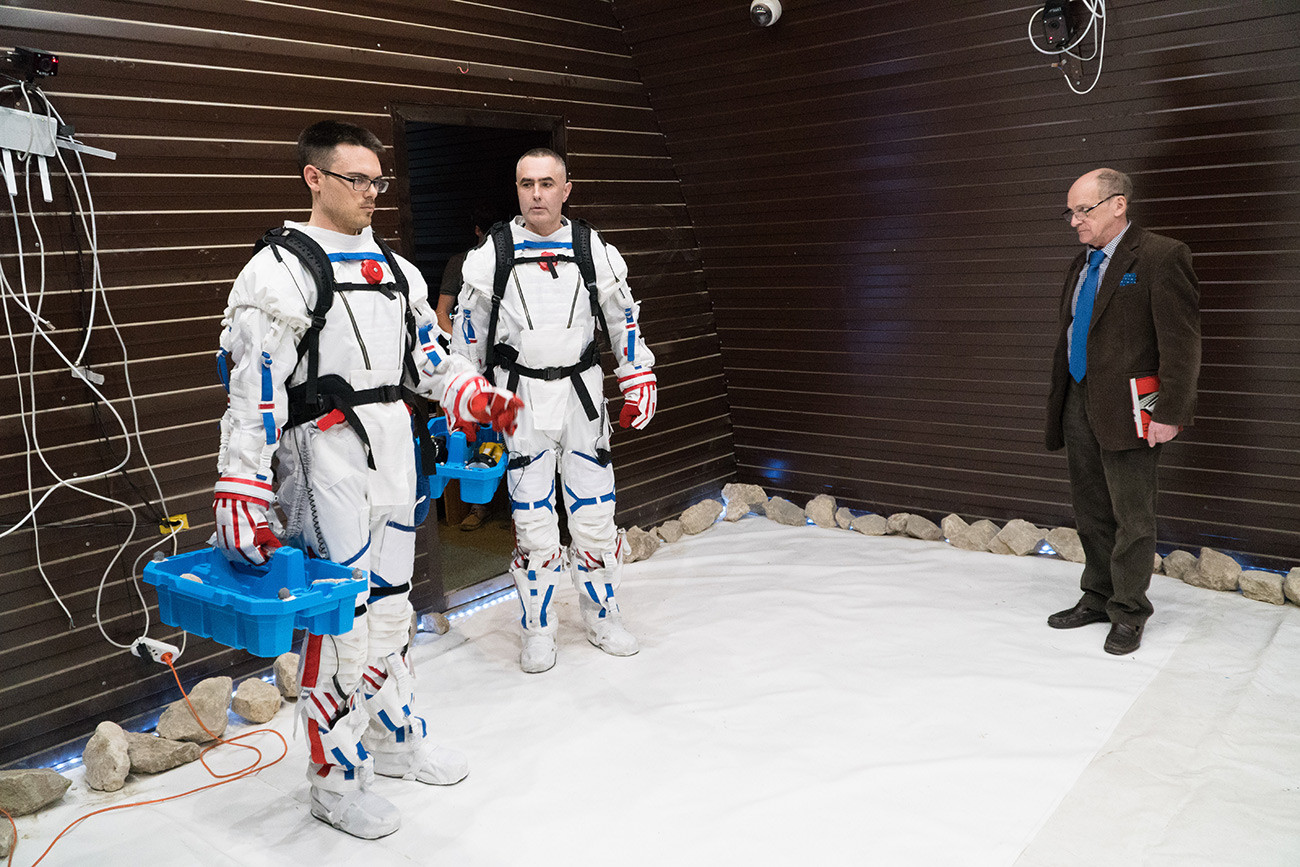 This descent module is fitted with all essential facilities: four berths with screens for privacy, a lavatory, thermo pot and scientific equipment. Crew commander Evgeny Tarelkin and American mission specialist Reinhold Povilaitis took the role of Neil Armstrong and Buzz Aldrin and went out onto the surface of the moon. The simulated lunar surface is a hangar of 80 sq m with elements of virtual reality technology creating a fully immersive experience for the two test researchers. According to the crew commander, it was difficult at times to distinguish the virtual lunar landscapes from the real ones. The cosmonauts not only walked on the moon, but also operated scientific equipment, took samples of lunar rock and repaired the lunar rover. 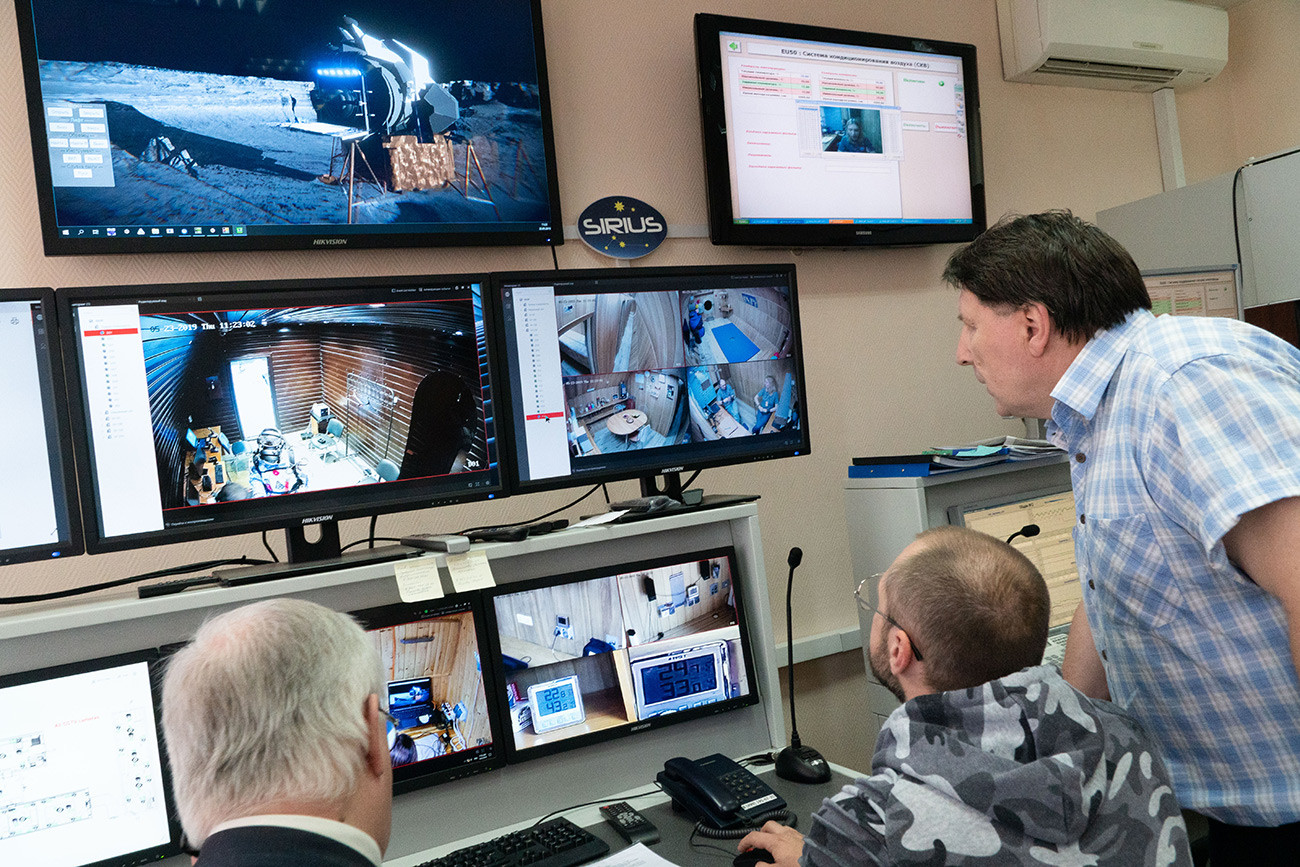 The MARS-500 experiment, which smashed all records for duration, came to an end in 2011, and the NEK facility has been refurbished since that time. A LED biorhythmic controlled lighting system imitating changes in terrestrial daylight was specially developed and installed for the SIRIUS program to promote an optimum psycho-physiological state among the crew. A new digital video observation system consisting of 84 cameras allows scientists and engineers to keep track of the state of the crew and the station itself, and to monitor experiments and remotely assist in carrying them out.

NEK isn’t just a unique station without equal anywhere in the world, but also a very comfortable and secure home for the test researchers.